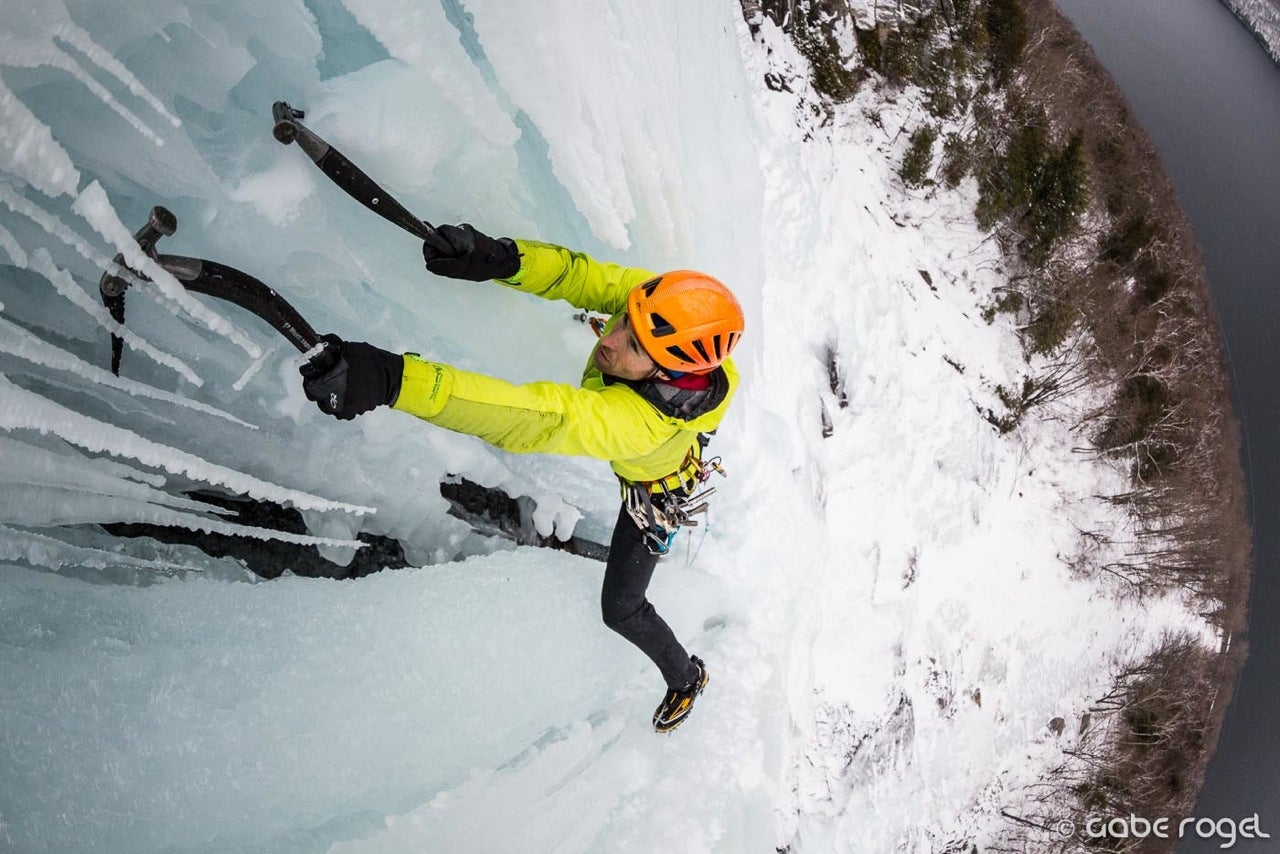 Getting pummeled by ice takes the fun out of ice climbing. Whether the falling ice is generated by another climber or is a spontaneous event, the consequences of being hit are usually the same. Alongside managing the cold, risk management around ice fall is something I spend extensive time assessing, avoiding when possible and managing when necessary. Here are a few ideas for doing just that.

1. Pay attention to where you stand at the base of climbs and where you choose to anchor. Ask yourself, “What’s above me?” That could mean the immediate ice in view, where the leader is headed, as well as the upper tiers of a climb far above you. Often what’s truly above you is nearly impossible to see unless you observe it from afar, maybe on the approach ahead of time. Be strategic on the approach and observe your route from multiple vantage points. Pay particular attention to any other parties mid-route. Be mindful that sometimes the upper pitches of routes come into the sun before the lower pitches and cause them to shed spontaneously on the lower tiers.

2. From the ground, anticipate your climbing route specifically. Consider likely “fall lines” for leader-generated projectiles and how much distance right or left of that fall line is enough to keep a belayer out of the bomb and shrapnel zones. Remember, the longer the pitch, the greater the range of bouncing, exploding pieces. Caves, roofs, buttresses, and columns to position yourself underneath, or behind, can all offer protection.

3. Belay stances should be flat and out of the way—a lot to ask considering most ice climbs start above steep slopes. Consider consequence to a leader, if an unanchored belayer were to slip. Particularly if there are run-out sections on the climb. It’s easy for a slipping belayer to pull a leader off. Leaders and belayers should address this concern together. Anchor a belayer or improve their stance until you’re both confident in their security. Be aware, the same anchor that will protect against a slip can conversely trap them if there’s ice headed their way.

Leaders can go the extra mile and spend the last moment of their lead—before the second leaves the belay—creating create stances or belay platforms. If it’s safe to do so, use a natural stance or improve on the one you’re standing on by chopping a small flat “ledge” to perch on. This will decrease your need shift around or be uncomfortable while your second is following beneath you. Belays are a time to rest your ankles and calves. Take advantage of this time to recover. Don’t be a victim of awkward, uncomfortable belays that YOU built. 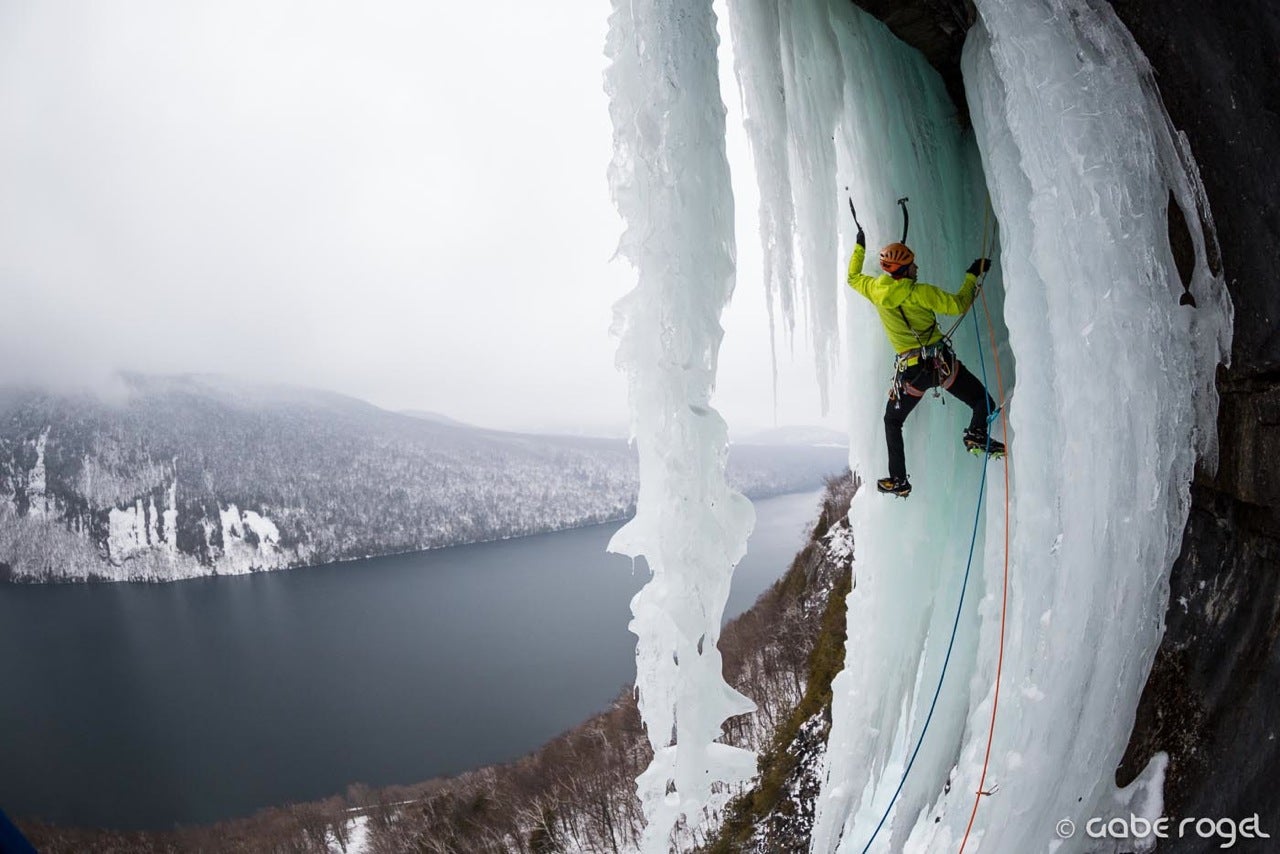 4. Avoid climbing under other parties. Choose variations with different fall lines, climb something else nearby and come back later or on a different day. Plan options A, B, and C. Carry a rack with you that can accommodate the options so you’re not railroaded into a decision by your lack of pro or other resources.

5. When one’s partner/ belayer is well out of the way, it can be a good idea to “clean” old fractures, icicles and fragile structures that might be loosed by the path of the rope or an unconscious backswing of a follower. Or, if a leader must pull through an overhang or around hanging ice, it’s often wise to clear the fringe, superfluous and fragile pieces that you’ll need to work around to continue your intended path.

Usually, pieces of hanging ice are best cleaned from beside or often behind with the leader tucked into a small cave or overlap that the hanging ice has formed over. Sweep small- to medium-sized hanging ice away from your body, “trimming” it. Clean things up with a few swings rather than one large, unpredictable one. Anticipate where the ice is strong enough to be helpful as a tool- or foothold and what’s likely to fail and create a hazard. Cleaning ice with intent can clarify the climbing line and, when done well, makes it safer for subsequent followers.

6. Look up when you hear ice? Or look down and hope? Tough call, isn’t it? I tend to look up if I’m being given fair warning and the leader is more than roughly 40 feet above me. Then I can sometimes shift in my stance to avoid an impact. If a climber is right above me, I find I’m better off to tuck in under my helmet and get as small as possible. When belying, heavier gloves at belays and puffy jackets can protect against smaller ice impacts to a degree, or, at least, decrease the chance of injury. Do your best to hide and protect poorly padded areas like your hands and forearms. Keep them at your sides when you’re resting or the rope isn’t moving, and NOT horizontal where they can be exposed to a direct hit. Avoid exposing your neck or lower back when you hunch in close to your anchor trying to escape. 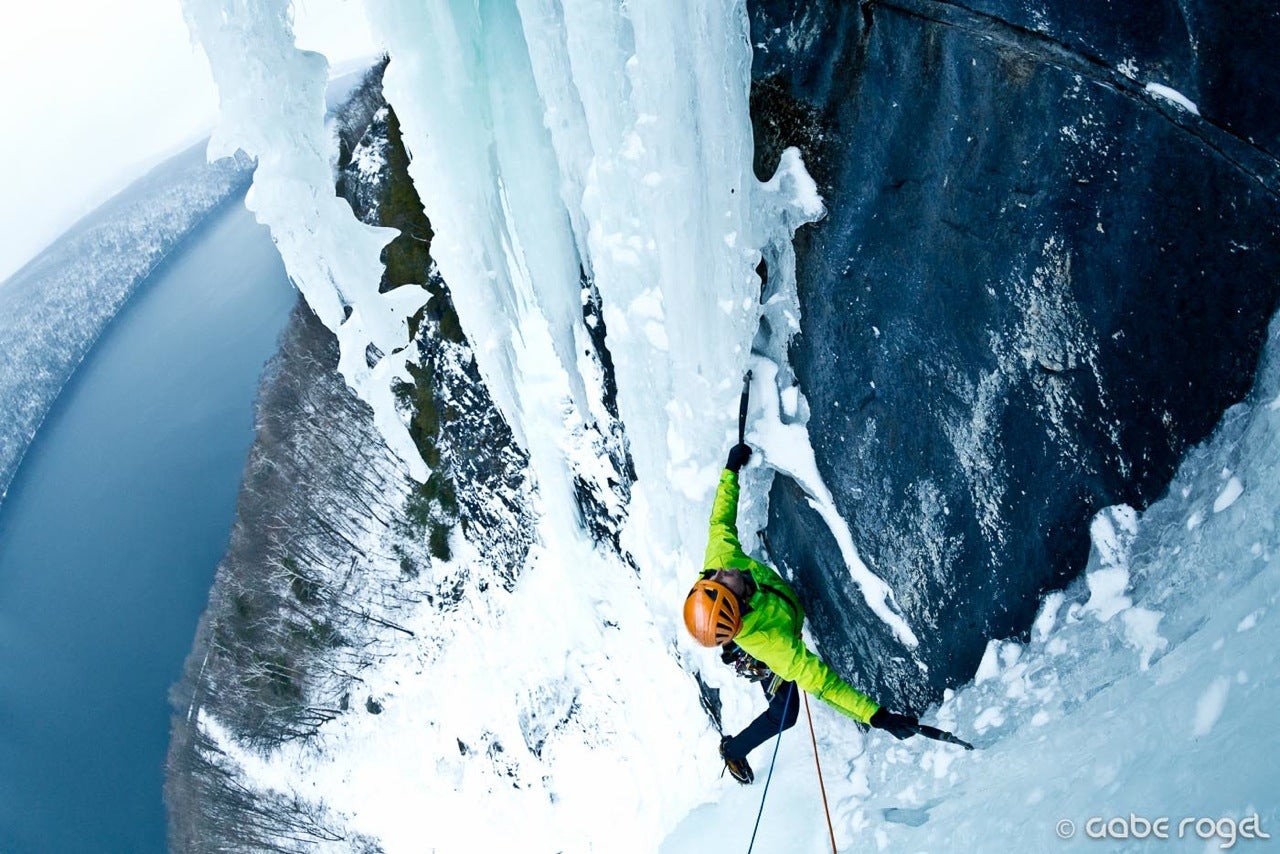 7. Communicate ice fall consistently.  Have a common language around ice fall and expectations. The leader should yell “ICE” if it’s a big piece, if it’s unexpected, and/or it might threaten the belayer, those lower on the climb, even those with their heads down approaching.

8. Read the ice from afar and up close. What are the characteristics of the ice you’re trying to climb? Do you expect it to be fragile? What structures do you see? Candles, cauliflowers, curtains, hanging ice of all forms, ice that hasn’t been climbed? All of these features can contribute to more ice fall and the potential for bigger pieces. Being deliberate with where you swing is vital. Swing into concavities if possible. Vary how hard you swing, small controlled “chipping” swings versus overdriving tools can be effective and save energy.

9. Communicate your plans and intentions with other parties near by. This will decrease confusion and frustration. It should make decisions easier about how to move relative to one another.

10. On large flows, belay well off to the side of your climbing line. A common pattern is to climb fall line and then make a short traverse off to the side of the line you expect to continue on to set the belay. On longer or low-angle pitches, it’s better to move further left or right of the fall for shelter. Follow the same patterns when rappelling. Avoid rapping directly above your partner. Generally rappel fall line and then move off to the side or use a feature for shelter while your partner descends. Discuss potential hazards as the first person descends. The leader on the descent should discuss hazards to be avoided and clear anything that’s threatening with the ropes pulled up and coiled before that person passes the hazard.

If we’re out climbing ice, we’re willing to accept some level of risk to achieve our goals. From any outsider’s perspective, the risk might seem ludicrous—and maybe they’re right. Climbers usually operate in remote areas without the chance of easy rescue or quick access to medical care. We routinely seek places where even small injuries are a big deal. Turning a blind eye to risks that we can actually manage is a bad pattern to fall into.

Climbers as a culture tend to go for it, charging optimistically and enthusiastically. And I encourage that. It’s the quality of doing this blindly that’s worth examining. Some get hit. Some escape with a few scratches, and some even go to the summit regardless. But the process, patience and intent in approaching, assessing, avoiding and managing falling ice pays off. In the long run, you’ll get in more climbing with that outlook.
---
Photo by Gabe Rogel.