7 Ways To Take Your Wildlife Photos To The Next Level 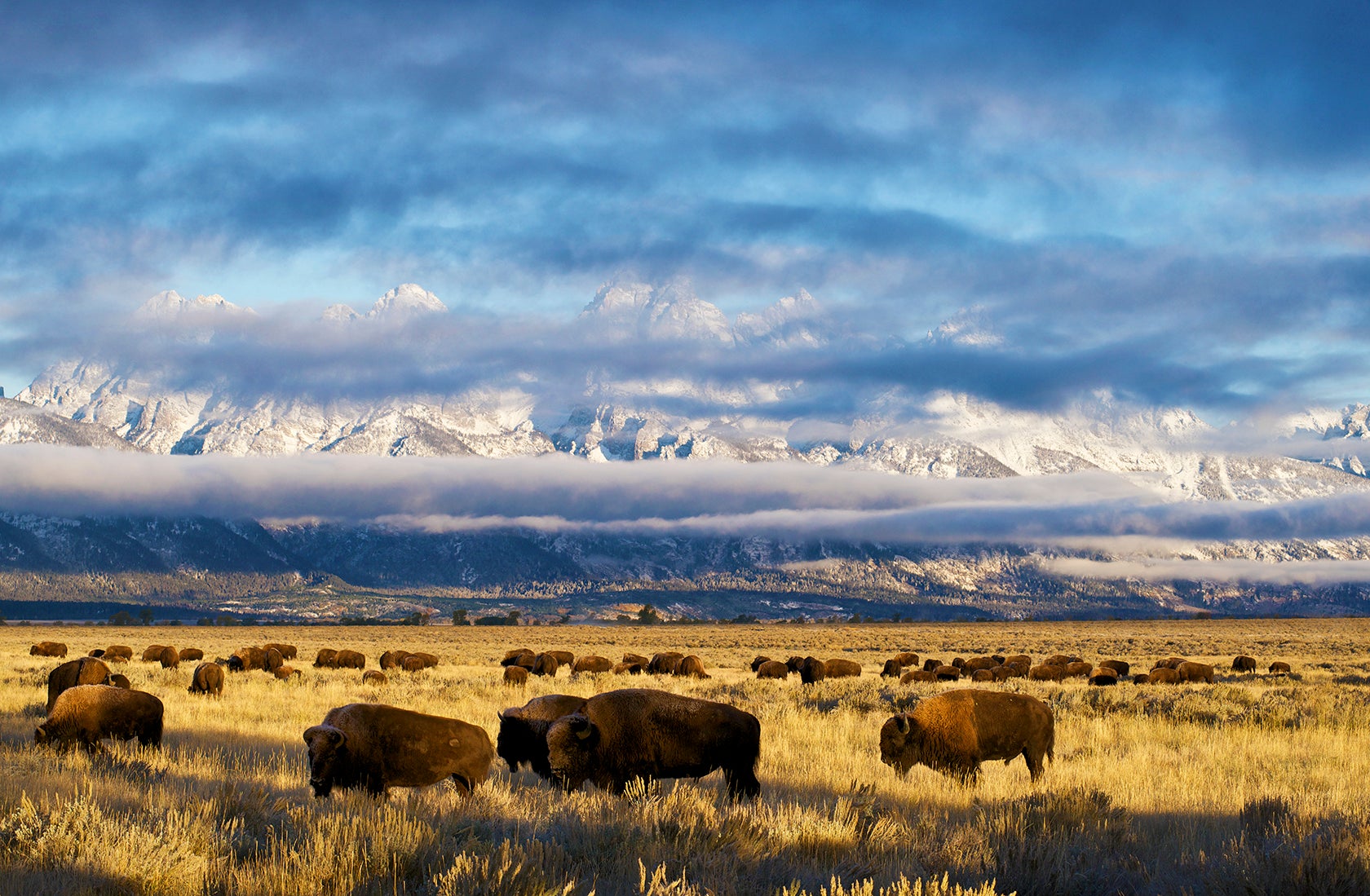 Ever dreamed of being a wildlife photographer? Or, at least, having that elk you ran into on the trail turn out a bit less blurry in your shot? Photographer Dave Showalter is who you want to go to for advice. His new book, Sage Spirit: The American West at a Crossroads, was recently released by Seattle-based publisher Braided River in Association with the Mountaineers. Here, Showalter shares his top secrets for nailing wildlife shots and telling good stories with the images you make. If you live in the Seattle area, you can check out his talk on August 12 at The Mountaineers Program Center – Seattle for more tips and tales.

1. Focus attention on your subject.

When shooting close-ups, make sure you have a clean background and allow more room in front of the creature than behind to give them space to move into the frame. Otherwise, our bird feels crowded. I chose this image because the grouse is in a noble position, with head raised, tail fanned, and fill plumes extended.

And the Greater sage-grouse is certainly worthy of the spotlight. Like all lekking birds, Greater sage-grouse and Gunnison sage-grouse perform an elaborate courtship display for females during the spring mating season. They arrive on the lek (mating ground) in early morning darkness, an open area in the sagebrush, and begin strutting and displaying well before human eyes can see them. Anticipation builds, then suddenly you can see the silhouettes of these noble birds that are larger than a red-tail hawk and smaller than a wild turkey.

This iconic sagebrush-obligate species spends its entire life in sagebrush. They simply can’t survive without large, unbroken expanses of sage—a habitat type which is becoming more and more fragmented by development. Greater sage-grouse are scheduled for a listing decision to determine if they warrant protection under the Endangered Species Act on September 30, 2015. 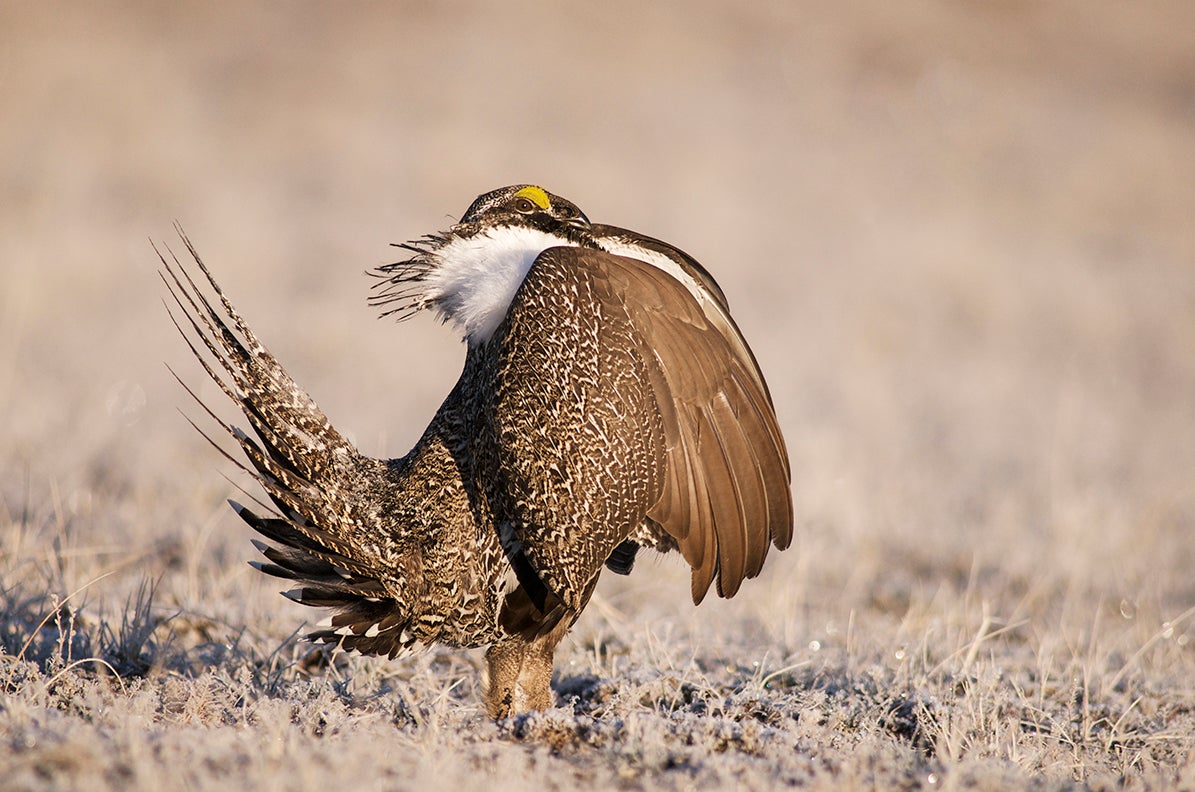 Tools: Nikon D300, 600mm lens, Gitzo tripod. Photographed from a portable hunting blind; I waited until the birds left the lek undisturbed before I exited the blind.

Wildlife photography all too often shows only wildlife. But humans and wildlife are inextricably connected, so why not show us interacting, too? Biologists often handle wildlife for study and I will shoot scenes like this one to add an important story-telling component to my conservation photography.

Here, Dr. Matt Holloran and his team fit a telemetry collar on a Greater Sage-grouse female as part of a study to determine impacts of nearby natural gas drilling. I accompanied Matt and his team in the middle of this April night on the Pinedale Anticline to learn about the study and make images for Sage Spirit. With only a few chances to make these photos, I made a few test shots with the flash output dialed back and the camera set on program - the only time I use that setting. I knew the exposure would be fine and was free to compose this vulnerable bird in-hand, then set her free to return to her lek. Be ready for moments like this, but know when it is inappropriate to approach, handle or interact with wildlife yourself. Leave that to the experts. 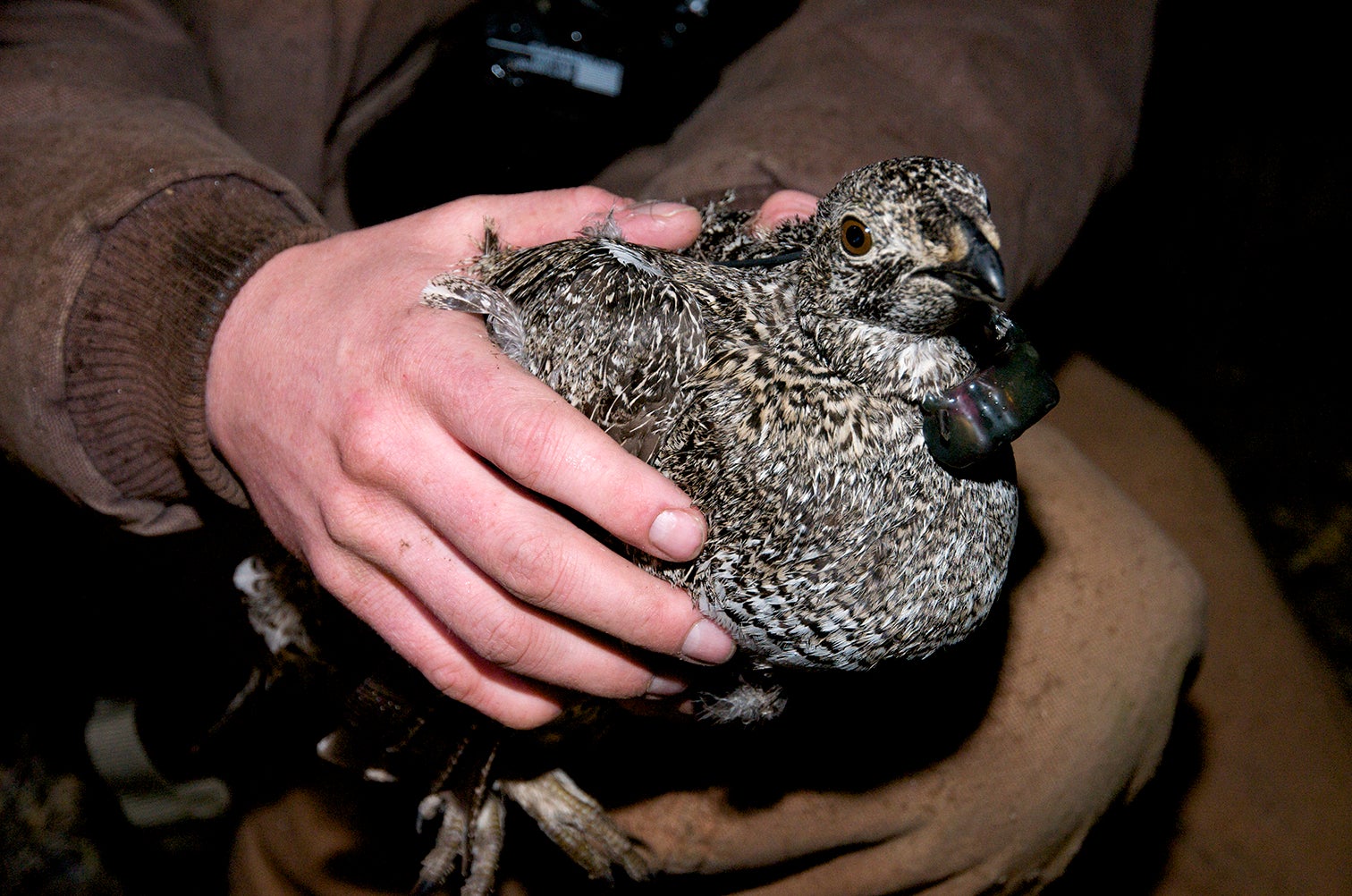 Photographing birds in-flight can produce stunning results, or complete failure. You have to do everything you can to stack the odds in your favor. I made many, many images of sandhill cranes returning to roost in the evening and chose this location for the clean background and predictable path along the waterway. I knew the warm, setting sunlight fell on the birds from my angle of view. I also knew they would drop down to near eye level as they descended towards the evening roost at the end of the flooded riparian area. With the composition pre-planned, I started tracking with the birds well before making the shot, with camera set on continuous focus, and with focus locked on the lead bird, shot a burst until they were past me. Skeet shooting with a lens. It takes some practice and it’s good to practice on birds that are all around us, like Canada geese, which are large and fly predictably. You can also practice on anything that moves - cars, people running. Make sure you make a few test shots and check your exposure before getting into a hot shooting situation. 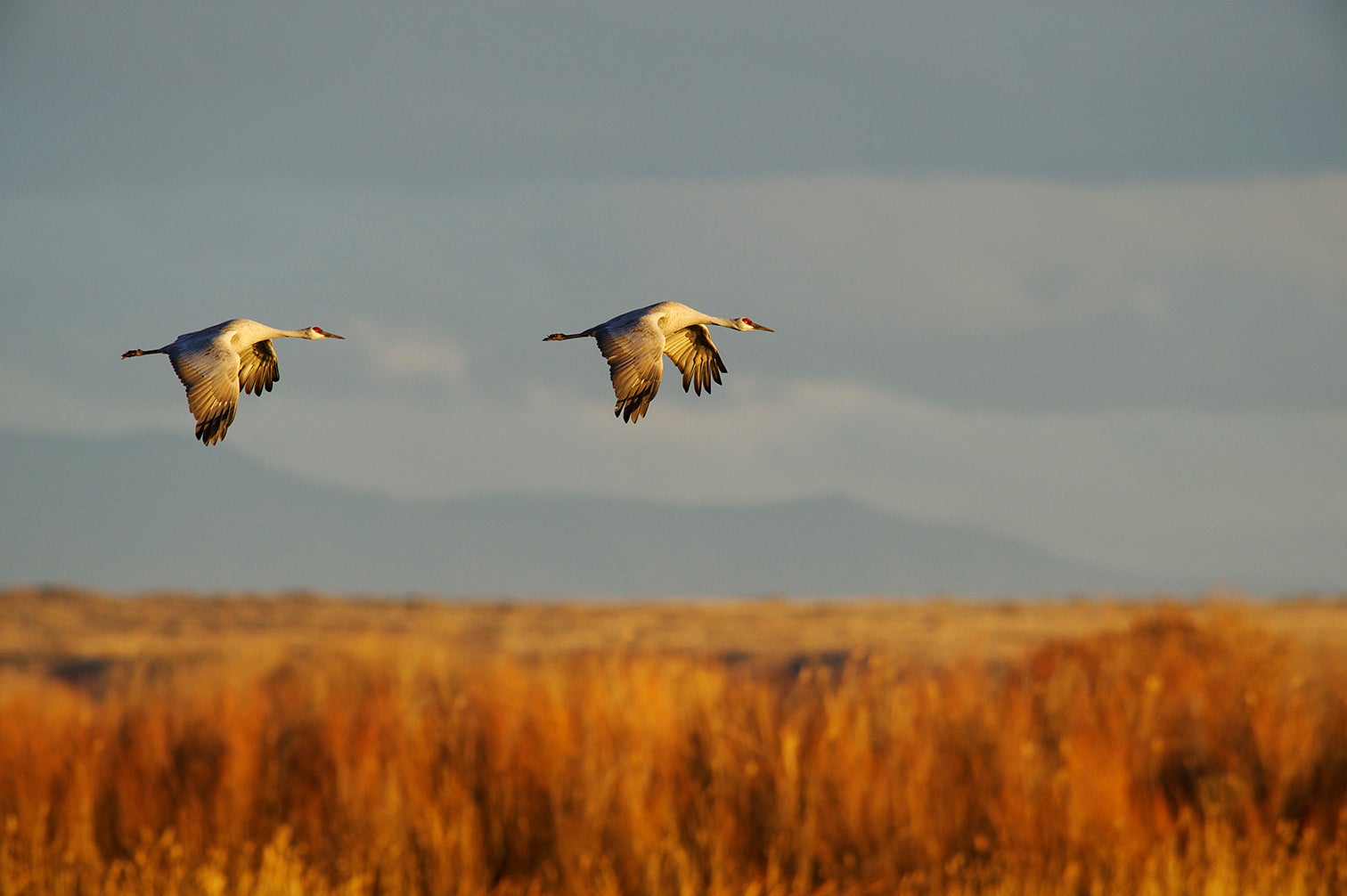 Tools: Nikon D3s, Nikon 600mm, Gitzo tripod set loose for panning. Note: many photographers prefer to make these images handheld and that’s fine if you have a 300mm or 400mm lens that’s not too heavy. Make the decision beforehand whether you’re stopping action or blurring as you track with the birds and set your ISO accordingly.

4. Shoot their habitat, too.

We often associate wildlife photography with massive telephoto lenses to get up super close, close enough to see the eyelashes of a bison. But without habitat, we have no wildlife; and making compelling images of wildlife in their habitat is a great way to tell a layered visual story with a single image. As I was watching the Teton bison herd move across Antelope Flats in warm early morning light, there was a moment with adult bison broadside in front of the herd. I shot a burst of images and they moved. Bison are always moving and this is the only frame that worked. The image shows where they live on these sagebrush flats, with the spectacular Teton Range as a backdrop, and the cloud layers add some mystery and texture. Anyone could make this image with ordinary equipment, you just need to be there when the elements come together and think of it as a landscape photo. Here, the complimentary gold and blue colors with "termination dust” coating the mountains add visual clues of autumn’s transition. Can you feel the chill in the morning air?

A nest in thick sagebrush with beautiful turquoise eggs, a feather, grizzly footprint, bison fur on a cottonwood. The visual clues of the wild all around us make for wonderful photo opportunities and these images, that you catch with your camera or even your phone, will add intrigue to your photo essay.

I made this photograph while working with biologists studying natural gas drilling impacts on sagebrush songbirds, specifically small mammals that prey on nest sites and thrive in human-disturbed landscapes. The sage thrasher is one of three “sagebrush obligate” songbirds, birds that must breed and raise their young in sage. These birds are declining alongside Sage-grouse and sage thrashers will have nowhere else to go if their habitat is lost. Set in this context, this single image showing the beauty of the nest bowl holding fragile eggs tucked in sagebrush tells a layered story.

When you make these intimate images, follow your instinct to add more pieces to the story. Pull back and show where the animal lives, put people in the landscape for scale, and find other species to add biodiversity to your story. For this assignment, I made many photos of the biologists working on site, and was able to photograph adults of each songbird species, the small mammals that prey on them, and other wildlife in the area. It’s fascinating to make so many connections, pulling on threads in a story line. 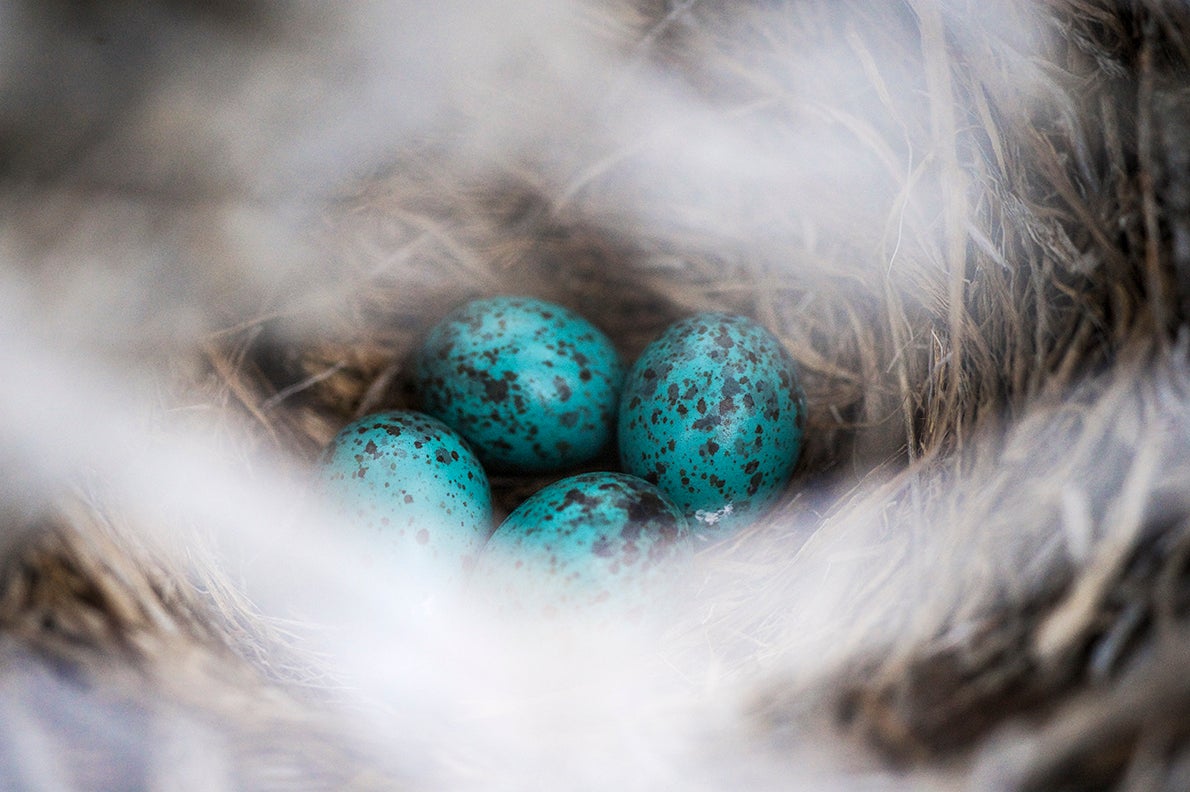 6. Get level with the little guys.

Eye level is often preferred to flatter your subject. To make this image, I got on my belly to be eye-to-eye with the lizard and chose an angle with out-of-focus stonecrop wildflowers behind the lizard. I also wanted to be in shade, because any harsh sun highlights would ruin my plan to show the character of these magnificent creatures. Soft light is great for macro and intimate views of tiny subjects like insects and flowers. Knowing the eye must be in focus and the macro lens wouldn’t give me much depth-of-field, I photographed his face at an angle to make sure his whole scaly face was sharp. This is one of many lizard images made over a couple of days. Don’t settle for a single image; make the best image you can and stay with your subjects, trying all sorts of different angles. Here’s a bonus tip for close-ups: small point-and-shoot cameras usually have great close-up capability. Test your small camera on a flower and see how close you can get with your subject in focus. Get down, get close, be mindful of your background, and enjoy the little things in life. 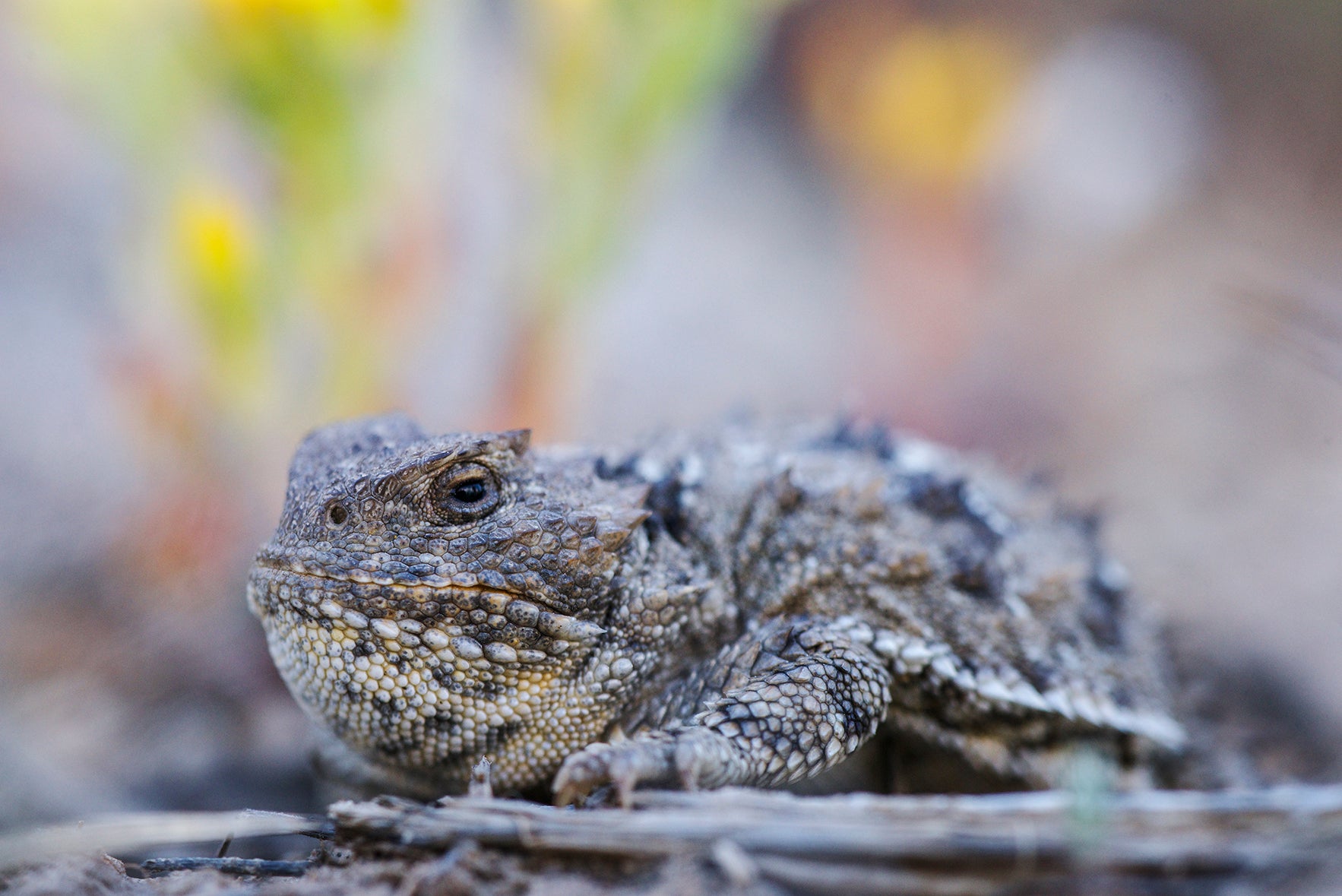 7. Go for intensity, and use a long lens.

We often observe the rule of thirds—which I call “the suggestion of thirds”—placing our subjects in a pleasing place where tic-tac-toe lines intersect in the frame. But there are times when your best bet is place your animal subjects square in the center. An intense stare is one of those times.

Here, the grizzly bear paused while turning over rocks to feed on bugs and larvae, raised his head and looked straight at me. There was no threat, just an apex predator taking a break from his omnivorous feeding frenzy. The left front leg adds a bit more interest: Is he walking towards me? The lower middle was the only logical place for the bear in the frame.

I used a long lens to keep a safe distance and avoid disturbing his behavior in any way; which is as important with grizzly bears as other creatures. Don’t push wildlife, give them space. This bear was chilled out, but why test him? If you don’t have a long lens, find another composition. Don’t worry: a grizzly bear will command attention in the frame.

One more tip: Other than man, the grizzly bear is North America’s top predator, revered, feared, endangered, and the subject of myth and legend. Predators receive more than their fair share of blame for inevitable human conflicts - often caused by catastrophic human error - and there are so many of us in the backcountry. It’s important that we caption our images well and photograph wildlife just being wild to celebrate their wildness! 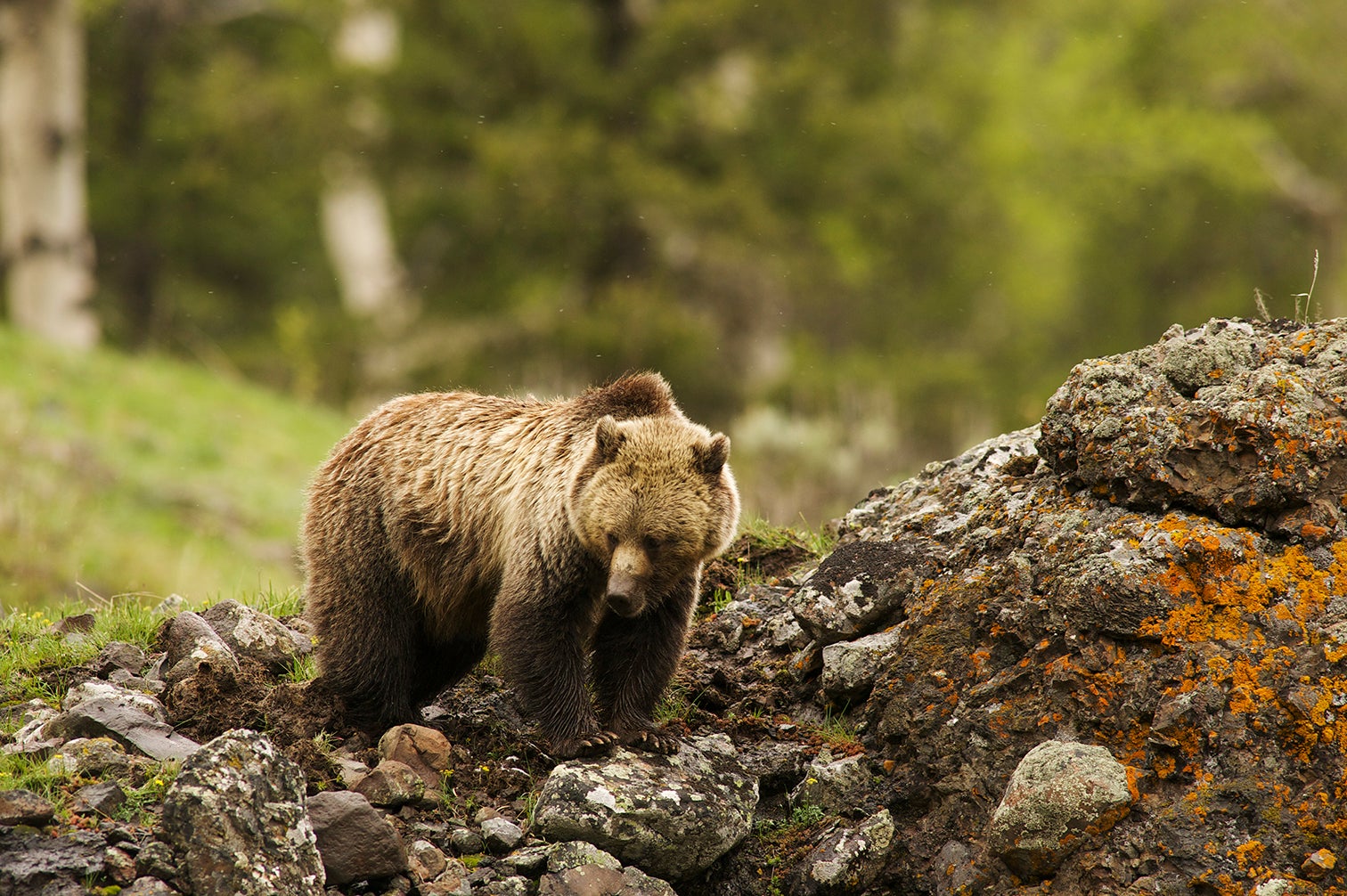