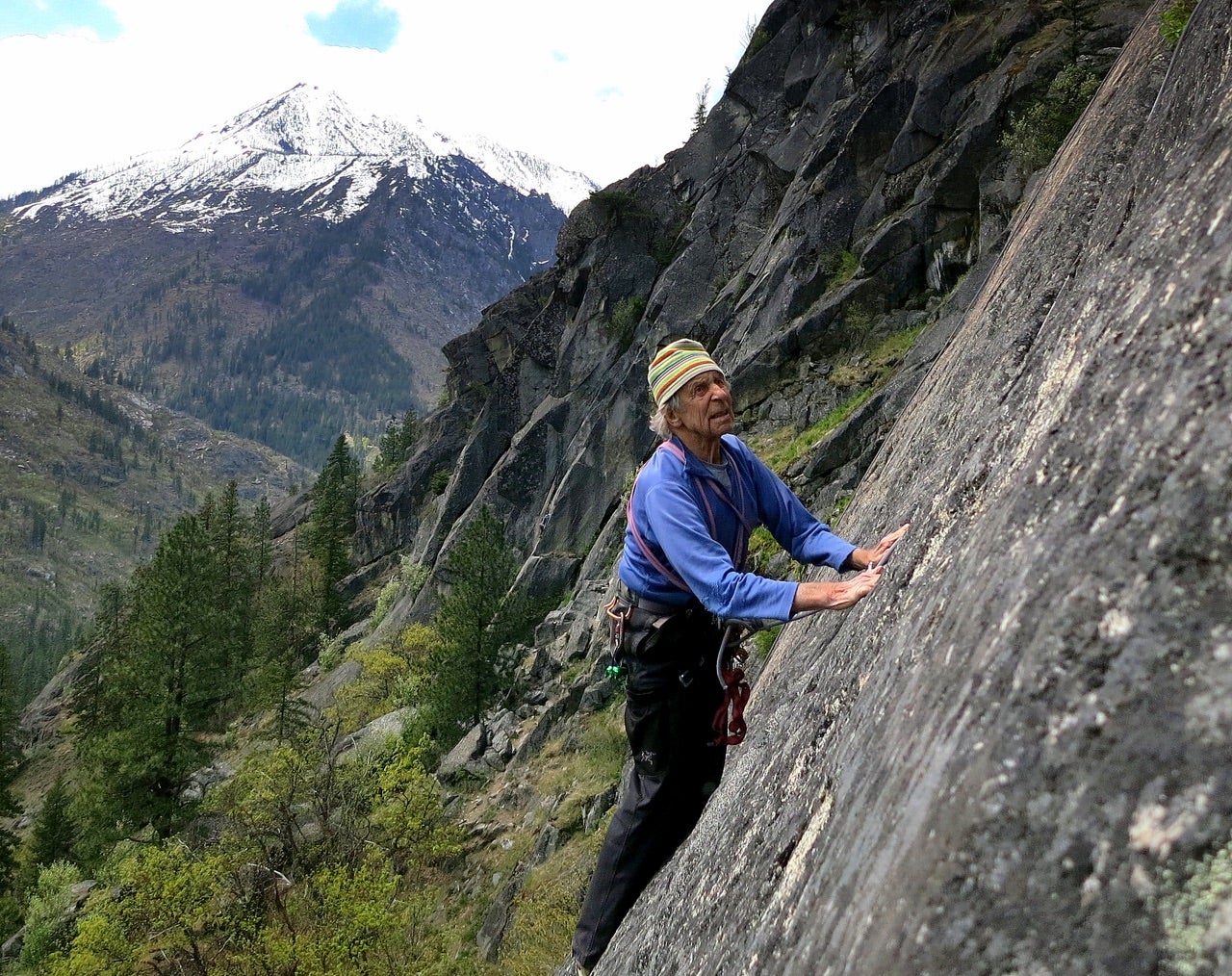 Last October, I was tethered to a tree just one pitch below the summit of Liberty Cap, in Yosemite National Park, when I learned that Fred Beckey had died. I learned it from my wife, back home in Washington State, when I’d called asking her to google the words “how to descend Liberty Cap.” I had no idea how to get down from the dark summit, which loomed a pitch above, but I thought we had our route in the bag. Just a mossy 5.8 slab to go. My friend Austin and I had climbed a recently-freed route named Mahtah on an obscure face high above the valley, because we wanted a shadier, higher elevation adventure to escape the heat and crowds of El Cap. We hadn’t scoped a descent, but hadn’t spent much time scoping the route either. I hung in the darkness realizing that I was only up there, clipped to a manzanita 1500’ off the deck, because of my connection with Fred Beckey. I had just chosen this route on the suggestion of friend I’d met three years prior, while out toproping in Leavenworth with Fred.

I’d lowered Fred down from the wall into a dusty and smiling heap below the slab, listening to him talk about wanting to get back up there and give it another go, when a dark haired solo climber cautiously walked over. He quietly introduced himself as Pedro, and asked in a Spanish accent if that was THE Fred Beckey. Pedro, an alpinist from southern Spain, was fresh off an expedition to Alaska. He ended up climbing and staying with me in Leavenworth, and sharing updates from the Revelation Mountains with an ever-inquisitive Fred. I kept in touch with Pedro even while Fred’s health declined and he never made it out climbing with me again. I stayed with Pedro on a trip to Spain and climbed with him, and again in Yosemite Valley. Pedro had recently suggested that I check out Liberty Cap’s route Mahtah, and there I sat: a pitch below the summit, having flashbacks to a grinning Fred and our initial chance meeting at a roadside slab in Leavenworth. 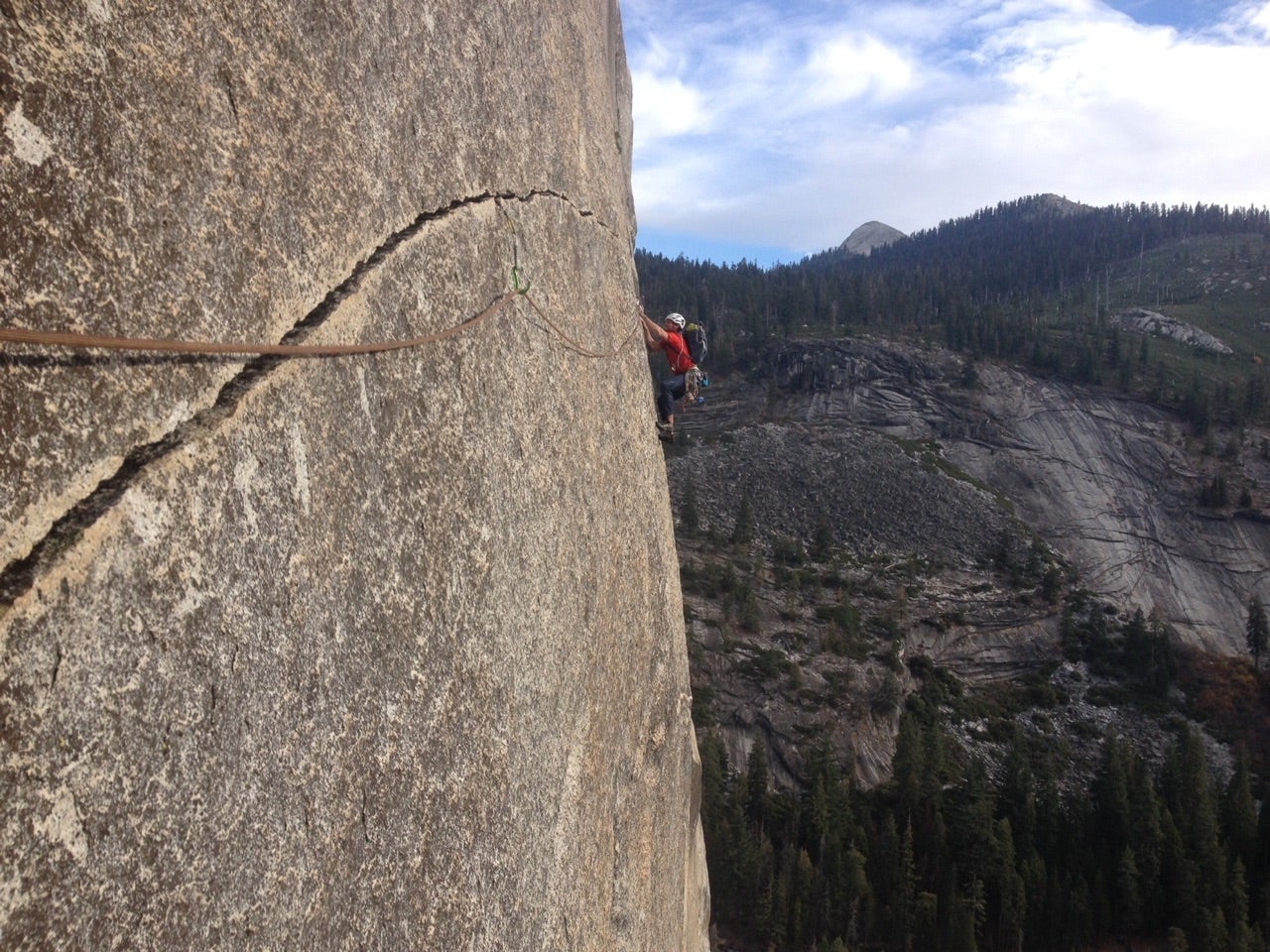 What makes your climbs memorable? What makes them worthwhile? What brings meaning and significance to our days consumed by schwacking through the wet woods, post-holing around mountains and clawing up rock walls? What makes me, in a recent particular case, want to blindly pad up runout mossy slabs in the dark, with more and more damp, grainy granite between me and the safety of that last bolt? The more I climb—having now been at this sport for 13 years—the more I find its lasting value to be not in the climbing, but in the friendships and human connections sparked when the chips are down. When we inspire one another to try harder, learn more deeply, listen more honestly and send something gnarlier than we could have alone, those partnerships transcend sports.

As a full-time nomadic climber for roughly eight decades, Fred Beckey, who died in late 2017, almost certainly roped up with more individual climbing partners than any other human being. Ever. Those partners include essentially every prominent alpine and rock climber in the USA and Canada from the 1930s to the 1990s. His teammates came from around the world and stretched from the era of jingoistically competitive FAs in the Alps to the expansion of plastic walls into shopping malls and rec centers. Fred made, lost and maintained partners through all of it, without ever tweeting or hashtagging the outdoor industry’s trending topics, and despite having zero Facebook friends. Fred’s partnerships were made by actually speaking with other human beings, either face to face or on the telephone. He’d even meet strangers in person at a climbing area, speak with them about climbing, and then just go climbing. In real life! His major climbing accomplishments have been recounted many times, but his full list of partners is impossible to know. His lists of friends, partners, hosts, local conditions experts and sordid couch mooching opportunities were stored across index cards, rolodex files and his encyclopedic brain. His partners would then often connect when Fred didn’t (or eventually couldn’t) keep pace with his own ambitions and frenetic goals. 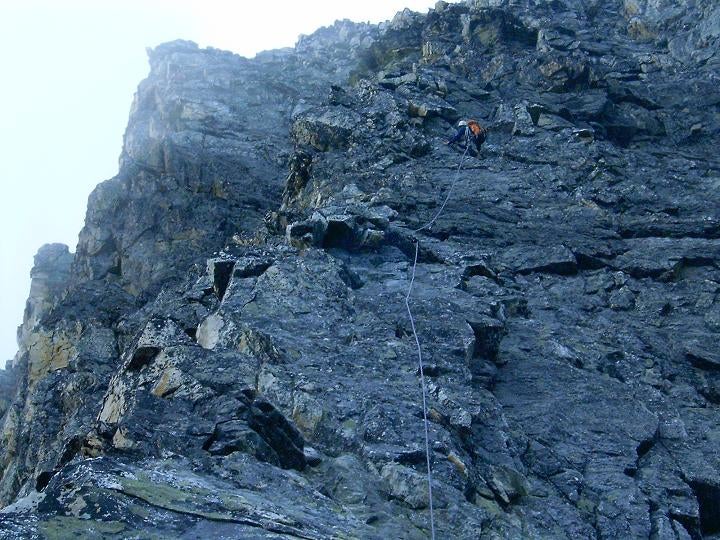 It wasn’t only through Fred’s personal climbs that he created these connections. By writing meticulous guidebooks and magazine articles, establishing outstanding new routes and giving reports and photos to the American Alpine Journal, he inspired countless adventures and friendships among people whom he never met, and who haven’t yet been born or picked up a carabiner. The list of best friends and best days on Beckey routes is only going to grow.

It had already been dark for three pitches of the 14-pitch route when I started up the final slab on Mahtah. But earlier pitches had followed cracks and corners, features to stick your hands and feet into, or to chimney against. The topo showed two bolts on the last pitch, one of which was just a few meters off the belay. The other sat somewhere in the darkness. I’d done very little pitch-black climbing with just a headlamp. Embarking on the slab I realized how much the ambient reflection from snow and moonlight often aided in nighttime climbing, as well as how much it helped to be following a crack or dihedral in order to orient oneself to the pull of gravity. On the blank friction slab, I couldn’t tell what was nighttime condensation, and what was crystalline mineral. Lighter-toned lichen might blur with cleaned off footholds or quartz bumps. And most disorienting was the lack of true sense of straight up and down, leaving little clue as to how steep the slab was, or how my body angle should be. After a pulse-reducing double quickdraw clip of the lone bolt, I actually tried to downclimb and traverse my way out of the situation by circumnavigating Liberty Cap to an easier summit exit, but all I found were more dead ends and my frozen belayer wondering why my headlamp was growing stronger and closer. I explained the situation to Austin, telling him I was pretty gripped but about to go for it. And then I channeled some Fred Beckey try-hard, figuring that he’d probably managed more than one such feature in climbing boots.

Commiting to the darkness above the bolt was a frightening decision. I tiptoed and balanced my way along faint quartz seams and grainy overlaps, stepping with heightened nerves, caution, almost certainly terrible technique. I feared something as simple as a quick high-step would actually topple me over backward for the ride of my life. After reaching a stunted pine on the summit and and letting out a holler of joy, I cheered on Austin and thanked him for the very frigid and very patient belay. Several days later, re-reading the route description, I saw first ascenionist Cedar Wright call that pitch “the hardest 5.8 slab I’ve ever climbed.” That’s hard for me to say, but it was certainly my slowest. I later told Pedro we’d done the route and finished up in the dark. His response was simply “that slab!”

I am glad to have briefly spent time climbing and skiing with Fred, but even more grateful for the friends like Pedro and Austin, connections made through him and through climbing, who inspire me to try hard and who support me, even when I get gripped on the easy pitches or lose my way in the darkness.