A Blitz Up The Fitz 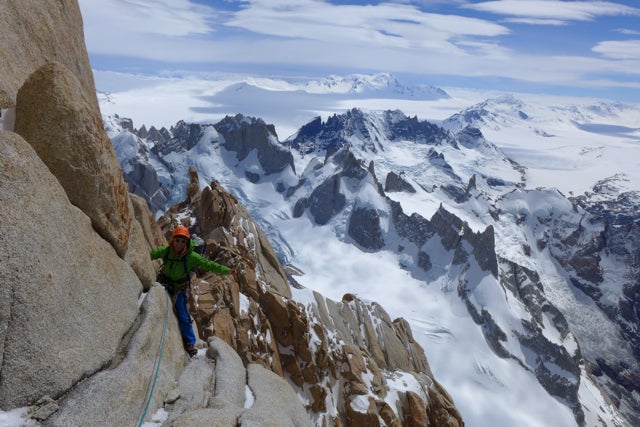 I like to be efficient. Don’t get me wrong, I waste plenty of time surfing the web, studying guide books, Facebook, the several attempts it has taken me to write this blog… But, as a general rule I strive for efficiency. Being a parent has made my quest for efficiency more pronounced and at times even fanatical. As much as I love spending time in the mountains and climbing, I spend a lot of time training so I can do things faster, more efficiently and spend less time there. Ironic, I know. In part, this is a big reason I have fallen in love with the Alps. Lifts make access easy and approach times are normally only a small part of the equation. It is entirely plausible to climb a world class route in between dropping off and picking up my daughter at daycare.

I’m not arguing that this is how climbing should be, and I’m the first to point out that while places like the Alps have so much to offer, perhaps something is lost as well. I think about Mallory’s first expedition to Everest and the months it required just to get in position for an attempt to climb. More locally,  think of Whymper’s exploits on the Matterhorn walking back and forth from Cervinia to Zermatt just to round up a climbing team. Just the “approaches” that these pioneers endured seem to put any of my climbing accomplishments to shame, let alone considering their commitment.

As much as I love the availability of the climbing in the Alps, I still find myself searching for a little more adventure. Well, once in while, anyway. This past November, that quest for adventure brought me to Patagonia. Seven years ago, I traveled to Patagonia on a climbing trip/honeymoon. Our trip was anything but productive. The standard fare of bad weather and bad conditions had us packing our bags and cutting our five-week trip short after three weeks. I left frustrated, overweight and vowing never to return. The only positive outcome of the trip was that my wife and I remained married, but after three weeks spent in a tent, we certainly had our moments.

Patagonia and efficiency don’t often go hand and hand. Bad weather, long approaches and lots of travel can all add up to a lot of sitting around, a lot of walking, little climbing and a lot of frustration. After one unsuccessful trip, I had mentally prepared myself for the worst, but was hoping for the best. I arrived with my partner Tomaz Jakofcic—a highly regarded hard man from Slovenia, which means a lot as seemingly everyone I have met from Slovenia is a gifted climber or Alpinist. We arrived around midnight and woke to sunny skies the following morning, which helped us shake our jetlag. We wasted little time getting our gear sorted and by early afternoon we left town for the hills.

Before heading out, several other climbers had warned us of bad conditions up high, but with a decent forecast, we headed up to cache gear if nothing else. Hiking up to a camp on the west side of Fitz Roy, I had very low expectations, which I have learned is a sure way to avoid disappointment. For me, an ascent of Guillamet, one of the easiest summits in the range, would be a success given my previous experience in Patagonia. However, with clear skies dominating the evening sky, Tomaz had insisted that we try for Fitz Roy the following day. After a moment’s hesitation, I was all in, knowing that we needed to take advantage of any opportunity we may have. With that, the alarm was set for 12:30 a.m., giving us only a few hours of sleep, but with jetlag and excitement in the air, getting up would not be a problem.

We awoke to clear skies and were soon on our way. With our hasty decision to go for this climb we left camp with around four bars each and no topo. Ahead at the Paso Cuadrado, we saw another team leaving for what could only be the same objective. The approach went smoothly with good travel conditions and soon we had caught the team in front. When I approached the climbers, I recognized a familiar jacket and began laughing. As it turned out, the two climbers ahead of us were two good friends and fellow guides from Switzerland. I had heard they might be coming to Patagonia, but meeting them here in the middle of the night was quite a surprise. We exchanged greetings, shook hands and were soon heading up the initial couloir of Fitz Roy’s Classic Super Canaleta together.

The climbing on the route was really top quality and certainly as good as, or better than, any of the classic “grand courses” I have done in the Alps. It was continuously interesting while never being too hard or too easy. We made steady progress climbing as two teams of two, and having some company on the route also helped keep the mood light despite some temperamental weather. About 12 hours after crossing the bergschrund, we were standing on top of Fitz Roy, which incidentally marked about 72 hours after flying from Geneva. It was a dream come true for me and the fourth time for Tomaz. It was great to be up there with three good friends while seemingly nobody else was climbing in the range. Our descent down the Franco-Argentine route was without incident as Tomaz, with some familiarity of the route, led all the rappels. After crossing the Bergschrund, my alarm sounded again marking 24 hours on the go; nonetheless, we were still feeling good and happy to carry on. But despite a smooth climb and descent, our luck was running out.

As we descended to the glacier on the east side of the peak, the snow conditions deteriorated and soon we were knee deep in snow. To make matters worse, most of the snow had a crust, making travel slow and tiring. Tomaz and I decided to head back to our camp via the Guillamet pass while the others descended directly to town. With stormy weather and exhausting trail breaking, we gave up on our plan after a couple of hours and were forced to backtrack, wasting a lot of energy. In the end we followed where others had gone and made our way down the Paso Superior. We descended through the night only to stop for a quick nap at sunrise. By noon we were back in town, content but exhausted.

Climbing Fitz Roy straight away during our trip was like eating dessert before the main course; it tasted so good, but the rest of the meal was less appreciated. We made the most of our remaining time sport climbing, eating steak, making trips to the gelateria and spending way too much time looking at weather forecasts. We had one failed attempt during week two and did manage to climb Guillamet just before we left, but that still left a lot of time hanging around town. While rest days in Chalten are quite comfortable, this was the hardest part of the trip for me. I hate down time sitting around waiting to climb, talking about climbing, and there is simply no way to avoid that in Patagonia. But when life is going 100 mph juggling guiding, parenting and personal climbing, this down time sounds so good. It’s one of life’s great conundrums I guess.

Before leaving for this trip I made a pact with myself: If I got shut down from climbing, I would never take another trip to Patagonia and think of the time, money and frustration that would save in the future. But with some success, I can already sense a slight nag to return. I still struggle with the inefficiency of expedition-style climbing, but that uncertainty draws me to the mountains time and time again. While satisfying, I don’t remember many details of routine training missions, but having success on a trip is something that sticks with me for years. So, whether or not I make another trip to Patagonia, I’ll continue obsessing about efficiency, about training, about climbing. But our quick blitz up the Fitz is a memory that I won’t forget anytime soon.