A Bold New Line In Alaska By OR's Peter Doucette 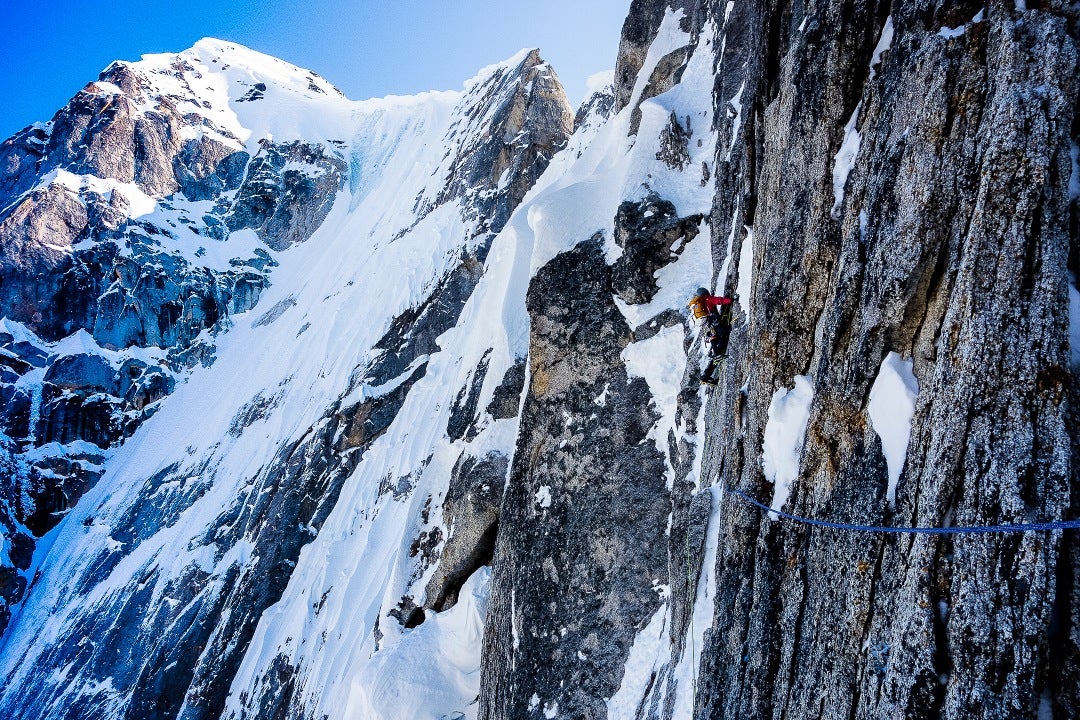 I’m just back from Alaska where Silas Rossi and I established a new climb, Twisted Stair (V WI6 R/X M6+, 2300’) on a satellite peak of Mount Johnson. We flew into the Ruth Gorge on April 10th with the goal of climbing something and not sacrificing too many fingers and toes. Still in the grasp of winter, day and night time temperatures were frigid, ranging from 0 to -35°F during our first week. Maintaining our psych, we bided our time skiing and scheming and waited for a bump in the mercury. We attempted routes on Mount Bradley and Dickey with excellent climbing and good weather, but nothing we were able to finish either due to mega-snow mushrooms or other objective threats. Ten days into our trip, we headed for a line we’d spied last season between Mount Johnson and Wake.

Twisted Stair climbs a clean and obvious line direct to the summit of the 7500’ peak in the back of the east-facing Johnson/Wake Amphitheater. We started in the same chimney system as The Ladder Tube, (3,000 feet, V 5.10R A3 WI4+R M5 Fumitaka Ichimura, Yusuke Sato, Tatsuro Yamada ’07) splitting right from its first pitch to climb what we believe is entirely new ground. Reaching the toe of the route requires broken, arduous glacier travel and affords unflinching perspective on Johnson’s north face. The site instills a feeling equal parts awe and intimidation and includes the rare close-up view of The Elevator Shaft (Tackle/Chabot ’95).

We climbed and descended Twisted Stair April 20th and 21st, with one snow cave bivy below the crux smear. We rappelled, with few variations to our line of ascent, from many v-threads and stoppers under a clear night sky and moon shadow. The ski back to our camp below mount Dickey ended at hour 49 on April 22nd. We were inspired by the quality and sustained nature of the climbing. We found many physical and committing “blue collar” Alaskan pitches — one right after the other. Bergschrund to summit cornice, there was little reprieve as we navigated steep snice, sporadic mixed terrain, and a dizzying and delicate WI6 R/X crux smear at two-thirds height. We left Alaska grateful, with more projects in mind for next season and the same number of functional fingers and toes with which we started.

Silas and I would like to thank Sterling Ropes, Outdoor Research and Brooks Range for their support on this expedition.