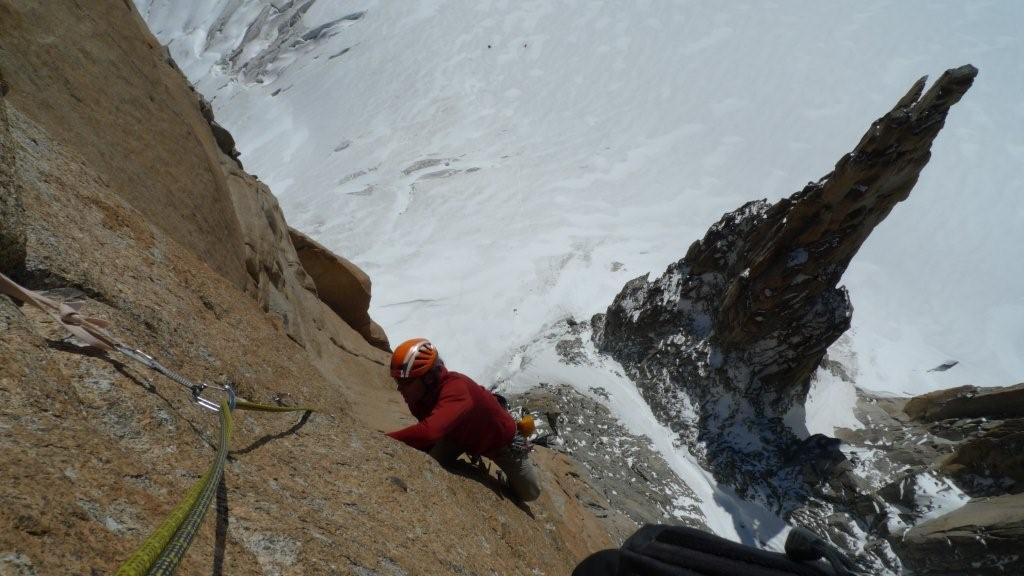 In the guiding business, summer is a busy time.  The old adage “make hay while the sun shines,” is a motto that most guides I know live by.  It is not uncommon to work 20-30 days straight or even more.  Nonetheless, no matter what the profession, we all need a break and some time off.  Some people like sandy beaches and umbrellas in their drinks, others prefer cozy cabins and reading by a fireplace.  Ironically, my “get away” from guiding in the mountains usually involves going back into them…

Our trip began at the Torino Hut on the Italian side of Mont Blanc.  Located at around 3,600m this hut allows quick access to the Grand Capucin one of the most acclaimed formations for rock climbing in the Massive.  After a good Italian meal and restful night of sleep, we set out at sunrise intent on climbing “Voyage Selon Gulliver”, a 400m route up the heart of the formation.  This route was a break through when first established in 1982 and is still said to be one of the most classic lines in the range.  Thanks to the lift systems in the Alps, the approach to our route was a mere one hour stroll across the glacier.  We left the hut right at dawn despite high winds and cold temps.  Upon arriving at the south facing wall however, the wind had died and the sun was already warming up the orange granite.

Indeed this route was a classic.  A mix of face climbing connecting brilliant crack systems takes you more or less right up the center of this magnificent feature.  This “mostly free” style is something I’ve grown increasingly fond of especially during the summer when my legs seem to grow and my arms shrink.  In the end, who cares, as long as you’re enjoying yourself?  In the end, that is exactly what we did.  We moved quickly up our route and made it back well before the last lift.

Yet, had I known this route was merely a warm up for what was to come I probably would have tried to slow the day down and miss the last lift. After our climb we enjoyed a cold beer and discussed the following day’s options.  Bertrand had heard of a route on the Italian side of the range, “Etoiles Filantes” on the Tour des Jorasses.  This route, located  on the southern shoulder of the famous Grandes Jorasses,  was likened to the Grand Capucin but much more remote and “sauvage” (wild).  He figured that since I am American, the long approach and likely no crowds would be right up my alley.  Maybe I’m getting soft, I’m not sure, but there is a reason why I spend so much time in the Alps.  I really like to spend my time climbing rather than approaching and the lift infrastructure in the Alps makes this very easy to do.  Nonetheless, after another cold adult beverage I was easy to convince and, sometimes,  it is good to approach the old fashioned way; by foot.

Day two didn’t begin quite as leisurely as our fist day had: our predawn start was followed by a 1700 vertical-meter gain to reach the base of the route .  The approach is steep and involves some interesting glacier navigation and, to top it off, one of the biggest seracs in the entire massif looms above the valley you ascend.  Three and a half hours later we were at the base of the route and the real fun was only just beginning:  450 meters of granite awaited us.

The route we chose for the day was indeed a classic, but also quite sustained.  This route, established by Michel Piola, perhaps one of the most prolific route setters of all time, takes a brilliant line up this majestic feature connecting crack systems via some very improbable slabs. Piola is known for his mastery of slab climbing and it seemed that he was in his prime when he created this gem.  Bolts that were placed were done so quite conservatively, especially for Alps standards, that the climbing was quite engaged and committing.

Sometimes while rock climbing, things just work out; the last piece of gear left on your rack is precisely the size you need, you find that key hold right in the nick of time, or in this case, I ended up with the pitches that suited me best with no premeditation (read: more gear, less scary).  As it turned out on this route, Bertrand ended up with the hard slab pitches while I managed to get the hard crack pitches.  Fortunately for me, I enjoy crack climbing and probably have the most experience with that, but on the other hand, nobody likes hard slab climbing.  Bertrand, however, pulled off the difficult slab pitches flawlessly and our day went very smooth.

We managed to get up and down the route and back down to Courmayeur in time to enjoy another nice Italian meal.   After our 14 hr day and logging nearly 900m of granite in the past two, it was time for Bertrand to go back to work.  Myself however, I still had two more days before I started working and the weather was still beautiful.

After a rest day, my wife joined me for one final mission.  We chose a 300m route “La Reprise” on a formation known as the Flamme de Pierre noted as being a stunning crack climb.  Our day began with a train ride and then required about an hour and half approach complete with descending a long series of ladders, crossing a glacier, ascending a long series of ladders, some steep hiking, an alpine meadow and a partridge in a pear tree.   Once again, the granite in the Massif did not disappoint.  The climbing was continuously steep and sustained up beautiful corner and crack systems with a backdrop that could not be beat.  And, to top it off, there were no arguments ending in shouting or crying during our climb (okay, only someone who has climbed with their spouse will find this amusing).

We intentionally only bought one way train tickets as we figured we would miss the last ride down.  However, after rappelling back to our packs, we had exactly one hour to catch the train so decided to give it a try.  With a combination of running and speed descending/ascending ladders we arrived sweaty, tired but  just in time to catch the last train.  A fitting end to a brilliant week of exploring some of the best granite in the range, physically exhausted but mentally refreshed to start work the following day.