I went to Spain for some amazing sport climbing over the holidays, and climbed the entire time— about 18 climbing days—at the gorges around the small town of Chulilla, roughly 40 minutes inland (west) from Valencia on Spain's Mediterranean coast. Single-pitch climbing doesn't get much more fun than in Chulilla—the area has a great lineup of classics.

Most of the really world-class climbing is in the 7c-8b range, basically mid 5.12 to hard 5.13. If you can climb .12, you'll have a good time, but there's not a lot of great or uncrowded climbing easier than that. I spent most of my time trying to onsight or flash routes. Mostly I failed at that, but did manage to do quite a few routes 2nd or 3rd go! Highlights were onsighting a 40+ meter 8a, even hanging the draws like a true tourist, and sending an 8a+ on my second day/3rd go.

Here is a list of 5-star classics that I'd suggest for anyone visiting the area. Each of these pitches is truly fantastic:

Conflicto Territorial - 7a+/.12a  Excellent technical stemming and pockets in a long warmup with a high crux.

Los Franceses - 7b+/.12   A double or triple-roofed corner with some crack climbing, leading up to 10 to 15 meters of overhanging tufa pinches and pockets.

Ramallar - 7c/.12+  A 40+ meter marathon! Amazing technical overhanging face climbing for 20 meters to a kneebar tufa, then 20 meters of tufas and pockets out a final bulge. A contrived direct finish variation is a bit harder. Skip the first few draws to make belaying easier.

Las Clochas de Targa - 8a+/5.13   Pumpy and sequential climbing for 25 meters—with a few rests—leads to an OK shakeout before suddenly confronting a relative slab crux, where barely-overhaning stone is dotted with too many tiny, upside-down holds. This is one is all about keeping it together as you probably wont be clipping the final bolt if you send via some tenuous trickery.

Entre Dos Caminos - 8a/5.13-  Stellar twin tufa climbing to a rest, to soe technical and blind cruxy climbing 10-20m up. The final half of this route is immaculate and just hard enough to keep your attention, as folks were blowing the redpoint on the final few moves. 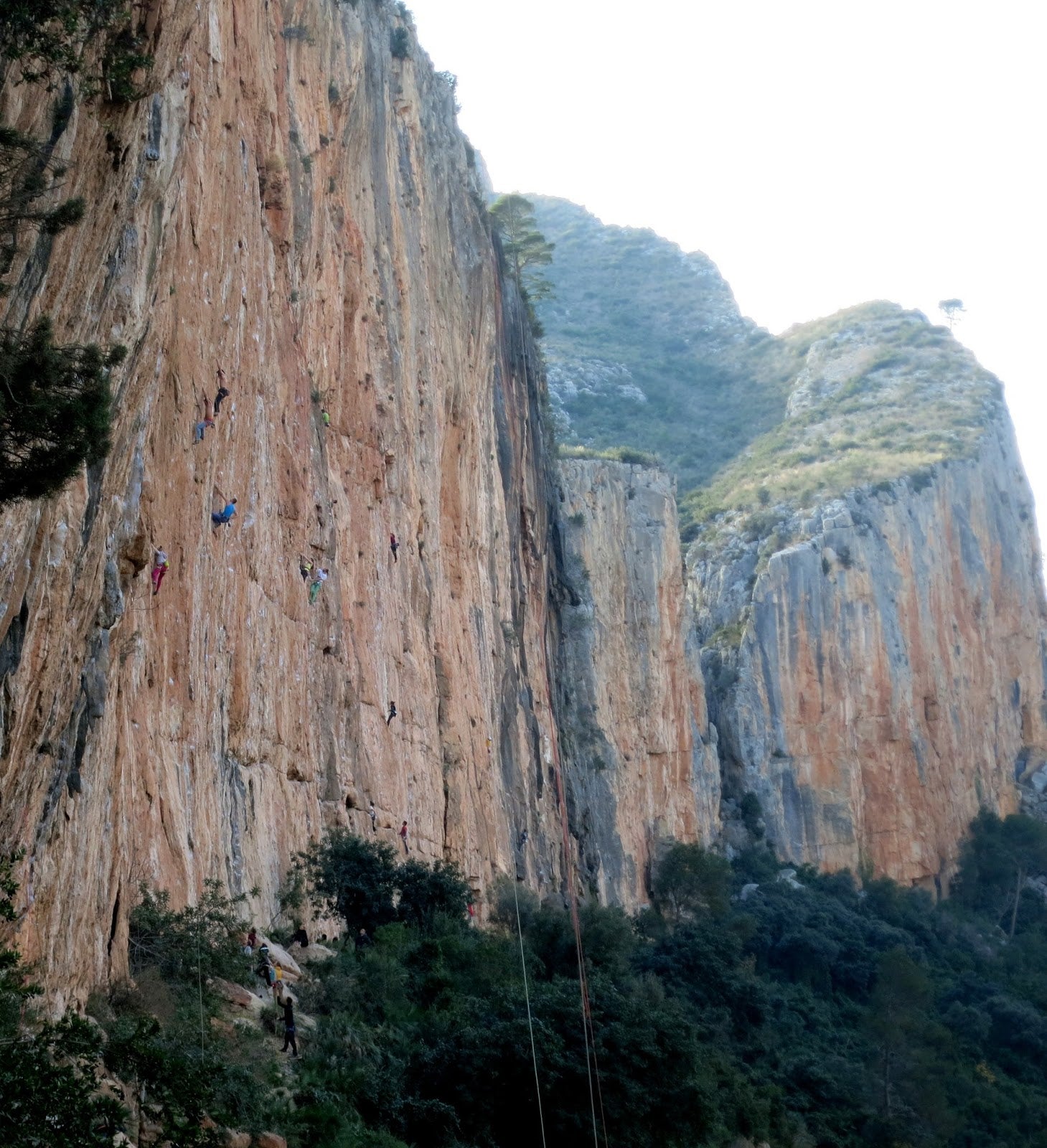 Danos Colaterales  - 7b+/.12  This one is 25' of thin, granite-ish techery, then an amazing long stretch of overhanging pockets and pinches, with a final crux gunning for the jug under the anchors as the holds get worse and worse.

Barrieros - 7c/.12+   The top route at the newly-developed Masters zone, on the far right (west) end of the gorge. This climb is world class, ascending dripping tufa flows past numerous roof and bulge features.

Nibelungalos - 7c/.12   Gently overhanging 30m of dripping pinches, pockets, small flakes, and some major committing movies with the chance for enormous airtime. Hardest moves are low down, but everyone was falling up high.

El Diablo Viste de Prana  - 7c+/.13-  Several cruxes include numerous places where you've got to fight or fly. There are some small/sharp pockets and a bit of real crimping on this one.

Planeta Namek  - 8a/.13a  This one is somewhat unusual for Chulilla in that it's got a definite stand-out crux down low (V5?). A couple of the higher moves were reminiscent of granite no-hands standups.

Tequila Sunrise  - 7c+/.13a   This is the easiest line (but an amazing one) on the overhanging Balconcito Wall. Crux climbing is down low, and learning the left-knee kneebar is crucial. Really fun single steep tufa to begin. Tie knots in the ends (or have the belayer tie in) even with an 80m.You've got to have a second rope handy to throw out to the lowering-off climber so you can reel them back in to the belay ledge.

El Bufa  - 8a/.13b   A powerful boulder problem off the get-go leads to a nice tufa-chair rest. The upper 35 meters is a marathon of minor cruxes, culminating in a committing boulder problem above the last bolt. Tie knots in the ends (or have the belayer tie in) even with an 80-meter, you've got to have a second rope handy to throw out to the lowering-off climber so you can reel them back in to the belay ledge.

Montana Magica  - 8b/.13+   Basically a parallel and harder version of El Bufa, with sustained long reaches on crimpy .12/12+ headwall climbing up high. Tie knots in the ends (or have the belayer tie in) even with an 80-meter. You've got to have a second rope handy to throw out to the lowering-off climber so you can reel them back in to the belay ledge. 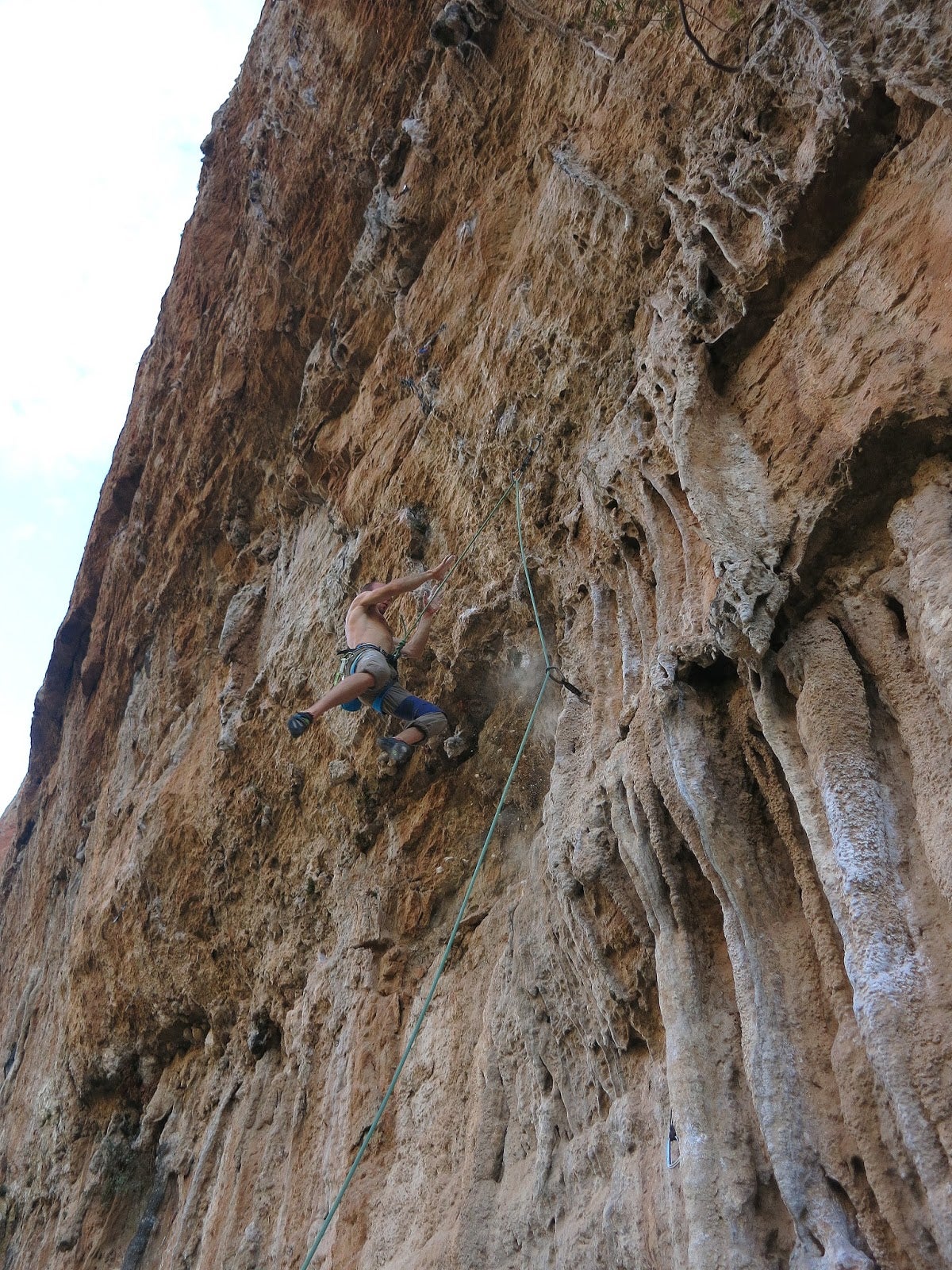 Los Veteranos - 8a/.13b    This is a steep route by Chulilla standards, tackling a series of powerful roofs and bulges. Really gymnastic and powerful climbing! If using the tree just before the anchor isn't allowed, I guess I'm a Washington climber and couldn't help myself.

Agente Naranja - 8a/.13b   One of the proudest and most varied lines in Chulilla. Forty meters of everything, including a steep boulder start, techy face moves, stemming, and a wild arete up high. The final bolt is REALLY hard to clip without a long draw.

Super Zeb - 7c/.11+   This route is an excellent stemming and face climbing pitch right above the trail. And although it's 40 meters and never truly easy, I think it demonstrates the differences in style/familiarity for different climbers. It's a stemming feature and I swear it'd be .11+ at Index or Trout Creek (it gets .12+ in local grades). There aren't always handholds.

Altos, Guapos, y Fuertes - 8a/.13-   This thing is powerful and bouldery down low, but doesn't much relent. You'll have to fight for any rests and keep it together on all 40 meters. One of the best in Chulilla.

Siempre Se Puede Hacer Menos - 8a/.13-   I only climbed to anchor #1, there is an anchor #2 and a anchor #3. The whole thing is 64m and 5.14c. I was worked after managing the numerous cruxes and style switches on the 40m first pitch. Excellent, varnished stone and cartoonish tufa daggers.