A Tale Of Two Bivies 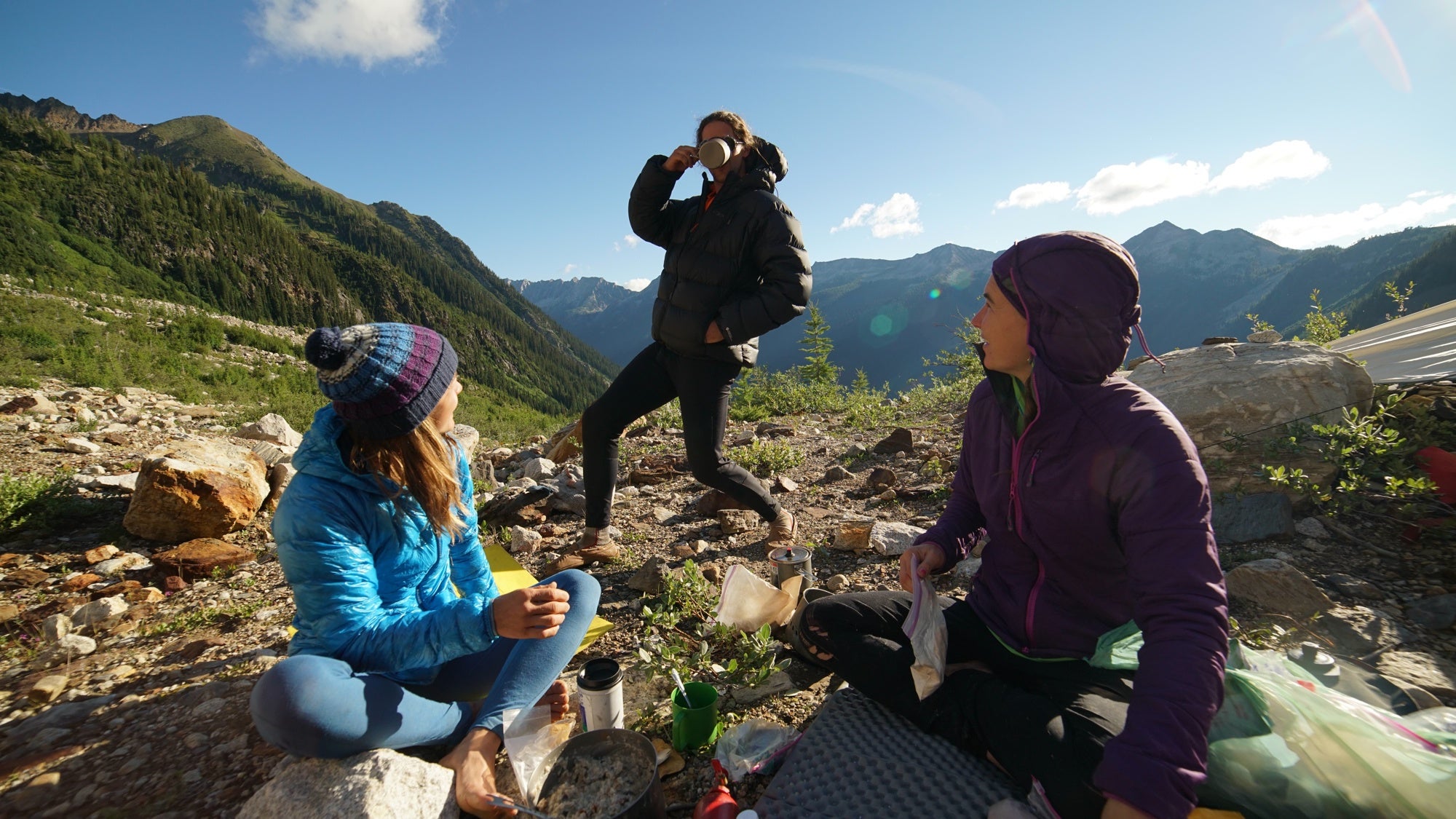 Editor's note: Spending an unexpected night on a mountain brings out the true character of climbing partnerships. Here's the tale of one night out—way out, in the Leaning Towers area of B.C.'s Purcell Wilderness—as told by two climbers, Jenny Abegg, and Graham Zimmerman.

JENNY: I let out a long exhale as the twin lines go slack between my hands, releasing their own tension. Hearing a clear “off rappel!” from below, I thread the ropes through my belay device, remove a backup cam and weight our five-nut anchor. At least one of these should hold, I assure myself, exhaling once again.

A cautious rappel brings me back to my partner Alix’s side, nestled in a tight north-facing flare. Alix has unzipped her jacket, as well as the jacket underneath; as I gaze at our attempted variation up the steep face of Wall Peak, she busies herself in brushing a garden’s worth of dirt from her clothing. “A splitter hand crack, but it just kept getting wider. A 5-inch crack for as long as I could see - there’s no way I should have run that out, right?"

“No way,” I assure Alix. “I wouldn’t have. But hey, at least we tried.” The horizon behind us is beginning to develop an orangish hue; perched just a little over halfway up the wall, we make a wordless decision to let go of our attempted new route and climb the established line to the summit. 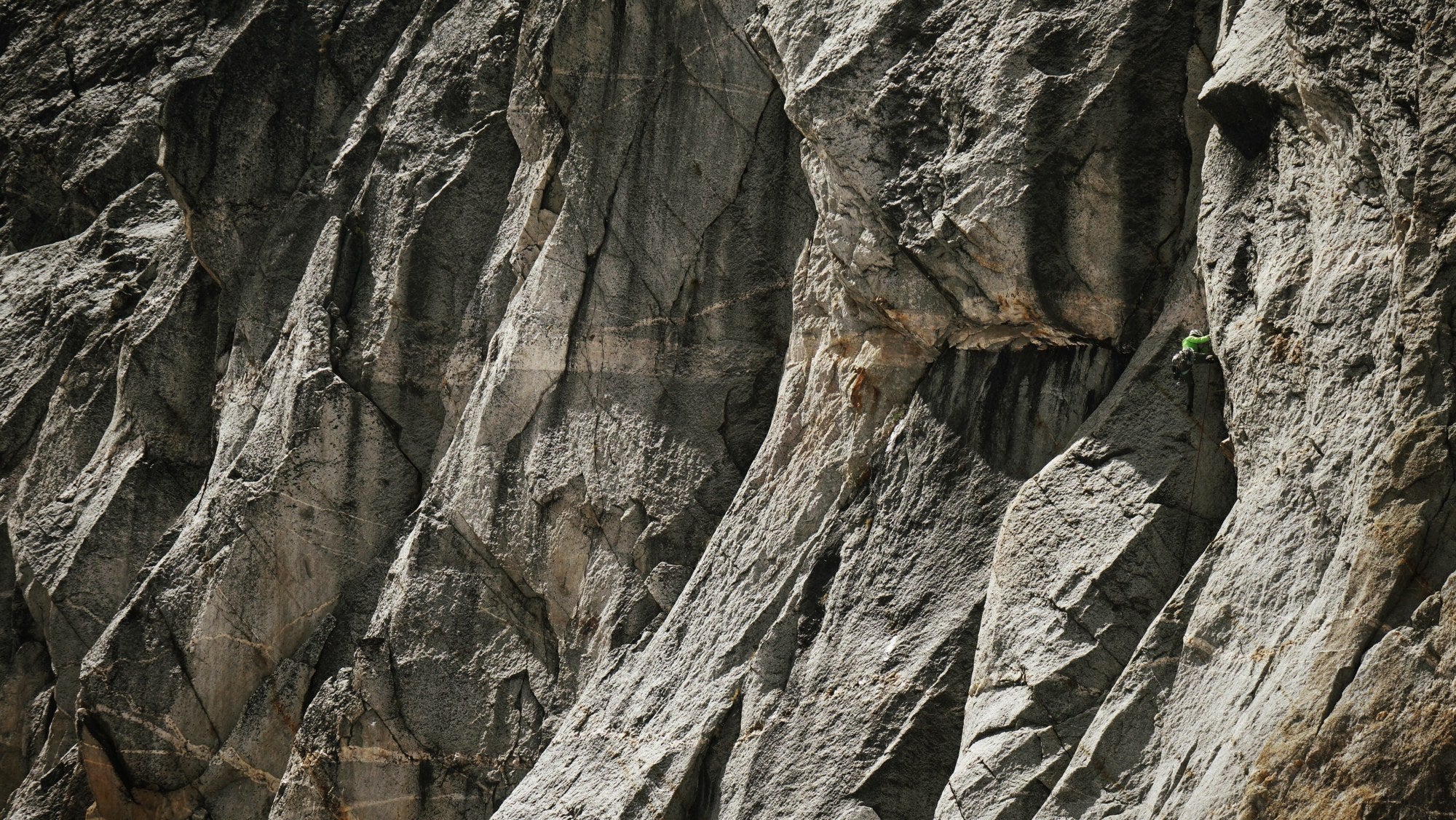 Gazing beyond the glacier guarding the approach to Wall Tower, I see our bivy from the previous night, perched on the flanks of Hall Peak. If I could see over those slabs onto Hall’s east side, I would trace our footprints across a large snowfield, down slopes of talus and metamorphosed rock, and through a steep wildflower-laden meadow to our basecamp in the hanging valley below. Our tracks would be untouched and the landscape empty of movement—for ten days now we’ve been alone in the remote Leaning Towers of the Purcell Wilderness Conservancy.

But a voice pierces the air, sounding far off but clear. “Yeaaaaaaaa Alix and Jenny!” it yells. “Keep crushing!"

Wait, did I mention? There are four of us.

Looking across the face of Wall, we spot a small duo of green and red questing up the skyline of the neighboring Block Tower. Our friends Forest and Graham have provided a constant source of entertainment throughout our day, from their leisurely start up the unclimbed east buttress to their continued slow progress, to the occasional snippet of enthusiastic conversation we catch. We reply in a chorus of monkey calls, a wordless vocabulary of camaraderie and safety, a gift of comfort as we all venture into the unknown.

GRAHAM: Last year, in New Zealand, I spent a night spooning Forest so hard that my hips cramped while we waited for a storm to clear and the light of the morning to allow us to navigate our way out of the Darrens mountains. Nearby our friends Kyle and Jewell were huddled under an emergency blanket—and while they may not have actually been comfortable, we still looked on their bit of shelter with envy and vowed to always bring one along on future missions.

Now here we are again—but this time in British Columbia. It’s 1 a.m., and I am standing in aiders, banging on beaks trying to create an escape from a blank headwall 1,000 feet up a new route in the Leaning Towers. Out to my left I can see a small ledge and it comes as a huge relief when I tension to it and build an anchor. Above, mossy cracks spindle up into the night as Forest and I quickly make the decision to sleep out the dark hours on the park bench-sized ledge.

JENNY: I lead up and left to gain a deep chimney that will bring us to the summit. In the shadows of the chimney, darkness arrives quickly, as if a great hand reached out to the sun’s orb and snuffed it out at once. Our swapped yells of encouragement increase; the four of us are compatriots in the battle, continuing onward against the enemy of night.

Alix and I emerge from the chimney and onto the summit just as dusk ushers the rest of the mountain into shadows. Now, like birds, we build nests on the summit’s talus, weaving together packs and ropes as insulation against the ground’s cool grasp. Switching off our headlamps, we gaze toward Block Tower, finding two small points of light hundreds of feet below us, the higher moving slowly upward. “Goodnight!” we yell, wondering when their night will begin, or if they will continue their climb throughout the dark hours.

My body trembles inside layers of down and wool; I count off 20 sit-ups, not for the first time tonight. I dare to open my eyes, fearing the blackness of the starry night or perhaps the remaining colors of sunset still in the sky. Yet a stiff breeze filters through the air, and when I look east, I see that a line of hope has appeared on the horizon.

A glimpse over to Block Tower reveals no sign of headlamps; I wonder if they're still shining somewhere, leading their bearers higher, or maybe down and back to our advanced bivy. I wonder if they’re turned off, strapped to helmets around tired heads with closed eyes. Wherever they are, I wonder if Forest and Graham are warm, if they have enough food and water, if their psyche is still as high as the day before. 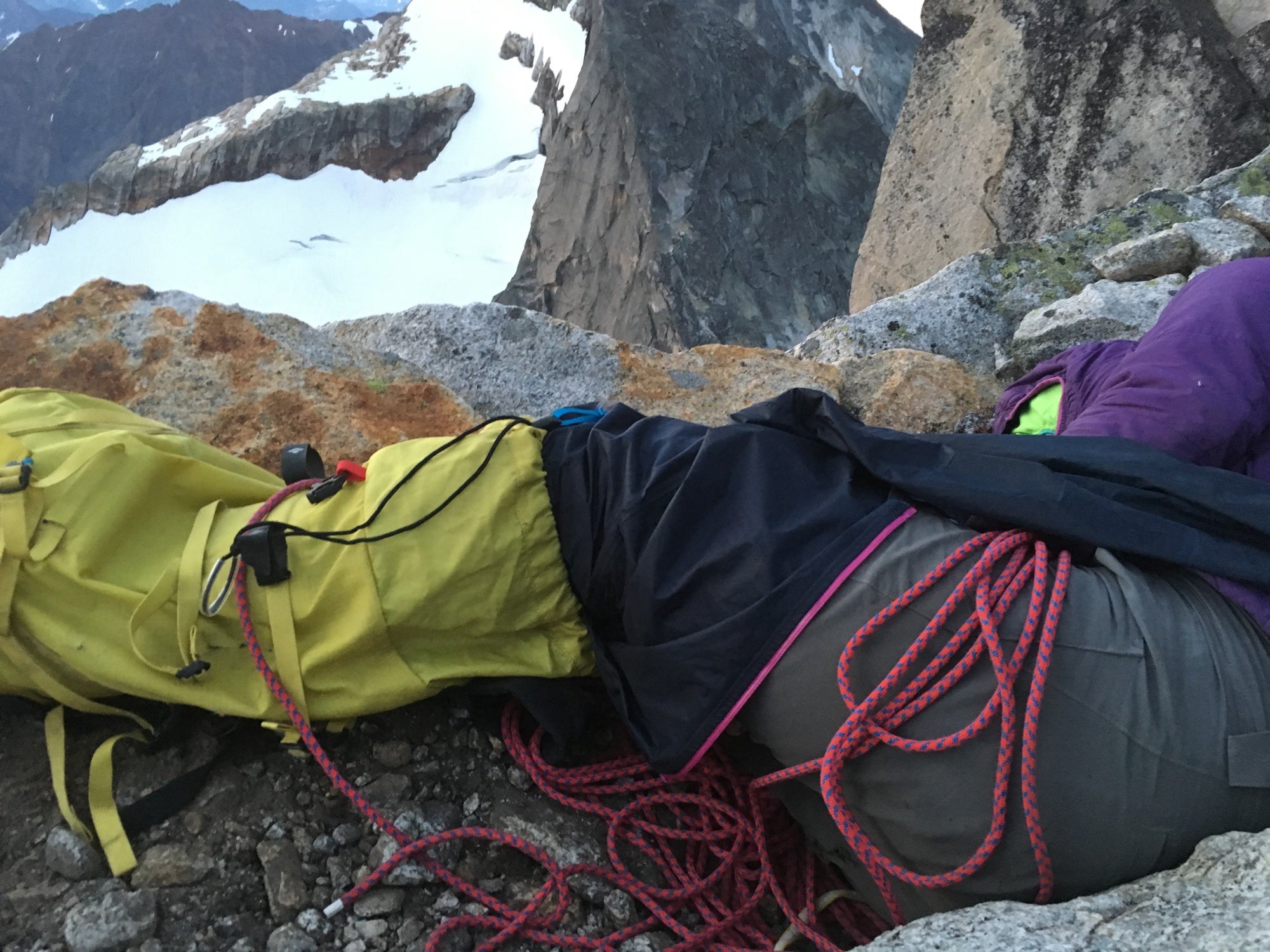 GRAHAM: Looking down at the base of the wall and out towards base camp we laugh about the fact that this might have been avoidable if we'd not gotten psyched on opening another route the afternoon before—or listening to an album by one of our favorite groups, The National, before departing that morning.

The route's obvious splitters down low had led us to believe we could climb the route quickly, but challenging route finding and grassy cracks had slowed us higher on the route. We giggled at our situation and the fact that we could see our friends Jenny and Alix setting up to bivy on the tower next door (also unexpected). This time, though, we did have an emergency blanket.”

JENNY: With the sun’s eventual warmth, Alix and I pack up, counting remaining teaspoons of water and bites of energy bars. About to descend, Alix notices movement on Block’s steep buttress, and shrieks, “It’s them!” We peer over the summit edge, spotting the pair not much higher than their previous night’s headlamps, preparing to start up another pitch. 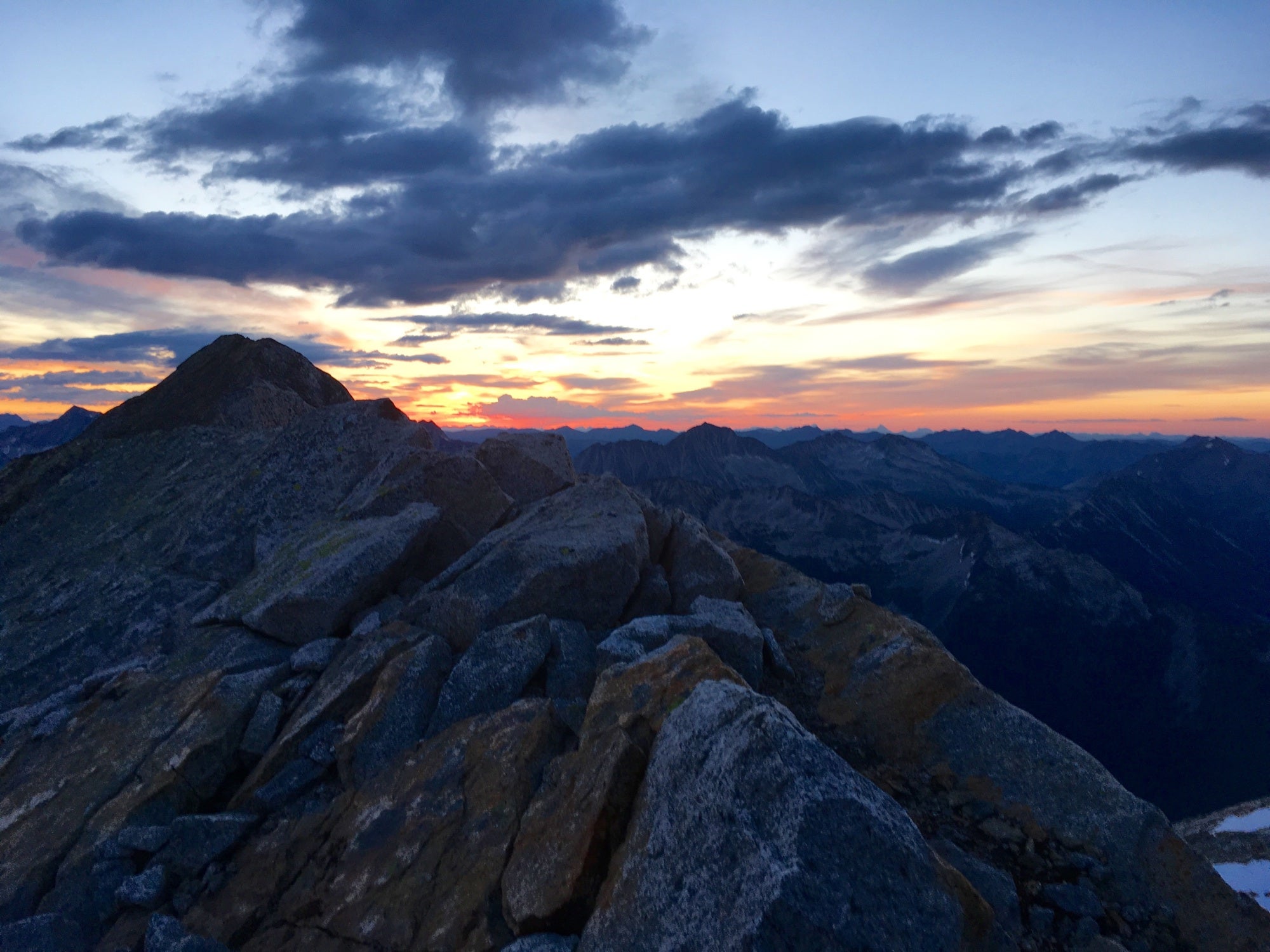 GRAHAM: The night passed expediently and when we “awoke” to the sun creeping over the horizon I was not spooning Forest but rather sleeping in his lap as we both tried to huddle under our thin metallic blanket.
We stretched in the growing light and Forest brought the motivation to get involved with the pitch above. We whooped at the gals and set off to the summit in the beautiful morning glow thankful for good weather beautiful mountains and fantastic music.

JENNY: We exchange hoots and hollers, wishing for the power to yell paragraphs across the mountains, to send stories of glory pitches, of attempts and failures, reports of cool nights and warm hearts attached by cordelette to the morning air streams. For now, though, across cold stone faces and over crevassed glaciers, feeling the other team’s presence is enough.

And so we descend, brimming with excitement and curiosity, eager to reconnect. As for the others, well, looks like they still have some climbing to do.