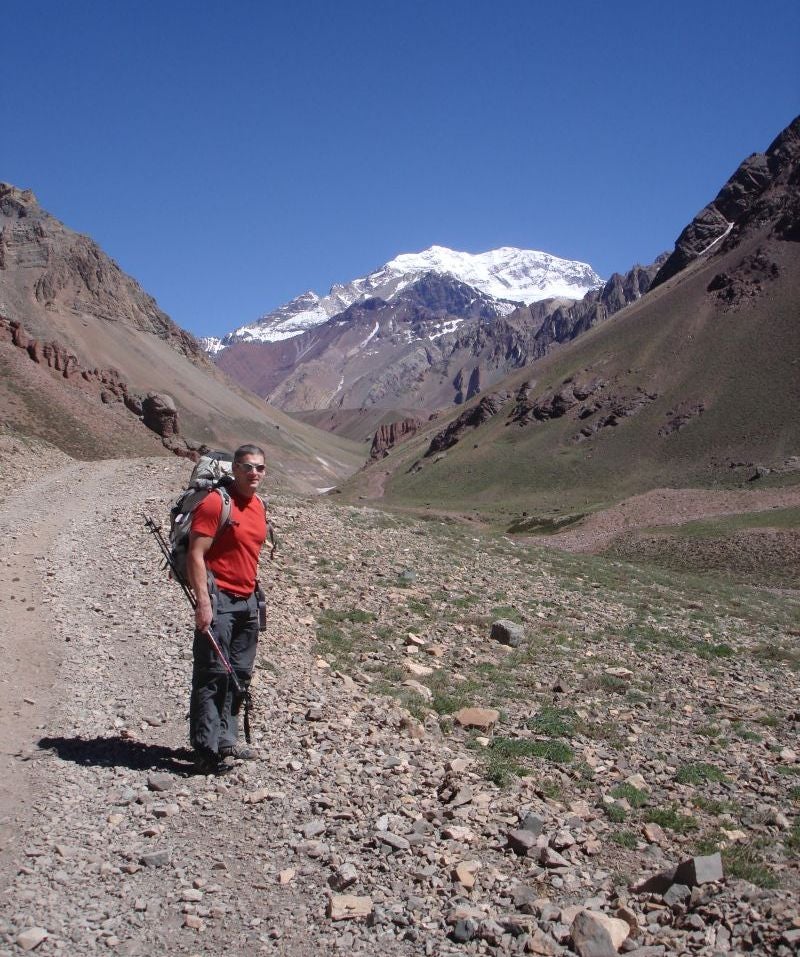 In early December, Rory Stark and I flew to Argentina for a late spring climb of Aconcagua (22,829 ft.). Our agenda: acclimate via the regular NW Route, climb an existing route or a new line on the South Face, and I wanted to try a one day ascent of the Regular route from the road and back.

The first two days in Mendoza and Penitentes were used to make last supply purchases for 18 days on the mountain and arrangements for mules to carry our gear. The weather had been unseasonably poor and to my knowledge, not one party had been able to summit.

The day we drove up to the park entrance at Horcones (9,600 ft.) was warm and sunny. At the Guarda Parque headquarters, we registered for the South Face which requires radio contact and an equipment check. Then, it was upward onto the dusty trails.

We quickly set up camp at Confluencia and decided to carry light packs six more miles up the Lesser Horcones Valley to the base of the South Face. By late afternoon we were at 14,000 ft, staring at the enormous wall that swept up 9,000 ft. Poor weather had preserved the ice conditions but we knew that it would only last a week at most in the intensity of the sun and we would have to summit via the normal route rapidly.

Early the next morning we broke camp, shouldered our packs, and crossed the river below Confluencia beginning the grind up the Horcones Valley into the persistent headwind. Five hours later at the Guarda Parque checkpoint, we signed in and set up our main base camp. Rory had a slight cough but we both felt good and made a carry 2,000 ft. higher to Camp Canada the following day.

At Canada, 16,200 ft, in less than two hours, we made a cache in the rocks. As the season was early there were only a handful of tents set up. I remembered spending Christmas with Lara at Camp Canada ten years earlier. We descended back to base camp and as required, went to the medical tent to have our oxygen saturation levels checked; both satisfactory for two unacclimated folks.

Since we were leaving our tent unattended for the next few days we anchored it against the winds that blast the mountain with several hundred pounds of rocks and headed off after lunch at a slow but steady pace. Two and a half hours later we set up camp and decided to move to Camp Nido at 17,800 ft in a single carry the following day.

We awoke to yet another sunny day! It is a long, slow grind up to Camp Nido de Condores from Canada, but by early afternoon we had arrived. Feeling restless, I made an additional carry up to Berlin that afternoon to lighten our loads the next day.

At Berlin (19,200 ft.) I was disgusted to discover a huge amount of trash from previous climbers. I estimated the approx. 900 lbs of trash could be removed in one day by twenty people carrying 50 lb. loads. Note to self for the future….

When we move to the Berlin high camp, Rory was beginning to cough quite a bit and stoped a few times on the way up. We talked with two other American climbers, Andy and Dave, who were also going for the summit the next morning. They were leaving at 5 am, expecting to summit by 1 pm and Rory decided to travel with them. I had lightweight boots for a speed ascent and wanted to wait until the sun came up before heading out so as not to freeze my feet.

I left Berlin Camp at 9 am, moving rapidly to catch the others before the summit. Passing numerous groups, I met up with Rory in the Canaleta. I arrived on the summit at noon and took a survey of the South Face route. The crevasse danger looked low as the high snowfall from the previous winter had sealed up most of the dangerous cracks. I passed the body of the climber that had died on a solo attempt a week previous and mindfully made my way back down the Canaleta. Rory looked a bit haggard but was only a few hundred feet from the summit so I did not expect him to be far behind.

Back at Berlin Camp, I began to melt water for Dave, Andy and Rory and packed to descend to base camp. Suddenly, Dave ran into camp telling me Rory was at the bottom of the Canaleta showing signs of high altitude pulmonary edema (HAPE). I rapidly headed up with the essentials. Fortunately, Andy had been able to help Rory descend under his own power with minimal assistance. I helped administer Niphedepine to alleviate the symptoms and almost immediately he began to cough up bloody phlegm. The rule of thumb with high altitude related illness is to descend at least 3300 ft and symptoms should start to improve. We decided to continue moving to base camp before the medicine could diminish its effects.

It was nearly dark when we arrived. Rory and I rested inside the tent following our 9,000 ft descent until suddenly he sat upright and gestured that he could not get a breath. Getting him to the Medical tent, the diagnosis was that he had pneumonia. Doctors watched Rory overnight until he could be flown out the following day. The following morning I checked on my friend and packed his belongings at Plaza de Mules to send them down to Penitentes. With intent to continue on, the next day I packed the second set of our gear for delivery to Mendoza where Rory was recovering and also packed technical gear for the South Face, arranging for a mule transport to Plaza Francia the following day.