An Ode To Bad-Weather Tourism

“Who comes to North Wales in November anyway?” Dan asks.

He’s part way up a route at the slate rock quarry of Llanberis—the central town that climbers live in here and where Dan, my “host” friend, has brought me to climb on the third day of my chilly tour of the area. The rock is obviously cold and reminiscent of a chalkboard, remarkably smooth with the occasional edge to try to make the most of, and yes, cold. We are squeezing a worthy morning pitch in before steady rain is forecast to fall.

The primary reason for my trip over the pond was to visit my grandma in London. My mum’s family is from here, and when I come for a visit my traveling behavior is predictable for an obsessed rock climber: Aim to squeeze it in whenever and wherever possible. My family no longer asks me, “How long are you staying?” but rather, “Where are you headed?”

My grandma lives in the same flat my mum grew up in, and the furniture in the exact same place as when I was little, and the familiar smell, gives the flat an air of timeless for me. But this is of course an illusion. So I record a 90-minute conversation with my grandma this visit—her short-term memory has faded significantly over the past year, but her long-term memory is still impressively sharp and I want to hear her talk about World War II again. Now 91, she worked and drove up until this year. At 19, she joined the British army against her mother’s wishes and became a driver in the war. Her decision to join the army was born out of anger over the deaths of her first love and other friends in the war. Like horseback riding, driving was another way she gained her freedom, and after five years of service, she returned home a very changed woman.  She is still fiercely independent and her recent decline and dependency is not a graceful transition.

Before I take off for North Wales, I tell her again where I’m headed, as she doesn’t remember. We look at a map and she shows me where she grew up—a town just a little further north than where I’m headed. As I head out the door she says, “Don’t do anything I wouldn’t do.” I always see a sparkle in her eye when she says this. I hear: “Please do everything I can’t do.”

My girlfriend and I take a three-hour train from London to Bangor with hopes to get lucky with a bit of weather and local climbers willing to show us around. 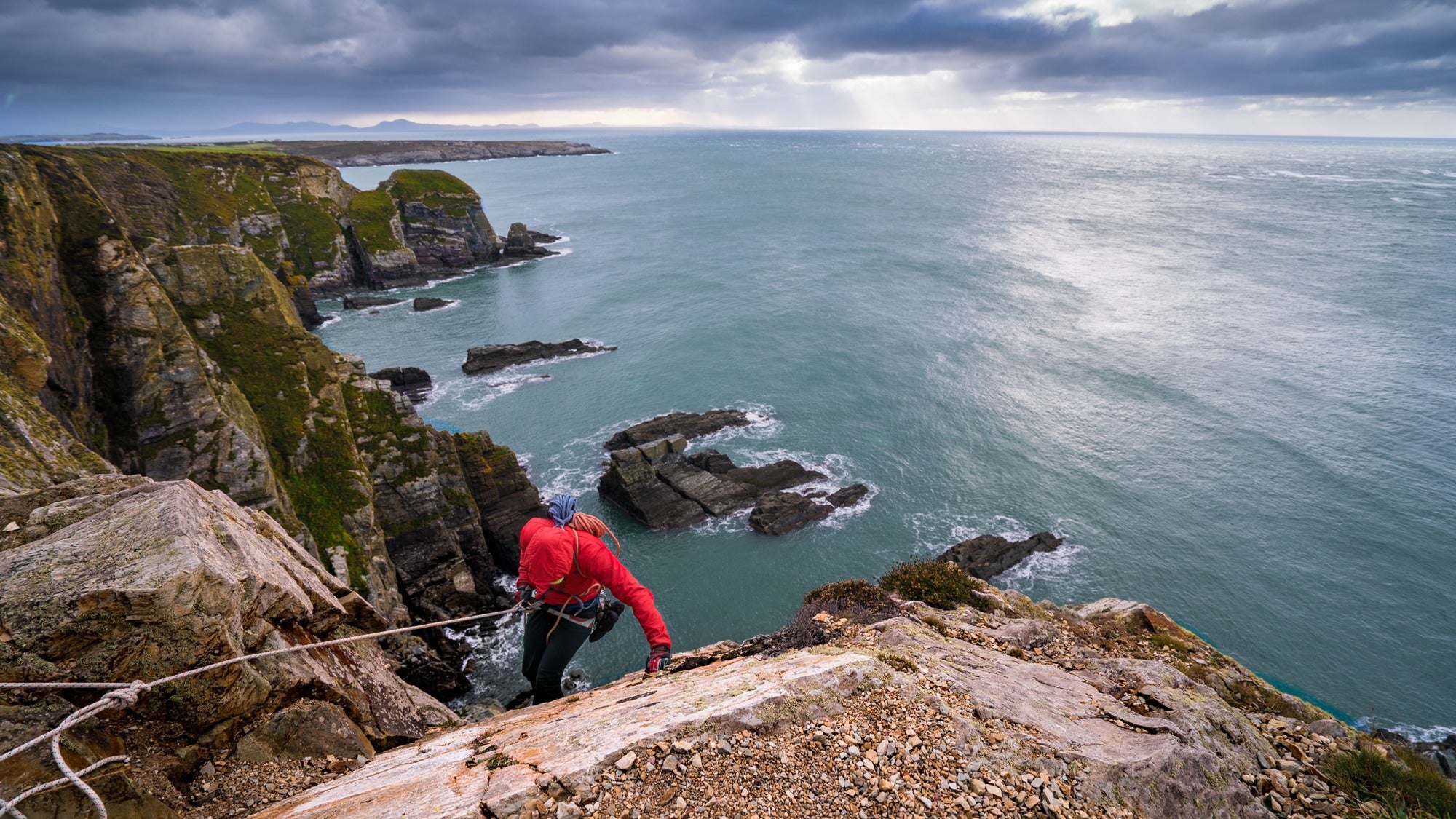 My friend Dan McManus meets us at the station. Notably, the first and only time Dan and I hung out before was an epic day of climbing in Yosemite on El Capitan. Introduced through friends, we decided that our blind date route together would be a free attempt of Freerider in a day.  Close to 20 hours after we began, we topped out one of the more memorable days of each of our climbing careers. A fondness for the memory continues to our reunion and Dan and I scheme about how we will possibly follow up that epic day with our second day climbing together.

We eat curry with Dan’s mates at an Indian restaurant—the real national food of England at this point! With warm bellies, Dan takes us to an empty flat that his friends are trying to sell and generously let us stay in. We set up a bed of bouldering pads and nestle in feeling grateful.

As ever, the community forged by climbing and the kindness of virtual strangers humbles me when I travel to new places.

Day 1: Gogarth
We wake and walk down to the main cafe for coffee and a fry up. Welsh is the first language in Wales, and the double ‘L’ of Llanberis is pronounced more like an ’S.’ I flounder and seem to mishear to every Welsh name I encounter. The town is quiet and moves slowly. A lake and a slate quarry form a boundary along one side and hills surround us. The land looks complex, sharp with greens and browns. It smells musky, of course wet.

Dan picks us up and we travel about an hour south to Gogarth. A better-known adventurous seaside climbing area, this is the place I’ve been looking forward to most. Rain is forecast all day in Llanberis but Dan explains that the weather is so localized here that it could be dry by the sea. A steady winds chills us once out of car and we scuttle to the cliff’s edge in hopes that the Yellow Wall of Gogarth will be sheltered. Dan anchors his static line to boulder and we rap—ahem, abseil—down a couple hundred feet to a grassy ledge above the tide and noisy, expansive sea. The wall overhangs in complex roof systems and right-angling horizontal layers to the top. The routes are all traditional without any fixed gear, and the limestone appears a bit loose in parts. Dan and I start with an ultra-classic E3, The Moon. While only 70 meters long, the route is typically done in three pitches. Dan gives me the main pitch to lead—a wild traverse, around and over corners and overlaps. The omnipresent, noisy sea laps below and I feel nervous in this foreign land. I navigate slowly around the corners and overlaps, trying to stay on route and not to fumble the double-rope situation. I warm up to the climbing and lead the Cow E5 next, but I decide this is about the difficulty that will keep me intact and without an epic. We call it a day and head over to Dan’s friends place for a delicious, and supposedly very Welsh stew of lamb and anchovy and vegetables.


DAY 2: Nescliff
The next day Dan has to work, but climbers are getting out and Dan sets us up with a ride. We drive inland to a small sandstone area called Nescliff where a short 40-foot cliff band reveals surprisingly aesthetic lines, again with traditional gear. I watch the locals fiddle in small, questionable gear on remarkably soft and sandy rock and decide it’s a great day to top rope. The chill of the day eventually zaps my motivation to climb and I explore the cliff line where there is an old cave that was inhabited by people for hundreds of years until relatively recently. On the drive back, we talk about other climbing areas. The locals travel to a number of world-class climbing areas and yet they obviously value their local grounds and the unique challenges that even a sandy headpointing crag offers. For as small an island as England is, the guidebooks are extensive and exhaustive, and Dan assures me that they take great pride in them.

Impending and certain wetness dashes our hopes to boulder by the sea. So here we are at the Slate Quarry, Dan trying to entertain the American who chooses to visit in November.  I’m thankful that the chalkboard rock is bolted and I’m able to give a solid effort up a Houdini-style chimney to an overlap. I get my upper body over the overlap. The rain is starting and the essential shallow fingerlock is wet. I try to make it work but I slip and fall. I graze the edge of chimney and promptly cut my leg down to white fat. It’s an inconsequential injury but will likely scar. And really, something about this place leaving its mark on me pleases me.

My gear picks for rock climbing in North Wales: