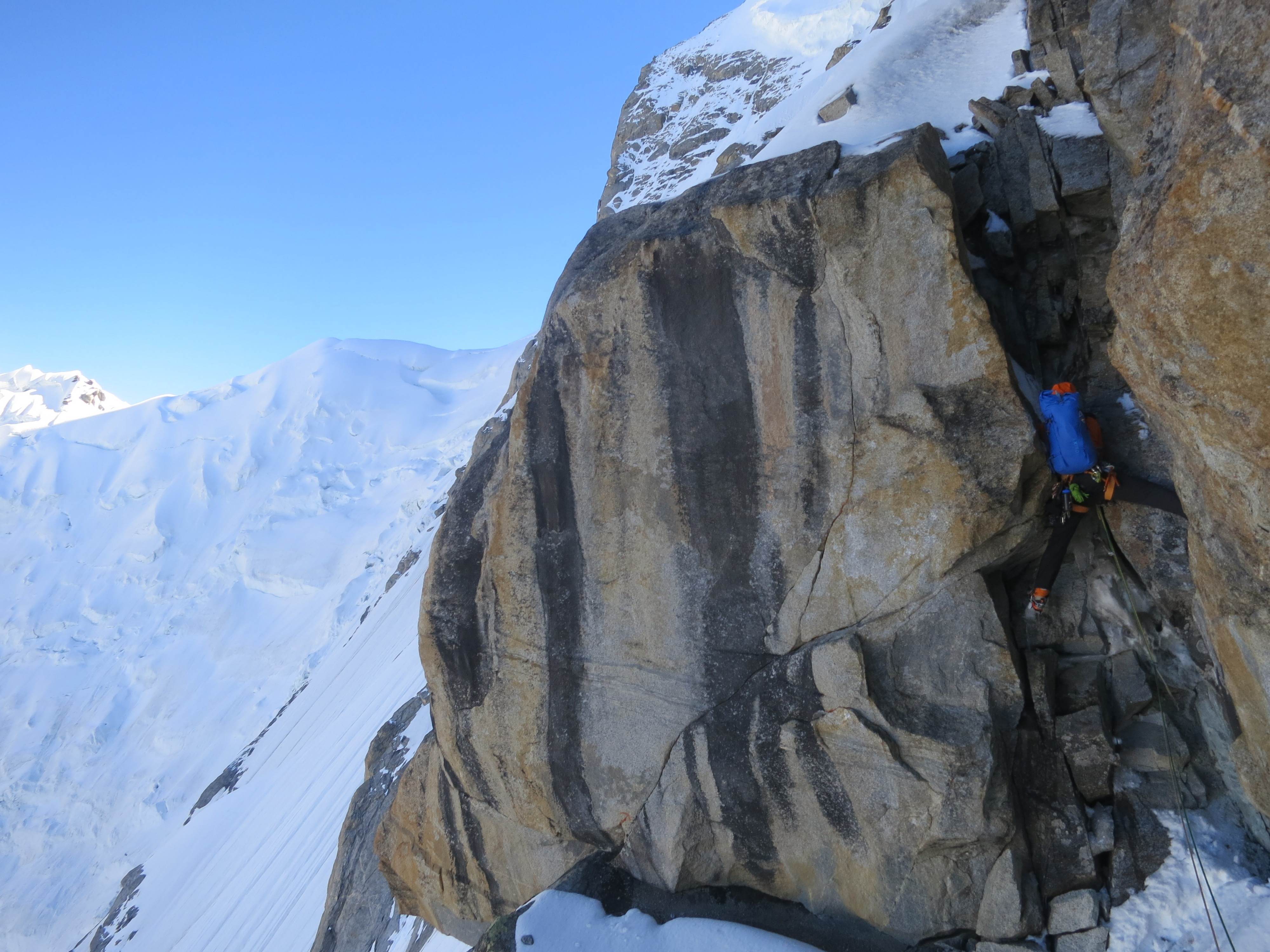 Scott Bennett, Steve Swenson and Graham Zimmerman have just returned from a fruitful and very enjoyable expedition to the Pakistan Karakoram. They spent the months of July and August in the Nangmah Valley and, during a season marked by poor conditions and bad weather in much of the range, were fortunate to open two beautiful technical routes.

They arrived in basecamp on the 10th of July and began using small bouts of clear weather to acclimatize. The month of July was defined by bad weather, but the team was still able to use the time to establish an Advanced Basecamp on the far side of the 'Hidden Col' (5,400 meters), a day's walk from basecamp. Beyond this, they were able to establish a route to the cirque below the stunning and unclimbed Changi Tower (6,500 meters). The approach to Changi involved a very complex icefall that on the first attempt required two days to navigate and a 300-meter ice face to reach what was established in 2010 as the 'Polish Col' (5,900 meters).

They made the first ascent of Changi via its North Ridge (M6, 5.10, A2, 600m) from August 8th to 10th in a marginal weather window. The climbing was beautiful and sustained on high-quality granite. Bennett had an excellent showing high on this route leading the upper cruxes quickly and allowing the team to summit just before dark on the 9th. The descent required 18 rappels to reach the glacier. (The route began at the 'Polish Col' but additional rappels were required for the snow and ice slope below). 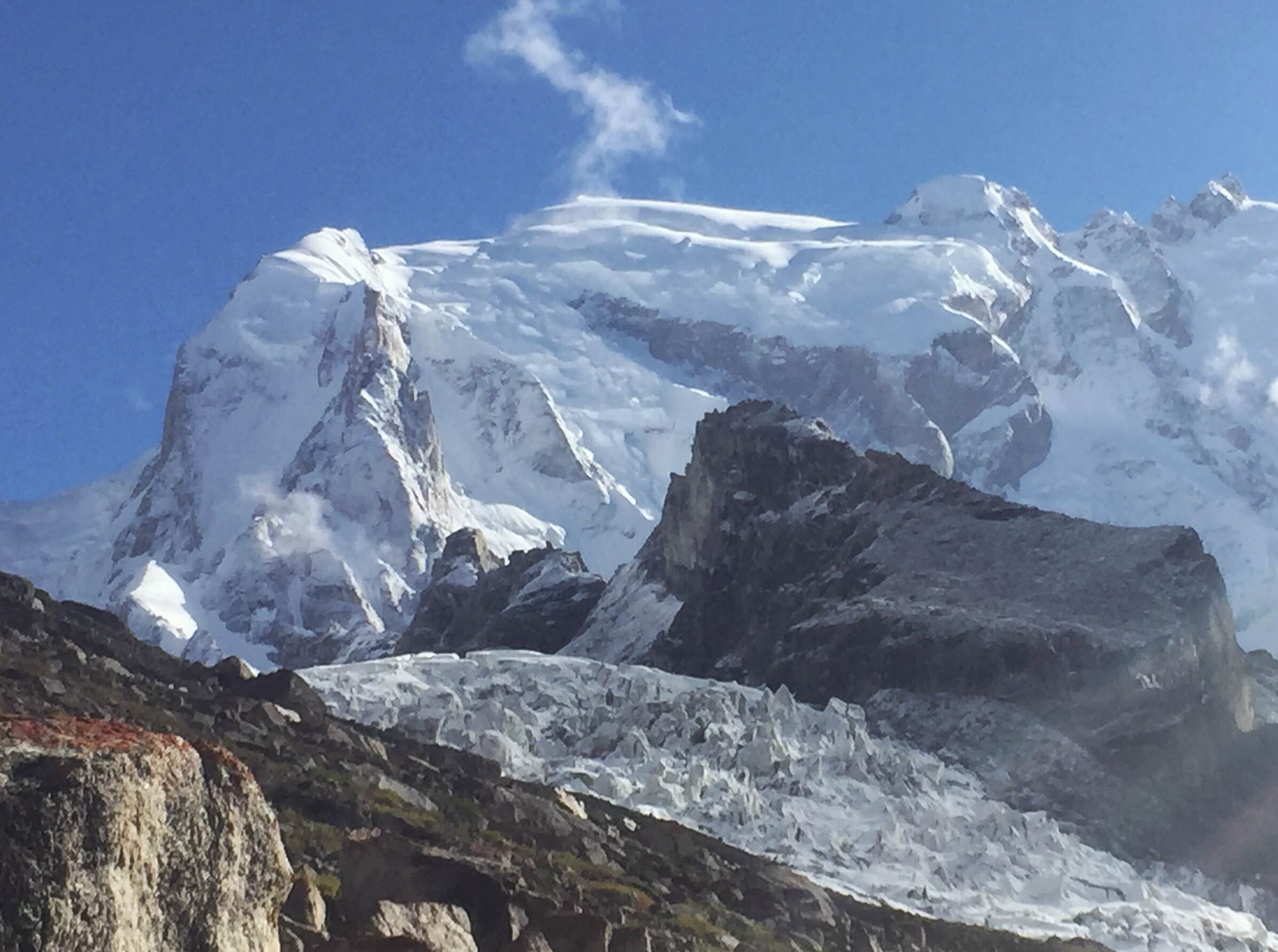 It needs to be noted that there has been some confusion about the name Changi as a peak in the Amin Brakk group named Changui Tower (5,700 meters) has in the past been misreported as Changi Tower. This mistake was found by a Polish team who attempted Changi Tower (6,500 meters) in 2010 and has been confirmed by research completed by this 2015 team.

After utilizing the ascent of Changi to acclimatize, the team had intended to attempt the central pillar on the South Face of K6 Central (7,100 meters). They were very disappointed to find that the lower 700 meters of the route were badly threatened by multiple huge seracs. Due to this, they removed their Advanced Basecamp—which was set up below the pillar—and began glassing the mountain for other potential routes. 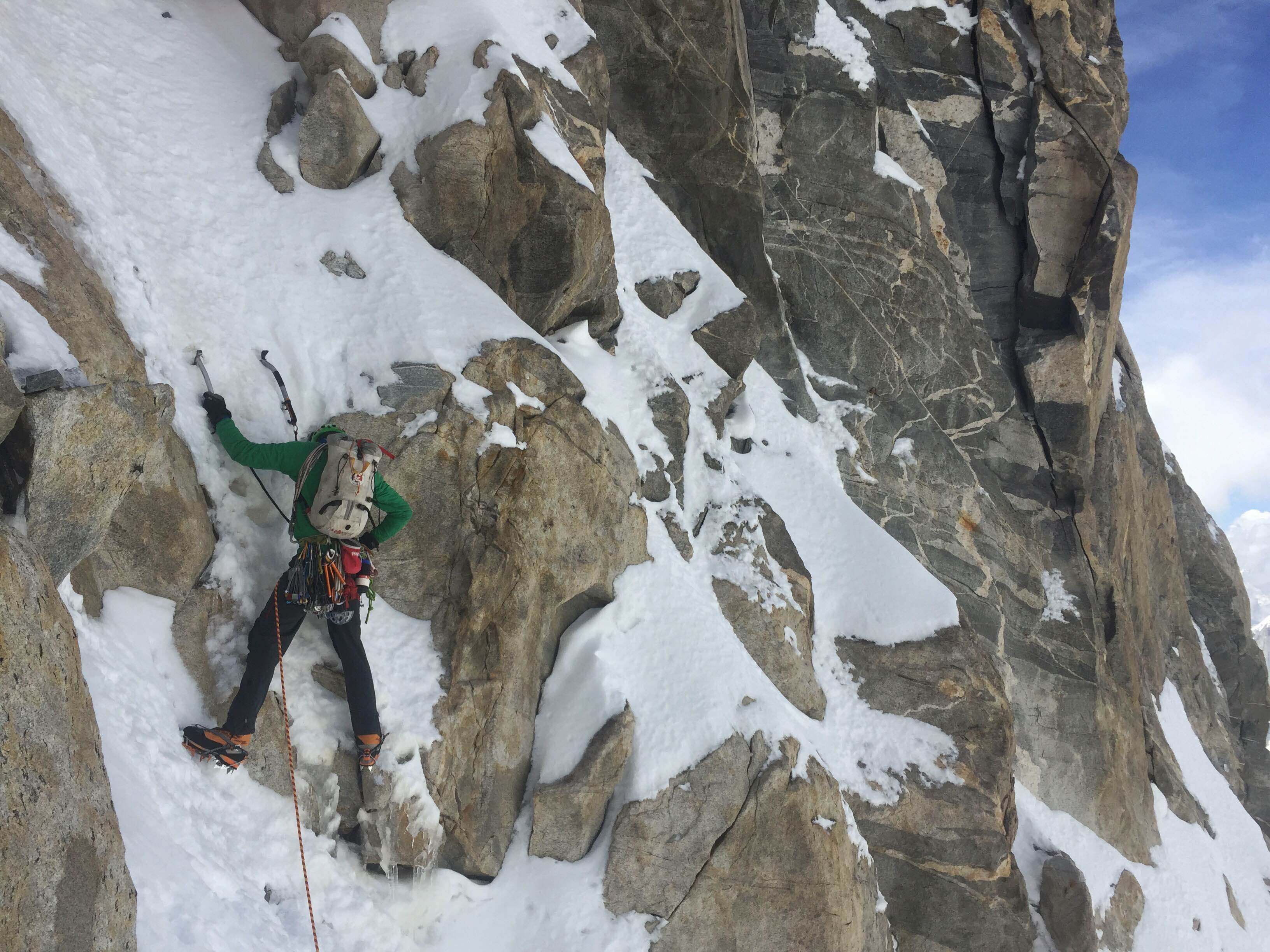 They soon found what they were looking for on the western end of the K6 massif: The striking SW ridge of K6 West (7,040 meters) offered huge relief, steep mixed ground and a line free of objective hazard.

Zimmerman and Bennett put themselves in a position to attempt the route with a cache at its base (Swenson, having determined that he was not yet recovered enough from the earlier effort on Changi to attempt such a route bowed out from the attempt). On the 18th of August, a weather window opened and the two younger climbers set off on the route with light packs and a minimum of equipment so that they might move fast enough to avoid an incoming storm. 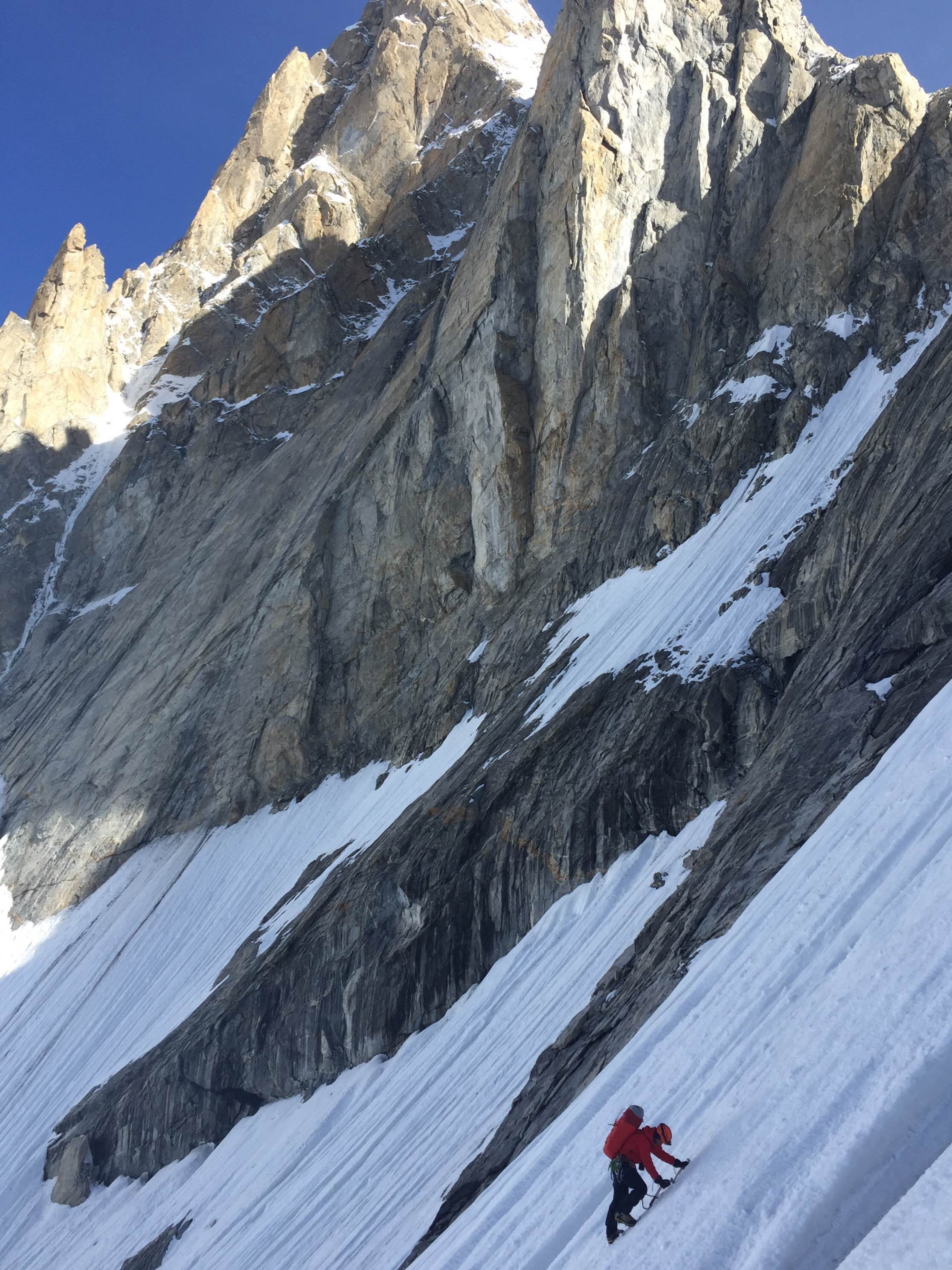 The route started with a steep snow slope that led to the ridge crest, on which they stopped to bivy early on the 18th due to excessive heat (at 5,800 meters). They started climbing again at 2 a.m. on the 19th. The ridge offered fantastic and challenging climbing both on the crest and on its sides, when the crest became too corniced. The route then ran into the first of two buttresses which were turned to their west side via a series of ledges. The technical cruxes of the route were found in the mixed sections between these ledges, which offered very enjoyable and aesthetic climbing. Eventually the team reached a large, steep ice sheet that led to the top of the second buttress. They reached an excellent bivy at the top of the second buttress (6,600 meters) at 7:30 p.m. and were treated to a beautiful sunset over the Karakoram.

Departing at sunrise on the 20th, they left their tent in place and fought through exhausting deep snow up the final 400 meters to the summit. From the summit, the views of the Pakistani and Indian Karakoram were spectacular.

They descended to their tent, reaching it at 4 p.m., and rested till dark when they began descending the West face. They made 19 rappels down the face, working hard to stay out from under the serac that defined the left-hand side of the wall. A long traverse, a pitch of ice, and seven more rappels placed them back at the base of the route from where they walked back to basecamp, which they reached at 1 p.m. on the 21st, 12 hours before a storm came in, dumping snow on camp for 3 days. Following that, they began their travels back to civilization.

This trip was made possible by the generous support of the American Alpine Club's Lyman Spitzer Cutting Edge Award, The Mugs Stump Award, the New Zealand Alpine Club's Expedition Fund and the Mount Everest Foundation. Huge thanks goes to these organizations for enabling this team to make this trip happen. 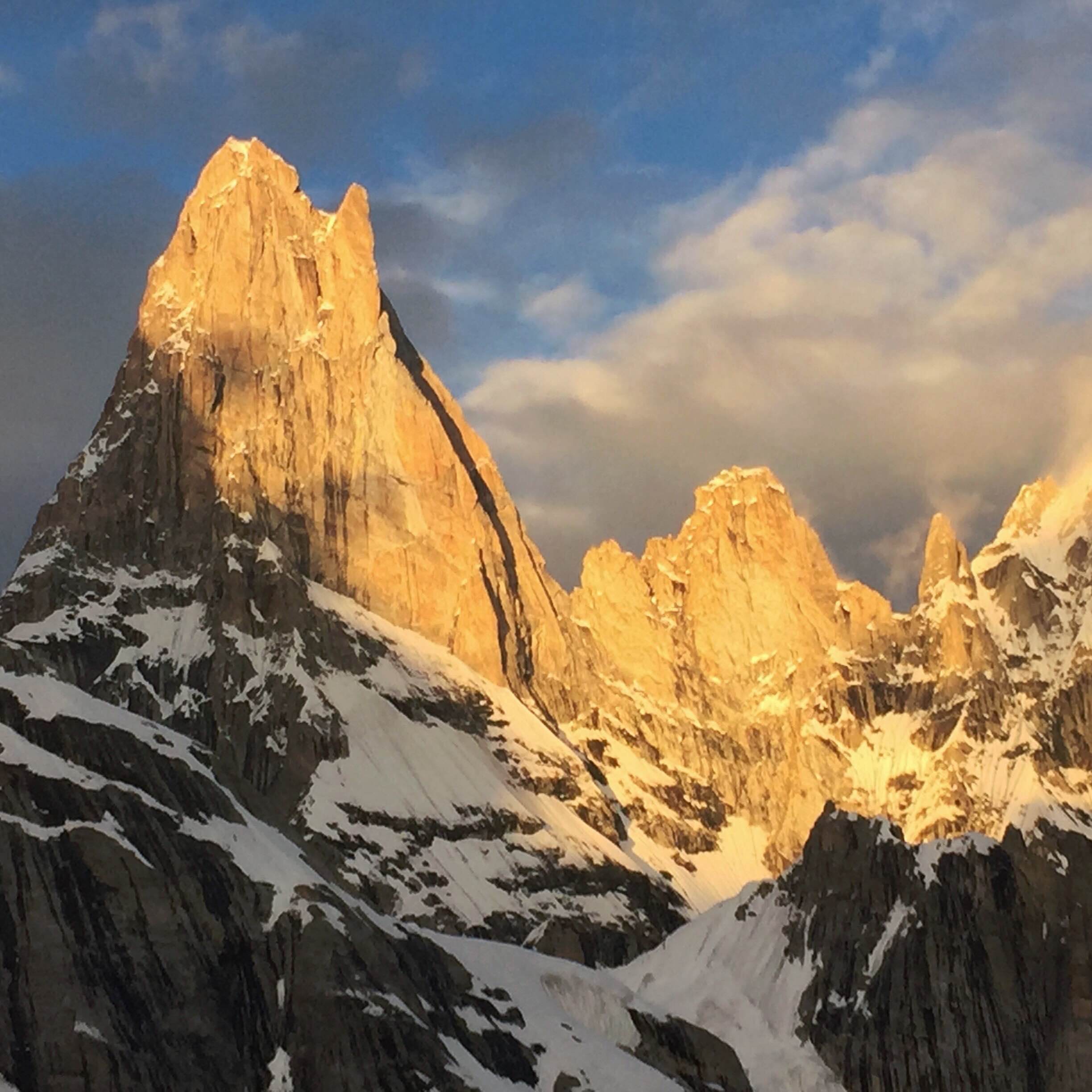 This trip could also not have been possible without the help of Nazir Sabir Expeditions, who ran the in-country logistics, the team's amazing cook Rasool and assistant cooks Nadeem and Hadim, who kept the team healthy and psyched throughout the trip, Jim Woodmency (mountainweather.com) whose spot-on forecasts allowed the team to send with confidence, and our Liason Officer Major Abbas.

Lastly, Zimmerman and Bennett would like to say a special thanks to Swenson, who brought many years of experience to the expedition and allowed them to have a hell of a first trip to the Karakoram: "Steve, you are THE MAN."