Antarctica Week Part 1: Behind The Scenes In A Remote Field Camp 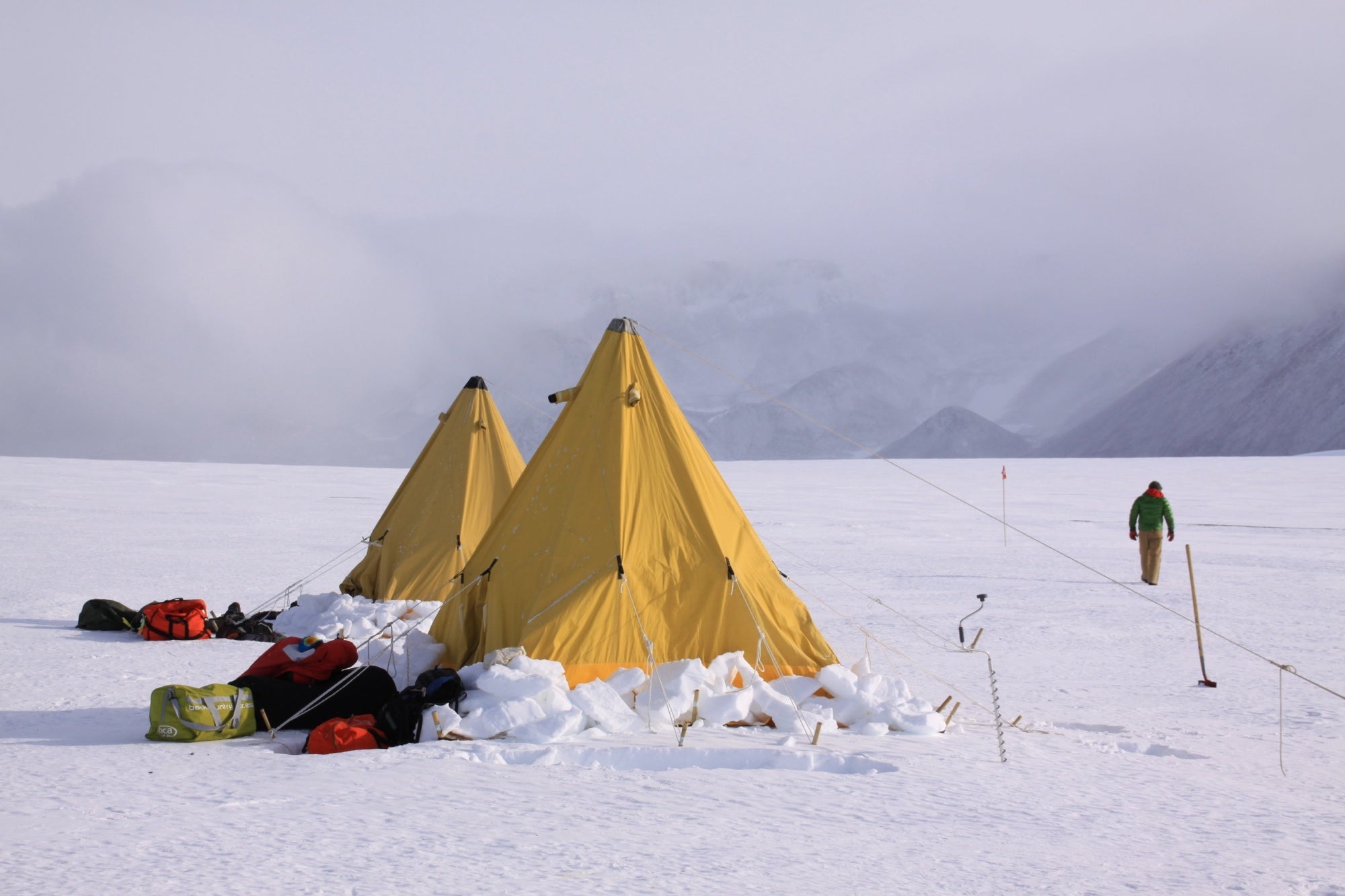 I stepped off the Twin Otter airplane onto the glacier, and the cold settled in right through “Big Red”—the heavy-duty thigh-long down parka I wore. It settled in through the down jacket I was wearing underneath. It settled past the quilted canvas bib overalls, past my soft-shell pants, past my long underwear, past my skin and muscles until I could finally feel it leech into my bones.

This wasn’t my first time in Antarctica—it was my ninth. At one point my wife did some napkin math and figured out that I had spent 10 percent of my life away from family, friends, Christmas and New Years—at the bottom of the earth. Eight of those seasons were “summers” with temperatures—if we were fortunate—rising above freezing.

But this? This cold was ridiculous. I hadn’t felt cold quite like this in Antarctica since I’d wintered-over at McMurdo Station in 1998. Maybe once in 2008 on Mt Vinson. Maybe. The blue sky above tricked the brain, but the wind was just strong enough to blow snow past our faces and whip away any of the sun’s warmth. The pilot said he thought it was reaching -30 with the wind chill. Celsius. I pulled my multiple hoods up over my knit hat, using my goggle strap to secure it all.

Gordon, my lead researcher and employer, stepped off the plane and asks, “IS IT TOO COLD?” He has to shout a little bit to be heard above the wind, past the hat, three hoods, goggles, and facemask I’m wearing. When I hesitate, he answers himself, “IT’S NOT TOO COLD!” If we abort this “put-In,” our drop into the field, who knows when we will make it back. We’ve already been delayed a week. Another team that’s juggling flight schedules with us has already been delayed for two. The Central Transantarctic Mountains, it seems, aren’t the easiest flying destination this year. The weather folks back in McMurdo say El Nino is even reaching here, in the heart of the coldest, driest, windiest place in the world. Gordon had picked this spot because of the historical ease of access, based on a historical record which was proving to be untrue this season. 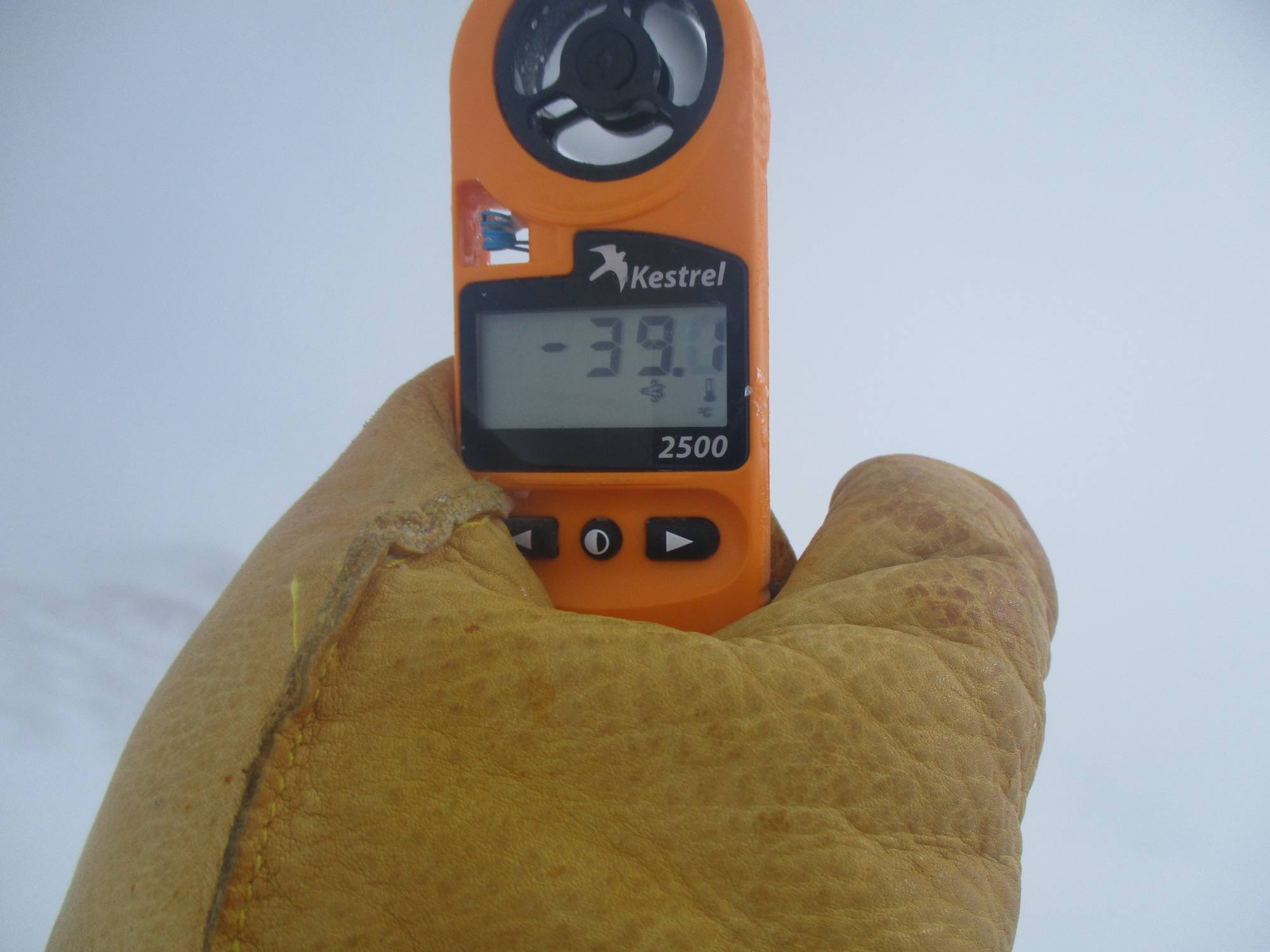 We threw up one of the Scott tents to be a wind shelter so we could sort out our situation and place a sat phone call to McMurdo Station to let them know that Otway Camp was in business, even though Otway Camp currently consisted of one tent, two people, and enough food, fuel and equipment to last five weeks unsupported.

Where we had landed was too exposed and steep for our camp, so I started up the first snowmobile and drove off to find a flatter, and hopefully quieter, place to camp. I found a good spot two full kilometers away from the landing zone. And then the snowmobile died. After a few attempts to re-start the machine, I decided it’s too cold, too windy, to try to trouble shoot the problem. Instead I tightened up the drawstrings of my hood and started walking back up the glacier, making it back just before the second flight landed.

The rest of the team arrived on the next flight: three more scientists. Greg, the other lead researcher, shouts out, “IF I HAD KNOWN IT WAS THIS COLD, I WOULD HAVE SAID NO!” Then he shrugs his shoulders, philosophical about the conditions, and gets to work.

We spend the rest of the day moving the two kilometers to camp. With only one working snowmobile, I just start doing laps moving our supply cache while the team sets up the Arctic Oven and Scott Tents. Scott Tents were designed by, and named after, that Scott. Sir Robert Falcon Scott, who so famously died with his team of starvation and exposure, stuck in a storm only a half-day away from a cache of food, fuel, and salvation. These yellow canvas pyramid tents are a signature sight in Antarctica, tall enough to stand in, wide enough that we double up and make these tents our bedrooms. The Arctic Oven, as the name implies, hails from the far north: a double-walled hoop tent that we can also stand up in, and gives us a 300 square-foot kitchen and living room. I start breathing easier with each tent that goes up. 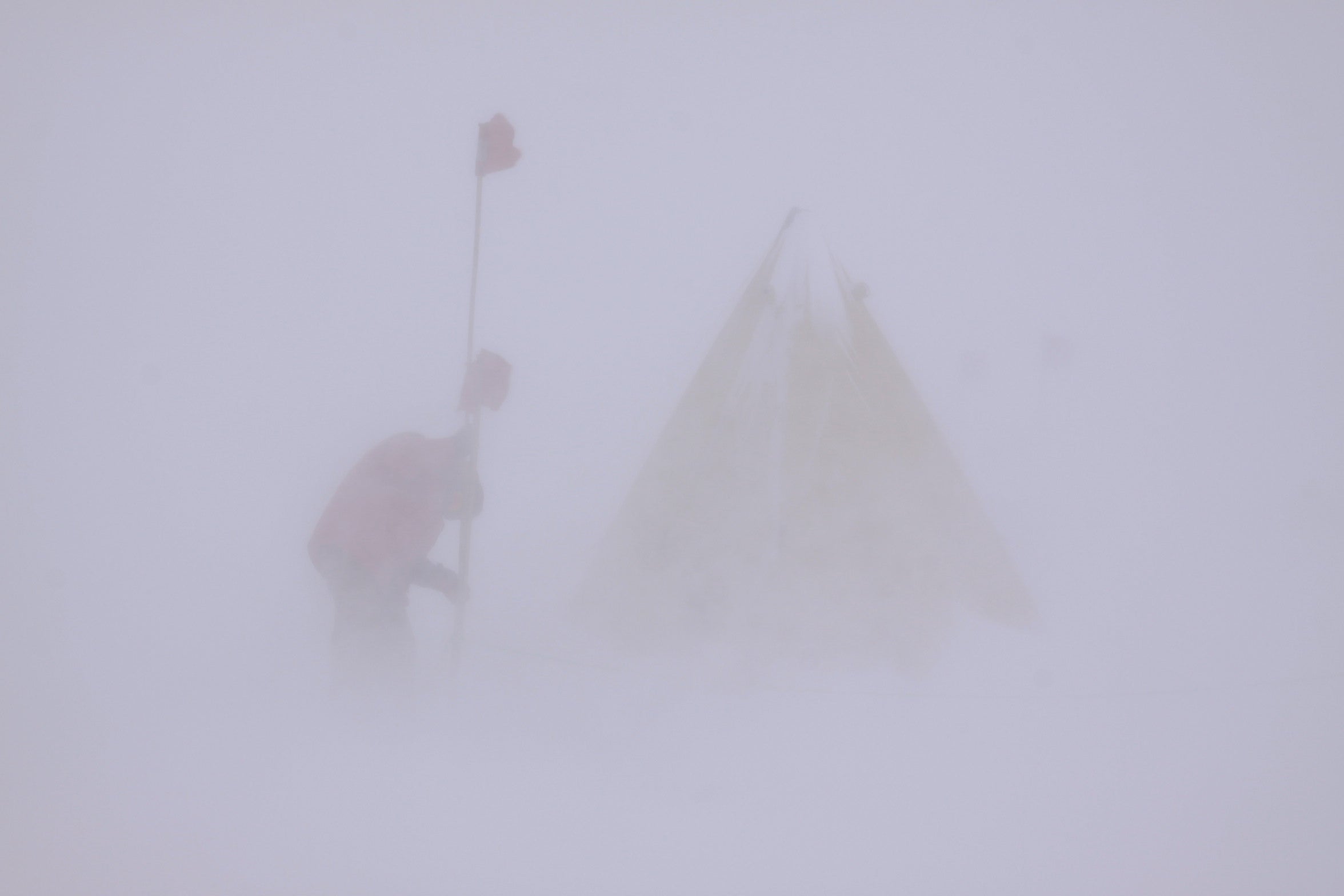 We’ve been at it for 16 hours, and I’ve drunk all my thermos’ tea. Finally we can sit down in the kitchen tent, fire up the stove and have a meal and hot drink. Hot Raro (the New Zealander version of Tang), hot tea, hot chocolate, in the end, I just start drinking hot water because I simply want to feel warm and hydrated again. We’re an odd number, so the plan was to set up an expedition climbing tent for me to sleep in solo, but in these winds that’s out the question. I send everyone else to bed, spend another hour cleaning up the kitchen and getting ready for breakfast, then pull my sleep kit duffel inside and unpack.

On top of two foam pads and a thick full-length air mattress, I’m grateful for the -40 degree sleeping bag. All by myself in the cook tent, it quickly gets cold again, so I strip down and zip up. Falling asleep isn’t hard—I can only hope this place warms up.