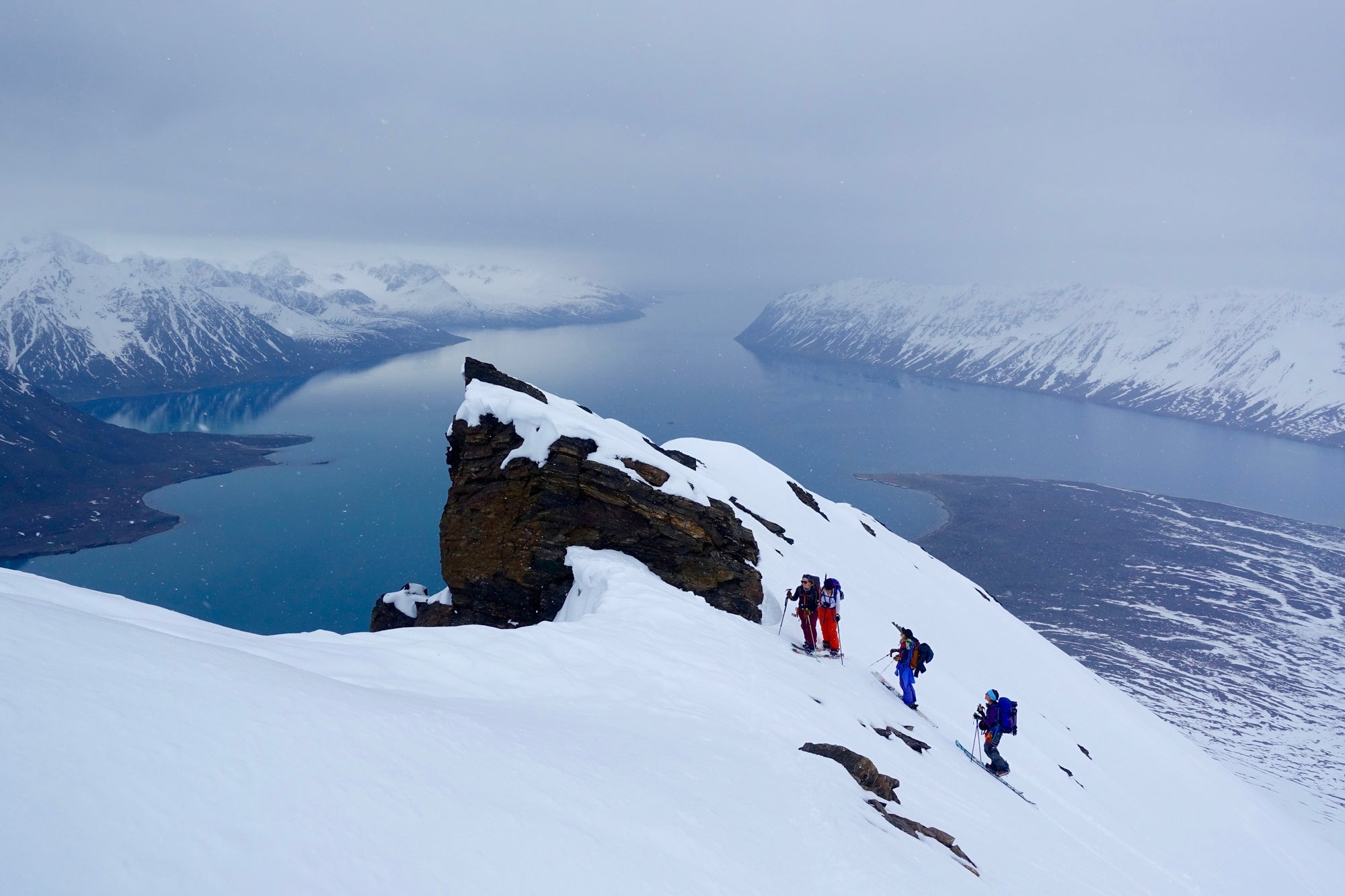 Two-thirds of the way down our ski descent, we pop out on a lateral moraine for a view of our route to the shoreline—and the boat that dropped us off there. Pulling out our binoculars, Hadley gasps, “A polar bear, I think I see a polar bear!” I see a big white rump of an animal along the shoreline. It’s at least three miles away, so it’s hard to make out. But it’s white. And furry. And pretty big. And right between us and the boat. My heart jumps through my throat. Crap.

I call Ben, our captain, on the radio. No answer. The wind has picked up and the sailboat has drifted nearly half a mile further north from us. I look through the binoculars and see Ben moving frantically around the deck. Thousands of miles from civilization, in the wilds of Arctic Svalbard, there aren’t any helicopters waiting on call to rescue us. The closest town is eight hours away by boat. If that really is a bear, we can’t go down to the shore, and our boat is floating away. So much for the “mellow warm up day.”

I call the captain again. This time he answers. I ask him to look at the location where we think we see a polar bear. He calls back and says, I don’t see any polar bears, but I see two arctic reindeer along the shore further to the north. I scan and also see the pair of reindeer farther up the shore. The five of us spend the next twenty minutes with binoculars peeled on this potentially dangerous animal. Finally, the animal turns and the side view reveals that it is, in fact—a reindeer. We all nearly collapse in relief, and laughter. Our fierce polar bear is a reindeer. We hastily return to our ski descent, focusing on our next challenge: the wind and boat situation.

The Arctic has held a place in my imagination since I was a young girl. I have yearned to experience its hardy inhabitants, midnight sun, and snow and ice filled landscapes, but never had the right opportunity until this year.

I received a call from a woman named Nayla, a budding adventure film producer out of Tahoe. She told me that she had a friend with a sailboat in the Arctic who was interested in chartering some ski trips. She offered me an opportunity to guide a group of women in the Arctic mountains of Svalbard, an archipelago of islands north of Norway. She was honest: “We need your mountain guiding expertise in the field. I need your help putting together the group of women. And, you need to be a polar bear expert.”  A Polar bear expert!? This I was not, but I have had some pretty intense and close encounters with grizzly bears. Does that count?

Svalbard has been explored, and is on the radar of many modern adventurers, but there are still no ‘official’ navigation maps available for this region, and very limited available knowledge about the skiing. I turned to some fellow guide and geologist friends who’ve been working out of Longyearbyen, Svalbard, to try and get more information. Several important things came to light:

1. Maps are hard to come by. Most maps of the region can be found at the UNIS in Longyearbyen, Svalbard. However, even these maps come with a caveat that they are not accurate enough to be used for navigation (great). They cannot be bought online. Gaia, Avanet, CalTopo, and Google Earth show deficient information for the region, if anything at all, so scratch most prior tour planning.
2. Plan on doing your own meteorology, most weather reports are unreliable at best, and weather in the Arctic can be fickle.
3. The largest population of Polar Bears per percentage land mass exist on the Svalbard archipelago.
4. Polar bears, while fluffy white and majestic, will actually eat you without any qualms (although they would rather eat a seal, you will make do).
5. One must be adept with a high powered rifle, and ready for self-defense in the rare case of a polar bear attack.
6. Don’t kill polar bears.
7. Don’t get killed by a polar bear.
8. The sun doesn’t set from mid-April through late August. You don’t need a headlamp during this time, don’t expect to sleep much either. It is pitch black from mid-November to mid-Janaury, you will need a good therapist and a sun lamp during this time.
9. Make sure you have a solid boat and an even better captain. The seas can be rough, the arctic sea ice can trap you in a fjord, and the icebergs can sink your boat.
10. Due to recent rapid climate change, arctic ice is breaking up and melting faster every year. Polar bears rely on the ice to access their main food source, seals. Without the ice to access their food, polar bears are starving. In fact, they are listed as a ‘vulnerable species’ and are likely to be listed endangered unless populations improve. These animals are very hungry. Don’t kill a polar bear unless it is about to eat you, literally.
11. Become a polar bear expert as quickly as possible, you are about to be a foreign visitor in their land. 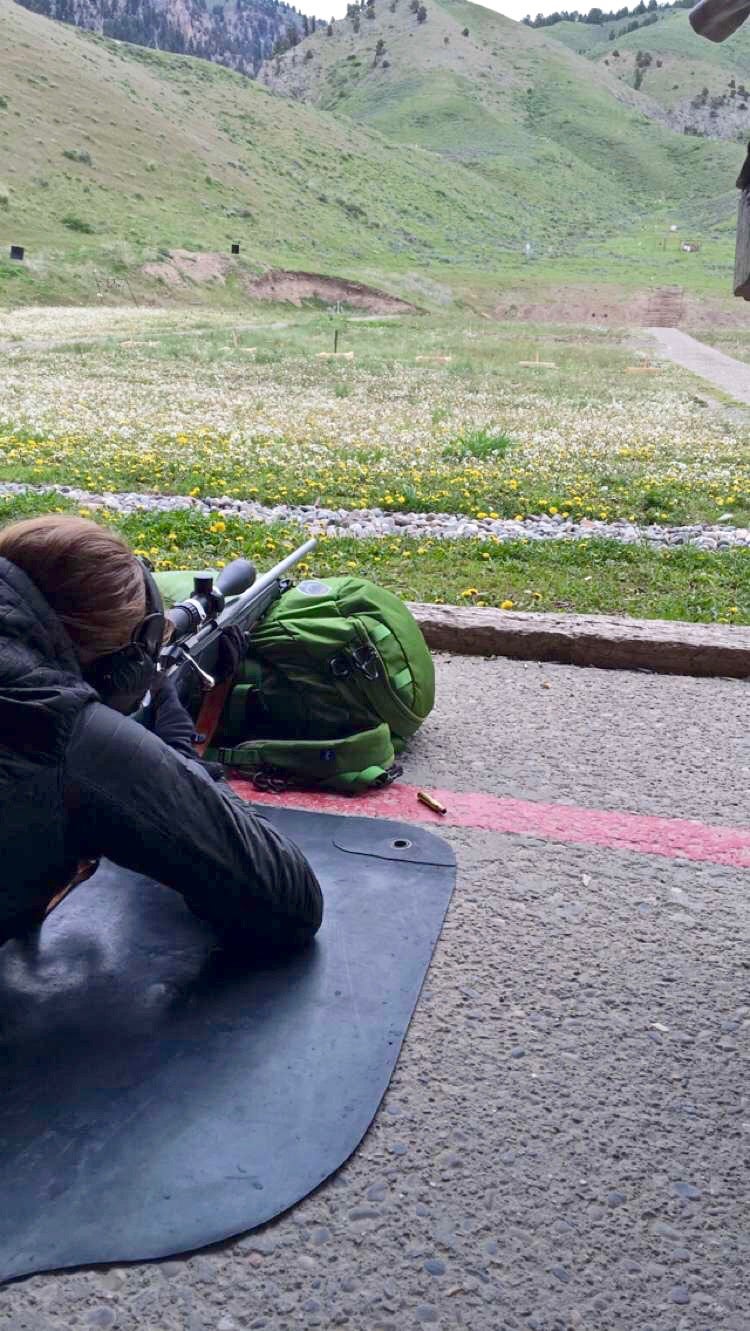 Leaving the airport in Longyearbyen, signs along the road indicated that we should not travel without a rifle beyond that point. The town of Longyearbyen, about a fifteen-minute walk from the harbor, is the northernmost permanent settlement in the world at 78.2232° N, 15.6267° E.

We find the Knüt, a fifty-foot racing sailboat, designed by Italian solo adventure sailor Alex Carozzo and made to handle Arctic waters. Our captain, Ben, is Swiss born but truly lives at home on his sailboat at sea, wherever in the world that may be. Ben is intelligent, meticulous, and reserved, but has a wry and dry sense of humor. I got the feeling we would get along well. {insert photo #6 Knüt in icy waters #7 inside the boat} 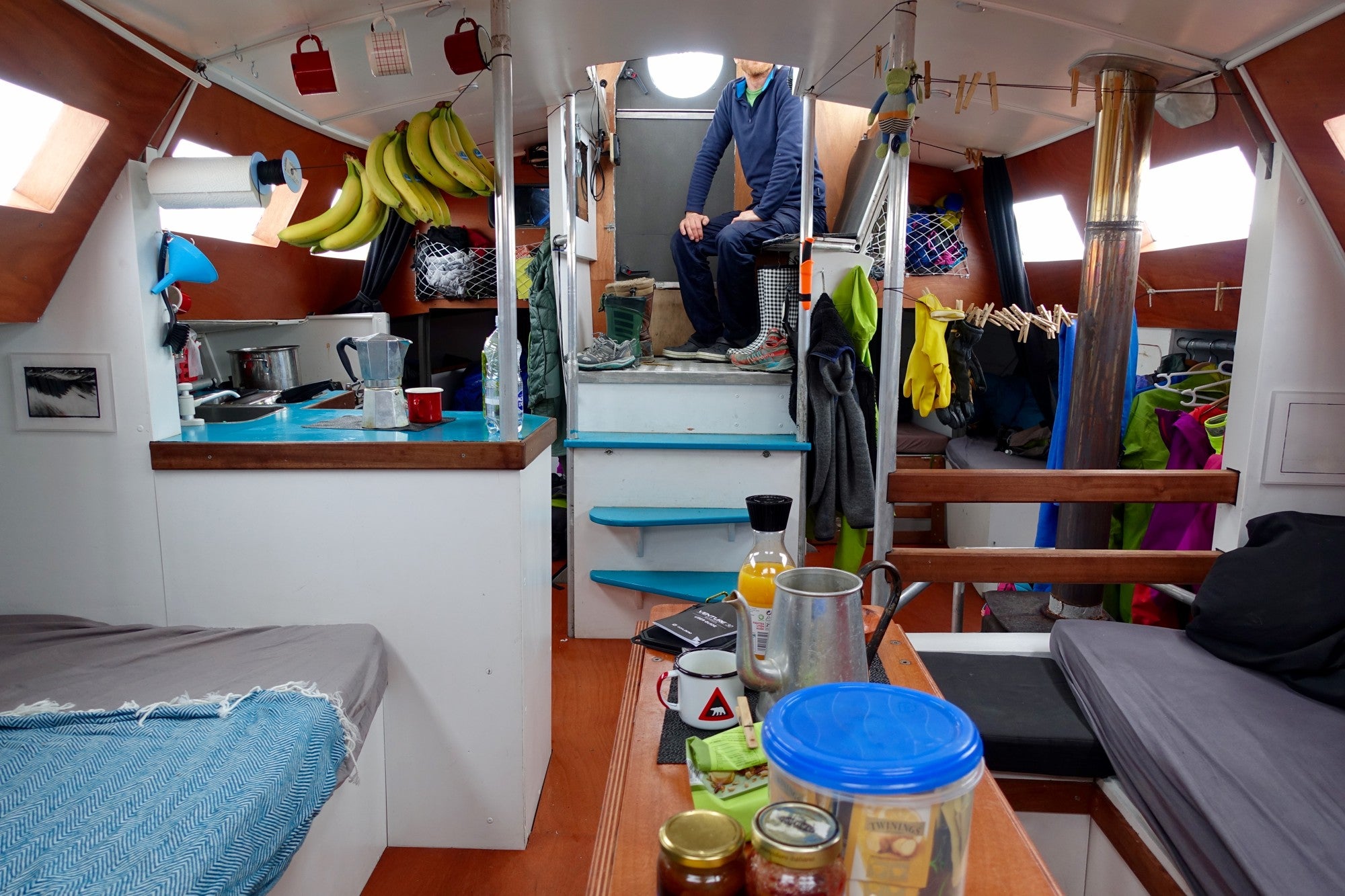 I slip into my bedroom, a 2.5’x 2.5’x6’ crawl space that is perfectly cozy and comfortable. The next thing I recall is waking to the smell of coffee and eggs, and the captain saying, “Rise and shine.” Apparently, I slept for nearly 12 hours, without even stirring. It’s the best night of sleep I have had in the last three years, since I gave birth to my first child, really. The rest of the team arrives in the morning.

We have one last task before we set sail: grocery shopping for our two weeks’ worth of food and drink. The whole thing is quite the spectacle. Locals are staring at us, perhaps it’s the four carts filled to the brim with food, or maybe it’s the additional cart with booze that fulfills the maximum government regulated allotment for the six of us? 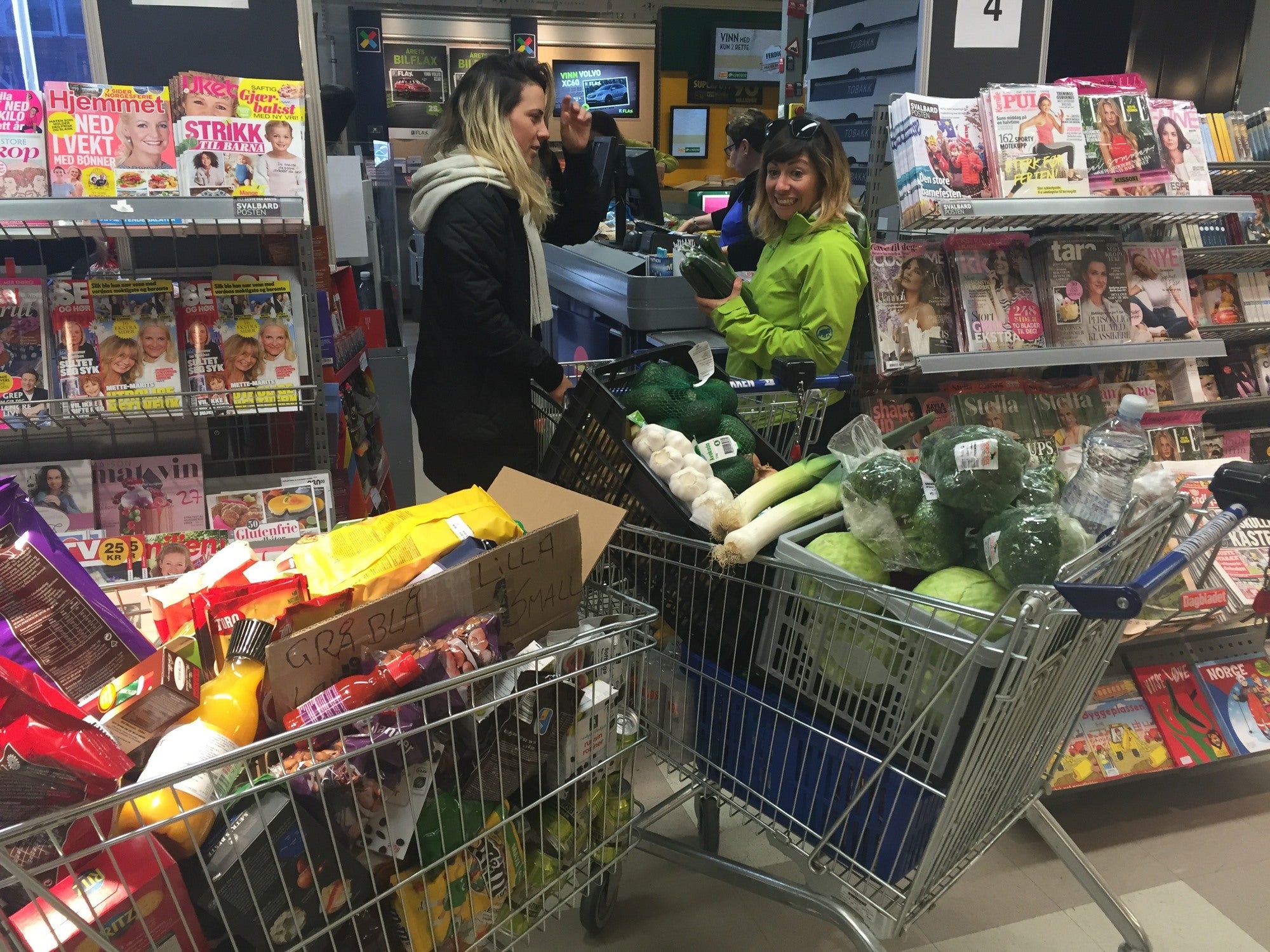 Finally we set off into the wild beyond. It’s overcast, and most of the girls are now sleeping off their jetlag. There is not a breath of wind so we’re using our motor to get us headed in the right direction. For our first objective, I have set my sights on an island west of mainland Spitzbergen, which is a seven-hour trip by boat, perhaps even longer without wind. The crisp, slighty salty air feels fresh and full of potential. Mountains and glaciers dominate the landscape on either side of the fjord. The water of Isfjorden is pure glass, creating the illusion that there is no separation between sea and sky. There isn’t a sign of civilization anywhere, not even another boat. 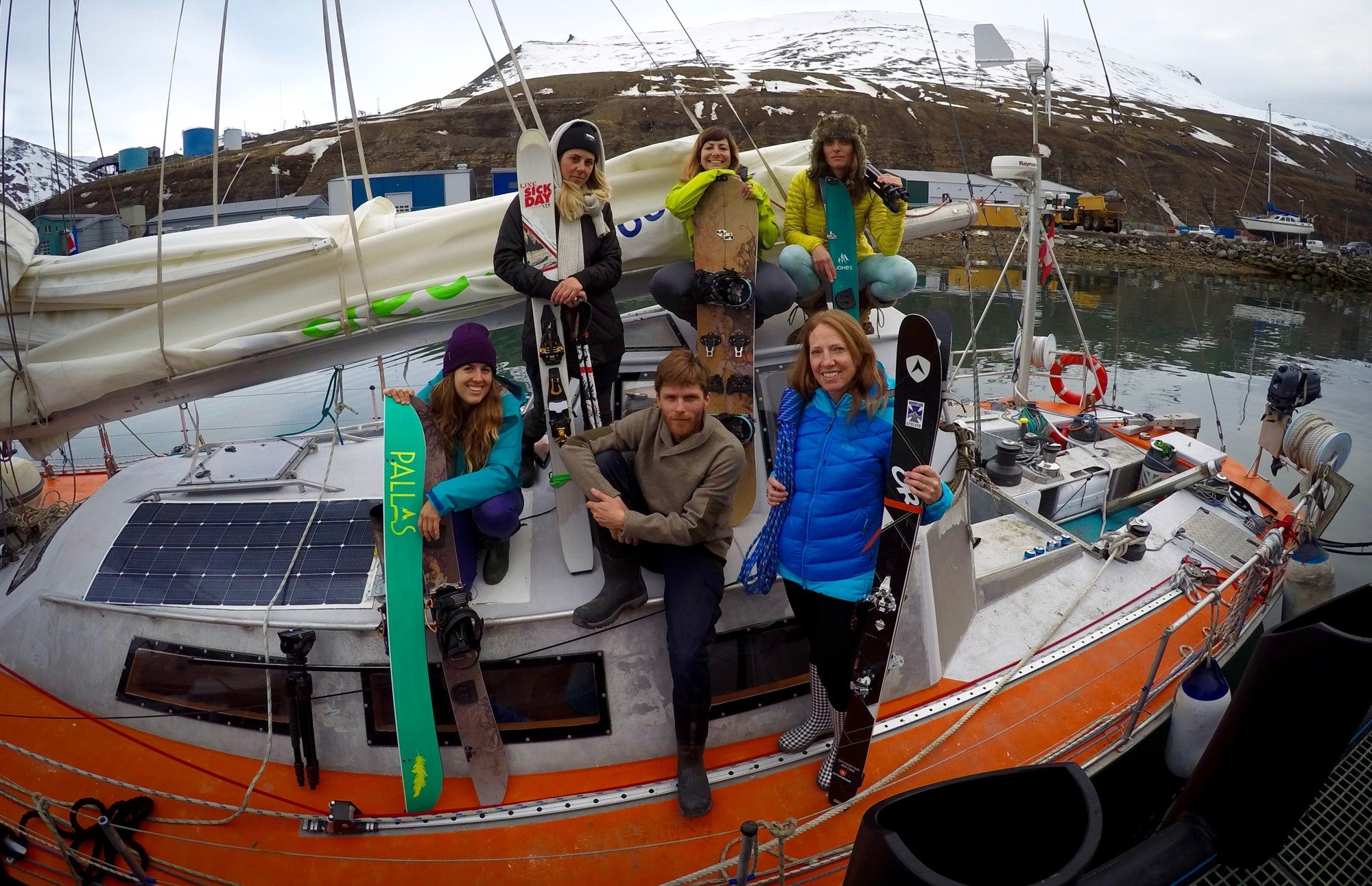 After several hours, we exit Isfjorden and temporarily travel into the open waters of the Greenland Sea. In the distance I get the first glimpse of the mountainous region we’re aiming for. The heavily glaciated peaks jut straight from the sea. 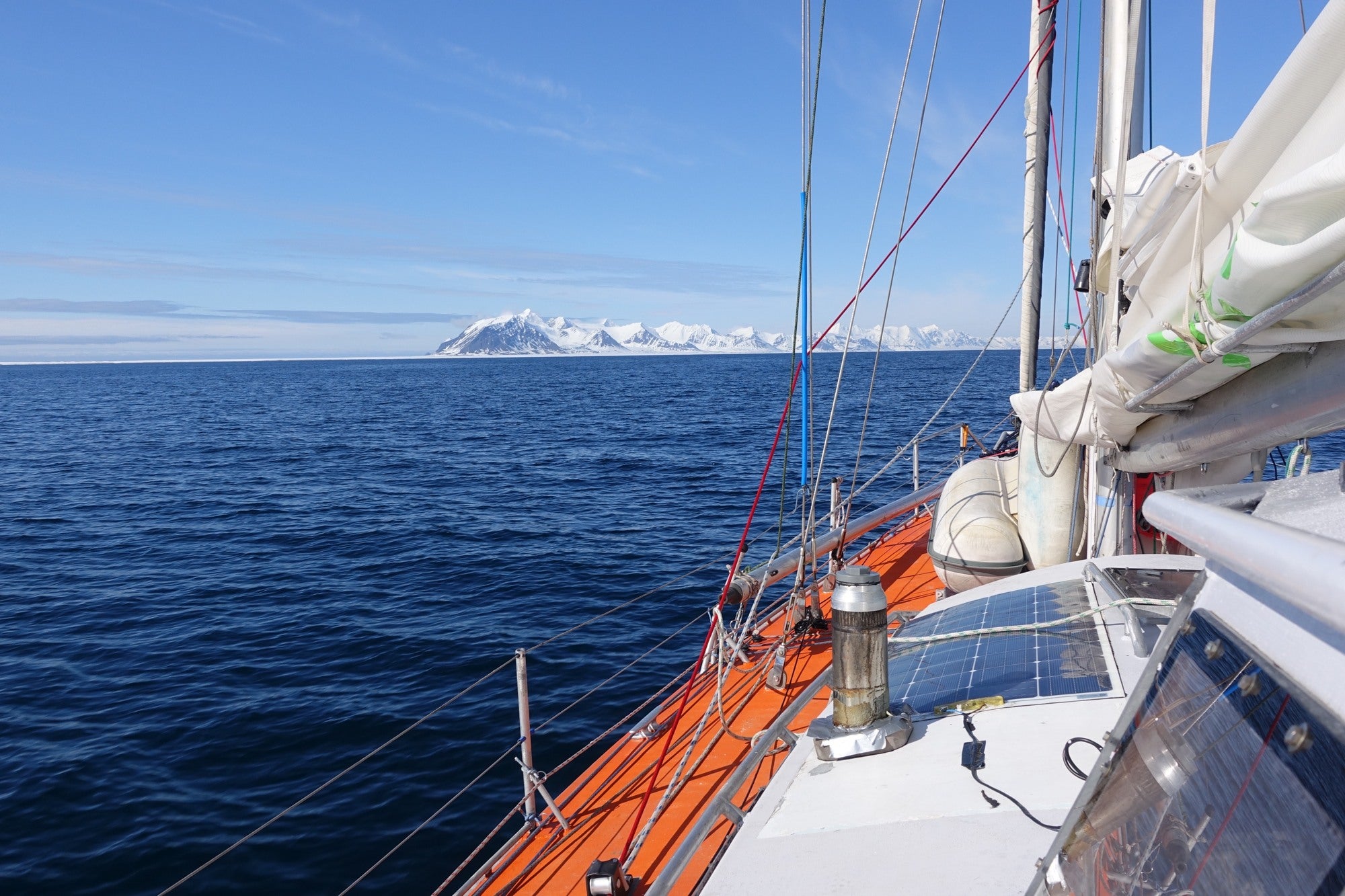 As we round the bend towards the first potential anchorage, we see a colony of walruses sunning themselves. They’re huge with plenty of blubber to survive the cold. Their tusks are intimidating, and I can see why polar bears prefer seals over walruses.

We head to shore for some crevasse rescue and rope work practice. We also use this time to get used to the flare ‘pens’ to ward off polar bears. I get dialed in with some target practice with the Tikka 30.06 rifle I will be carrying every day. The sun is still high overhead when we return to the boat at 10 p.m. Small waves lap the sides of the aluminum sailboat as we sleep and the sound makes its way into dreams and visions through the night. Tomorrow we start the real adventure. 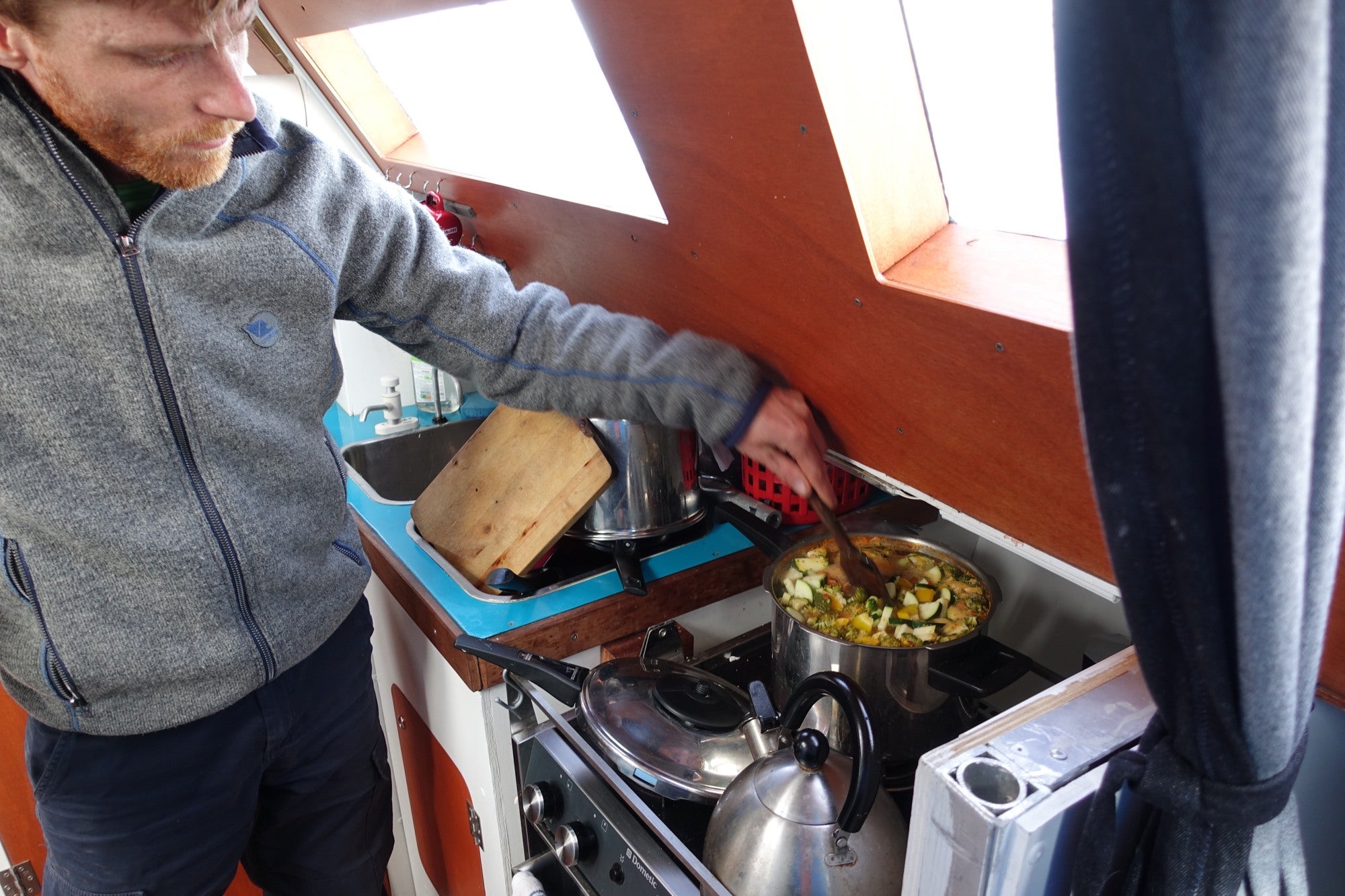 Check in tomorrow for the rest of the story of Jessica and the Knüt in Svalbard.
**
Photos courtesy of Jessica Baker and Nayla Tawa.