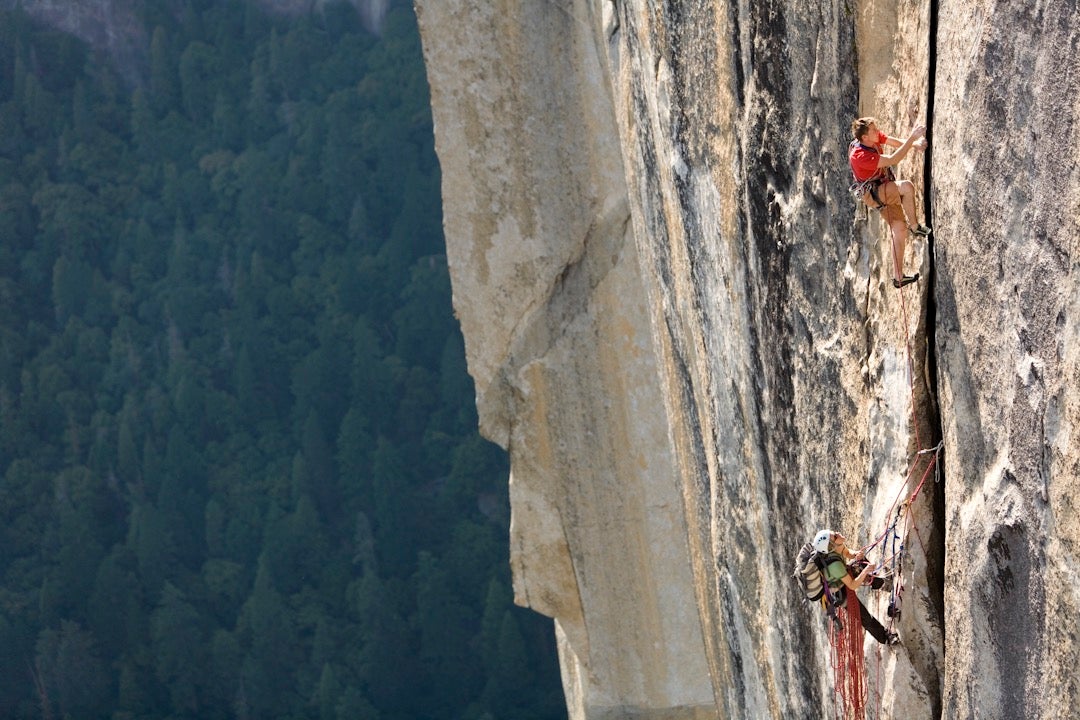 Beth Rodden has inspired a generation of climbers—and now she’s opening up to share in a monthly Q&A column on Verticulture. From her early days smashing climbing comps, her landmark free climbs on El Cap and groundbreaking first ascents like the unrepeated 5.14c Meltdown in Yosemite—to her openness about climbing as a mother, Beth’s life has been a journey in transcending possibility. Her boundary-breaking climbs and hard-won wisdom have made her an icon within the climbing community. Outdoor Research is proud to partner with Beth for a regular Q&A column! Each month we announce a topic on Facebook and Instagram, and choose a question from the responses for Beth to answer. Here's this month's winner, from @katfivekind:

One of the questions that I had after watching The Dawn Wall was how do you keep climbing after losing a significant other? Loss isn’t just through death but can be through a break up or even just one person losing interest in the sport. When you invest so much time in an activity with another person, building your own skills while encouraging them to build theirs, working through your problems together, how do you disassociate that activity from the person if they no longer do it with you?

This is such a good question and one that stuck with me. It touches on an emotional space I’ve found myself in very regularly, and still experience to some degree. I don’t know if I ever will disassociate climbing and Tommy. For me, the two were so intertwined for a formative decade of my life, that it would feel disingenuous to not remember Tommy when I thought of climbing.

Toward the end of my relationship with Tommy, I wanted to cling to climbing so badly, trying to hold onto something, anything familiar since the rest of my world and life seemed to be slipping through my hands like grains of sand. I felt that climbing was the one thing I could control, the one morsel I could grasp. In one way, I wanted to prove to myself that I still could climb without Tommy—to remember that I had climbed before Tommy and that climbing had given me independence and self confidence I needed as a teenager. Somewhere inside me was that ownership, that little bit of youth that owned climbed solely, without a partnership. But honestly, it was a hard way to try and take back climbing for myself. It felt desperate. It was desperate. I only could remember climbing how I did it with Tommy, how we worked together. I tried to recreate my day-to-day routine, but without the very person who helped form that routine. It felt like I was running up a sand dune, so desperate to get to the top but just sliding further and further down the harder I pushed. Eventually I was at the bottom. I was lost, scared and injured and needed to redefine climbing in a new way, in a way that worked for me.

I didn’t want to erase Tommy from my memory, but I couldn’t just replace him with a friend or new person instead. So I tried to learn from my hardest times and listen to what I needed to do to make climbing true to me again. I wanted to honor what Tommy and I had, what we had built, but then create another space where I could flourish without him. Even though it was blurred by hurt and hard feelings, if I put aside my ego, I knew that I learned an incredible amount from Tommy in climbing and in life. I feel that I could have let the divorce cover that up, but that wouldn’t have been true to me. So I tried to remember the good times, and when hard feelings came up, I didn’t push them down, I acknowledged them, saw them, heard and felt them, and then kept searching for what would feel right for my new relationship with climbing.

When it comes to relationships ending, it’s easy to view things in black and white—to keep a “my way or the highway” attitude. It can help you feel justified, maybe help you feel like you’re healing more quickly. But in reality, life is grey, life is messy, and I know when I can accept all of it, not just the good or the bad, but everything in between, that’s when I learn the most and heal the most.

At first, I tried to project and climb hard. But my body ended up in tatters. My climbing cascaded from 5.14 to 5.6 and left me nearly giving up on the sport, community and lifestyle that had taught me so much. But with a lot of patience and time spent with friends and by myself in the places that I love, I remembered that climbing is what you make it. For Tommy and me, it had been amazing—a partnership, a love affair, a relationship that flourished, and I think was one of history’s greatest climbing duo. And I could have let climbing be defined by that for me—by the relationship that was celebrated in the media, and people knew me for. But climbing had been something else to me before that, and I knew if I let it, climbing would be something different to me after that, too.

It took a lot of tears and perseverance to remember that. I found friends who would climb with me no matter what level. I discovered places I loved to travel to again. I started setting goals and training for them again. It wasn’t an entirely new way to climb, nor was it an entirely old way to climb. It was a mix. There was part of my teenage self, part of myself that I learned with Tommy, and part of a new, more independent self I was discovering. It felt right to have all of those pieces in my new love for climbing. After all, I wouldn’t be who or where I am without any one of those building blocks.

Tommy and I have ebbed and flowed from each other’s lives since our divorce. Since we’ve each had kids, his family has become some of our most frequent climbing and traveling companions. Last year we were climbing in Yosemite together. His wife Becca and I wanted to work on a specific climb and Tommy obliged by putting up the top rope. Becca was in the midst of a diaper change, and my husband Randy was on top of a boulder driving a ship to space with the little boys. Without much thought, I grabbed the rope and put Tommy on belay. I’d be lying if I said I wasn’t self-conscious. I know that there were lots of hard things between us that hadn’t been unearthed since. There were also lots of good things. And, there we were.

“Your knot good?” I said, almost not thinking about it, just out of habit.

He glanced down, held up his figure eight and said, “Yep, sure is.”

“Cool, I got ya, have fun,” I said, a smile slowly coming across my face. I wondered how many times I’d put Tommy on belay in our lives. But this was the first in the new context. In our individual lives of climbing. It felt different, yet the same. Like an old pair of jeans that you find in the bottom of your drawer. They fit similarly, but your body has changed over the years. They aren’t worse or better, just different.

I think it’s important to acknowledge loss or change in a relationship. If we just gloss over what was there before, it doesn’t set us up to be stronger in the future. It might feel difficult or strange to think about climbing without a specific partner who used to be such a defining part of an activity and lifestyle that’s so collaborative, but once you’ve been able to do that, it helps turn the page to write your next chapter.