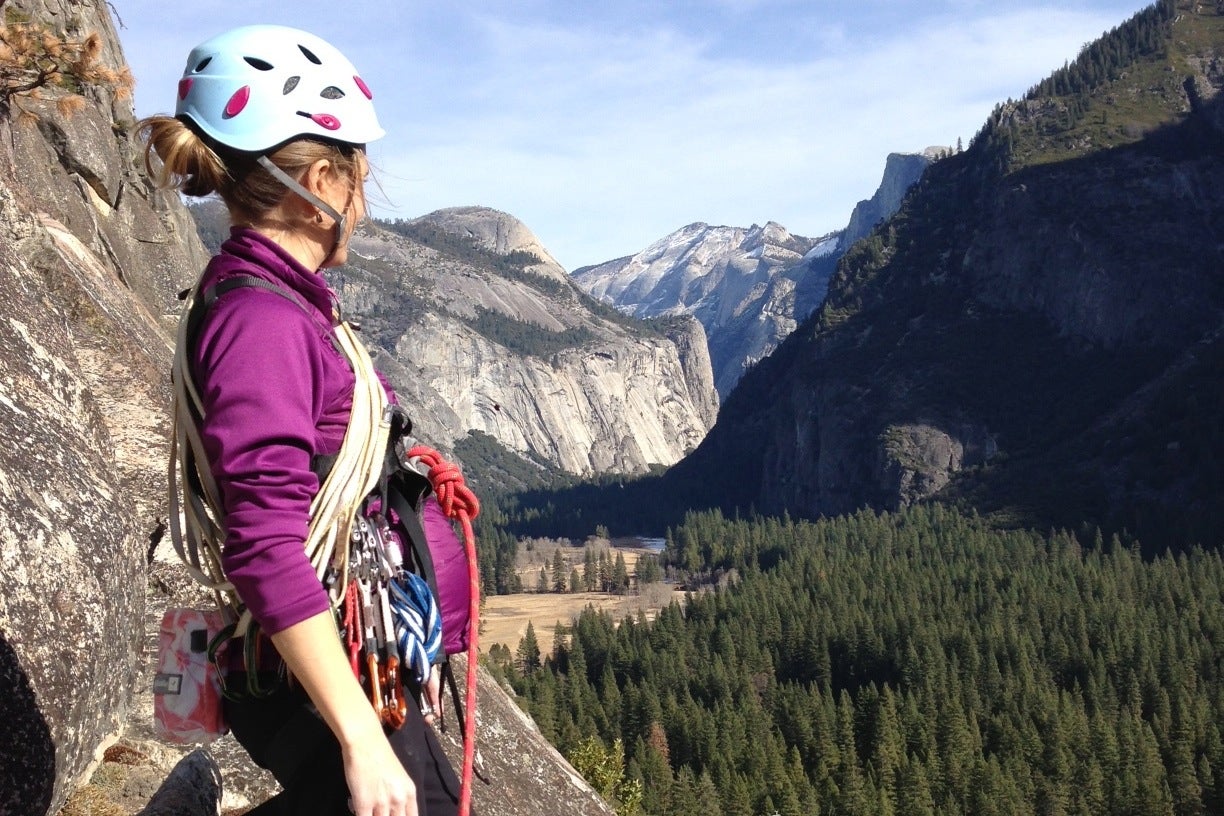 This post originally appeared on Beth Rodden's blog. For more info, follow along on her athlete page.

I'm pregnant! Wowza! Big adventures are ahead, along with exhaustion, I'm sure. We've got a little boy coming end of April and we couldn't be more thrilled.

When I first found out I was pregnant, I did a ton of research to see what other climbers experienced, and didn't find a lot out there. I want to help change this in the climbing community, to help make it an open discussion. If you research running while pregnant, the resources are endless from novice runners to professionals; but climbing while pregnant is a topic I couldn’t find much information about. I also want to share some of my personal inner worry and questioning, as I think it's something a lot of women go through, whether or not they’re climbers. It feels hard to open up about such a personal topic, but I know it would have helped me immensely if I had found a blog like this.

Climbers are perceived by the general public as being adventurous, courageous, fearless. But in fact we climbers are often neurotic and insecure in our own weird ways. And a lot of what we fret about—the couple extra pounds we put on over the holidays; the week we went without training; the tiny tear of skin in our finger; the little seeping pocket on our project; etc.—would probably seem completely trivial and downright silly to the general public.

And then there are things that most people in the general public do—getting married, buying a house, making a career, having kids—that send us climbers into a state of mild panic. We are counter culture by nature.

I was particularly concerned about how this might affect my career. Would I be able balance being a mom with being a professional climber? I know I’ve been a particularly goal-oriented climber for a lot of my career, perhaps skewing my vision of what a “balanced” life actually means. A friend of mine suggested I watch Sheryl Sandberg's TED talk on women in the workplace. It's an illuminating talk about women across the board and their roles at work and at home. It highlighted a lot of my concerns and questions about how women go about balancing a career that they are passionate about along with a family.

As a professional female athlete in my mid-30s, I’ve always perceived the topic of pregnancy to be taboo. I’ve always wanted kids, and I knew that being a climber and a mother would be a tough balance. But what worried me is that being both a professional climber and a mother seemed out of reach. And who knows if I would even be able to continue climbing professionally after having a child? Perhaps I would want to just focus my time on the child. I know these are questions many women struggle with, regardless of their career path. Being a professional athlete in a pretty niche sport, however, made it hard for me to find many examples of how it all might work out. There are numerous examples of male climbers who do it, but we women comprise a smaller percentage of the climbing population. How would you take the kid to the crag? Who would belay? I also worried that I would not be able to bounce back physically from pregnancy. Would I be able to climb and represent my sponsors adequately after a child? How would the industry take to the news?

With these concerns swirling through my head, I’d always told myself that by the time I wanted kids, I’d have long since retired from professional climbing and doing both wouldn’t be an issue. However, as I came into my thirties, I realized that I wanted to achieve both. I love what I do, I love who I work with, and I also really wanted to try to have a family. I just had to get past my fears and this built-up stigma.
Last summer I had a turning point when I sat down for dinner with one of my best friends and another professional female climber at the semi-annual Outdoor Retailer Trade Show. We talked about marriage, climbing contracts and food, but the conversation naturally steered toward the topic of having kids. To be honest, it was the first time I had ever completely opened up about kids with another female professional climber, which I suppose is indicative of how deep these fears ran within me.

I told her how much I loved climbing, and being a part of this industry and community. I have projects I’m psyched on. I love pushing myself in the vertical world. I’ve been climbing since I was a kid, and I honestly can’t imagine life feeling complete without climbing.

“You should do it,” my friend said. “Think of it as an opportunity. You want kids. You want a career. Try to make them both work for you. Look at all the women and moms out there in climbing gyms, at crags, at the boulders. It's a natural evolution.”

It was maybe the final push I needed. I returned from the Trade Show and talked with Randy. He was ready, and had been for a while. Always the optimist, he had been telling me that we'd make it work no matter what. I knew that our lives would change with kids, and even if my career suffered, it would be more than worth it. I thought about what I’d regret more: not sending a handful of routes, or passing up the opportunity to have children. The answer was clear.

My doctor told me a while back that, on average, it takes about a year to conceive. With that in my head, I figured I had another couple seasons on my project and a few more trips overseas. But, it turns out for us, that birth control stuff really does work. One and done. At the end of August, I took a pregnancy test, then took another one to make sure, and that was that. We were pregnant! It was weird to “try” just one time and have it work. We felt especially lucky, as we know so many people for whom conceiving takes time or is impossible. On the other hand, it also provided us no build-up or anticipation. All of sudden we’d crossed that threshold and were facing a very different future from the one we were looking at the day before. We were going to have a baby! Let the new adventures, and exhaustion, begin.

I’m normally a pretty private person, but this new change is something I wanted to talk about with other moms and moms-to-be, to learn from their experiences and help me with all the different emotions I was experiencing. Randy wanted to tell everyone right away; his excitement poured out of him. But with so many people we know having had miscarriages, and with my still-lingering anxieties over how it would affect my career, we kept the news quiet.

Day by day, anticipation and excitement grew and ultimately I overcame all those concerns and fears. We were going to have a kiddo after all! How exciting is that? After the first trimester, I was finally ready to call my sponsors and tell them. Slowly, after each phone call and supportive response, I became less scared. People were very happy and thrilled to hear the news.  "Can we post it?" "Will you blog about it?" As I became more open and sharing, I began hearing about all the other women athletes who managed the demands of their careers and motherhood, or who had been happy to evolve into a different role in their careers. Was this apparent stigma, this not-to-be-spoken-about topic of pregnancy among professional outdoor female athletes, all in my head all along? I don't know, but their excitement and support was so amazing that it made my three months of silence seem silly.

I regret not telling people sooner. I’ve realized that I wasn’t trusting enough. I wasn’t confident enough. But after such a positive response, those first three months seemed like a waste of valuable energy, and I could have been talking with friends about how awful the nausea is.

So begins my series on pregnancy. As with all pregnancies, we have had some bumps in the road, but it's been such an amazing time for growth and learning.

As soon as I found out I was pregnant, I researched as much as I could online for other climbers and athletes who had been through the same thing. I found some great stuff, but I also had many questions that I couldn't find answers to: How does the relaxin hormone figure into climbing? How long can I lead belay for? How long will it take me to get back? And so on.

I want to document my pregnancy from the beginning until where I am now and forward. I will also interview some amazing mom athletes to hear their stories and learn from them. And if you have any questions, I invite you to contribute to the discussion. Send me a message on my athlete page with the topics that are on your mind.

Climbing past my pregnancy stigma was one of the scariest “routes” I’ve done. But, if I’ve learned anything from climbing, it’s that often the biggest fears are in our head. Once you get past those fears, you experience some pretty incredible moments of freedom, support and relief.