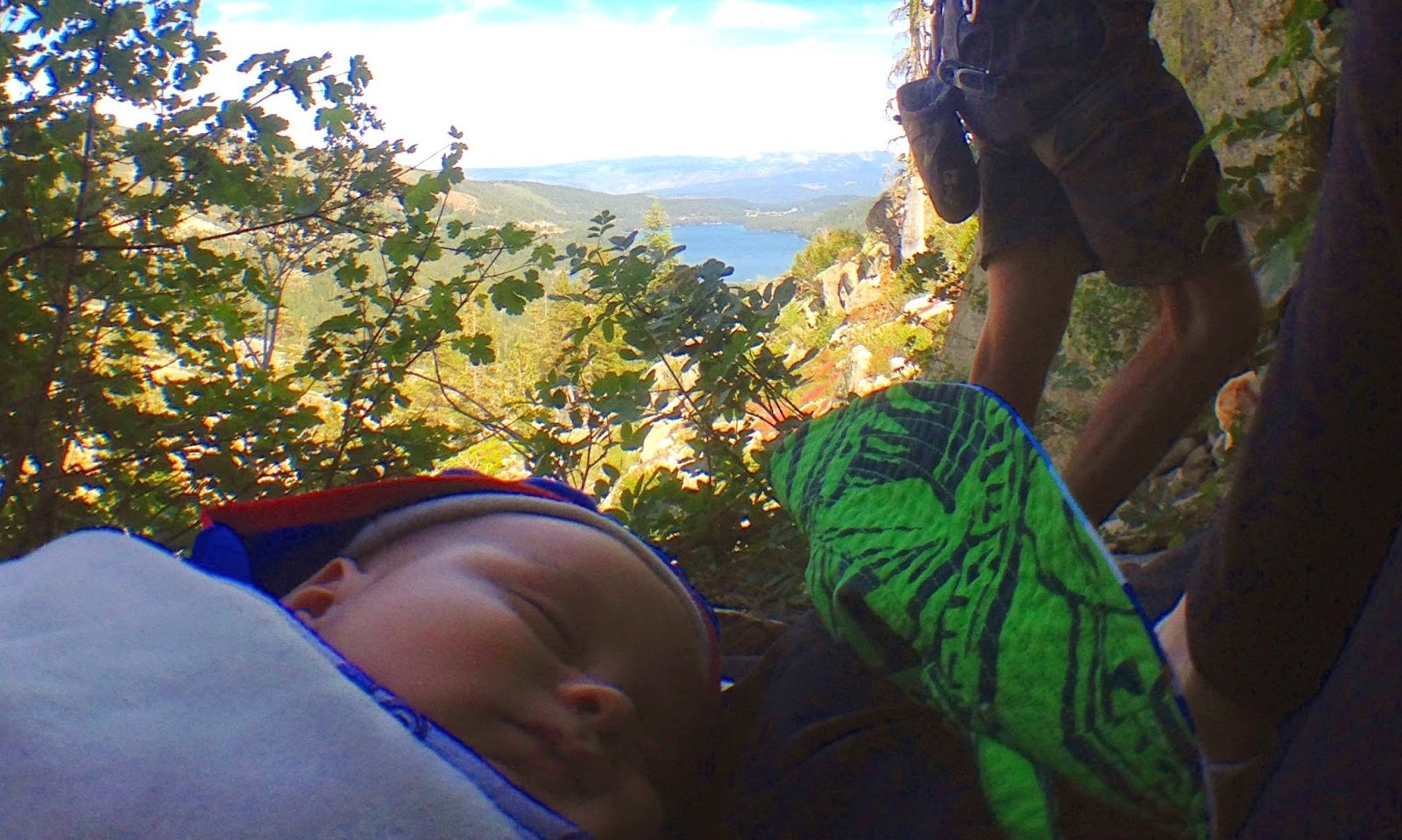 About seven weeks post birth, I was chomping at the bit to get back to the mountains. Being dwarfed by those magnificent Sierra mountains and their awe-inspiring granite rocks feeds my soul. I even would’ve taken sitting around beside a river or a cluster of boulders and not doing much of anything at all. It was time to get out of the house! Plus, I really wanted to show Theo the mountains and not just the inside of our bedroom. I almost felt like I was doing Theo an injustice by not showing him this other world that is so important to our way of life.

I was still in a lot of pain from my slow postpartum recovery. I know I’m a slow healer in general, but I’ve had about four bouts with infectious mastitis, most recently slapping me down with a 103-degree fever that wouldn’t break despite antibiotics and Advil. I had to resort to taking a cold bath, which is as unpleasant as it sounds.

I’ve also had a hard time with breastfeeding. I had no idea that this aspect of being a mother would ever be so challenging. I used to think that breastfeeding would be one of the more natural and easy things about being a parent. You make milk, feed the baby, and the baby grows. Turns out, it doesn’t exactly work that effortlessly. I’ve heard from many women who have also struggled with this, too.

I was sick, tired, and stressed about getting Theo enough milk. But on top of all that, I was getting anxious and impatient. I needed to get out. The mountains were calling.

Being active again after a break due to injury or otherwise normally sounds like the most wonderful thing in the world. I remember being so stoked on climbing after recovering from my shoulder surgery. Yet after nearly a year of being pregnant and a difficult postpartum recovery, the thought of exercise seemed so foreign to me that it almost didn’t even enter my mind. Feeling incapacitated, slow or sick had become a “new normal” for me—my new paradigm for how I view the world and even how I see myself. That desire was, sadly, just absent. Worse, I didn’t even recognize that I was in such a rut until my sister-in-law said, “You must be dying to get out.” When I realized that I hadn’t even been thinking about nourishing this part of my soul, I knew something had to change.

We considered a trip to Yosemite, but it would be a fairly long drive for me to sit upright the whole time. Plus, that area was being ravaged by forest fires. Instead, we opted to spend a weekend in Tahoe to see our good friends, Adrian and Emily. It takes a special type of patience and graciousness to host a 7-week-old’s first trip away from home. Emily and Adrian are those types of seriously awesome people who were willing to give it a shot and open their home in Squaw Valley to the four of us: me, Randy, Theo and our dog.

Theo did great for his first getaway. And Adrian and Emily went above and beyond the call of duty in terms of being patient and gracious hosts. We took Theo to the Tahoe beach and dipped our feet in the water. We also tried taking Theo to his first crag: the Snowshed wall on Donner Summit. For those of you who have been to this roadside crag, you know the approach is a fairly easy two-minute walk. But it probably took me 30 minutes just to hike up to the crag. Adrian, one of the most experienced high-altitude mountain guides in the world, had to employ his expert mountain-guiding skills and push me through a few spots. It was hilarious—well, at least I tried to have a good sense of humor about it! But the truth was it felt like I was walking with a pair of sloppy sea legs on the uneven ground. My knee joints wobbled, my ligaments shook and my insides felt like they were going to fall out.

But I didn’t care. Just getting outside was perfect. I took in that musky pine-scented mountain air and it immediately lifted my spirits and evoked fond memories of life as my former self. It was exactly what I needed.

There’s a saying, whose origin I don’t really know. But it goes: How do you eat an elephant? One bite at a time. If I think about where I once was as a climber, and where I want to go and all the climbing routes out there I still want to do, and I compare all of that to how long it took me to simply “hike” up to the Snowshed wall, I would break down into tears. But in a weird way, all the injuries and frustrations that I’ve been through as a climber have prepared me for surviving both pregnancy and a tough postpartum recovery. Like eating an elephant, one bite at a time, I need to be patient with myself and take baby steps one at a time.

Everything comes back when both the intention and the patience are there in full force. It’s ironic that now if I want to climb again, I need to first learn how to take baby steps—literally and figuratively. Fortunately, who better to teach you how to take baby steps than a baby? I have Theo here to keep me at just the right pace.

When we returned from Tahoe, I was inspired to take one more baby step forward: I went swimming. The swimming part of it was easy, but just getting into the water was tough. I hate to say it, but I was embarrassed about my body. Now at three months postpartum, I still had a good-sized belly and zero muscles. I looked in the mirror and I heard this weird, negative voice of society telling me that I should be back to looking fit and strong by now. After all, you always hear about all those women who return to their old weights, sizes and athletic achievements within a shockingly short period of time after giving birth. And here I was, a professional athlete—of course I shouldn’t look like this now!

But I did. And I had to accept it. Part of taking baby steps is that you actually have to take them. As soon as I got into the pool, it felt like the perfect thing for my body. I was weightless, which really helped my cystocele and relieve the pain and pressure inside my body. It felt good to move my joints through a gentle full range of motion. Normally, I would swim laps, switching up the strokes and doing different workouts. But on this first day back, just getting into the pool was a big baby step. I just floated and enjoyed a moment of zen in which I had no desire or expectation for myself. I didn’t need to push it.

The next day, I was sitting with Theo outside the climbing shed, keeping Randy company as he trained. I stared at the holds and remembered the problems I used to do. And for the first time in over seven months, I felt a real desire to climb again. I knew I wasn’t ready, but this feeling of desire, which had so unexpectedly and so organically risen to the surface, felt monumental in and of itself. It was the manifestation of intention (the first and most important of all baby steps)—of who I am going to strive to become, once again.

And now, it’s just a matter of patience. And taking baby steps, one at a time.