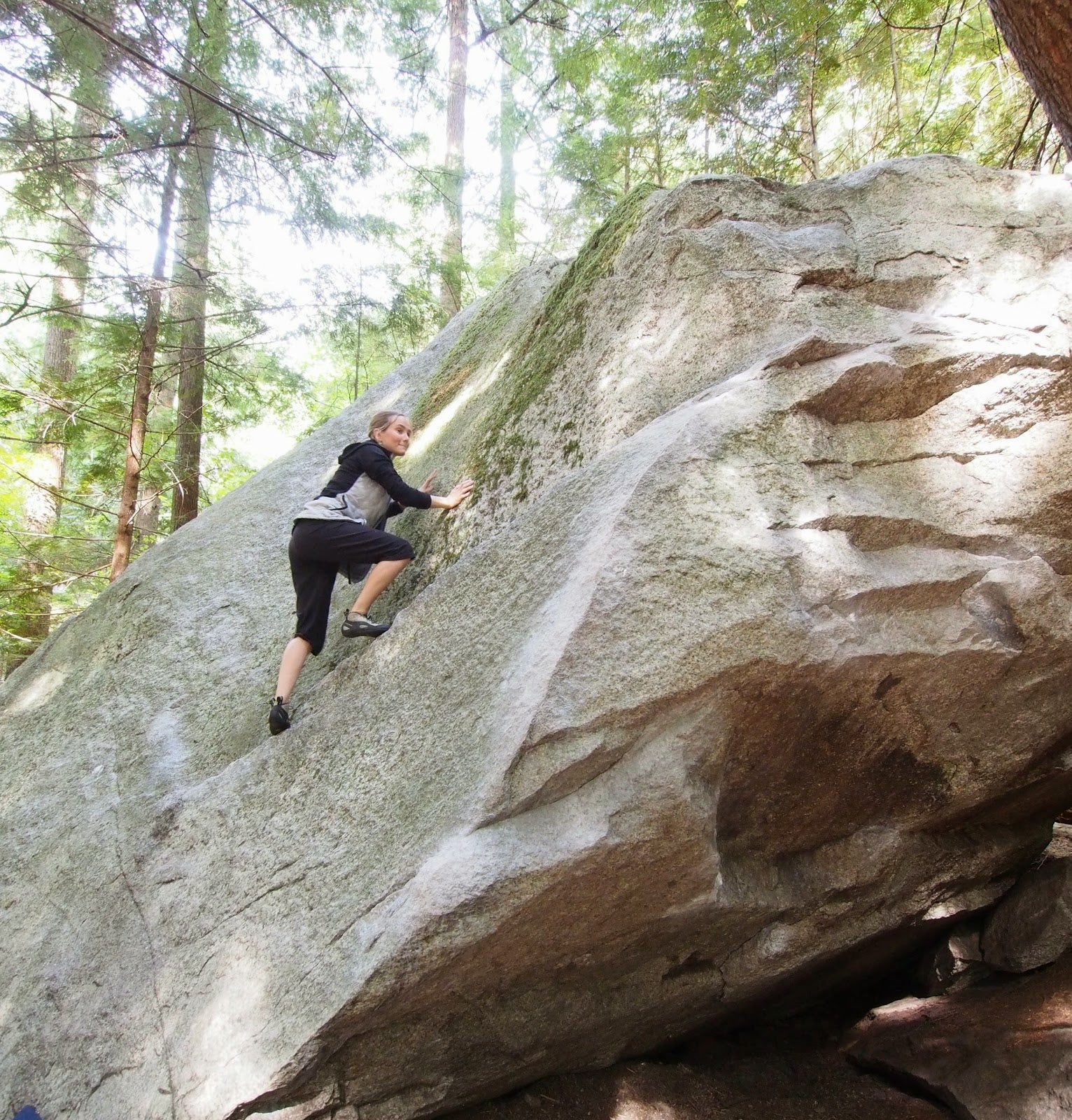 Before Theo was born, we had big aspirations to start traveling with him right away. Our friends had taken their 2.5-week-old son to Font, in France, for a month-long climbing trip. Another set of friends had done the same with their 5-week-old son. Naively, I thought I’d be right there with them.

“See? Kids aren’t slowing them down,” I said optimistically to Randy a few weeks prior to Theo’s birth. “With your upcoming paternity time off, it would be great to take advantage and do some trips together as a family!”

We spent the rest of the afternoon penciling trip ideas into our calendar. We planned to head to Yosemite the week after birth. Then we’d go to Japan for Randy’s big family reunion. Then we’d go to France for our friends’ wedding. Then Norway. Then back home for a week. Then Kauai for a “real vacation.” Then a road trip to Squamish to climb. Phew! Randy and I were teeming with excitement. What a great way to spend the first few months of being first-time parents together!

I mentioned these plans to Jamie, our amazing friend and midwife, and I wish I could’ve somehow captured and immortalized the look on her face. It was classic. She looked beyond dumbfounded. And in her amazingly calm and kind voice, she said, “Wow, that sounds like quite an adventure. Just be kind to yourself if your body doesn’t feel up to it.”

What she really meant, of course, is “when”—not, if—“your body doesn’t feel up to it.” Boy, was she right.

As I recently wrote, my postpartum recovery was anything but the fast-and-light path back to 5.14 routes and daily triathlon-grade training regimens that you so often hear about from the few women who are able to recover that quickly. I applaud anyone who is able to return to their old selves so rapidly after a pregnancy, but I would say that those people are the exceptions. Most women that I’ve heard from through this blog and in my life have come forward to say, “Thank you for writing about the other side of recovery. Because all you hear about are those who are running 5Ks within the first two weeks of birth.”

It turns out, that’s just not how it works for many of us new moms. I wish there were more stories out there that told us not to put pressure on ourselves to perform right away. After all, we need reminders that we just created a new human life. And that “performance” in itself is one of the most incredible things I know I’ve done, not to mention also one of the toughest—both on my body and my lifestyle. As a new mom, I know I need constant reminding that I owe it to myself to take the time I need to replenish my energy reserves until I have enough to actually be effective in those other important areas of life—whether that’s climbing, running or whatever.

The better part of our whirlwind global tour didn’t happen as planned because I was sidelined for three months with prolapse and several bouts of mastitis that spiked my temperature up to 103 degrees.

As Theo approached four months, I finally started getting out and doing things. After our Tahoe trip, we returned to our home in Yosemite. Being in Yosemite after so many months away felt like the greatest dose of medicine for my soul. Waking up with those familiar Sierra smells, the birds outside our window, and those familiar hikes I did while pregnant was incredibly restorative for my mood and psyche. I still spent the days as always: nursing, sleeping and playing with Theo. But here in Yosemite, I felt much more calm and patient, and had much more energy to do everything. I finally got to show Theo all the wonders of Yosemite that I’d been dreaming about for so long. His big brown eyes would light up as he stared up at the towering Ponderosa pines. We stood in a field in Tuolumne as the wind tickled his face and caused him to laugh.

I thought back to myself being a kid on backpacking and camping trips in the Sierras with my family. I remembered how excited I was to load up into the car with my brother and parents and head out to find an alpine lake to swim in. Now I felt this incredible sense of duty to be in a position to pass on these wonders to my son. Swimming in alpine lakes and climbing and playing on the rocks in Tahoe were things I grew up with. And I know that they will be things that Theo will grow up with, too. 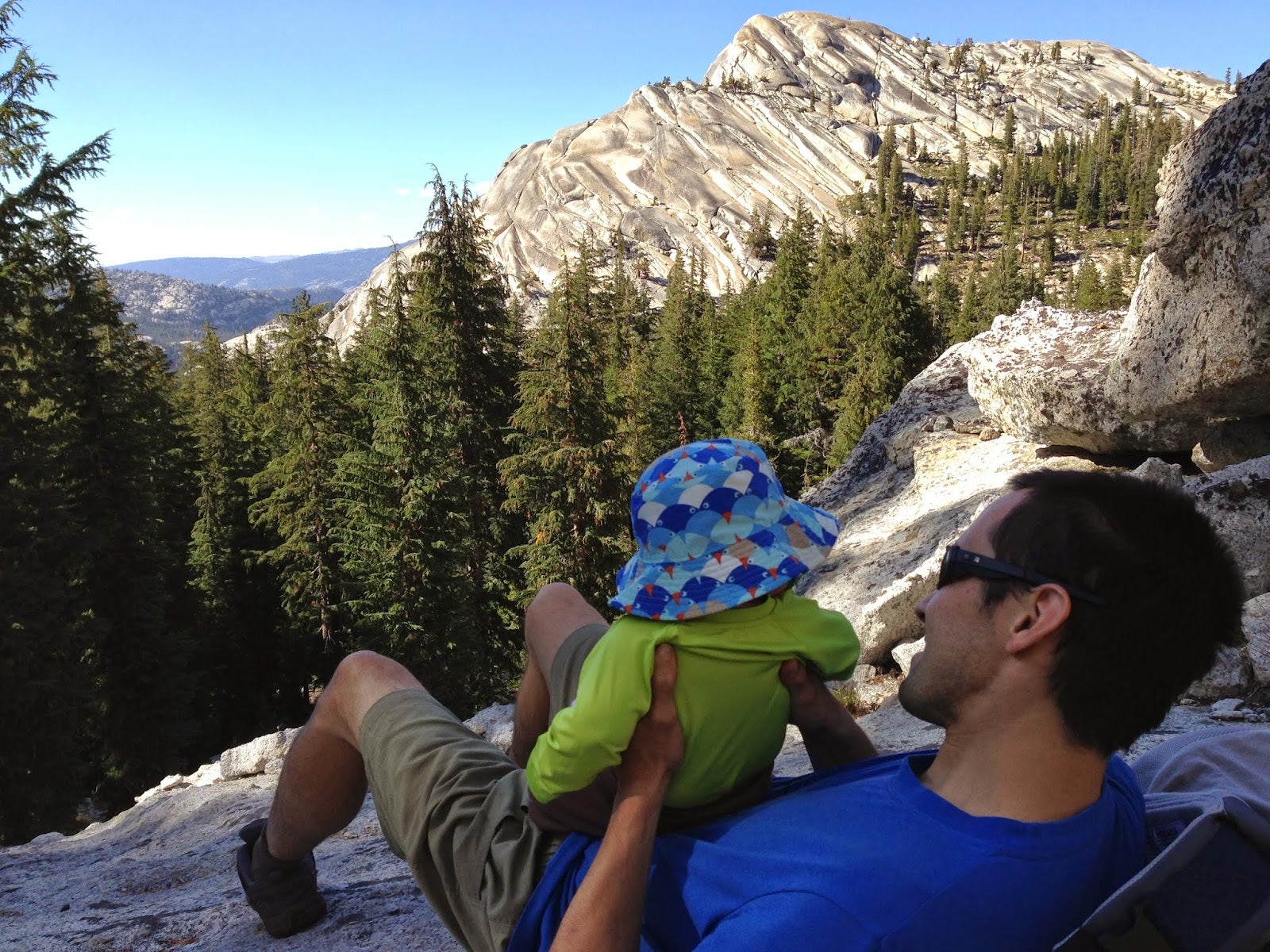 From Tuolumne, we headed home and prepared to fly to Hawaii for a vacation. I had a healthy dose of anxiety about flying—an activity I dislike in general anyway, despite it being a major part of my career—for the first time with a baby. I suspect most parents go through the same anxieties. A bunch of questions nagged me: Did I pack enough stuff? Was I bringing too much? Was he going to scream the whole flight? Fortunately, Theo did great. He slept most of the time. In fact, I really could’ve learned something from him and his calmness!

On Kauai, I swam every day, which was exactly what my body needed. That feeling of weightlessness is such a brilliant sensation. It’s the opposite of pregnancy in many ways. It’s what it feels like to be climbing really well, too. 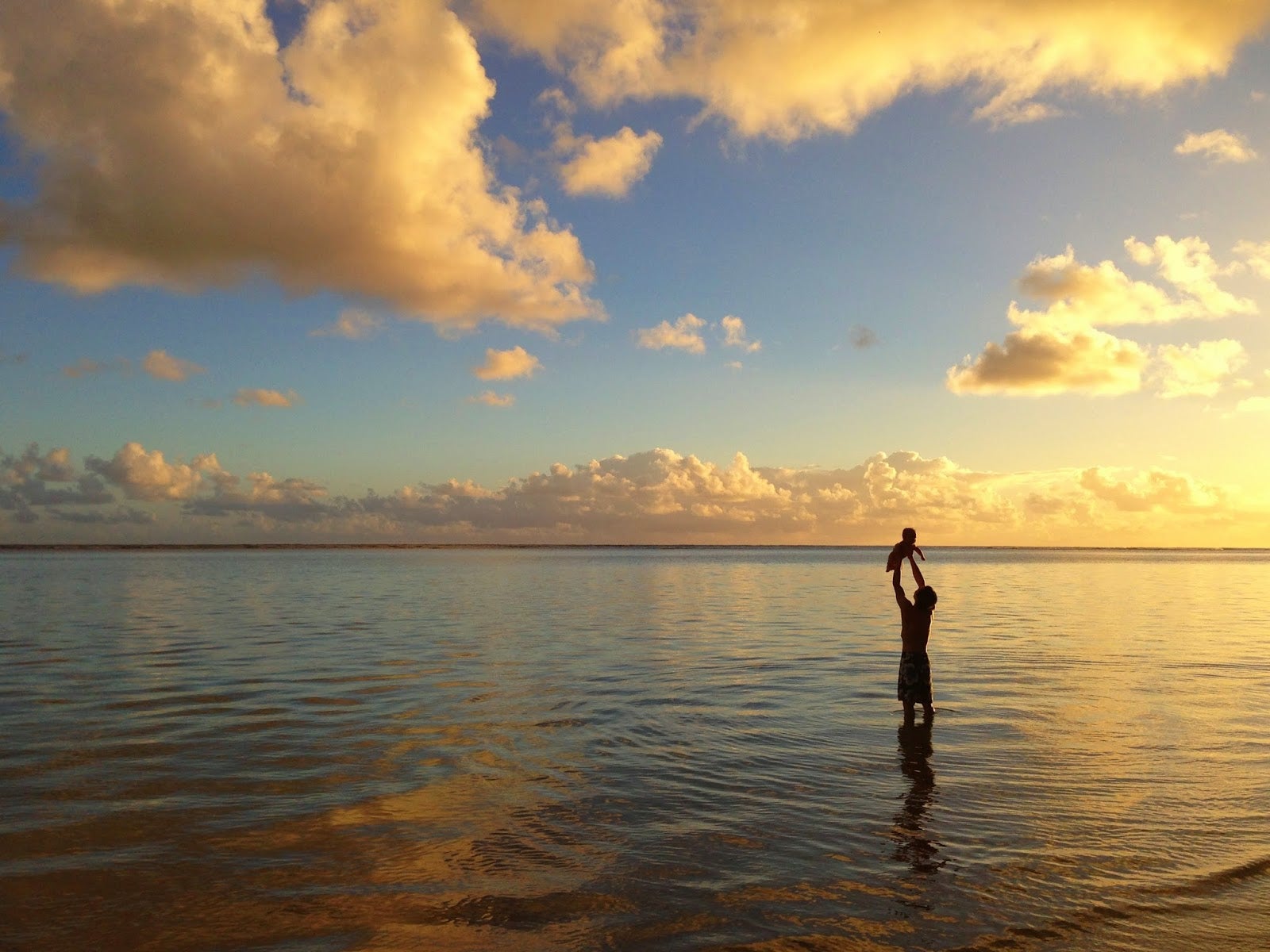 Being on a Hawaii beach vacation is one thing. There’s no climbing, no beta, no topos, no checking weather reports, no alpine starts. No agenda at all. Just relax. But all that relaxing is actually what gives you the energy to go back home and return to those things in your life that provide you with a greater sense of meaning and purpose. For me, that has always been climbing.

With a few weeks left in Randy’s paternity leave, we decided to head up to Squamish. I was unsure about whether or not I’d be able to actually climb. I was trying to not set myself up for failure by creating any expectations. But I’d be lying if I said that I wasn’t hoping to finally climb after so many months away.

We loaded our gear, our dog, Bodie, and Theo into the car and began the long overland journey to Squamish. Our first stop was Bend, Oregon. That first day, Theo was a trooper, and barely squeaked up at all! We stopped up in Bend so I could do some work with Metolius, one of my longtime sponsors. It was great to see the crew, who I really consider to be family. Likewise, all the folks at Metolius were super excited to finally meet Theo. And honestly, it was great to actually do a bit of work, to exercise my brain and body in a different way than the past four months.

From Bend, we planned to take two days to reach Squamish, planning for a short visit with Outdoor Research, in Seattle. These next two days of driving, however, were not nearly as easy as our first day. Theo went nuts. We could barely drive for 20 minutes without having to stop to get him out of the car and walk him. It was rough. I can’t say I blame him, though. Those car seats look like torture. I know that if I were strapped into a chair like that and made to sit still for an 18-hour road trip, I’d probably go crazy, too. We finally arrived at our friend’s house, haggard, tired and nerves fried, at 12:30 a.m.

Once in Squamish, though, we all settled down and got into a pleasant groove. It was nice to not have to sit in the car for hours on end. Theo loved being in that dense forest. And I was able to hike around without too much pain. 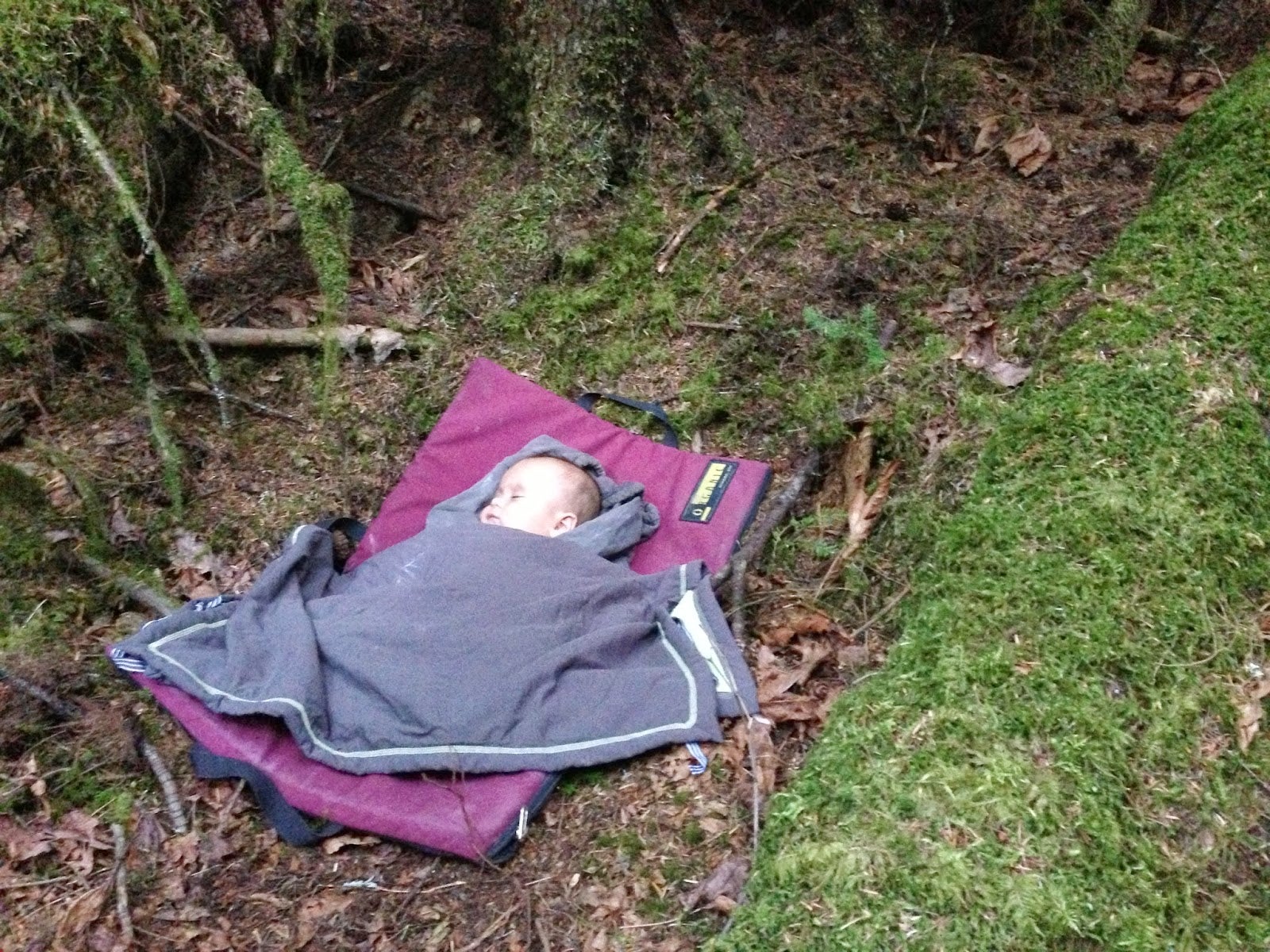 Then came the moment of truth. About four days into our trip, I did something I hadn’t done in over 9 months: I strapped on a pair of climbing shoes. My first thought was, “Holy crap, my feet hurt!” Even though I was wearing my big trad-climbing shoes, that sensation of shoving your feet into a pair of climbing shoes was still a shock. I felt strangely nervous, as if I were about to open a door to see what scary truth lay behind it.

Randy hung back with our little man as I wandered through an enchanted boreal forest stocked with erratic granite boulders, some as big as houses. I was looking for the easiest climbs possible. V0s weren’t easy enough. I wanted the down climbs. When I pulled onto my first rock climb in over nine months, it felt weird to put my arms above my head. My shoulders popped. My hips popped. Clearly my joints were still very loose from all the hormones going through my body.

There was a part of me that felt guilty about pulling onto the stone. I had reached a point where I had only been thinking about taking care of Theo first—me second. I hadn’t been missing climbing because I honestly hadn’t even been thinking about it. To return to this sport—something that I know I need to be happy—left me with some very mixed feelings. Part me only wanted to continue sacrificing myself for Theo. But the bigger part of me knows that to do that, to always put myself second, would lead me down a path in which I’d hit a dead end, and have nothing left to give. And that’s not healthy for either of us.

I only climbed a few easy boulders that day. I didn’t push it to exhaustion. I just moved and tried to be open to all the thoughts and emotions and sensations coursing through my body. A few days later, I went out bouldering again. And I did a little more. It wasn’t much, but I was out trying again. And I had to admit to myself that that felt great. It was a big learning experience going on these initial travels. What to bring, how to balance climbing with parental duties, how not to make a scene at the crag, etc.

But one of the most important things I learned about travel was recognizing when it’s “worth it”—and when it’s not. For example, toward the end of our trip, I found a $120 flight from Squamish back home. Deciding between that and another 18-hour car ride, in which we’d be stopping every 20 minutes, the decision was a no brainer. Randy was in full support, and after a short 2-hour flight we were home.