Brotherhood, Searching And Loss In The Chinese Karakoram 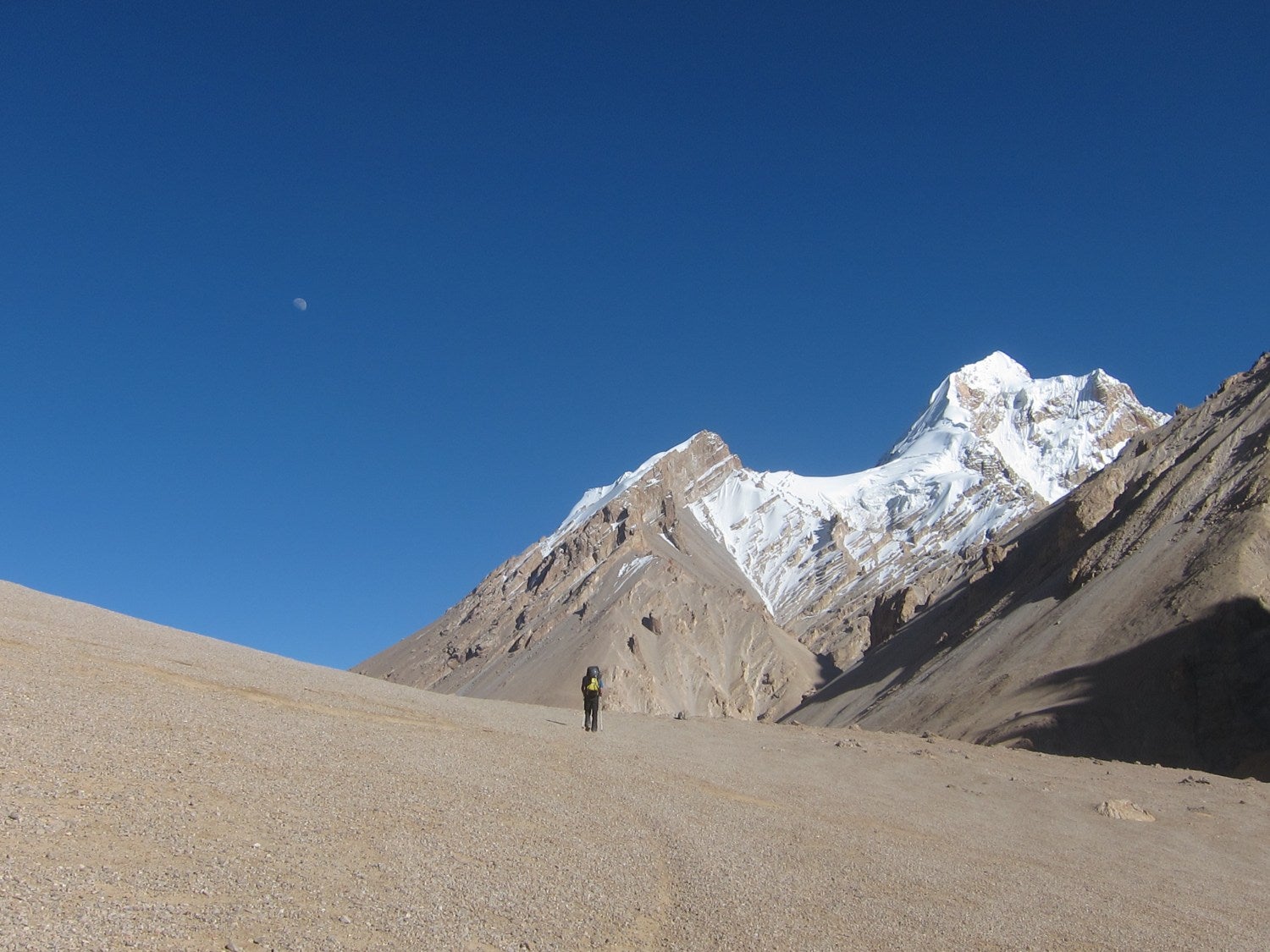 In his book Service: A Navy SEAL at War, Marcus Luttrell writes of veterans, “They gave their all—and got something back that no one else can claim: collectively, they form a single thread woven into the fabric of this country’s history, part of something larger than themselves.” That is to say, they served a higher cause than themselves. While I share a same sense of pride in having served my country in a time of war, Marcus later describes another, more powerful, reason behind this service: “We’ve bled together, sweated together, and shed tears together.” There is a bond forged in challenging conditions, and above all, that is what we seek. Whether in the mountains or on the battlefield, people like us seek a Brotherhood.

An idea sprung out of a photo posted on the Internet by a team of Russian trekkers. There was a beautiful face that had only been seen once by them and never attempted, the north face of over 6,800-meter Durbin Kangri I. Bruce Normand, an accomplished alpinist, assembled an international team that would travel to the region, with the shared goal of exploring this barren and seldom traveled region of the Chinese Karakoram. Bruce, my friend Rob Duncan and I would be climbing together and had a vision of the first ascent of Durbin Kangri I. We met in Kashgar, the most landlocked city in the world, to commence the journey. After a few days in a Jeep, we made final preparations and loaded the camels to launch on a four-day approach. 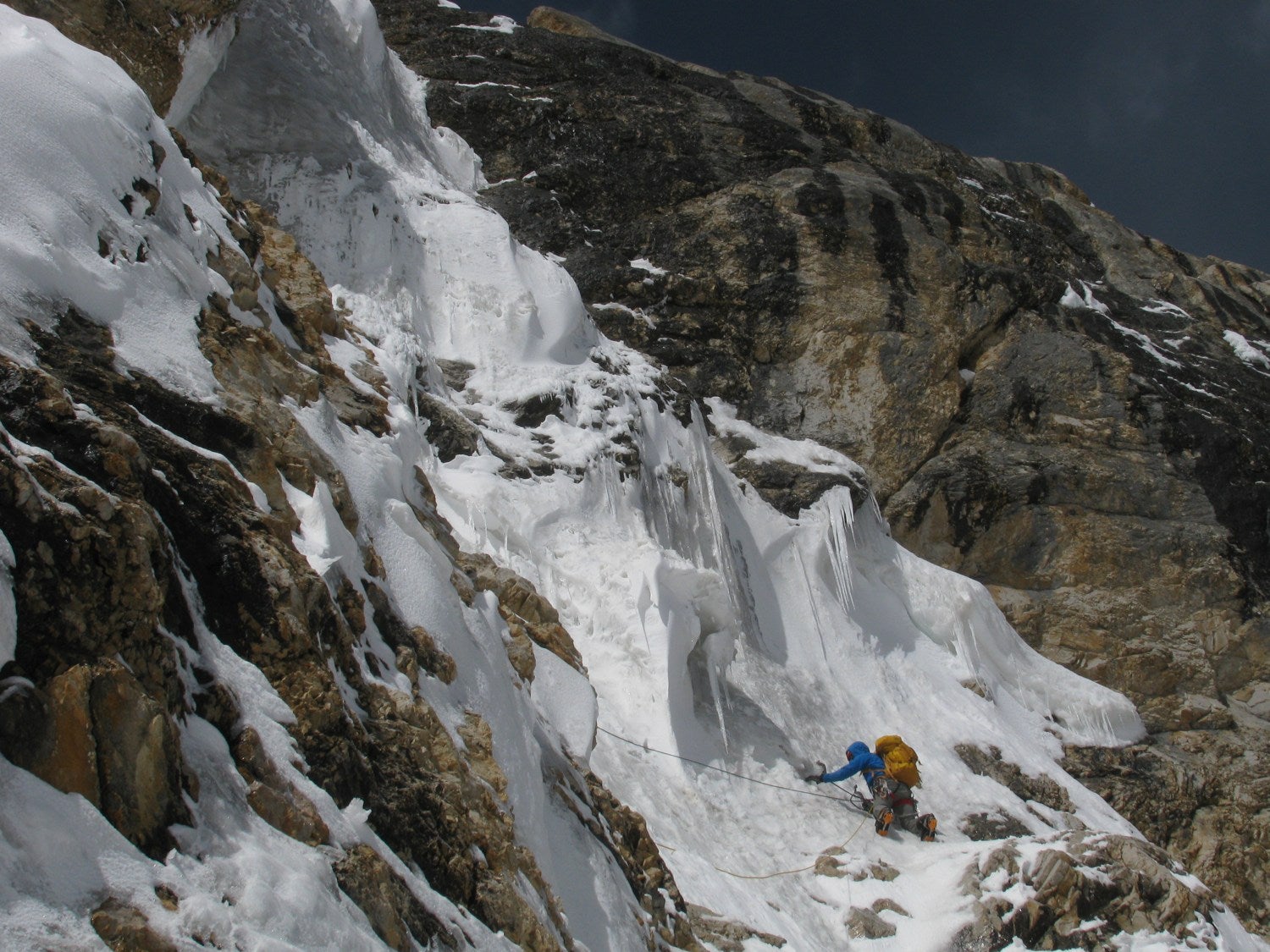 It was a scenic trip into the Shaksgam river basin. To our right we looked into Pakistan, further down the river valley we could see into India, and the Aghil mountains of China rose to our left. The excitement was palpable and the our senses were overwhelmed with the smell of alpine flowers, glacial rivers, and the overwhelming stench that came from the camels carrying all of our gear.

After establishing basecamp, each team began their acclimatization and exploration. Our team made our way six hours up a narrow valley to the glacier that sits below Durbin Kangri I. We acclimatized, summiting a new peak just over 6,100 meters and slept two nights at a 5,300-meter pass. Feeling strong and confident in our fitness, we planned to climb Durbin Kangri I in the next weather window. When it arrived, we woke early and made the two-hour hike to the base. 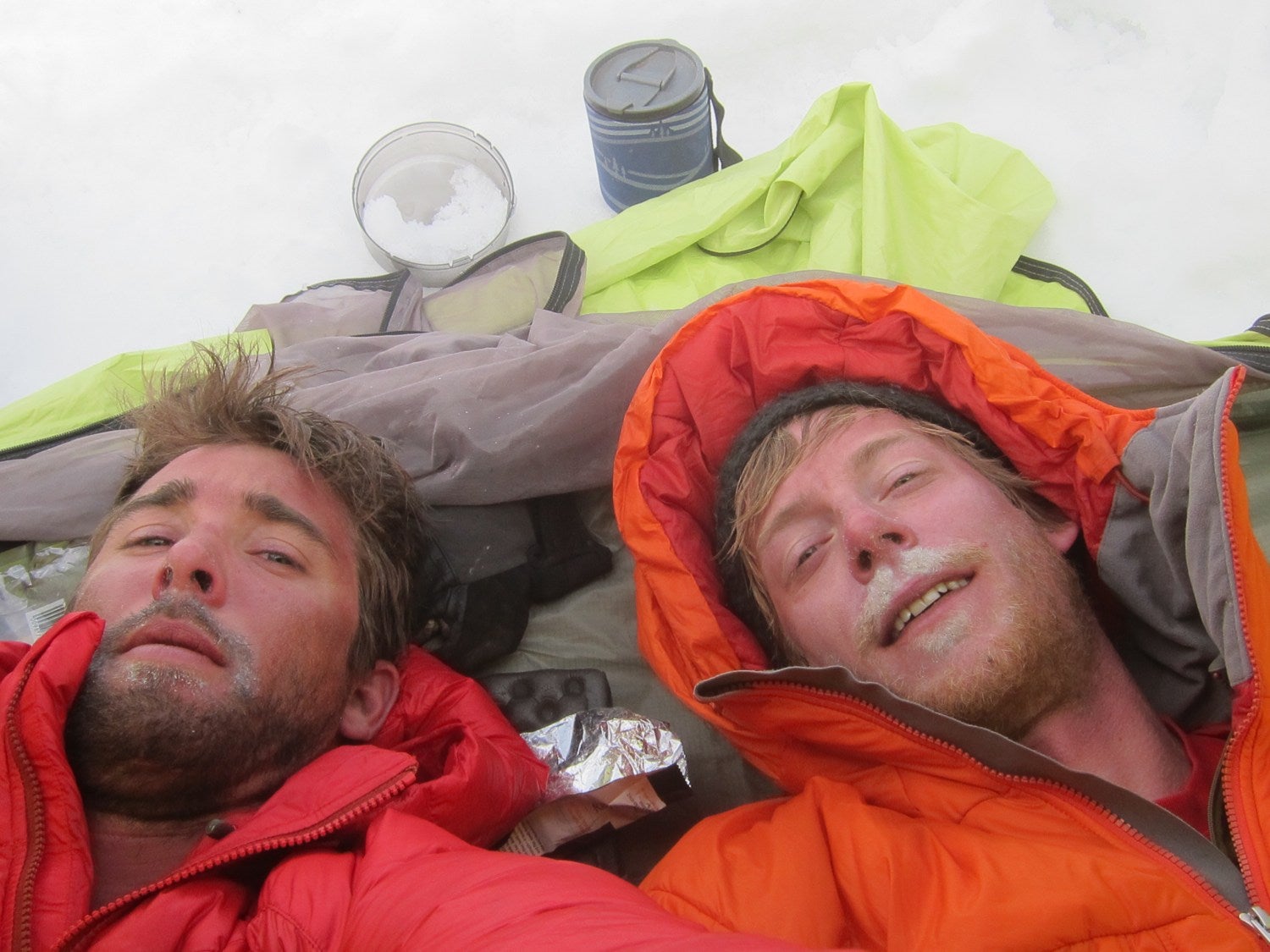 We quickly put 500 feet of vertical snow behind us. With excitement and awareness of nearly 2000 meters of unknown above us, Rob set out on the first technical pitch of the climb. He was shut down quickly by sublimated ice and horrendous rock quality. I came up to meet him and assessed the situation. I traversed hard right from his location and tried a different line of ice. I met similar conditions and after getting a little puckered, I found a thin section of ice that I could build a V-thread and lower from. After a short discussion, we all down-climbed the progress we had made and went back to advanced basecamp to reassess.  We decided to return to base camp and come back with more supplies to try a different, safer line.

We returned to basecamp to find everyone back after exploring their different objectives. Peter and Ales, an incredibly stoked and fun-loving pair of best friends from Slovenia, were going to go back up a different drainage to attempt our sister mountain, Durbin Kangri II. They left in a rain shower the next morning; with us and the other teams waiting for improved weather. 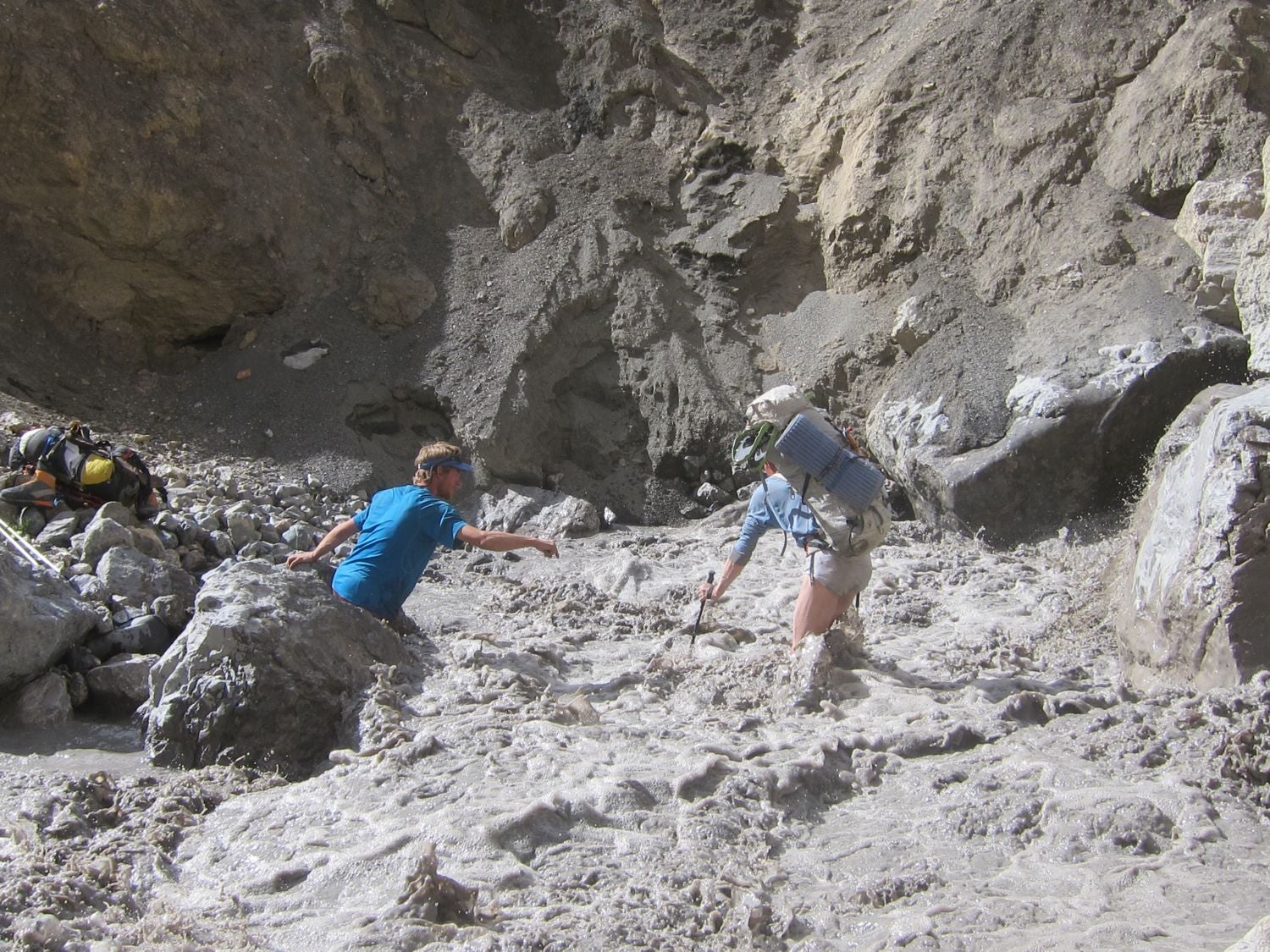 A day later, we set off again for our advanced basecamp. Upon arrival we racked and packed for another attempt on Durbin Kangri I the next morning. The alarm was buzzing at 3 a.m., but with a foot of fresh snow on our tent, we decided to wait and watch the conditions.  Later that morning, over coffee, we watched an avalanche rip down our intended line and cover a kilometer-wide glacier in seconds. Knowing that we would have been killed instantly had we made a different choice, we deemed the route unsafe and set off to explore a nearby river valley called the Zug Shaksgam.

For seven days we wandered around this savage landscape with views of beautiful, unclimbed mountains, but each was guarded by narrow and complex slot canyons with fierce levels of glacial melt raging down them. Numerous times, we waded these slots in our underwear, fighting the strong torrents and battling the frigid water. We never succeeded in reaching any mountains and were fully defeated by the search. Getting low on food, we decided to go all the way back to basecamp.

We found basecamp to be a ghost town. As planned, half of the teams had returned home early due to work obligations leaving only us and the Slovenians in the Shaksgam Valley. We thought it strange that the Slovenians had not returned, but did not give it much thought until after a phone call back home. Bruce’s wife told us that the Slovenians had not been heard from in over 12 days. We were immediately worried and began trying to use our sat phone to reach them. Nothing. We set out the next morning to try and reach their advanced basecamp. After 12 hours of hiking, we could no longer push up the glacial torrent that was coming down the slot canyon leading toward our friends. We went back to base camp—defeated, but not without hope. 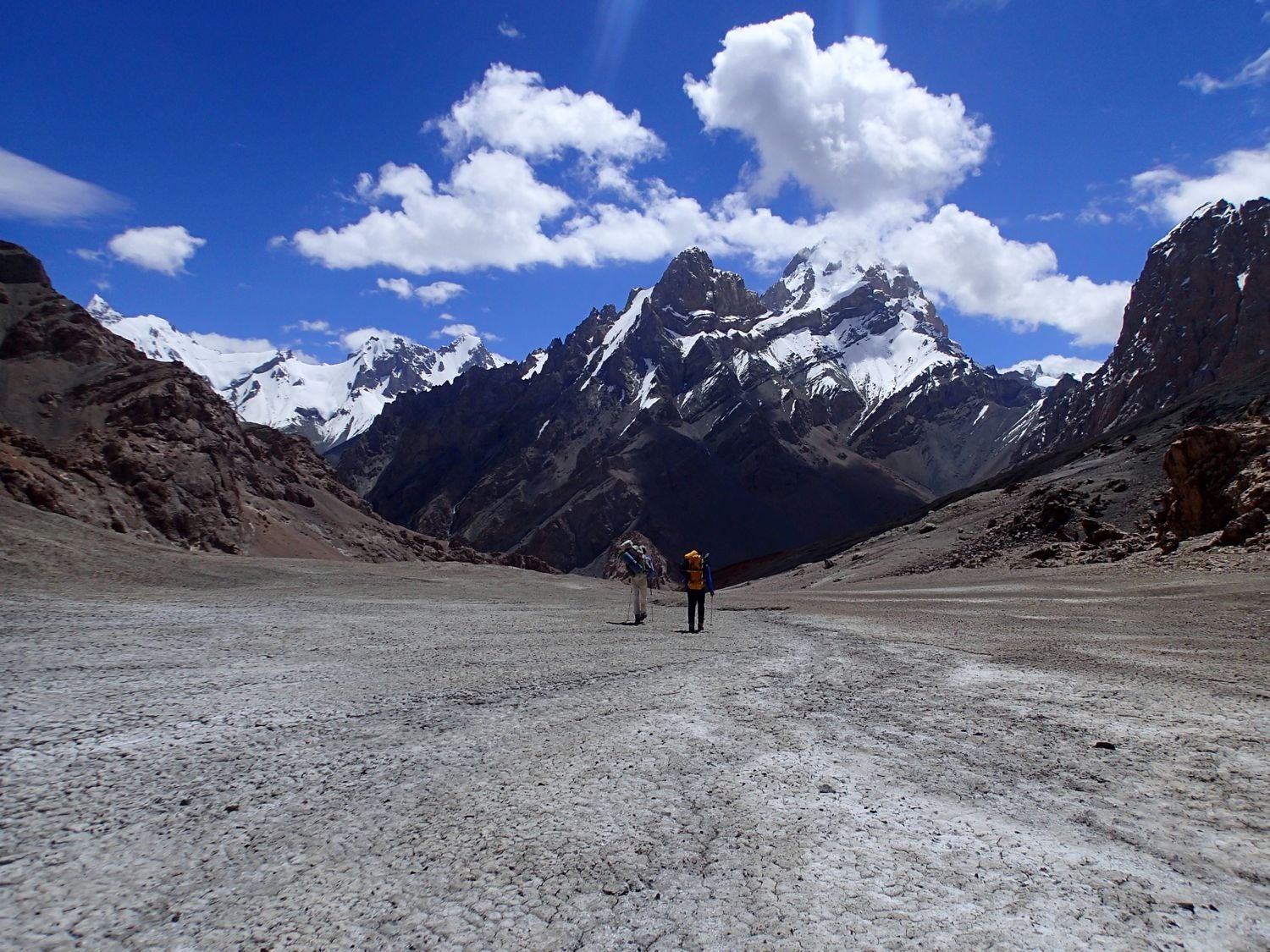 We determined that we would ascend the valley that led to our advanced basecamp and climb over a mountain pass to reach their location. After only four hours, we realized that the glacial melt was too high and we could not safely continue on. The weather was unusually warm and the rivers had risen considerably. We again descended to basecamp.

Tensions were high and now we feared the worst. We informed our emergency contacts and a plan was set in motion. But the game of phone tag had begun—us, the Slovenian Embassy, the Chinese Foreign Affairs Office, the American Embassy, our tour agency, friends and family. We could not make heads or tails of the situation. We could only relay that we needed a helicopter to reach our friends. After many long days of sat phone conversations, a helicopter arrived. I climbed onboard and spearheaded the search effort; nonetheless, we could not get high enough nor close enough with the type of chopper they had sent. At that point, we hadn’t had contact with Peter or Ales for nearly 20 days, and they would have been without food for more than 13 days. We had to make the difficult decision to conclude the search and begin the long walk out of the mountains with doubt, a sense of guilt and no closure.

We had to make the decision to conclude the search and essentially declare our friends dead. It was my first time dealing with death so intimitely. So after a long journey back to the US, I gave one of my closest friends a call to vent and to get some perspective. My friend is a Navy SEAL and no doubt has seen much worse, so I needed to understand what to feel from someone with far more experience. 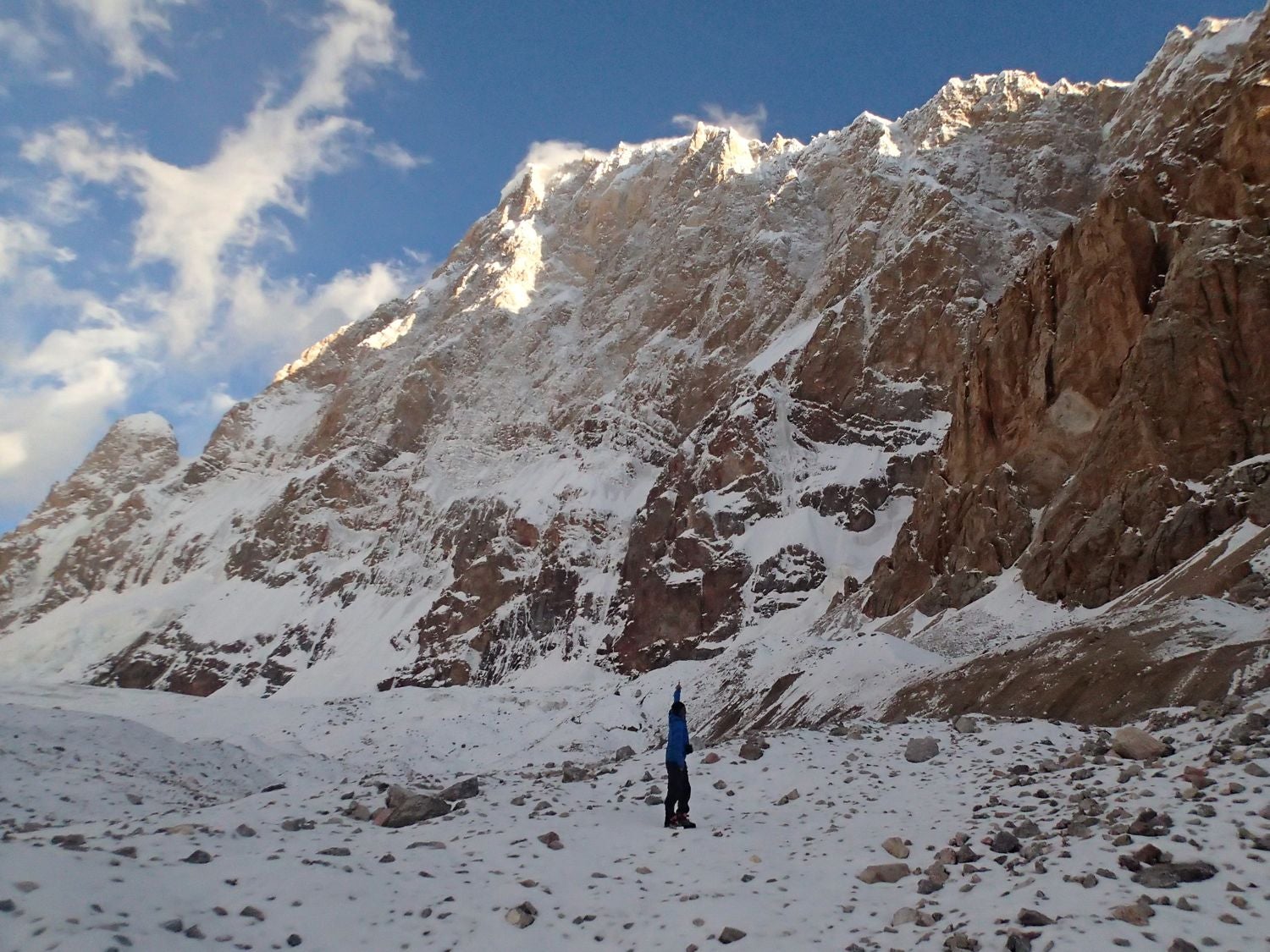 I explained all that had happened, and that I didn’t really know what to feel. He explained that everything would improve with time, but the unknown variables wouldn’t soon pass—the “what ifs,” the yearning to understand and the constant wonder of whether our friends had suffered. In the SEAL teams they never leave anyone behind, and ultimately that is exactly what we did. This has become one of the most difficult things for me to deal with. We had to leave Ales and Peter in the mountains. We failed to bring our brothers home. It hurts, but most of all it hurts to know that we have no closure to offer their families.

Alpinism is a dangerous and, some would say, selfish game. However, at least to me, it is a pursuit of something greater than myself—it is the pursuit of a brotherhood, bonds of trust forged by difficult situations of high consequence. Yet the most powerful insight I gained, amidst all of the tragedy this summer, was to make the most of the relationships I have; to tell those closest to me that I care and have no dishonesty in those words—to undeniably mean it. 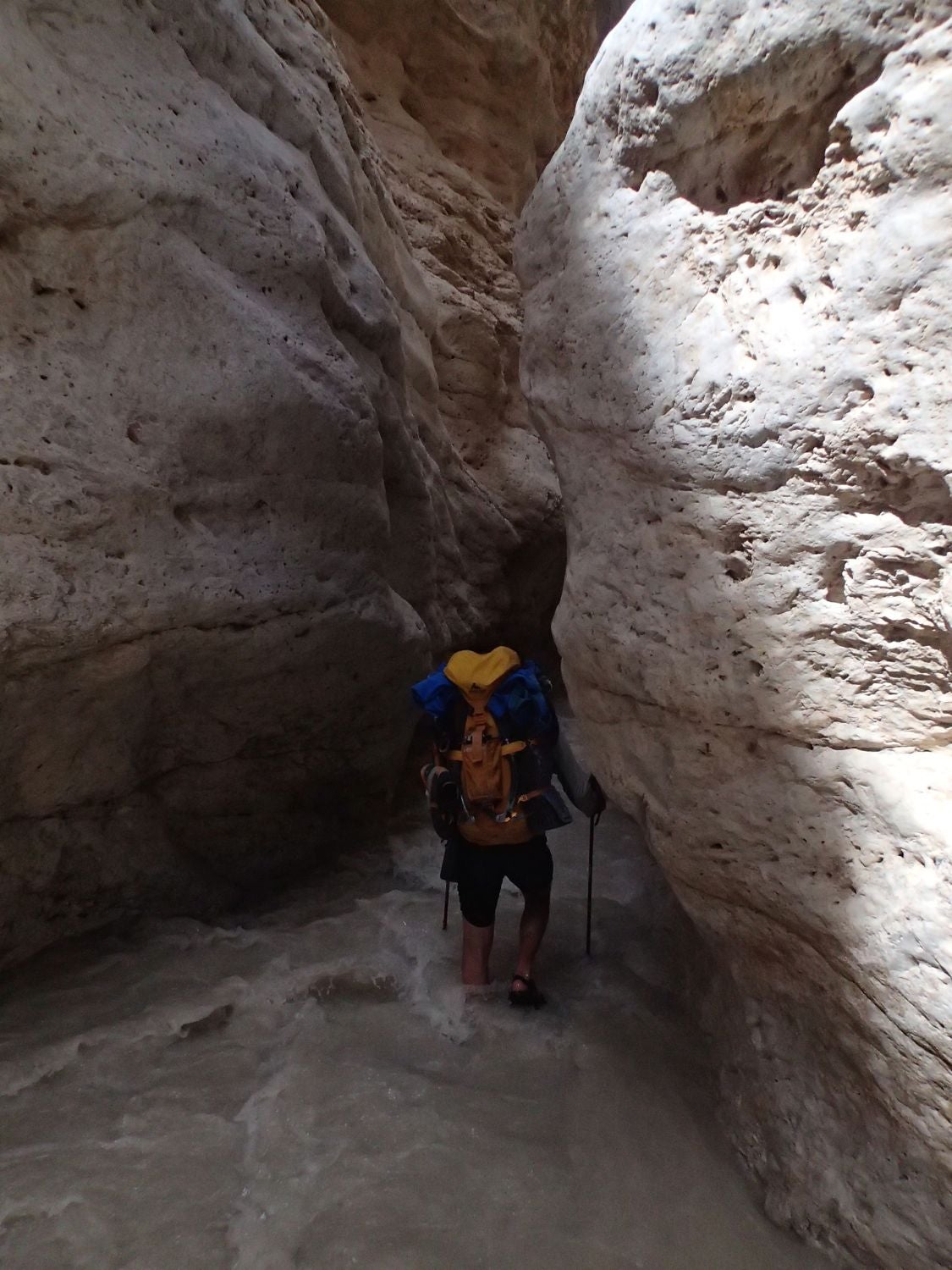 Another friend and brother of mine closed his article in Alpinist 42 with: “What matters most are the brothers and the sisters you choose to walk with—and to laugh with—through the fire.” I never fully understood this passage until I walked through the fire with two of my brothers. I learned that it does not require travel to the Greater Ranges, the wind swept peaks of Patagonia or the heavily glaciated regions of Alaska to experience a deep bond of trust—a brotherhood. You only need to get out there and get after it, build and foster trust with your closest friends. Most of all, never forget to tell those select few that you love them. Be certain that they know, because one day you may not make it home to tell them.