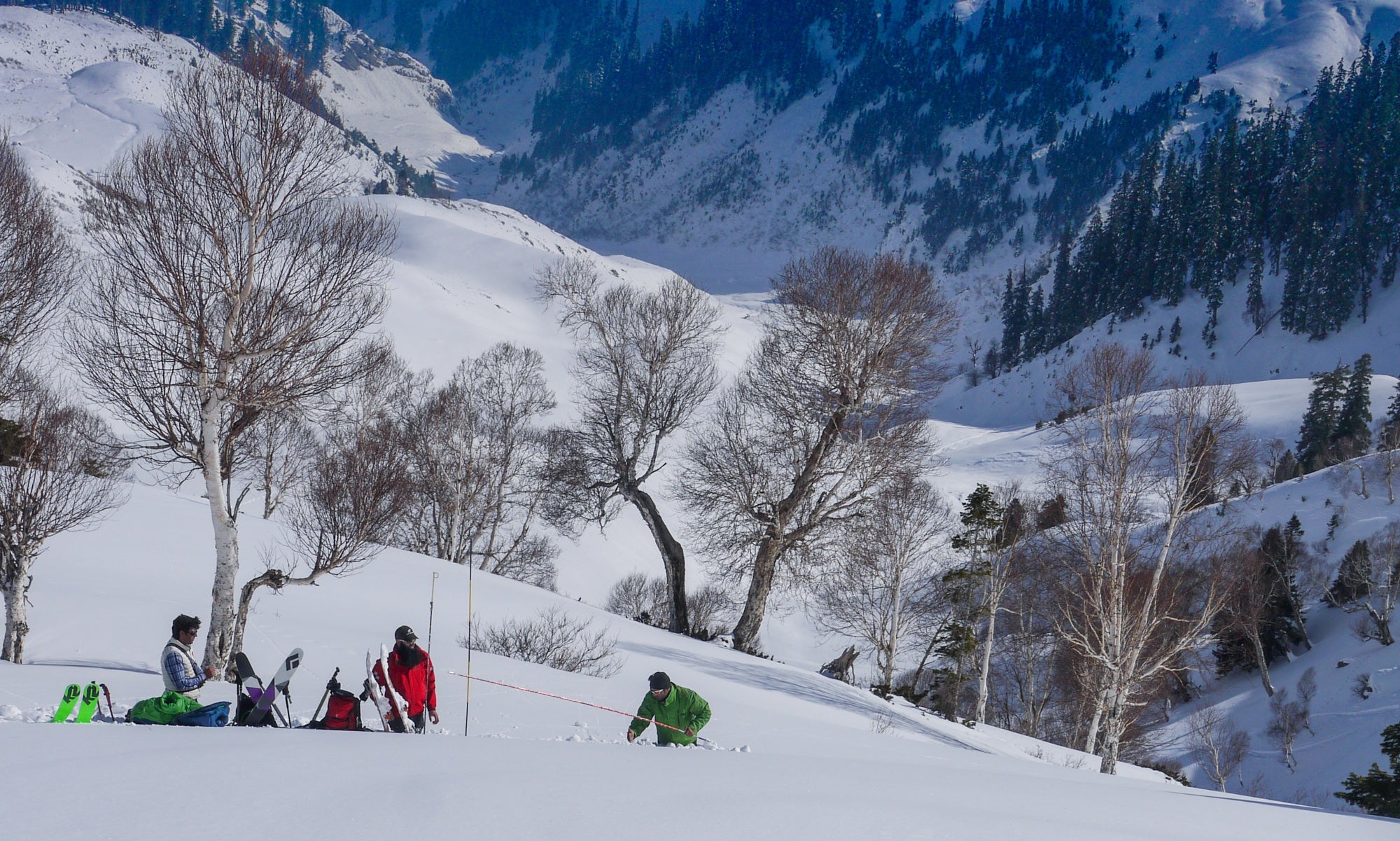 At the top of the ridge I find a place to pull my skins. The pine forest reminds me of the Northwest’s sub-alpine—except strangely unique because of the Himalayan environment. Grey snow monkeys watch me intently as I transition from touring up to skiing down. Both the grey congress of monkeys and I are uncertain of intent. I keep a keen eye on my voyeur. Here, I’m the strange element. I respect their curiosity. The waling drone of the call to prayer rings out across the cold air from the mosque’s electronic megaphone. The continental recycled powder and tall conifer fir trees comfort my lack of familiarity. Ceremoniously, I clack my poles together after clicking into my skis. Without reservation I surf cold snow back to the alpine village of Gulmarg, looking forward to Kashmir saffron kawa tea and warm garlic naan. That is … if God wills it. Inshalla.

Here, on a flank of the Himalayan Mountains in Kashmir India, a valley drifts far enough away from the disputed Indian-Pakistani boarder to focus its attention on one subject: powder skiing. In the heyday of British rule, the alpine meadow of Gulmarg—meaning “meadow of flowers”—sprung up as a mountain oasis for wealthy wanderlusters. Civil war interrupted, for a while. But when politics settled, influences of recreation from developed countries floated into entrepreneurial brains and the locals in the mountain villages. The huge, snowy mountains, ease of access and infrastructure was perfect for the developers—a sterling example of the “If we build it they will come,” mantra. In 1998 a newly built gondola began to bring winter tourism back to the area. In 2005 engineers pushed well into the alpine bowls of the 13,780-foot Mt. Afarwat, simultaneously creating the highest ski area and the second-highest lift in the world.

Today powder tourists from around the world visit Kashmir to access the Gulamarg’s cold smoke and the sinfully easy, vast backcountry skiing. Local ski guides have created a robust industry that knows the mountain better than God. A local Kashmir ski patrol, chaperoned by American-appointed staff, control the snow pack from main avalanche hazards on the slopes of Mt. Aferwat with explosives. They also monitor the visitors for required avalanche equipment and provide the Gulmarg Avalanche Advisory. The scene here would be impossible in the United States. It’s like Silverton Mountain Colorado except 50 percent bigger and 1,000 feet higher. The acute difference: rope lines and gates are open. 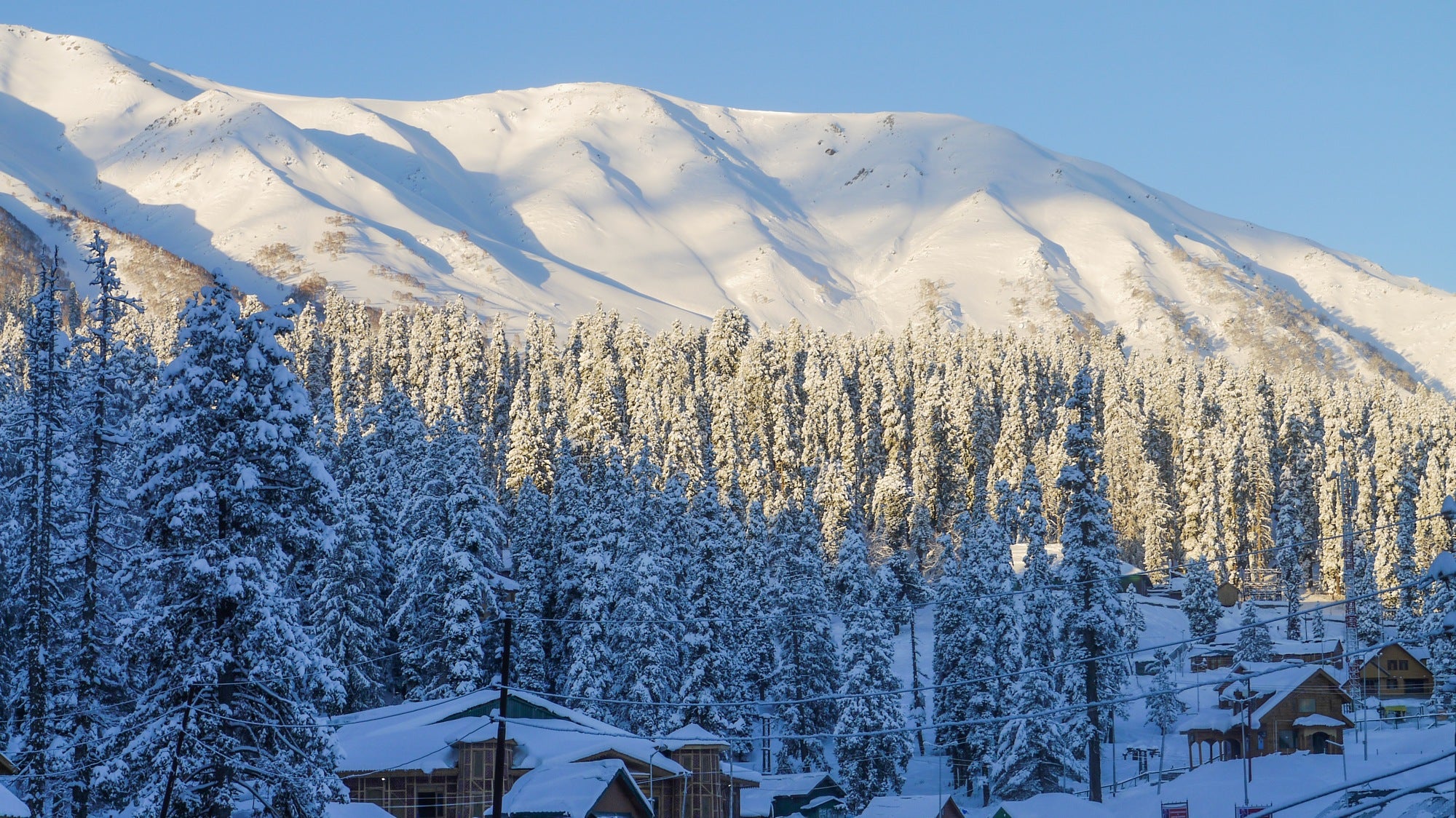 Luke Smithwick, the American resident snow safety officer for the Gulmarg Ski Patrol, noticed the burning desire from local snow professionals for further avalanche education. Many had been guiding for a decade, having received unaffiliated trainings by western IFMGA and non-associated guides, with unbacked certificates with no structure for further progress. Members of the Ski Patrol approached the American Institute of Avalanche Research and Education, but the project managers lacked connections and necessary communities to push it through. Luke had the network fill that void.

As a member of the American Guiding Mountain Association, he approached the Jammu & Kashmir Department of Tourism and proposed a plan to standardize the education. Affiliating with AIARE, Luke hoped to create a long term pro-track for the locals via an internationally recognized program. He also and liked the vision of this community progressing autonomously and credentialing themselves via a Kashmir-based avalanche school. Luke’s hope was that the school will naturally evolve as several pros progress through the program.

I hung up the phone with Luke after accepting the position—it was a surreal moment of purpose. Nothing alone prepared me for such a contract. The culmination of my career is what allowed this to be a well suited task. I would be pulling from my experience as Crystal Mountain Ski Patroller, mitigating snow with explosives and ski cuts, the standards of an IFMGA/AMGA guide, seven consecutive seasons in Colorado’s avalanche-prone continental snowpack, assisting in the development of ski programs and AIARE hut-based avalanche courses on Colorado’s Red Mountain Pass and in Norway, and as a Mt. Baker local and Northwest ski guide. Many of my former students became ski patrollers and guides. My students in Gulmar Kashmir were an exceptionally contrasting Muslim culture with added challenges of language barriers. This was going to be interesting. 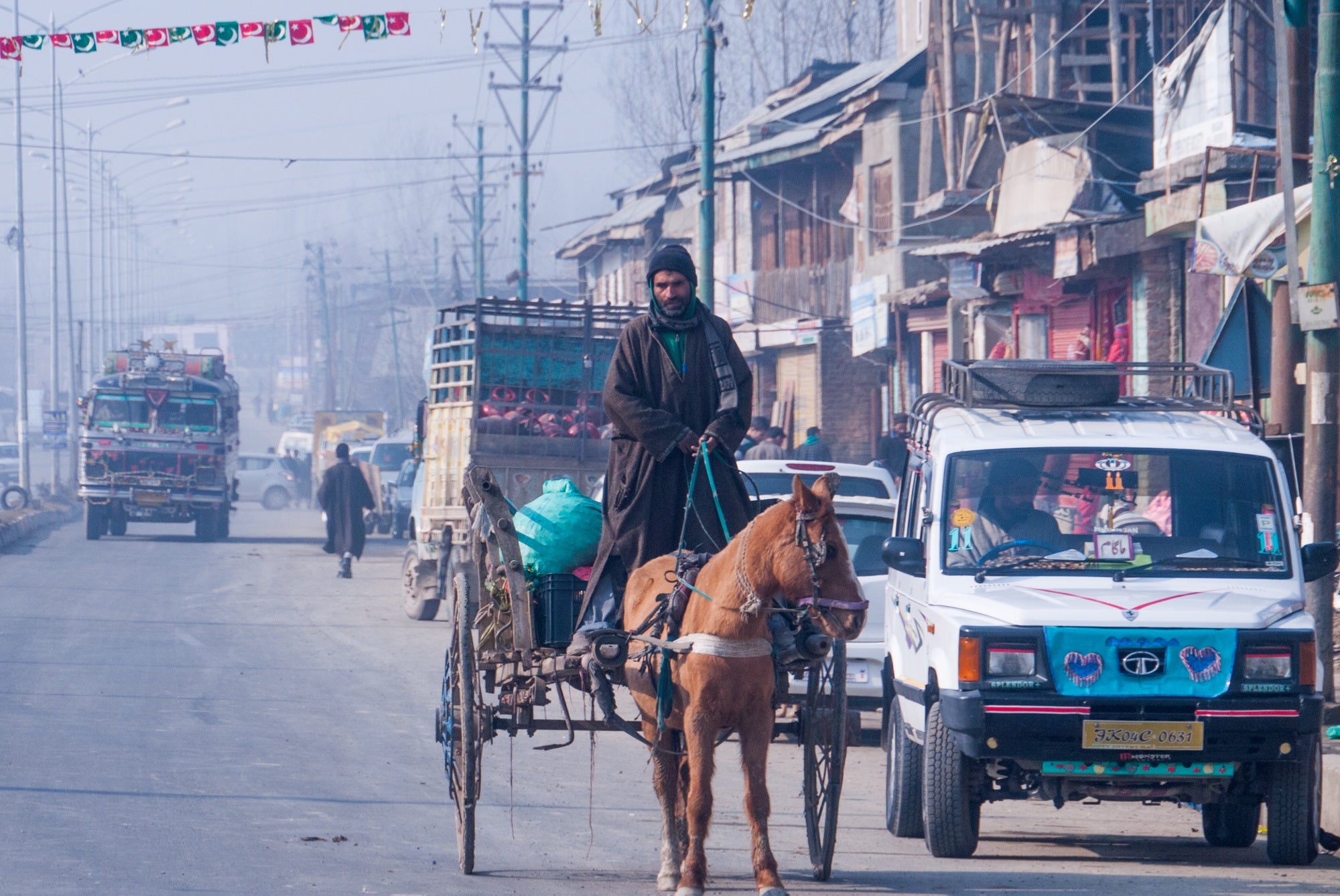 My taxi drove deeper into the mountains of the Himalaya, into the alpine meadow of Gulmarg. The call to prayers drone had a soothing chant this afternoon and the inversion fog mingling with the smell of incense gave a fantastical sensation. The students and professional community instantly embraced me as a welcomed guest. Never in my days as an avalanche instructor have I had such an attentive class. We worked through the power outages and the lack of fancy projectors to continue on with white boards, in textbooks, and through conversations while taking occasional translation breaks. They wanted to be safer. They wanted to be better prepared as professionals. It poured out in the student’s body language and interest. My job felt easier—not hindered. It felt like a big family. The students were all ski guides or Gulmarg patrollers who’ve known each other for years, in some cases since childhood. They embrace and bicker like it. Better, they conduct business like it. I was a side note to something much larger. A consultant to the new chapter they were writing, I was not the special one. This magical meadow of winter industry in Kashmir was the commodity, and I the observer. 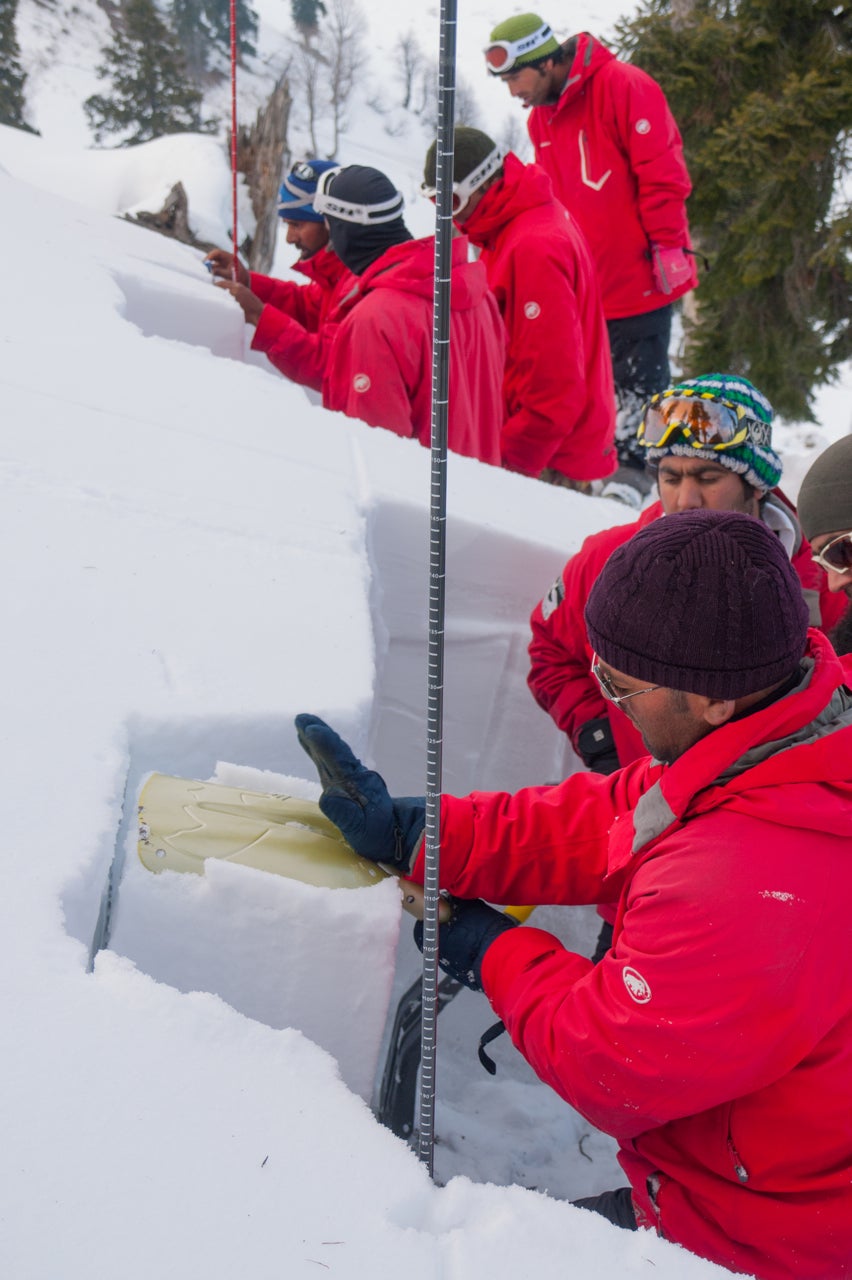 AIARE curriculum sponsored by the Certified Guides Coopertive (CGC) graduated 18 students in the Level 1 and Leve1 2 courses in January. In March we have doubled the capacity of the courses and the CGC will be sending Scott Schell, the Education Director of the Northwest Avalanche Center and Danny Uhlmann, a former Silverton Mountain Patroller and IFMGA guide. These two will educate 40 more students in the spring. One week after the initial wave of courses, we are already seeing new student observations come across the forecasters desk via the www.avanet.com web platform from the recent AIARE students. These guys are professionals—they’ve been making hundreds and even thousands of observations about the snowpack, now they have the tools to communicate what they were seeing. Once the feedback loop gains traction, inertia will take over. Then, this little community of skiers can join the world’s stage of operational professionals and show us how can we learn from them as a community. That is, if god wills it. Inshalla.

Special thanks to Jammu & Kashmir tourism for your support, Backcountry Access for the projects exposure, AIARE, the Certified Guides Cooperative for providing foundational requirements, and Luck Smithwick Snow Safety officer and owner of Himalayan Alpine guides, and of course my sponsors Outdoor Research, Black Crows Skis, and Julbo USA.