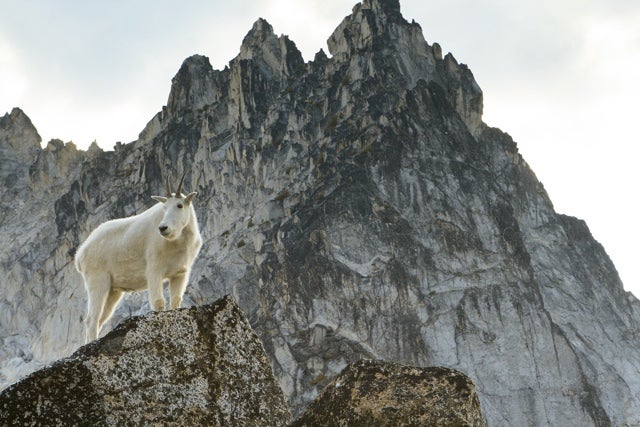 We asked Facebook, “Have wild animals ever invaded your campsite or stolen your stuff?” Here are seven of our favorite anecdotes from the victims of a wildlife crime.

During a winter ski tour at Mount Rainier, we had multiple foxes raid or attempt to raid our snow cave kitchen stash. One fox grabbed a bag of Flamin’ Hot Cheetos. After taking a few bites it started sneezing like mad. I guess he had never had anything spicy before. Didn't seem to faze him too much, as he polished off the entire bag. —Jeremy C.

I decided to do a quick solo of the Skillet Glacier on Mt. Moran in the Tetons. After the long hike in, I prepared camp at the base of the Skillet and got cozy. Marmots were scampering about looking for goodies. It was silent but for the Marmot barks. I realized that they sounded like short blasts on a whistle, so I had the bright idea to get out my rescue whistle and bark back at them. They loved it, thinking I was a big marmot. They came in close and as dusk turned to night, even tried to get into my sleeping bag. After enduring what seemed like hours of being trampled by marmots, I eventually got up, packed, and headed up the route. I reached the summit in the middle of night and it was one of the most spectacular things I have ever seen in my life. It was a perfectly clear night on the summit of Mt. Moran with billions of stars shining. I thank the marmots for that one. —John M.

Some critter stole my friend's WAG Bag while we were climbing in the Absorokas. I'd count that as a win. On the other hand, it also ate the grips off of his trekking poles. —Phillip D.

I was once double-teamed by a moose and bear! Hiking on Minnesota's Superior Hiking Trail, I saw a cow moose descending a ridge. So I backed up, took off my pack, grabbed my camera and headed back to see if I could get a picture. After a couple minutes, I heard something behind me and a bear was dragging my pack away! I imagined them planning on splitting the loot. Alas, all I had was a Powerbar and ramen. My pack was ultimately unharmed (other than lots of bear drool). —Zack J.

One stormy night in the North Cascades, a climbing partner and I bivied in a couloir. It turned out to be the prime bedding site for large bull elk. Clattering noises on rock in the night startled us awake to find an angry bull elk stomping and snorting just feet away from our bivy sacks. Apparently, he was upset we had taken the best spot. —Mike B.

Sometime in the middle of the night, our orange Squishy Bowl got up and wandered off. We found it next morning, 20 yards from camp with a big chomp out of the rim. No wonder they called it Deer Creek. On the California Coast later that year, guess what disappeared again? This time, we found the orange Squishy Bowl having been nibbled by a rodent. It must be very appetizing. —Verticulture Editors

I climbed the East Ridge of Ingalls Peak with my friend Jack this past August, and after topping out at 5 p.m. and descending past Ingalls Lake, we walked the trail headed back down toward Longs Pass. Just after we crossed a creek, I walked off to the side of the trail to find a rock to pee on, and started to go about my business. It was as if the sound of my zipper was a dinner bell. A narrow white face, curious, popped over a ridge 20 feet from my crotch. Then another one. Talk about stage fright, or performance anxiety. They approached confidently. They both stared at me, and I stared back at them, confused and anxious. It was awkward, several levels above the feeling you get when you’re standing at a line of urinals in the airport and you’re pretty sure the guy next to you is peeking over the partition and looking at your special parts. I zipped my pants back up and briskly walked away. —Verticulture Editors

The entire collection of anecdotes can be found here.