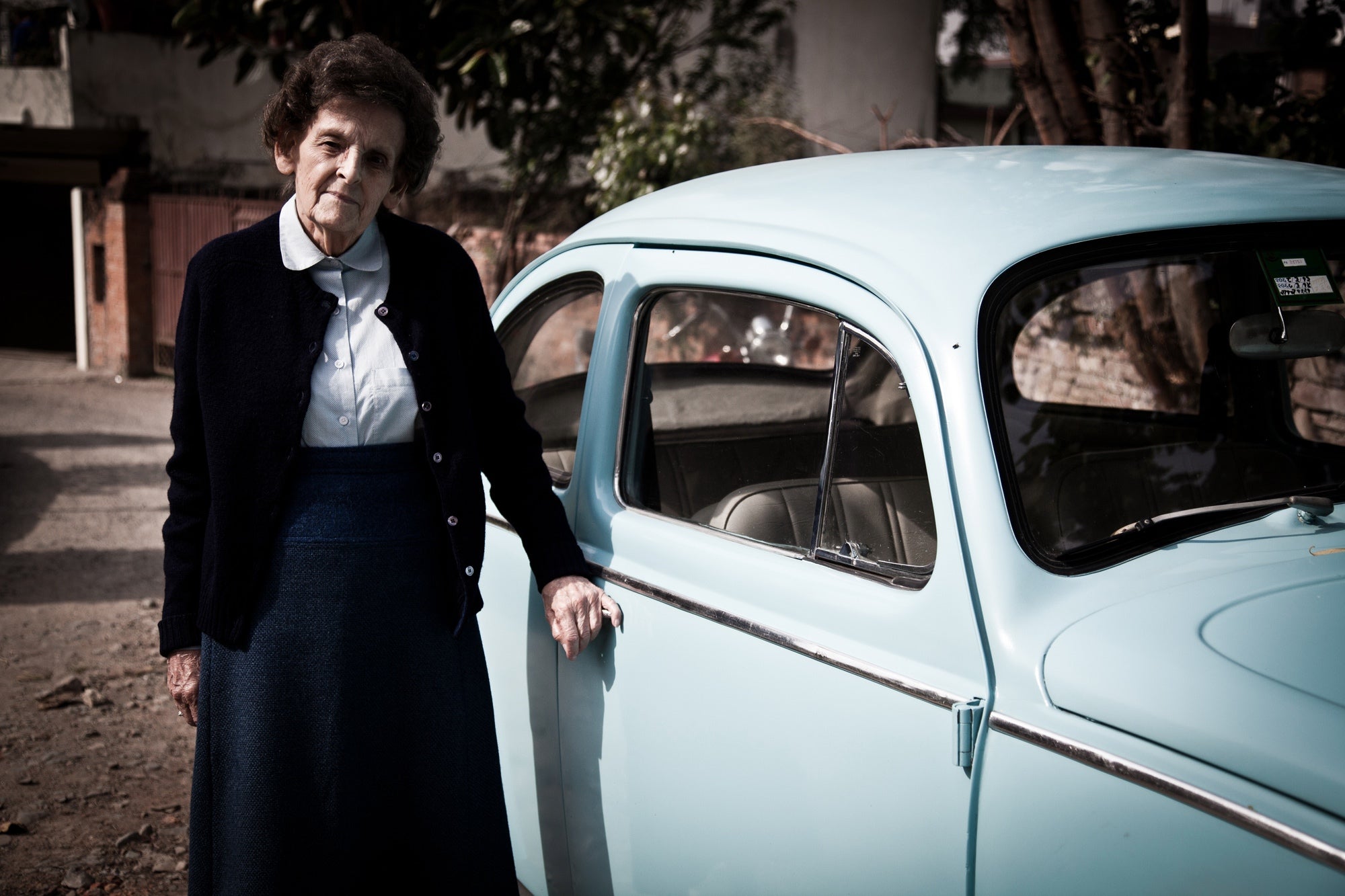 “Isn’t Miss Hawley coming?” a disappointed Hiro Takeuchi asked me when I was debriefing him about his expedition. The Japanese climber had just come back from a successful expedition to his 14th and final 8,000-meter peak and had become the first Japanese to complete this impressive feat. It was difficult to tell the 42-year-old mountaineer, who had known Miss Hawley for over 20 years and had been “examined” by her several times, that she was busy. She and her driver, Suban, were on their way to meet another expedition and, as usual, they were stuck in the mad Kathmandu traffic in her 50-year-old baby-blue Volkswagen Beetle.

Elizabeth Hawley, who lives in a modest flat in the Nepalese capital Kathmandu, has archived expeditions to so-called expedition peaks in Nepal for 50 years, and it’s difficult to escape her grilling interview technique. “It sometimes happens that we miss an expedition, but most of the time we find them—even if it is years later,” Hawley says. In order to keep up with the rising number of expeditions—this year there were more than 50 on Mount Everest alone—she has three assistants, who help her scan the streets of Kathmandu for mountaineers.

Most climbers deem it important to get into Miss Hawley’s records, as she’s considered the last instance for them to get recognition from the mountaineering world. Hawley, however, doesn’t quite see it this way. “I am not a judge. I am a historian and all I do is collect data. And that’s what I would like you to do,” she said to me when I started working for her in 2004. Even though the 89-year-old has never climbed a mountain herself, she is very tough with her questions and has made some mountaineers sweat and wrack their brains to remember the right dates. “Come on, get your act together. You must know when you slept the first night at Camp 1,” I once heard her bark at a climber at the Yak & Yeti Hotel in Kathmandu.

Hawley was born in Chicago. She studied politics, English and zoology. She never followed a career in any of these subjects, but became a journalist. Her first job was with Fortune magazine in New York, where she worked as a researcher. Not content to sit behind a desk day in and day out, she jumped when her employer gave her the chance to travel, enabling her to discover the world. However, wanting to spend more time in the countries she visited, the young journalist quickly got fed up with the short trips. In 1956, she quit her job and embarked on a journey around the world, which eventually took her to her future home, the Himalayan Kingdom of Nepal.

She arrived in Nepal during a time when the kingdom opened up towards the West, a movement that absolutely fascinated Elizabeth Hawley. In order to properly follow this process, she decided to immigrate to Nepal in 1960. At first, she worked as a correspondent for Time Magazine, and later moved to Reuters. In 1963, when the first US expedition to Mount Everest arrived in Nepal, the young journalist was commissioned to report about it. Hawley followed this expedition closely and found her work with the mountaineers so fascinating that she decided to interview the second expedition. And the third. And fourth. Her initial interest became her vocation, eventually developing into the worldwide reference for mountaineering.

Something she just “slipped into,” the job is something she speaks of as if she were still thinking of changing her career. “This job literally just happened to me, and I am not really progressing, which I have to change,” she says.

However, changing her career would be difficult now that she has become the Keeper of the Mountains. With more than 340 mountains on her list, she has interviewed countless expeditions for the past 50 years,  the collected data handwritten on paper, some of which has yellowed in her office’s huge drawers over the years. “I will have to stop at one point, as I am running out of space,” she observes, pulling out a file reeking of mothballs.

Despite never having worn a pair of crampons or used an ice axe, Hawley knows each mountain’s routes like the back of her hand. “I want to sleep in a bed, eat at a table and be driven around in my beetle,” she says, regarding her lack of enthusiasm to climb a mountain, and she does not understand why people like me are attracted to high peaks. “What, you are going climbing again?” she yelled at me when I told her about another expedition in spring. “I need you in Kathmandu and not on top of some stupid mountain.” Even though a certain interest in mountaineering is necessary, Miss Hawley doesn’t like her team to be away from Kathmandu. Preferably they should be available to her 24/7, as finding and interviewing the hundreds of people going to various expedition peaks has become a huge task each season. But despite turning 90 this year, Hawley still managed to see about 40 expeditions this spring.

With an ever-increasing number of punters wanting to climb Mount Everest and other 8,000-meter peaks, it’s very unlikely that Miss Hawley’s system of meeting all the teams personally and writing the information down on paper will be sustainable. Her data has already been available on a CD-ROM, known as The Himalayan Database since 2004, and getting the information electronically will probably be the future. However, as long as Miss Hawley is the boss, we will happily continue to do it her way. And even though getting the information electronically will mean a lot less work for the team in Kathmandu, we will certainly miss meeting up with the usual suspects every season.