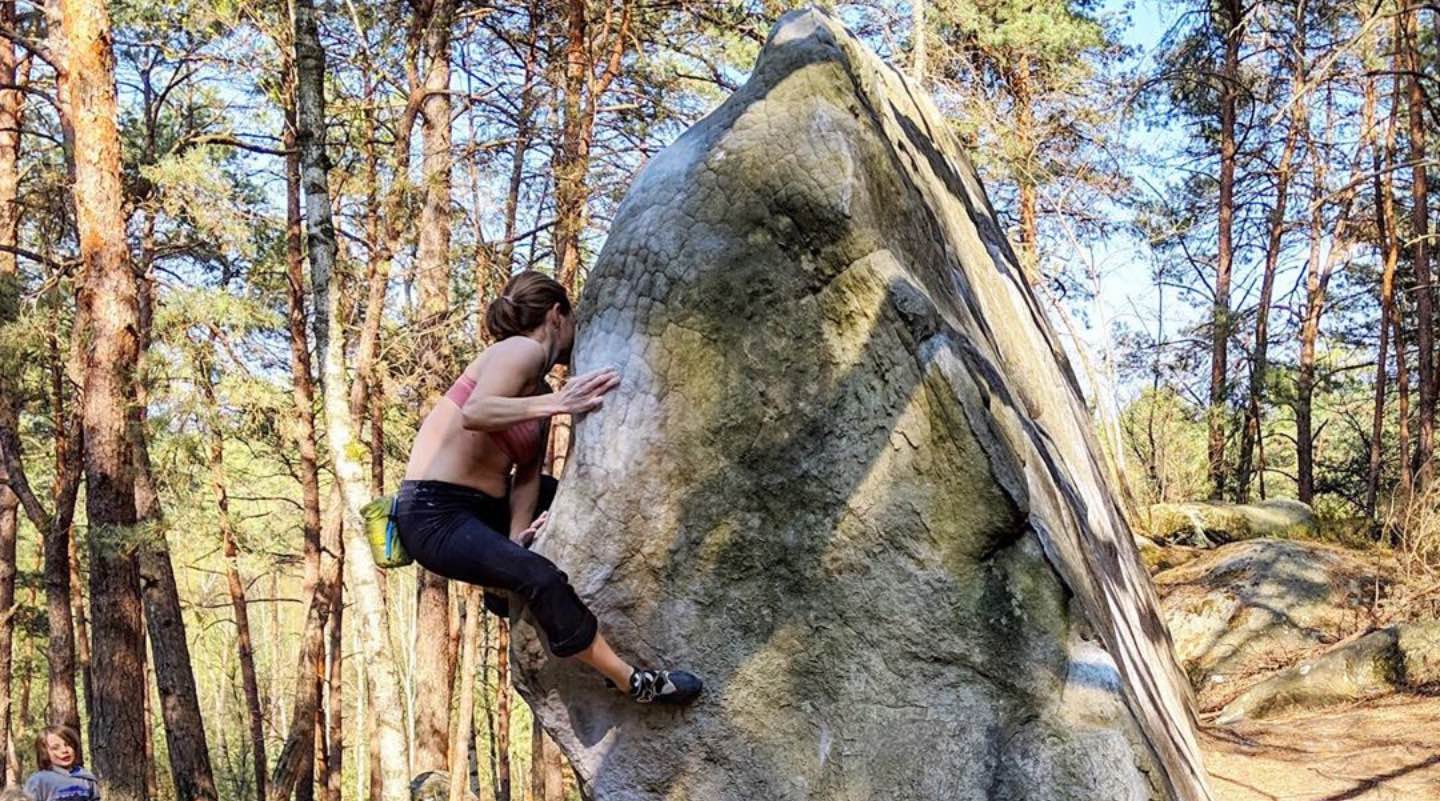 I first tried the boulder problem El Poussif in 2003, during the height of my climbing career. I was at my skinny "fighting weight" and expected to waltz up the Fontainebleau classic—a technical arête requiring strong fingers and core as well as understanding how to move your body in tricky ways. I threw myself at it over and over, but finally realized it was too hard for me. Dejected, I walked away, skipped dinner that night and did double my usual push-ups and pull ups as a sort of self-punishment.

Last spring, I went back to Fontainebleau and tried again—and succeeded. I was at least 15 pounds heavier. At a different point in my life, that part of the story alone would have made a huge impact: the fact that being thin isn't the only path to climbing hard. But now I realize that's actually not the most important lesson for me.

Maybe it took the physical act of climbing something I couldn't climb before for me to understand—but it's actually what happened underneath that’s the most important. It’s what’s underneath that led to those successes.

In the 15 years between those two tries, I established some of the hardest climbs in the world, some of which took over a decade to be repeated. I free climbed El Cap three times. And went through a very public marriage and divorce. After that my body broke down, and my climbing level cascaded from world-class to elementary. I went through a period where I didn't know if I should keep climbing at all if I couldn't climb at an elite level—it felt foreign and difficult to let go of that. But eventually I realized that climbing was woven into me, no matter what level I could climb.

With a more balanced mind, body and life, my husband and I started a family. And learning to climb and love my new postpartum body has been the greatest transformation of all. I realized this: It's not just about climbing hard.

But since climbing El Poussif, I've wondered how it would have changed things for me if I had heard this sort of story at different points in my life. What would I have done as a hungry, tiny teenage competition climber hearing that I could climb hard even if I was heavier?

What would I have done as an angsty, driven and achievement-focused 20-something knowing I could climb something that I once failed on and feel success without the external praise and accolades I sought? Or as a postpartum mom in my 30s, crying myself to sleep at night, knowing that with some self-love and compassion I could actually love this new saggier, softer, heavier body instead of constantly resenting it?

What would I have done seeing a picture of me smiling happily and proudly without a ripped firm belly? I know I've been influenced greatly by what my heroes have told me and what I've seen in magazines and on screens. Representation matters.

If I had seen heroes, peers, mentors who were all shapes and sizes, and talked openly about struggles they had, or traps they had gone into with eating, it would have made me think much more. Today, so much time is spent following peoples’ lives on screens. And for the most part, it seems that sharing one specific slice of life, one type of image, is what’s common. But what if we saw people climbing with soft bellies? What if we heard about the traps and detriments of eating disorders? What if we could support each other and ourselves through all of this? I think it would lead to a much healthier and robust community—and that is the most important thing we have.

Someday I might be able to say about El Poussif, simply: “I tried really hard and was happy to stand on top of this boulder." But until then, this means more than that.