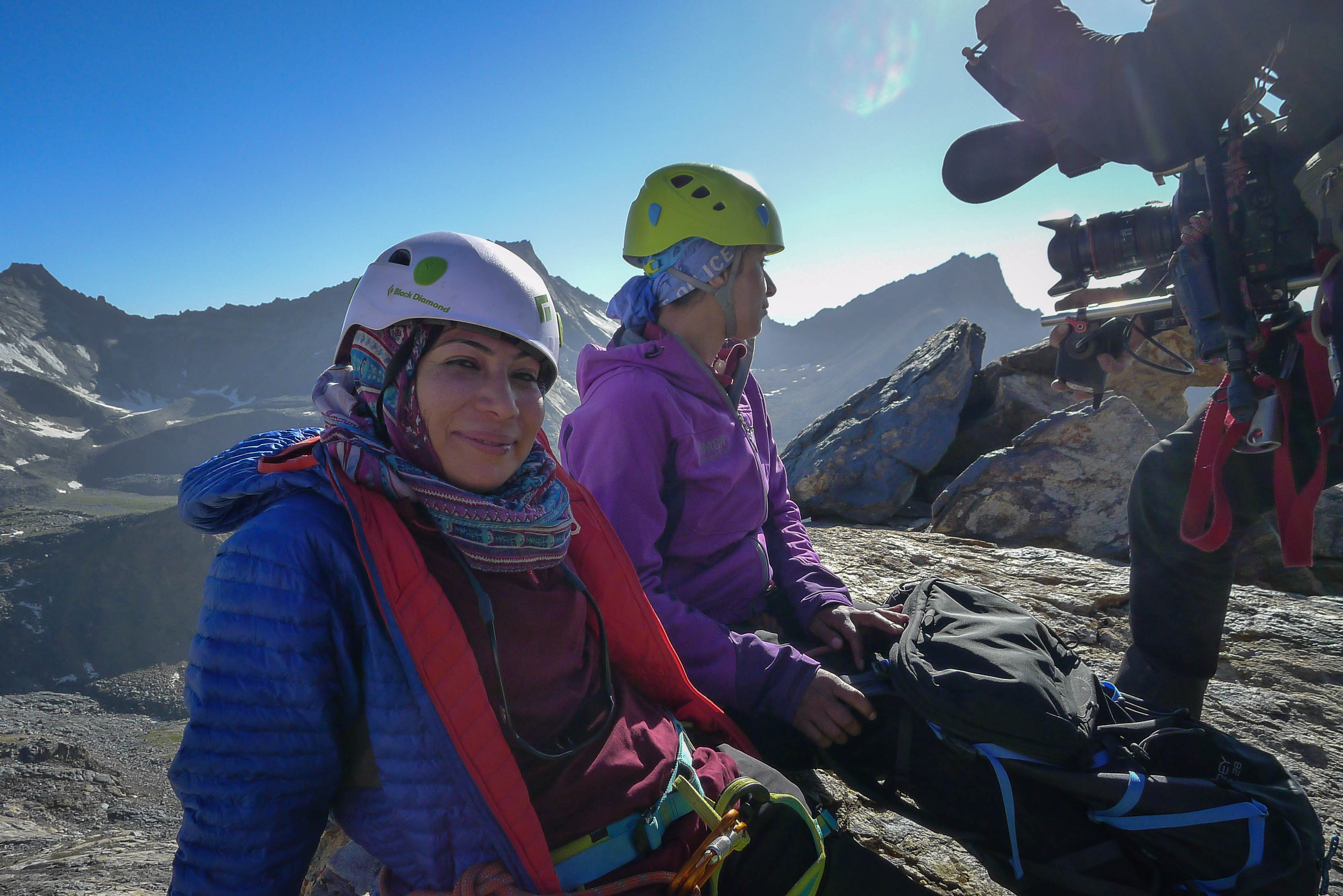 In Afghanistan, women don’t go mountain climbing. Nor do they usually drive cars, ride bicycles, or go anywhere without a head covering or Burqa. The idea of women climbing mountains is unheard of. It is unacceptable in the eyes of many and a risky endeavor for those who wish to break cultural and gender barriers through this already unconventional sport.

In August 2015, I traveled to Afghanistan’s Hindu Kush Mountains as a guide for the first-ever Afghan Women’s Mountaineering Expedition. Contracted by the American NGO Ascend Athletics, I saw this as an opportunity of a lifetime, one in which I could give something back to a group of people desperate for change after decades of war and oppression. Not to mention a chance to visit and climb in a country and mountain range of great intrigue.

The expedition was not without drama. But then again, most expeditions aren’t. Add to it a film crew from HBO/Vice Media, a security team and a bevy of personalities, and more than once I found myself wondering what I’d gotten into and if it was all worth it. In the end, and with some perspective gained from time and distance, I’m able to see that we did in fact achieve success, both in the mountains and in giving these young women a platform for change and independence. Below is my story in photos.

The team consisted of thirteen women, 16 to 22 years old, all living in Kabul and all training for a year in anticipation of the expedition. Most of their training is physical, but in a war zone you must also be trained to recognize and avoid IED’s (Improvised Explosive Devices), which are particularly common in mountainous terrain. Here, the international organization, Mine Action, teaches the girls the difference between antipersonnel and antitank mines. Welcome to Afghanistan! 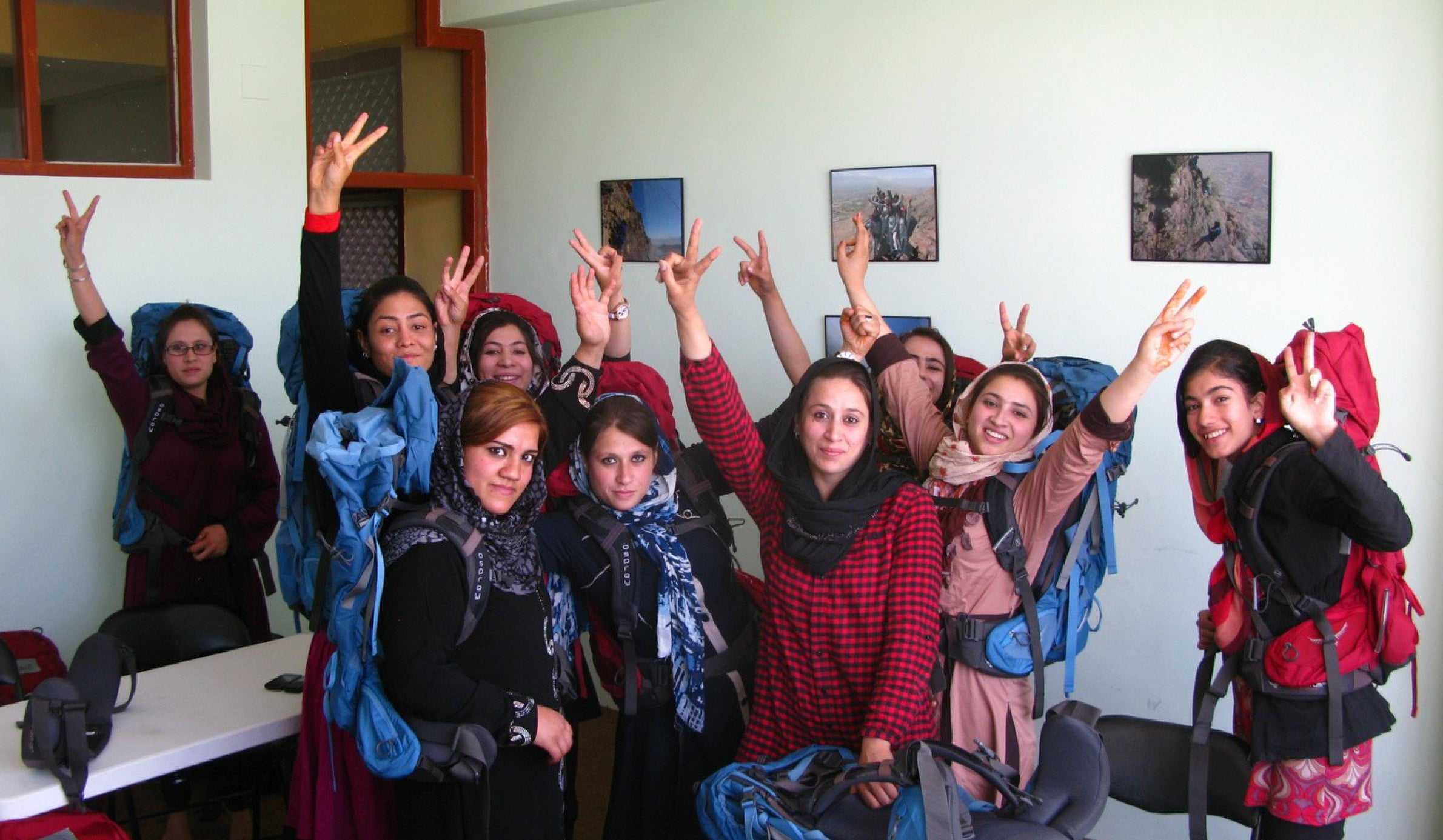 With final preparations complete, we’re ready to leave Kabul. Despite being sure one or two girls might not show up for departure day, they’re all here and ready for adventure. There are three main qualifications for participation in this groundbreaking program: 1) The families of each girl must support her and what she’s doing completely. 2) She must be physically fit and athletic and show a willingness to train—many of the girls come from Afghanistan’s national Taekwondo team. 3) She must show a spirit of service and giving back to her community and country.

After leaving Kabul, we drove north, heading for the mountains of the Panjshir Valley. While there’s plenty of dusty, monotonous landscape in Afghanistan, there’s also incredible beauty, especially in the agricultural river valleys like the Panjshir. Under the renowned command of General Massoud, the Panjshiri’s have fought off both the Soviets and the Taliban and today maintain control and peace of their valley. We found it to be an ideal and welcoming place for an expedition. 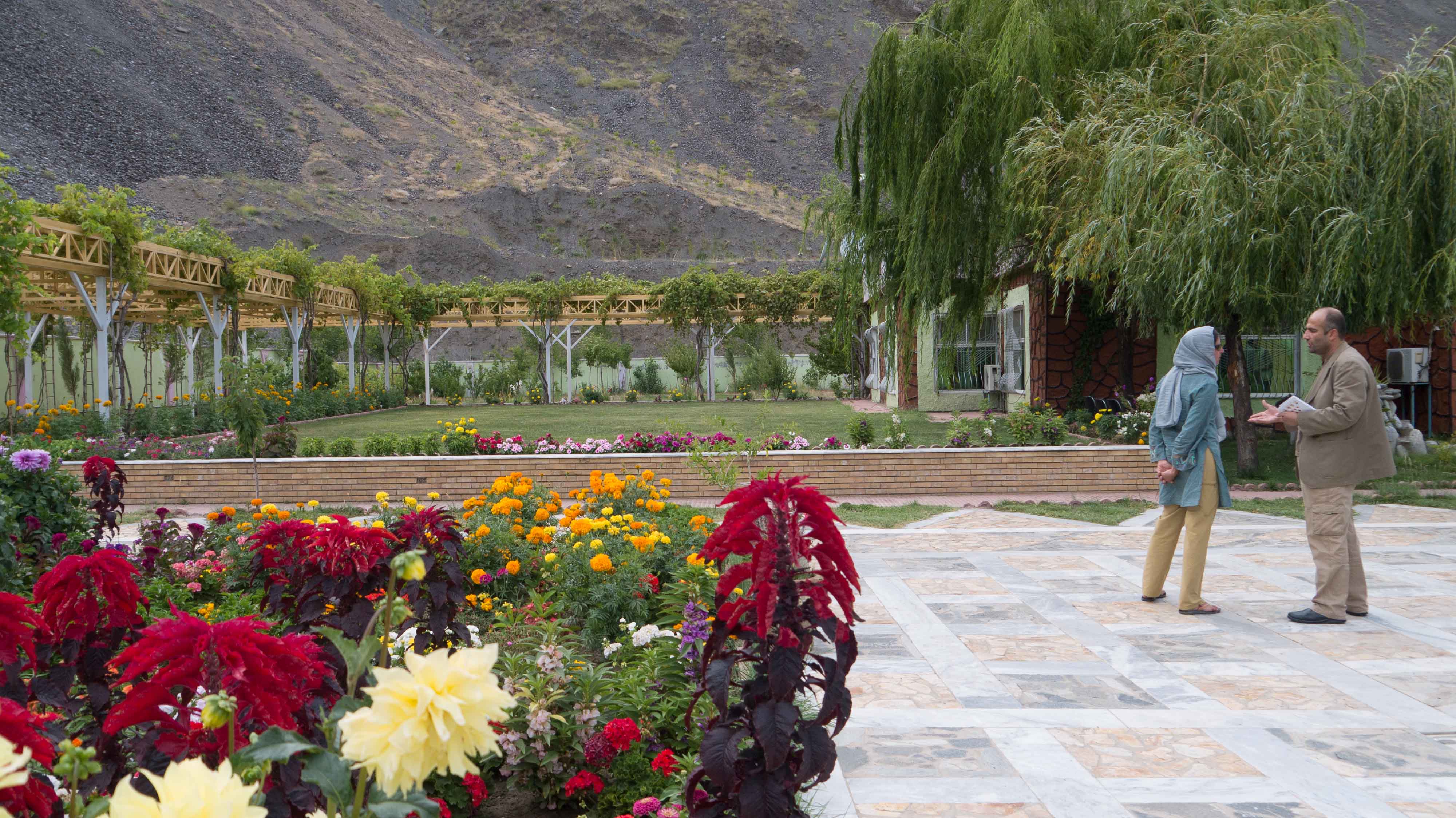 Before you go climbing in any of the mountains accessed by the Panjshir Valley, you must first secure the permission and support of the local government. Here, expedition leader Danika Gilbert talks with the governor’s secretary, Bahktiar, in the lush courtyard of the governor’s compound. We couldn’t have asked for more encouragement and kindness than we received here. 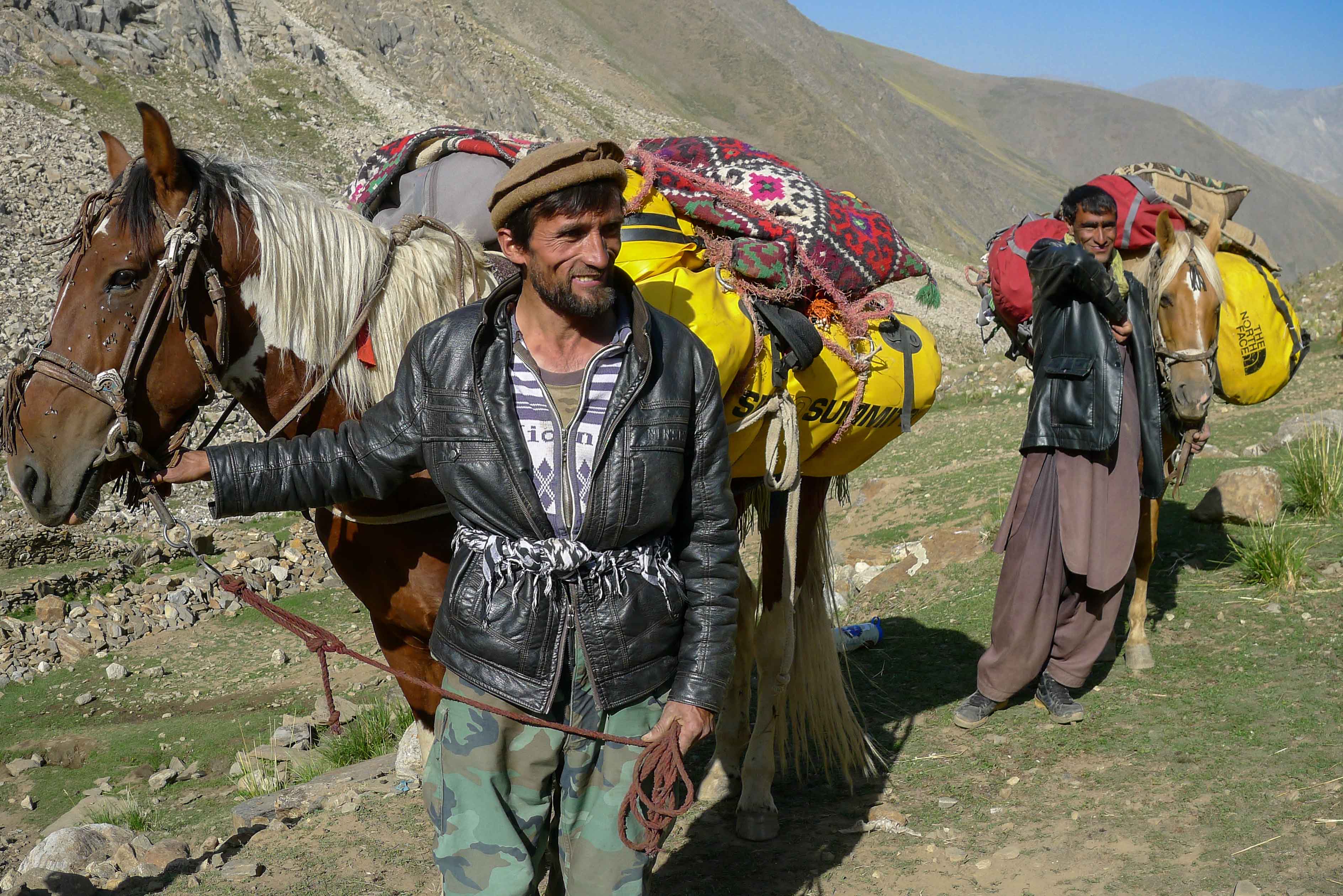 Large expeditions would not be successful without the help of people and animal porters. We hired 40 to 50 horse and donkey porters, and their human owners, to help ferry gear and equipment to our basecamp. 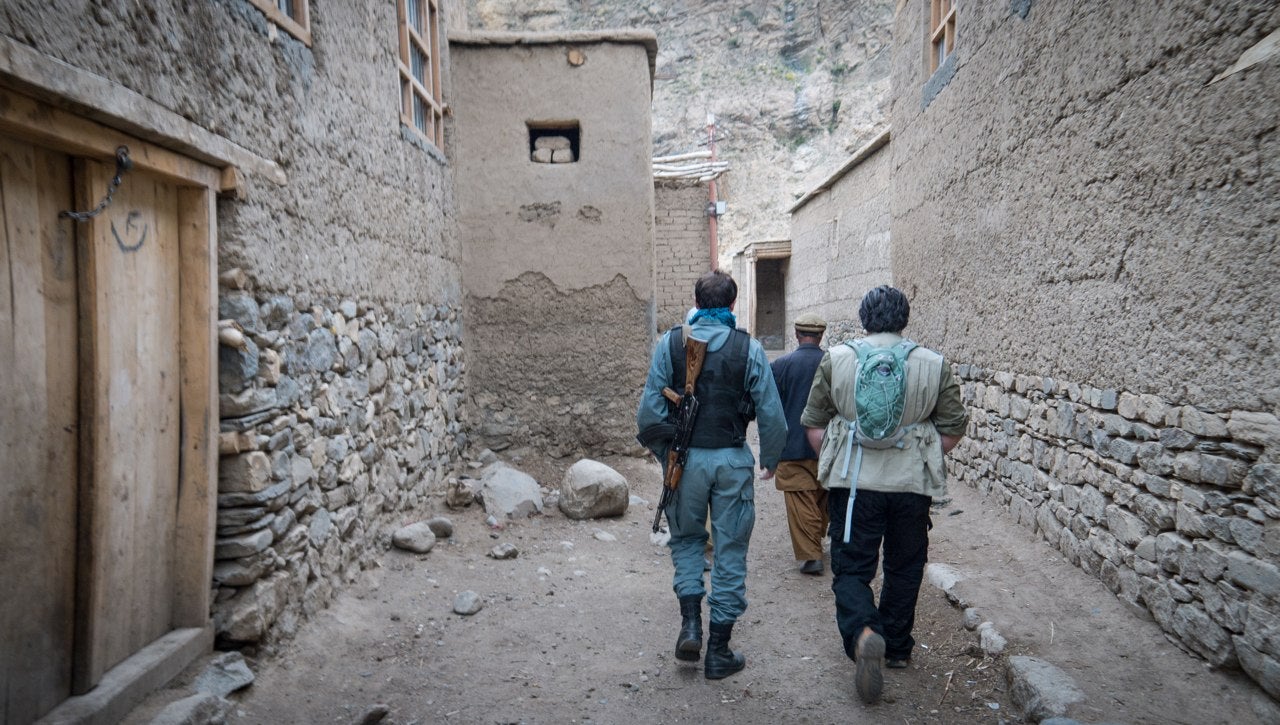 One thing you quickly get used to in Afghanistan is fire power. Whether in the streets of Kabul or in remote villages, heavily armed police, guards, and Afghan National Security are everywhere you go. In this photo, we’re walking through the streets of Kowjan as we head into the mountains. The Kalishnikov-carrying police officer accompanied us throughout our three weeks in the mountains. 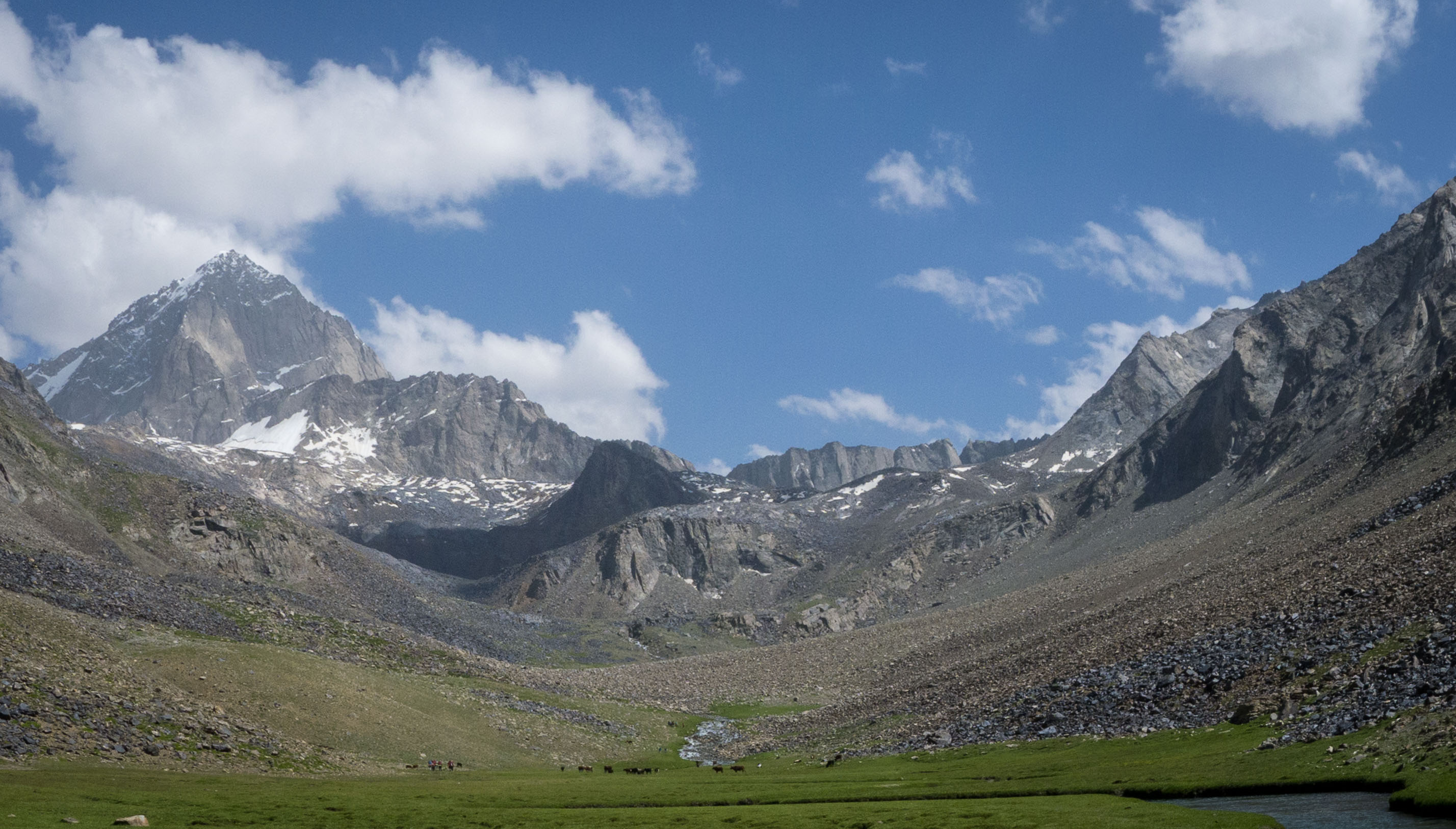 Though our expedition began in the Panjshir Valley, our climbing took place in the Mir Samir Valley, which drains into the Panjshir. Mir Samir is the large, spectacular peak seen here. At just over 6,000 meters, this steep, granite peak has seen few ascents and the potential for new routes on both Mir Samir and the surrounding mountains is nearly infinite. Truly a last frontier of climbing and culture. 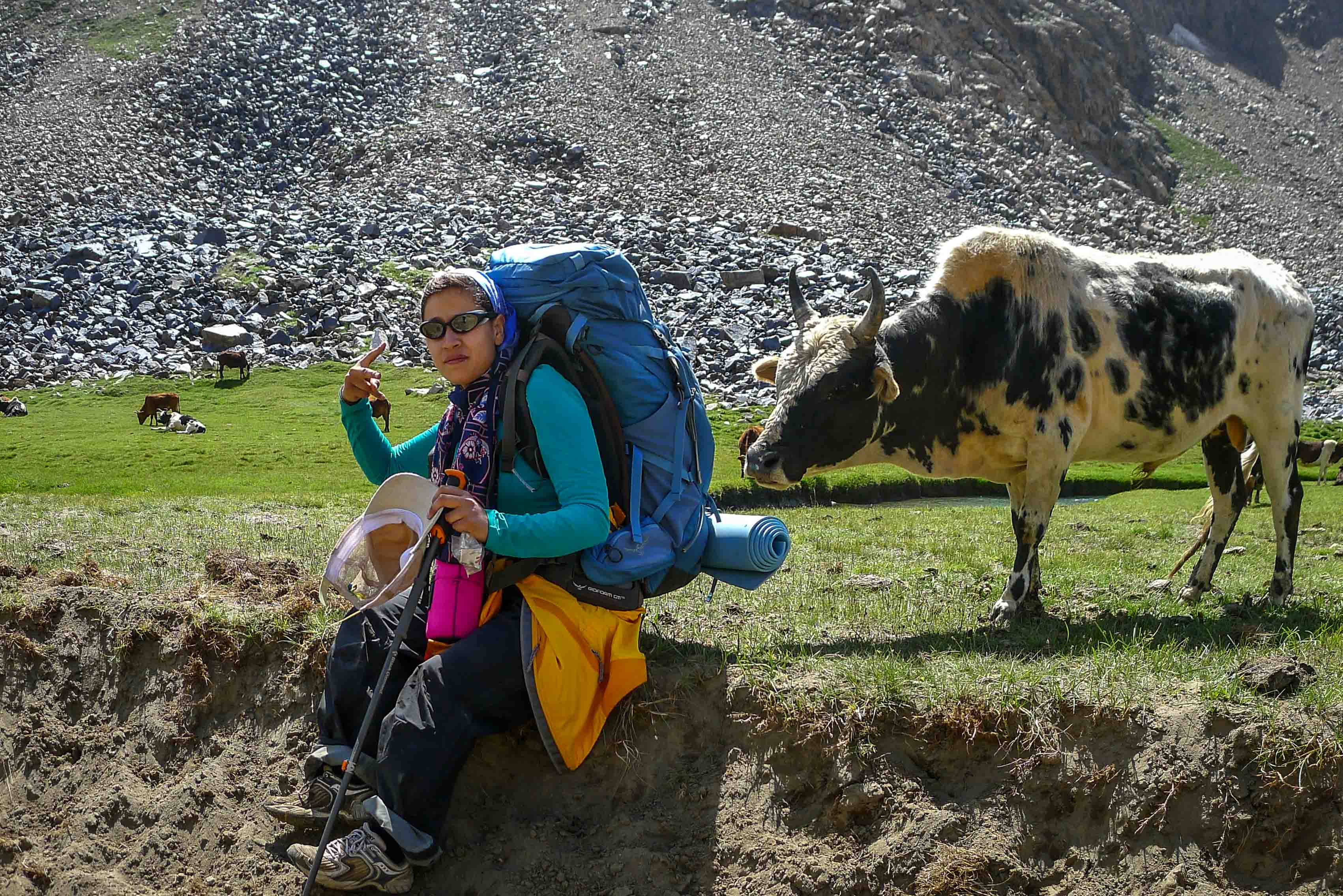 Our walk to basecamp took us through alpine meadows where shepherds graze their flocks in the summer months. This curious bull wasn’t afraid to investigate!

After four days of walking we reached our basecamp at 15,000 feet. As far as high-altitude basecamps go, this one was pretty nice: a flat meadow, fresh running water and protection from the elements by rocky slopes on all sides. We divided our groups so that the film crew and other male staff were camped to the right of the white cook tent, and the girls, myself, and Danika were to the left. In Afghan culture it is common and expected for men and women to be separate much of the time. Though it is not common for young women to travel without a mahram, a male relative who acts as a chaperone to young Muslim women.

While our two hired cooks didn’t have much in the way of expedition cooking experience, they managed to feed upward of 25 people fresh—and in this case local and organic—food every day. 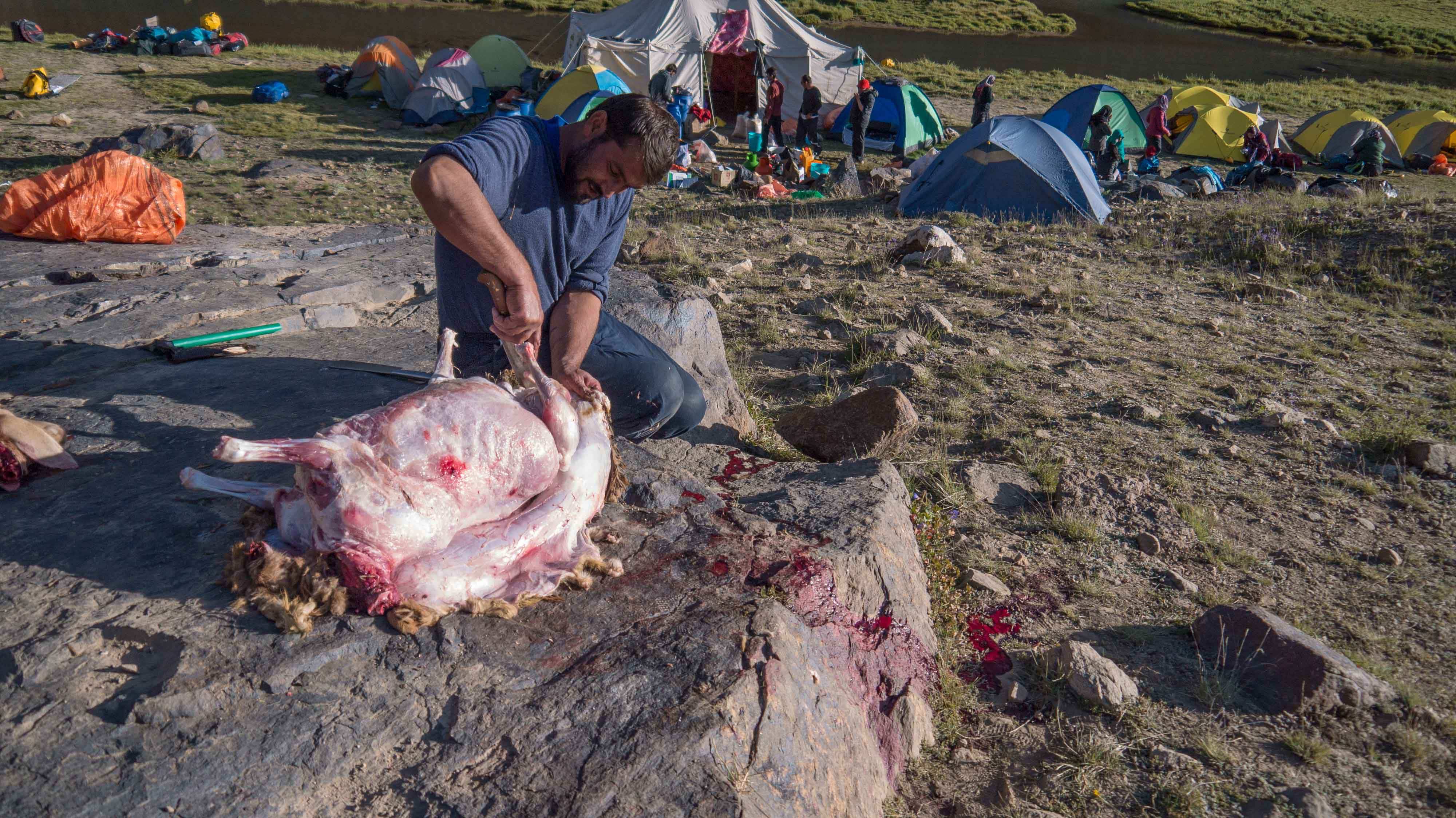 In Afghanistan it’s customary to eat meals shared off of a vinyl tablecloth spread on the floor. It is proper to sit cross-legged, share your plate, and eat with your hands. A typical meal is usually lots of rice, meat, and some vegetables accompanied by weak, sugary green tea. 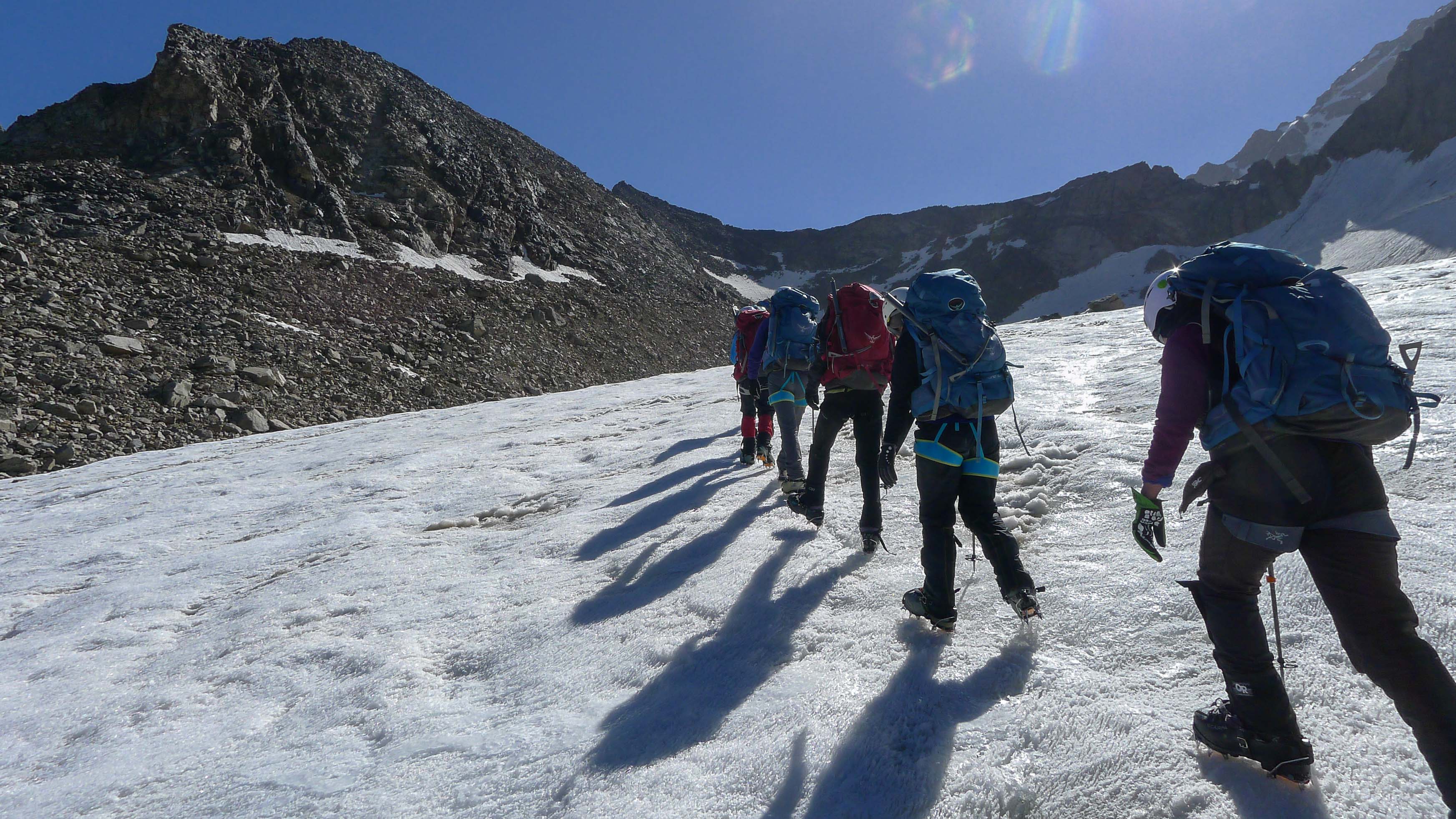 After several days of acclimatizing, training and resting in basecamp, we set off for our first objective. An alpine start was a first for the girls and after hiking and scrambling over talus with only the light of our headlamps for many hours, we finally reached a small pocket glacier below Mir Samir. Walking in crampons was relatively new to the girls but they took to it quickly and we soon found ourselves back on steep talus and then onto the final rocky ridge to the summit. 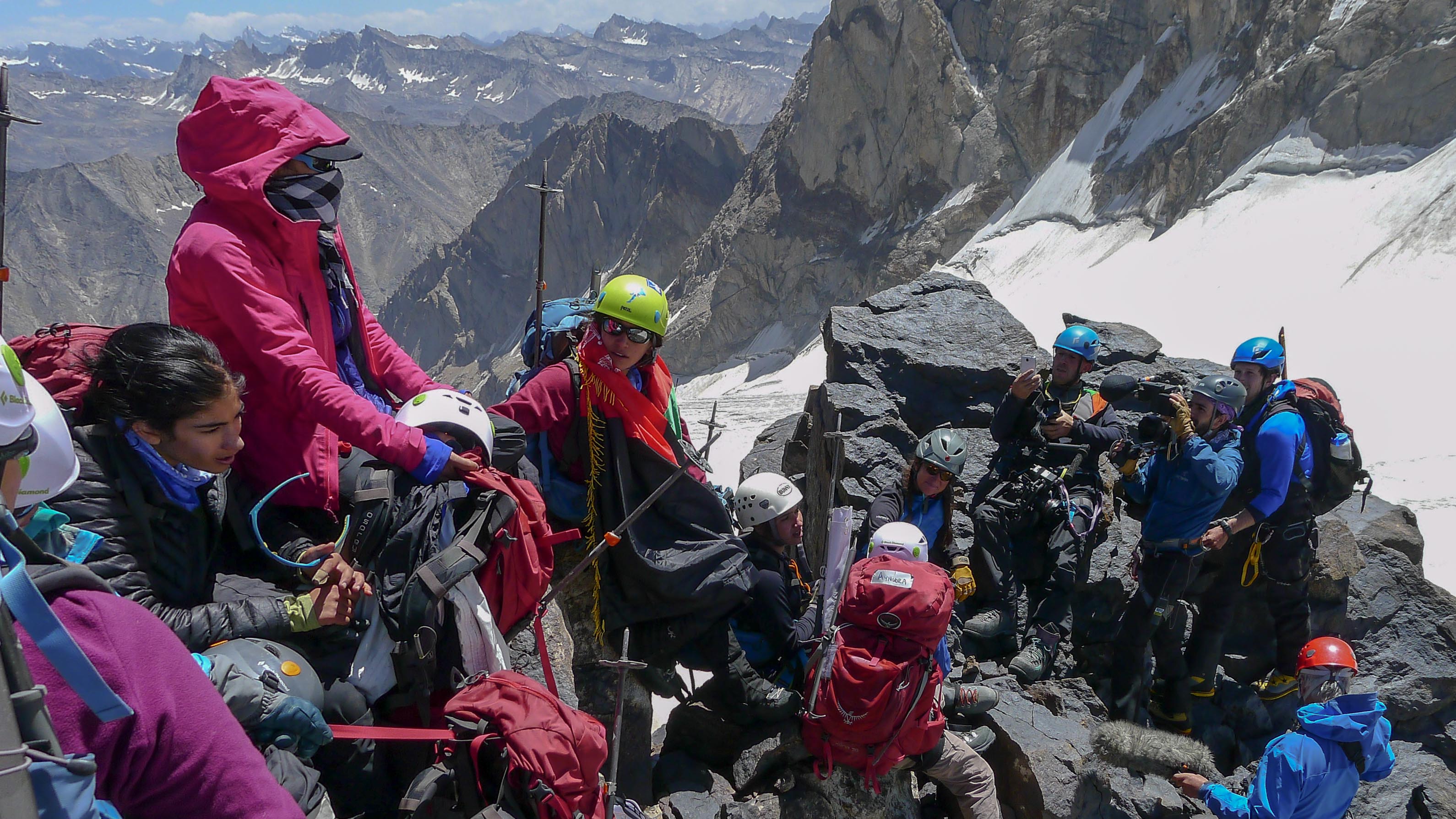 At just over 5,300 meters, seven hours after leaving camp, we reached the summit of a previously unclimbed peak. This was a momentous and historical occasion and the girls immediately pulled out the flag of Afghanistan and began singing the national anthem. In keeping with tradition of the first ascent party naming the route, the girls named the peak ‘Koh E Sher Doktrone Mir Samir’ which, in Dari, means ‘The Lion Daughters of Mir Samir.’

The peak we climbed is dwarfed by Mir Samir. Our proximity to Mir Samir, however, inspired dreams of returning to climb the beautiful ridgelines and clean granite faces of this largely unexplored mountain. 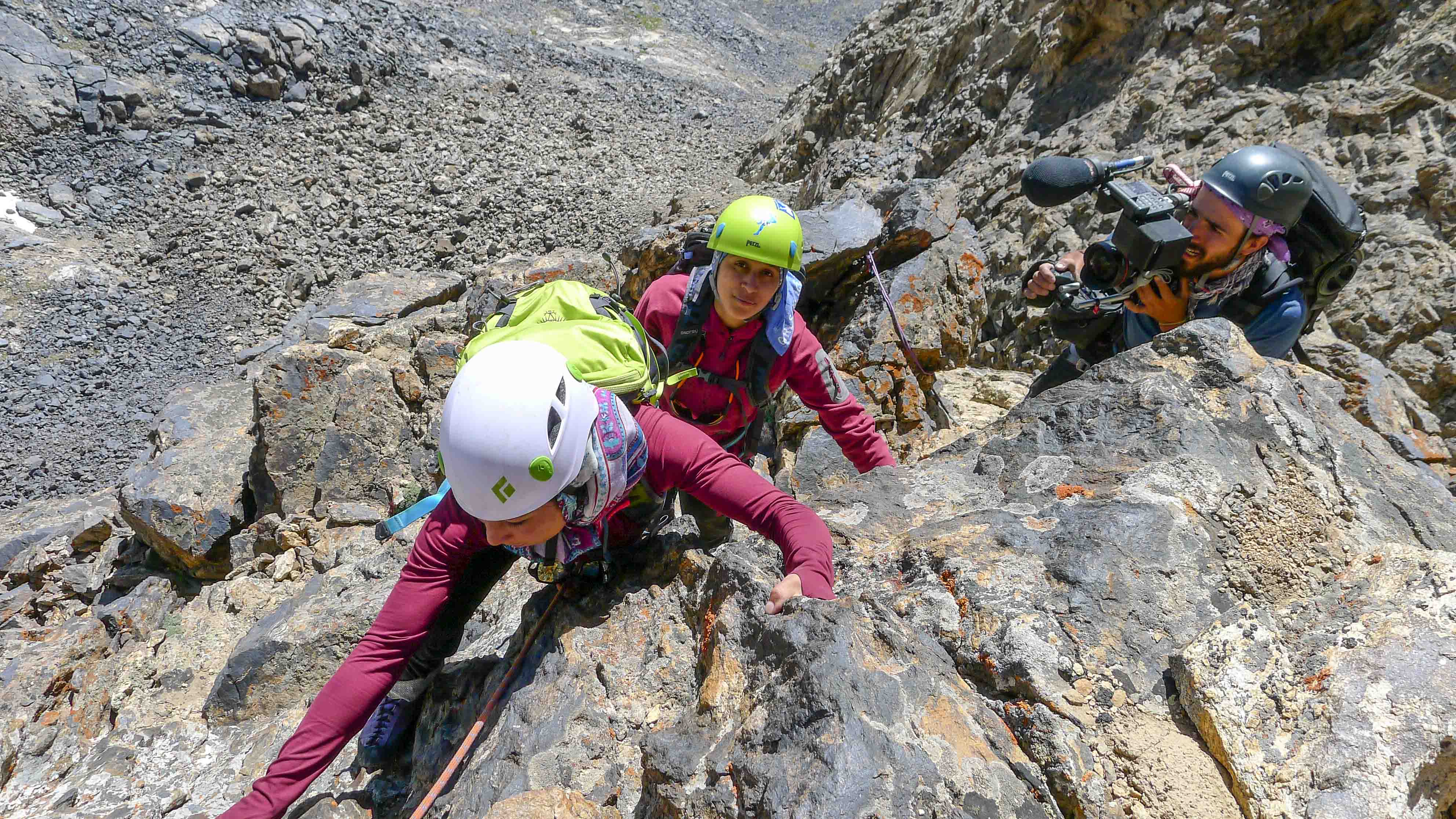 After a few days of rest in basecamp, I was lucky enough to take the two strongest girls and climb another peak, this one distinctly visible from basecamp. This time the climb was far more technical, ranging from easy 5th class to steep, loose 5.6. Most notable about this climb is that it was picked out by the girls. The rest of us experienced climbers thought it looked like a dangerous, choss- pile. Despite our attempts to dissuade them, they were determined to do the climb, so off we went.

And much to my surprise, we reached the summit, making for our second first ascent. Once again we had beautiful summit weather and spent about an hour on top celebrating, eating, and being interviewed by HBO/Vice. This was by far my favorite day of the expedition and one which I’ll always remember fondly. 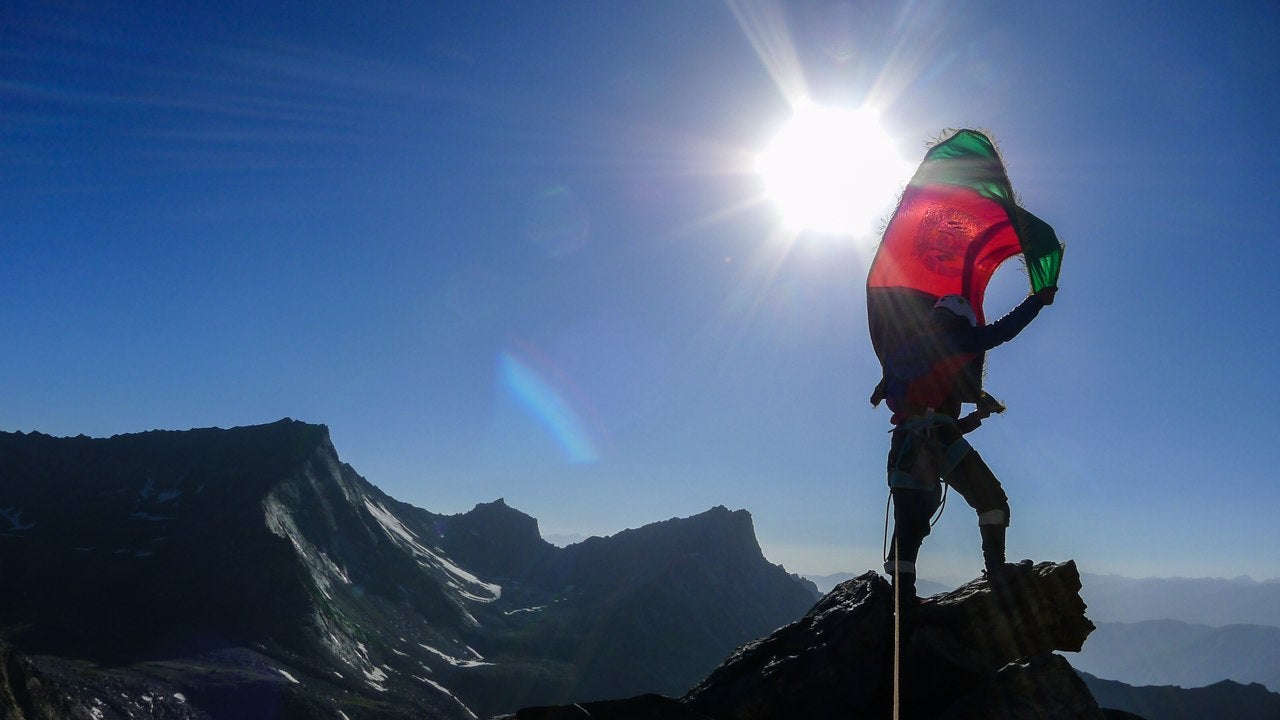 The girls perch on a summit block and proudly fly the Afghan flag—it actually blew away just after this, but we were able to retrieve it!. This was a climactic moment and I think truly life-changing for these two girls. The opportunity for them to recognize their strength, independence, and leadership as a vehicle for change is the entire point of the program. In interviews, the girls frequently commented on how climbing mountains as an Afghan woman proves that women can not only climb mountains, but do many other things they never thought imaginable.