Climbing In Rio: Paradise In More Ways Than One 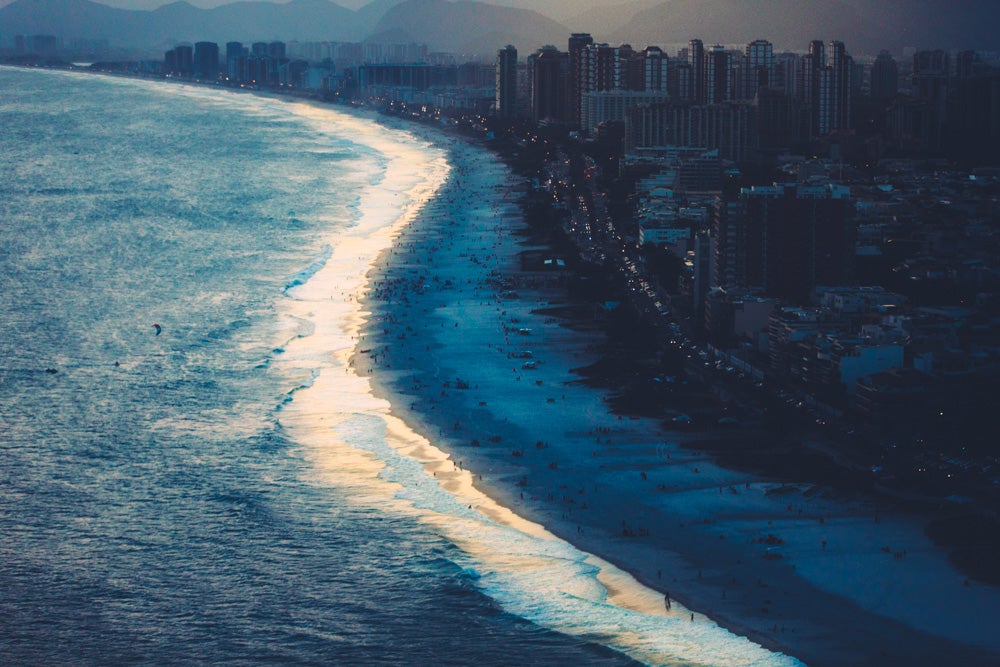 I’ve never really liked traveling. Museums and historical sites just aren’t my jam. Nor do I love lying on the beach, spending money at restaurants or seeking out large crowds—at least not in any sort of excess. I prefer to be busy, to wander with purpose, to explore wild areas. And I’ve found my native turf the best venue to do so. So mostly, I’ve just stayed close to home—until I discovered climbing.

Show me another activity that can be done in almost any country on earth, provide immediate community, lead off the beaten track and into the intricacies and intimacies of a culture, and fulfill a need for challenge, camaraderie and movement. Climbing is a medium for all this. Not knowing more than a few words, I’ve been immersed in the Spanish language at a remote refugio in Cochamó, Chilé for two weeks, walked alongside cattle herders to approach crags in Colombia, bought my lunch bread each morning at the same panadaria in remote Spain, and tied in with Argentines in their home country shortly after learning the Spanish words for on belay and off belay. I know no better way of getting into the nitty gritty of a culture more quickly than rock climbing. 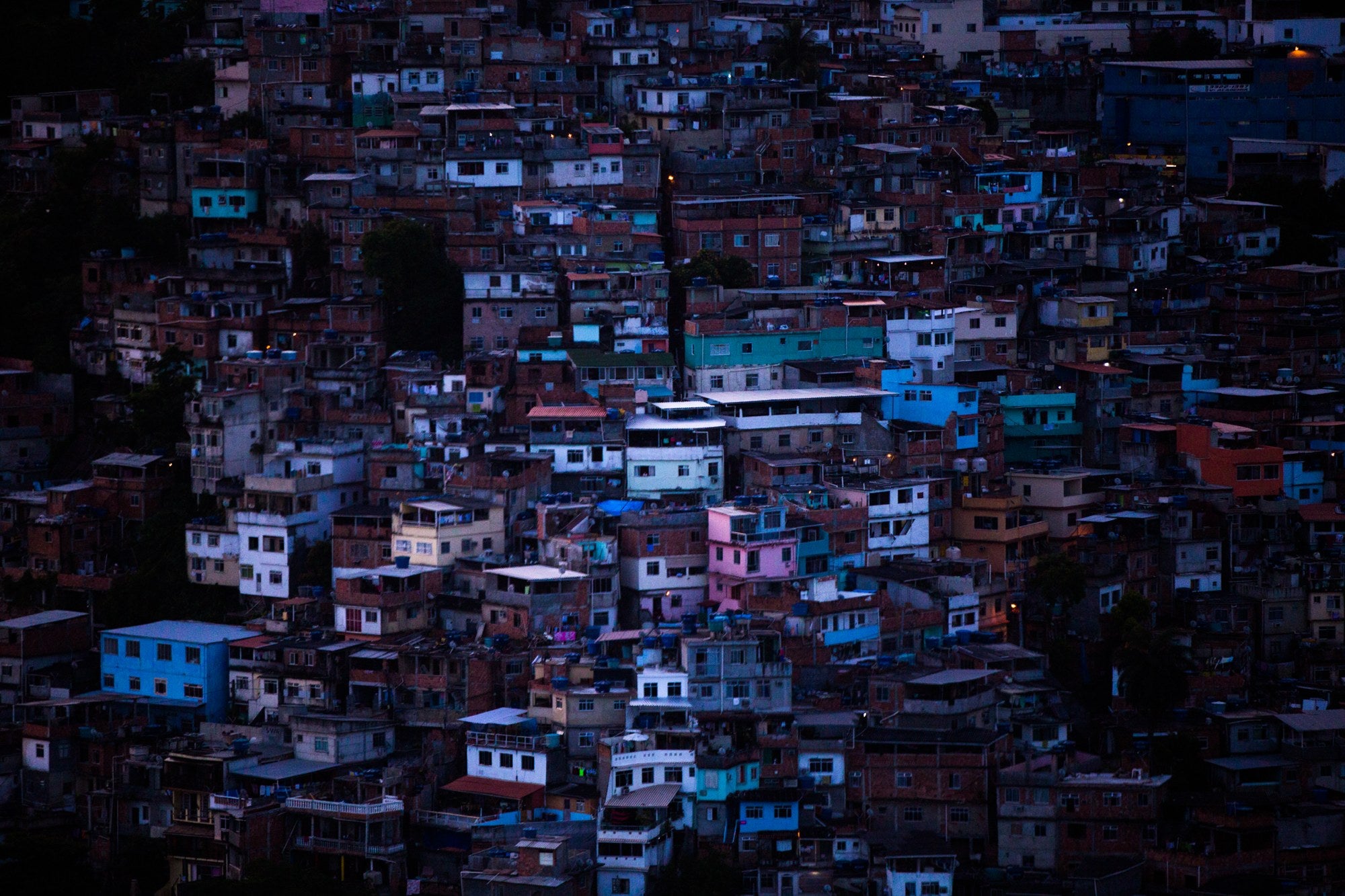 Rio de Janeiro is where ocean turns to jungle, which turns to granite monoliths with cosmopolitan neighborhoods and favelas in between. I jumped at the opportunity to visit, even if the constraints that defined the trip had us there during the Southern Hemisphere summer. Daytime highs were around 95 Fahrenheit with 80 percent humidity, and thunderstorms pummeled us nightly. Our climbing was certainly challenged, but we visited knowing that we’d be doing more “adventure climbing” than anything else, and adventure we found indeed.

Our team was comprised of photographer Forest Woodward, myself, and any assortment of friends, local climbers, or favela kids who’d tie in with us. Forest thrives on pushing the limits of what his camera can handle. I’ve seen him floating alone in the middle of the ocean, straddling five pool noodles to stay afloat, camera in hand and a goofy grin on his face. I’ve witnessed him taking photos in the middle of a rainstorm, t-shirt draped over the lens. Heck, I’ve watched him throw his camera into the air to get the shot. While photographing in the drenched climate of Rio was no big deal for Forest, the biggest challenge of the trip might have been luring him away from the beach volleyball courts and requiring him to wear shoes. 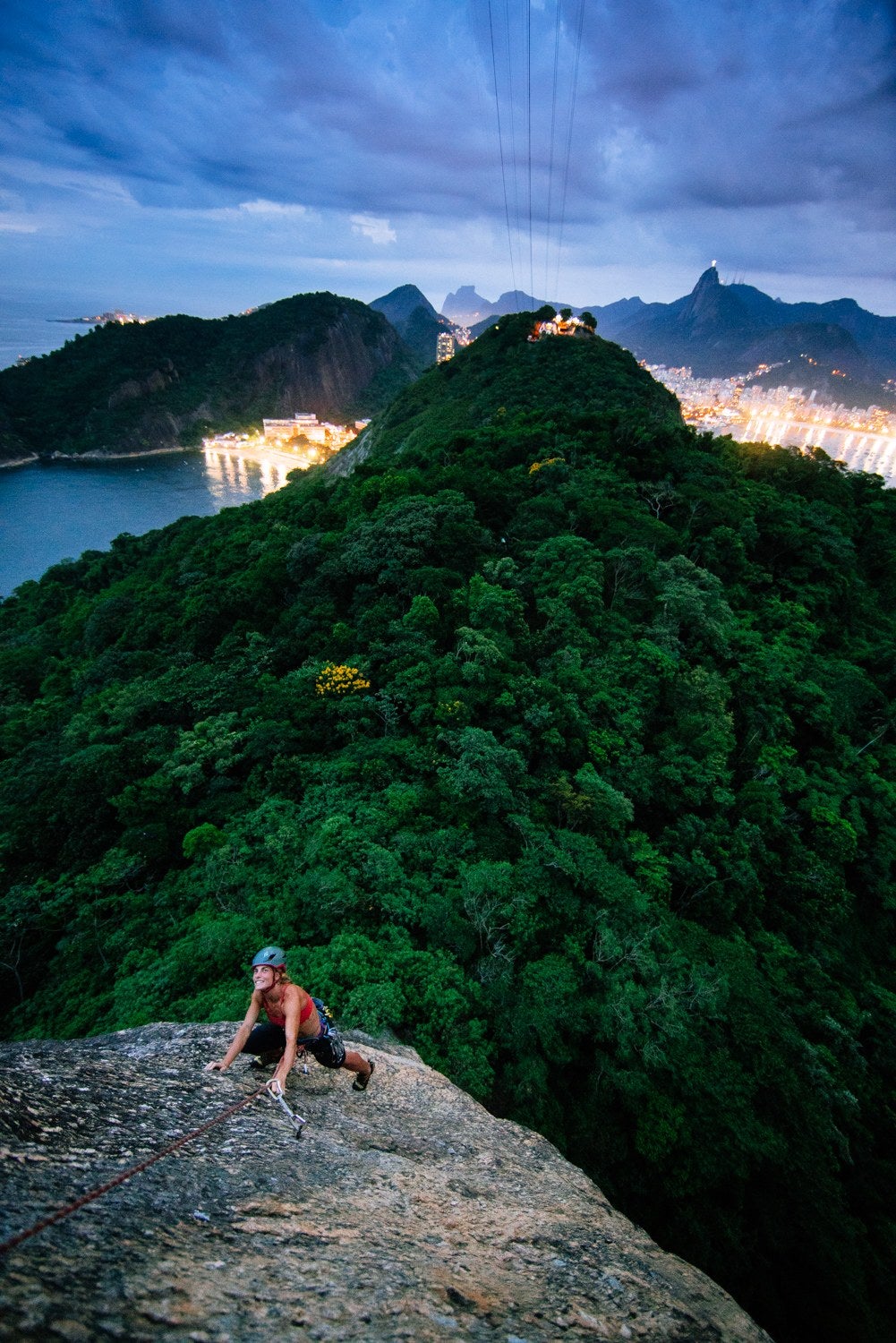 We spent three weeks in the city, beach bumming and body surfing, exploring bohemian neighborhoods and favelas, hunting for the city’s best juice and carne, making local friends and learning some Portuguese, and of course, climbing. Conditions were not optimal, and we slowed down to the unhurried Brazilian pace; expectations certainly had to be managed. Each day we climbed I wasn’t sure if the chalk in my chalk bag had turned to paste because of the humidity, my sweaty hands, or the rainstorm we’d been caught in the last time we went out. Yet we persisted in venturing into the jungle in search for rock, and made our way up enough monoliths and out to enough remote crags to call it a climbing trip.

It’s hard to climb in Rio without getting the song Jungle Love stuck in your head, and at times the jungle will drive you mad and make you crazy, with approaches being difficult to find and inducing sweat baths before you even arrive at the rock. Our de-proaches were often done in the heat of an evening storm, soaking wet, barefoot and muddy, racing through the dark jungle trying to convince ourselves that muggers were less crazy than us and would never venture out in such ferocious conditions. That said, there’s something rather epic about epicing in a jungle, and at the same time, something about epicing in a jungle that makes things slightly less…epic. It’s an experience that every climber should add to their list. 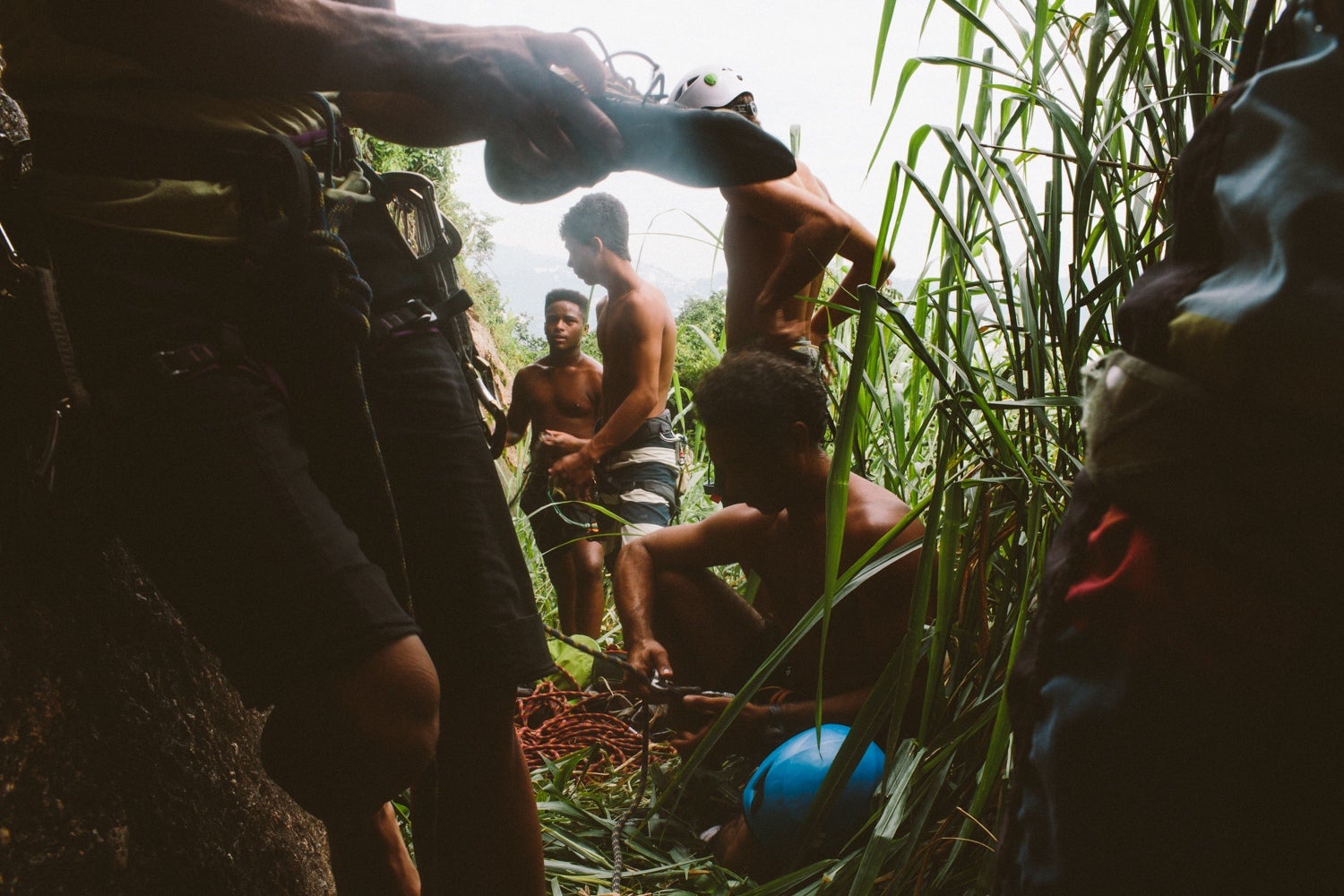 One day, as we slithered through stop-and-go traffic toward the Barrihna crag in Floresta de Tijuca, passing construction workers blasting a tunnel somewhere between Ipanema and Priana in hurried preparation for the Olympics, our local friend Nareida reflected in broken English, “Rio, it’s a jungle, a stone jungle. But there are many places that are paradise inside Babylon.” Paradise indeed, and let me tell you why:

Rio is famous for its monoliths. Tourists ascend the iconic towers by tram, cable car, bus, or in some cases even foot, to gain incredible views of the city. There’s a unique irony to the idea that a climber—usually one to avoid tourist attractions at all costs—can visit Rio, climb the best routes in town, and in the same breath be ticking off the boxes of the Lonely Planet tourist guide. Each tower has dozens of routes on phenomenal rock to please both the 5.6 climber and the 5.12 climber, with each vista just as good as the last.

There’s no getting bored on a rest day in Rio. Diverse neighborhoods polka dot the city and beg to be explored. Produce and fun gifts are ripe to be gathered in one of the many street markets, and samba halls do not discriminate based on nationality or ability. And then there’s the beach, the center of Rio’s culture, and when you can simply lie under an umbrella all day and sip coconut water to the sounds of surf, vendors, and happy Brazilians, you might not want to do anything else. People watching does not get much better. 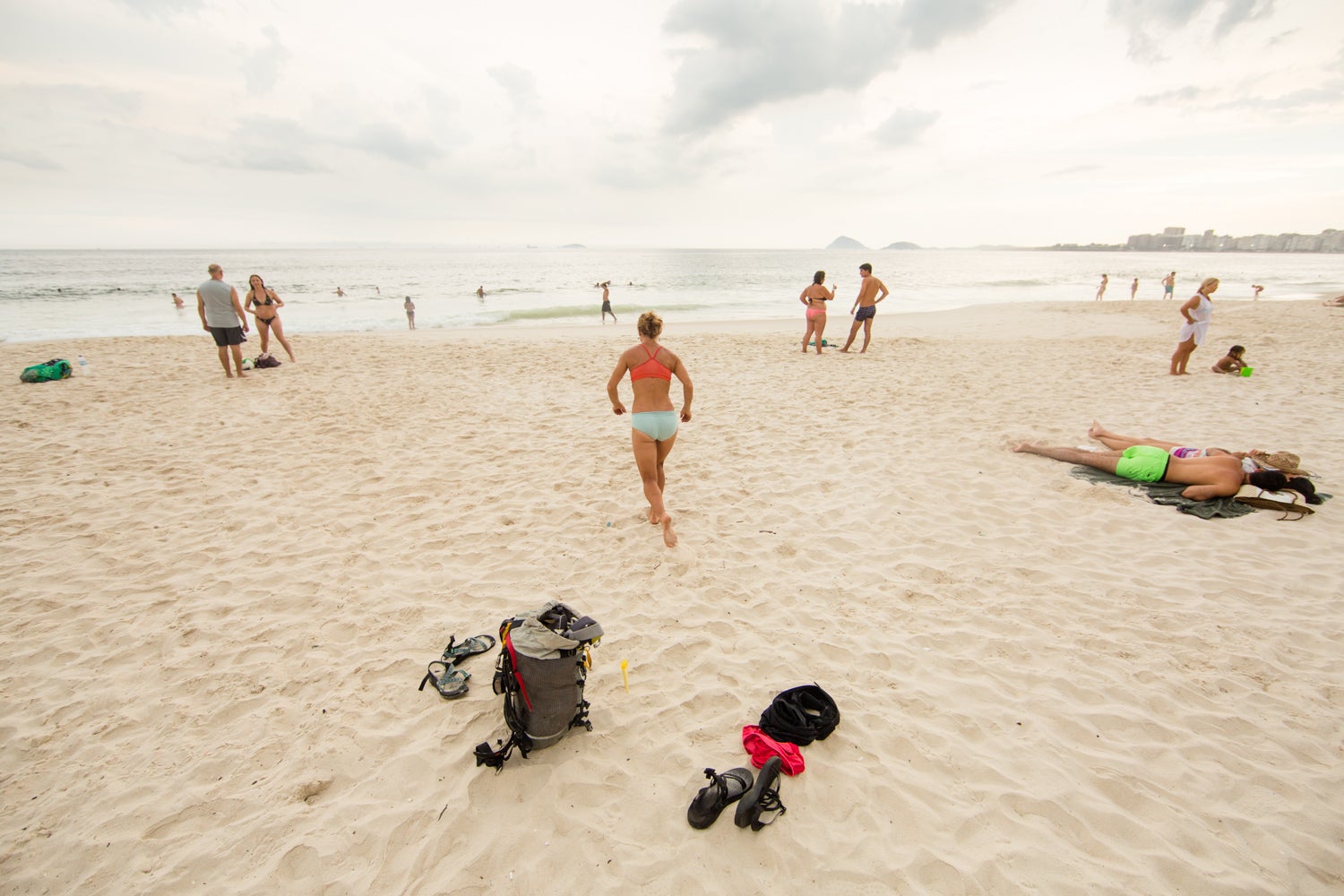 Cocos are a dime a dozen in Rio, or more specifically, range from about $1 - $1.50, a steal compared to what you’ll pay in the States. You can find them everywhere, top hacked off fresh to order, with refreshing and all-natural coconut water inside. In a city where sweating is a constant, the electrolyte-heavy water of coconuts could not be a more fitting drink. 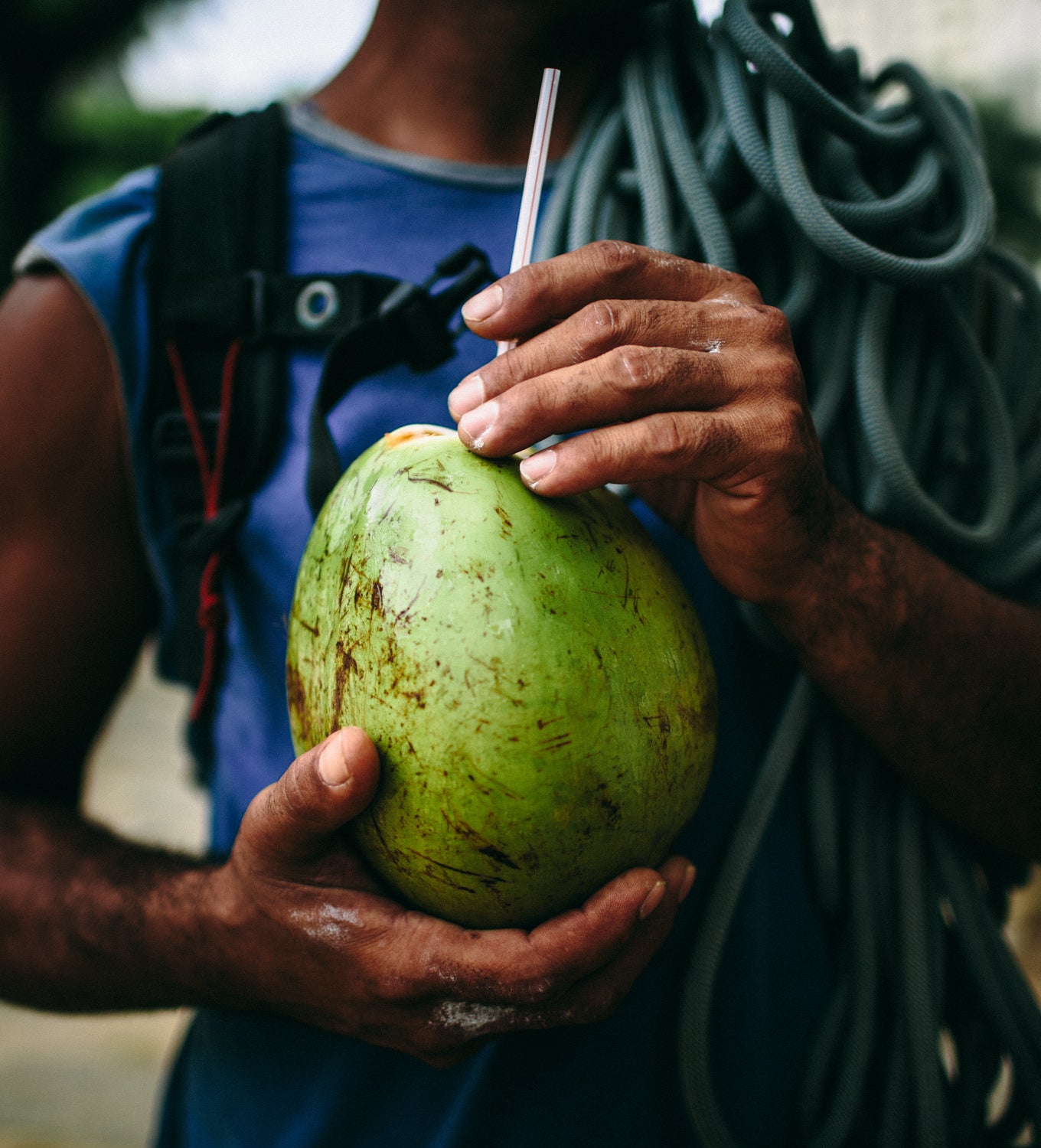 Climbing up to one of the 7 Wonders of the World

Sure, there are many 7 Wonders of the World lists, about as many as there are wonders in this world. But Christ the Redeemer is included in a few of these septets, and rightfully so. If you’ve ever wanted to have Jesus meet you on the summit of a mountain and survive to tell the tale, here’s your chance.

One of our local friends taught us the word empenho, a piece of Portuguese vocabulary that references effort and commitment, and can roughly be translated as “you gotta want it.” Climbing in Rio demands empenho to deal with city traffic, difficult weather, jungle approaches and generally hardman climbing. When our third attempt to climb Pão de Açúcar ended in a new highpoint at 35 meters up the 260-meter face and hurried rappelling in a torrential rainstorm, bolts of electricity all around, we realized the full meaning of empenho. However, to help provide some incentive, on top of two of the monoliths in Rio where much of the climbing is found—Pão de Açúcar and Corcovado—you’ll find vendors with food and drink, ready to welcome you and your pocket full of Reals, making all that empenho slightly more worth it. 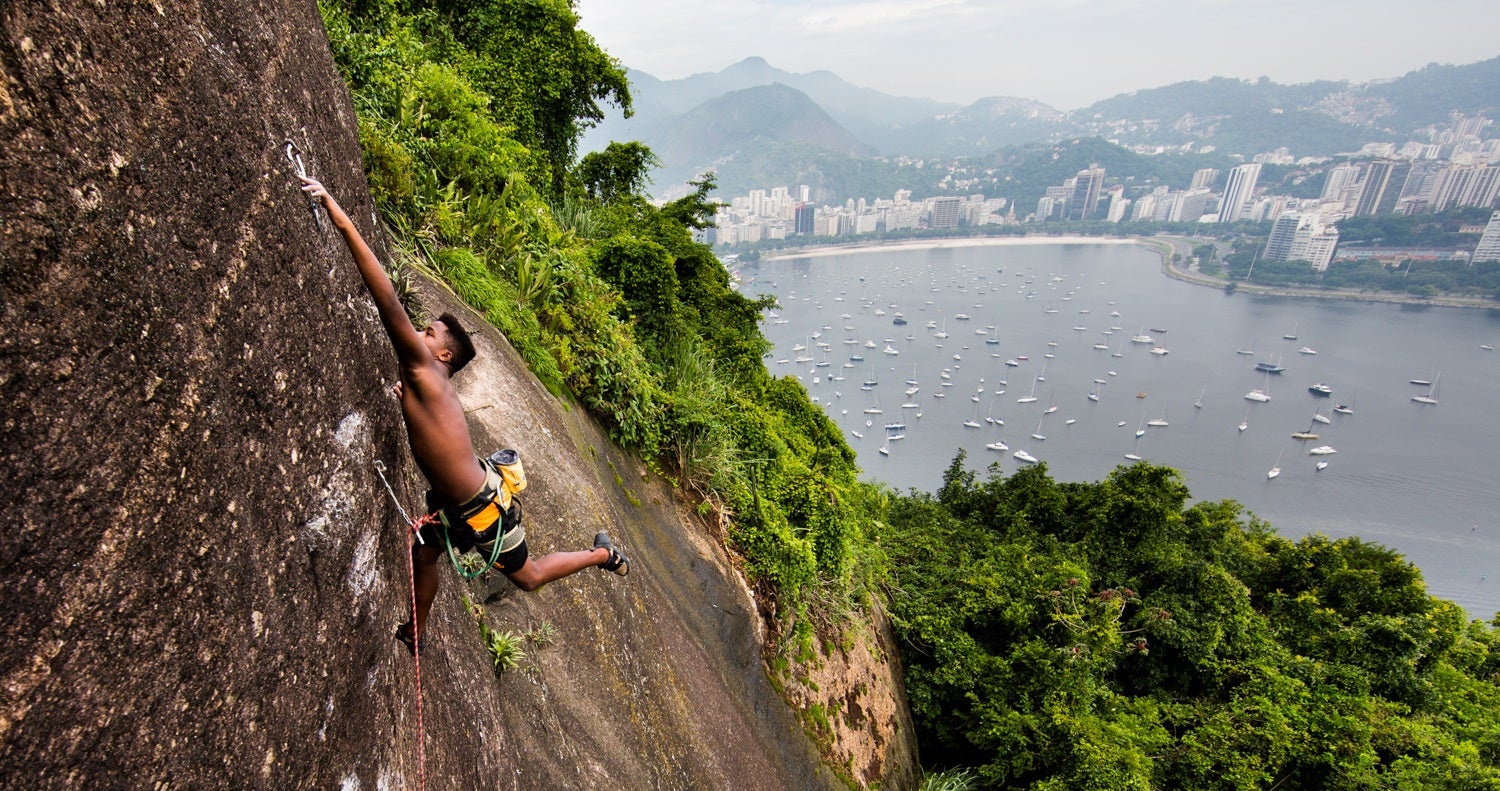 Every summit in Rio is a quick hang glide flight from the beaches of Ipanema. And if that’s not your jam, most of the climbs in Rio that reach the top of a monolith have either a walk-off, tram, or cable car to bring climbers down. While this can at times be as logistically complicated as finding the rappel route, it’s certainly less risky and time consuming, and we were able to relax with our cerveza and ice cream at the top, knowing that our descent would be quick and safe. 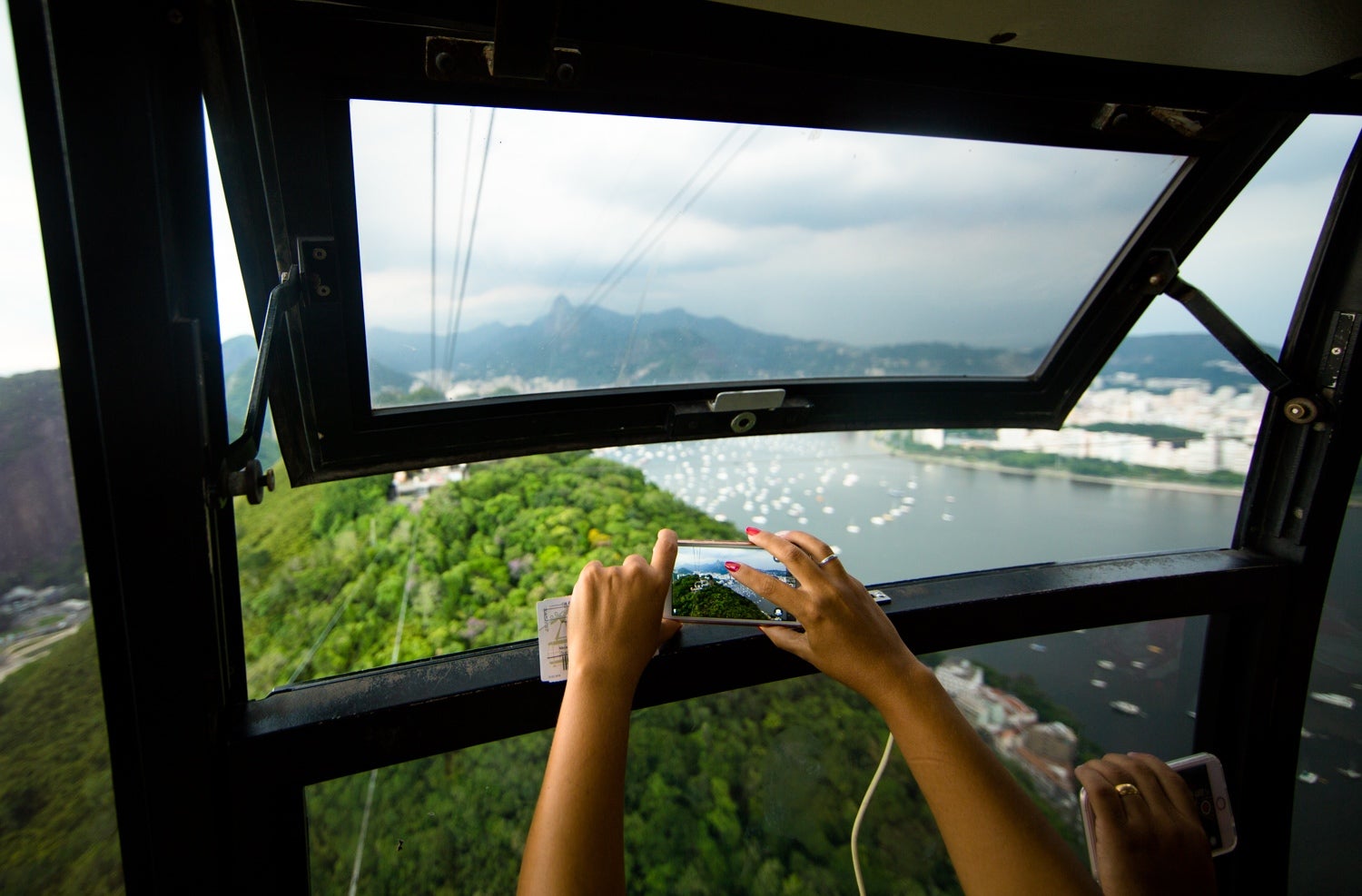 Our local friend Andrew told us that climbers in Rio are fond of practicing two sports at once: swimming and climbing. While he was referencing the sweat factory that goes into high gear when climbing in high heat and humidity, I like to think that climbers in Rio also enjoy the ability to climb in the morning and be on the beach sipping a coconut and rolling in the surf by afternoon. Now if only someone would install that waterslide straight from the summit to the Atlantic.

Rock doesn’t discriminate; in Rio it rises out of favelas, wealthy neighborhoods and tourist traps alike. Additionally, the rock in Rio does not discriminate based on climbing ability: whether you’re a 5.6 trad rambler or a 5.14 sport climber, there’s something for everyone. Each of the monoliths has an assortment of moderate routes to the top, as well as long, difficult (and even yet-to-be-freed) lines for you hardmen and women out there. The sport crags start around 5.12, and offer extremely high-quality routes on good stone, deep in the shady forest, the chiriping of cicadas muffling the sounds of the city. For the pebble wrestlers, bouldering exists all over Urca, the area in town in which you’ll find the Sugarloaf. 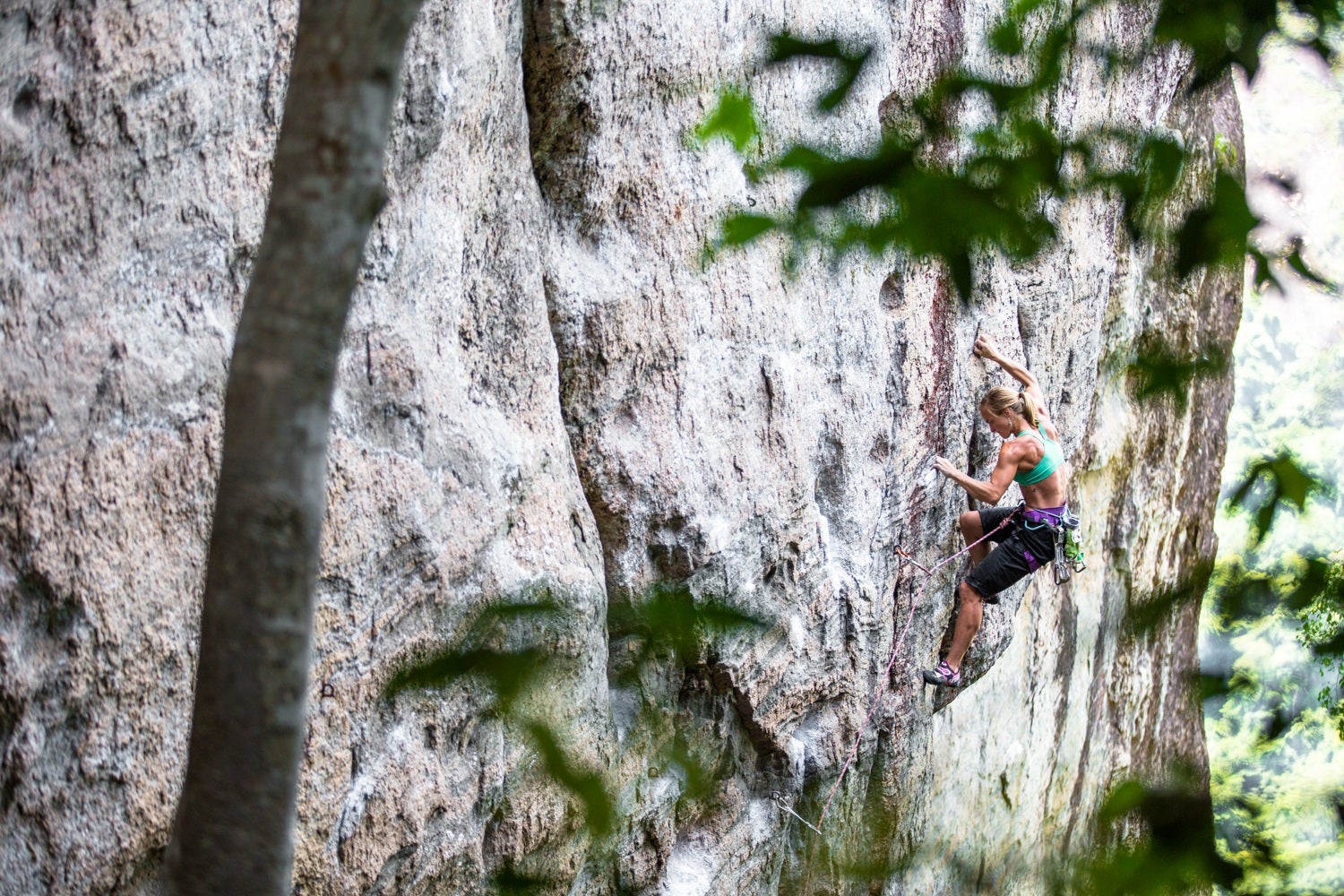 After hours upon hours searching online for information on climbing in Rio, I had an idea of what I wanted to climb, but no idea how to do so. Beta can be a tricky thing in new territory, and it became clear to me that if we were going to be successful, we’d have to know some locals. I had a serendipitous meeting with some Brazilians during a stint in Siurana, and they added me to the Facebook group Vai pra rocha?. Here I was able to connect with a handful of very knowledgeable and experienced Cariocans eager and proud to show us around their city. We were beyond impressed with the character and the cohesive family nature of the climbing community in Rio, and enjoyed days with these spirited Brazilians at both the crag and gym.