Climbing The Matterhorn ... Of Namibia 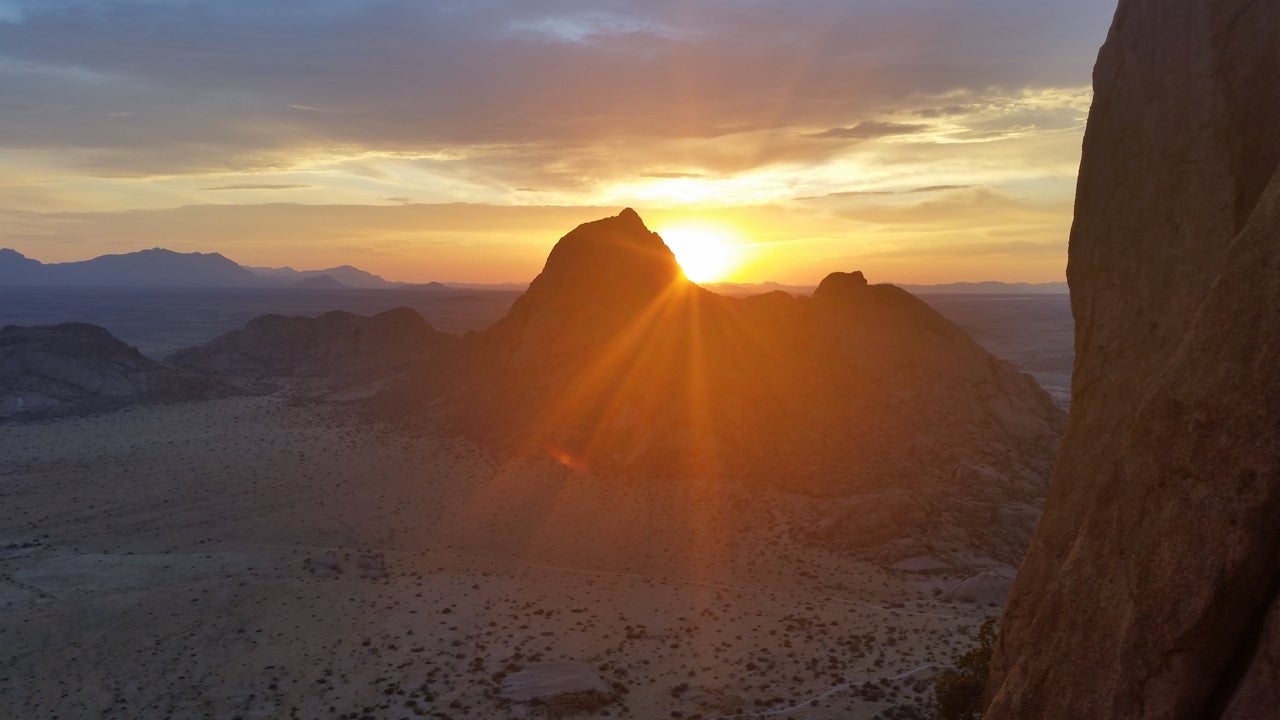 “There is a gate. Well, a fence. That you need to climb over,” on the approach. No problem, I thought, while I asked why it was there.

“Well, this is to keep the animals in that part of the park. They were reintroduced some time ago and we try and keep them there.”

Makes sense to me, I thought. Then I asked, What kind of animals? 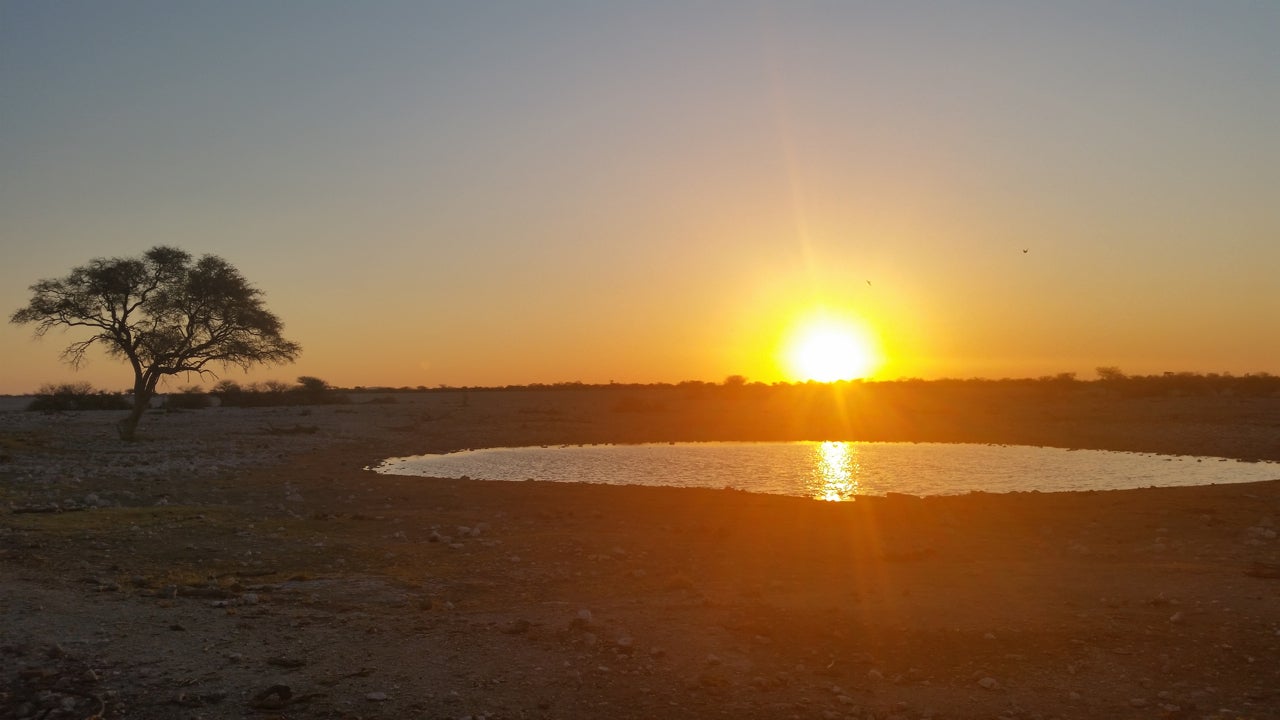 “There are zebras, cheetahs, leopards…”  I don’t remember what other animals he mentioned, as I was too hung up on CHEETAH and LEOPARD. I’m no zoologist, but I know these are not house cats, and suddenly my desire to go on an adventure wasn’t as strong anymore.

We had been traveling for nearly two weeks in Namibia when we arrived at Spitzkoppe, dubbed the Matterhorn of Namibia. I was traveling with my wife’s family and we were a group of 10 including 4 children. While some people—read: me—may shudder at the thought of traveling with four children plus in-laws in the hot African sun for two weeks, the whole trip was going far more smoothly than I'd anticipated. The country is well developed and easy to travel in. All the children were dealing super well with the traveling and cruising the country as a group of 10 was relatively easy. Nonetheless, after a couple of weeks of nonstop exploration, a lot of driving and some intense heat, I was getting pretty tired. We had hoped to climb a few days in Spitzkoppe during the trip, as one friend had described it as “the City of Rocks on steroids.” But the heat was much too intense to allow more than a short visit. It was hovering around 104 degrees every day, which was taking its toll. 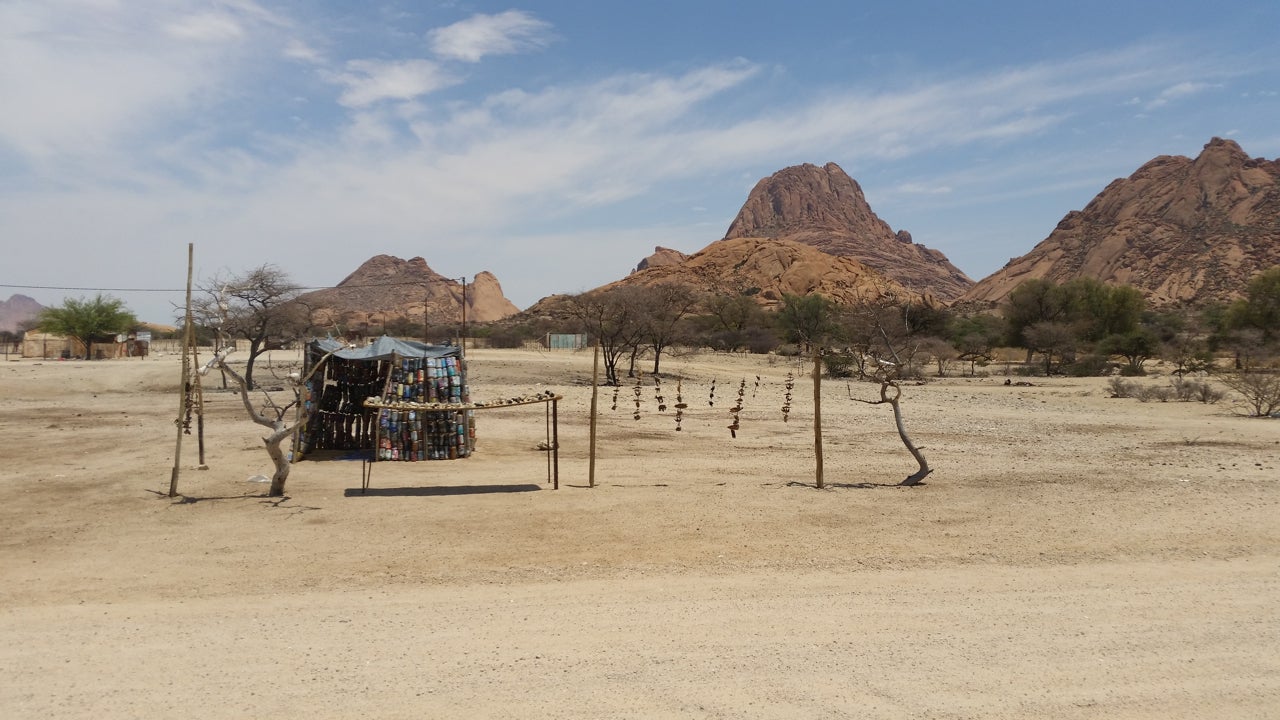 Another concern for the climb was the rappels, which called for two 50-meter ropes. While I had planned for this, I hadn’t planned that one of our vehicles would get stuck in the sand requiring me to use one of them in an emergency towing mission. This happened, of course, while I lead the way on a “short-cut.” As it turned out, our second vehicle, a Toyota “Fortuner” (dubbed misfortuner) was NOT 4WD, and we learned this the hard way, stuck in a sandy river bed. In an effort to free the car, I sacrificed some of our climbing rope and only succeeded in burying the car more. After seeking some local help, we got the car freed, but now the thought of doing three 50-meter rappels with nearly 10 meters gone off one rope was posing a mathematical problem that was difficult to ignore. 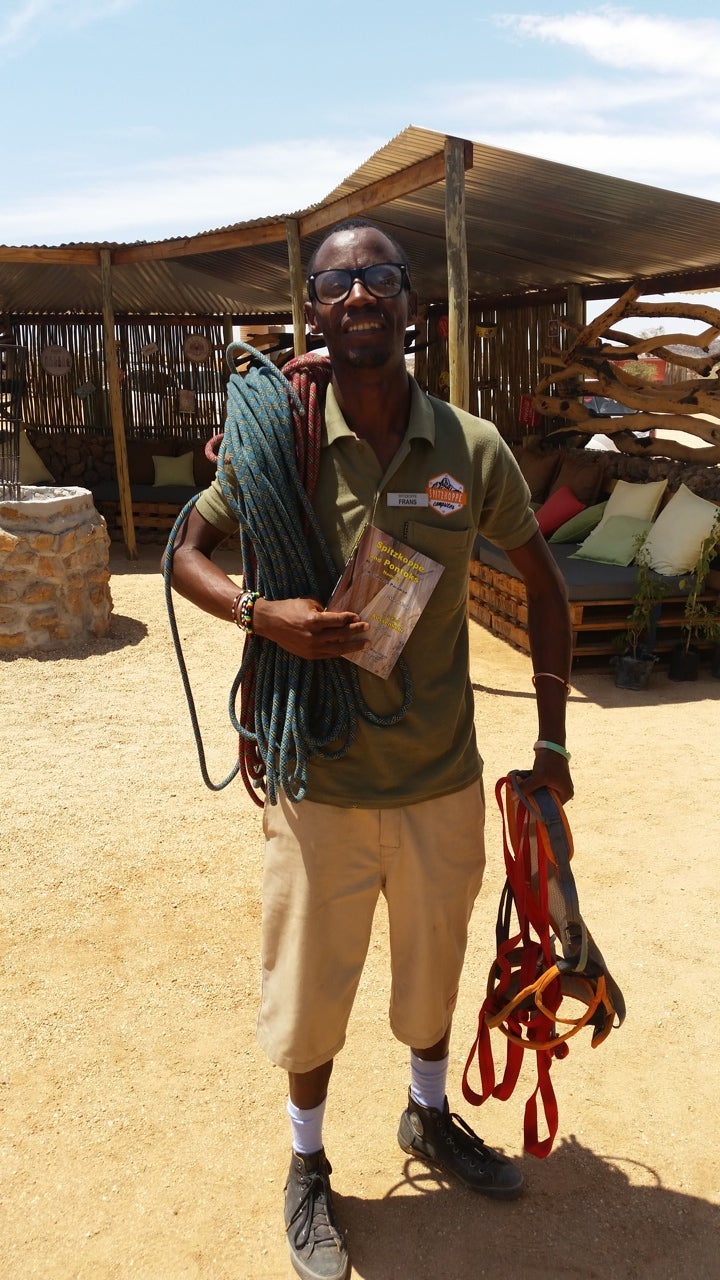 The Normal route up Spitzkoppe isn’t extreme, but is impressive nonetheless, considering it was climbed first in 1946. It involves about 600 meters of ascent with a lot of scrambling and four pitches of roped climbing clocking in somewhere around 5.8 including a bit of wide groveling. Unfortunately for us, the route faces east, so we planned on an early start in hopes of beating the heat.

My wife’s alarm sounded at 4:30 a.m., and did little boost me out of the tent. It had been one of those camping nights where sleep wants to come, but just doesn’t. Between the strong wind overnight and the heat all I did was toss and turn. And if I wasn’t, then our daughter, Olivia, was. And this usually involved getting hit by a leg an arm or one of her stuffed animals. And then there was the “bird?” I’m not even sure if it was a bird, but some creature was making a call all night that made the grim reaper sound like Celine Dion. If it wasn’t for the millimeter=thick nylon cocoon of our tent protecting me—or maybe it was the fatherly obligation to stand guard of my family—I would have locked myself inside the car and waited out the night. As one would imagine, by the time the alarm sounded a second time, and I was ordered out of bed, I wasn’t exactly chipper.

We geared up and sneaked out of camp as quietly as possible, trying not to wake everyone else. We had about an hour walk before we would start the “approach.” We clipped what gear we had to our harnesses in hopes that the jingle-jangle of the gear would scare off any animals. Quickly we reached the gate that we were told about the following day, which turned out to be 10-foot fence. We climbed up and over and then it struck me: now we’re stuck inside with the animals! There are very few places I climb these days where I'm not at the top of the food chain. But in Africa one quickly realizes you are most certainly not! A gold camalot clipped to my harness, the most menacing piece of gear we had, did little to comfort me and day couldn’t break fast enough.

As the approach got steeper, the worry of large cats diminished, but now, however, I was on high alert for those critters without any legs: snakes! The picture of the cobra in the guidebook was enough to keep me on edge. I hate snakes. And the ones that live around Spitzkoppe are a far cry from the little gardener snakes. Every time I squeezed through some boulders or plowed up a grassy gully, I was sure my headlamp would pick up a beady set of eyes just before something attacked me. I jumped every time a lizard ran past or a leave rustled, and I couldn’t wait to get on some steeper ground where, if nothing else, there would be fewer hiding places for uninvited guests.

As the sun lit up the horizon we arrived at the climbing. This was the one part of the day I felt comfortable with. My fears of being mauled or bitten by something went away and we raced up a few pitches of climbing to arrive on the summit in the early morning light. We had a radio with us and checked in with Caroline’s parents and our daughter from the summit, wrote in the log book and enjoyed the Patagonian-style winds that kept the temperatures tolerable while we were on top. After taking in the scenery it was time to see how long these rappels really were. 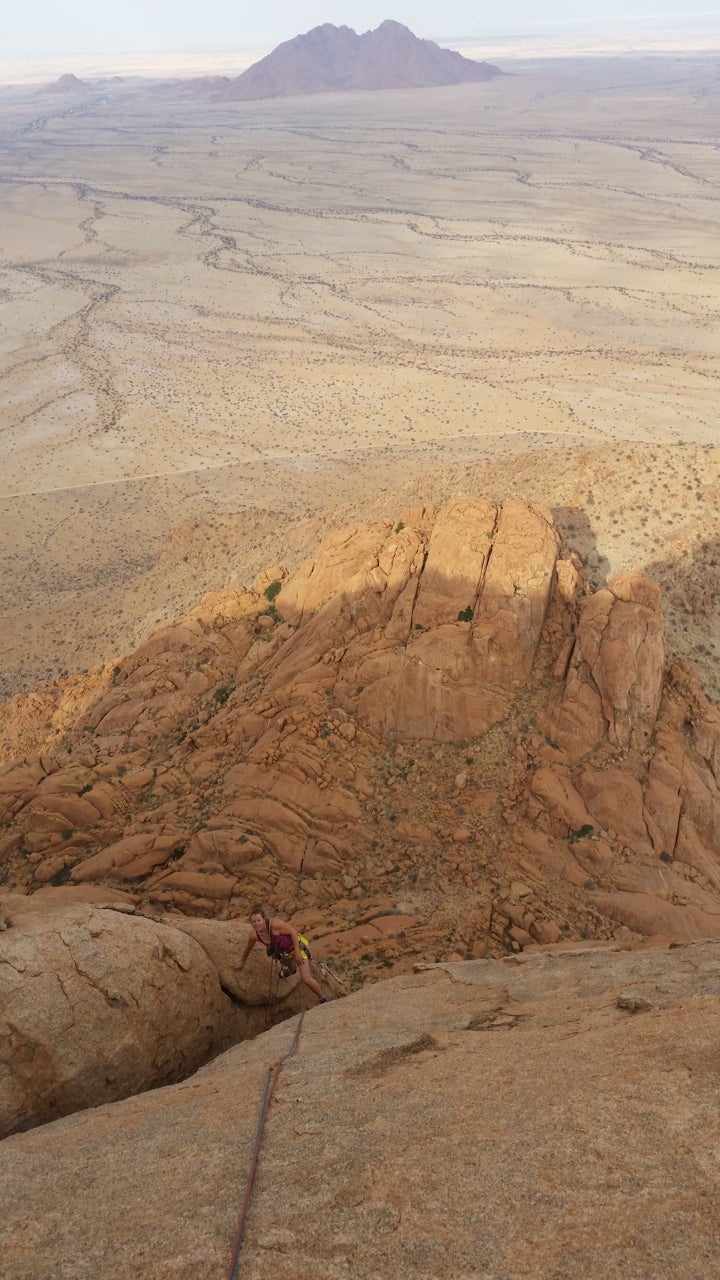 Most of my travels lately are focused around climbing. While I enjoy this, it's easy to become so blinded by objectives that you miss out on some of the other experiences that traveling has to offer. In Namibia, the climbing component was merely an accent mark. It was great to have the opportunity to climb Spitzkoppe, but the real reward was being reminded what it is like to explore again. Doing this with my family—both immediate and extended—was a real treat. Namibia is a country full of contrast, from wildlife to urban life, deserts to oceans, wealthy second homes to extreme poverty, intense heat and cold ocean breezes. It is a great place to explore the culture and geography, and if you find yourself there, make sure to pack some climbing gear. Just make sure your ropes are 50 meters!