Climbing Through Pregnancy: An Interview With Super-Psyched Lyn Barraza 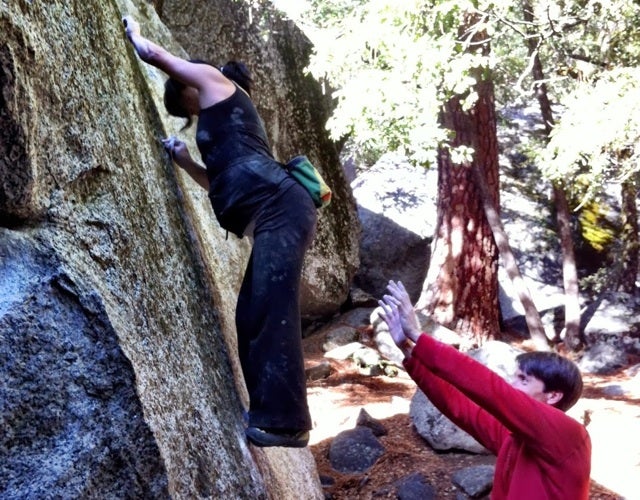 For those of you who know Lyn Barraza, you know that she is one of those superhuman people. She has more energy than I've seen in just about any human being. She tries harder and longer than almost anyone at the crags, and has an infectiously psyched attitude. She also runs one of the most successful climbing gyms in the country, Berkeley Ironworks, and is a member of the Access Fund Board of Directors.

Last year she had her second child, Conrad, and her pregnancy didn't seem to slow her down a bit. In December, two months away from his due date, she managed a very pregnant ascent of the Camp 4 classic Red Suede Shoes. To most people this sounds completely unattainable. Yet, for all of us who know Lyn, it seemed more normal to have her out at the boulders trying hard at seven months pregnant, than sitting on the sidelines waiting for Conrad to make his arrival. I asked Lyn a few questions about being pregnant, as she is one of the only women I know who continued to boulder successfully throughout pregnancy. She was kind enough to answer them. I hope you enjoy!

This was your second child, but first while you were climbing. Can you tell me a little about how each pregnancy was different? Were you as active with your first pregnancy as you were with this one?

Although I've always been sporty, (before climbing, I played basketball, volleyball and softball in high school and ran recreationally), when I was pregnant with my first child at 23, I hardly exercised unless it was walking from my car to my daily milkshake. I do vaguely recall one walk at about seven months pregnant that felt incredibly challenging. This time around, I climbed until about three weeks before Conrad was born and only stopped after a day of bouldering at Castle Rock when doing a sit start to a climb caused me to develop symphysis pubis dysfunction after which I could barely walk without discomfort. Fortunately, it didn't last long and Conrad was born and I was back to climbing five days later.

Did you have any symptoms or feel that your body told you to stop at all?

Not so much for climbing, other than the symphysis pubis dysfunction. I did have a period between three and six months where walking up hill was really, really difficult. There is this one hike behind the Claremont Hotel that has about 1,000 feet of elevation gain that I used to do fairly often pre-pregnancy. When I tried to do it at about four months pregnant, I couldn't make it to the top. I felt like I was going to pass out. So I had to try again a few days later, and while I did make it, I could only take 10 steps and then had to rest for a full minute before taking another 10 steps. I decided to lay off hiking for a while after that, but at month seven I felt way better for hiking and made it to the Druids over Thanksgiving week.

How long did you climb for during your pregnancy?

Until three weeks before I delivered.

Do you have any advice for women climbers and pregnancy?

Do what feels right to you. I tried to rope climb primarily after month four because I thought it would be safer and that's what most pregnant women do, but I just didn't like it. The harness wasn't comfortable, I didn't like following (I've always preferred leading when sport climbing and my husband put his foot down on leading) and in a lot of ways, the length of routes didn't do me any favors—I was so out of breath after every route. So I went back to bouldering and it just felt more right to me. I was lucky to have a spotter who was very committed to helping me land safely when I fell, which makes a pretty huge difference.

Everyone is different, though, and you really have to pay attention to what your body is telling you because each woman's body will respond differently to the pregnancy hormones and what is right for your other pregnant friend may not be the right thing for you. Also, don't be too hard on yourself. This is the time to just enjoy climbing if you want to or step away for a while if that is what you'd rather do and no guilt either way. For me, climbing is a lot about getting into the great outdoors and replenishing myself, so even though I couldn't climb a lot or at a very hard grade, I needed to be out there for my sanity.

You run one of the most successful climbing gyms in the country. How do you see climbing women and pregnancy? Is it more common?

It is absolutely more common. It's a totally normal and fairly regular sight, in fact. I can list at least five women who climbed pregnant in my gym in the last year, and if I thought a bit harder about it, I could probably come up with ten names. Women are more active, in general, during their pregnancies and doctors are saying that it's safe to keep the body moving, it's natural for women who love to be active to continue to be so even while pregnant. It also provides a bit of normalcy. Heck, everything else in your life is changing pretty drastically, keep climbing if you can!

How do you see pregnancy in professional climbing?

Those things seem totally compatible to me. Something I've been telling you for years. Professional climbers serve as an inspiration to the rest of us and as a female climber, I'm way more interested in women climbers who share a similar experience to me and share their journey than teenage and 20-something bros pulling down the hard numbers. I'm super psyched to see how professional female climbers rise to the challenge of climbing and motherhood. Plus, maybe that'll inspire gear manufacturers to finally make a comfortable pregnancy harness and maybe some cute, but not too expensive, maternity climbing duds.

And lastly, how the heck did you send Red Suede Shoes while 7+ months pregnant??

It helps that it may have been my 50th ascent of that problem. As my husband has told me for years, a gut helps with slab climbing. I was able to put his theory to the test and he was right!