Climbing Through Pregnancy: Banff, Amnios and Breaking The News 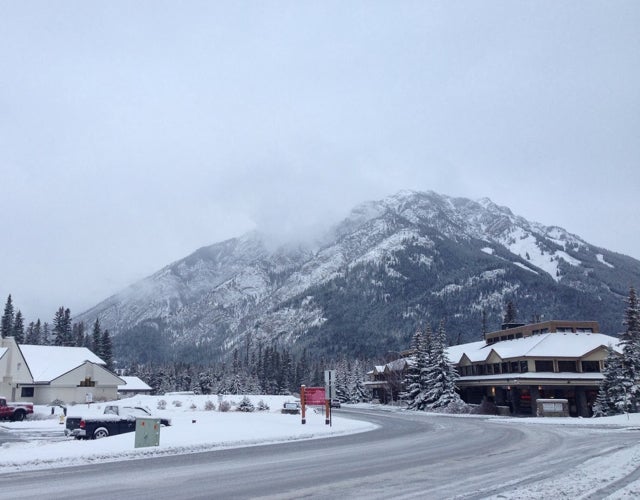 This post first appeared on Beth Rodden's Blog. For more info, follow along on her athlete page.

I never thought taking a bite of an apple would be scary, but there I was, staring down a bright red apple, wondering if that first bite would send me running to the toilet. I took a bite. It tasted … delicious!

About two weeks into the second trimester my nausea had totally subsided. It wasn't like a switch turned off one day, but over the course of a week or two I began to feel like my old self again. Colors flooded my diet again: greens from leafy vegetables, reds from beets and radishes, oranges from squash and pumpkins. It felt great to have one of my passions back in my life again: good food and cooking!

But at the same time, one of my other life passions seemed to be slipping away: Climbing. My bothersome finger and ever-expanding belly kept me mostly away from the rock this month. I top-roped a few 5.8s outside and traversed my home wall a few times, but by and large I didn't climb very much. I definitely wanted to, but my body was telling me to slow down, so I listened. My body felt loose and taxed. I instead became a religious walker. I explored trails that were literally less than a mile from my house but that I had previously never set foot on. It was neat to be able to find a new way to enjoy and experience Yosemite, without ever touching granite. I also lifted and did shoulder exercises two or three times per week. I mainly wanted to keep my tightness up in my joints. And it felt good to get a little workout in my upper body. I think this was more for the mental aspect than the physical, just to get a bit of blood pumping through my body felt great.

In this fourth month, I was scheduled to head up to the Banff Mountain Film Festival on behalf of Outdoor Research to partake in a panel discussion about the dangers of traveling to politically charged climates. I would be joining a tremendous panel of people for whom I had the utmost respect: Steve Swenson, Raphael Slawinski, Anik See and Tim Cope.

Honestly, I cannot remember being more excited about a festival or work trip. I wasn't obliged to talk about myself for an hour or so, which was great since I felt humbled to be around so many amazing alpinists and world travelers. Then there was me, someone who went to the mountains once, had a terrible experience (by being kidnapped in Kyrgyzstan) and vowed never to return. But that's why I was there, to add my point of view.

I picked out some clothes that I thought would hide my expanding waist line—thank goodness for puffy jackets and cold Canadian weather! I also brought the "belly band" or as I like to call it, "my fat band." This simply genius piece of elastic fabric is something that probably only pregnant women know about, but it is incredible. It's allowed me to wear my jeans for months past when I could button them. I highly recommend it for any pregnant lady wanting to wear her clothes as long as possible.
The festival was fantastic, truly an event not to miss. The combination of amazing people, films and workshops make Banff one of a kind. I cannot believe it's taken me almost two decades in this industry to finally make it up there, but I'm glad I finally did.

A few days after the festival I was feeling great. I was able to eat like my normal self, my energy was starting to come back and I was gearing up to tell friends and sponsors. I was beginning to see why some women say the actually like the second trimester.

One day before heading out to meet some friends down in the Valley, the phone rang. It was Sarah, our genetic counselor, letting me know of some more test results that came back.

It's funny to think that at age 33 I'm getting "old,” but I guess when it comes to statistics for a pregnant lady, 33 isn’t young. Our counselor let me know that the results from some of my blood work put me into an even higher risk bracket than before. She said my odds weren’t awful, just not as good as they were before.

I asked a barrage of questions, and hung up the phone in tears—clearly my hormones were taking over. I didn’t know what to make of the news. My worrying mind went spinning.

I'm a person who likes as much information as possible. Then I can at least believe I'll be best prepared for any outcome. I will religiously check the weather forecast on climbing trips, research route conditions, talk to others who have been through similar experiences, and so on. I'm not sure if it actually effects the outcome of my decision, but at least it makes me feel more comfortable and in control.

After talking with family and friends, we decided to get an amniocentesis to get a more definitive answer on some of the test results. This would leave us better prepared for the road ahead. My next few days were filled with researching amnios, their risks, any possible test results, etc. To me, dealing with this type of unknown anxiety is torture.

On the day we went to get the amnio, Randy asked me if I was nervous about the big needle they were about to put into my stomach. After having four—yes, FOUR—dye-injection MRIs in my right shoulder, I wasn't concerned at all about pain, only the health of the kiddo.

The whole procedure literally took a matter of minutes. All that build up for a matter of minutes! I suppose it's like any climbing project —you train for it, and think about it for months or years and then finally it’s over in a minute.

Then came the hardest part for me: resting for three days. It's not like I was training for the Olympics beforehand, but I was literally on bedrest. If I had any symptoms of leaking, bleeding or cramping, then I would need to rest longer. I experienced awful cramps, to the point that I wanted to go to the hospital. Over these few days after the amnio, anytime I was up for longer than it took to walk to the bathroom and back, my cramps were terrible. I stayed in bed for 72 hours—some of the hardest medicine for any active person to swallow.

I passed the time watching terrible shows and movies, learning the cracks and crevices of my ceiling better than I ever cared to and just being bored out of my mind. I thought about the health of the baby. The risk. I kept replaying that phone call over and over in my head about being at a higher risk. After three long, painful days, the cramps subsided and I eased back into my new normal life. I could make my own meals again, go on short walks, and after a week I was out and about.

Ten days after the amnio, we were sitting in the parking lot of Camp 4 about to head up to the house. The phone rang. It was Sarah, our genetic counselor.

"Beth, I've got really great news!” she said. "Everything came back normal. Congratulations!" Literally I felt a massive weight lift off of me. It was wonderful. A healthy baby—and a boy! Smiles plastered our faces. Relief took over, I just had to take care of myself and try to enjoy the second trimester, when I actually had energy and an appetite.

It's interesting for me to look back on this time. I'm now in my third trimester and have just been plugging along and enjoying the ride. But at the point of the amnio, we were still keeping the news somewhat quiet, the pregnancy felt foreign (I hadn't felt the baby moving yet), and all the tests seemed overwhelming.

This month I also told all of my sponsors, which felt great. With each subsequent phone call and conversation, everyone was incredibly excited and supportive. Some wanted me to blog about it, some wanted to post it right away. It felt great to have the stigma and worry that I attached to being a pregnant athlete erased. Two massive weights had been lifted this month. Honestly, the biggest one of them all was telling people, it felt so great not to be alone with it anymore.