Climbing Through Pregnancy: Listening To Your Body 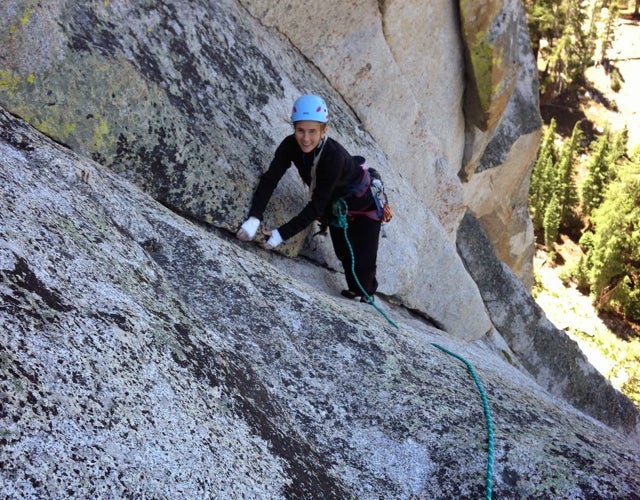 This post first appeared on Beth Rodden's blog. For more info, check out her athlete page.

It's very interesting to me to look back on the first couple months and see how hard it was for me, what a different mind set I was in with the unknowns and worries, coupled with the sickness and physical changes. I'm glad that I documented this when I was going through it, even though it was a difficult space to be in.

We found out the day after Max died. The first pregnancy test read positive. Then so did the second. One of the saddest times of my life was crashing head first into what was supposed to be one of the happiest. But it wasn’t. Looking at that blue indicator strip, it was hard to feel any joy. My constant companion had left me the day before, and I was still reeling—lost and aimless.

Emotionally it was so hard not to tell people. One of my good friends was also pregnant (about 3 months ahead of me) and I wanted to talk to her about it, but then my nervous, worried self took over. What if I miscarried? And she was having a healthy pregnancy and baby? Which would be harder to deal with? Being such a private person, I opted to not say much, but I almost spilled the news a few times.

The first month for me was a rough one. In the wake of Max’s death, I was still trying to regain some sort of normality in my life. I wanted to keep climbing, running and exercising as long as I could. I was essentially doing anything to delay the inevitable and profound changes I knew were about to take place. I wanted to try and maintain a sense of normal.

That worked really well for a whopping two weeks. Then I started to notice some changes.

I made a couple of phone calls to double check about my body and maintain health without compromising anything with the baby. Even though I am a stubborn, driven athlete, my first concern and line of thought was always for the health of the baby. First was to my amazing hand therapist Brenda in Colorado, who has been through thick and thin with the dozens of finger injuries and shoulder injuries I've sustained over the years. She was the first one to tell me almost a decade ago that I would have to be extremely careful if I ever got pregnant because of my already unusually loose joints. She told me to be super careful and just listen to my body because of the hormone Relaxin. Women's bodies loosen and stretch over their pregnancy to make room for the baby in their belly and eventual birth. The flood of extra loosening hormones in my body, in addition to the Relaxin, would only make my already loose joints even worse.

The second call was to my primary care physician. I had heard from some friends not to get my heart rate above 140, which to me felt like practically walking, as I'm sure it does for a lot of athletes. I wanted to make sure that this was accurate and not outdated. By all means if that's what I needed to do, then I would absolutely stay below 140. She told me, again, to listen to my body. What did pushing it to me feel like? She said to stay below that level and “No wind sprints or interval training,” she said, laughing. My OB also cited a new study that said the heart rate rule was very outdated.

It’s hard to know what to trust when studies change by the month, and everyone has an opinion about what is dangerous, and what is safe and healthy. This blog is no different. I’m the furthest thing from a doctor, so if your doctor says something different, please listen to him or her.

I gathered as much information as I could from the trusted professionals around me and from the few blogs and information I could find from other mom climbers. From about week two on, I started taking it quite easy with physical activities. At first I jogged at an easy pace. After a few weeks my breasts got so big that it was extremely uncomfortable to run, so I just switched to hiking. Which eventually turned into slow walks.

Occasionally I lifted easy weights: only weights that I could easily do more than 10 reps with. I did this during times that my joints felt too loose to climb—learning, again, to try to listen to my body.

With climbing, I took it easy, climbing up to 5.10+ on top rope. I stuck to my normal climbing schedule climbing every other day, but avoided anything that would put a huge strain on my joints—off-widths, overhanging finger cracks, campusing, etc. I noticed that when warming up my elbows would pop, something that has never happened to me in my almost 20 years of climbing. I could definitely tell that my joints were already looser, so I was especially careful to avoid anything tweaky. I wasn’t concerned about sending hard, I mainly wanted to keep movement and flow up. To me, easy climbing feels like yoga, something especially good for my body, so I wanted to just continue to keep my body stretched and limber. I continued my shoulder exercises religiously, and anything that would keep tension in my joints and ligaments.

A friend of mine had her shoulder pop out of its socket while sleeping on her side during the last few months of her pregnancy. I desperately wanted to keep my troublesome shoulders as healthy as possible and avoid relapsing on all the rehab I’ve been doing over the last few years.

By this time I had shared the news about the pregnancy with a few family members and my closest friends, which felt like an amazing outlet to have. I think if it just had been me and Randy, I would have combusted with questions, excitement, worry, and emotion.

The first two weeks of being pregnant were a honeymoon. I was under the guise that I was one of the lucky women who avoided morning sickness, but right around week two it hit me; morning sickness. I'm not even sure why they call it "morning sickness" as it lasts all day! Eating healthy is important to me, and I love having a variety of fruits, vegetables and pasture-raised meats and eggs. But I couldn't even cook or think of cooking for the next three months, nor could I even stand having Randy cook if I were in the house. Cooking good food is a huge passion of mine, but the smells and thought of preparing food would send me over the edge. We took to eating out, deciding where to eat at the very last minute depending on what I thought I could stomach. I even invested in "Sea Bands" and acupuncture to see if that helped with the nausea.

At 6 weeks, my nausea was overtaken by gnarly diarrhea. I thought this was perhaps just another lovely side effect of being pregnant, but it turned out I had gotten E. Coli from a salad at a restaurant. With a visit to the ER and about two weeks of recovery, I actually lost about eight pounds! Not a good thing when while pregnant.

Luckily, after my E. Coli cleared up, one of the only things that appealed to me was burritos - a far cry from the bland Saltines that I'd taken to because of morning sickness. I figured if I craved them then I might as well go for it. I've had a love/hate relationship with burritos over the years, at times eating them for each of my three meals per day while living on the road. Fortunately, in the Bay Area there are a plethora of really good burrito shops in pregnant walking distance. One would think that with a half-dozen Mexican restaurants nearby, I couldn't become a "regular" at ALL of them, but by the end of the first month the staff at each restaurant knew me and my order perfectly.

These first six weeks were incredibly tough. The pain of losing Max still pulsed through my body daily. I was nervous about my career and what these changes would bring. I was worried telling people the news. I was worried about miscarrying. I was laid up with E. Coli. I wanted to make sure I was doing everything possible to have a healthy baby.

Above all, because I was keeping the news so close to home, I felt very much alone. Though worried, I was also getting excited about the new addition to our family. We started thinking about names. We started talking about trips and places we would want to take the baby. We day-dreamed about our first two years (when kids fly free), envisioning trips to France, Norway, Spain and Japan. Road trips to Squamish, City of Rocks, and Colorado. I started imagining hiking in the Sierras the next summer with the little one, showing them all the amazing places that we love and adore. I remember the joy I felt just walking into a meadow with Max and laying down in the tall grasses. I found myself smiling. I couldn't wait to do all of that with our kiddo.