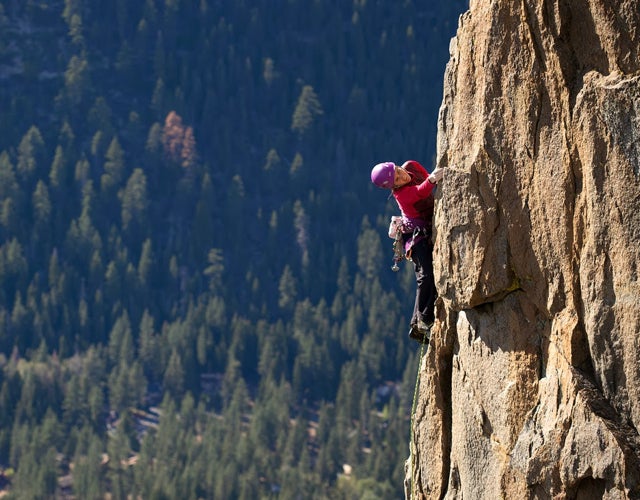 As I crept into the second month I started to think about being pregnant a lot more.  My harness had to be let out a bit, but other than that, I thought I was doing a good job of hiding my belly. Though most people probably didn’t notice, it felt really weird to be getting rounder. Normally in the past if I got rounder, it was because I indulged too much on my favorite food or treat, or laid on the couch too often :) But now, this was normal. This was accepted and what I was supposed to be doing. It was weird, but also reassuring and a bit relieving. Being pregnant was actually alleviating a lot of the weird neuroses that come with being a professional athlete. It was almost like a hall pass, or breathing a sigh of relief.

During this time, Corey Rich, one of my closest friends and an extremely talented photographer, approached me about an opportunity to do a photo shoot for Nikon, a company Corey represents as one of their elite Nikon USA Ambassadors. The photos would be used for a Nikon Experience micro site; check out the amazing final pictures here: http://experience.nikonusa.com/.

This wasn’t just a great opportunity to make some cool creative pictures with one of my best friends, but it was also exciting to find myself still working professionally while pregnant. Further, in Corey, and his wife, Marina, I actually found two more people to confide in and share the news with. Corey and Marina had just had their first child, the adorable then three-month-old baby girl, Leila. I knew he’d understand. They were ecstatic and so happy for us, it was wonderful to be able to share in our own tiny little joy that was growing.

We climbers are proudly counter culture. We aren't typically people who follow the norm: go to college, graduate, get 9 to 5 careers, marry and have kids by the time we are 30. A lot of us live out of vans, never set foot on a college campus and think that marriage is for the birds. I remember a moment last winter when we told one of our climbing friends that another climber was pregnant. His instinctual response was “Oh, shit," as if her life were over. And to be fair to him, it probably seemed as if her life were over.

That reaction stuck with me—and made me wonder if that's how most climbers felt. But in the interim, I actually watched many of our friends get pregnant and have kids. In all cases, life was never “over,” and in fact it only seemed to be enriched. And with more and more climbing families having kids, it seems that perhaps our counter culture is shifting a bit. Kids are now a normal thing at crags and in the boulders.

Before the Nikon shoot, I told Corey the news. He was extremely happy for me, and echoed the same encouraging sentiments my friend told me at the Trade Show.

“This is a huge opportunity, Beth,” he said. “Being a dad has been the best thing that’s happened to me. You are just moving further into your roll as a role model for all the young girls and women out there. Who cares if you can't climb 5.14 for a few months or a year? This is life, this is what people want to know about."

Clearly he recognized my insecurities and said exactly the right thing.

The week came for the photo shoot with Corey and Nikon and it was a blast. For anyone who has done a photo shoot with Corey, you know that it's a lot of work. There is no catered food truck, no assistant fluffing your hair. Instead, days begin well before dawn and end with hikes out by headlamp in the dark, snacking on bars and fruit in between. For this particular shoot, my alarm went off at 4 a.m. each day and my head hit the pillow around 11 p.m. each night.

In my normal non-pregnant state, a schedule like this would be no problem. I’ve always been a charger, someone who can go for a long time with the best of them. Climbing, hiking, running, whatever it takes to get the job done.

However, it was hard to hide everything from the good folks at Nikon. At the shoot there were probably 10 to 15 people from Nikon USA, which is headquartered New York. As we hiked from location to location, I carried a normal pack but brought up the extreme rear of the group. I'm sure these New York creative directors were thinking, “Wow, this professional athlete sure is weak!”

I'd read about round ligament pain during pregnancy. These ligaments attach to your pelvis, and stretch and loosen during pregnancy preparing for birth. Unfortunately, they can also be quite painful while exercising. The pain while hiking uphill during the photo shoot was bordering on unbearable and a heavy pack didn't help the situation. I felt like a sloth crawling behind racing horses. And even with my unbelievably slow state, I was gasping for air like I was climbing a peak in the Himalayas. Clearly my body was already going through changes in the first trimester - decreased lung capacity, stretching of the ligaments, etc. Luckily Corey knew my situation and was able to give me breaks when needed.

We made some extremely beautiful pictures and it felt great to be out climbing during the best season: fall. Cool air, perfect temps, good weather, good friends and I still wasn’t too huge!

Even though I was constantly sick, I continued climbing throughout this second month. I learned that I felt sick whether I laid in bed or was out doing something, so I decided it would be best to be outside climbing or hiking. I still climbed well below my limit, mainly on top rope, and on primarily less than vertical terrain. I found that climbing on a steep overhang was harder on my loose shoulders and joints. 5.9 was about the max that I tried. But luckily Yosemite and Tuolumne are stacked with the best 5.9’s in the world. During this second month, our little kiddo summited Fairview Dome and Manure Pile Buttress a few of times—again all via climbs that to me were very well below my limit. I still wore a normal harness, but towards the end of the month I started thinking about a full body harness. My joints didn't feel worse than the first month, but I still tried to make sure that I didn't climb anything too "tweaky." If I climbed in my garage, it was just traversing along the base of the wall in case a hold spun or I slipped.

The constant nausea and fatigue—alongside a “healthy” diet of Saltine crackers, Wheat Thins and white pasta—became part of my new "normal." It was hilarious for me—this person who was so passionate about good, quality, fresh, local food—to look into my fridge and cupboard and see only shades of white and beige. I reminisced about my old fridge of greens, reds, oranges, and how excited I got every time I opened it. Now my enthusiasm for eating barely existed.

As month two came to a close, I was crossing my fingers that I would fall into the lucky group of women whose nausea subsided after the third month. My excitement about this pregnancy was starting to take over, but it still seemed so foreign. Was I getting prematurely attached? Was the little baby growing? Was it all okay? I didn't want to get my hopes up, just to have them crushed.

All that changed when Randy and I went to get our first ultrasound. There on the fuzzy black screen in front of us was a little heart beating. I felt something toward this baby, and for the first time it wasn’t nausea. It was suddenly very real … and very exciting.