Climbing Through Pregnancy: Through The Third Trimester 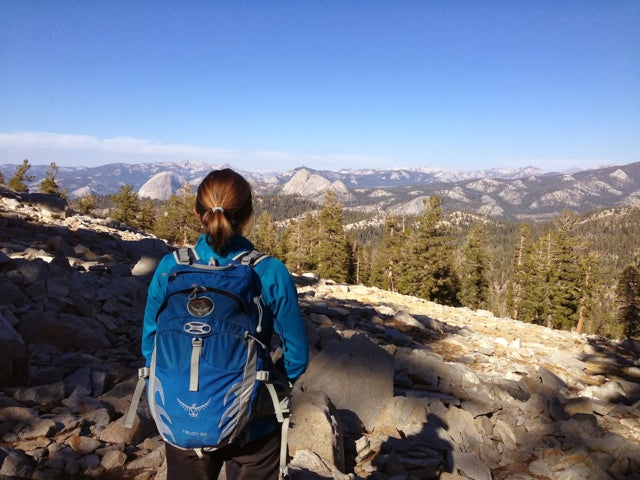 This post originally appeared on Beth Rodden's blog. For more info, follow along on her athlete page.

Most people said the nausea would likely be gone by the end of the first trimester. But there was always a chance the I’d be one of those unlucky women who were sick throughout their pregnancy. As the end of the first trimester approached, I felt a mix of hope and dread. Luckily, as my third month came to a end, so did my daily bouts of sickness. It took about two weeks to fully fade out, but then it was gone. Yipee skipee, no more nausea! The relief of not feeling nauseas everyday was incredible. It felt great to have energy again and not feel continuously sick.

The first trimester is an important mile marker on the road to having a baby for many reasons. A lot has already taken place developmentally. And all the biggest changes are about to kick into high gear.

In case you haven’t already picked it up from reading my past posts, change causes me to worry. Yep … it’s true. I don't know where I get it from, but I know when it started: after being kidnapped in Kyrgyzstan. I started to notice myself thinking in terms of worst-case scenarios more and more. Anytime someone says “What are the odds of [insert awful outcome] happening?” I think to myself, “Actually, probably pretty darn good!”

Around 10 weeks, we had the option of getting a handful of blood tests done. Because we still weren’t telling people about the pregnancy yet, I didn’t ask around if these tests were a good idea. And since Randy has great health insurance, there were no extra costs associated with the tests, so we decided to just go for it. Some of my blood tests came back slightly higher or lower than normal, placing me in a higher risk bracket than my age. The doctor said it was nothing to worry about at this time, but she obviously didn’t know who she was talking to! I know that these tests are meant to help and reassure pregnant women. But for a worrier like me, I think having something concrete like numbers on paper was a double-edged sword.

I went to Internet message boards to see what other women did with similar information. I would highly and strongly recommend NOT doing this! Again, I know these people mean well, but there is a lot of alarmist and not necessarily helpful or educated information out there. I think it's best to talk to friends that have been through similar things. But because I was still being so closed about the pregnancy, I just had the random opinions and experiences of strangers swirling through my worrying head.

Around this time, one of my finger injuries started acting up. I'm not sure if it's from climbing while pregnant, climbing while the relaxin hormone was pulsing through my body, or if it had nothing to do with the pregnancy and it was just my chronic finger injury. Perhaps it was all three. Regardless I climbed a lot less - probably only twice the whole month. This was no time to push through an injury. It wasn't like I was close to sending a project. Instead I was looking at another six months of being pregnant and several more to recover before I could even think about climbing harder than 5.9 again.

Honestly it felt weird to wake up each morning and not plan out a climbing day—something I’ve been doing almost every day for the past  17 years. Despite all of my injuries, climbing has remained so much a part of my daily routine— like eating breakfast or going for a walk. Climbing is something I do just to exercise and feel good about myself, whether that be a 5.14 project when I’m feeling strong and fit, or a 5.9 hand crack or easy slab route when my finger or shoulder injuries are raging. For almost two decades, climbing has been a major part of each and every day. It felt weird to not have it be there, a huge void in my day. Yet, another part of me felt relieved, as if a weight had been lifted. I could take this time to focus on other things, and enjoy the extra time in my day.

I started lifting weights and walking religiously. It felt good to move actively and it took my mind off of the last bouts of nausea. I prayed that the second trimester would bring back my old appetite, and that I would somehow override my heightened worrying and crazy hormones to attain a sense of mental clarity.

In climbing projects, during that long, often frustrating redpointing process, we have to find ways to encourage ourselves even though the ultimate success of a clipping the chains is months away. So what if you didn’t send that day? You stuck the crux move from the ground. Or you figured out some new beta. Or you felt stronger on the top of the route.

In climbing those incremental achievements and steps forward are really what add up and lead to the ultimate success. Now, what I’d learned form 17 years of climbing was coming back to help me in pregnancy. I realized I had “ticked” the tough first trimester. I was a long way from sending, but I stepped back and decided that instead of being discouraged about how far I’d yet have to go, I felt happy by how far I’d already come.