Climbing With Kids: Beth Rodden Gets Back On The Rock In Yosemite 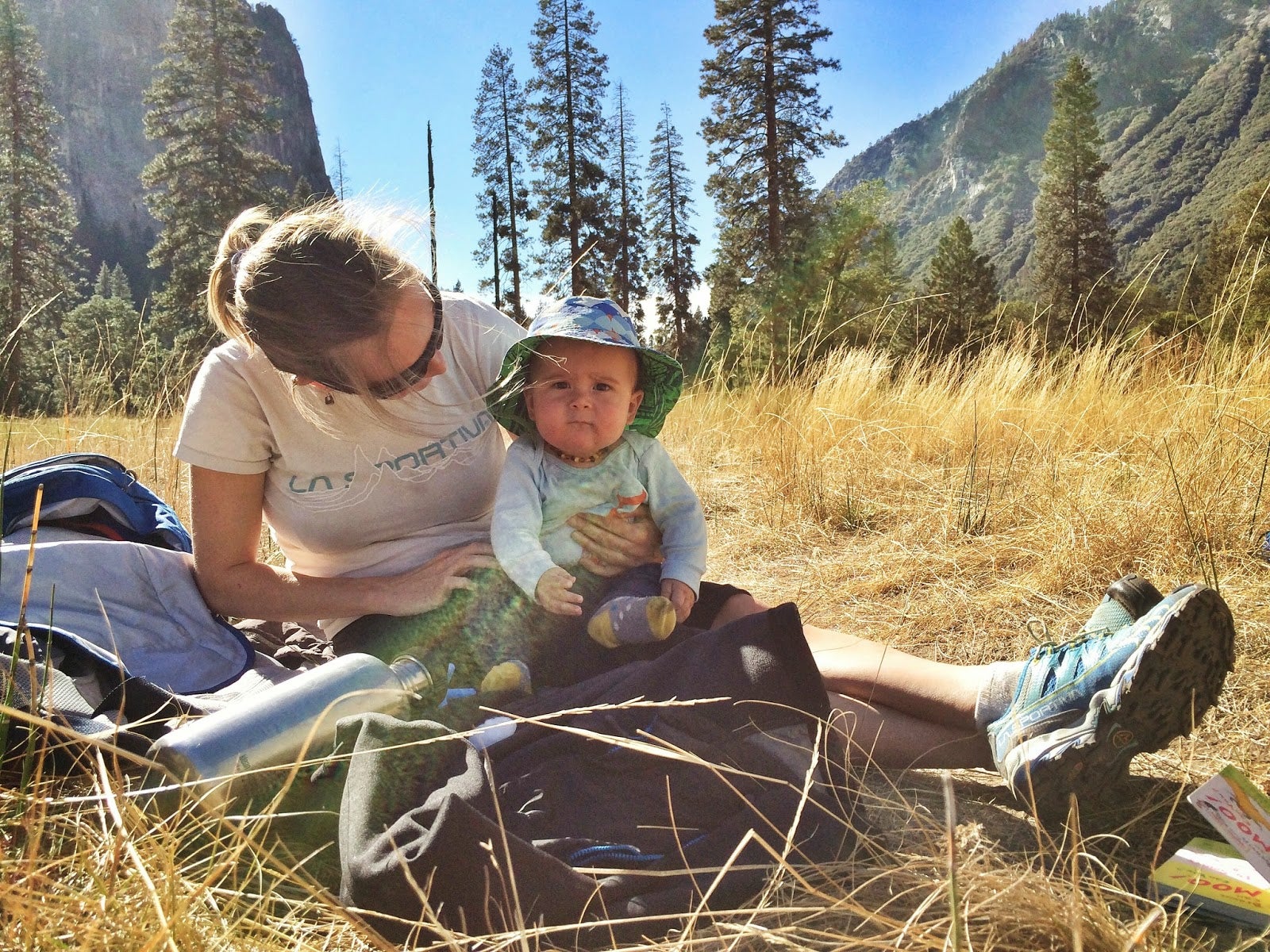 When you’re climbing all the time, and climbing really well, it can feel easy to get hard routes done. You can just throw yourself into a project and work on it exclusively. There are no other distractions. Nothing else matters.

Balance is what’s actually hard. That’s something I’ve really begun to see and appreciate in motherhood. When I had all the time and energy in the world, success was omnipresent. But how would I do when I had to handle the needs of many others, including my own? I've been finding that is the real crux in life now.

With all my injuries over the past few years, I’ve had to learn to be patient and allow my body time to heal. I’ve accepted that I’m not going to be climbing at the highest level all the time. But climbing hard is only part of the equation—simply being out in the areas I love is also what nourishes my soul. With my excruciatingly slow postpartum recovery, it had been over four months since I’d been in my favorite place in the world: Yosemite. There were many things at home that demanded my attention and energy, but I felt a sense that I needed to nourish this part of who I am. I made the decision, with much hesitation and worry, to spend the entire fall in Yosemite with Theo.

The plan was for Randy to join us on the weekends, but otherwise I’d be alone with Theo. I had never really had Theo for a full 24 hours by myself, let alone a full week. I had normally counted on Randy to help me in the mornings and evenings, and my parents would graciously help for a day each week. But if I wanted to be in Yosemite, four hours away from family, I would be self-supported. 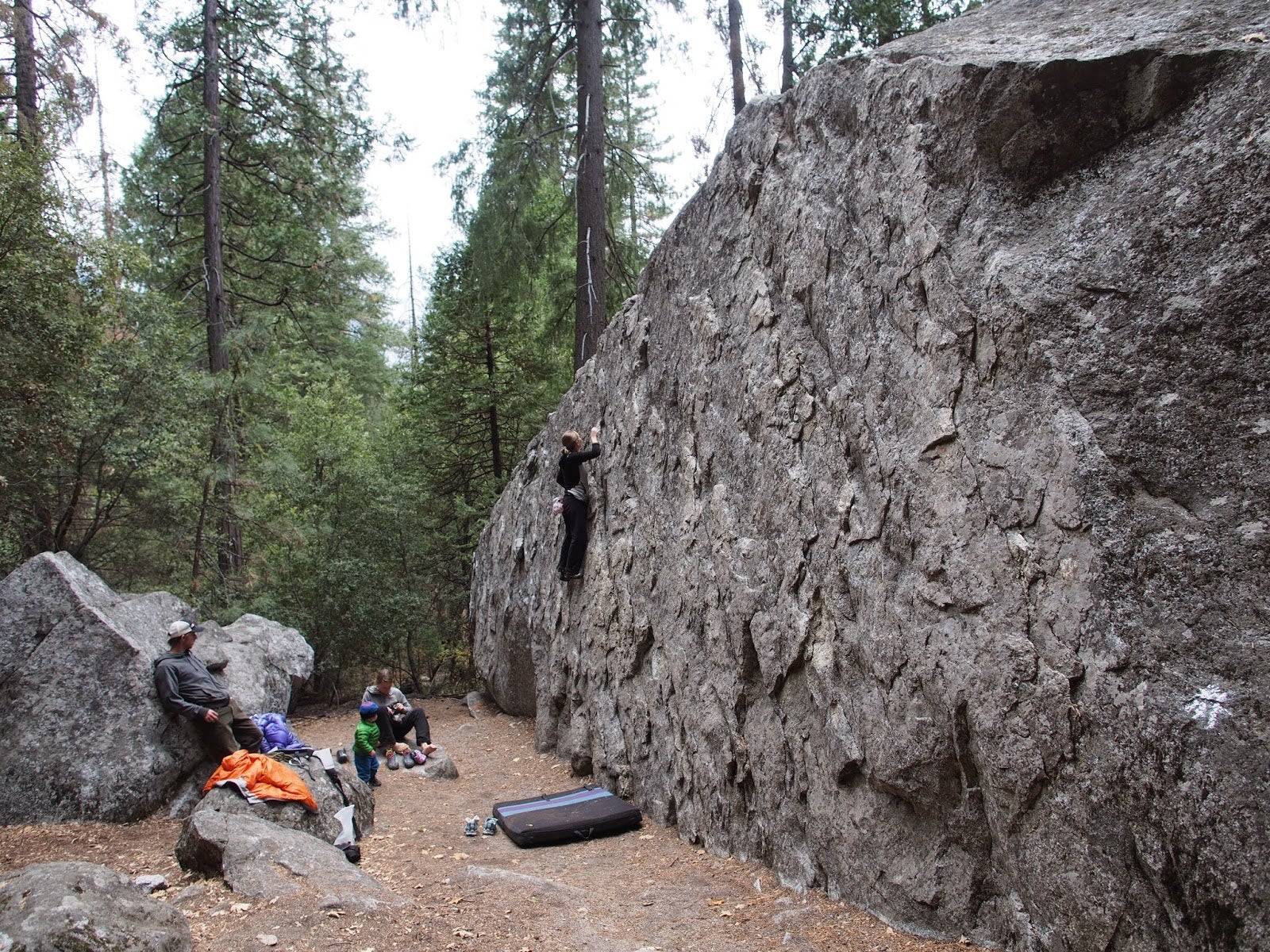 I ran through all the risks. The nearest hospital was over an hour away. What if my body didn’t hold up? My cystocele was improving, but the piercing pain and pressure inside was still all too familiar. What if I got hammered by mastitis again? I couldn’t fathom having to care for a child while having a 103-degree fever.

But I figured it was worth a shot. This is part of that whole balance thing. You have to learn to also care for yourself, even when your entire world is all about caring for this little baby. I knew I needed to be in a place that nourishes my soul, even if actual rock climbing wasn’t the main focus. I just love being in Yosemite. And, with Theo’s psyche (or lack thereof) to sit for any length of time in a car, it made sense to spend an extended period of time in one place rather than commute back and forth from the Bay Area to the Valley.

At the time, around October, I was just recovering from my fourth, and worst, bout of mastitis and trying to get a handle on breastfeeding. My body was still feeling wrecked, but I was slowly inching my way back to feeling like a normal human. Being a normal athlete, however, still felt light years away.

It had been so long since I felt “normal” that I wasn’t sure how each day would unfold. I figured the best place to start was with my old routine, minus the hard climbing. Each day, Theo and I cruised the Valley Loop Trail, stopping by the boulders and El Cap meadow. My cystocele was still a noticeable and saggy feeling, which definitely limited me from doing too much strenuous hiking with Theo. But even just doing those simple walks beneath the towering granite walls was invigorating. Each day, I felt like I was healing, if slowly.

It was also a nice surprise to spend time with other kids and moms in Yosemite this fall. Who knew that Yosemite would be a great place to socialize for families? Becca and Fitz Caldwell were around while Tommy and Kevin were up on the Dawn Wall. Zoe Hart and her two kiddos, Mathias and Mieka, were out from Chamonix for a week. As well as the many familiar faces and friends out from the Bay Area each weekend. It was great for both me and Theo to do all this socializing and build up our community and network in the mountains. I started to realize the importance of a community and support through my little man. Theo loves other people and kids. It was great for him to interact, and it was lifesaving for me to be able to pass Theo off to Becca for a moment or two so I could catch my breath. 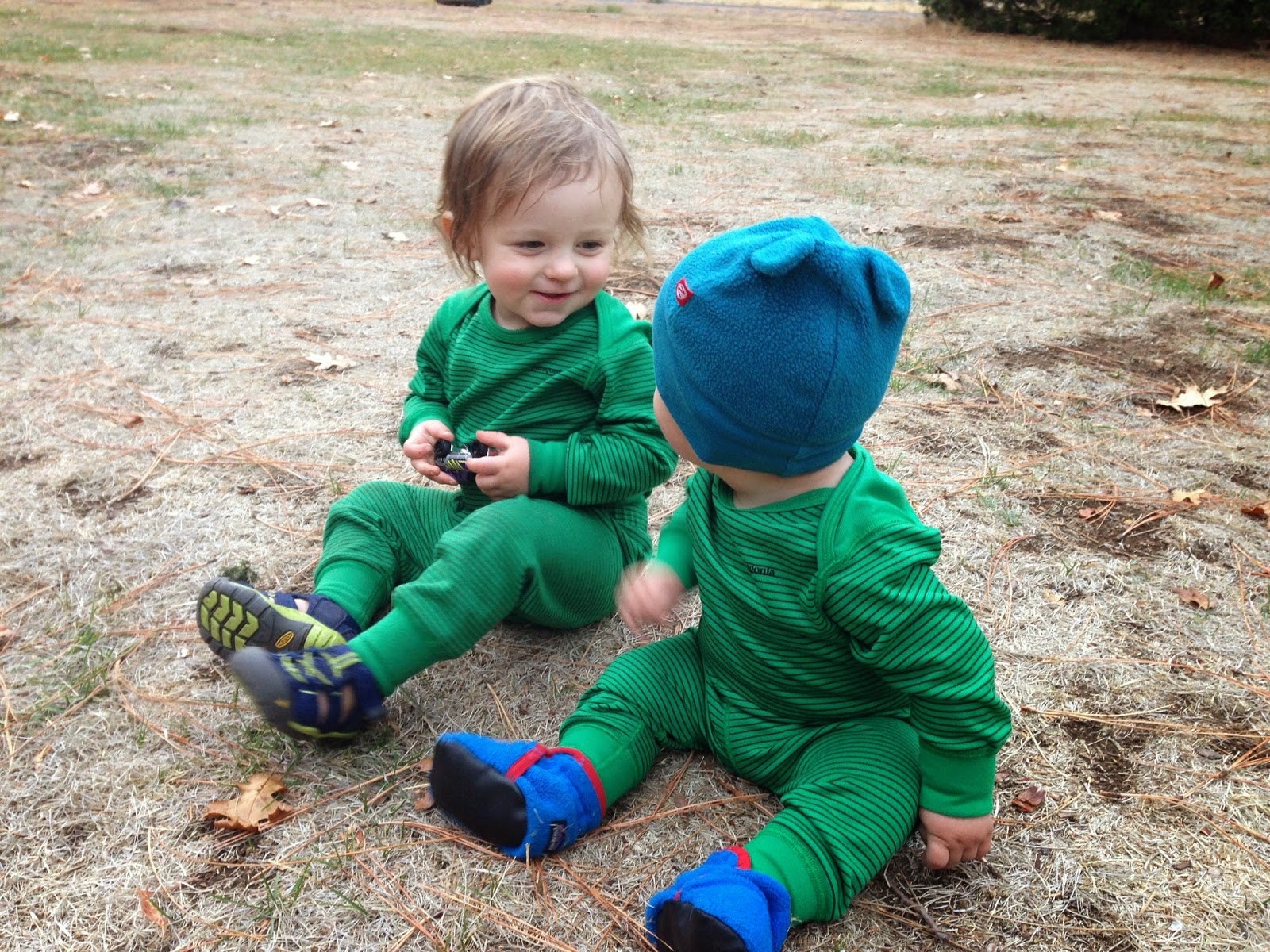 By Friday evening, when Randy showed up, I sighed in relief and found myself marveling in awe over how single moms do it. I have so much respect for all you single moms out there. I’m totally certain you are a different breed of human!

For the month of November, Randy arranged to work in Yosemite part time, and this allowed me to actually strap on my climbing shoes a few times and visit my old stomping grounds. My abs were still split—I still had a three-finger gap on the middle muscles—though they were healing, just at my usual excruciatingly slow pace. I tried bouldering at first on the Presidential Boulder, the easiest problems in the entire Valley. 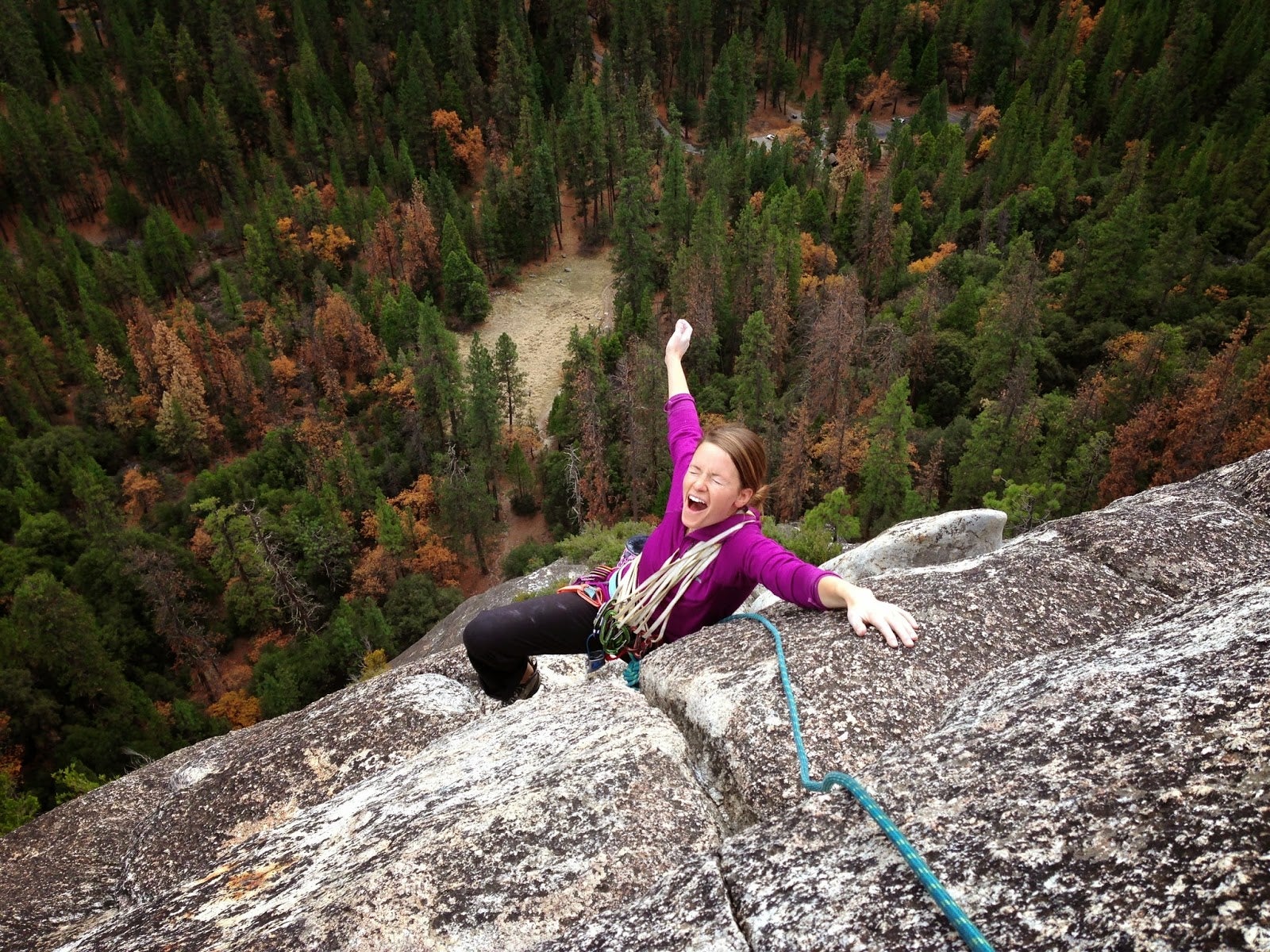 After a few weeks on my warm up circuit, I felt like I was getting my sea legs beneath me again. My fingers and body were acclimating to climbing. The slight shake that echoed through my body slowly dissipated with each boulder problem. I finally felt ready to take the sharp end again. It had been over a year since I’d roped up for a lead. Randy offered to watch Fitz and Theo, giving us moms the chance to run up a lap on After 6. That’s about as easy as climbing gets, but at this point, grades have become irrelevant. The joy for me is found in experiencing that old routine of of placing cams on my harness and getting to hear once again that familiar sound of gear clanking as you pivot your waist. I felt like my old self again, free from health problems and being able to spend all day in the mountains just moving upward. So simple and so fulfilling.

After 6 only took us an hour, but it was one of the best hours of the fall. By the time we reached the ground, I felt I had re-charged the battery of my soul. I felt a moment in which all these things that are important to me—being a mom, a wife, a friend and a climber—had achieved a moment, however fleeting, of balance.