Close Encounters Of The Ursine Kind 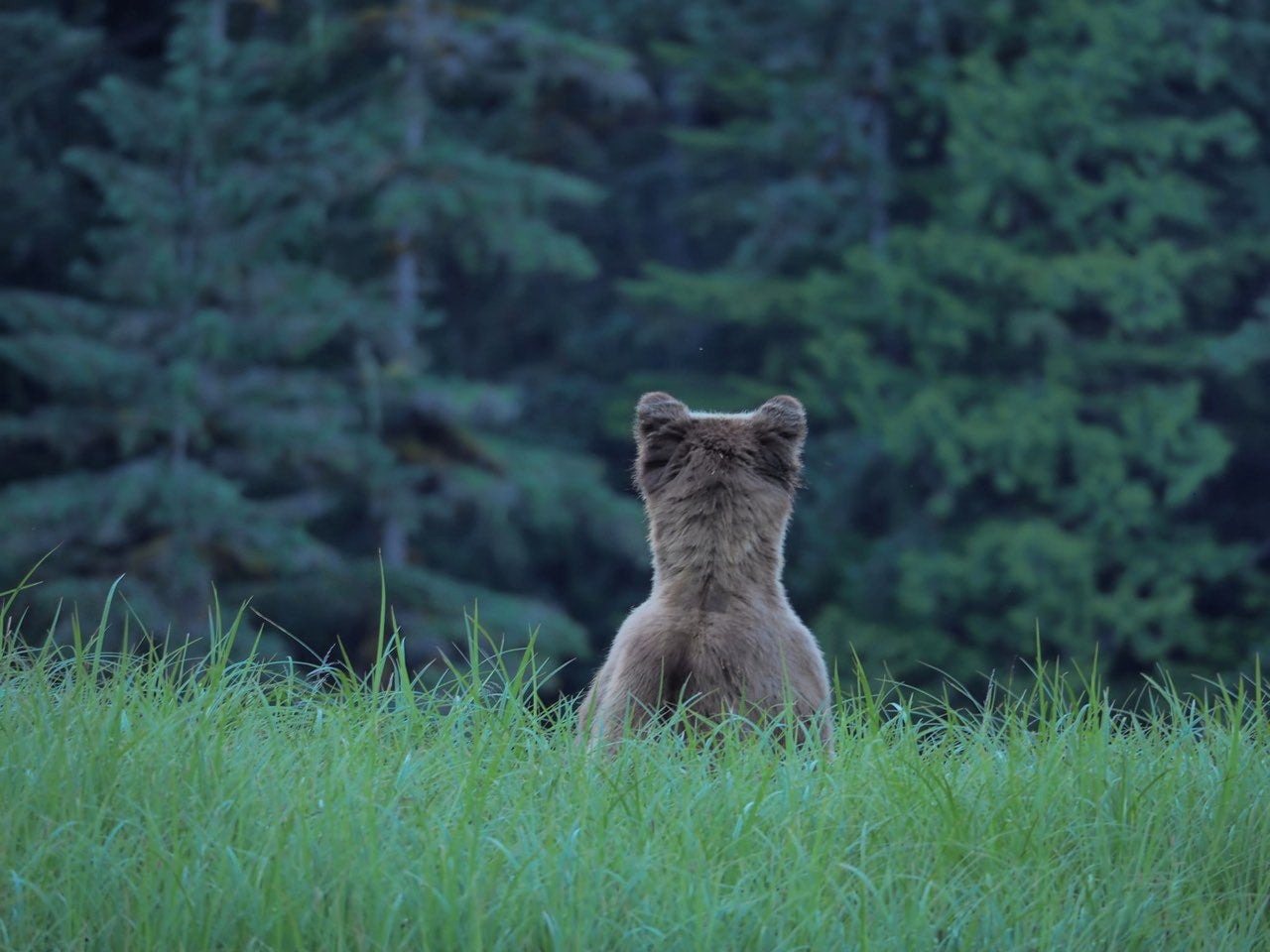 It’s hard to imagine a more idyllic scene than where my friends and I were setting up camp: along a gently trickling Snake River tributary, with a thick curtain of willows for privacy from our neighbors—if we had any. Over the ridge above us lay the iconic Tetons. It had been a long day—beginning with an alpine start to attempt the Middle Teton and ending early when conditions proved sportier than expected. The sky was softening to dusk and we were pitching tents, starting a fire and cracking open cheap beers—when a blood-curdling scream shattered the peaceful chatter of the mountain bluebirds. A crash came from the willows, and my friend Pat, who’d wandered off for a—shall we say—constitutional, emerged from the bushes and staggered back to camp with his pants around his ankles.

As he buttoned his pants and breathlessly tried to explain himself, the bushes across the stream rustled—a telltale sign of a big grizzly bear lumbering away from our camp. Pat and the bear had surprised one another as each went about their business, and Pat had been—literally—caught with his pants down.

Once it was clear everything was OK, Pat’s narrative of the encounter (accompanied by a wild-eyed reenactment of the moment he realized he was not alone in his would-be bathroom), was met with peals of laughter. We tease Pat to this day about the time he was literally scared s***less by a bear—what are friends for, after all?—but it’s sobering to think about how that incident could have gone differently.

My friends and I made some mistakes at that campsite. Exhausted after our long day in the mountains, we weren’t paying much attention to our surroundings, even as dusk—primetime for bears—approached. The stream was a nice aesthetic touch, but the sound and the surrounding willows meant it was not only a textbook bear hangout, but also that we couldn’t necessarily see or hear an approaching critter, especially if we happened to be squatting and pants-less.

I’ve learned a lot about traveling in bear country in the years since that trip to the Tetons. Some of it I’ve read or been told, but a lot of it I’ve learned by doing something wrong and realizing later that I’m only still around because I happened to get very lucky. Thanks to my own Darwin Award-style moments, I know a few things about what not to do in bear country. Please feel free to learn from my mistakes. 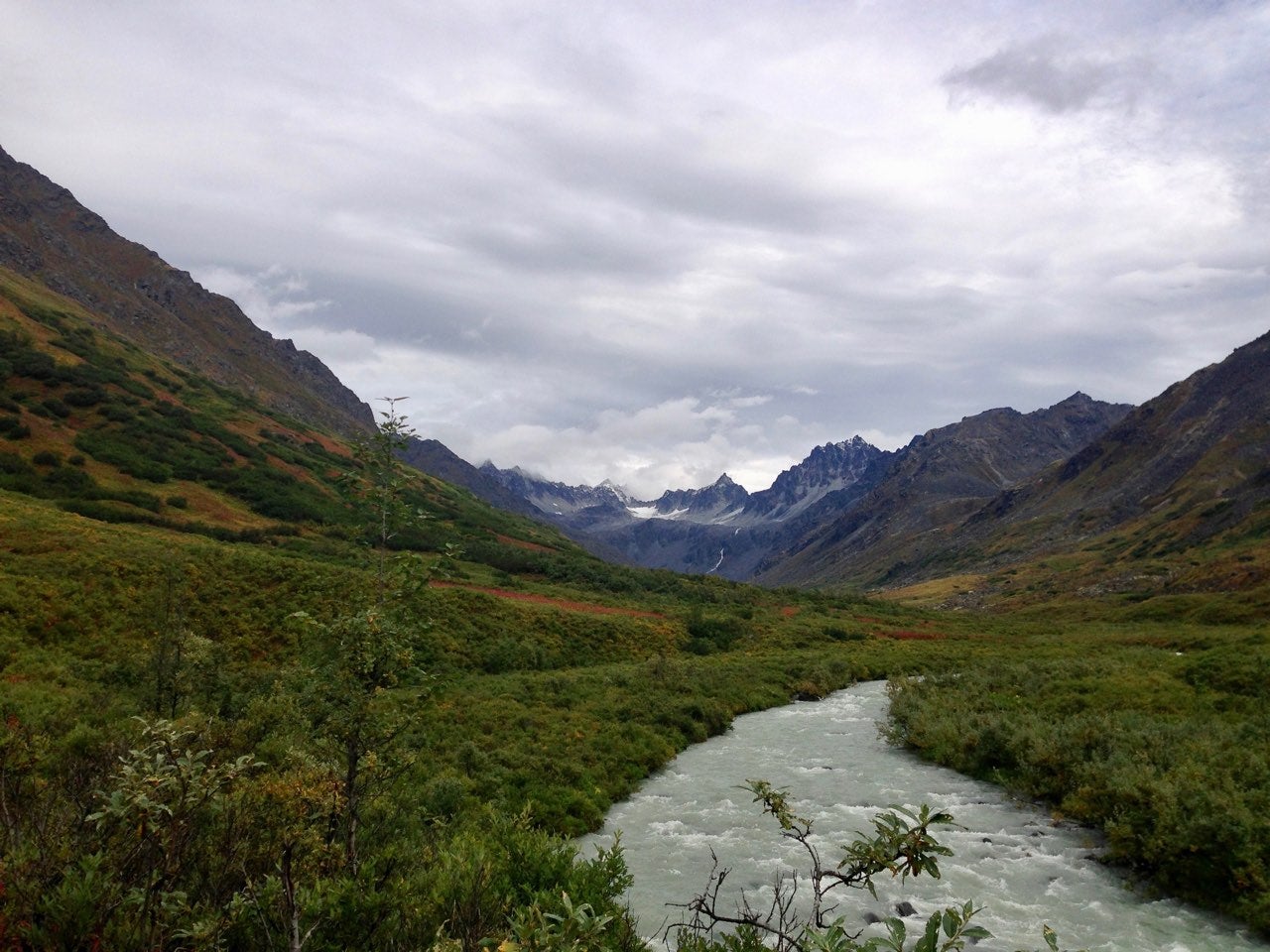 Years ago, when I had relatively little outdoor experience, I was camped with a friend below an alpine lake in Colorado’s Mosquito Range. Our plan was to get up before dawn to summit a couple of fourteeners. We’d been instructed to bring bear spray, and I was so nervous about encountering charismatic megafauna that I took it with me when I got up to make coffee around 4 a.m., when it was still dark enough to see stars.

I was so jumpy, in fact, that when a dog barked two campsites away, I snatched the deterrent off the picnic table and aimed the sprayer at the offending sound—realizing in that moment that I had no idea how to actually deploy bear spray.

I’m fortunate to have realized this when I was in danger only of being spooked, rather than attacked by a black bear (which is basically a large raccoon, albeit more afraid of humans). Oddly, it’s also lucky that, in my panicked state, I hadn’t yet learned to operate the spray, or someone’s dog may have had a pretty rough morning. In general, when I’m in the backcountry, I try to stop and take a breath before making any big decisions—a category that includes deploying mace.

My friend Pat was tired and, of course, focused on a more pressing need during his Teton grizzly encounter. But he violated a piece of conventional bear-country wisdom: If you must go into the willows alone, make some noise to warn bears in the area that there’s a human in their midst.

I’m guilty of forgetting this, too. Once, as I hiked out to a crag to climb off the Seward Highway in Alaska, the conversation lulled and I spaced out, ending up about thirty feet in front of my partner. We hiked along in silence for about five minutes before I marched around the corner and surprised a big grizzly sow, whose cub was a few feet off the trail.

She started to charge almost immediately. I remembered, then, the first rule of bear country: Make some noise. I made myself as big as possible, waving my arms and hollering for my partner, and the sow scampered into the woods. That—and the fact that I maybe peed a little—was enough to remind me, ever since, to talk or sing whenever I’m in grizzly territory. I do not sing well; I believe this to be additional bear deterrent, and anyone who complains about it should really be thanking me. 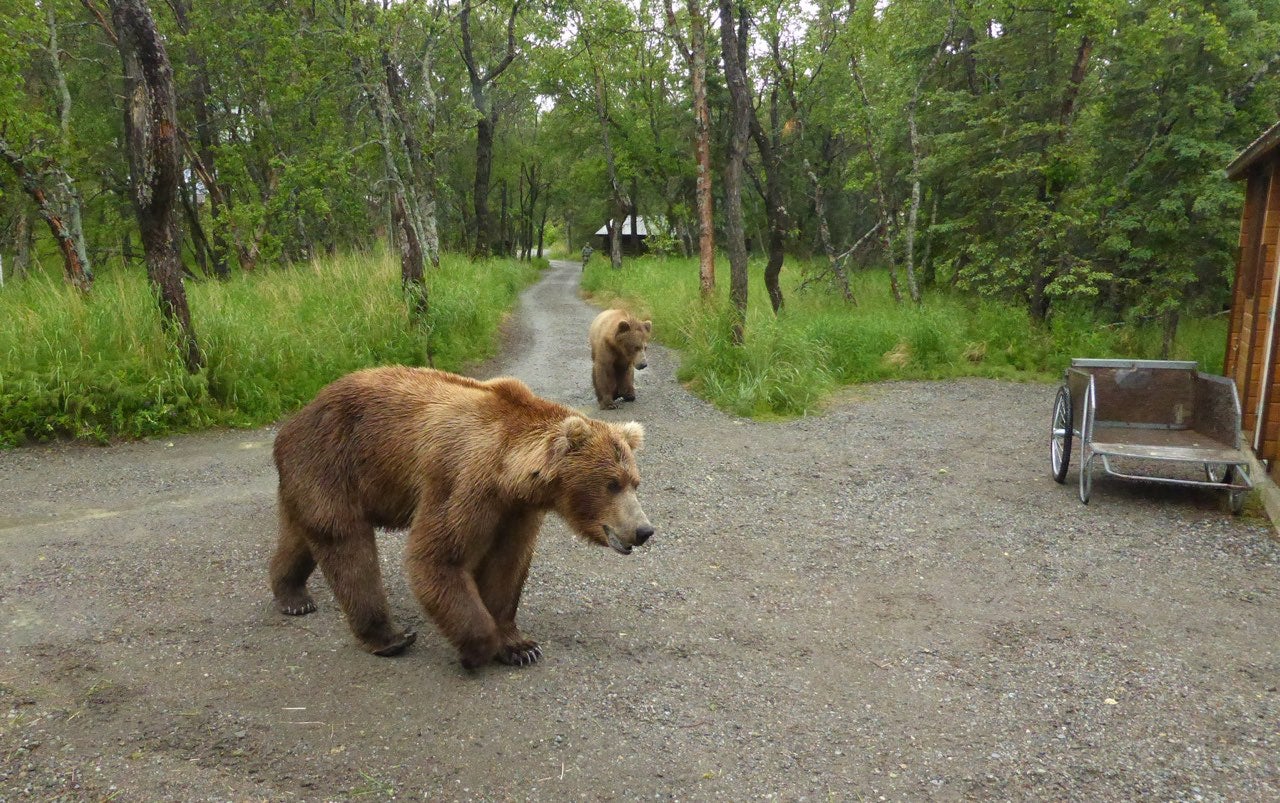 Don’t get lazy about your "smellies."

I know the rules about camping in grizzly country: Don’t keep food or toiletries (“smellies”) in your tent; cook downwind from your campsite. I use a bear can and check my pockets for wrappers before bed. But I wasn’t always so conscientious.

At the end of a trying semester of grad school, my boyfriend and I pitched a tent on the banks of the Resurrection River on the Kenai Peninsula. We’d put our food in the shared bear-proof shelter at the edge of the campground, but around midnight, I woke up and realized I’d left a granola bar in the pocket of my pants, which I was still wearing.

I went through the same debate I do about getting up to pee in the middle of the night: I know I’ll sleep better if I do, but I just can’t bring myself to unzip my cozy cocoon of a sleeping bag and drag myself out of the tent. As if on cue, I heard the telltale snorfling of a bear on the lookout for an easy meal. Fortunately, my trembling “Hey, bear!” was enough to scare it off, but I didn’t sleep much for the rest of the night. I do a snack sweep before I head to bed now. 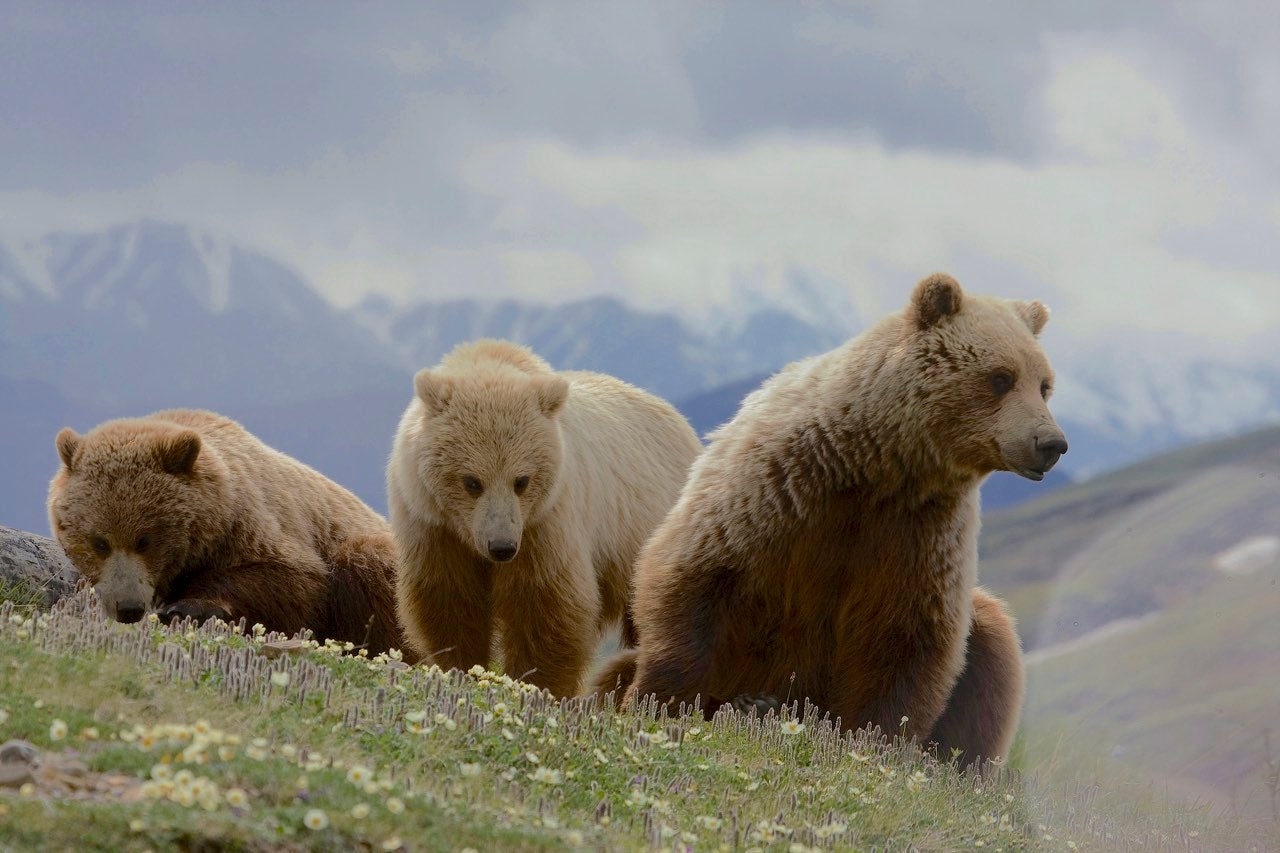 Never grow complacent—no matter how much experience you have.

I’ve spent enough time in the vicinity of bears that I’ve built up some confidence. But, as in all things, it’s possible to get a little too comfortable. Hiking in Hatcher Pass in the Talkeetna Mountains one crisp fall day, I was surprised when my dog, usually a hard charger, came racing down the trail and hid behind my legs. I figured there was a bear up ahead, and made a point to be more aware of my surroundings.

When we got back to the trailhead that afternoon, another hiker told me his dog had spooked a grizzly and brought the charging bear careening out of the bushes at him. He’d assumed his dog would alert him to danger—but not that it would bring that peril galloping back to him.

I was chastened. That could totally have been me, if only my dog weren’t such a scaredy cat. It’s easy to say, “I have bear spray; I’m good,” or “My dog will scare off a bear.” But industrial-grade pepper spray, bear bells on your shoes and a barking dog don’t do much good if you’re not paying attention.

Learning via mistakes is a time-honored outdoor tradition. I’m lucky that most of mine have been minor enough, thus far, to result mostly in charming stories, rather than in injury or death. Here’s hoping I’ve learned my lessons, and that I don’t have an occasion to add to this collection of bear-related near-misses.