Designed By Adventure: The Trailbreaker Pants and Jacket 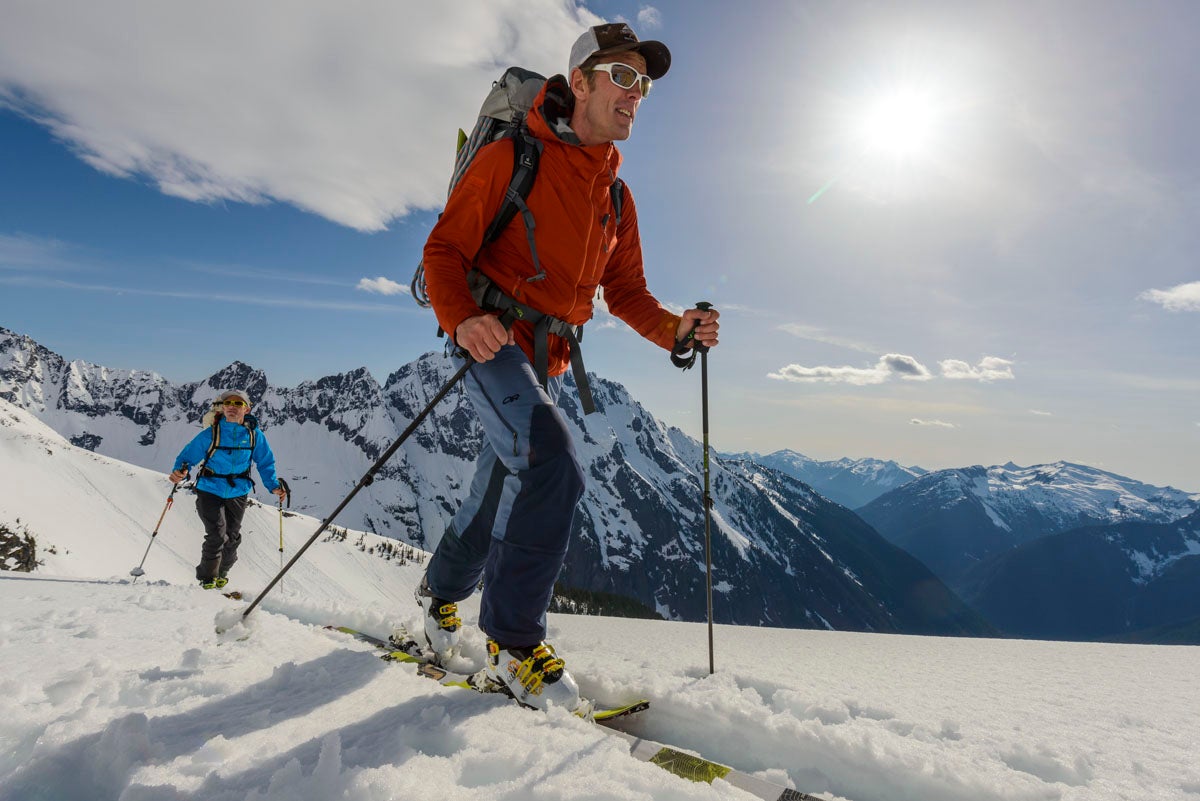 “Designed By Adventure.” At Outdoor Research, our products have been designed by adventure for more than 30 years, with features and fabrics imagined, tested and perfected in the wild. And like our products, our lives and the lives of our customers are sculpted by the experiences we have in the natural, unpredictable environments we love. We, too, are Designed By Adventure.

First light. First tracks. It’s a manta for many among us who are hungry for a fresh layer to break trail on a long tour. But with this very specialized love comes the need for a specialized clothing system — one that takes into account the terrain and activity when you’re grinding uphill, setting the skin track in snow up to your knees and then reaping the rewards in untouched powder.

“In ski touring, you need a lot of breathability while skinning, but you also need protection from the elements,” says Melanie Sirirot, Apparel Product Manager for Outdoor Research. “Getting wet from the inside can be just as bad as getting wet from the outside, so the breathable fabric is really important.”

For some, the Trailbreaker Pants have been the ultimate backcountry ski touring pants since their initial release because of their intuitive, touring-specific design and ideal combination of carefully placed breathability and protection. In fact, in the December 2013 issue of Boulder’s Elevation Outdoors Magazine said, “All gear should be this well thought out,” and “So much thought went into (the Trailbreaker Pants, they) raise the bar for every other pant out there.”  But how did this imminently functional design come to be?

“[Outdoor Research] had officially declared [backcountry] skiing as one of their core sports,” says guide, author and Outdoor Research IFMGA test team member Martin Volken, “but we didn’t yet have a ski touring specific collection.”

Initially, Volken did what we all do: he used what he had. “We essentially used alpine climbing soft shell pants for ski touring. They worked ok, but they weren’t designed for ski touring from ground up.”

This was the spark of the idea; to design a pair of ski pants purpose-built for touring. 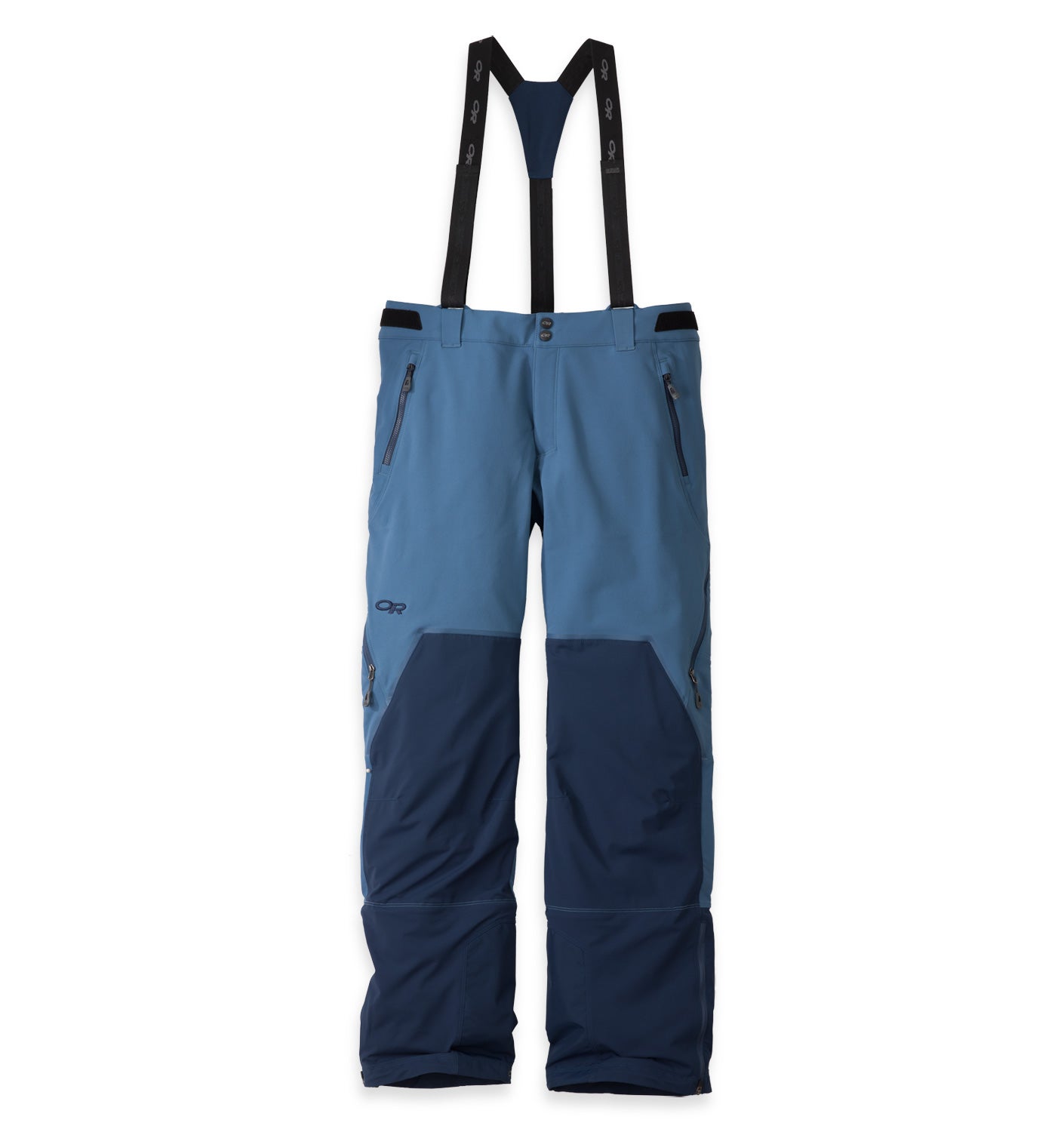 “Upon looking into it,” Volken says of the touring specific pants on the market at the time, “I realized there were three main issues that had not been addressed.”  First, there were no thigh vents in the majority of soft shell pants; Second, there had never been a hybrid fabric technology that would, as Volken said, “address the seemingly contradictory needs of waterproofness and breathability”; And third, the fact many people don't like to use a beacon harness, but prefer to have the beacon in a zippered pocket for comfort and safety.

The Outdoor Research designers set out to address all three issues. They first added thigh vents, which are situated on the inside of the thigh and not the outside. Like pit zips on a jacket, these vents are designed to efficiently dump heat. But there’s a big reason for their position: the femoral artery is located in the inner thigh, which allows you to cool (or warm) your body quickly because of the blood-rich vein’s proximity to the skin surface.

Next, the need for maximum waterproof protection in areas most exposed to the snow — below the knees — and the need for maximum breathability everywhere else required a combination of strategically placed fabrics, something Outdoor Research refers to as Hybrid-Mapped Construction. The idea behind Hybrid-Mapped Construction is simple: it means we use a combination of fabrics, each placed where they will provide the most benefit. In the case of the Trailbreaker Series, the jacket and pants start with a lightweight stretch double-weave soft shell that is incredibly breathable. Then the designers add strategically placed waterproof panels in the places most exposed to the elements; These panels keep snow from melting through and wetting out the fabric in key areas like the hood and shoulders of the jacket and lower leg sections on the pants — which gets the most exposed to snow when you’re cutting tracks. 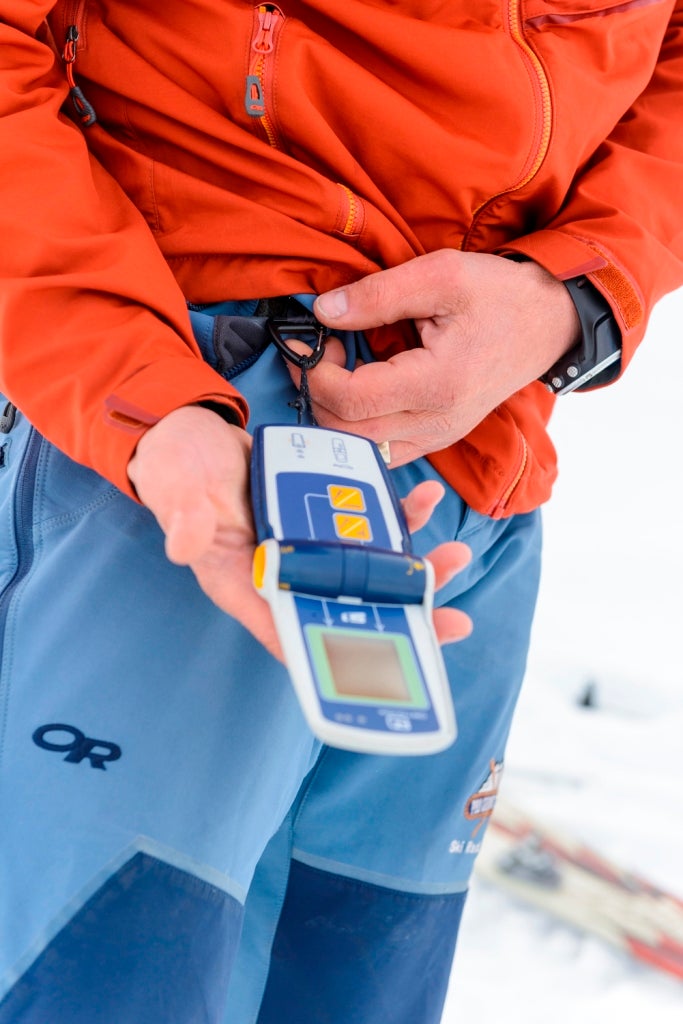 Finally, the addition of the Outdoor Research exclusive Beacon Pocket allows backcountry skiers and snowboarders to have their beacons comfortably and securely zipped away, but still close at hand.

Updated for 2014, the Trailbreaker Pants are even better than before.

“One of the updates to the pants was the addition Pertex® Shield + fabric in the lower legs,” says Sirirot, referencing the high-performance fabric now used in the Trailbreakers. The designers also added suspenders: “We continue to hear from our Ambassadors and customers that suspenders are frequently used in the backcountry,” says Sirirot. Last, the designers updated the gaiter to include the powerstrap slot, which helps hold the cuffs in place in deep snow.

Building on the success of the pants, the line expands to include a jacket in 2014 — a request that also came from Volken. 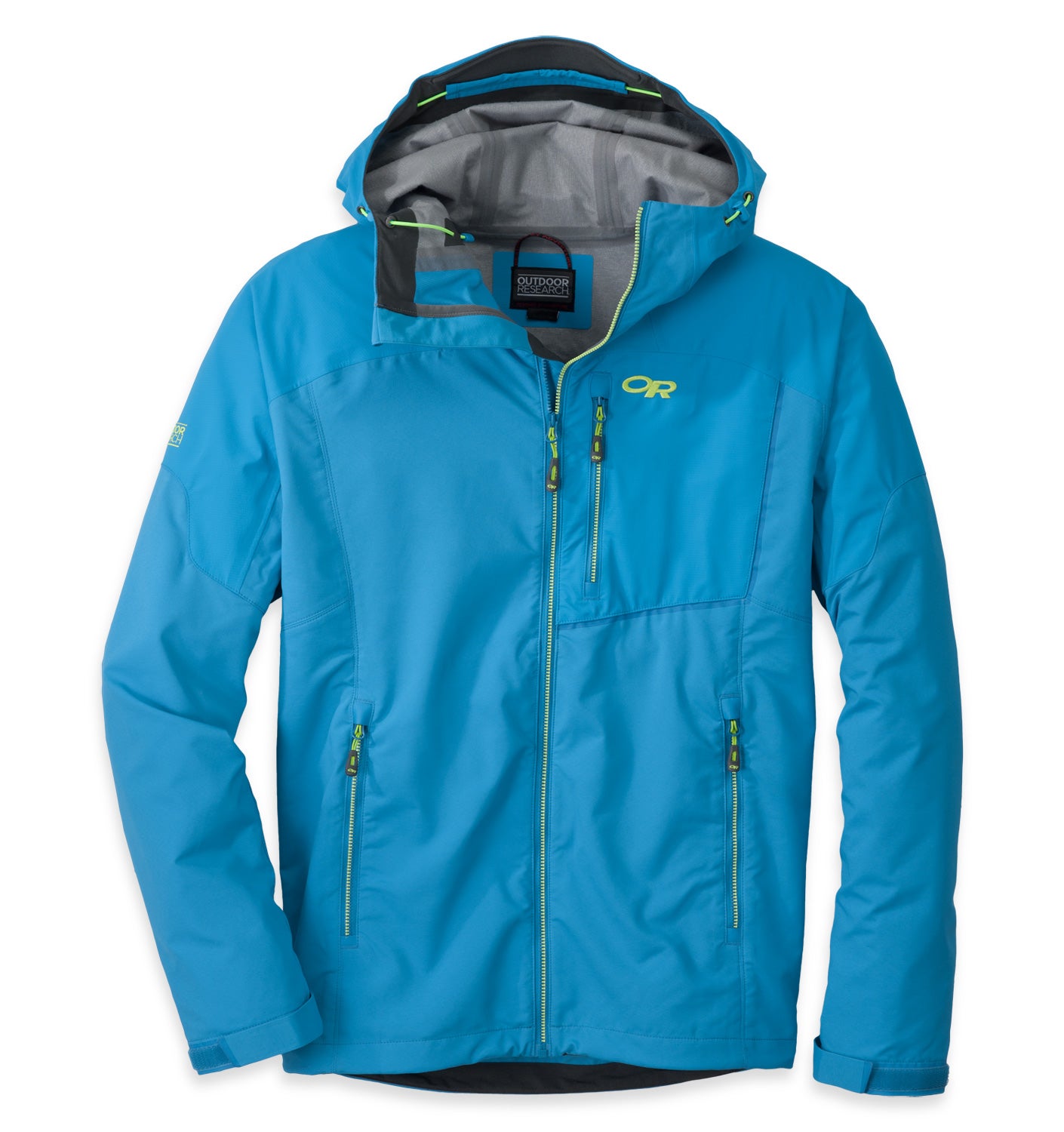 “Martin Volken has been and continues to be the driver behind the Trailbreaker Pants,” says Sirirot.  “He’s been asking for the jacket counterpart for a while.”

Finally this year he got his wish.

“The jacket was designed to go with the pants,” says Melanie Sirirot. “We wanted to create a soft shell for touring, but in a jacket that gave a bit more protection from wet snow,” something that according to Volken would fill a huge gap in the Outdoor Research line.

“The Trailbreaker Jacket was badly needed,” says Volken. “There was a large gap in the line between the Ferrosi Jacket and the Cirque Jacket,” says Volken, referencing two well-loved Outdoor Research soft shell jackets.

“Essentially what I was asking for was a Ferrosi on steroids,” says Volken. The Ferrosi Jacket, weighing in at 13.6 ounces, is an incredibly lightweight technical soft shell with wind resistance, water resistance and breathability. Volken’s idea was to, “create a bit more weather protection without cutting down on breathability too much,” something this Washington-based guide desperately wanted for his time in Cascade Mountains of the Pacific Northwest. 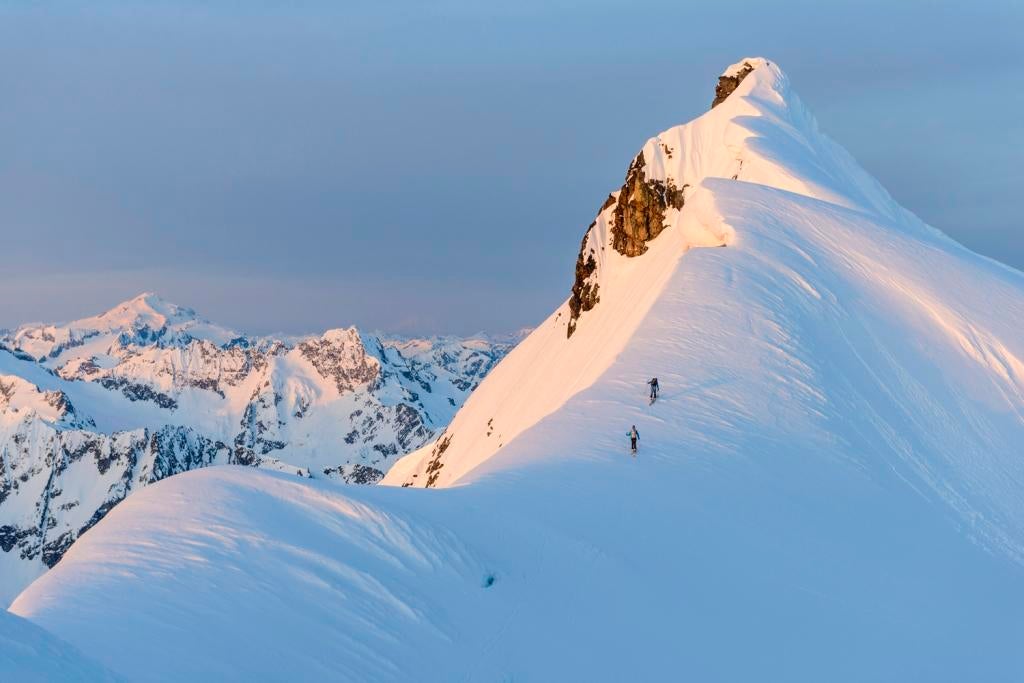 The jacket was designed much the way the pants were designed: with strategically placed waterproof Pertex® Shield+ fabric where it’s needed most — in the case of the jacket, the shoulders and hood — and the rest of the jacket constructed from a more breathable, temperature-regulating double weave soft shell.

“I have tested several different prototypes of the Trailbreaker Jacket all over the planet over the last couple of years,” says Volken. “The design objective was to make the best overall usage ski touring pant / jacket combo on the market, and I believe Outdoor Research has achieved that goal.”