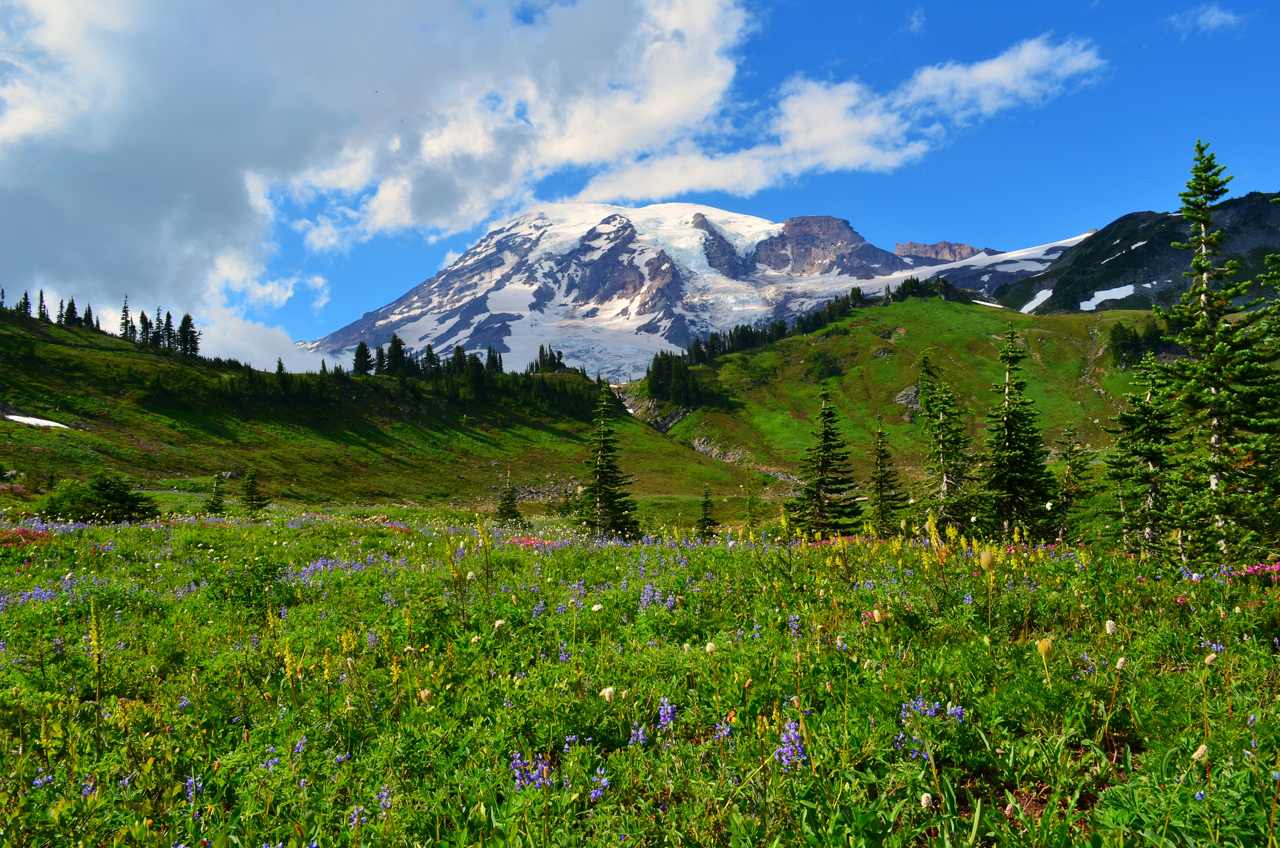 Mount Rainier is one of the most beautiful and massive mountains in the United States. It has a long history of mountaineering and has been the training ground for folks heading to the greater ranges around the world. Naturally, on a mountain that gets a lot of attention and traffic, a friendly competition has developed. It’s an old game of simply trying to see how fast one can climb and descend a peak. The guides have typically dominated this arena as they become intimate with the route and conditions and, no doubt, are aerobically talented. For many years, Willie Benegas held the round-trip record from Paradise to the summit and back via the Disappointment Cleaver route with a time of four hours and 40 minutes.

Last summer, Jason and I wanted to join the fun and tried to ski Rainier as fast as we could. We ignored poor conditions, a bad weather forecast, and the plain markings that would have guided us back to Paradise. We ended up lost, walked along the Nisqually River, and hitchhiked back to our car. We arbitrarily stopped the watch when we ran out of snow around five hours in and chalked it up as a learning experience, one that has been begging to be rectified for nearly a year.

A couple weeks ago, Eric Carter and Nick Elson left their mark in this story by setting a new all-comers record (skiing or running) of 4:19:12. By report, they had great conditions and crushed. Shortly thereafter, I started getting texts about their effort. We worked ourselves into a frenzy, unhealthily motivated to return and do our best. Fortunately, we had planned a break in work months ahead of time. Now we just needed a break with the weather.

Arriving in Paradise on Sunday, we strode into the ranger station full of optimism, given the blue skies, and predicted weeklong high pressure. Seconds later, a spunky red-headed ranger was doing his best to shatter our hopes by telling us that no one had summited in a week and a half and that the upper mountain was not in condition. He communicated that the guides were finding a few persistent weak layers that were giving them pause in their goal of resetting the route and safely taking their clients to the summit.

Apparently, the upper mountain had opened up earlier this year than normal and a ladder was in place spanning one particularly large crevasse among other smaller ones. Since we were trying to balance speed and safety, we were reliant on the route being “opened” by the guides and were really grateful for the work they were doing.

The next three days were like the movie Groundhog Day. We’d wake up, talk to the rangers, find out no one had summited, and then ski on the Muir Snowfield. We had nearly every modern amenity at our disposal and we were going crazy with boredom. Expedition glacier life would kill us. Finally, it became apparent that Wednesday would be the day. Sustained high pressure had healed the snowpack, a private party had pushed to the summit, and the guides would surely be taking their clients up. Each day had been successively warmer, with the freezing levels nearing 13,000 feet and conditions on the lower mountain noticeably worse every morning. We were worried we had missed our ideal window.

After a very restless night’s sleep, I bounced out of bed before the 5 a.m. alarm. We geared up, choked down a light meal, caffeinated, and walked out into the very bright morning just before 6 a.m. Clad in speed suits, we carried race packs with beacon, shovel, crampons, ski crampons, whippets, extra layers, extra skins, a liter of fluid mixed with gels, harnesses, and a small rope. It was least amount of gear with which we felt comfortable, given the uncertain conditions on the upper mountain.

We knew Eric and Nick’s splits and with some encouragement from Eric, we were gunning for them. Our optimistic schedule was to start at 6 a.m., hit Camp Muir in an hour and twenty minutes, the summit in close to three hours, and then ski down as fast as possible to hopefully slip in under four hours round trip.

From the gun, Jason set the pace up to the Muir Snowfield. Without a solid refreeze, the surface was soft and we were both worried we were fighting a losing battle. Wearing a heart-rate monitor, I knew I was going too hard (i.e. HR >180), but ignored it. On the snowfield, we found an unsupportable crust and persisted in the uneven tracks of others, but as we climbed higher, the crust became stronger and we found a nice, smooth skin track. I was in front now and could feel Camp Muir. I started pushing as we were gaining energy from the climbers watching us approach from the edge of camp.

We rolled through in 1:22, the climbers cheering us on. I guess the full spandex gave us away. Or maybe it was the strained look on my face and the fact that we didn’t even pause as we skinned through. Either way, it was great to have some moral support because it was about to get hard.

Around the corner, the Ingraham Glacier was beautifully broken up and I could see a couple parties high above the Cleaver. Everything was coming together perfectly.

Except, it was becoming a struggle to keep up with Jason. He turned and yelled at me to keep pushing. He screamed, “This is supposed to hurt!” We alternated booting and skinning with ski crampons on the Cleaver and narrowly averted disaster when Jason fumbled a ski that began to slide off toward the jaws of the huge crevasses below. I sprinted laterally to block it but luckily a small wind lip stopped it just above me. I grabbed it, booted 15 feet up to Jason, and we were off again.

Above the Cleaver, we mostly skinned with ski crampons but were forced out of our skis a couple times, most notably when we came upon the ladder. In my mind, I thought I would just walk right across, but Jason dropped to his knees and began to crawl. Standing and waiting my turn, that just seemed like a much better idea, so onto my knees I went. Laughing, Jason tried to take a picture but missed it. Here we were, trying to go faster than anyone before on this mountain, and we were literally crawling. The next couple thousand feet were filled with mind-numbing discomfort. The crater rim came into view but looked impossibly far away. However, my pain-addled mind was in a time warp, because seconds later, we crested the rim and found ourselves in a whiteout. Of the 9,000 feet of ascent, 8,950 were brilliantly sunny. Then the last couple minutes were anticlimactic as we followed wands and unceremoniously transitioned. Our friend Noah, who graciously joined us on the trip to offer support, was on the summit. I wanted to talk with him but only grunted a few unintelligible sounds as I ripped skins. We then turned around to see how well we could hold it together for one of the longest continuous ski descents in the lower 48. The watch read 3:15:39.

Once out of the crater, I was fighting cramps in my quads, adductors, and hamstrings. This was going to be difficult. Mercifully, I found the upper mountain to ski quite well and was able to relax as Jason thought it slightly more difficult. Onto the Cleaver, we were cruising and perfect corn made this portion fast and easy. Jason glanced at his watch and said sub four hours would be hard. I thought just getting down the last 6,000 feet without stopping would be hard.

We side stepped up the gentle rise back to Ingraham Flats and then skied all out. We slashed turns to the side of multiple parties who openly cheered us on. I was psyched for their support and glad to be able to get by quickly without interfering with their adventures. While rocketing across the Cowlitz along the gentle traverse back to Camp Muir, I glanced at my watch and saw 3:43. Sub-four was still possible, but we needed a little luck with the conditions.

Arcing big turns on the upper Muir, we joyfully found perfect corn and mostly smooth snow. This effortless skiing couldn’t last, and as we descended along the lower reaches of the snowfield, sticky isothermic glop started grabbing at my skis. Then I was summersaulting, hoping not to have the day ruined so close to the finish. Back on my feet unscathed, one second later I was tearing after Jason.

I caught up with him 30 seconds out of Paradise as he was standing there, wondering what the hell I was doing. We pointed ‘em for home and I started screaming out of joy, relief, and the satisfaction of giving my best effort on that day. Jason’s wife was there shooting photos and we lounged around enjoying the moment. Soon Noah came down, leading to more celebrating before the reality of the impending 12-hour drive set in.

Now, back in Salt Lake City, I’m psyched that we were lucky enough to be able to enjoy Rainier in the style we hoped for and in a time that represented a solid effort for the given conditions. While I believe our time of 3:57:55 to be the fastest round trip known to date, it would be foolish to think it will hold up. I predict runners will summit well under three hours and that skiers will be able to cut significant time from this. I’m just glad to play a part in the progression of the speed game on this classic North American mountain.