Dreaming Of A 5.Fun Vacay? 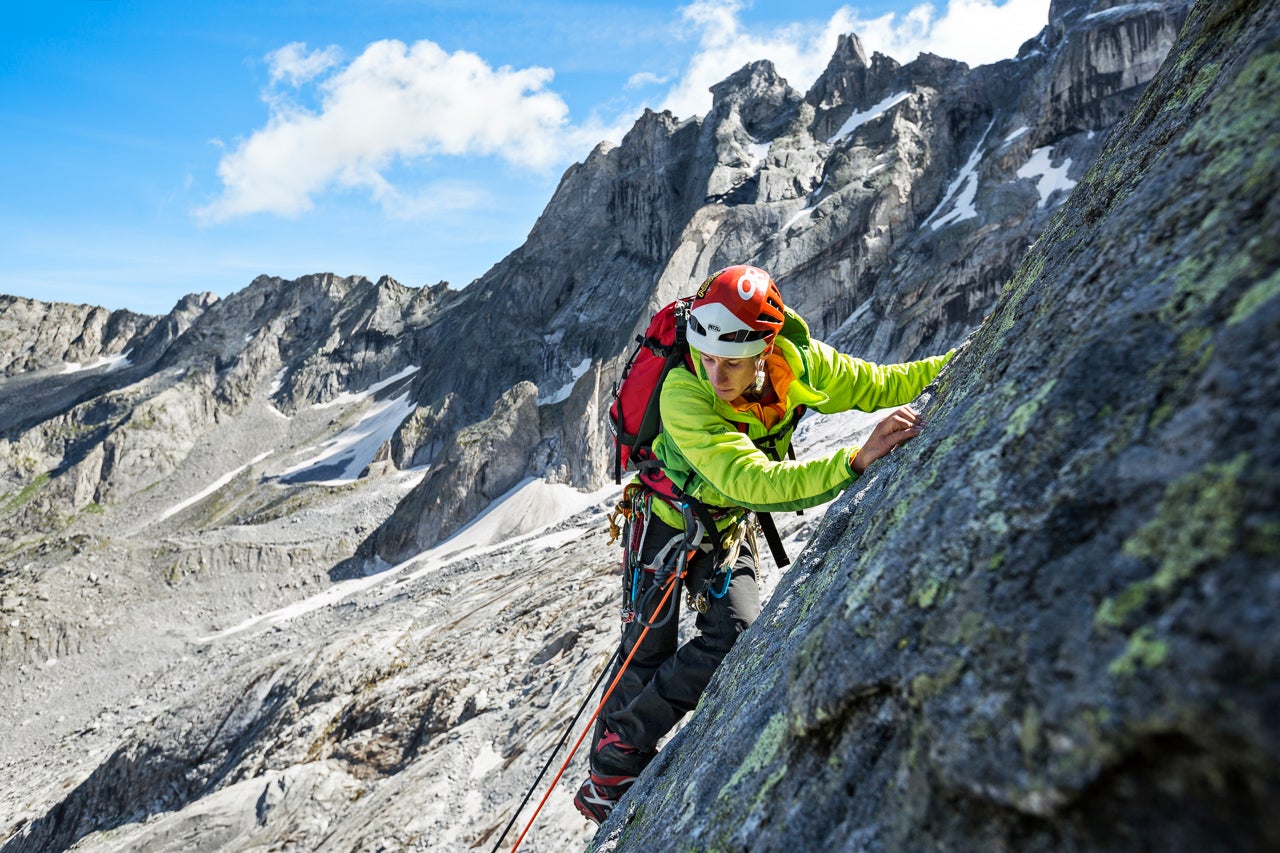 We booked a trip to Switzerland’s Bregaglia range based on the natural gravity of something climbers call “5.Fun.” Moderate, not-so-scary routes; engaging but not so much that you’d lose sleep the night before. The classic climbs of the Bregaglia share a common theme, commonly defined with the French word “plaisir”: long (mostly 12 pitches or more), moderate (mostly in the 5.7-5.10 range), and what guidebooks call “well-equipped”: whereas most mountain routes in the U.S. require a full rack of trad gear, the climbs in the Bregaglia have bolted belay stations, and routes that are partially- or fully bolted. And they can all be climbed from two huts: the Sciora hut and the Sasc Fura hut. Meaning we’d take small packs, small racks, and leave with big smiles and memories of big views. 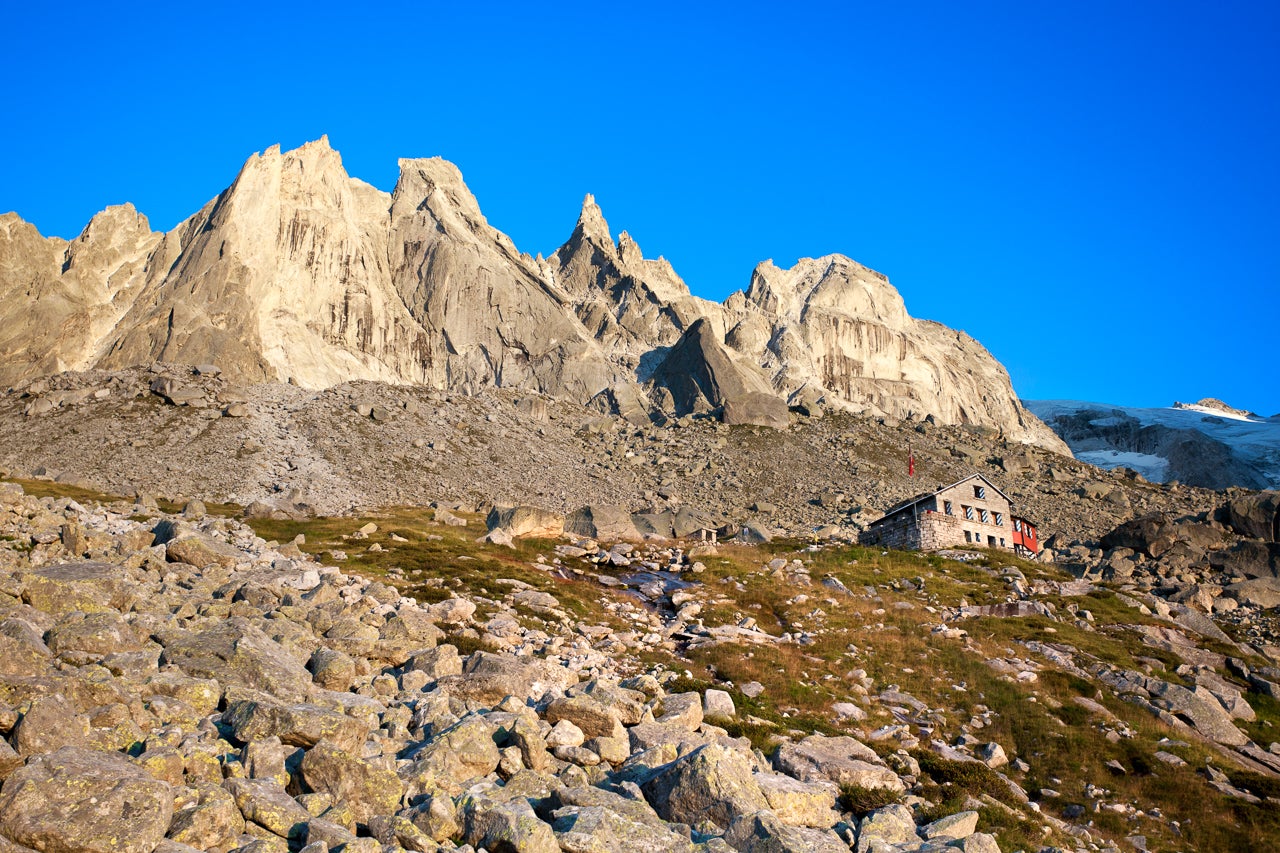 Tucked just inside the Swiss-Italian border and 1,000 meters above the nearest town, the Sciora Hut is surrounded by the giants of the Sciora Group, a wall of granite peaks towering 1,000 meters above the hut: from left to right, Sciora Dafora (3169m), Punta Pioda (3238m), Ago di Sciora (3205m), and Sciora di Dentro (3275m). Their faces are lined with routes from 6 to 26 pitches. Just to the west of the Sciora lies the Piz Badile, one of the most iconic mountains in the Alps: its famous North Ridge is a mega-popular 900-meter romp no harder than 5.6, and its northeast face is one of the Six Great North Faces of the Alps, first climbed in 1937 by the now-classic Cassin Route (22 pitches, 5.10b).

In his memoir, Mountains of My Life, Walter Bonatti wrote of the region:

“The whole Bregaglia is wonderful, but among the valleys that converge on it is one most dear to mountaineers, the Val Bondasca. It begins at the little village of Bondo on the left-hand slope, then rises, fantastic as a fairytale, to the foot of some of the greatest granite colossi in the Alps. What mountaineer has not at least dreamt of knowing the clear faces of the Badile, the Cengalo, Gemelli, Sciora, Trubinasca, and many other peaks?” 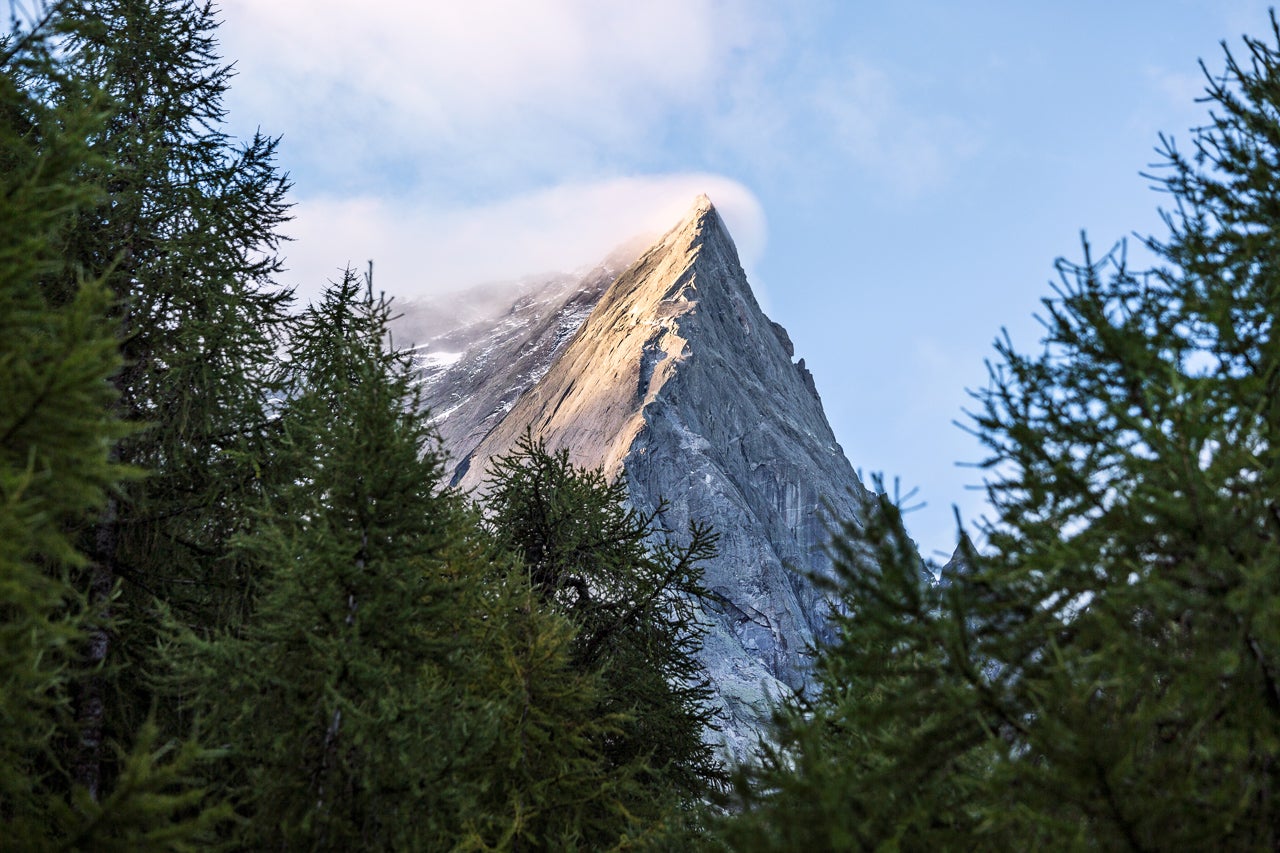 The Piz Badile (3308m) holds two of the most famous climbs in Europe: The Nordkante (North Ridge), a 24-pitch 5.6 rock route with bolted belays, known for being one of the best climbs of its grade in the Alps, and the Cassin route, a 22-pitch 5.10b route up the northeast face.

The Nordkante was first climbed by Alfred Zürcher and guide Walter Risch in 1923, and the Badile’s northeast face became known as one of the iconic “Great North Faces” of the Alps. The story of its first ascent is mountaineering legend: Ricardo Cassin, with partners Gino Esposito and Vittorio Ratti, started up the then-unclimbed northeast face in July 1937, to find Mario Molteni and Giusseppe Valsecchi on the face, attempting its first ascent. Molteni and Valsecchi asked to join Cassin's party, and over three days, the team worked its way up the face. They summited in a thunderstorm, and both Molteni and Valsecchi died of exposure and exhaustion on the descent off the Badile.

Both routes became classics, the Nordkante for its relatively easy and perfectly aesthetic line up the ridge, and the Cassin as a testpiece for alpinists.

In the Bregaglia, most climbing routes have one thing in common: an incredible view of the surrounding peaks. Here, Simon Duverney heads up Buguleisen, a moderate 13-pitch climb on the lower “Flatiron” buttress of Pizzi Gemelli. Buguleisen is a classic intro to climbing in the area: a bolted 5.8 route with a short approach from the Sciora hut, and one of the first formations to dry after rain. Bolted belays make many of the long climbs in the area appealing: climbers can head out with a light rack, climb quickly, and rappel off from belay stations in the event of weather. 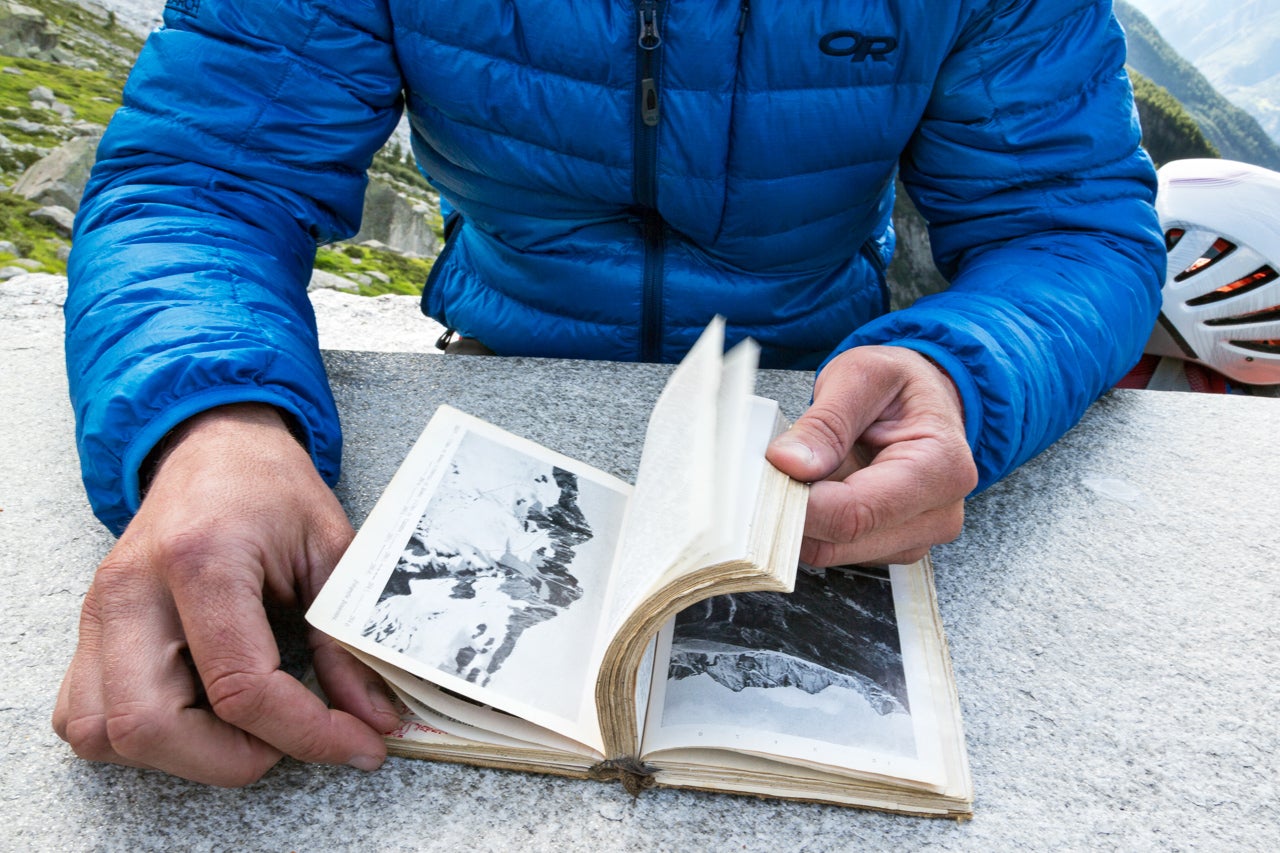 The history of climbing in the Bregaglia dates back to the 1800s. The high passes, such as the Cacciabella Pass (2,896m) were used by Italian smugglers bringing tobacco into Switzerland far in advance of the first climbing for pleasure in the area. In 1867, American W.A.B. Coolidge made the first ascent of the Piz Badile by its south ridge with French guides François Devouassoud and Henri Devouassoud, which the Alpine Club called “the beginning of serious rock-climbing in the district." In the 1890s, a Swiss guide named Christian Klucker was hired by Russian photographer and writer Anton von Rydzewski to help him explore the region. Although history would reflect that the two men quite despised each other, they teamed up for dozens of ascents, including many of the first ascents of peaks and routes in the Bregaglia: Pizzi Gemelli, Sciora di Fuori, Punta Pioda, West Ridge of Piz Badile, North Face Piz Cengalo, West Arete of Punta Trubinasca, South Ridge of Sciora di Dentro, West Ridge of Ago di Sciora, and others. 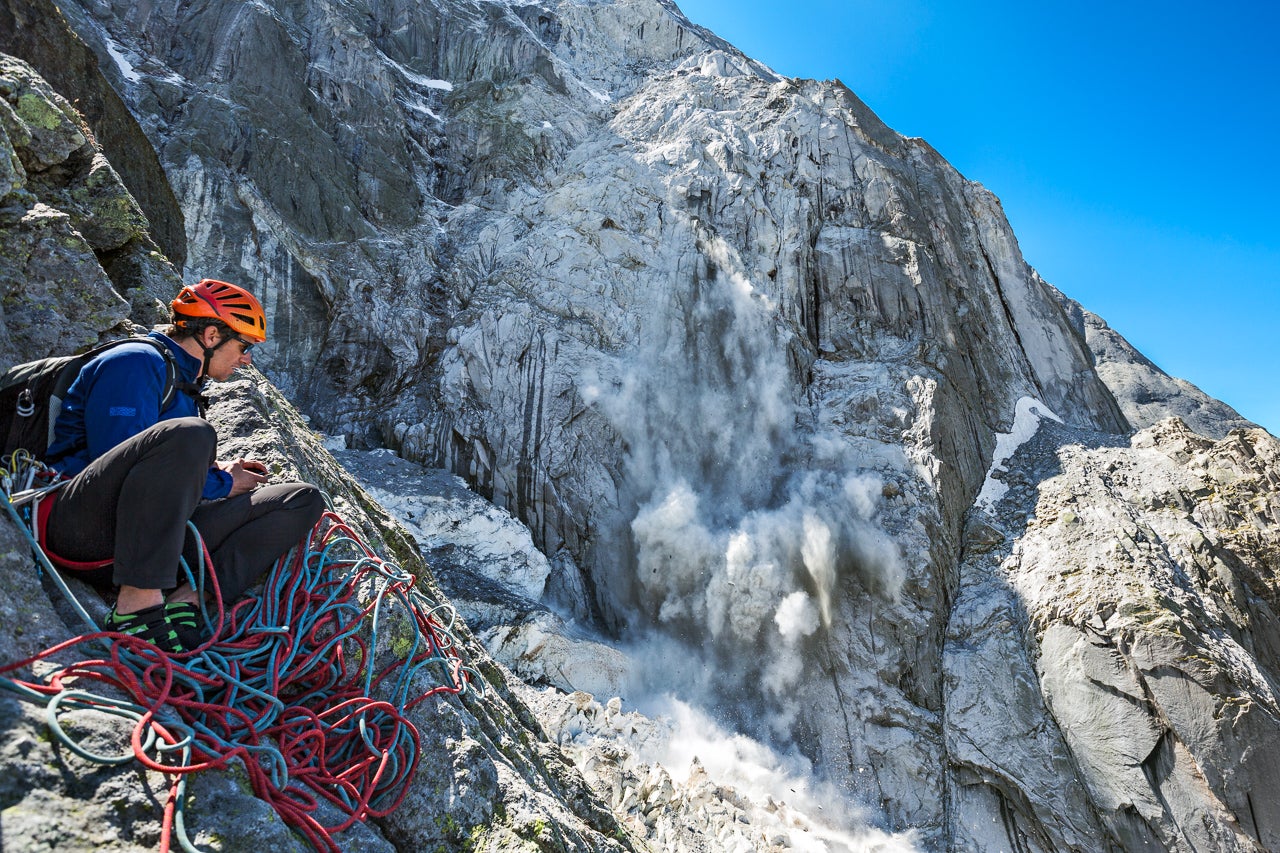 The ease of access in the Bregaglia puts climbers into big alpine terrain, where the mountains are still very much alive. Although most climbing routes are clean and free of rockfall danger, the non-climbed faces of the peaks frequently shed rock—the rumbles of rockfall can be heard from the Sciora hut throughout the day and night. In this photo, a car-sized block has just slid off the east face of Piz Cengalo, a few hundred feet from our belay at the top of Buguleisen, and exploded on the glacier between Pizzi Gemelli and Piz Cengalo. 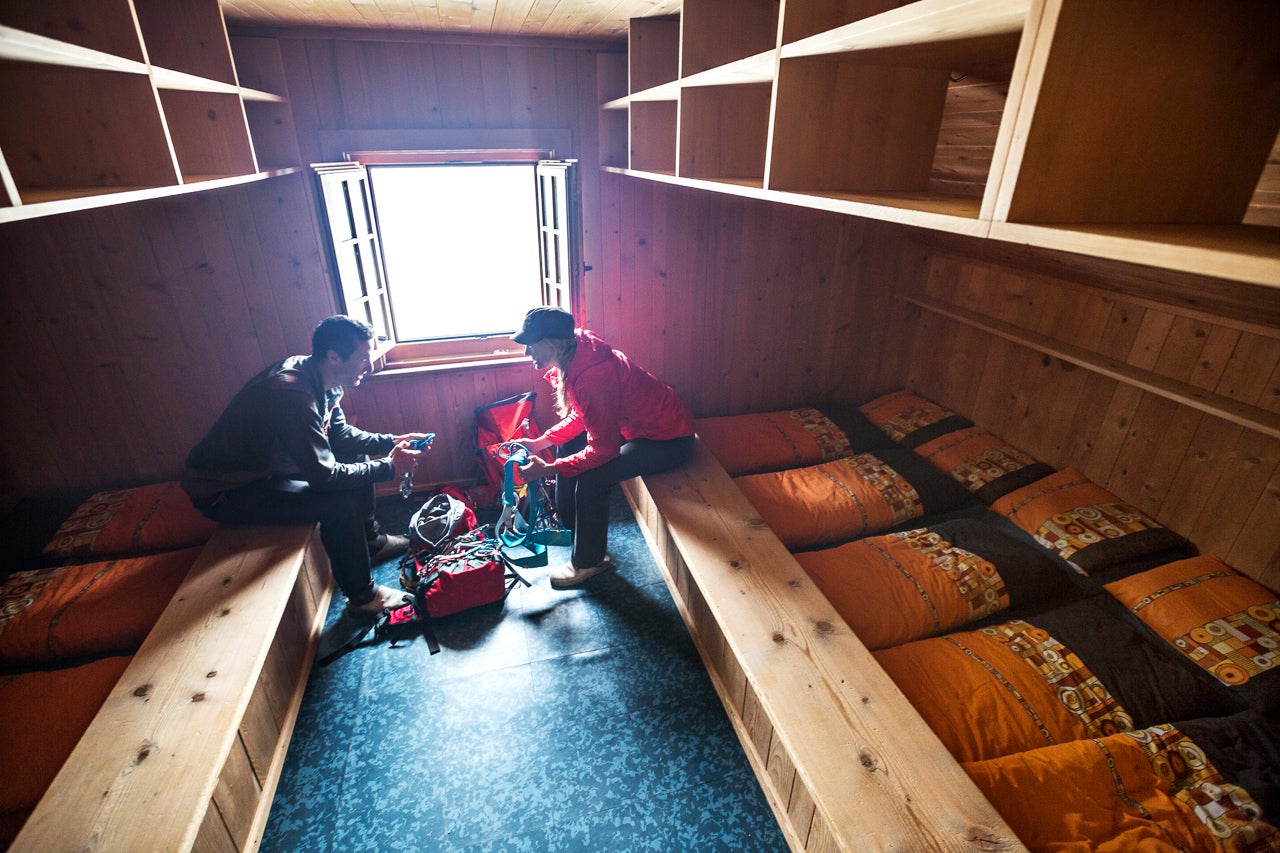 Staying at huts in the Bregaglia makes for a lighter pack, shorter approach, and less exposure to harsh weather up high. The Sciora hut, at 2118 meters, is 1000 vertical meters up the trail from the trailhead, and sleeps 42 people in several bunkrooms. Hut guardians are essential sources of route beta, conditions, and weather reports, as well as providers of hot dinners each night, and local dishes throughout the day.

At the Sciora hut, hut guardians Barbara and Reto Salis still cook on a wood stove, with a single gas burner they use if they need to warm things up quickly. They’ve talked about installing a water turbine in the upcoming years, in order to power a freezer for the hut. On the south side of the hut, they have a satellite dish that provides Internet access. All supplies arrive by helicopter. 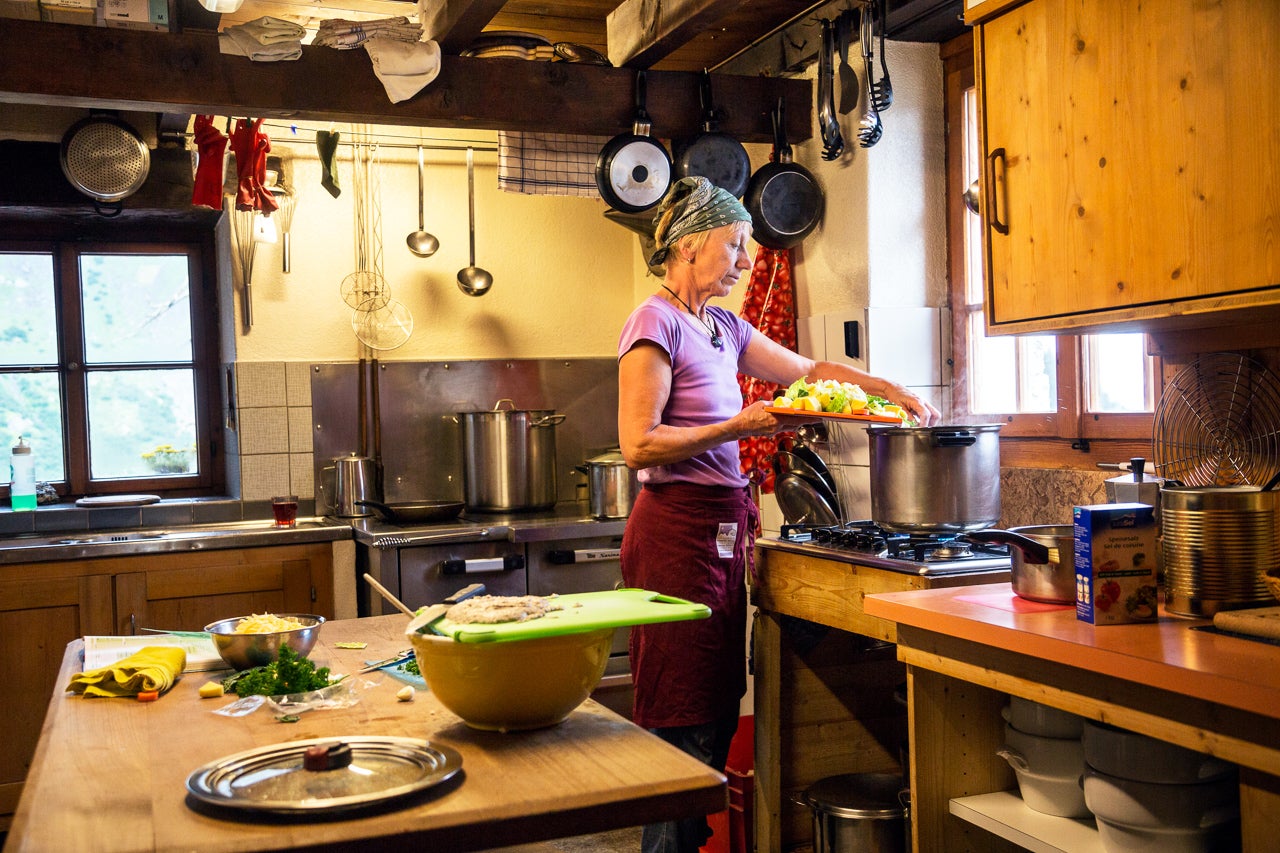 Heidi Altweger was a social worker helping disabled people for more than 15 years. When she turned 50, she decided she wanted a change in her life. She saw an ad in the local newspaper that the Swiss Alpine Club was looking for a guardian for the Sasc Fura hut, at the base of the north ridge of the Piz Badile. She first climbed the North Ridge of the Piz Badile in 1988, and became the hut guardian almost two decades later, in 2007. The hut is open every year from the end of June to the end of September, and every summer she tries to arrange for one day off so she can climb the Badile, usually via the North Ridge.

“When there’s perfect conditions, the north Ridge—it’s something special,” she says. “It’s incredible, this mountain, this ridge, this kind of climbing here. It’s always quiet.” 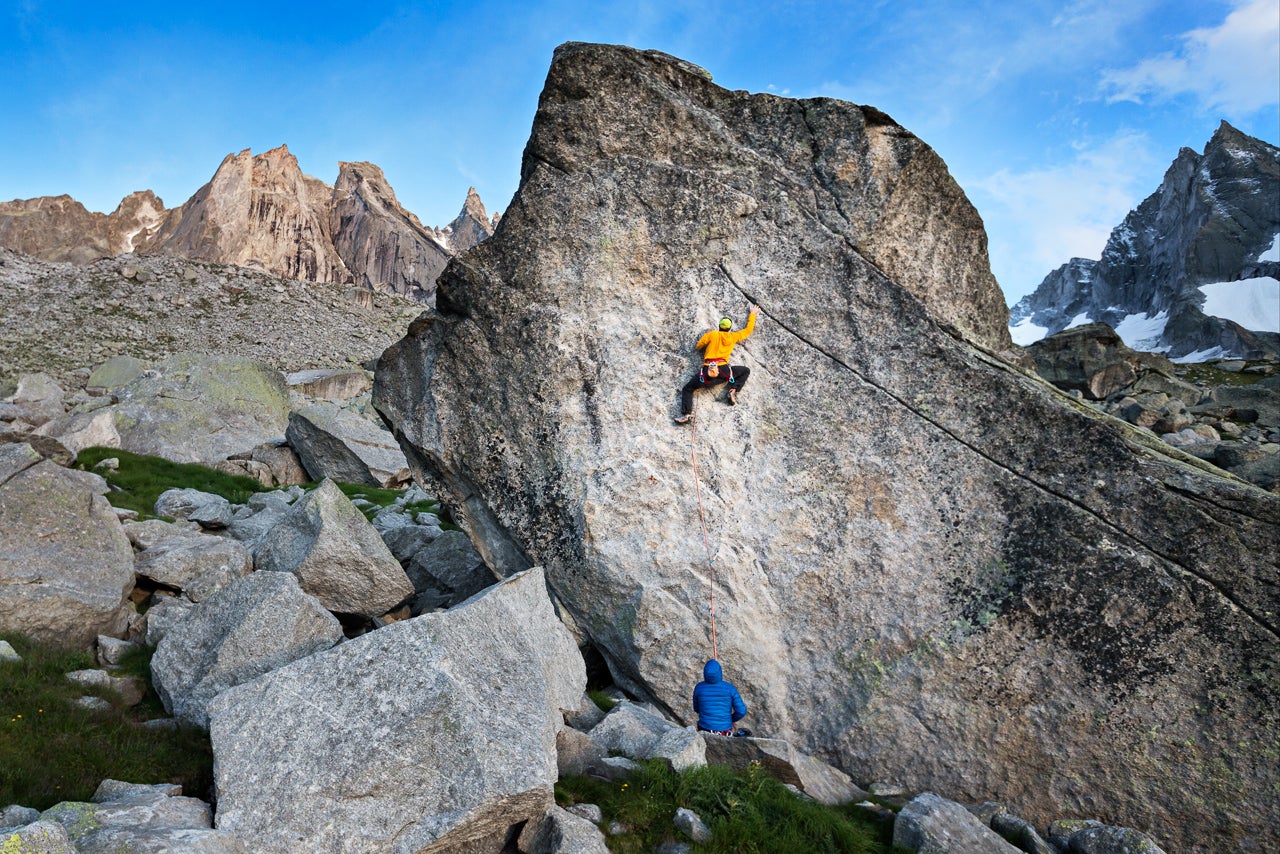 Not every route in the Bregaglia is a dozen or more pitches long: The Sciora hut sits just a few feet downhill from a field of huge granite blocks, tiny compared to the peaks in the background, but tall enough to make for a few dozen highball boulder problems and short, difficult roped climbing routes. Here, Simon Duverney tackles a powerful 7a bolted route on the north face of a boulder just before dinner—and sunset. The peaks of the Sciora group stand above left of the boulder, and Pizzi Gemelli and Piz Cengalo sit just to the right of the boulder. Other multipitch “cragging” routes exist on the lower faces just above the Sciora hut. 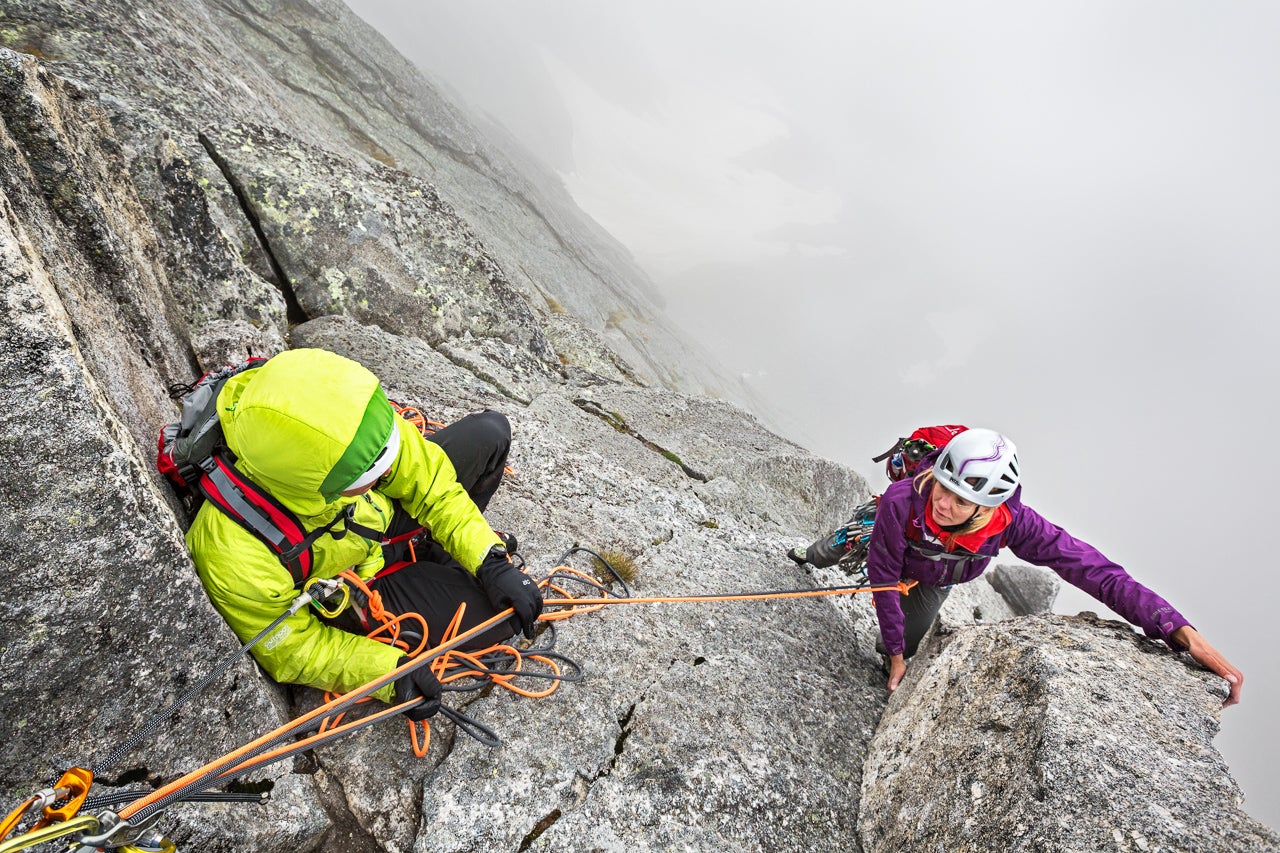 Bolted routes and easy approaches doesn’t necessarily mean the Bregaglia is a carefee climbing paradise. It’s still alpine, and weather is a factor. The week before our trip to the Sciora and Sasc Fura huts, a series of storms had iced up the top pitches of the North Ridge of the Piz Badile, and no one had summited in a couple weeks. The Cassin Route on the Badile is famously almost never 100 percent dry, either—adding to its ominous reputation. Here, Simon Duverney belays Hilary Oliver as she finishes one of the upper pitches of the West Ridge of Torre Innominata, a bolted 13-pitch 5.8 route, in intermittent mist and rain, in August. 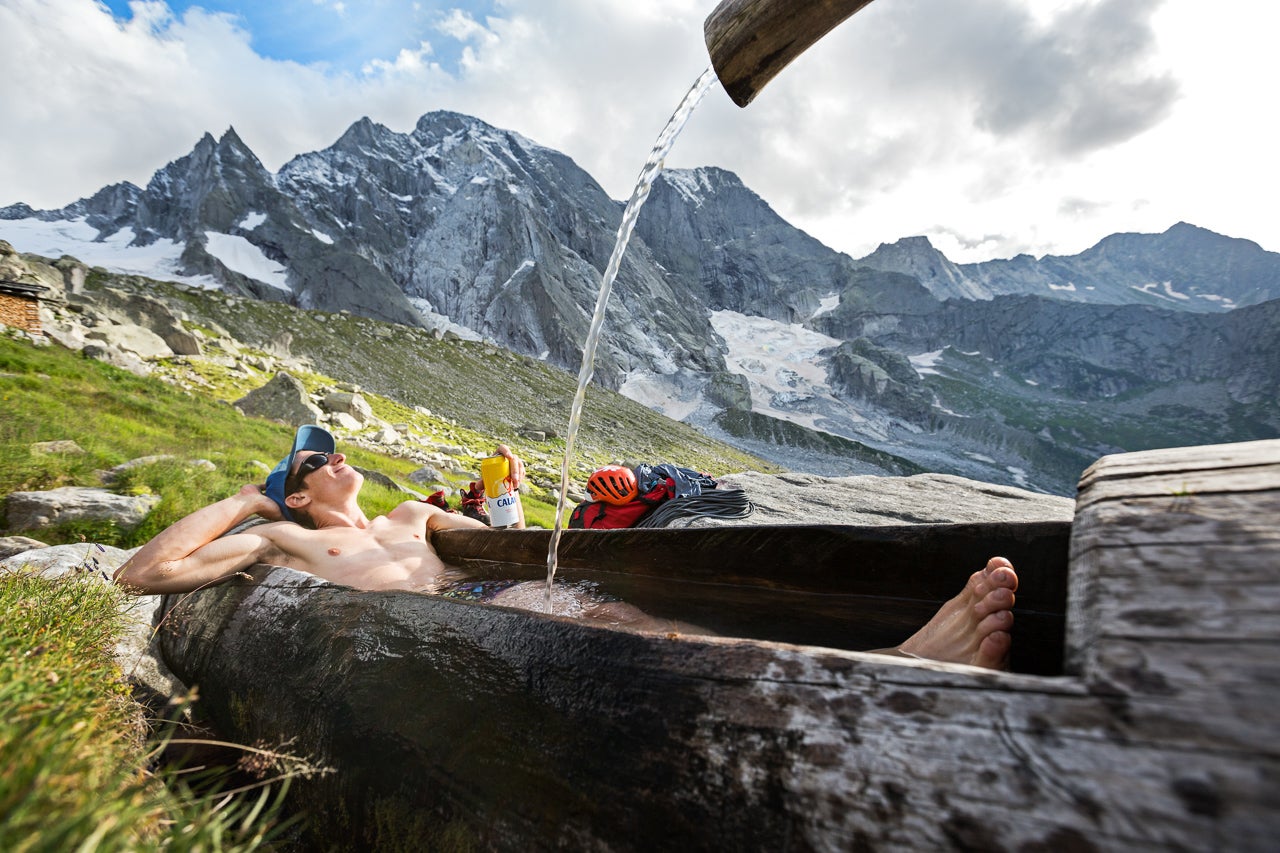 Don’t let Simon’s relaxed expression fool you—the water in the fountain next to the Sciora hut is actually extremely cold. But so is the beer in his hand. And they don’t charge you for the view of Pizzi Gemelli (far left), Piz Cengalo (middle), and the Piz Badile (far right).