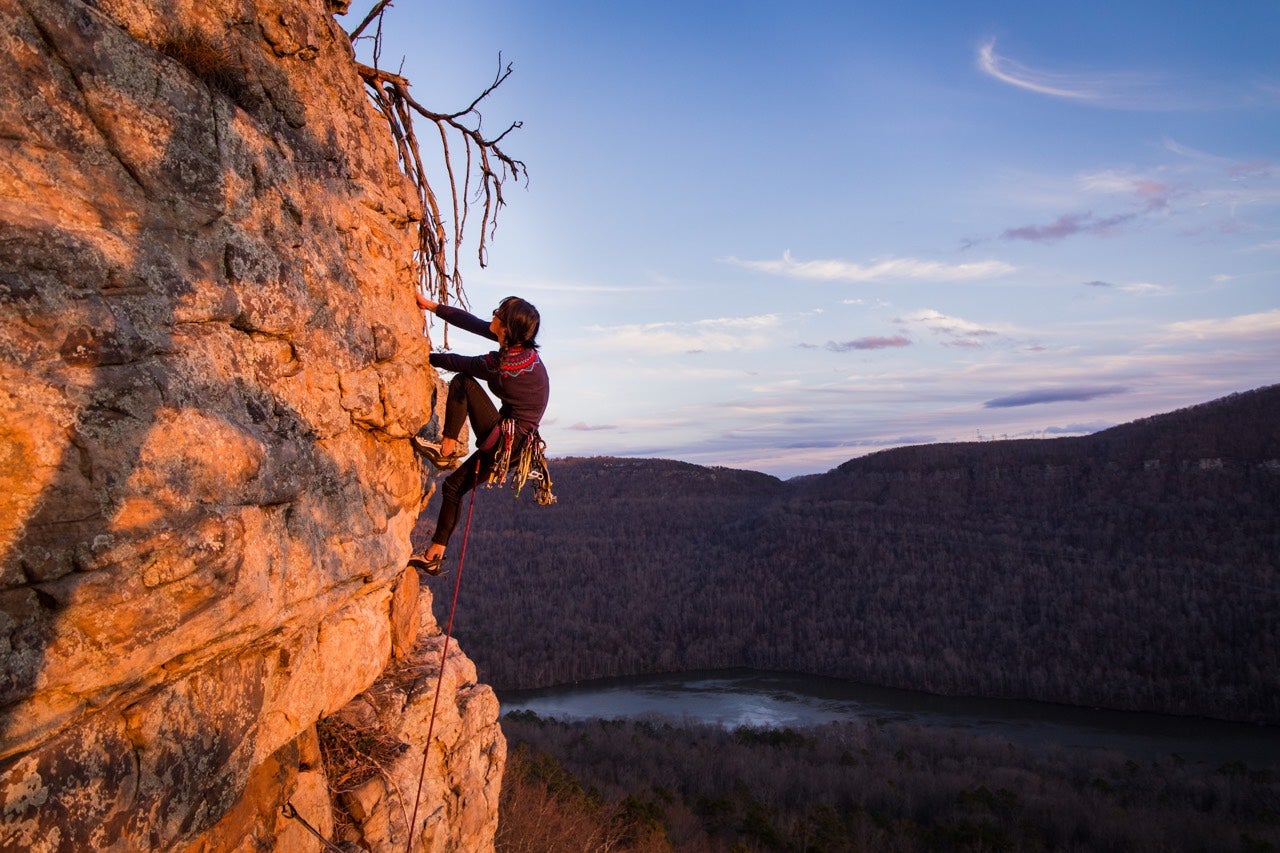 I sent my first sport climb 12b/c in Ten Sleep, Wyo., last summer. And with it, gained a revelation.

Ten Sleep is one of my favorite sport climbing spots, nestled just beyond a sleepy little cowboy town. My friend Katie Bono had plans to head to the East Coast for med school in the fall, so she raged pretty much every hard climb at every wall we visited. It was impressive—not to mention so much fun—to watch her just crushing 11s, 12s, and 13s, left and right.

Truthfully, I hadn’t been climbing very much. I had just finished up two of my Gunks and T-wall projects. I was feeling satiated with climbing, which was kind of nice, and had just begun working on a new project. I watched everybody warm up on 11s and 12s, and while they were projecting much harder grades, I happily projected the warm-up routes.

Feeling motivated from watching consecutive weekend sends, we all set out for the Shinto Wall one afternoon. I was infatuated with the wall from the first climb. Shinto is stacked with amazing quality limestone climbs, and we sampled some of the best. I tried my hand at Center El Shinto (12b/c, although Mountain Project calls it an a/b) and fell the first time I tried to scrape my way through the techy crux. I felt satisfied with my try, but climbing with Katie is just fuel for your stoke, and when she asked me if I would try it one more time, I said yes and tied in.

The second attempt, I pulled through the crux, to my own surprise. Not knowing what to do next—because I wasn’t anticipating making the move cleanly—I took another winger. I’ll come back and get it next time, I thought.

Two weeks later, I drove up again with my friend Evan Raines, and went back to Sector Shinto on our last day. The route begins in a seam and progressively gets harder as you ascend. I’d tried it a few days prior and worked out my beta. This time, on my second attempt, I made my way through the slightly leaning technical crux, worked my way left to the traverse, caught my breath and continued out right to clip the bolt. I clipped the anchors not too long after that. As I was lowered, I felt pleased.

On the drive back through the canyon, I told Evan that maybe Ten Sleep grades were maybe a little soft. (Ok, maybe I was also comparing it to New River Gorge grades.)

Evan pointed something out to me: “Maybe it is different rock and a different style than what you normally climb, but you shouldn’t downplay your abilities. You sent that thing–and it was a 12.”

I told him I appreciated this, and thought about it some more. It became apparent that a clear pattern exists–maybe not for all women, but definitely for me. I have a history of being too quick to downplay my accomplishments, not just in climbing, but in other areas of my life as well. I will often describe my role as only a footnote, rather than acknowledging my successes.

In Sheryl Sandberg’s book Lean In, she mentions that women are consistently less likely to consider themselves as qualified and have difficulty articulating their accomplishments in front of others. Sandberg says, “Ask a man to explain his success and he will typically credit his own innate qualities and skills. Ask a woman the same question and she will likely attribute her success to external factors, insisting she did well because ‘she worked really hard,’ or ‘got lucky’ or ‘had help from others.’ ”

I suppose that reinforcing self-belief is like exercising a muscle, and requires constant work. Even something as simple as disengaging from the occasional negative self-talk is a step in the right direction. We could all work on developing a kinder, gentler inner dialogue with more empathy and love–maybe if we were all better at nurturing ourselves, we could start treating others the same.