Ever Dream Of Climbing Waterfalls? 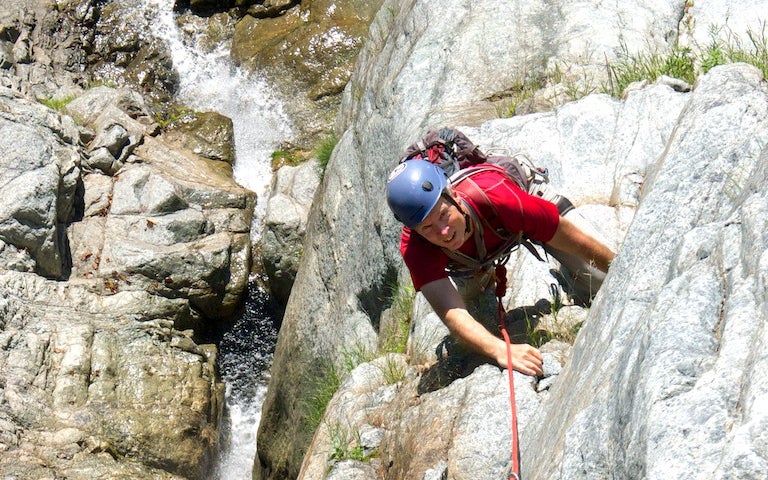 Some climbs are worth doing for the pure movement—others are known for their view. Roaring Brook Falls is one of those routes where you  might have to put up with less-than-ideal conditions, but the view and the experience is unmatchable.

The rock can be loose, mossy or wet. And there are places where you can’t find cracks to insert protective gear. But R.L. Stolz regards it as an Adirondack classic. Since the 1980s, he’s climbed the lower part of the route maybe a hundred times and done the whole 520-foot route about twenty times—about three hundred times in winter, with ice gear.

“This is a very pretty climb,” says Stolz, co-owner of Alpine Adventures in Keene. “It’s unique in that you’re climbing next to a waterfall. The downside is that it’s a little grungy in places.”

But it’s not just any waterfall you’re climbing. Roaring Brook Falls is a landmark, one of the most well known—and photographed—cascades in the Adirondacks. It plunges about three hundred feet in full view of passing motorists on Route 73. The base of the falls is reached by a short hike from the Giant Mountain trailhead in St. Huberts.

Since taking up rock climbing several years ago, I’ve been intrigued by the prospect of ascending the falls. In 1938, Jim Goodwin mentioned the climb in an article for the Adirondack Mountain Club. Roaring Brook Falls also was included in A Climber’s Guide to the Adirondacks, the region’s first rock-climbing guidebook, published in 1967.

“Loose rock and too much vegetation make the third [and final] pitch somewhat unattractive,” the book warned. “It can be avoided by escaping left into the trees.”

Frankly, that seems like bad advice. If you want the whole experience, you need to climb to the top of the falls, where Roaring Brook hurtles over a ledge and splashes down a narrow chimney. It’s a spectacular finish to the climb, and there’s none other like it in the Adirondacks.

The modern guidebook Adirondack Rock awards Roaring Brook Falls four out of five stars for the overall quality of the climb. “The fantastic setting with the views of the Great Range and the pounding water makes this a great adventure,” the book says.

Adirondack Rock rates Roaring Brook Falls 5.7. Once, this would have been regarded as a hard climb, but by today’s standards, it is thought of as moderate in difficulty.

Stolz worries that the rating might lull climbers into overlooking the dangers of Roaring Brook Falls, namely the slippery rock and the lack of protection. A few people have died from falls while scrambling around without a rope. Hikers also have fallen to their deaths from the top of the cascade. “It seems benign—until it isn’t,” Stolz says.

That said, much of Roaring Brook Falls is considerably easier than 5.7, more like scrambling than technical climbing. If led by a competent guide, a novice could do this climb, assuming he or she has some experience and is undaunted by heights.

Going For The Photos
Normally it’s broken into three pitches, each more than 150 feet long. Stolz splits the route into five pitches, primarily to improve the opportunities for photographs.

R.L. and his wife, Karen, are as serious about photography as they are about climbing. On the day of our adventure, both carry cameras. As R.L. and I climb the falls, Karen will ascend through the woods, emerging at strategic vantage points to take photos of us. R.L. plans to take additional shots with a pocket camera. I, too, have a camera. This may be the most photographed climb since Sixty Minutes filmed Alex Honnold soloing in Yosemite.

R.L. and Karen are shooting pictures for the Explorer and for a coffee-table book on Adirondack climbing that they hope to publish later this year, working title Classic Adirondack Climbs. It will describe fifty or so stellar routes, amply illustrated with color photographs. Unlike many climbing books, this one will focus on moderate routes, such as Quadrophenia on Hurricane Crag, The Matrix on Rogers Rock, Empress on Chapel Pond Slab, and, of course, Roaring Brook Falls.

In other words, it’s a book for all climbers, not just the elite. R.L. feels that too many climbers get hung up on difficulty ratings and pay insufficient attention to the aesthetic character of a route. “For some people, if there’s a 5.13 out there, they’ve got to climb it. If it happens to be in a quarry behind a welding shop, they don’t care. I do care,” he says.

Just what makes a climb a classic is hard to say. However, most of the climbs the Stolzes chose for their book are multi-pitch routes in scenic settings that they and their clients have especially enjoyed. Often they have a good story to tell about the route. “Half of the routes in the book are obvious and half are not,” R.L. says.

Like their life, the book is a joint project of theirs. Now in their late fifties, R.L, and Karen started Alpine Adventures in 1985 after traveling and climbing around the world. They wrote a business plan while waiting out a storm in a hut in New Zealand. Both had visited the Adirondacks many times and enjoyed the region, so they bought a house in Keene and have been there ever since.

The Stolzes guide clients on climbs and treks not only in the Adirondacks, but also in the Dolomites in Italy, the Blue Mountains in Australia, the Annapurna Sanctuary in Nepal, and the Anti-Atlas Mountains in Morocco. In 2013, Karen took a client up Mount Kilimanjaro. 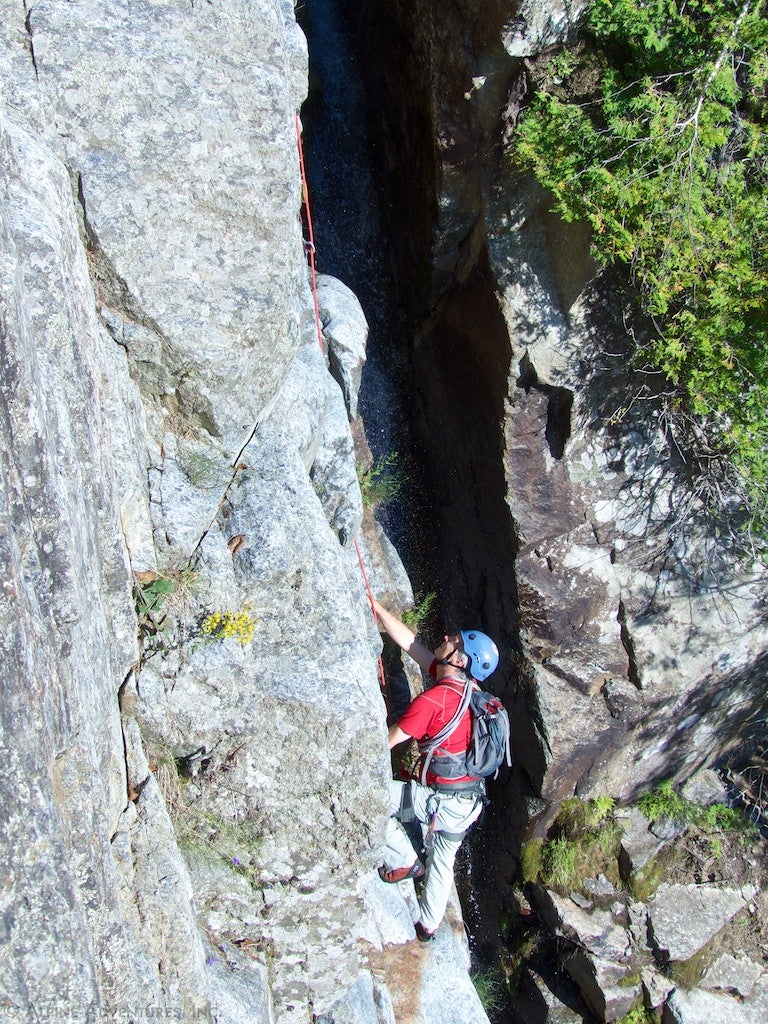 The beta
According to the guidebook, the climb begins in the center of a large white slab to the left of the waterfall. In 2011, however, Tropical Storm Irene washed away much of the vegetation that had been growing close to the waterfall. Instead of taking the traditional start, R.L. intends to climb over the newly exposed rock, a line he pioneered soon after the storm. He calls it After Irene.

He warns that the rock on the first pitch, though dry, is polished and slippery. With that, he steps onto the face and scrambles about fifty feet to a ledge, where he sets up a belay anchor. Nowhere along the way is he able to put in a cam or chock.

The next part is a bit harder. Although it would be easier to go straight up, R.L. opts to traverse right, beneath an overhang, and then up a right-facing corner. This way brings us closer to the waterfall—“the gestalt of the climb,” as he puts it.

We end this short pitch (which could be combined with the first) at the first of two soaking pools. On a hot day, it would be tempting to take a dip. This is another feature that makes Roaring Brook Falls a classic. “Where else can you climb up to take a swim?” Adirondack Rock asks.

And where else can you find a swimming hole with such stupendous views? By now we can see most of the peaks in the Great Range, a massive wall of green set against a blue sky.

The next pitch is mostly a scramble over easy terrain. The tricky bit comes at the start, where we surmount a large bulge on small footholds. We end up on a spacious ledge near the second soaking pool. It’s safe here without being on belay, so we cross the ledge together and climb a short distance to blocky brown rock next to the brook. Once I put R.L. on belay again, he crosses the stream, climbs beside it, and sets up an anchor by looping slings over a pair of somewhat loose boulders.

I cautiously step across the stream and climb the dirty, mossy rock alongside it. Thankfully, the pitch is short and easy, and there are no slips.

In our fifth and final pitch, R.L. re-crosses the stream to dry rock, then angles up and right to the very top of the waterfall.  He anchors himself to a tree and puts me on belay.

After crossing the stream, I traverse right until I’m at the top of the cataract, where the water rushes down a narrow flume. I’m so close I feel its mist. At R.L.’s request, I pose for photos. It gives me a moment to enjoy the view down the waterfall and toward the mountains in the distance. I’m almost disappointed when the photo session ends. I make one or two easy moves and hoist myself onto a broad ledge where R.L. and Karen are waiting. We change into our hiking shoes, sort the gear, coil the rope, and start down the trail back to Route 73.

The climb turned out to be easier than I expected, but it confirmed R.L.’s observation that a rock route needn’t be difficult to be fun or aesthetically pleasing—meaningful, if you will. Roaring Brook Falls is a classic in my book, too.