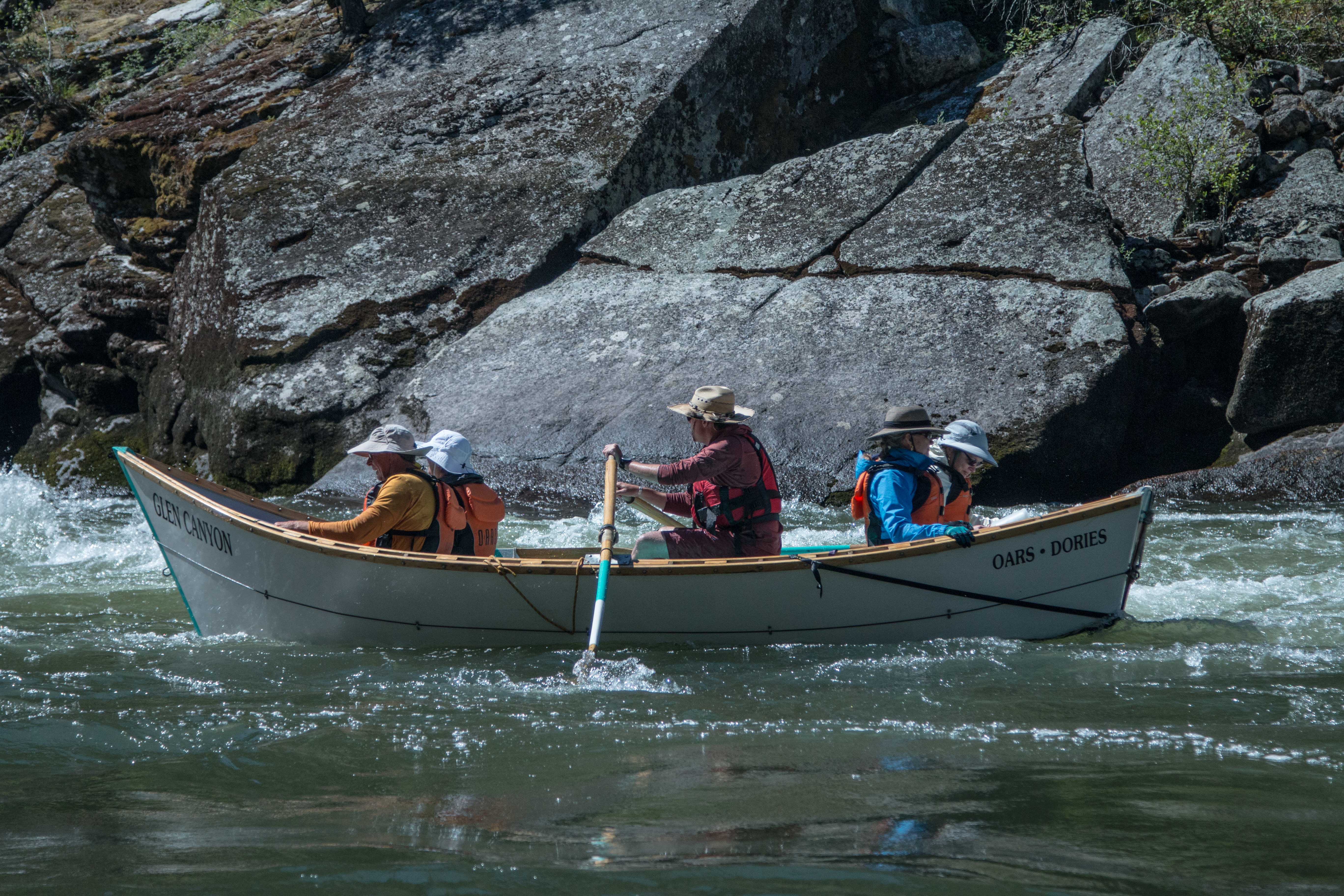 You could call me a dory fan girl, and apparently I'm not the only one. For some of us it may have started with reading The Emerald Mile, Kevin Fedarko's bestseller about the fastest ride through the Grand Canyon. Or maybe we're all just ready for something special, craving a new—actually old—way to connect to our rivers. But it seems river fans just can't get enough of dories these days. On a rececnt trip down Idaho's Main Salmon with river outfitter OARS, I learned that they can barely keep up with the demand for all-dory trips through the Grand Canyon—so they're increasing their offerings of all-dory guided trips on other rivers, too. It was my first time in a dory, and if I have anything to do with it, it won't be my last. Here are a few highlights from the trip, and a few reasons a river trip in a dory is unlike any other. 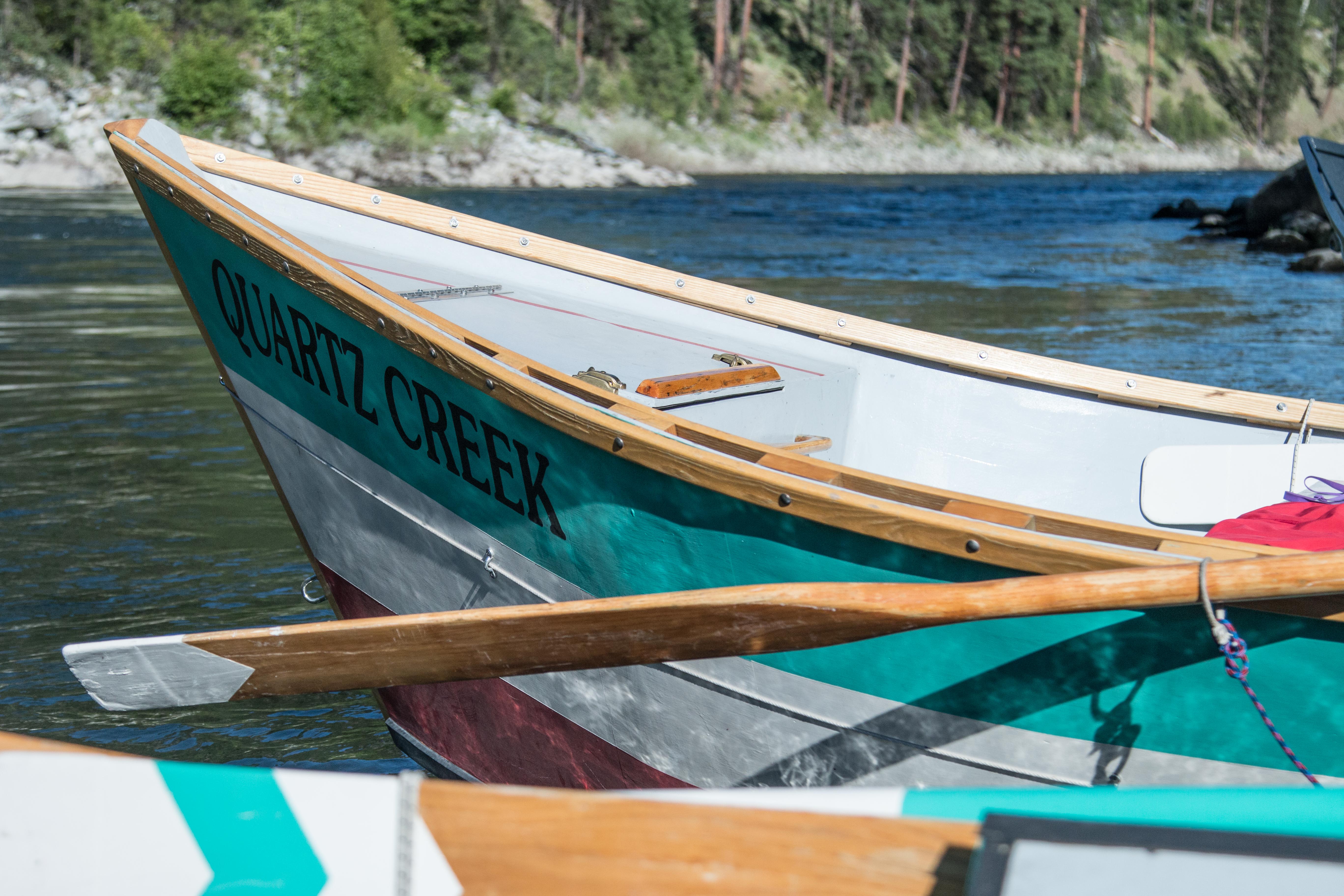 River dories like these evolved from flat-bottomed ocean fishing boats. Since the late 1800's, river runners have been making adaptations to those boats, slowly making them more whitewater friendly. The dories we have now are the result of a century of evolution—some of the latest changes happening during the 1960's. Martin Litton and P.T. Reilly wanted a practical boat for the Grand Canyon—one that could compete with the popular rubber rafts, but that would keep the style and history of the traditional wood boats. They worked with boat builders Keith Steele and Jerry Briggs, and the result was beautiful. The high stern slices through whitewater, shooting the boat smoothly over waves. The boats hold four passengers plus gear underneath the decking, and their shape is eye-catching and graceful as they float downriver. 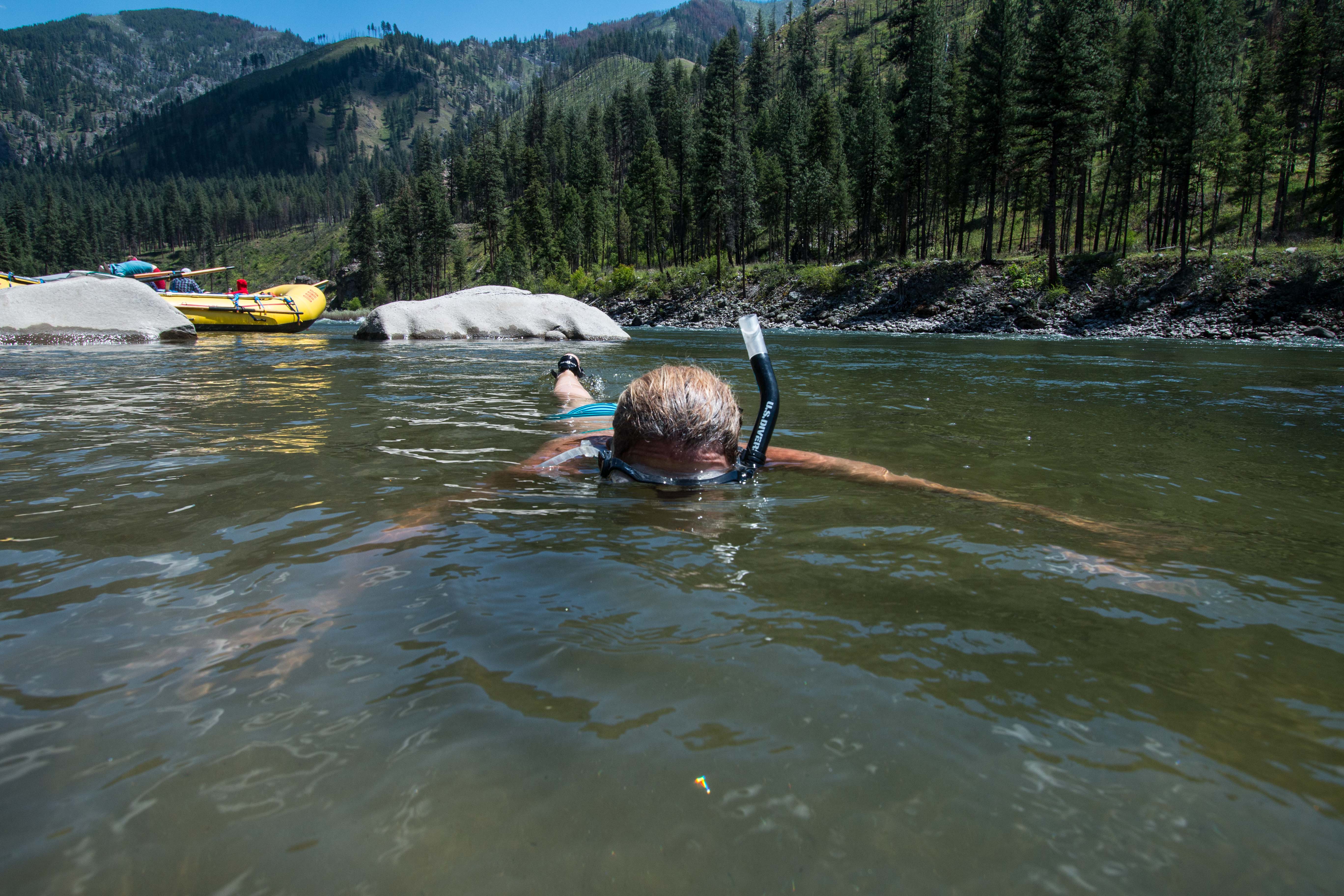 Litton, who helped shape river dories into what they are today, had another motive other than his own whitewater enjoyment: He believed that the more people experienced wild places like the Grand Canyon, the more they'd be motivated to preserve them. He would take writers on river trips, giving them fodder for stories that helped mobilize the American public to oppose dams on the Colorado River in the Grand Canyon. Litton's goal was to get people to experience these places firsthand, giving the feeling that they now had a stake in those places' future.

The Main Salmon River is designated Wild and Scenic to protect its free-flowing status. In Litton's footsteps, we jumped in for the full experience, snorkeling near camp, riding some of the whitewater in a ducky—and even swimming a few rapids. Here, Amy Souers Kober, communications director for conservation organization American Rivers, takes a closer look at the underwater wildlife at Jim Moore's camp. 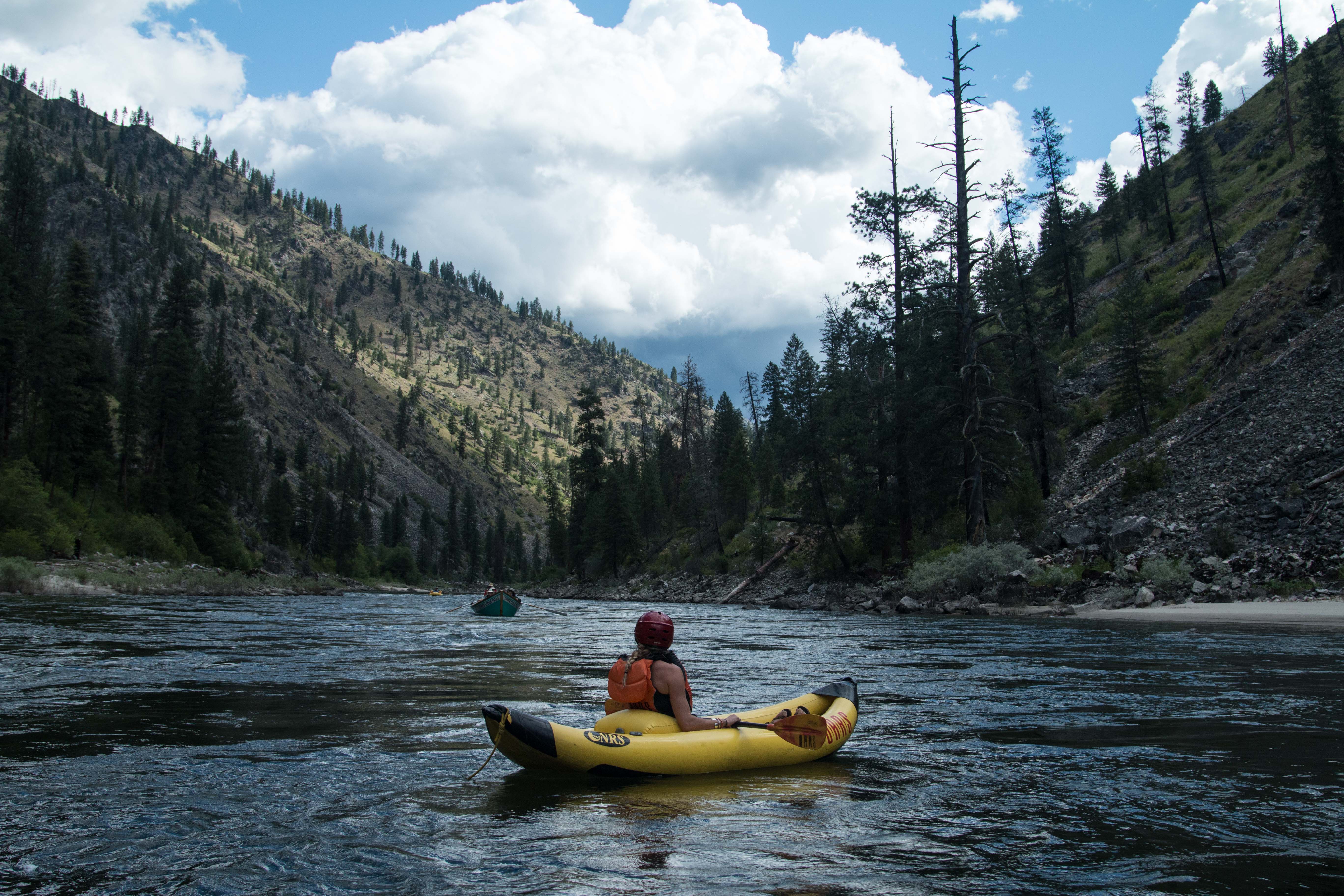 Jillian Lukiwski takes a break from paddling the ducky to watch the dories floating around the bend. As fun as it is to splash through Class 2 and 3 water in the inflatable kayak, both of us found it difficult not to be distracted by how stately and graceful the dory boats looked. Even on flat water, the dories looked to me like something out of an elven fantasy land. 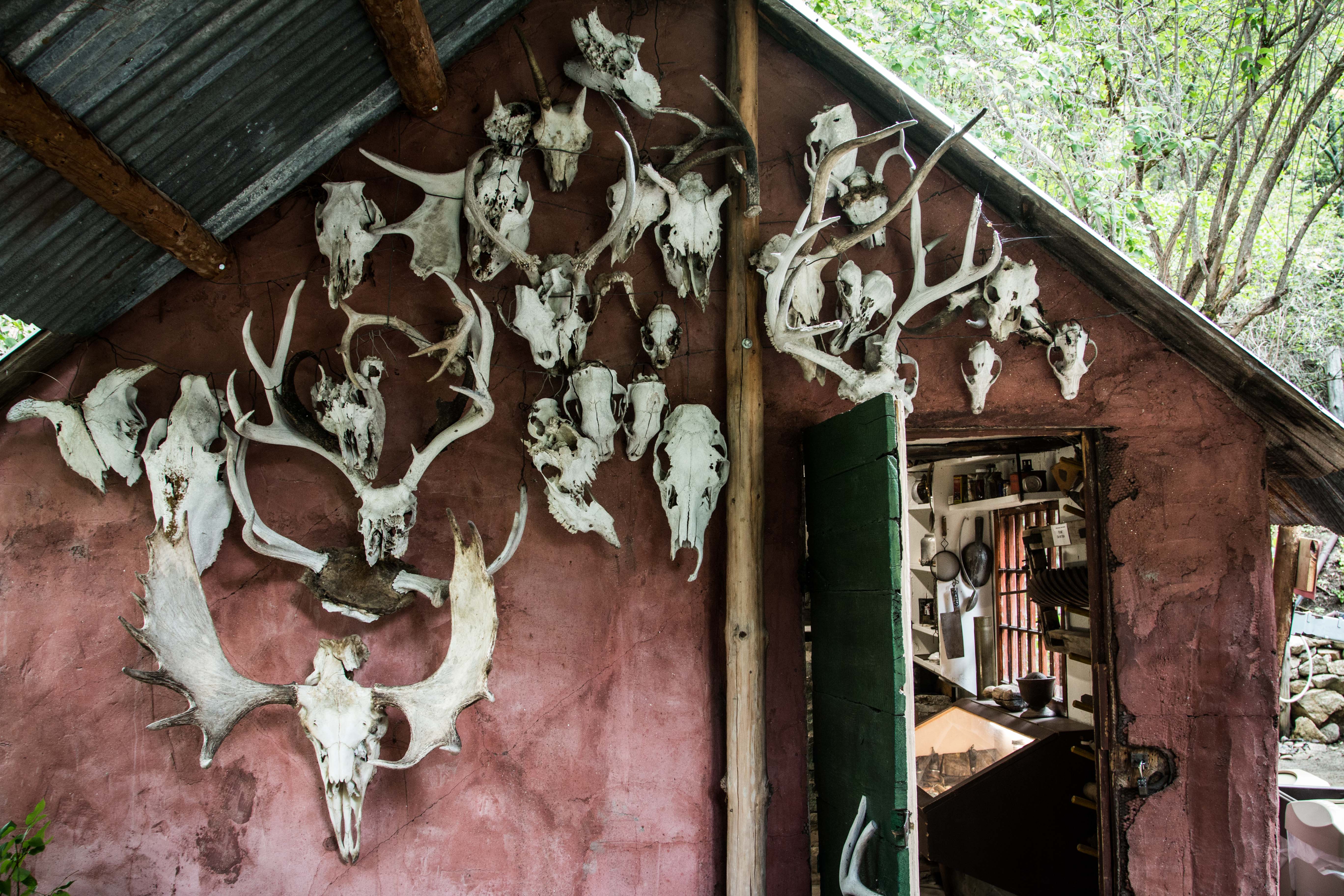 On the Main Salmon, one of the most interesting stops is at the former home of Buckskin Bill—the so-called "last of the mountain men." From 1932, he carved out a life along the river banks, living off the land and crafting all the tools he needed himself—including his own guns. During the time he lived there, the Forest Service began pushing to make the area a primitive area, which would have outlawed his existence there. Soon Buckskin Bill had erected a stone tower from which he could see—and aim a gun—up and down the river to defend his home. He died in 1980, and now a museum shows off his handiwork in his former residence. 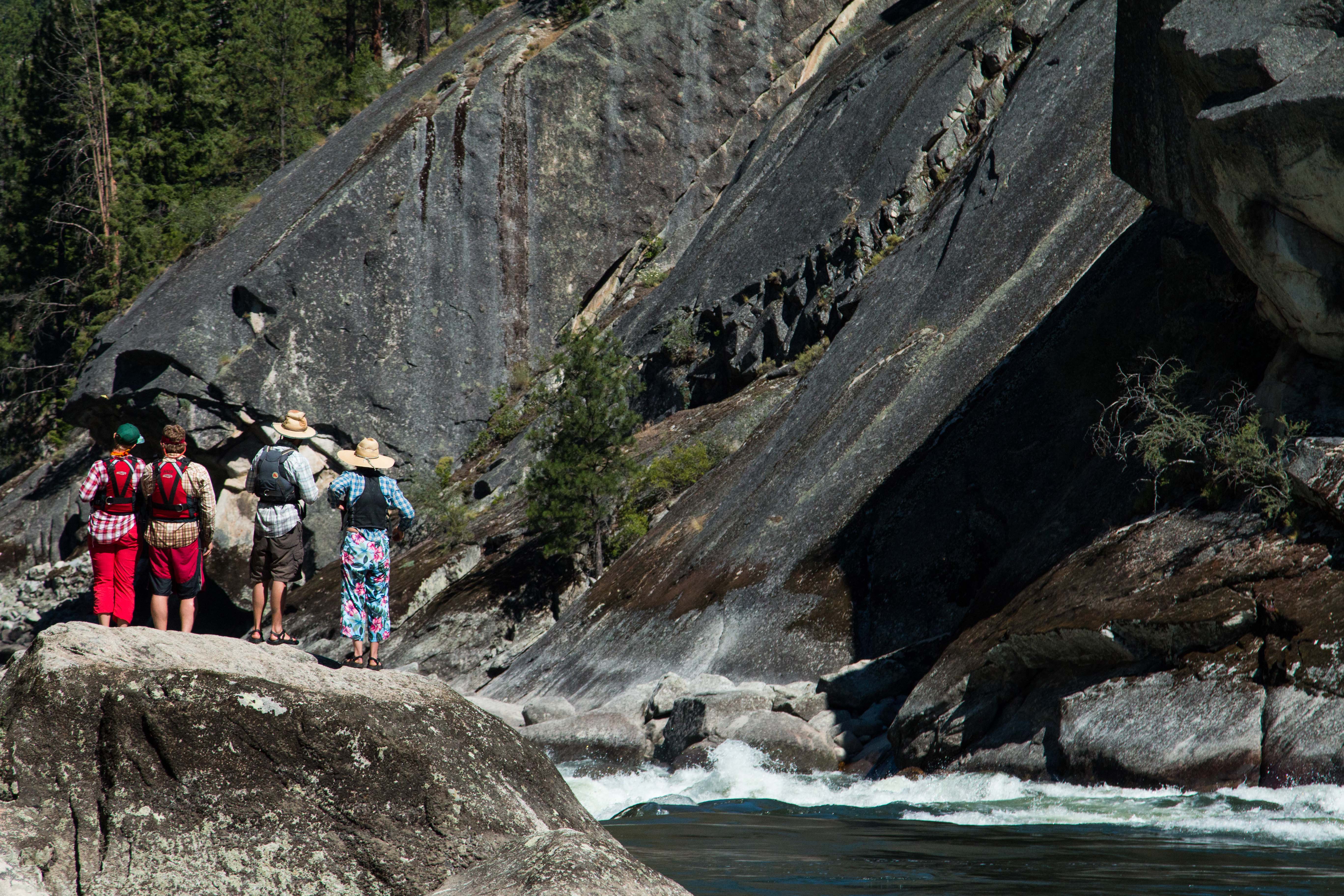 Whereas rubber rafts can take a beating, bouncing off boulders midstream, dories are a bit more delicate. Their wooden hulls suffer scrapes and holes where rafts would just bounce off. So picking a line and rowing expertly is even more important to getting a dory through a rapid unscathed. The boatmen carry repair kits with hand tools, but obviously avoiding rocks in the first place is ideal. Here, our guides scout Black Canyon Rapid. 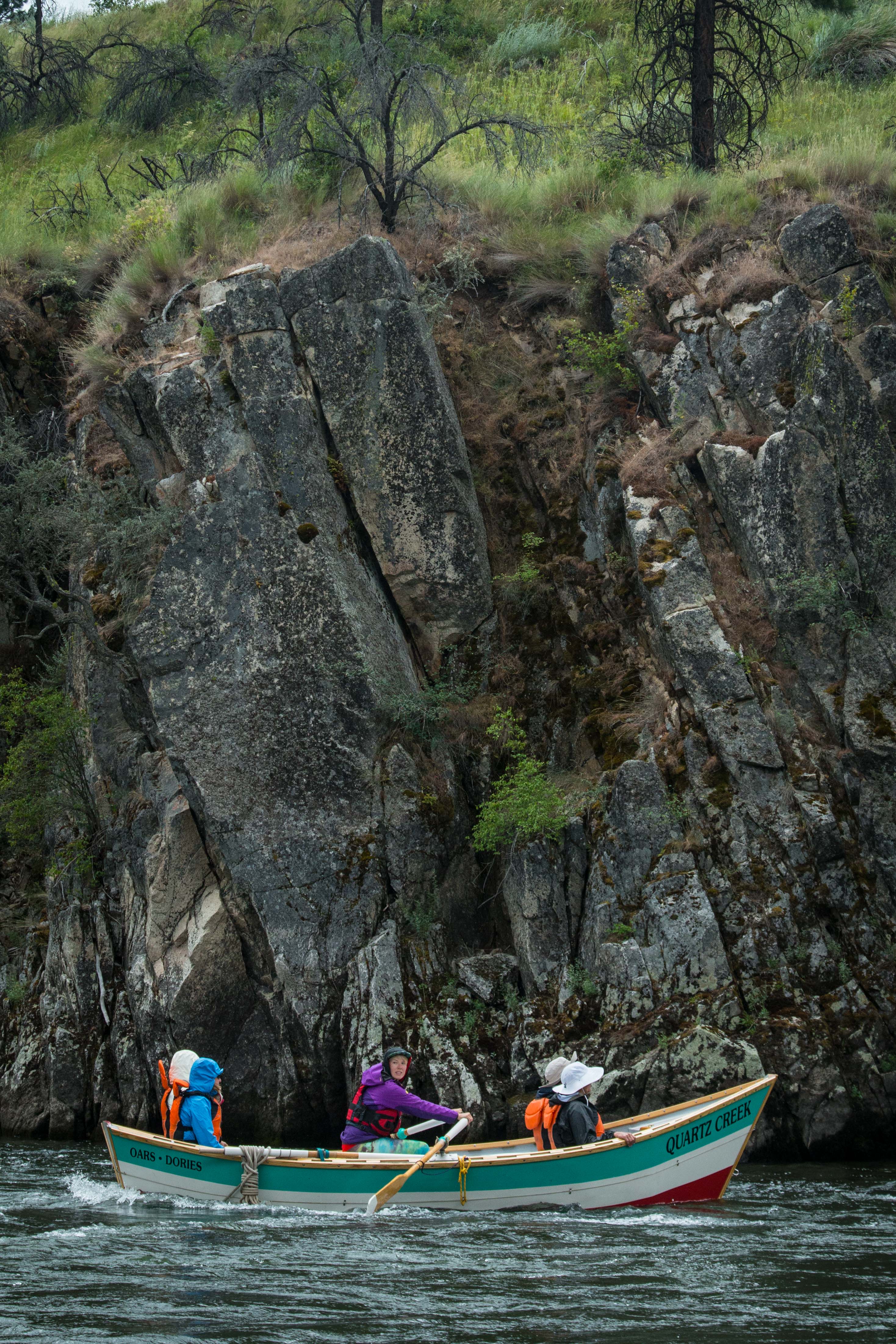 Amber Shannon rows the Quartz Creek on the one stormy day of our trip. You might recognize her from the short film In Current. Instead of the bigger, muscly strokes most people use on rubber rafts, she uses smaller, more delicate strokes to guide her dory carefully through the current. 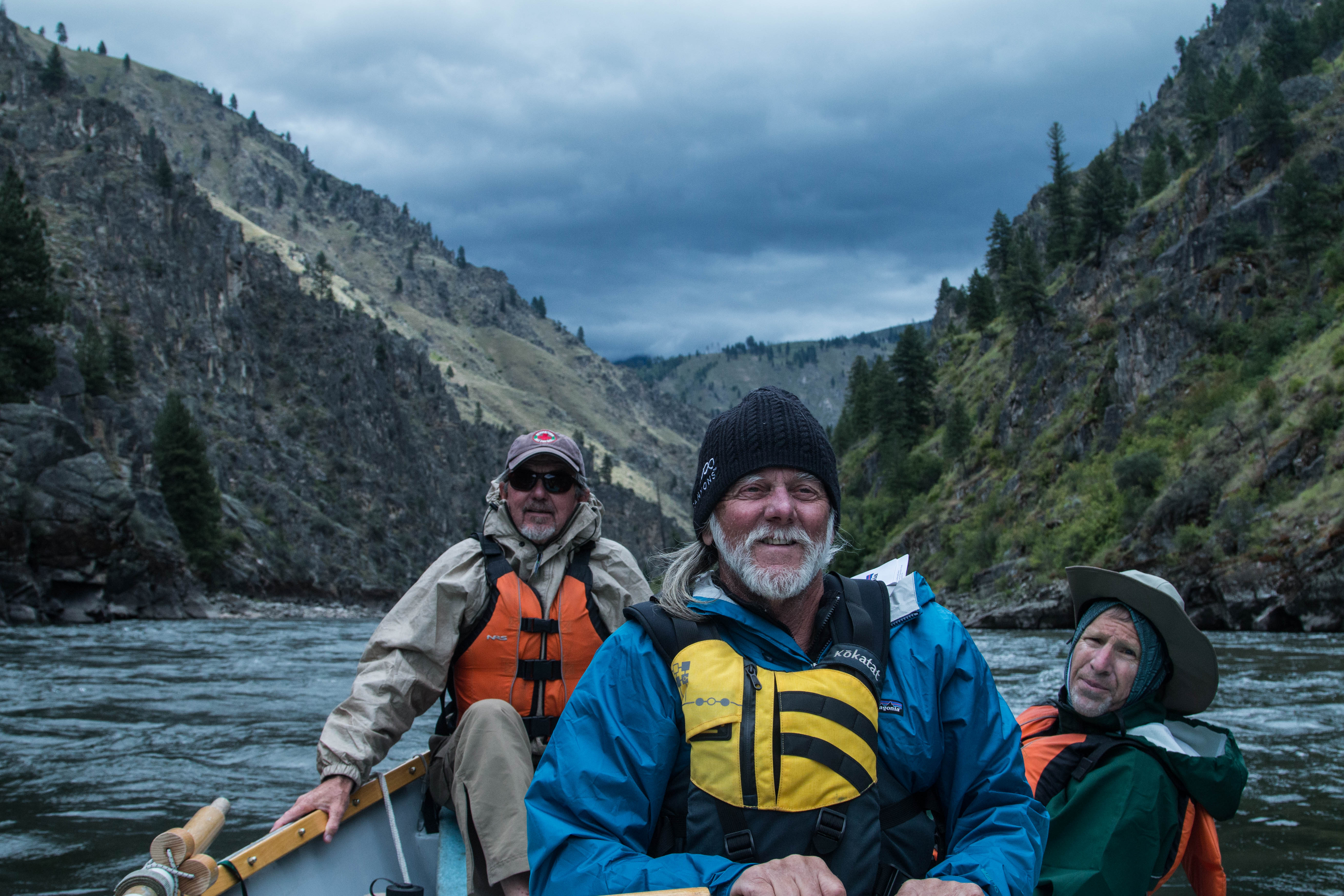 Guide Barry Dow has been rowing dories since the '70s, and riding with him through a rapid, that's obvious. He would carefully instruct us where to sit in order to balance the boat for a perfect ride through the waves—ready to order one of us to "high side," or jump to one side or the other in order to weigh the boat down and keep it from flipping. Speeding along the calm water before a drop, the tension would mount, and each time the boat would shoot perfectly straight over the waves, gracefully cutting the crests and rolling through. 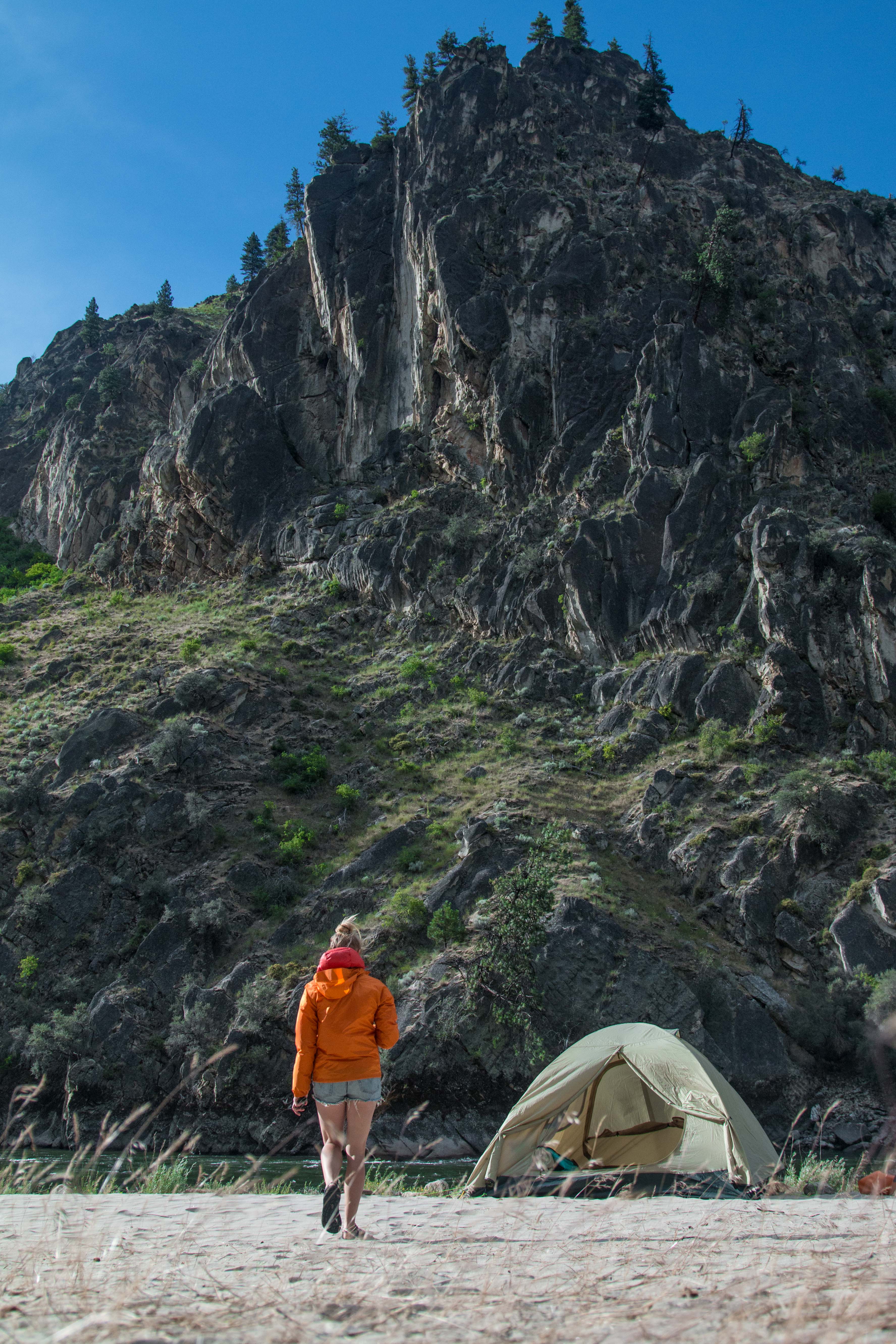 We camped at Mann Creek the fourth night of the trip, after the one cool and stormy day on the river. Only seeing a couple of other parties in the river, we begin to realize how vast an expanse of wilderness stretched around us in every direction. The Main Salmon River runs through the Frank Church-River Of No Return Wilderness, one of the largest intact wilderness areas on the Lower 48. The quiet feeling of "away-ness" I felt there made it an adjustment to go back into my daily life, but also somehow makes that daily life a bit more survivable. 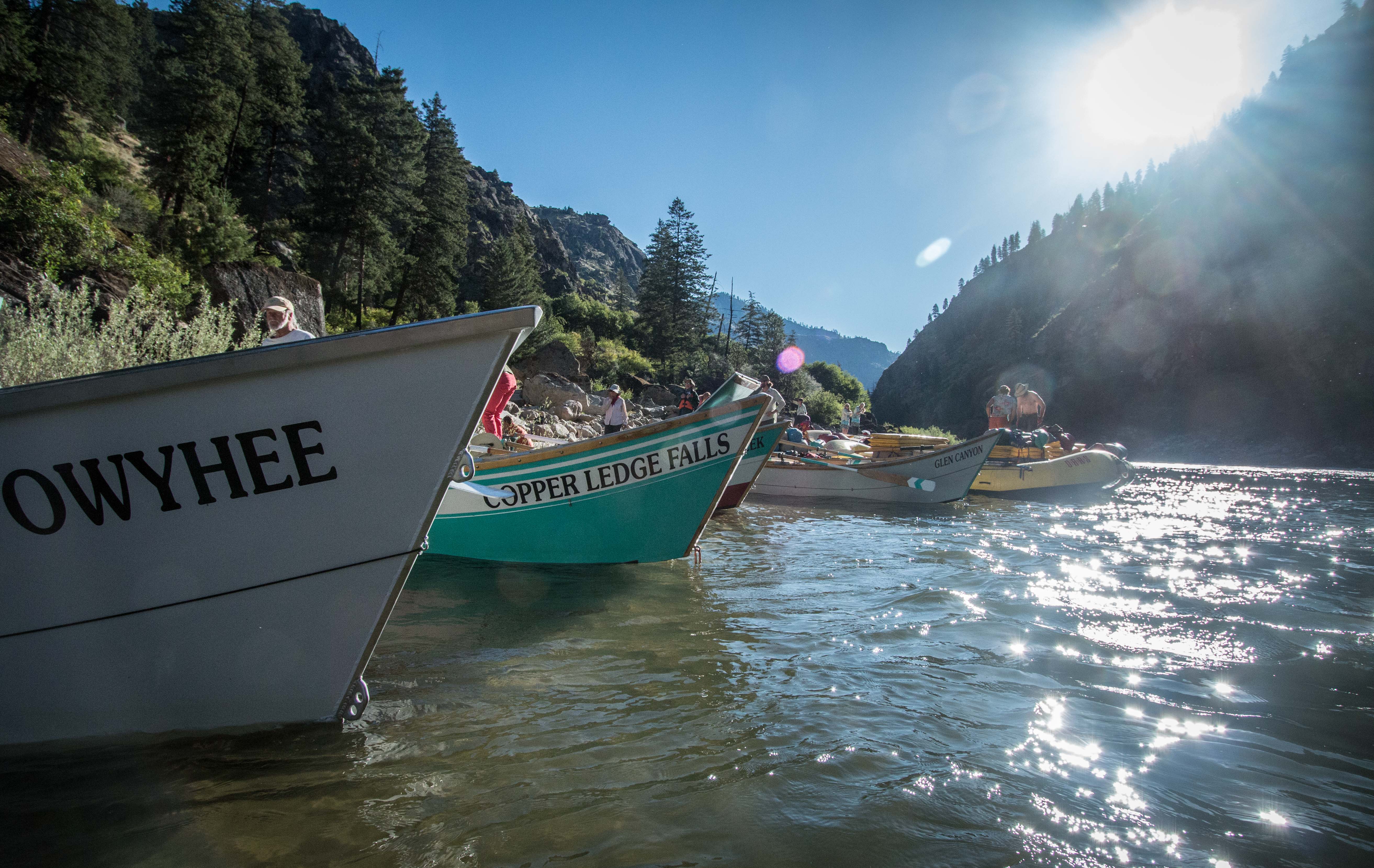 OARS carries on the legacy of dory pioneer Martin Litton by naming dory boats after special natural places that have been somehow mamed or destroyed by humans. Each boat is hand painted. The Owyhee here is new to the fleet, and made of aluminum instead of wood. It's also a bit larger than the others. It's still awaiting its paint job. 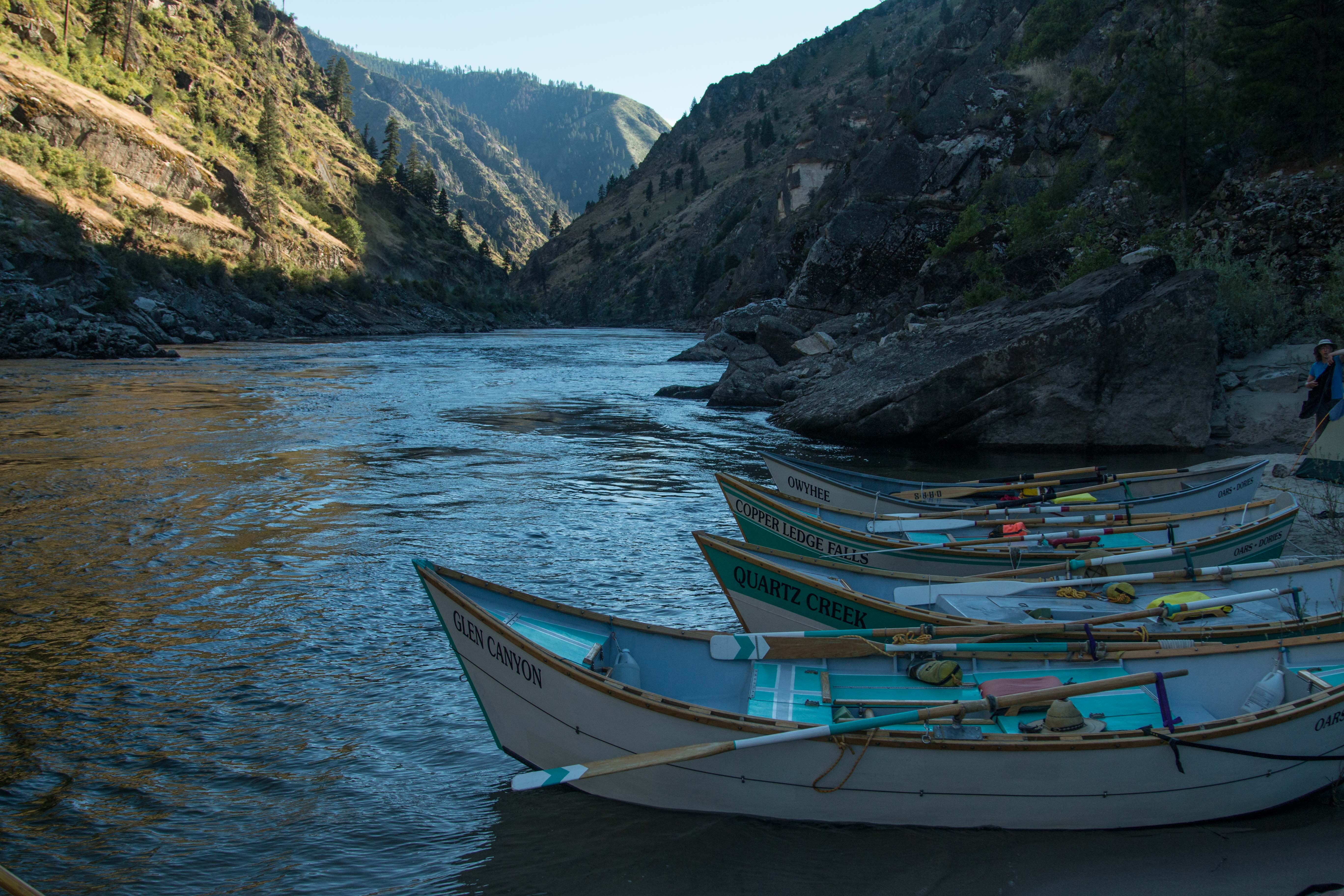 Morning light glimmers on the river, the last day of the trip.