Late last summer Dirty, Charlie the Bikemonger, and I made a journey to Iceland to attempt a north-south traverse of the lonely North Atlantic island. And we haven’t made much mention of the expedition. It would be easy to say that life is busy, finding time to pen anything meaningful is hard—which it is—or there’s simply too much to say—which there is. But the truth is, at least for me, the true gravity of the experience took time to sink in. For a while after returning from the trip, I couldn’t help but spew story after story while sharing pictures. But only recently was I able to recognize a theme: constant change.

Iceland itself is a constantly changing geography set between two diverging continental plates—volcanoes, flooding rivers, earthquakes, glacial movement. It’s the perfect backdrop. From the very beginning we swapped plans on the correct bikes to bring. First it was full suspension 650b’s. Wait, no, maybe we could tour it all on single speeds? Ahhh shit, we need fat bikes! They’ll float through all those river crossings, right? Borealis came through with a couple of Echos for us to demo. Carbon fibers float, don’t they?

Next we needed a route. Dirty had been in contact with a couple local guides and was picking their brains for beta. We were provided with a gpx file containing a 95 percent singletrack route across the island. I turned that into maps and set about making it usable on the ground. Just as things were starting to fall into place, we got an email from one of the guides which essentially read: “I’m on the Highlands trail right now in my 4×4, literal feet of slushy snow. It’s not passable on bike. Strike up Plan B.” Okay, we got this. Fortunately, I had been researching alternate dirt roads in case we needed to strike up plans C, D, and E. I identified a gravel road path that would lead us south from Akureyri up a valley into the Highlands and then skirt us along the western edge of the Vatnajökull glacier. All is not lost. We had penciled in time on other prime singletrack anyway. We could afford a practical detour. Then one day at work, I receive an instant message:

Less than a week before we were to leave the States, a giant sub-glacial volcano decided to get sassy. Thousands of little earthquakes per day, and magma was on the move. The potential for a violent surface eruption was low, but the risk of a Jökulhlaup (sub-glacial outburst flooding) was extraordinarily high. And it was literally in our path. 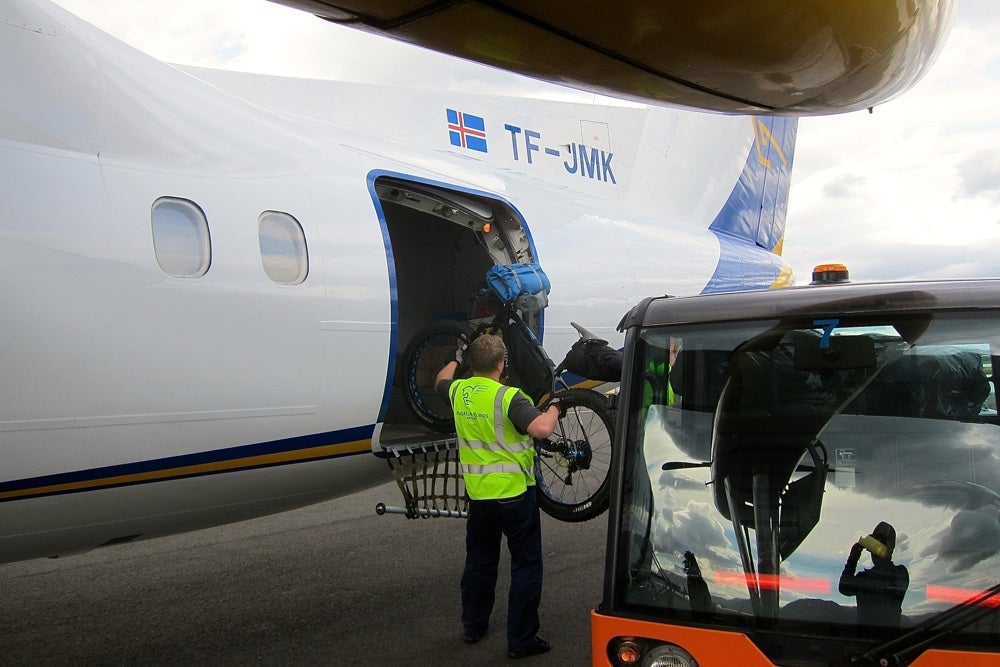 No case or fee required. 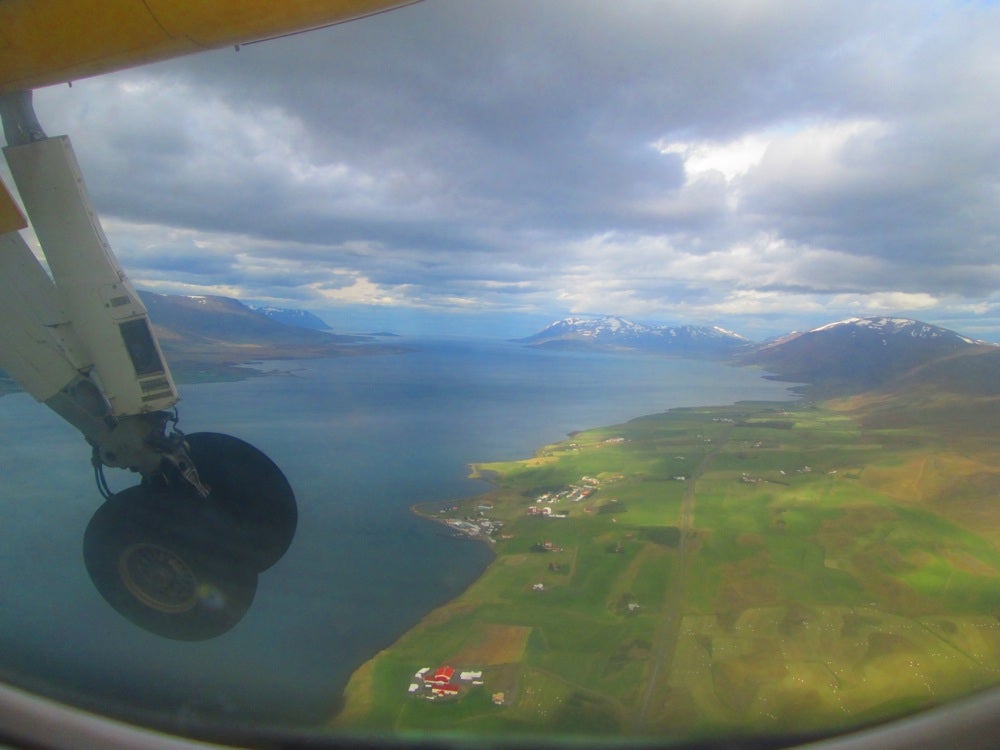 On approach to Akureyri.

We opted to play it by ear and assess the situation once we put wheels on the ground. After landing in Reykjavik and rendezvousing with Charlie, we hopped a prop flight to the northern coast town of Akureyri. We rolled into the first pub we could find and started asking questions. And within 10 minutes we’re being called “f*%&$ crazy” by a group of young lads who had spent their day filming a stunt commercial for Red Bull. Irony? Not only because entire roads had been closed due to the volcanic activity, but also “…tourists go into the Highlands all the time. We hear about them in the newspapers each year.” 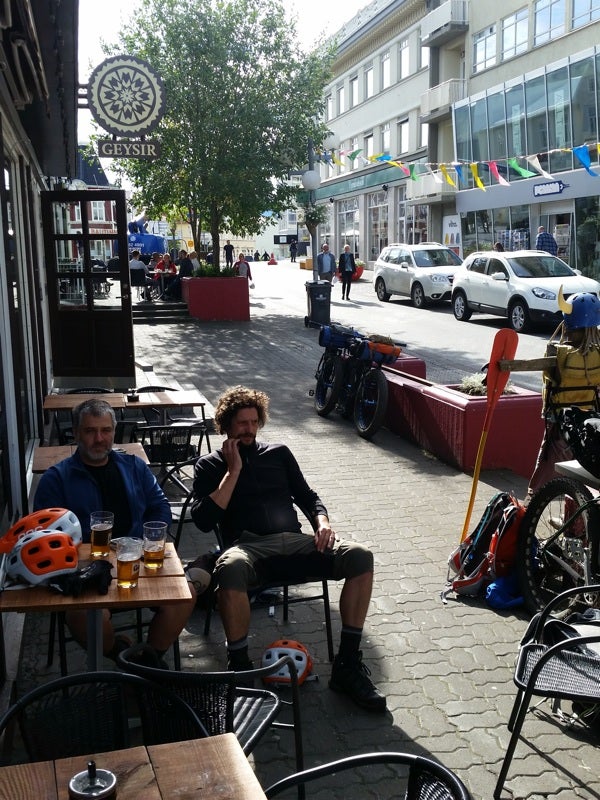 This patio was hard to shove off from. 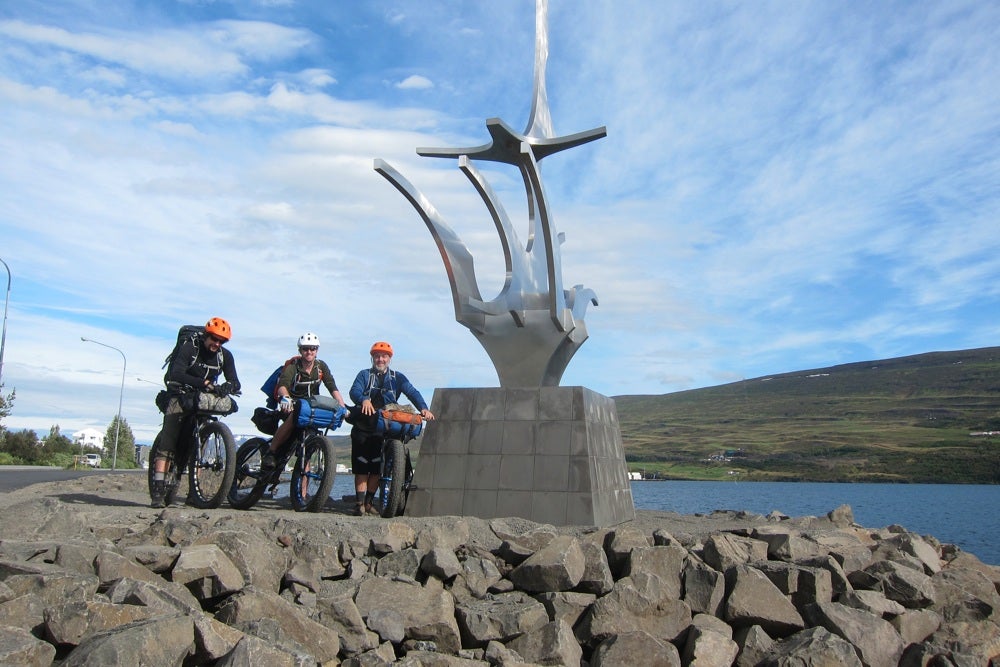 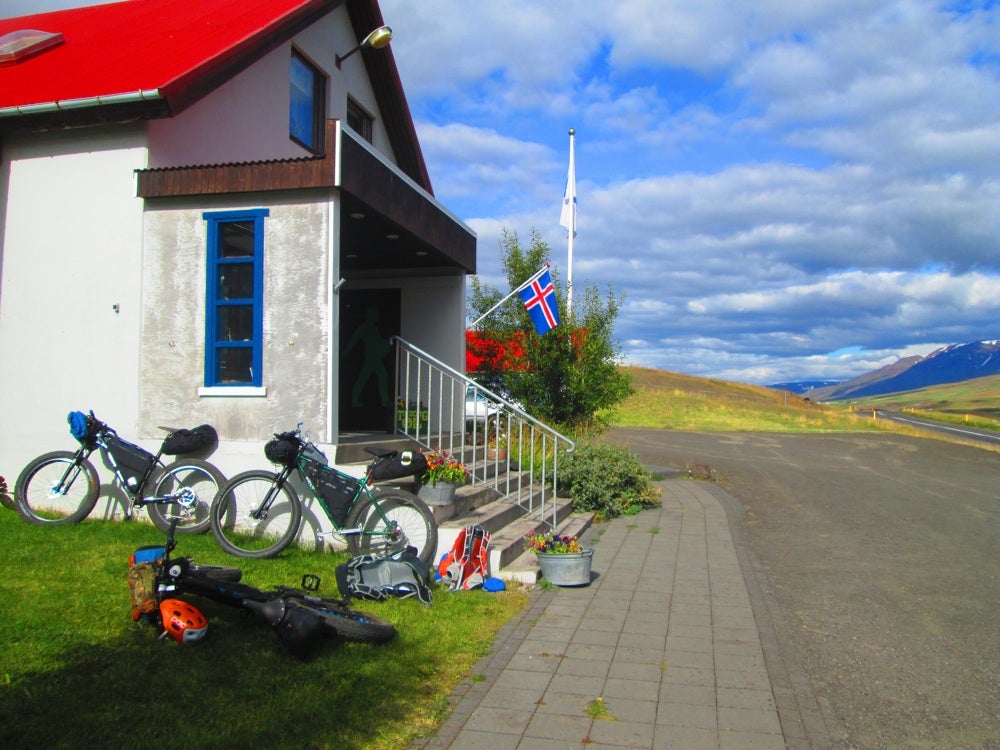 Last bit of civilization for days. You don’t pass on chocolate waffles from local old ladies.

We pedaled south from Akureyri, gradually climbing through a lush river valley that would eventually lead us up into the Highlands. Originally we had high hopes of making it to a hut located at a hot spring before dark. But a late start from the pub and the aroma of chocolaty dessert waffles from a roadside inn had us behind schedule. Not that we had a strict itinerary at this point, really. Deep in the valley it was getting dark quickly, so we opted for a flat spot next to some giant boulders. It was our only real shot at a wind break to cook and sleep. They didn’t do much good, but fortunately our Big Agnes Copper Spur tents withstood the wind and allowed us to prep food inside. 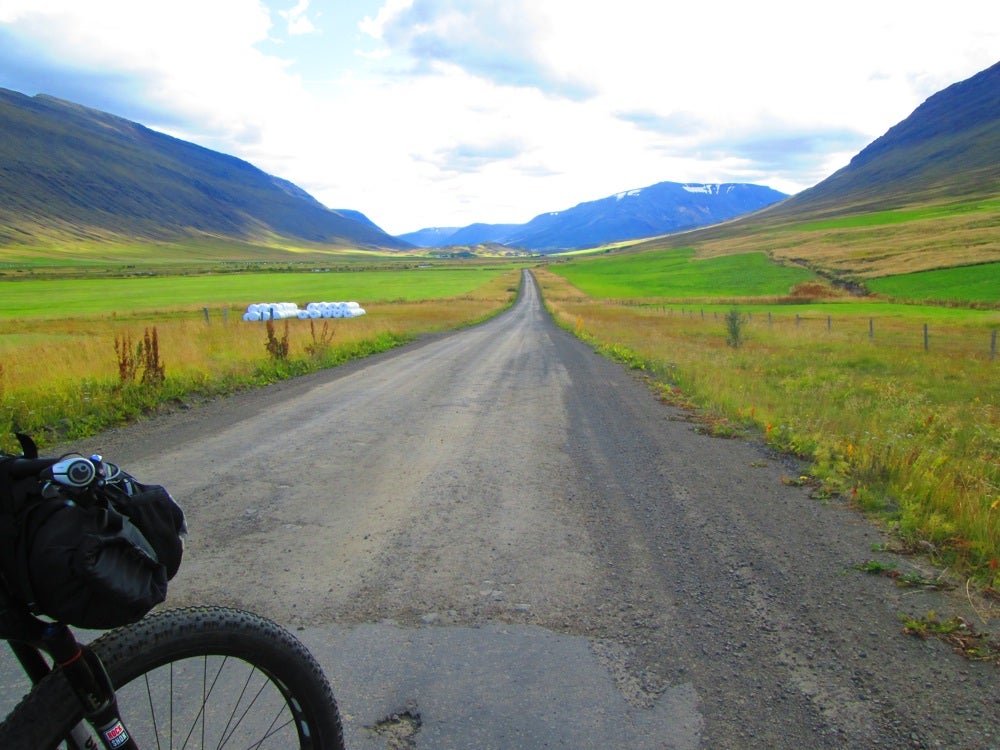 End of the pavement rolling south. 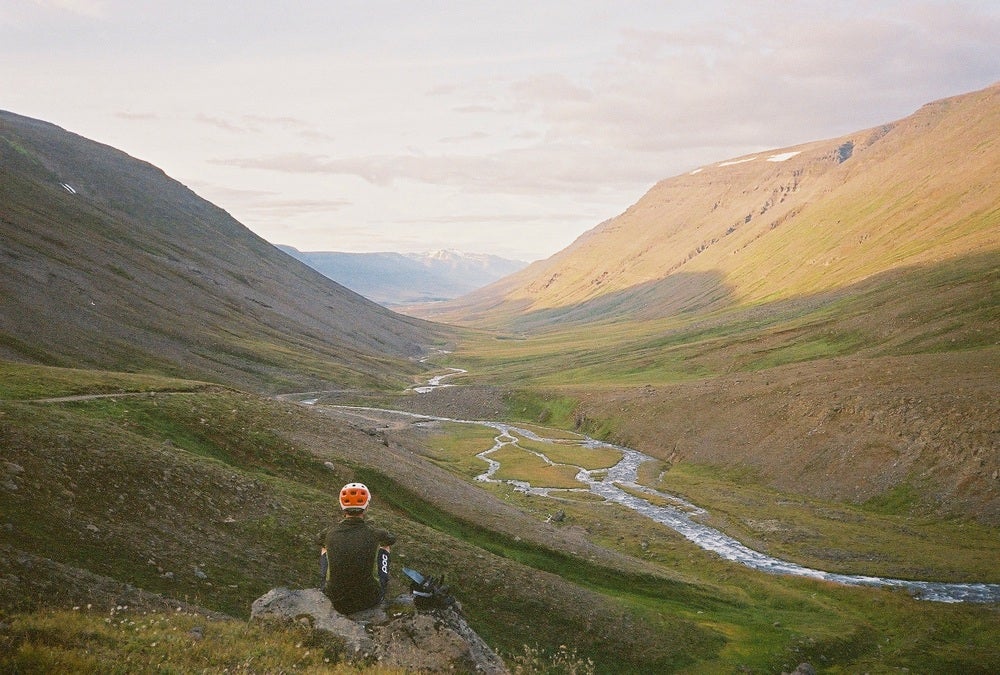 The view was well worth the climb. It usually is. 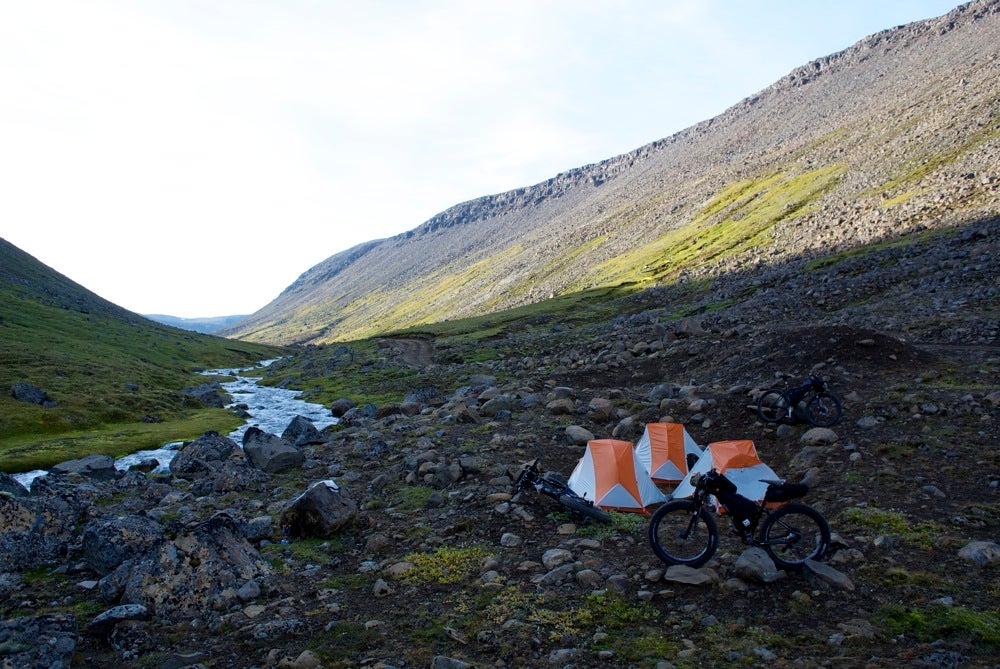 We looked hard for a way to hide from the wind. No luck.

After a blustery night in the valley, we pushed on to the plateau where we’d enter the much-anticipated Highlands. So far we’d been blessed with fantastic weather; 22°C in town with a light breeze. I knew we were getting lucky when it continued the second day. However our attention to the weather was soon diverted to the change in landscapes. In a matter of 10 kilometers the scenery changed from alpine river flora to volcanic cinder and moonscapes. 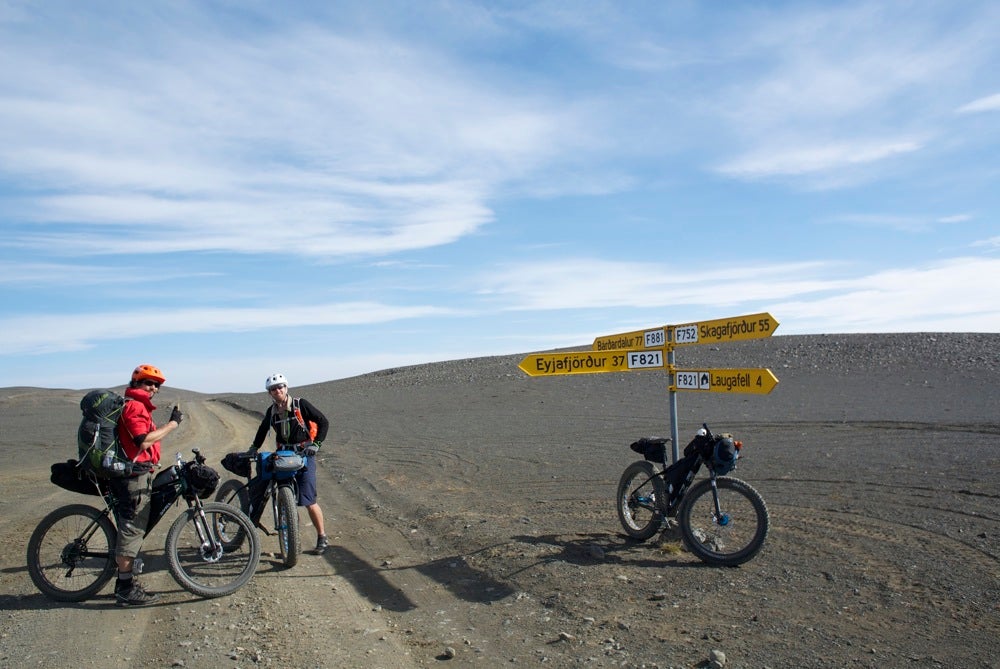 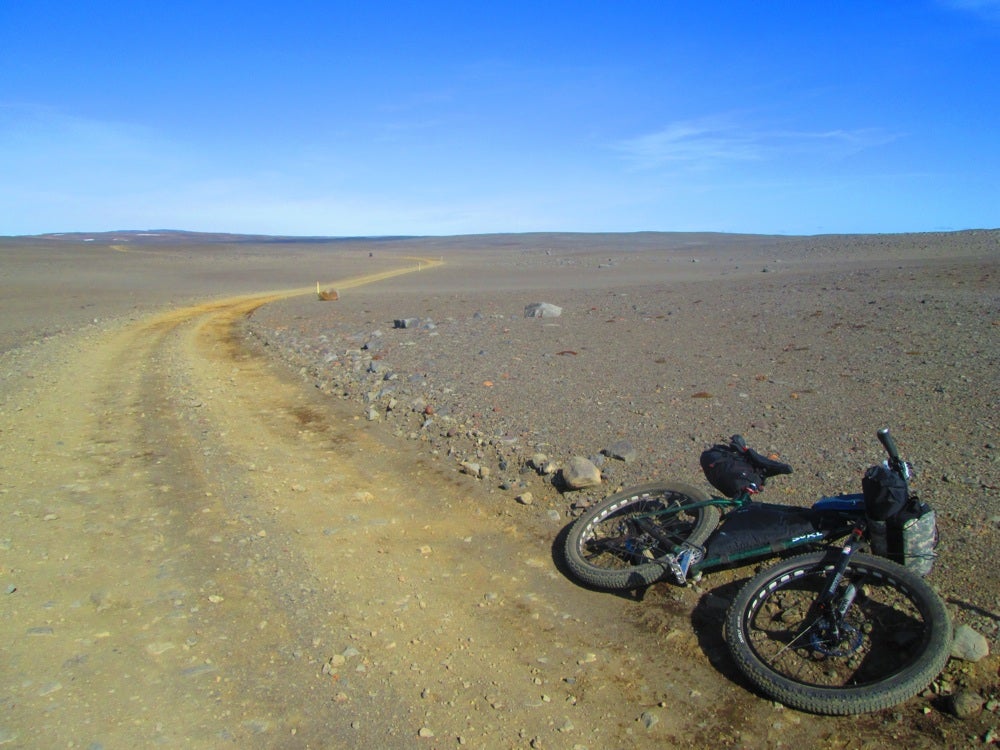 I had never experienced anything so devoid of life. No plants or weeds, no bugs or insects, certainly no wildlife, no fresh water, no signs of life in any form. Just a dirt road meandering through hundreds of miles of volcanic rock and cinder, save for a handful of oasis like hot springs. The first of which was Laugafell, and it offered a nice reward for a day's worth of climbing. 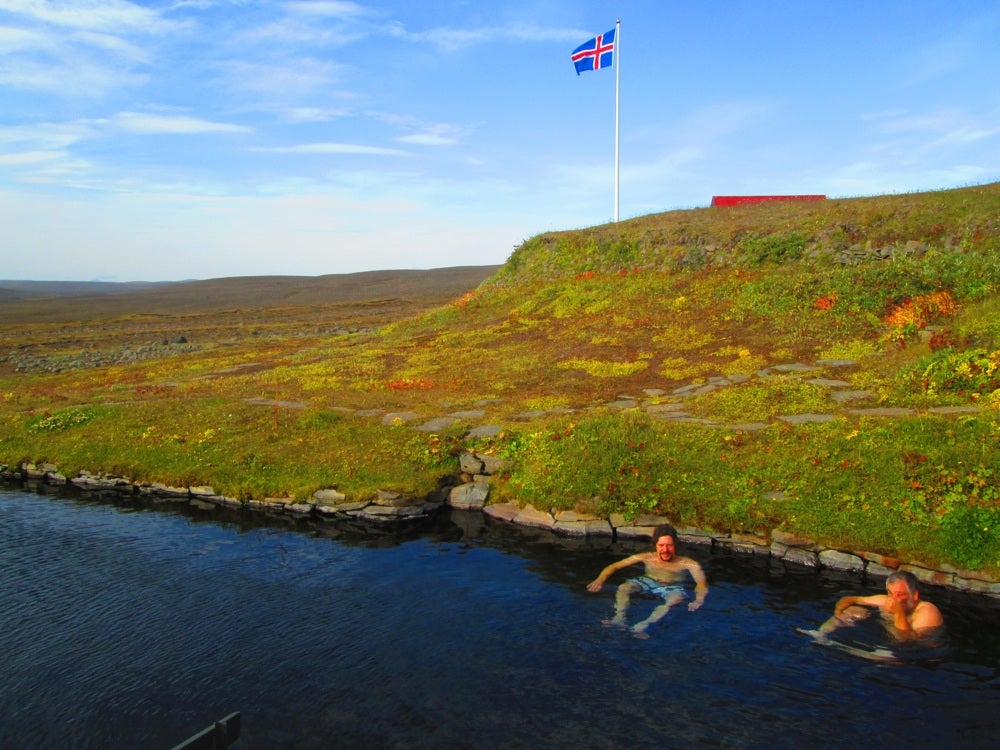 We stayed at Laugafell for what ended up being too long. But the novelty of the geothermal pool and the presence of our Platypus bladder of scotch (i.e. Partypus) was too much. Charlie probably shouldn’t have had a soak at all. He had been complaining of a mounting head cold for a couple days. Coupled with some booze and hot water to get things moving, shortly after drying off he was in rough shape and napping on the ground. Not a good situation at 4 p.m. with 60 kilometers left to pedal. But in the face of not having made a ton of progress, and at the risk of getting set back an entire day we rolled on. 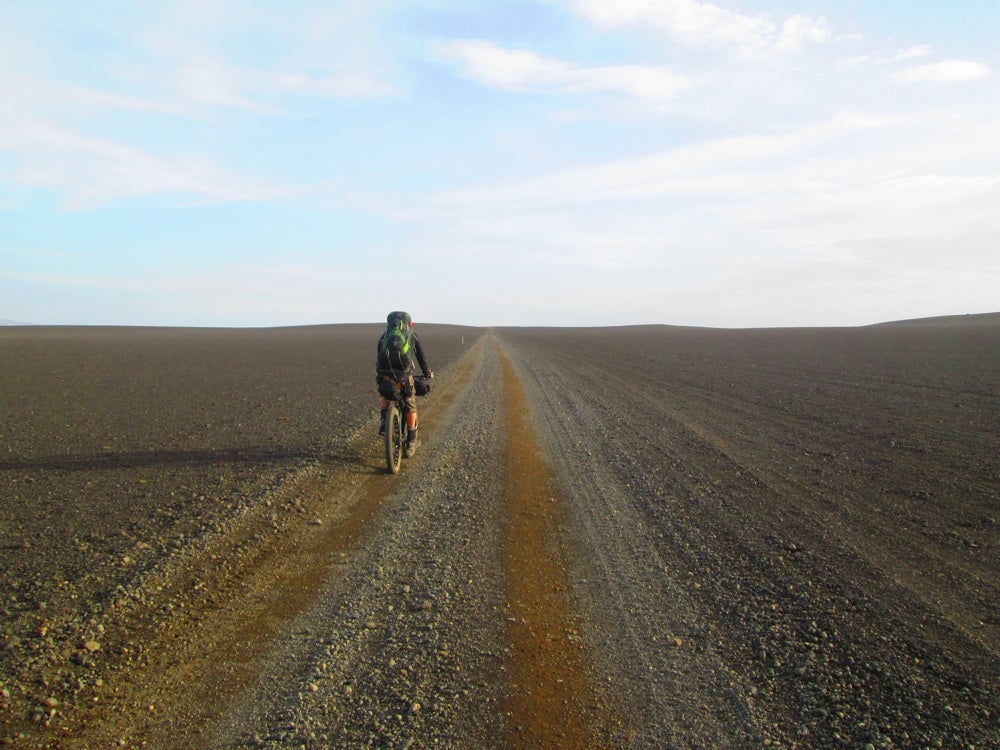 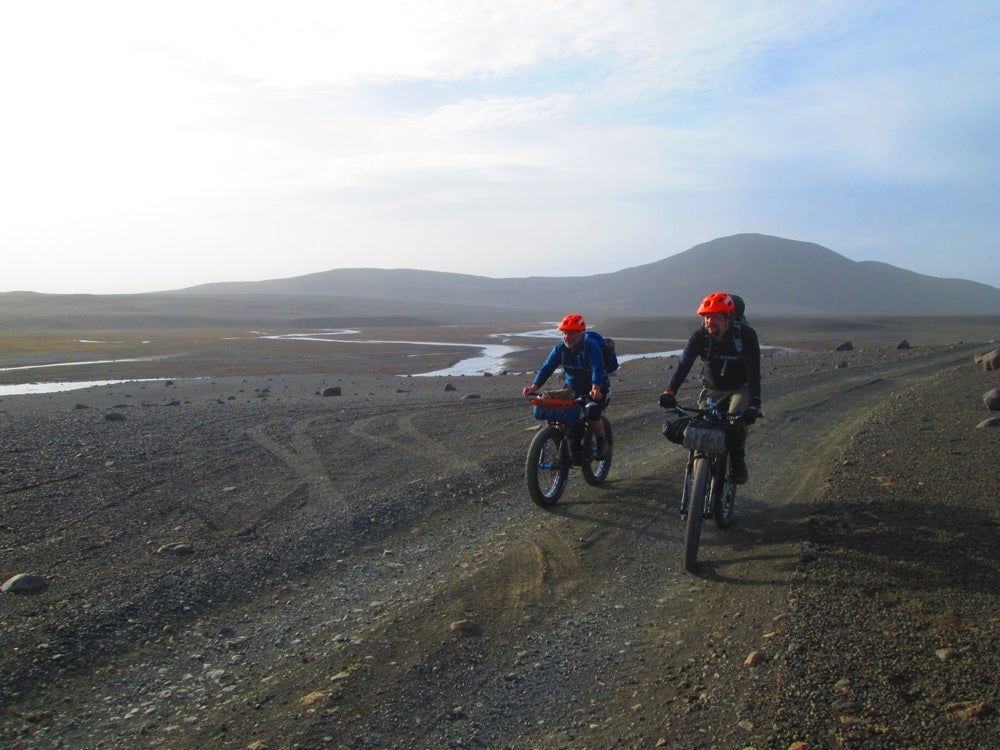 Settling in for the evening

As the day wore on, we were in awe of the continuing vastness of the landscape. It had changed so quickly upon exiting the river valley, and now it just went on forever. The realization that this was going to be our view for the next four days was somewhat surreal. The glaciers in the distance were so massive and never seemed to get any closer. Judging distance and progress was very difficult. As the miles accumulated, so did the river crossings. And the various ways we dealt with them. Do you stop to put on the water gear and then change back every time? Or do you just trudge through and risk spending the remaining miles in wet everything? Time vs. comfort? Fortunately none were so big that we had to swim and/or float the bikes across. 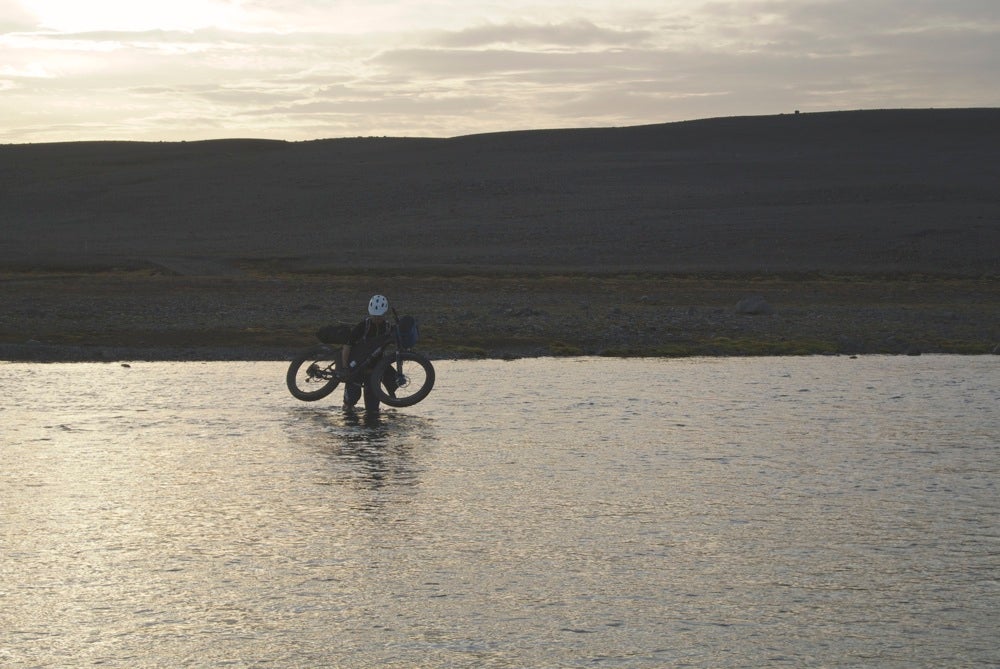 One of many chilly crossings.

As evening approached we started to get separated, all three of us riding at different paces. Charlie’s head cold was wearing him down and slowing his pace. Dirty was on his self-described “all day pace,” just letting his knees fall on the pedals. And I was trying to slinky between the two of them. We had no radios or way to communicate if anything were to happen. We gradually turned due south and into the shadow of Vatnajökull, Iceland’s largest glacier. And the one with Bárðarbunga, the active volcano, right underneath it. The road was paralleling a large glacial river. And I couldn’t help but think of the jokulhaups I mentioned earlier. I knew the odds were pretty low, but that thing is big. And intimidating, given the circumstances. Through this section I decided to pull out the headphones and listen to some local tunes. I’d been familiar with Sigur Rós before the trip and thought it would be neat to experience the music in their landscape. There was something oddly calming about the ghostly vocals.

Charlie’s energy was wearing thin, and he kept commenting that we should stop and camp where we were. About 20 kilometers short of our target camp site at a hut with running water. We were separated from Dirty—who had the Jetboil stove—low on water with no source to refill from, and no wind break that the hut would provide. Sorry buddy, we’re going to keep moving. Which would prove to be a pivotal decision three days later.
It had been getting dark for hours, the most drawn out sunset I’d ever witnessed. Being late September, the sun did fully set below the horizon for a few hours a night. But it didn’t actually get dark until 11 p.m. What little light was left helped us across the last river crossing. Which happened to be at the junction of two dirt roads, one of which led to the area where Bárðarbunga was rumbling. 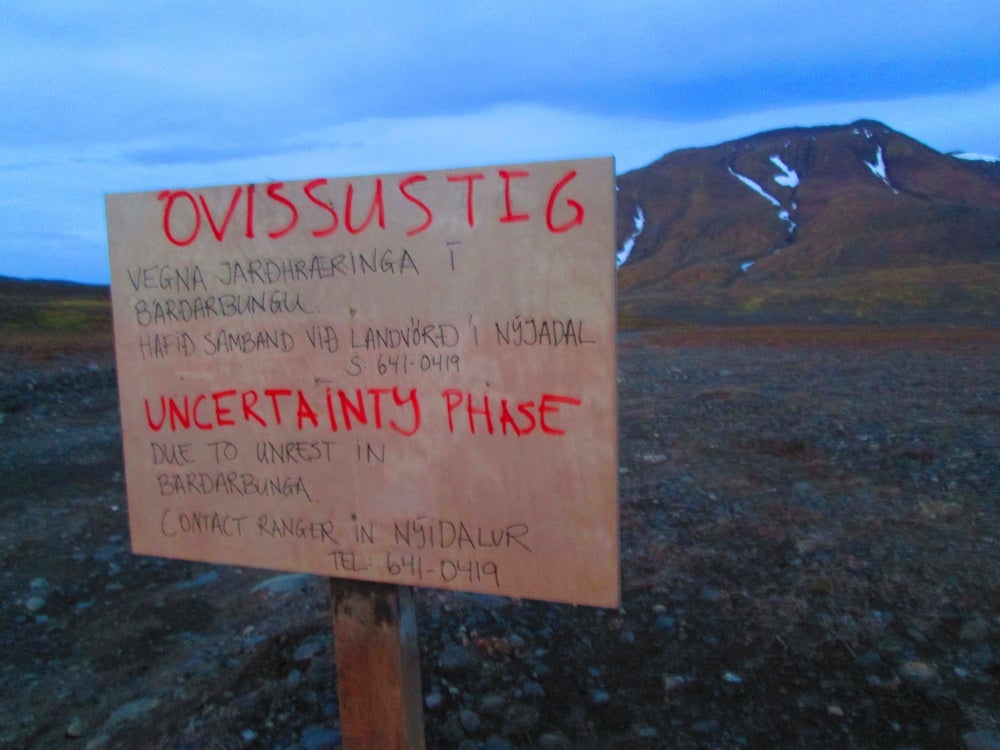 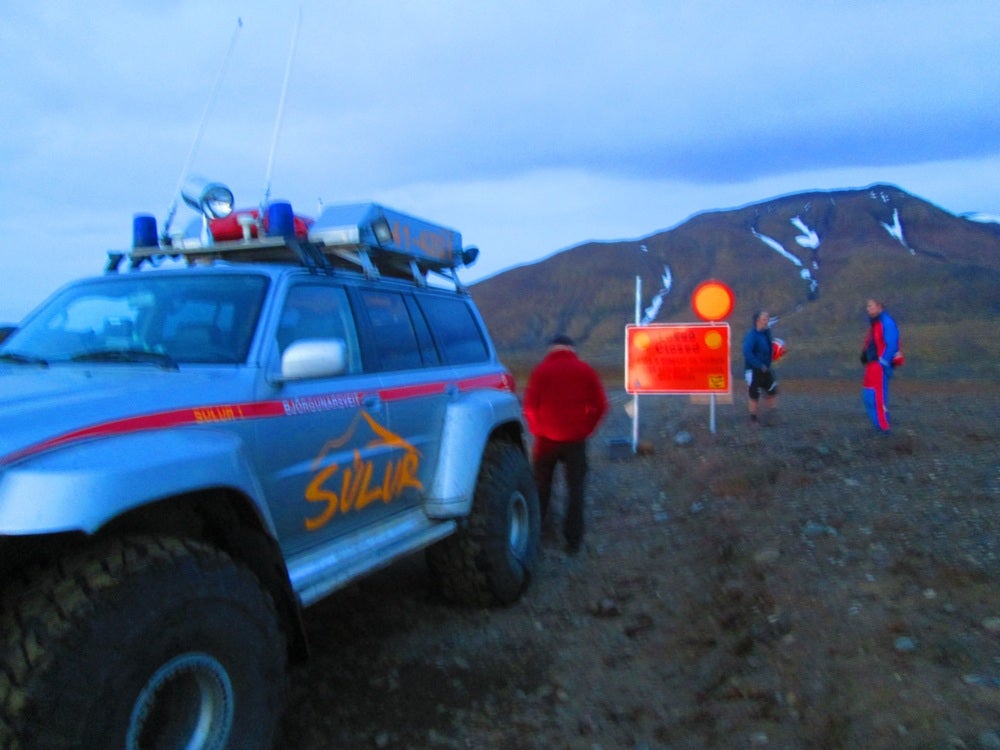 The rangers there don’t mess around with road closures.

Another 5 kilometers down the road, we finally reached the hut we’d been aiming to camp at, providing us a wind break and some fresh water. All the rivers we crossed had been filled with glacial sediment, too calcified to filter. Charlie needed sleep so badly I don’t think he even removed his chamois before lying down. Dirty and I had to literally drag him from the tent and force him to eat. A ranger at the last river crossing told us it would be a clear sky that night, good chance to see the aurora borealis. So we sat on a wooden plank and sipped some cocktails while waiting for the ambient twilight to fade. There was still some scotch left, we’d mooched a couple cans of Gull from some hikers, and Pat’s Backcountry Beverages had provided us some portable IPA from home.

Once in the tents for the night, we each left the rain fly open to catch the aurora if they were to make an appearance. Within an hour the eastern horizon began to glow white. Which is odd for 12 a.m. That glow soon turned into a white arc across the sky, and then similar white bands started to drip down from it. I mumbled to Dirty asking if he was seeing this, and I heard a flurry of zippers from next door and then a hushed “oh, oh holy $%#&.” The whole scene shifted shape and brightness several times over the course of 30 to 40 minutes before fading away. It was quite the high note finale for a day with numerous peaks and valleys. Literally and figuratively.

This post originally appeared on DrunkCyclist.com, which is quite possibly maybe NSFW for sure.