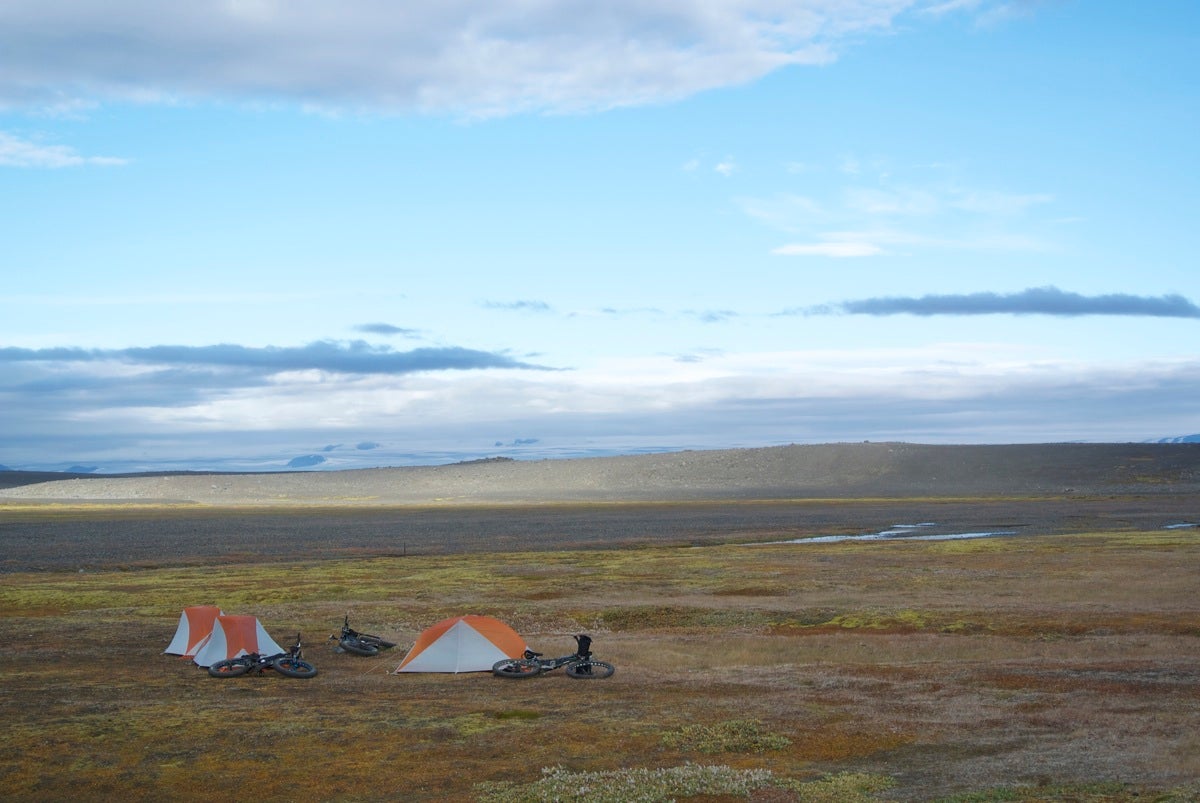 Last we left off, Dirty, Charlie, and I had ridden through a long second day of our journey across Iceland. After making it to the hut in time to eat, get drunk and see the northern lights, we awoke to another surprisingly blue horizon and more washboard track ahead. After everything we’d been told about the unpredictable weather in Iceland, it was truly amazing we’d borrowed the sun for that many days.

The goal for day three was relatively tame: just tick off miles and enjoy the scene. No major climbing or treacherous rivers to cross—that we knew of. 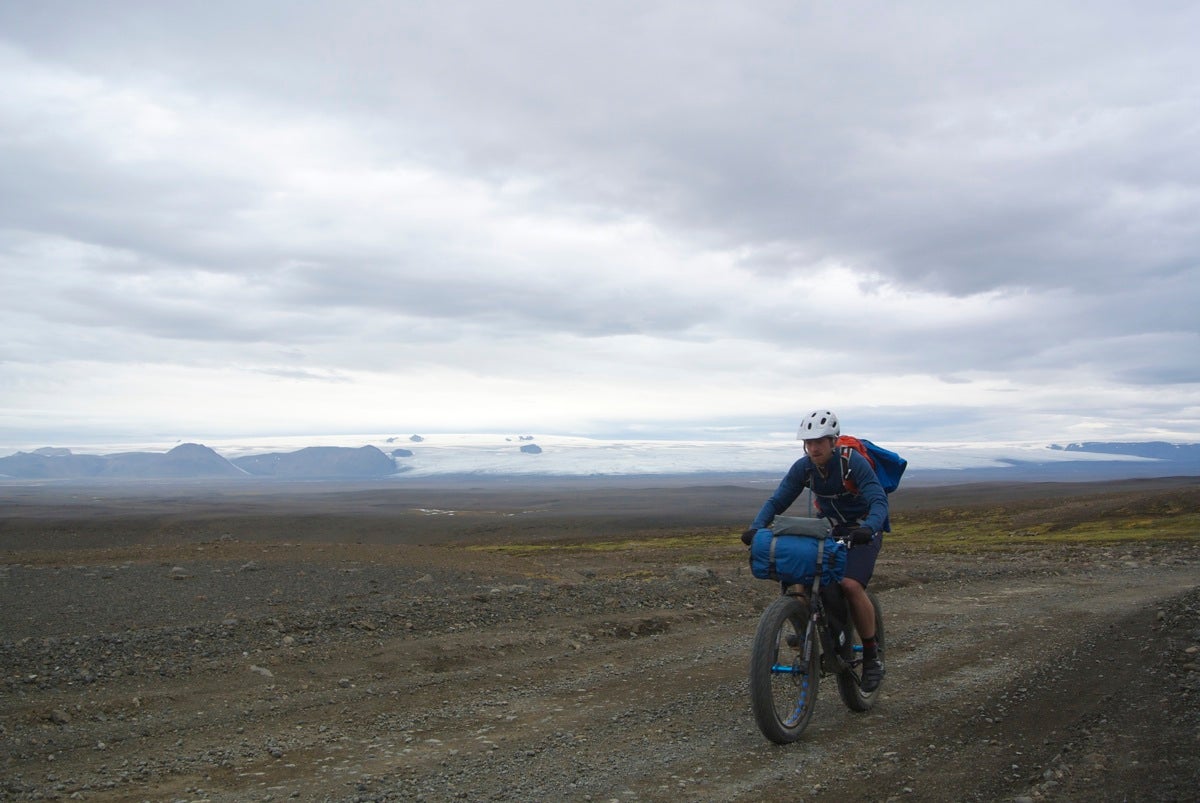 That’s ice in the background.

After several hours, we began to encounter some vehicular traffic on the road. Mostly large 4×4 buses of tourists. We rather enjoyed some of the looks we received through the windows. The road was nothing too rough, but they had ridden for several hours on a bus. And here were three chaps drinking from flasks and tooling around in the middle of nowhere.

Maybe halfway through the day, we came to a junction and the maps said we had an option. Continue on the same road with the mounting traffic, or peel west slightly and go around a couple lakes. We opted for the scenic route away from the buses. This took us up a steady climb to a high point above the lakes. We could see a long descent ahead of us so we stopped to have some lunch, coffee, and once again marvel at the vastness. 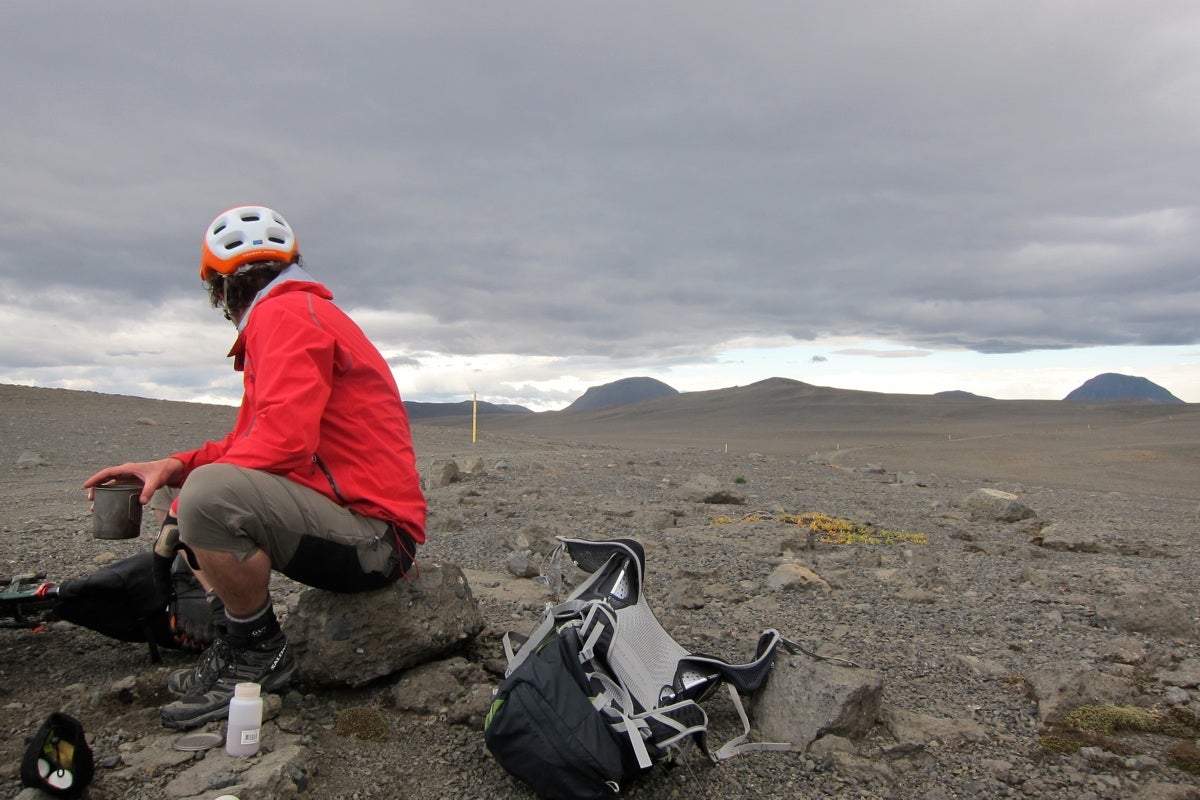 Coffee on the moon.

Our detour wasn’t quite as flat as it had looked on the map. But the winds were calm, and the rain was only coming in waves of drizzle.

We reached a point where we started to anticipate the sighting of our next checkpoint. According to our maps there was a tiny seasonal hut just around the bend. Or maybe the next one. We stopped at one point to gather ourselves for a last push—i.e. drink whiskey and eat Stinger waffles. Way off in the distance, near where we camped the night before, I spotted a large dark cloud. It looked as if it could be a cloud of smoke from a fire. But as we watched it floated away and dissipated. About five minutes later another dark cloud appeared in the same general area as the previous one. And again this one drifted away and dissipated. We chalked it up to shadows and the sun being low in the sky. 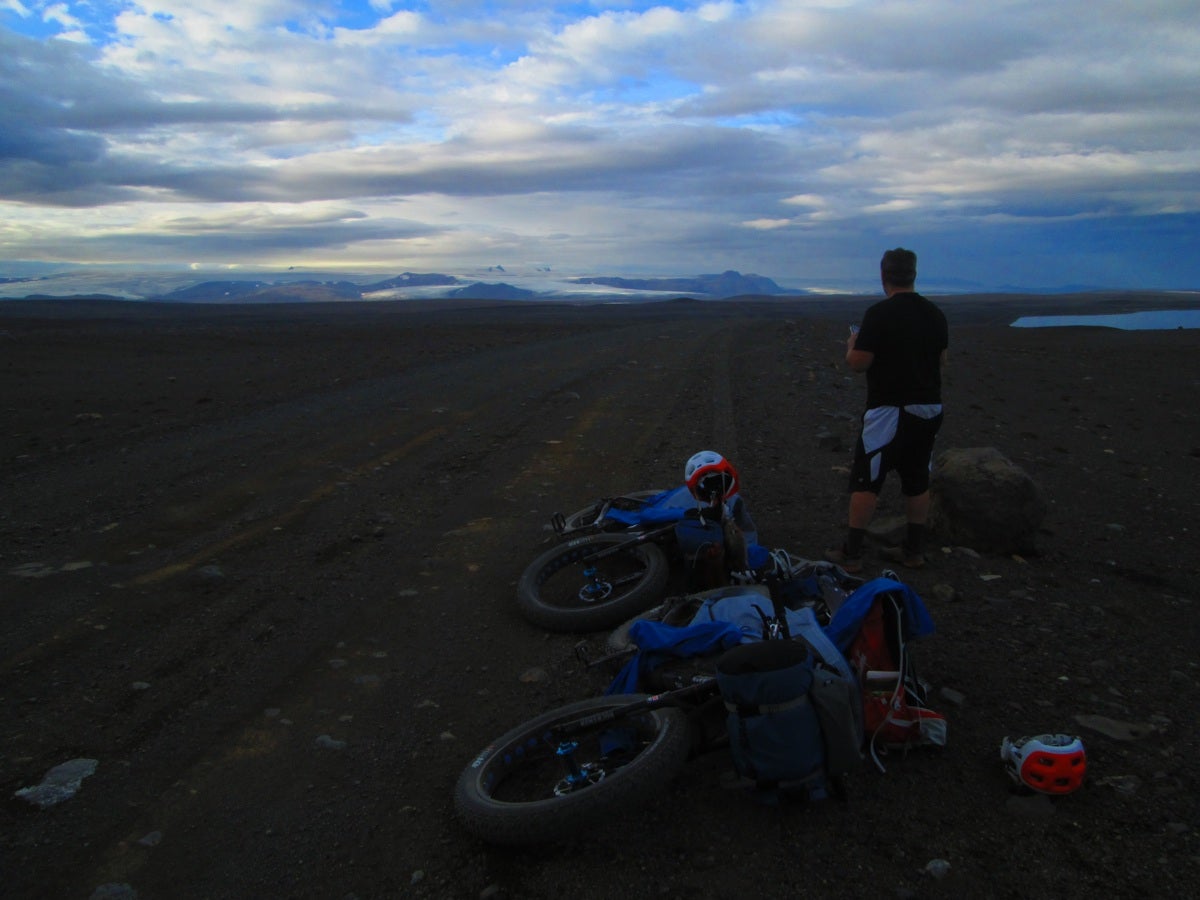 We pressed on toward the hut with the kind of anticipation that has you certain your destination will appear around every slight turn in the road. Naturally this anticipation dragged on for at least 90 minutes longer than we expected it to.

Upon reaching the hut we came to learn that it wasn’t of the public variety with pit toilets and a spigot for water. This one was private, and had been solidly closed up for the season. Being late in the summer, we assumed the nearby volcanic activity had cut their tourist season short. The whole scene had horror movie written all over it. Semi-abandoned building in the middle of nowhere. There was a river about 200 yards away, but again it was too full of glacial sediment to filter. So we opted for a horse trough that had filled with rain water. Charlie was no fan of the masses of algae and bugs, but we didn’t have much choice. We made a small fire ring and burned some materials from the trash bin in order to dry some clothes. 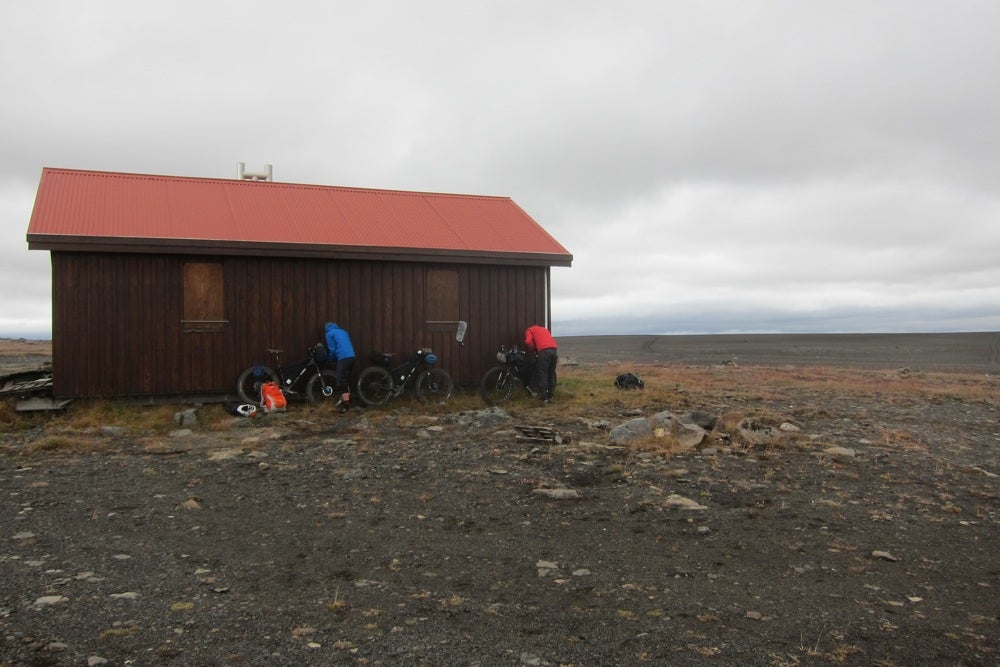 Like Deliverance, but with Björk instead of the banjo.

The next morning was the first without blue skies. It had to happen at some point. The novelty of the Highlands had worn off, and with low clouds covering the glaciers, it was a rather bleak view. 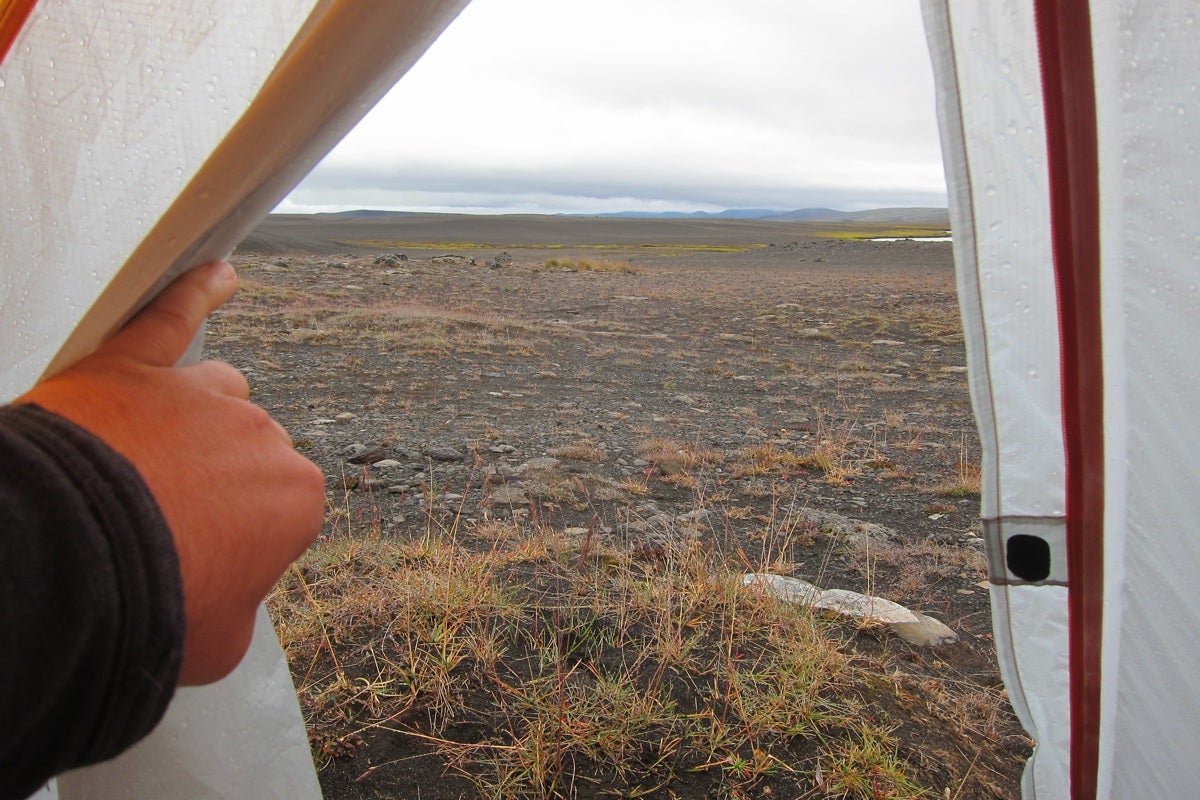 However, Charlie found his groove after finally getting a solid night’s sleep. 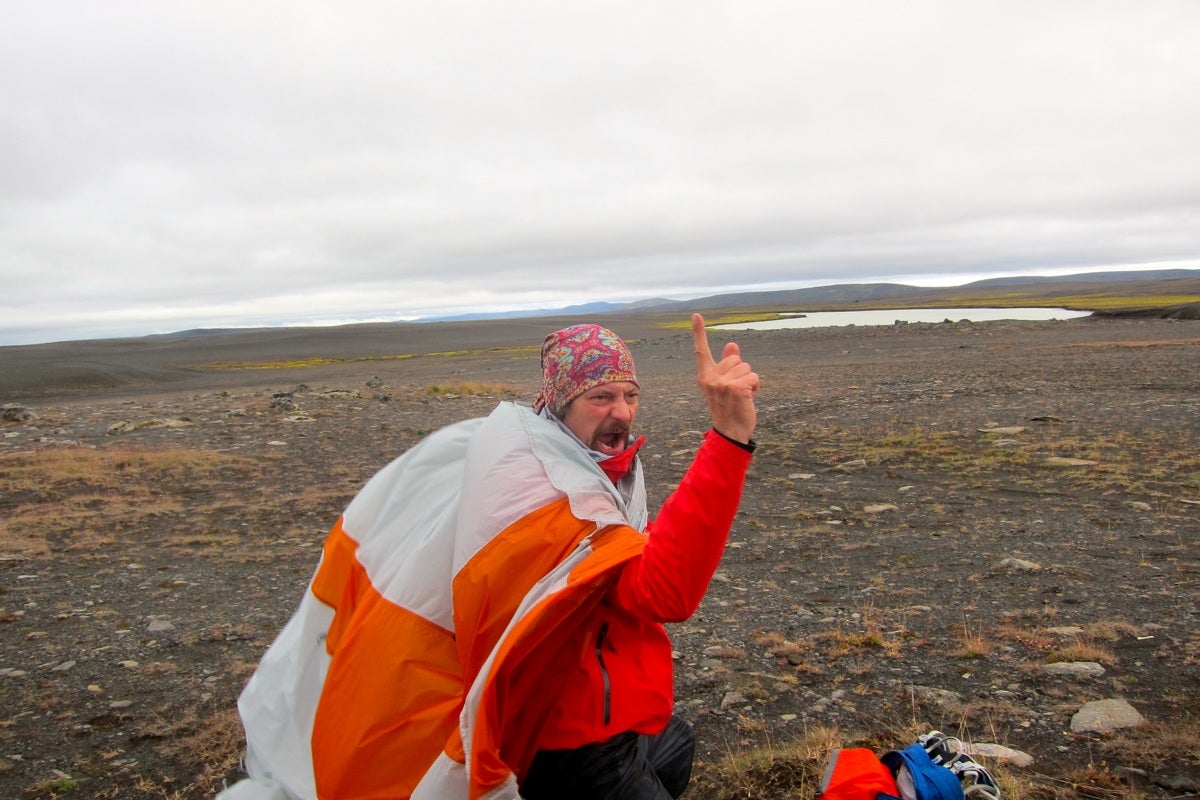 Not enough capes being worn these days.

Our goal for day four was to make it to Landmannalaugar, the first of a couple areas we’d been told had legit mountain singletrack. And this would signify our official crossing of the Highlands. As we spun further south we passed more and more vehicles. A sign of civilization. At one point we stopped and chatted with a couple police officers in an SUV. They seemed a bit concerned with our presence and informed us of a big storm coming through. We told them we were headed to Landmannalaugar and planned to spend the next day there. So we could ride out the storm if necessary.

The dirt road got smoother and we could start to see serious mountains in the distance. HELL. YEAH. Passing turquoise lakes and seeing green mountains had us in awe of the scenery again. The weather ahead looked rough, but we’d made it through the most exposed part of the country in fine form. Stoke was high and the road had us coasting downhill for miles. We reached a T intersection where the road turned to pavement once again. To the left, 30 kilometers to Landmannalaugar. To the right, 10 kilometers to food and supplies, according to the road sign. The thought of a cold beer and hot food was too much and strayed us from our original goal. But it was only 10 kilometers, no big stretch. 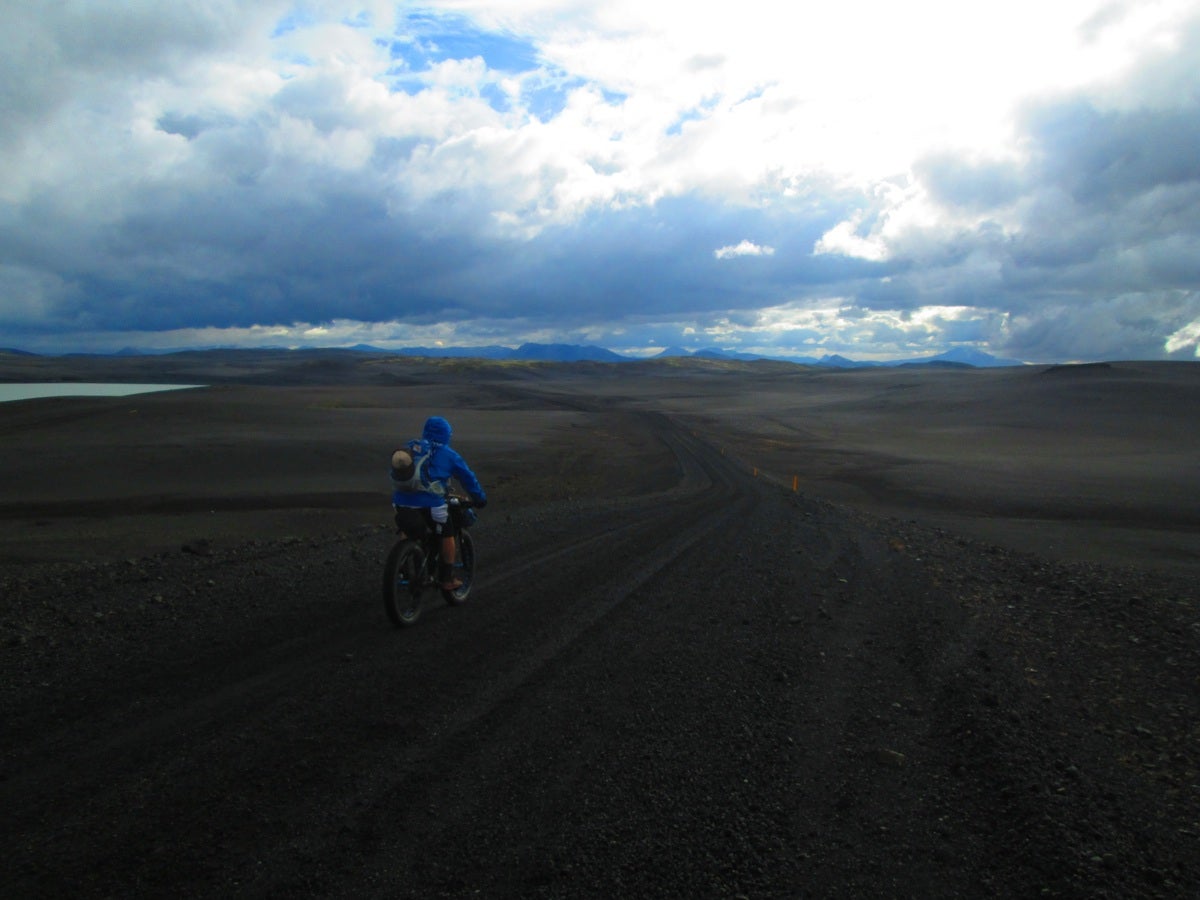 We arrived at the equivalent of a truck stop/hostel. Hrauneyjar. Beer in the fridge and dining room with a kitchen. We’d only been away from civilization for four days, but this was a glorious sight. While eating a simple yet fantastic three course lamb dinner we shot the shit with Inky, the owner. He was impressed with our journey so far and exclaimed of the beauty we’d yet to find in Landmannalaugar. He also informed us that as it turns out, the volcano had erupted. Two nights earlier. While we were sleeping next to it. Only a fissure eruption, but those black clouds we saw the day before were smoke nonetheless. However, when we told him we planned to push on after dinner, he became very serious.

Inky: “I cannot let you go. Large storm will be moving in.”
Us: “It’s alright, we’ve got lots of supplies and ample gear. We’ll get there tonight and ride it out tomorrow.”
Inky: “No, I will not let you continue. This storm is much too strong.”

Come to learn that when Icelanders refer to a big storm, it occasionally can be a literal hurricane. 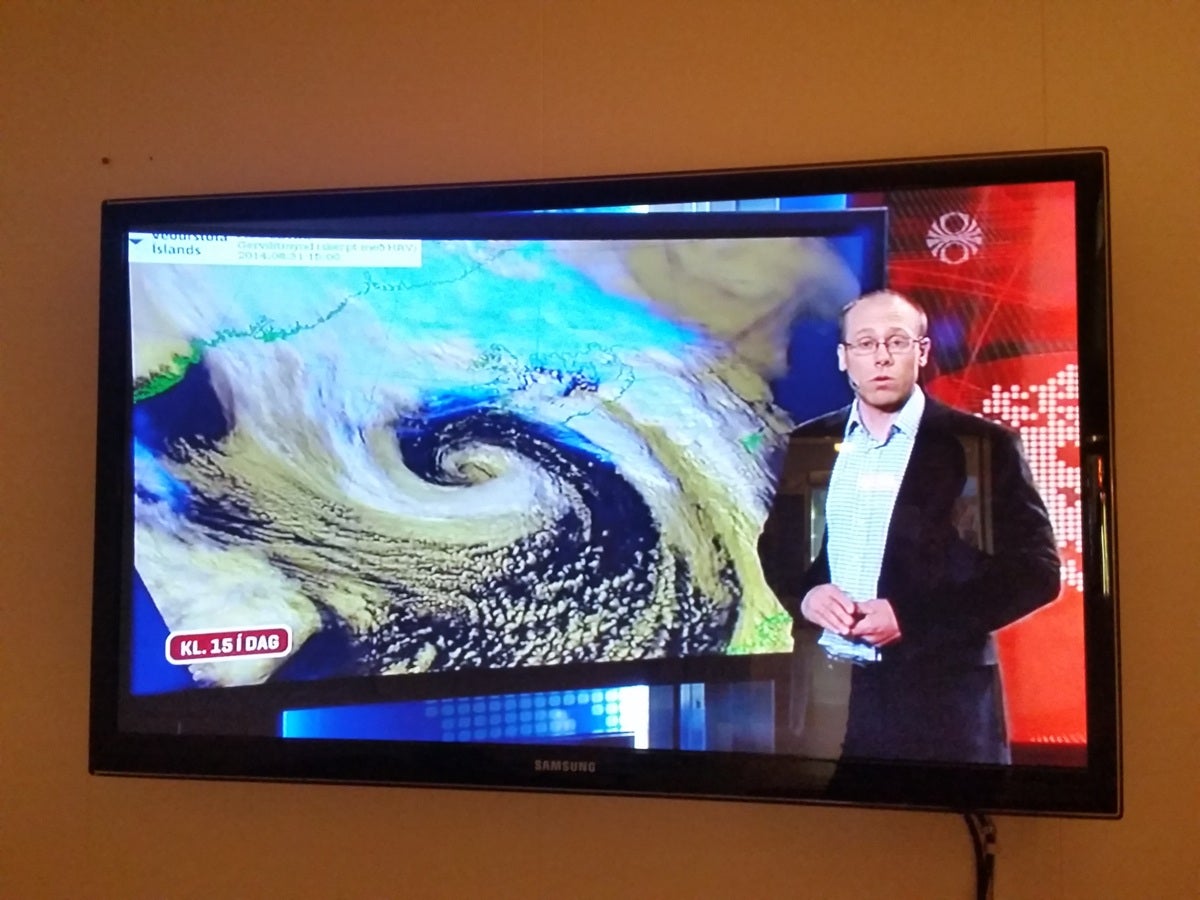 Well, the man had a point. We could probably have made it to Landmannalaugar before dark, but who knows what the storm would bring the next day. We had shelter, food, cold beer and a full bar. There are worse places to ride out a hurricane. Like out in the Highlands. Had we not pushed on the second day when Charlie was dragging, we would still have been out in the open and had to face whatever came the next day.

So we opened a tab with Inky and killed time as best we could. There was a large map of Iceland in the lounge where we examined the path we’d taken and plotted some loose next moves. The night was spent emptying Inky’s fridge and watching old Top of the Pops clips on BBC Radio 6. 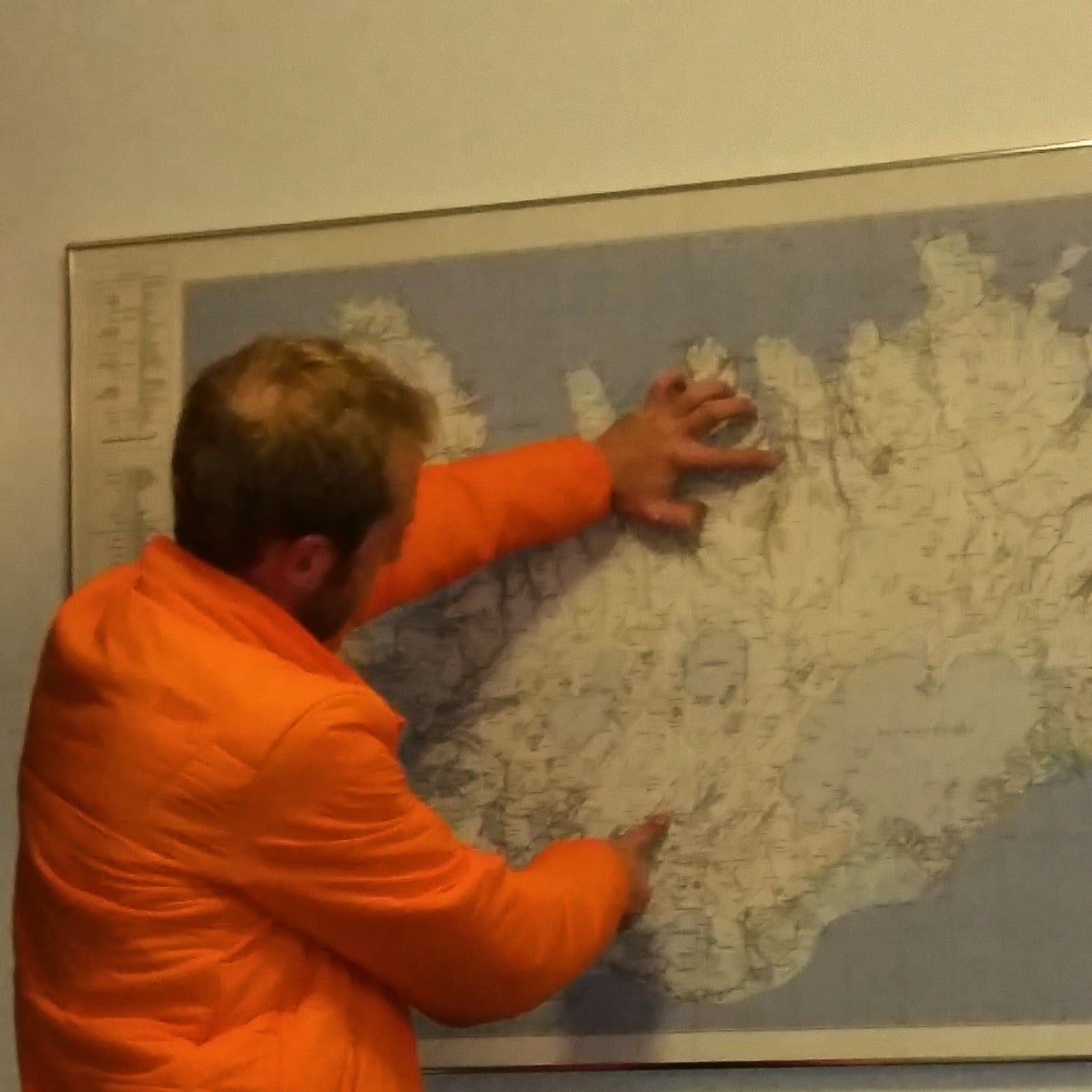 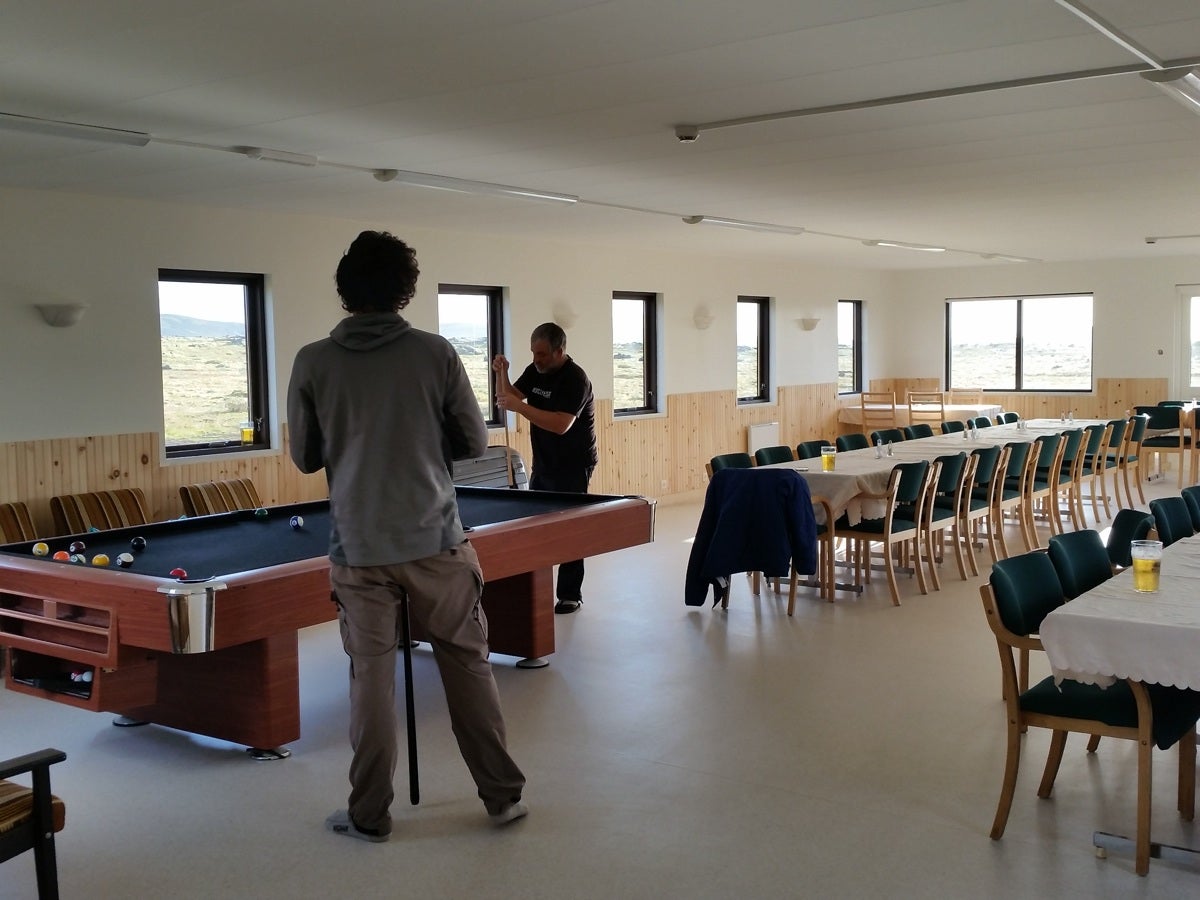 The next morning, the true force of the storm became apparent. Signs on the road were being blown down and the building was shaking almost constantly. After some time, we ventured outside. I was able to mount my bike but barely maintain control while being pushed along with the wind. It was all I could do to stand upright. 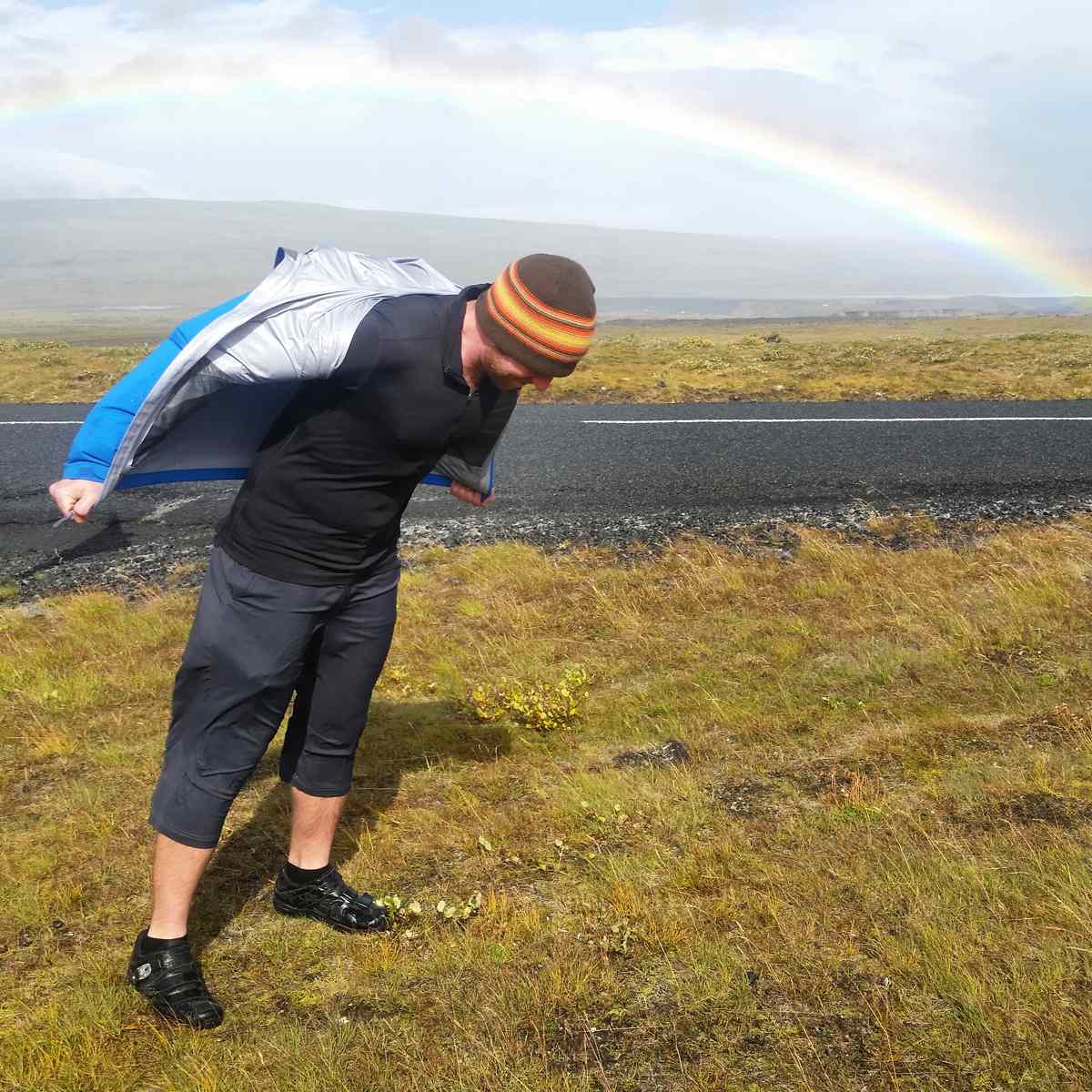 As the storm blew through, the plan of moving on that day was becoming much less likely. Gradually we began to consider the fact that we’d be there another night, pinned down for going on 36 hours. Granted, we were relatively comfy, but we were losing time. We were just about to reach the good stuff, and were worried that we’d have to rush through what we’d ridden 300 kilometers to see. 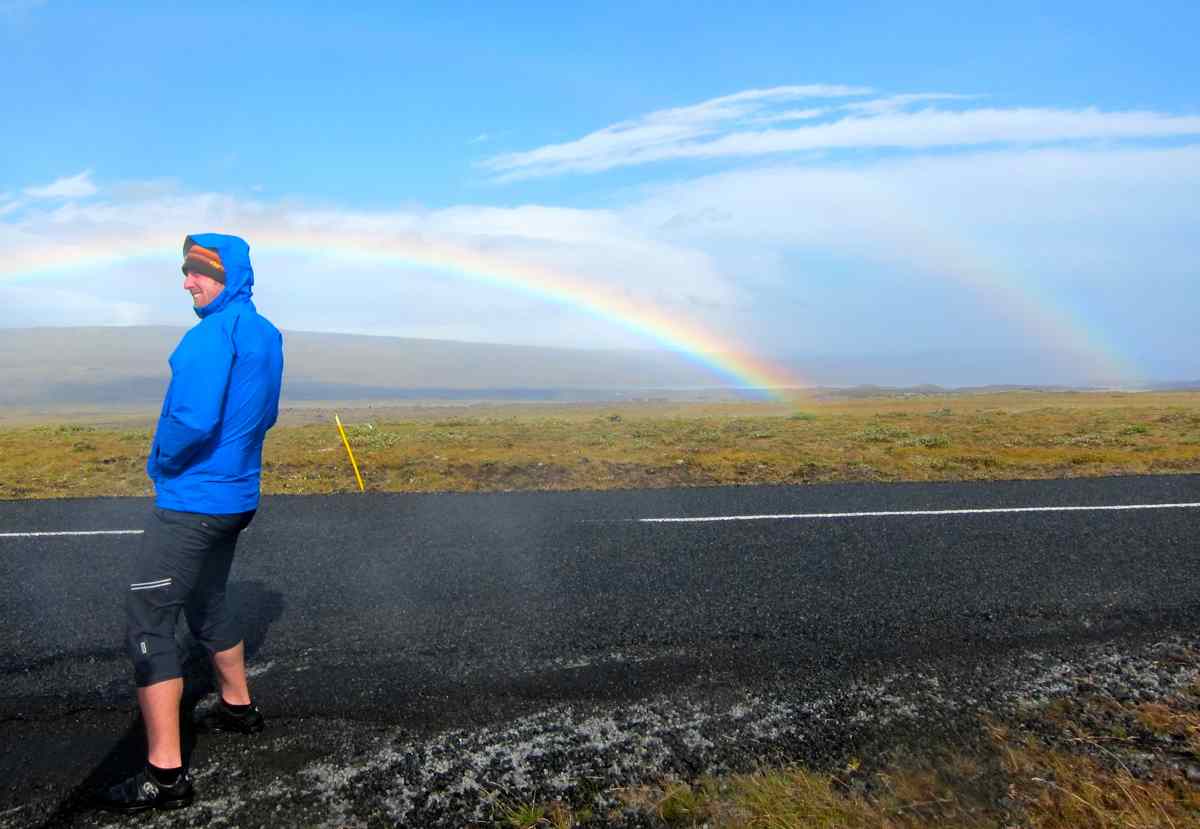 Back in Reykjavik, our fourth crew member had just arrived. Dirty’s gal Julie had flown in a week after us to do some hiking and join the party after we were to complete the bikepack. She had actually taken a bus to Landmannalaugar, but they weren’t letting anyone on the trails due to the storm. We debated what to do next. 36 hours behind schedule would mean that we’d have to blast through all the fun southern trails in order to finish our planned traverse in time. On the other hand, if we forgot about the full crossing idea and just tooled around the fun stuff, we’d have more time to explore.

In the end, we opted to have Julie rent an SUV and come extract us from the roadside hostel. We rendezvoused and finally made our way to Landmannalaugar. It was very much the right choice. 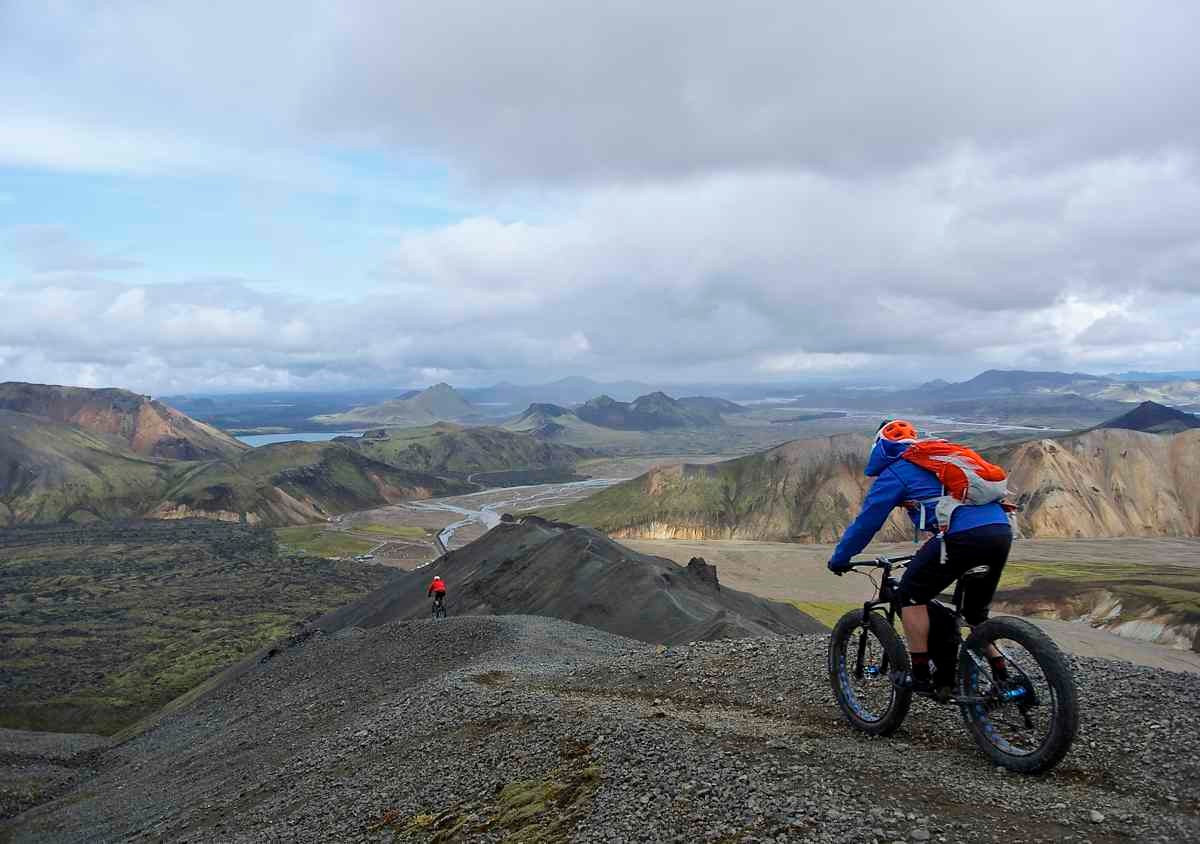 I had no words for what we saw upon reaching the Highlands. But this place trumped it ten fold. Fossilized lava flows. Volcanic hot spring pools. Glacial rivers. Mountain slopes pocked with geothermal vents. After days of bleak vastness it was truly awe inspiring. And trails everywhere. They crawled up the ridges, along the river, and snaked their way through the lava bed. 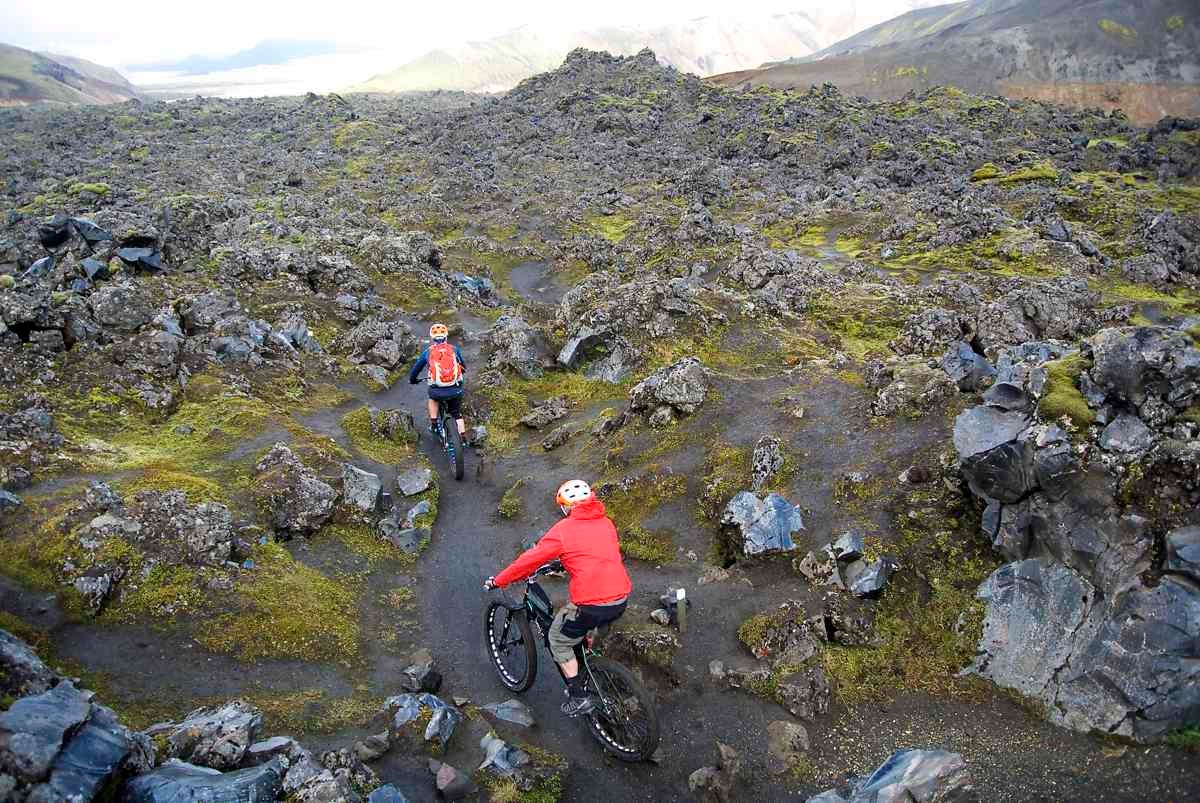 The views from the ridge were stunning, but I found the trail inside the lava field intriguing. Picking its way through craggy chunks of rock so large and sharp you could barely keep momentum. 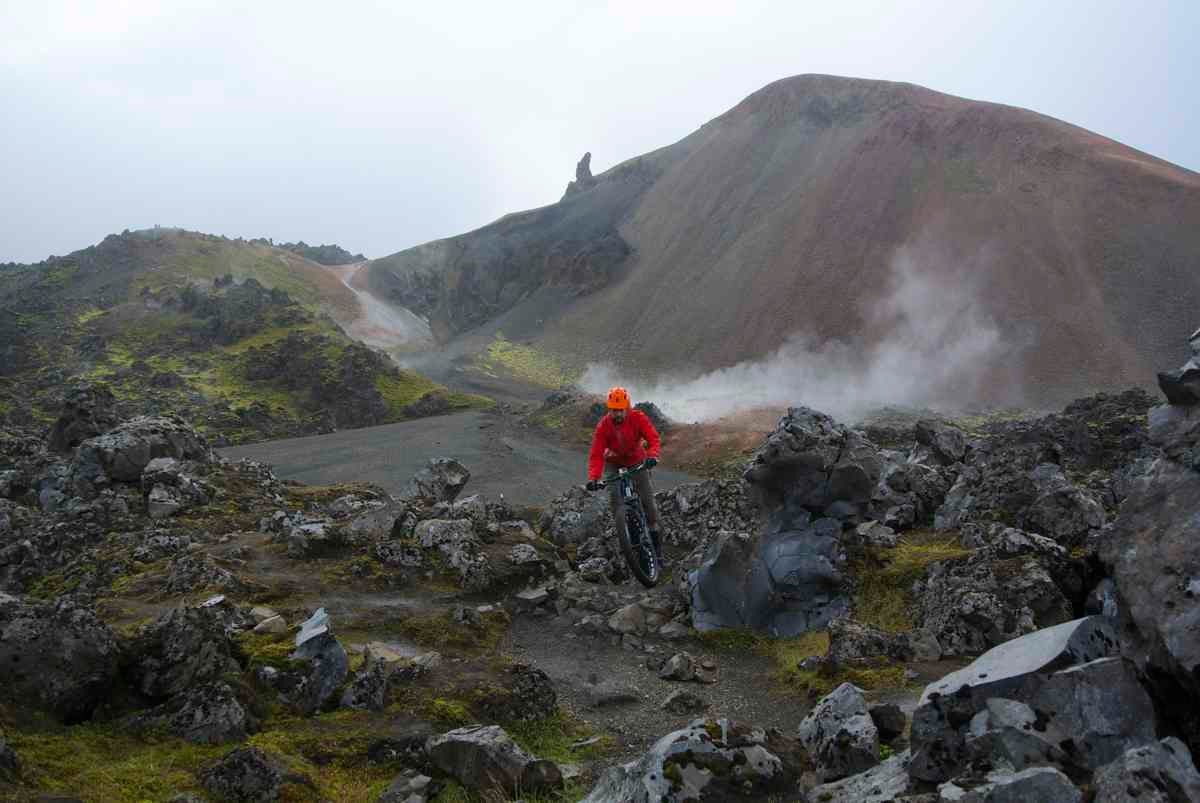 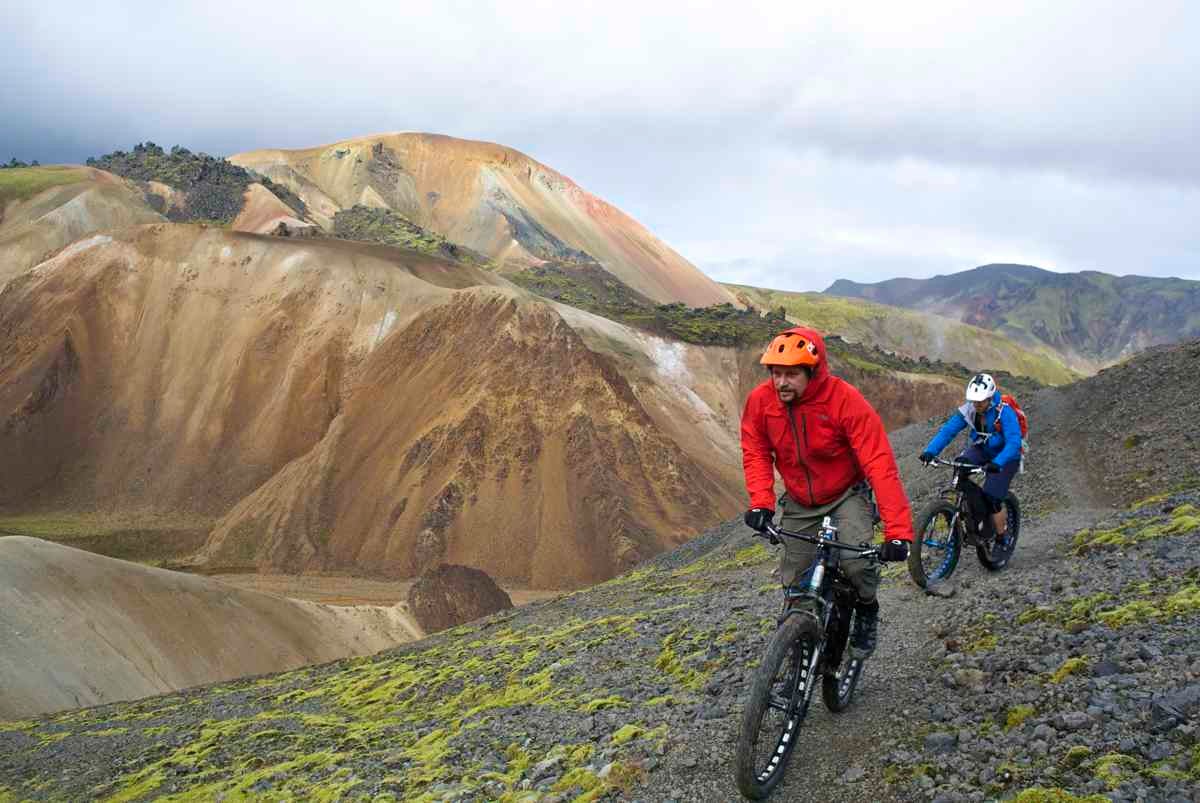 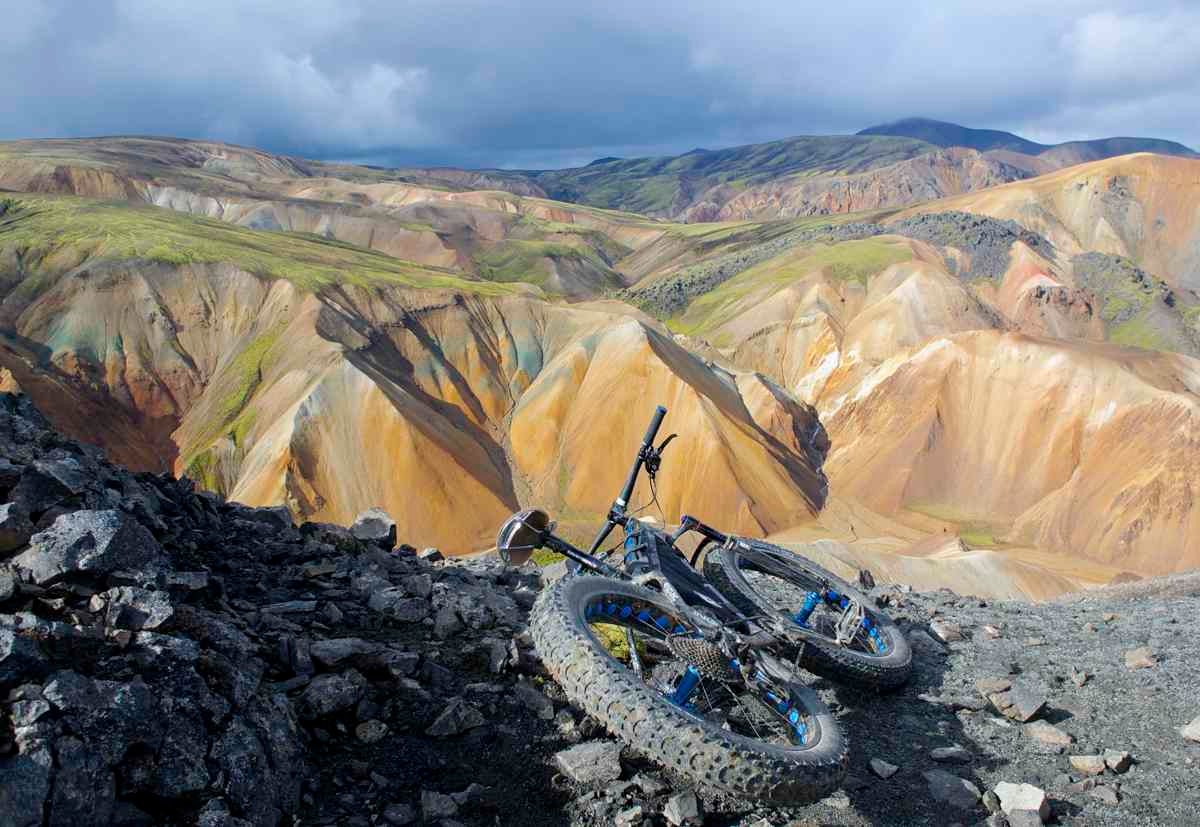 And we were ever so thankful that we didn’t have to blast through in one day. We took full advantage of the trails and post-ride soaks in the hot spring. 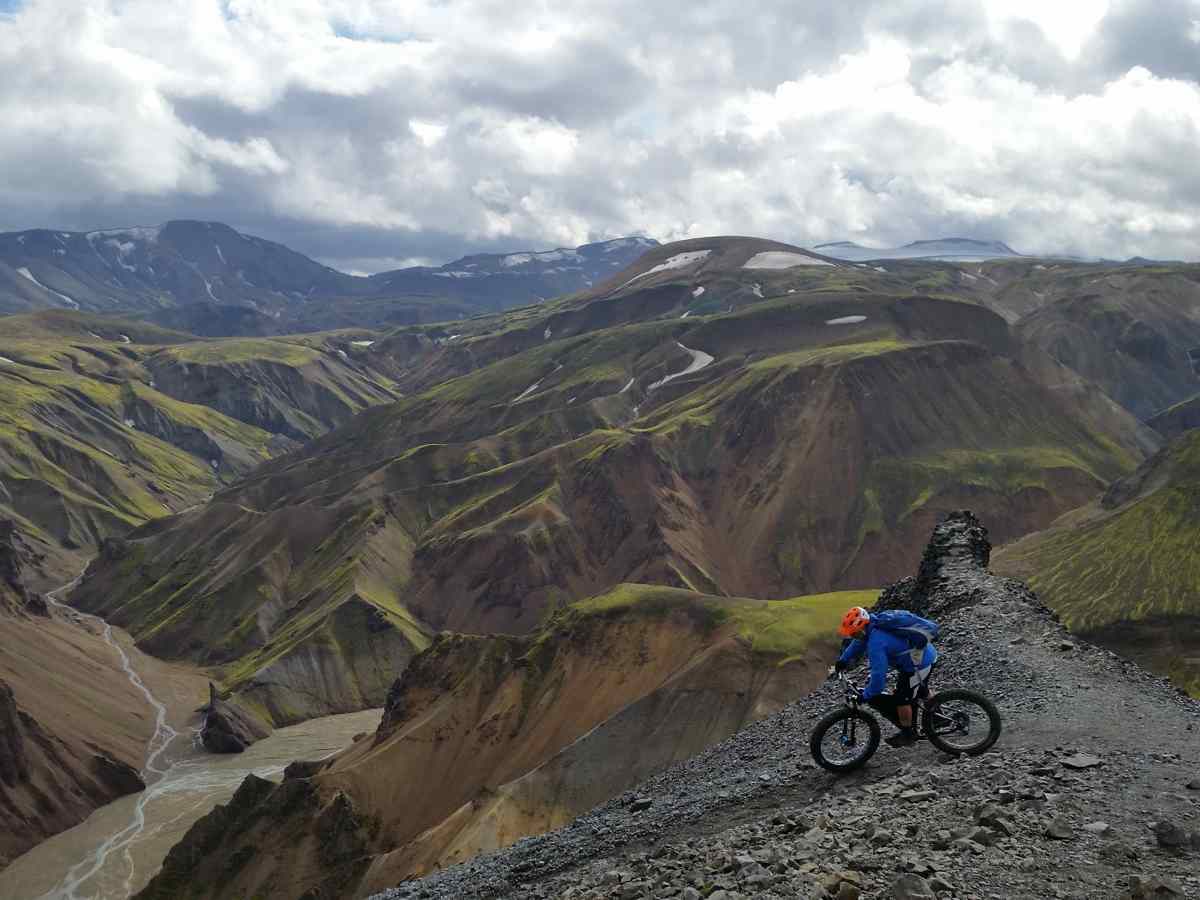 The second day, Dirty spotted a professional-looking photographer on the side of the trail. Just so happened to be Wade Simmons on location for a magazine shoot. The bike gods were truly smiling now.

It was hard to leave that glorious valley, but we had other spots to see and places to ride. We drove down to the southern coast to the tiny town of Skogar, known for their extraordinary waterfall, and were lucky enough to camp at the base of it. The damn thing is so tall it creates its own wind as the water falls. 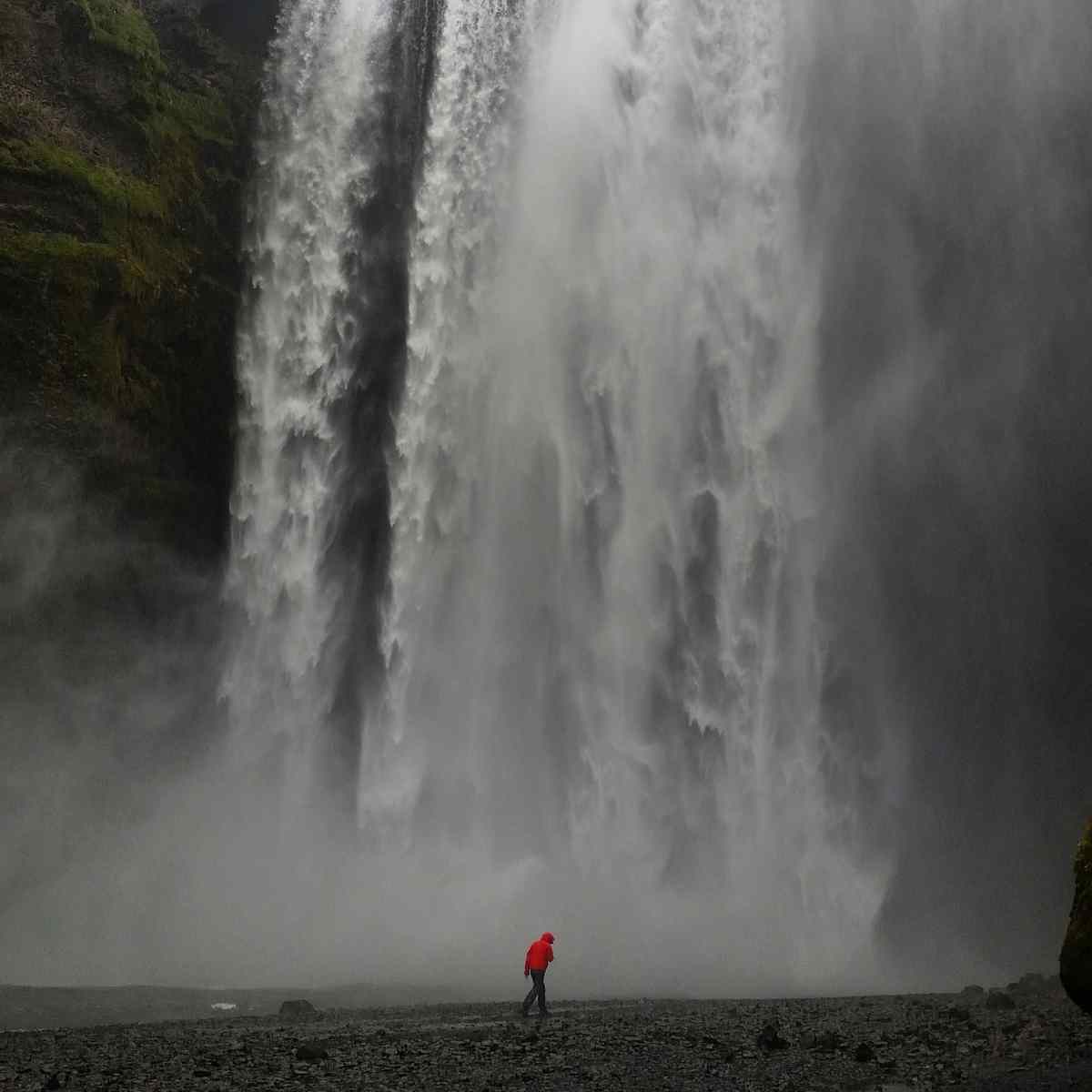 Before we left the States, I had grand plans of chasing a puffin in my penguin suit while there. And Julie offered to carry it for me so I didn’t have to pack it on the bike. Unfortunately we didn’t find any puffins in the wild, but I felt obligated to don it at least once since she lugged across an ocean for me. 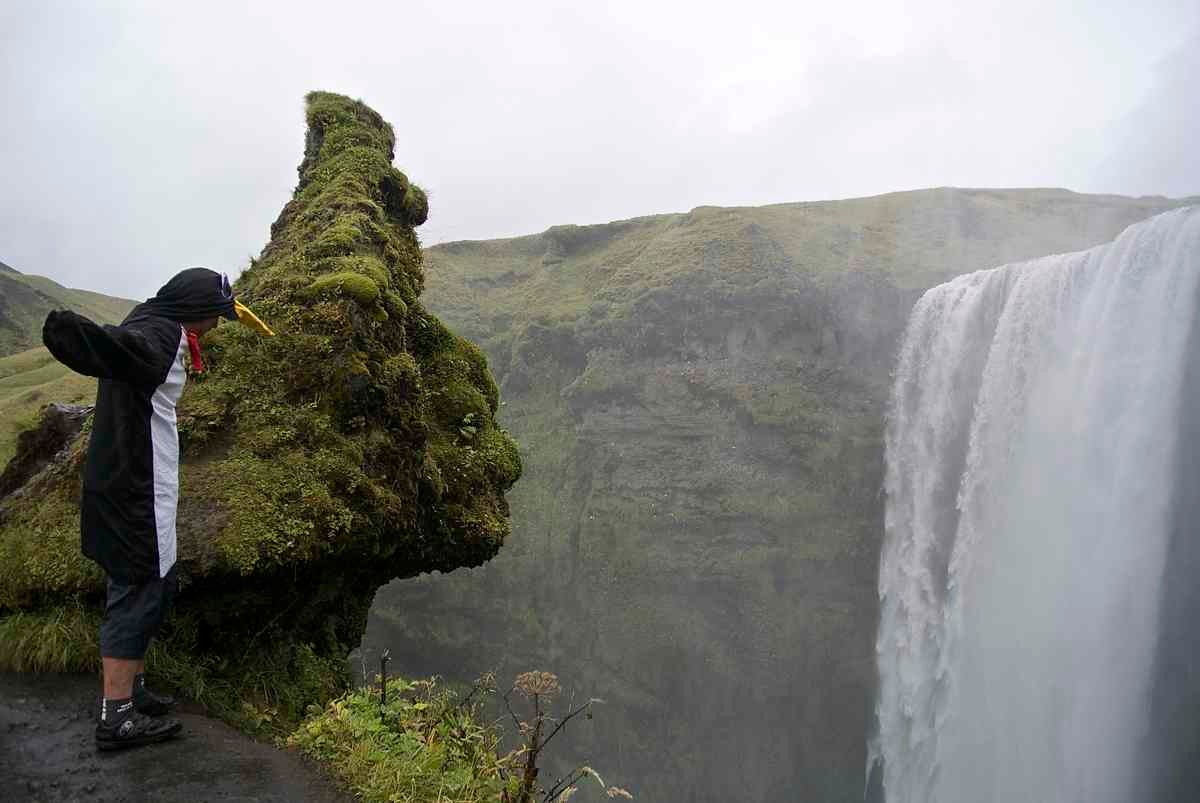 There were sheep to pester though. 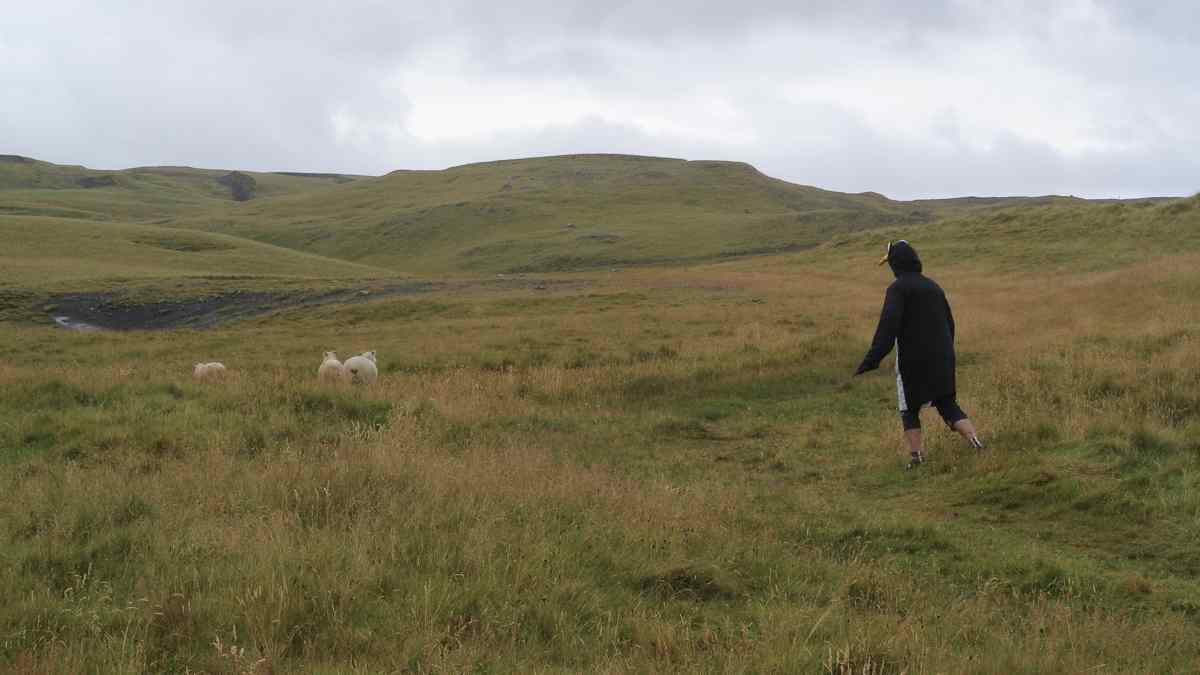 We followed that with a night in the village of Vik and enjoyed some time on their black sand beach. 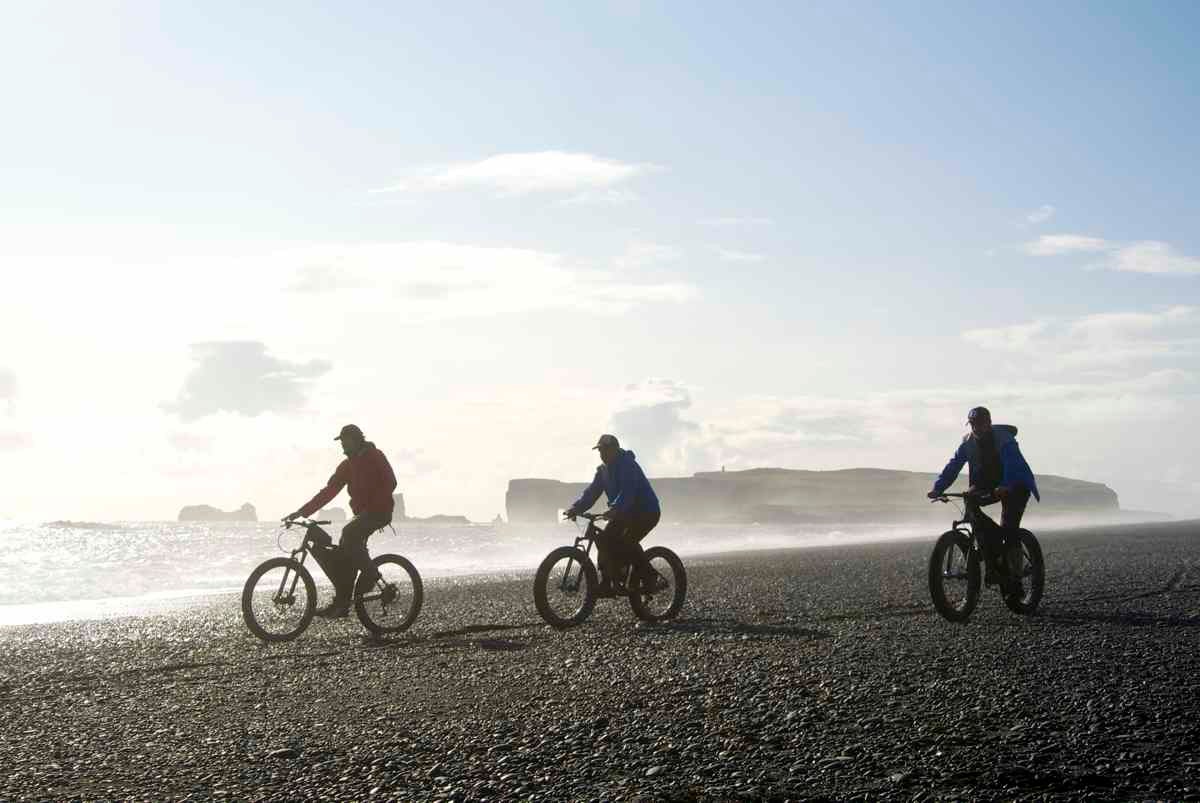 Although we didn’t have the opportunity to fully complete our coast-to-coast journey as planned, we got to hit every stop on the way. And I don’t think we would have truly appreciated the latter parts if we had to rush through, trying to reach the coast. Sitting on that black beach was a very calming end to that portion of the trip. We had prepared for the worst and been dealt a crazy hand. And it wasn’t over yet. 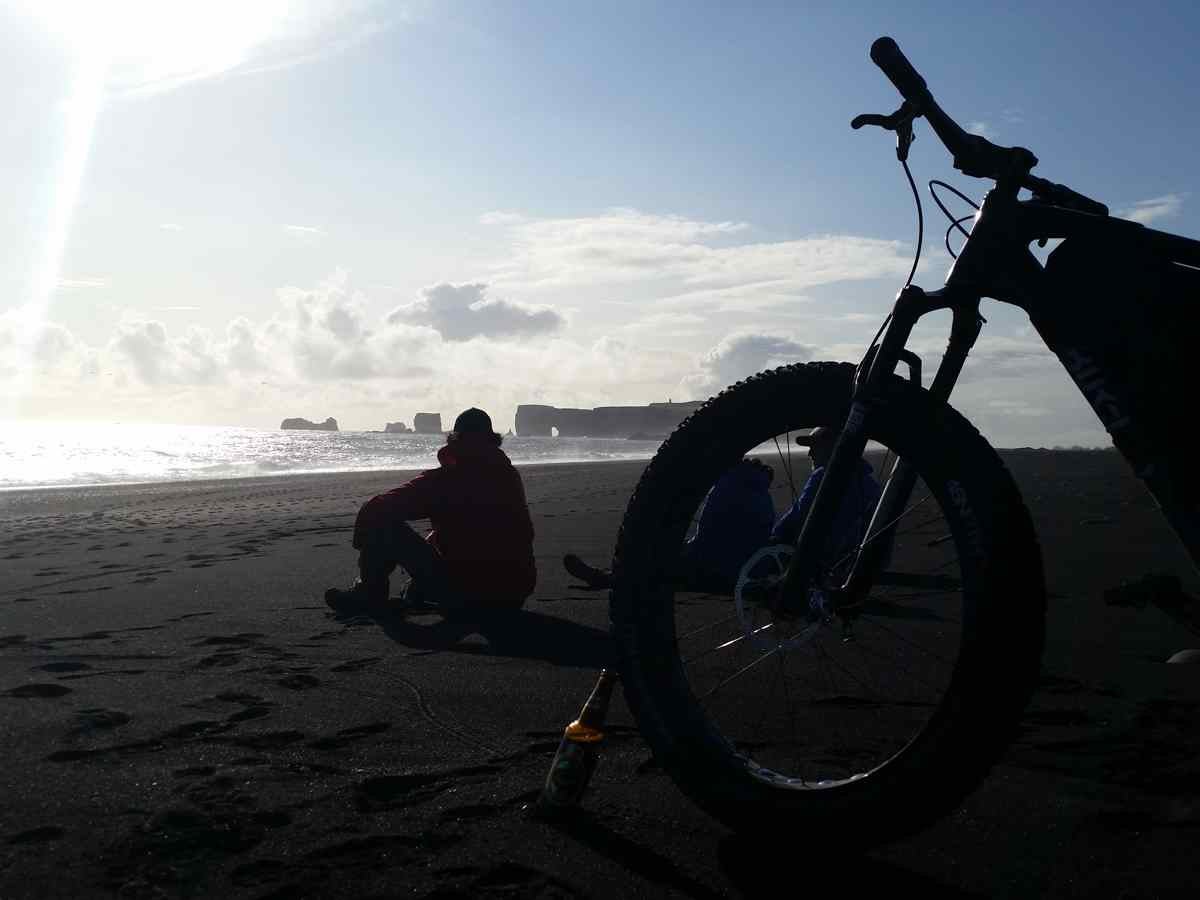 We still had time to explore Reykjavik. And there were some locals who wanted to take us riding. And drinking.

This post originally appeared on DrunkCyclist.com, which is quite possibly maybe NSFW for sure.