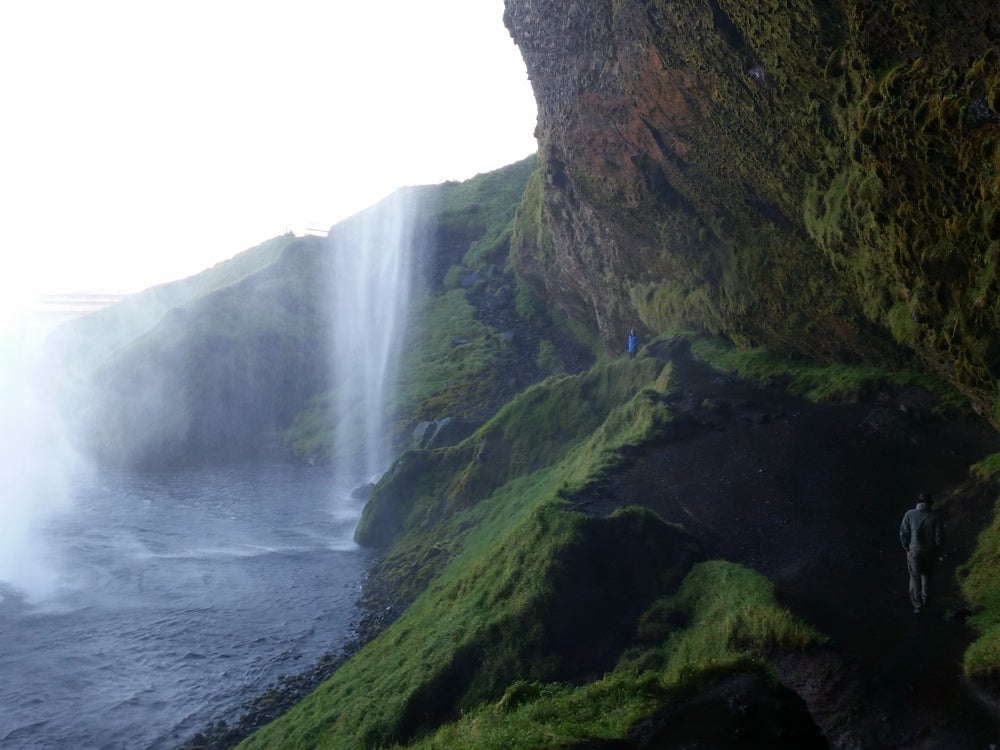 We had completed the main goal of the trip, so packing up the truck to head back to Reykjavik felt a bit like heading home. And I wasn’t ready. Nobody wants a fun trip to end. Fortunately for us, though, we still had plenty on the agenda. There were waterfalls to see and more trails waiting for us. And when the sun is up for 20 hours a day, you can get a lot done. 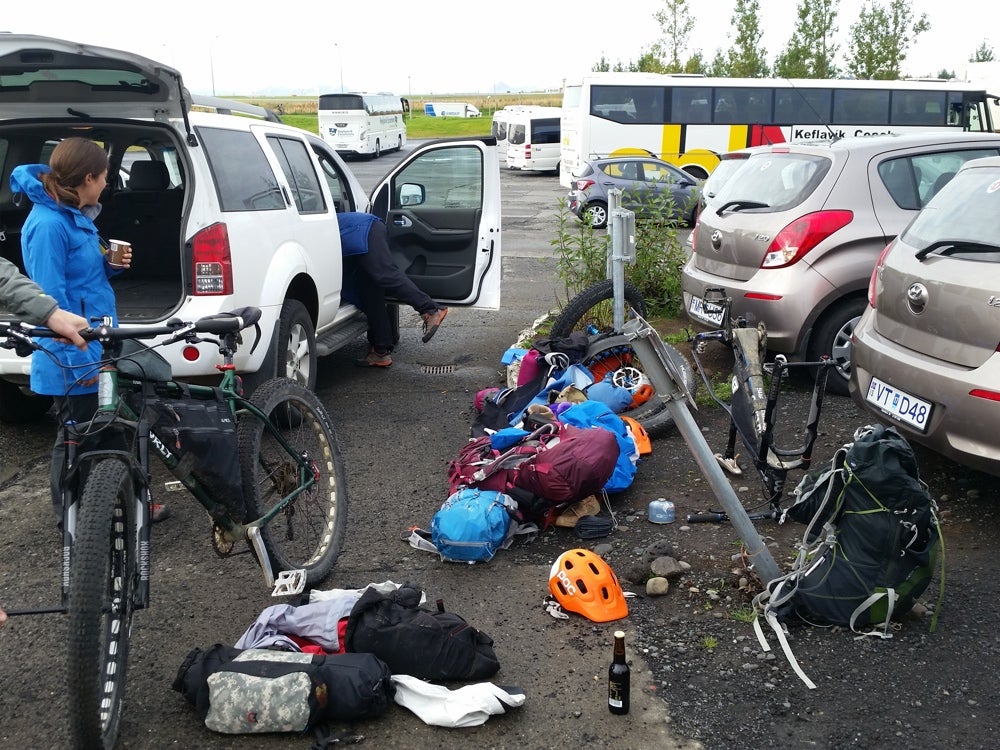 We somehow managed to lose the paperwork and a license plate.

This was the first opportunity we had to be true tourists. We wandered the city a bit before heading out to ride with some locals. There’s a bar devoted entirely to The Big Lebowski. It’s an odd look at a sort of Americana through a foreign lens. A bowling lane mounted to the wall. Pictures of Los Angeles. $15 White Russians. Even a spinning wheel with various drinks on it. 1,500 Krona ($20) gets you a spin. You can win anything from 10 beers to a high-five. 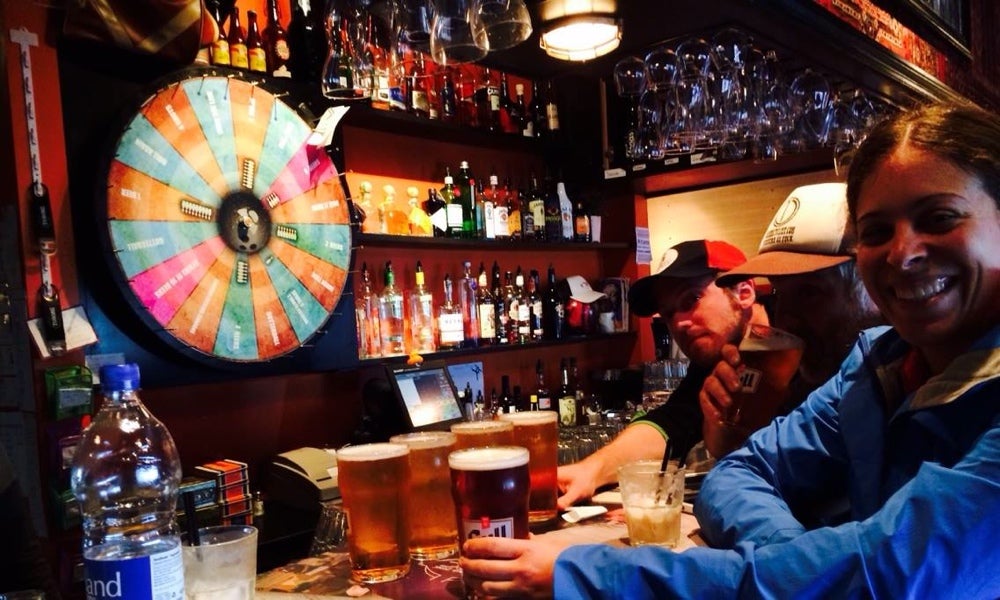 The 10 beers was a challenge as it was only about 3 p.m., and we still had to ride. Not our first rodeo, though. Back at the hostel bar we met with a few local riders. You’ll often see us post on the Facepage asking about followers in cities other than our own. A man named Bjarki raised his hand this time. We only had a day in Reykjavik left but he offered to show us the goods. Arriving with his friend Georg, a trailer, and even a shuttle driver (thanks Aron!), he promised “the best last day Reykjavik has to offer.” It appeared that our winning streak had continued. 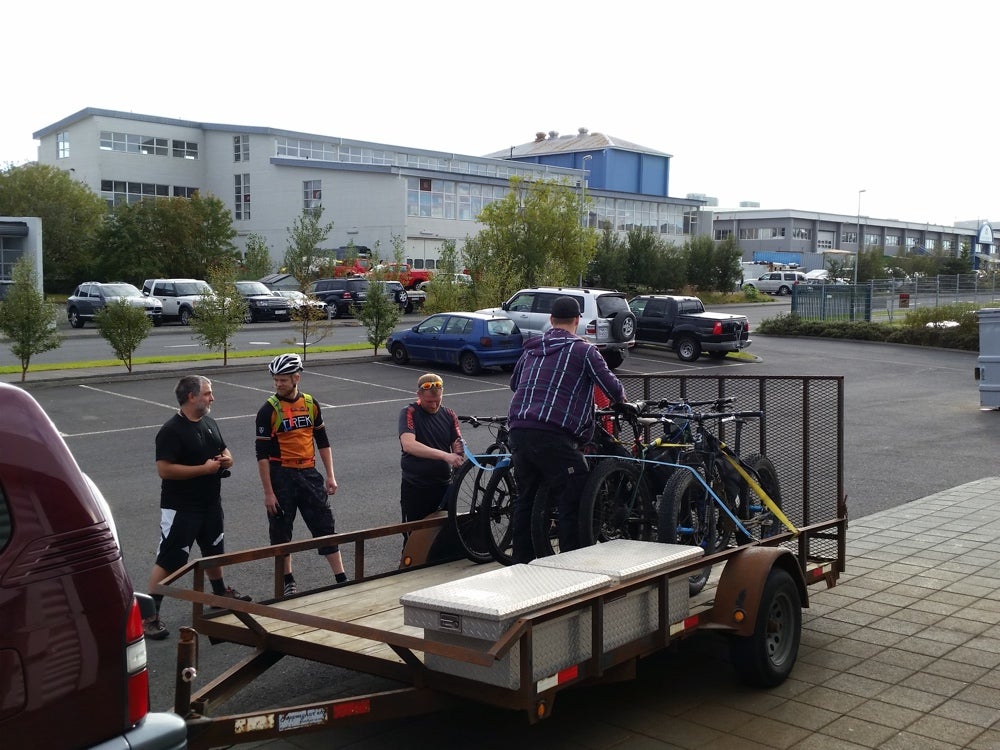 They drove us north of the city into the hills so we could descend on trails back into town and then ride back to the hostel. We’d almost reached the trailhead when a man with a flag in a safety vest stopped us. Turns out there was a film crew working on a movie set ahead. None shall pass. All was not lost though. Fortunately Bjarki was able to reach an agreement in authentic Icelandic gibberish. They let us through after the smoke truck passed. 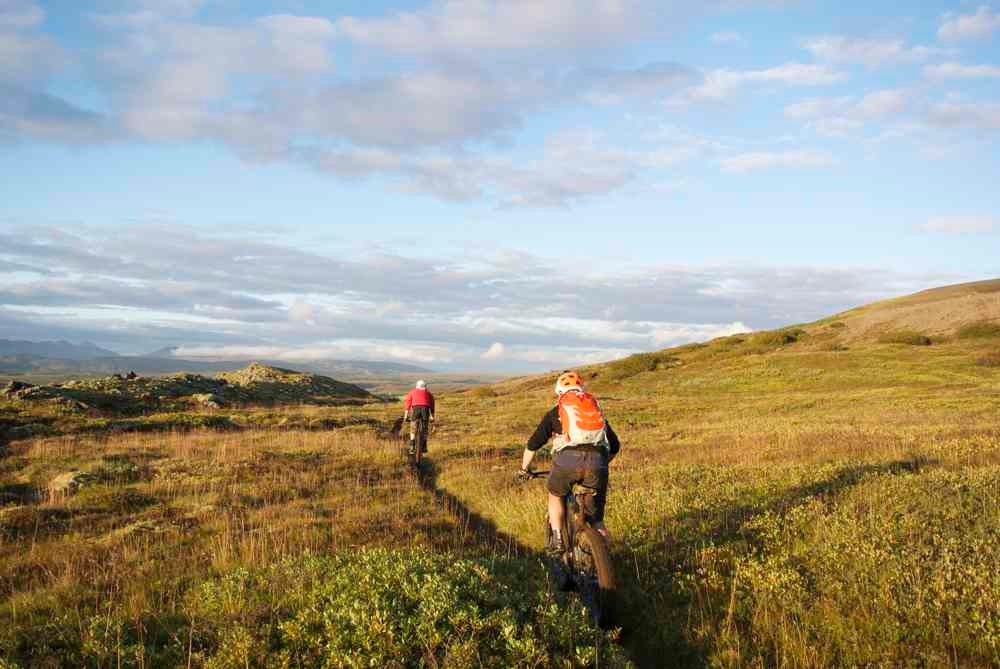 It always feels like an honor to be toured around by a local rider. These are their trails. It’s what they know. What they build and defend as their stomping grounds. Because that’s how I treat it when playing tour guide. Like a kid pinning a crayon drawing to the fridge, Hey look what I have! And I believe it also speaks to the nature of our cycling community. Our desire to share special places and the experience of riding. These guys took a full day out of their lives to help some foreigners from clear across the globe get one last shred in. And it really couldn’t have been any better. 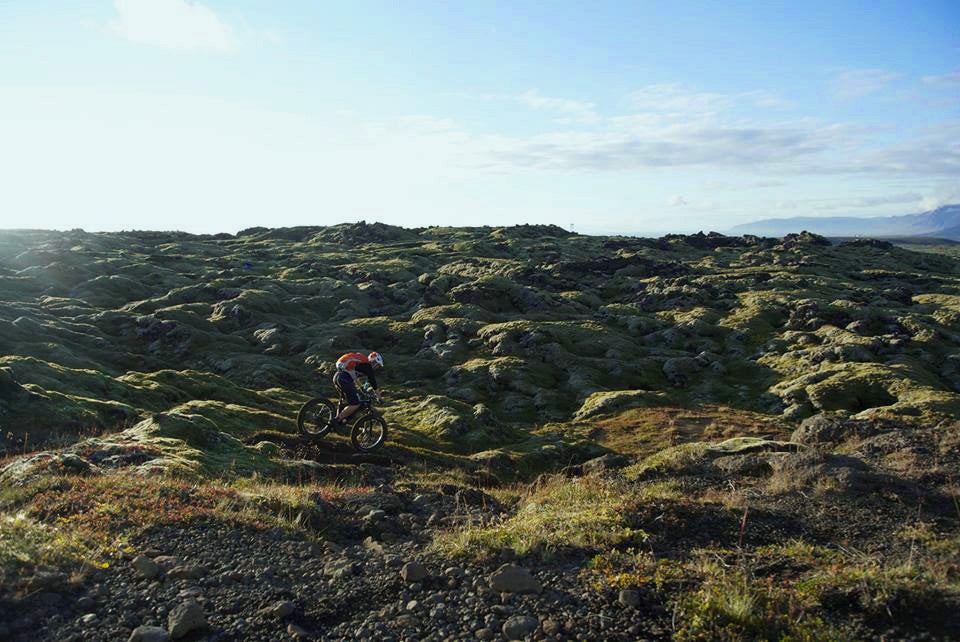 The weather was ace, the trails flowy and fun. And the stunning views continued just as they had all trip. They spoke of other trail areas just a bit out of reach due to our schedule. This was their after-work ride. Just enough to scratch the itch on a weekday. Which was more than enough for us on this day. 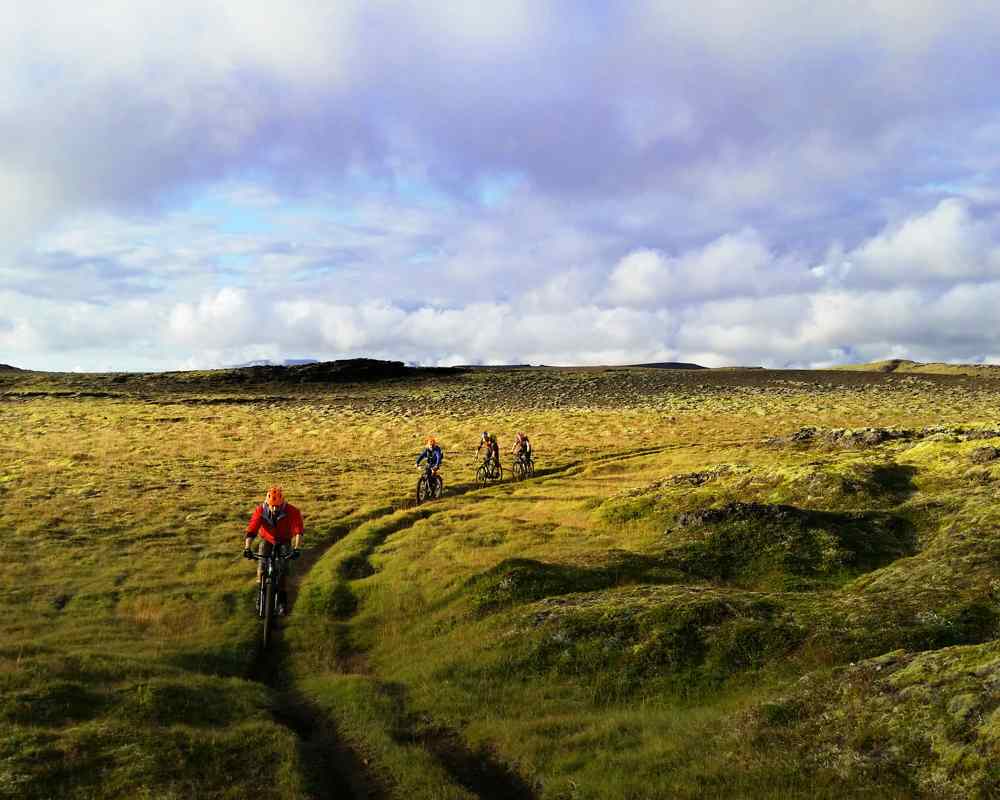 Coming into the last bit of trail Bjarki surprised us with a section of rickety wooden planks over some marshy bogs. One last treat to cap the day. We’d been told that we were stopping for beers on the way back to town, but right on cue, Georg pulled four tallboys from his pack. “You’re the Drunkcyclists, yes?” I think I gave him a hug. 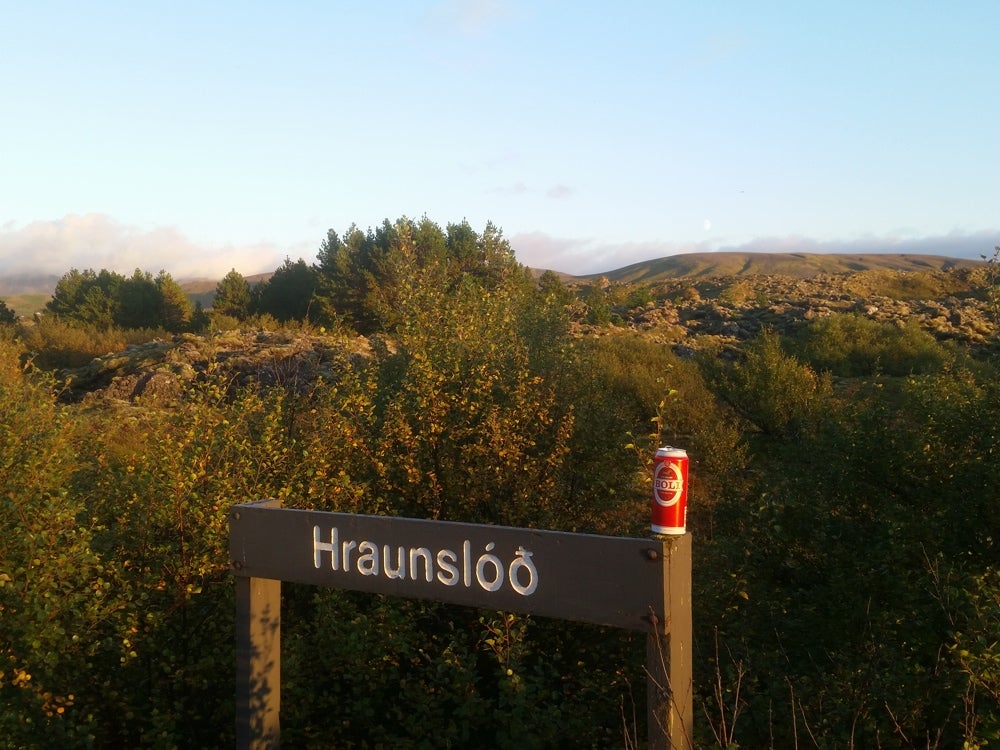 Surprise post ride beers. They knew us so well.

Rolling back to town on paths and streets I found myself getting a taste of what it may be to live there. Picturing it as if this was my actual ride home. In way it completed the trip at just the right time. We’d seen towns, crossed the Highlands, touched volcanoes and a hurricane, rode through geologic history, played on the beach, and now we were getting a flavor of the local lifestyle.

Again back at the hostel bar we shared dinner and some beers. Bjarki peeled off to head home for the night. Georg and Aron weren’t done with us, though. We all cleaned up and rendezvoused once more for some time on the town. Walking between various pubs, drinking strange liquors, we all swapped stories and explained cultures. At last call we learned one very valuable lesson: In Iceland you can take your drink with you when the bar closes. Everyone just piles their glasses at the front door when finished. So classy.

The next day we did some more touristy stuff before truly packing up. It was an urban ride back to Hafnarfjordur where our luggage and bike cases were waiting. However we still had one last night before we actually boarded planes. Bjarki, Georg, and Aron had informed some friends in the area that we would need company. We were to post our location on social media and they would come find us.

We also came to learn that by pure coincidence, another internet cycling personality was leaving Iceland on the same day. She had just finished a second stint of touring the island with her friend Simon. Mirjam, a.k.a. The Cycling Dutch Girl, met us at our hotel to join in the final night’s celebration. She had some amazing stories of pedaling beautifully lonely places much like our own. Only this was her life. We were going home, she was just continuing the journey on to Canada. We were jealous, to say the least. 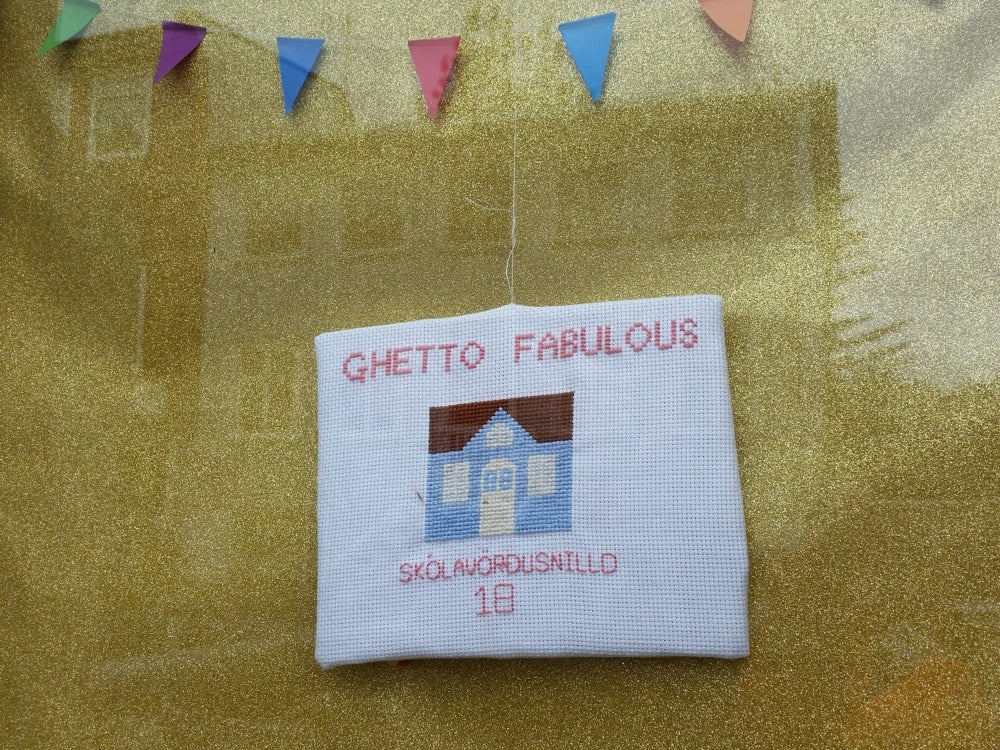 We all went to dinner and then on to a highly recommended English pub. In Iceland. For ladies night. Where the special was 2-for-1 mojitos. When in Rome, I guess. We posted our location to the Facepage as we were told to do and then carried on the celebration. Within an hour or so, things were getting foggy, a group of very large Icelanders walked in and approach our table. “You are the Drunkcyclists? Yes?” “Why yes we are!” These were the friends that were told to find us. Turns out they’re part of the Icelandic search and rescue team, just getting off shift. One of them was still in his gear, radio chirping. We told them about our journey through the Highlands and asked, “Are you the guys who would have come to get us if shit got too real?” His response, “Yes, that’s us. We’re much happier meeting you at this bar though.” As are we, fine sir, as are we. Needless to say there was some carrying on. I questioned the legitimacy of some of their liquors. This was a poor choice, as they only kept arriving at the table. This bar also had a spinning drink wheel. And we spun it. And it spun us. Morning came with vengeance. Charlie almost missed his flight. Alas, the last night was a success.

Dirty and I proceeded to fight through the hangover and pack up our bikes like we had so many times in the past. Never before had I been so exhausted and satisfied by a bike trip. Iceland may be a small island by some comparisons, but we’d given 100 percent for two weeks and barely scratched the surface. We never made it to the Westfjords, but it’s a region that deserves much attention on our next expedition.

The Elves of Icelandic folklore may be nothing more than fun stories, but I will say this, there is something undeniably special about the place. Something you can’t quite put your finger on. The landscape, the beauty, the people, their music. It’s very mysterious. Maybe it’s the constant geologic activity that gives the land its energy and character. Whatever it is, it will stay with us for a long time to come.

Thanks Iceland. Truly. We’ll be back.