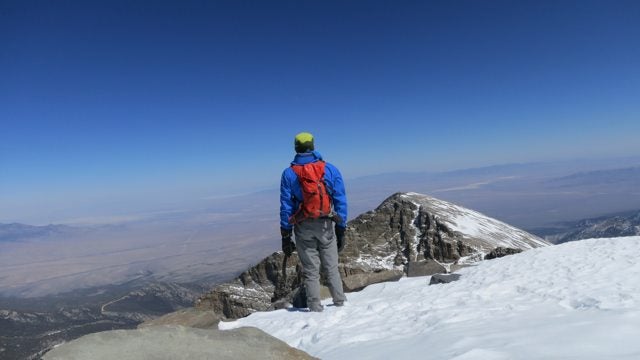 Utah is not exactly a destination for alpine climbing. Close to Salt Lake City, the Wasatch Mountains do provide deep snow, good rock climbing, decent ice, and increasingly better beer. But for mountains with long, steep rocky faces that are speckled with ice and snow, you will have to drive elsewhere. Sure, there’s Jackson with the all-notorious Grand, but you’ve “already climbed that and it was way busy.” So, next time you get the alpine itch, try someplace new!

Just a four hour drive from Salt Lake City, the Great Basin National Park has the designation of being monumental, up there with the likes of Yosemite, Yellowstone or Sequoia. Hell, not even those parks got recognized as “Great.” Established in 1986, Great Basin, as it turns out, feels more like a place that has been long forgotten. In fact, in my five trips to the park, I have still yet to see a ranger. That said, I have seen human footprints in the snow and on one trip to Great Basin, there were two other cars in the parking lot.

As I ski toward the north face of Wheeler Peak, I stare in amazement at the snarled and resilient ancient bristlecone trees. I listen closely, hoping that one might whisper a secret from the past 4,000 years of their existence. Rooted to their spot, sunshine glazed and twisted golden branches, they inspire endurance and hubris to this human. There is beauty in age, stand proud. Rock fall breaks my fixation and I turn my focus to the jumbled rocky cirque ahead.

Choss should not be neglected, it makes you a better climber, and makes you appreciate perfect stone. Wheeler Peak will prepare you for the high grade while you pick through the worst. The rock is not good, but it is climbable, and from the snowy 13,064-foot summit of Wheeler Peak, the Nevadan desert—a distant 8,000 feet down—appears like an ocean of sand. Here’s how to get there:

Approach Options
A: March, April, and early May are best. Call the ranger station in Baker, NV (775) 234-7331 and ask them if the road is open all the way to the Wheeler Peak campground. Typically in March and April it is not, but in low snow years it can happen. If it is open, drive all the way to the campground where you will hopefully find snow, and then ski on the Bristlecone Pine Grove trail toward Nevada’s only year-round glacier and the cirque below the north face. Maybe 3.5 miles.

Climbing
While there are several lines in the Wheeler cirque, the true gem is probably the Northeast Couloir (aka The Wheel Deal). Eight to ten pitches in length, the route is primarily a long mixed climb with numerous tricky and engaging M5-M6 steep sections. In some years, The Wheel Deal can be trickled with small amounts of ice. Some have compared the route to the Grand Teton’s Black Ice Couloir. You likely won’t place an ice screw as there is adequate rock protect on both sides of the route. Nuts and a single set of cams to #2 should suffice. From the top of the couloir, it’s a short walk to the summit of the peak and the descent is an obvious walk off further to the right and back down to your skis at the base of the cirque. See James Garrett’s Utah’s West Desert guidebook for more information.  Go get it!