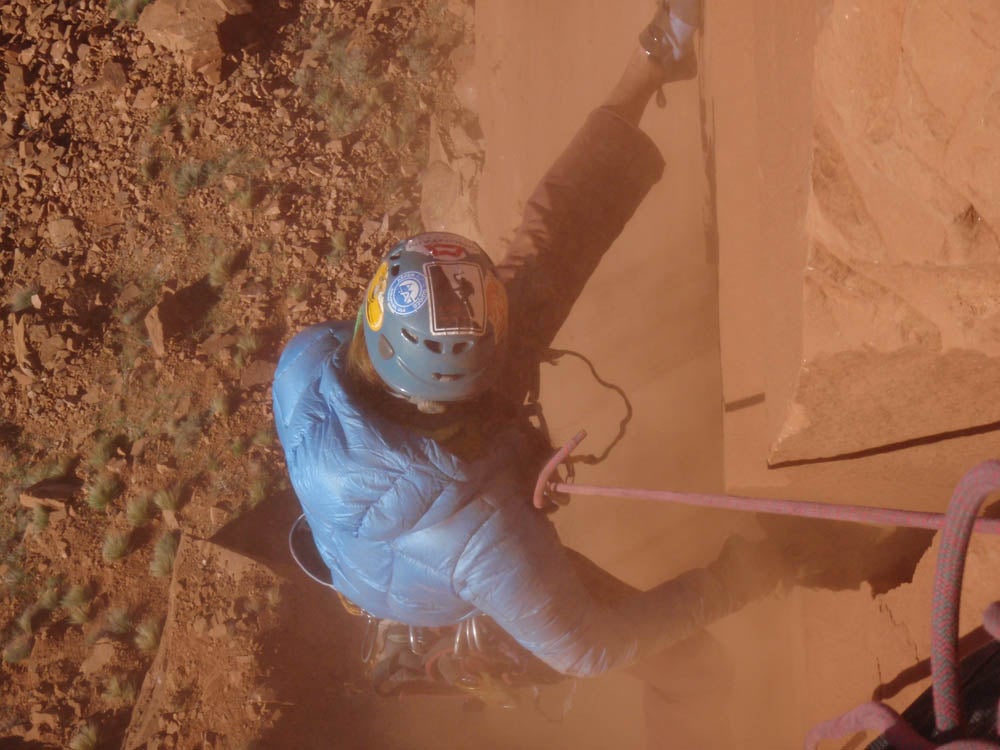 A few years ago, a concerned climber e-mailed me because he was unsure whether or not I’d put up a Black Canyon climb in "ground-up" style for the first ascent. I found this quite peculiar, but thanked him for his concern. It wasn't the first bit of criticism I'd ever received. And it wouldn’t be the last.

A few days later, he emailed me again, fearing I may not have placed bolts from a hook. "Who is this guy?" I wondered, but I didn't really care.

Before I could continue the correspondence, my lovely wife grabbed my laptop and wrote him back, "Go %$#@ yourself and mind your own business!" The correspondence with the critic more or less ended after that. But it got me thinking, why does it matter so much to people exactly how a first ascent is put up? 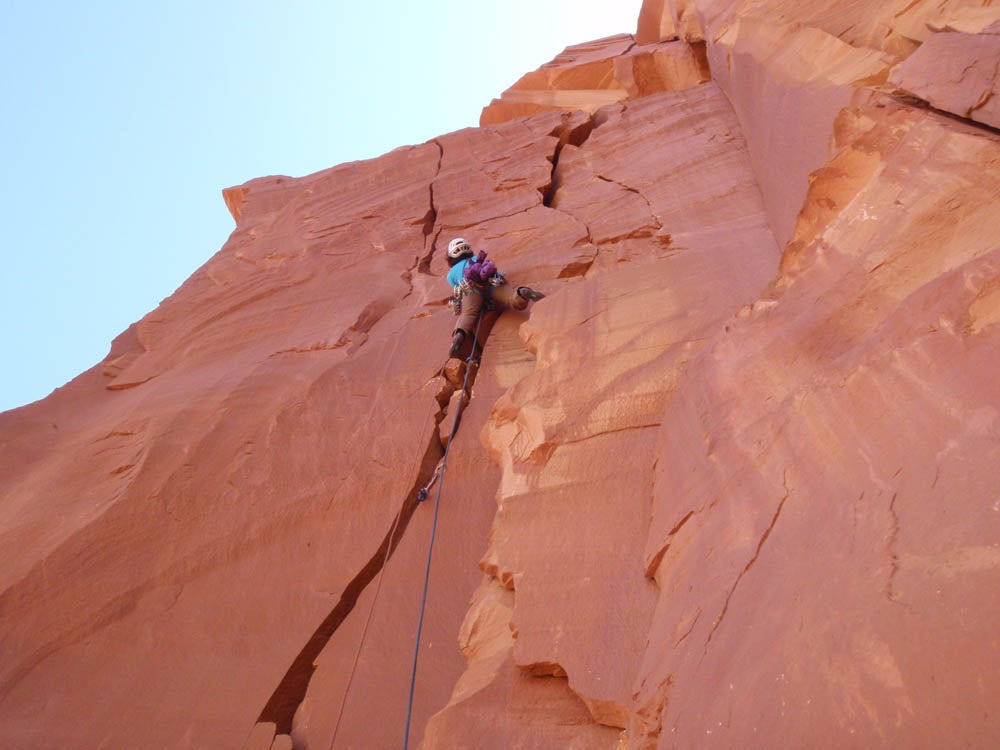 First ascents are thought of as glorious—you've found a new way across some stone and gone somewhere nobody else has, even if it's just 30 feet away from some other route. We call this land grab a first ascent. There are many directions from which you can access these vertical planes, but those folks in Internet-landia seem to think there is only one ethical way to establish a first ascent: from the ground-up. I'm not entirely sure what's so ethical about such an egotistical endeavor, but this game began long before I arrived on the scene.

Ground-up is a simple concept: You start at the bottom of the potential route, and when you’ve battled gravity to the top, you've achieved your place in climbing heaven. A guidebook's first-ascent listings are climbing heaven’s guest list, in case you didn't know. Some climbers are a little insecure about this theory, so they do many first ascents to make up for all of their other sins.

I think this concept was born when there were fewer climbers and fewer climbs. These days, it takes a clever eye and certainly a journey into the obscure to find your way into climbing heaven. Our gear is much safer these days, but where we must tread is not always so. 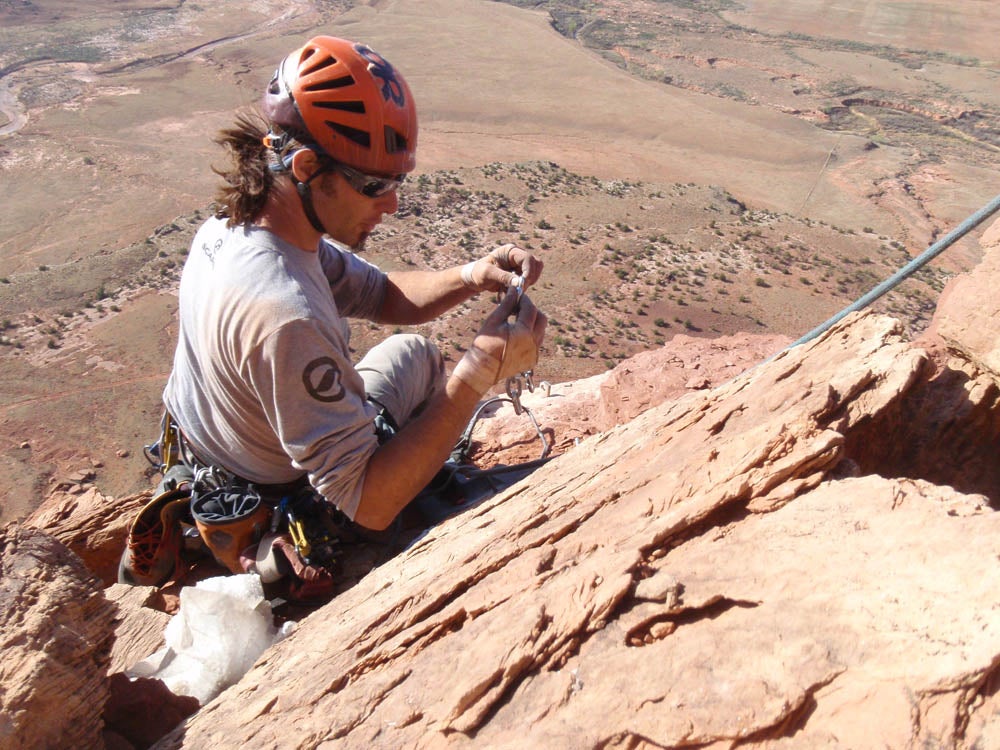 My personal philosophy on ground-up style became clear on a desert tower in Indian Creek, Utah, at one of those "how did someone miss this beautiful splitter" type of cracks. Thirty feet up the wall, I took a few moments to throw down loose rocks lodged in the crack. Sandstone is so cool when it’s trundled—it often just disappears into a puff of smoke. This extra effort while climbing is what you might consider a common courtesy to your partner. Mary, my partner who would be following me up this part of the route, was hiding around the corner, hopefully out of firing range.

While I was tossing rocks and dreaming about first ascent glory, I pulled the plug out of the bathtub drain, metaphorically speaking. Dirt started pouring out of the crack. And then more dirt started pouring out—so much dirt was pouring out that the sound was loud. A cloud formed around me, and I started to wonder what kind of geologic event I’d triggered. In all my years of climbing, I’ve never experienced anything like that. Disoriented by the sound and lack of vision, I scrambled around, trying to decide which side of the crack to hold onto for fear that it might also be the last ascent of the tower—an even rarer claim than a first ascent—and I hadn’t yet transcended to desert climber heaven, despite the sand that filled every exposed orifice.

My cleaning efforts may have backfired. Another thirty feet up the route, I found myself negotiating a horribly loose and fractured ramp, likely facing a ground fall if I lost purchase. Up, down, throw some blocks off the wall, up, down, still loose. I might be here a while, I thought. 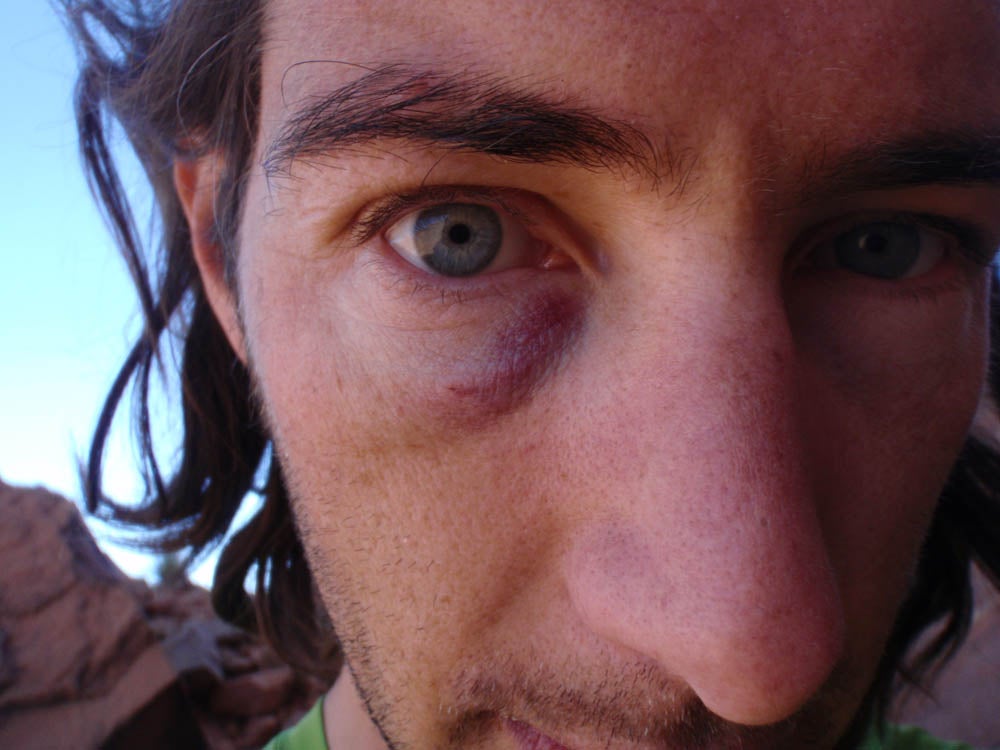 My mind drifted back to that concerned climber who’d written me. This terror I'm experiencing, "This is what you wanted, right?"

I wondered why my experiences were of importance to him. It was only Mary and me on that ride, as far as I could tell. Why should I put us in such grave danger?

I know I’d put myself there, but the best answer of "why?" I could come up with was that it just seemed like too much trouble to climb the tower by an existing route to clean and equip it by a safer manner. Regardless, there I was, going ground-up on a first ascent. That jerk who e-mailed me would be so proud, I thought. So would all of those other concerned climbers out there on the Internet. 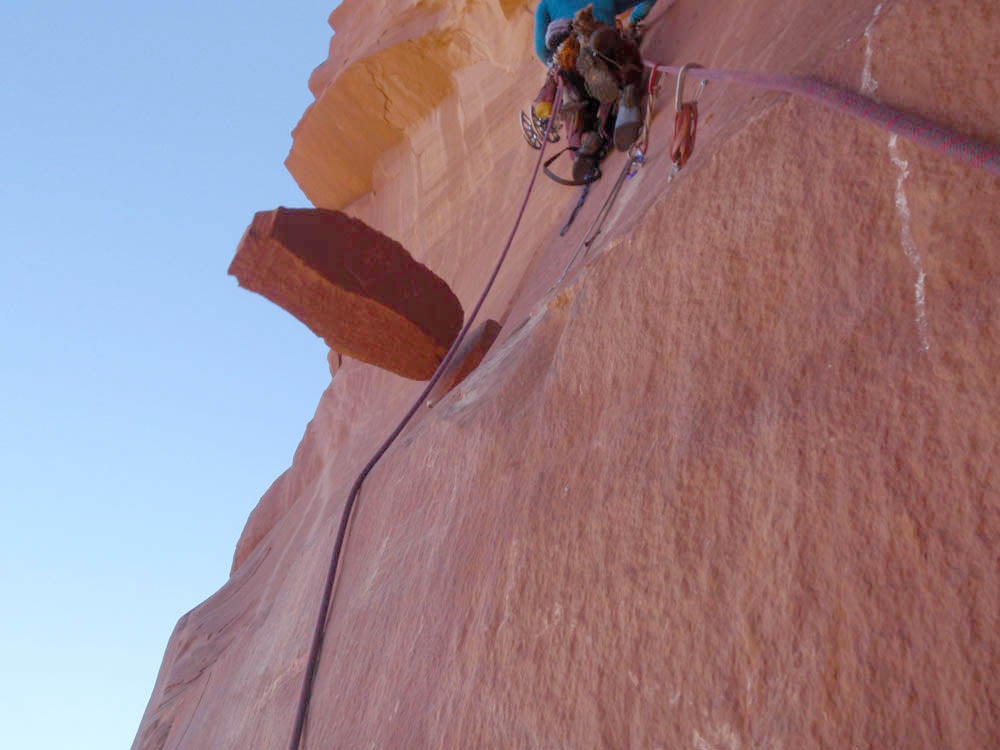 I won that particular game of Russian-roulette-sandstone-Jenga and completed what was to be a moderate approach pitch to what would later be the rest of the climb. When the fourth version of the Indian Creek Rock Climbing Guidebook comes out, you know whose name will be on the guest list for heaven.

I know some people feel that ground-up is the only way. Over the years, I've tried it all: ground-up, top-down, sideways. These new routes, they are a gift to you. The adventure of putting them up, well, that's for me.