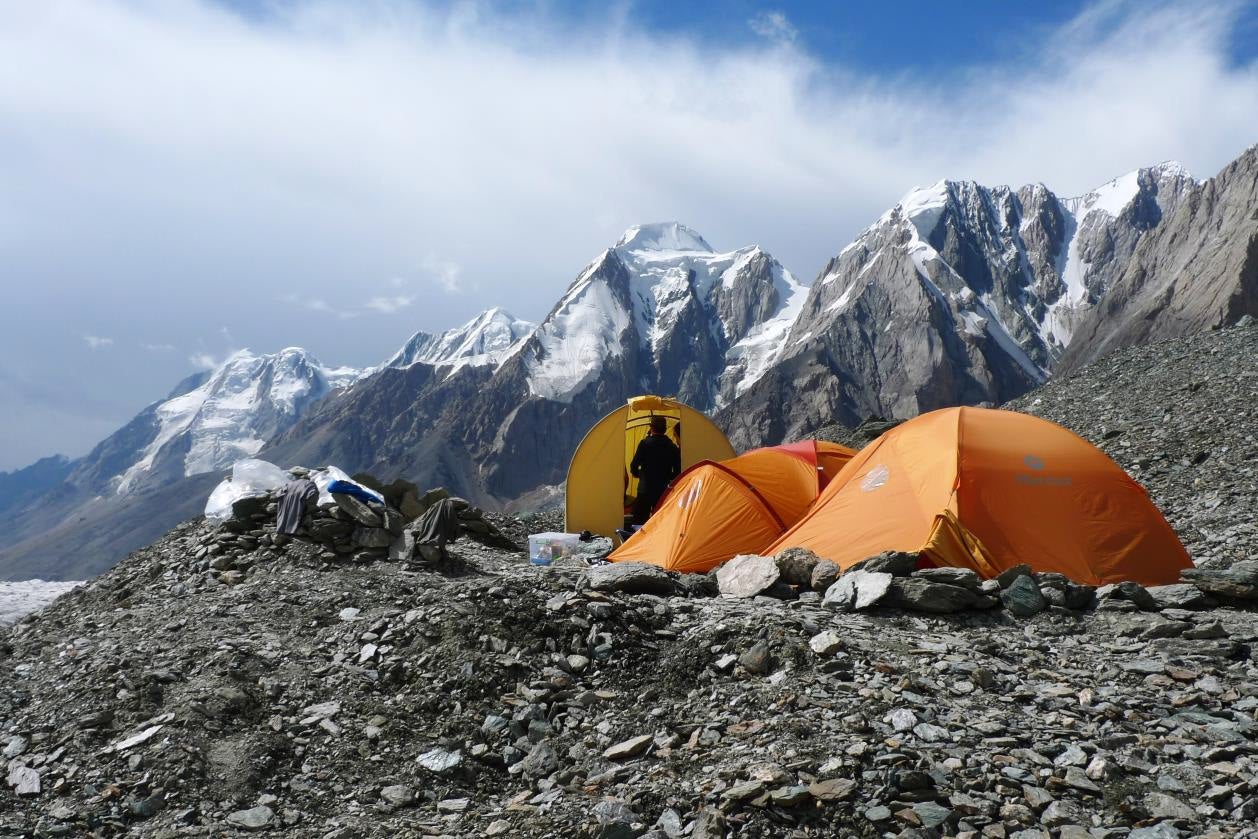 The last remaining eight eggs simmer in the pan while the familiar smell of fresh bread fills our kitchen tent. It's August 29th, and maybe it's our final day here in the Kaindy Valley. We've been trying to get flown out since yesterday. The weather conditions are too bad. Instead, we’re left with our last bottles of beer and some vodka. While Christof is seasoning the eggs, we receive a text message on the satellite phone, informing us that the helicopter will arrive in 40 minutes. We are surprised; nobody says a word. Shortly after, we hear the loud rotor noise of an MI8. Both pilots and the flight assistant smile at us—it feels exceptionally good to see other faces than our own. One final look back, and we are on our way to civilization.

We'd picked the Kaindy valley for some good old-fashioned mountaineering in a foreign country, without a guide or lots of information at hand. We chose Kyrgyzstan specifically because it's so far away, and for the foreign and exotic sound of its name. We leaned over a Google Maps printout and picked the Kaindy Valley as our exact destination. When we searched the web, all we found were a few images and very limited intel. We agreed this would be the perfect destination, satisfying our craving for the wild and the unknown. We hired a local agency to organize the local transport. Several people told us the conditions are far too unstable, the effort too great. But we were not willing to let go of our plan.

After flying to Bishkek, we spent the first couple of days running final necessary chores, then we went on a strenuous two-day drive. We had to share the cramped car with 550 pounds of gear and 220 pounds of food, bouncing and bumping over more or less paved roads all the way to the heliport in Maida Adyr. We were accompanied by Vladimir, the director of our travel agency. Having a late night beer at the heliport, we found out that Vladimir carries the title of a snow leopard (conqueror of all Soviet 23,000-foot summits), making him one of the most successful alpinists in Kyrgyzstan.

"Great mountain, but: caution, caution, and ... caution, my friends!" These were the words that Vladimir kept repeating all evening, patting our shoulders and calling one toast after another. That's when he also informed us that he would accompany us to the Kaindy Valley. In spite of the summits under his belt, he had never had a chance to go there. But he had heard of many attempted Russian expeditions, all of them in the mid-1990s, and all with rather unsuccessful outcomes.

At 10.45 am the next day, we hear the impressive sound of our transportation – a Russian-Soviet MI8 helicopter. The flight to the Kaindy Valley takes about 20 minutes. We can’t stop gazing in amazement, and we can barely keep Vladimir from falling out of the helicopter.

After unloading, the helicopter disappears and we suddenly realize that our faces will be the only company for the next weeks. Not even a glacier flea will find its way here. We are truly in the middle of nowhere.
It takes two days to set up and organize our base camp. Leveling the surface, finding rocks to build a wall for wind protection, securing the tent, and building a toilet are exhausting jobs, especially at the altitude of 13,200 feet.

The weather forecast for the coming week sounds promising. We set out for an acclimatizing tour to a 15,400-foot pass and realize how raw the environment is. Huge hanging glaciers and cornices, sharp and steep ridges with corn snow, and presumably brittle rock add to the challenge and prompt us to scout and plan our tours extra carefully. We recognize Vladimir's warnings in every cornice and every cliff. 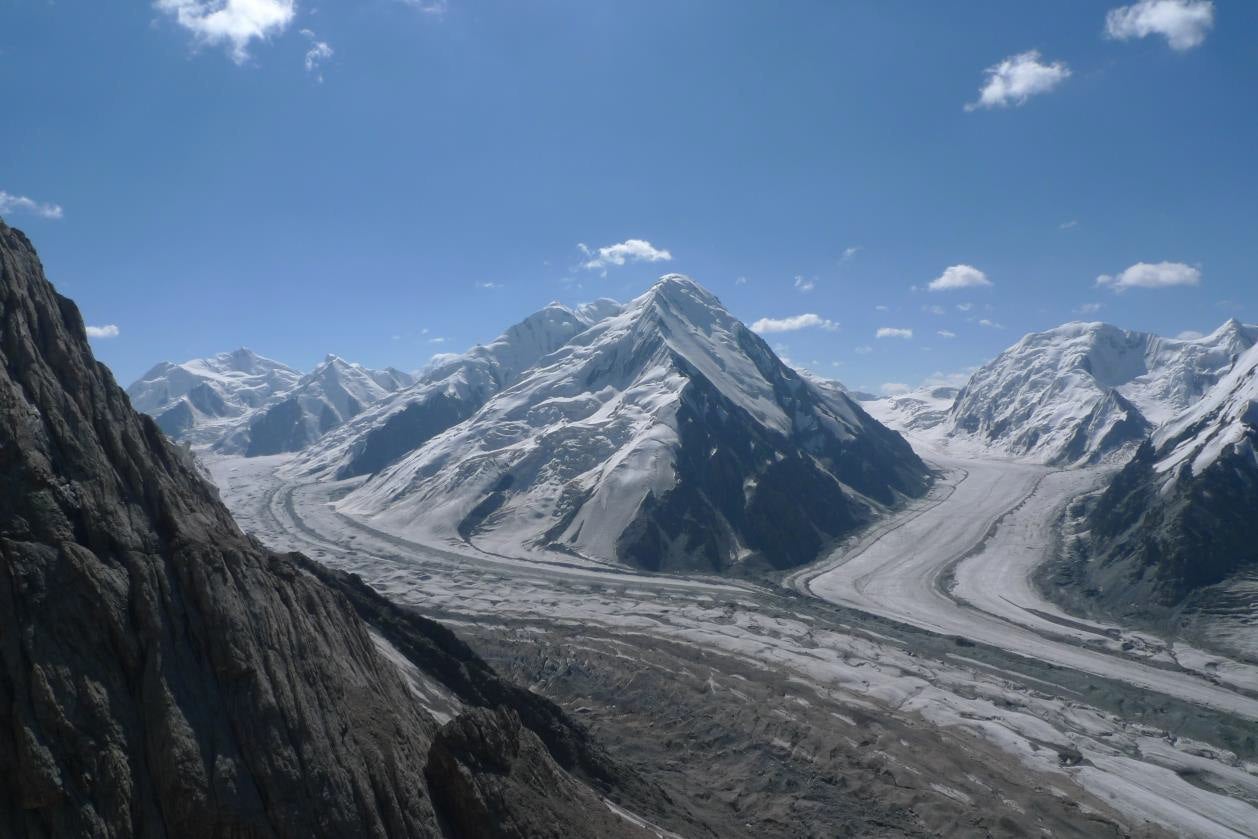 At 2 a.m. the next day, we wake up to uncomfortable cold. We eat a tiny bit of cereal; nobody speaks, and then we set out, silently farting our way into the night. Jürg complains of a slight headache, Alex of an upset stomach. After a full, strenuous hour of traversing the glacier to the access point, we decide to head toward a summit at roughly 16,700 feet. We’d scouted a potential line the day before, which seemed interesting and safe. Before getting there, we face an evil ice fall between the lower and the upper glacier, followed by a 50-degree, 1,000 vertical, corn-snowy couloir to a ridge at 16,100 feet. 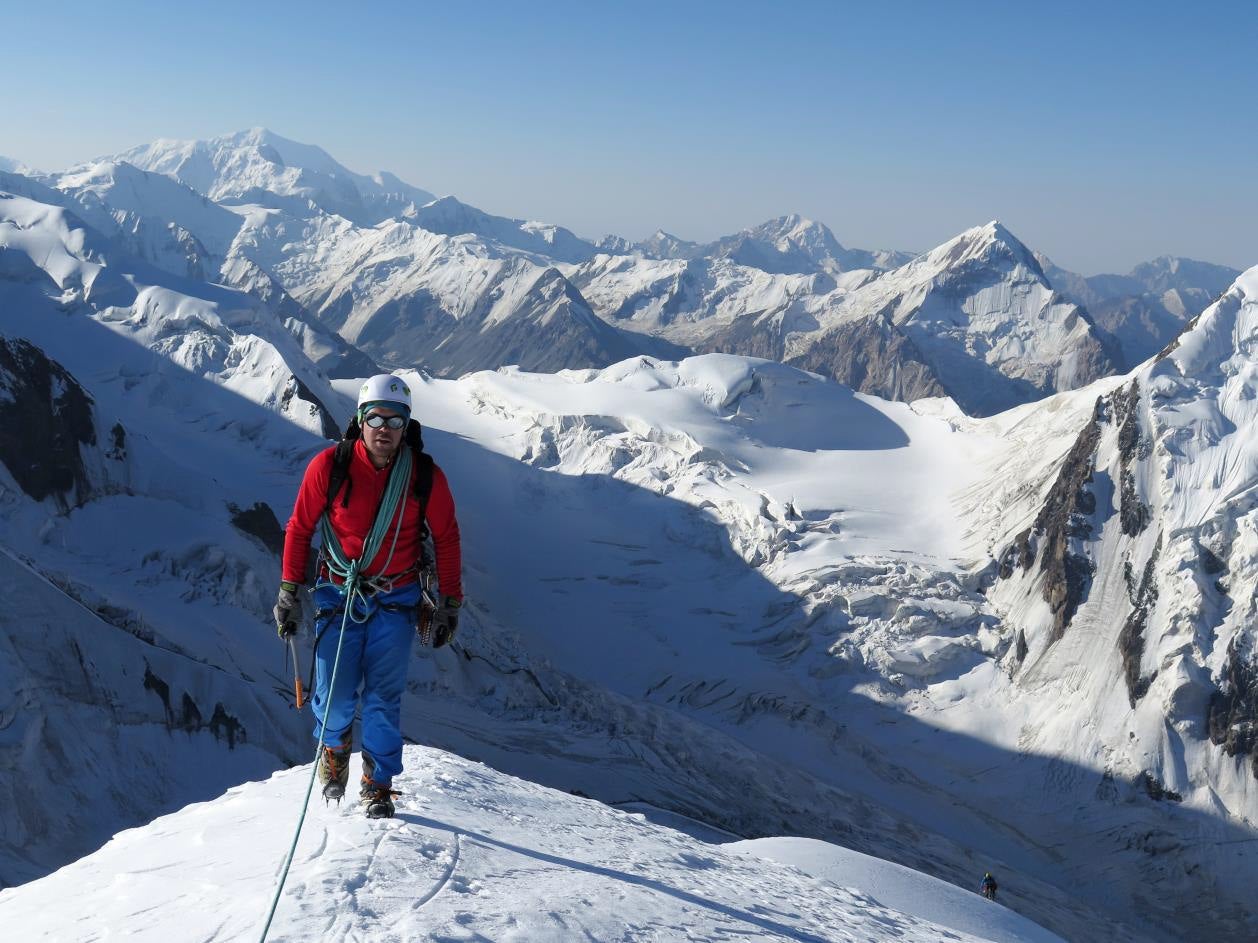 We approach the seemingly short ridge that takes us to the summit, 650 vertical feet separate us from our objective. But the cornices are larger than predicted, and we have to traverse through the steep and icy southwestern slopes. Using ice axes, we boot across several clefts and snowless flanks until we finally reach the peak. The summit cornice seems to be massive, too. Nevertheless, we feel more than elated; we’ve made our first summit, at 16,960 feet. Ten hours after we had left camp, we return to our temporary home and toast to our first summit with beer and (too much) dried fruit. The afternoon turns out to be really entertaining.

It smells bad in our tents, and we sleep until 9 am. We spend our day sunbathing, baking bread, reading and also checking out tomorrow’s tour. The weather is supposed to be perfect. Eight eyes stare at a rocky pyramid north of the base camp. This time, we load our backpacks with Friends, hexes, pegs and plenty of accessory cord, then we crawl into our sleeping bags early. 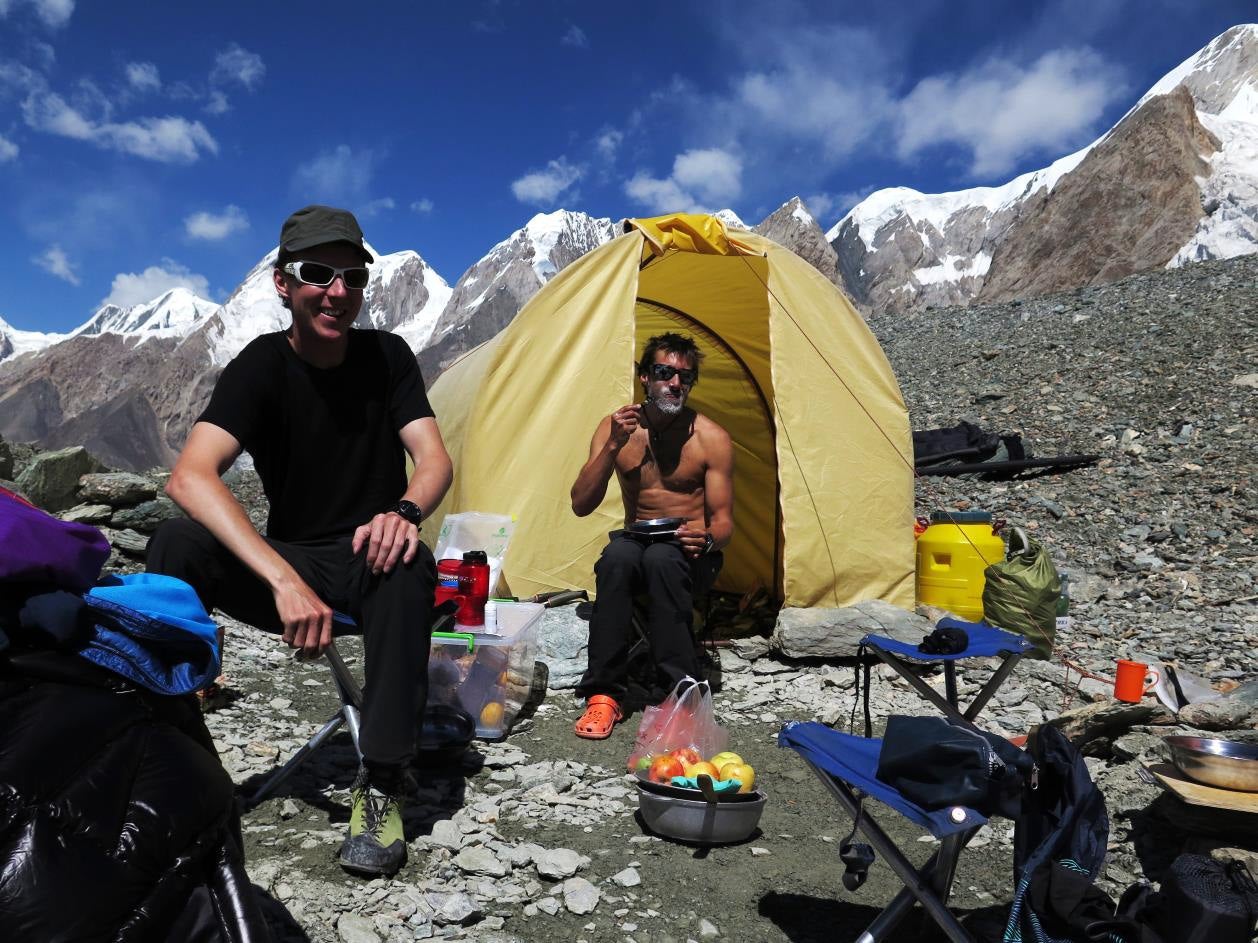 Just before dawn we stalk across the moraine and the glacier to reach our route. Without rope, we pass a debris field and reach rocky offshoots. A short break, then we rope up and proceed. We want to reach the ridge through a gully filled with debris located in the southern wall. Once we reach the col, we’re speechless: On the other side, the slope falls away sharply, and on the ridge a massive rock needle stands in our way. We discuss several alternatives just to finally realize there's no way to continue. Reluctantly, we decide to have a snack and turn around.

Two pitons and 170 feet of rappelling later, we’re back on the debris field. Next, we climb through the same southern face we came up earlier and surf down the access ramp. Our failed attempt dims our mood, but we know we made the right decision, so we return to our sun deck and enjoy the afternoon.

We’re exhausted from the altitude and decide to rest the following day. It's nice and warm, so we try to cleanse our bodies from the dirt and odor in the glacier stream—we even change our underwear for the first time. There's even enough time for a shave!

We take turns in the kitchen and come up with all kinds of culinary concoctions. Most of the time, we’re munching on cheese sandwiches. Twenty-six pounds of cheese and 30 pounds of flour need to be consumed, after all. Rising into the sky right in front of base camp is the "super mountain" as Vladimir called it. On our last excursions, we were able to spot a beautiful line following its western offshoots. 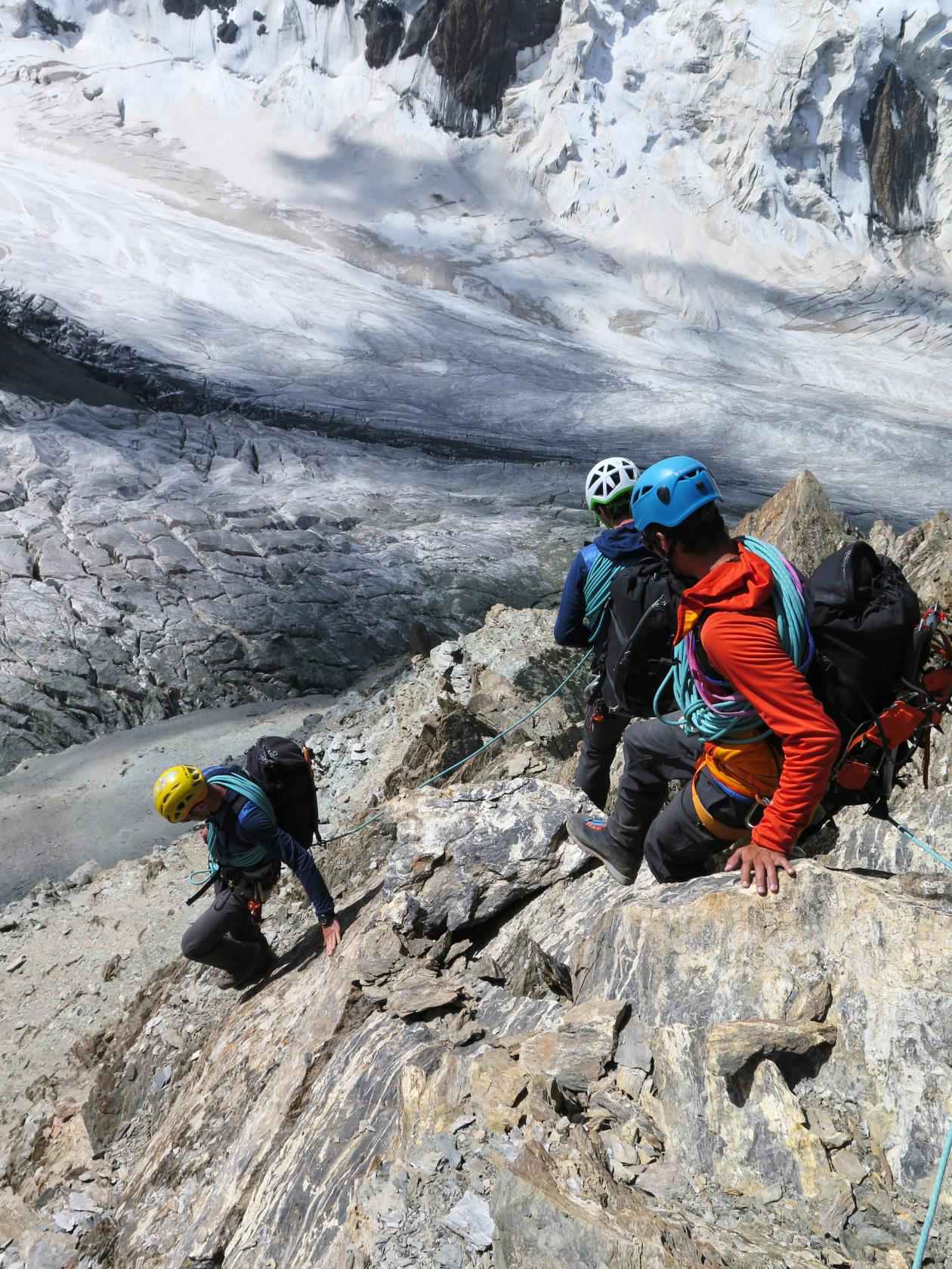 We set out early again. It's a clear, starry night and we stumble across the now-familiar glacier toward the ridge. At dawn, we put our harnesses on and start climbing in the usual teams. The ridge is stunning but brittle. At about 16,700 feet we set foot on hard corn snow and continue with ice axes and crampons.

A few ravines later, past steep and sometimes icy corn, we reach the summit ridge. A bit later, we’re at the highest point at 17,700 feet. After a 4.5-hour ascent, we can finally enjoy stunning 360-degree views of Tien-Shan's highest peaks. Below our feet we see our base camp. There's no time to waste, and we get ready for the descent. We climb, we rappel, and after ten hours total, we’re back at camp and open some beers. 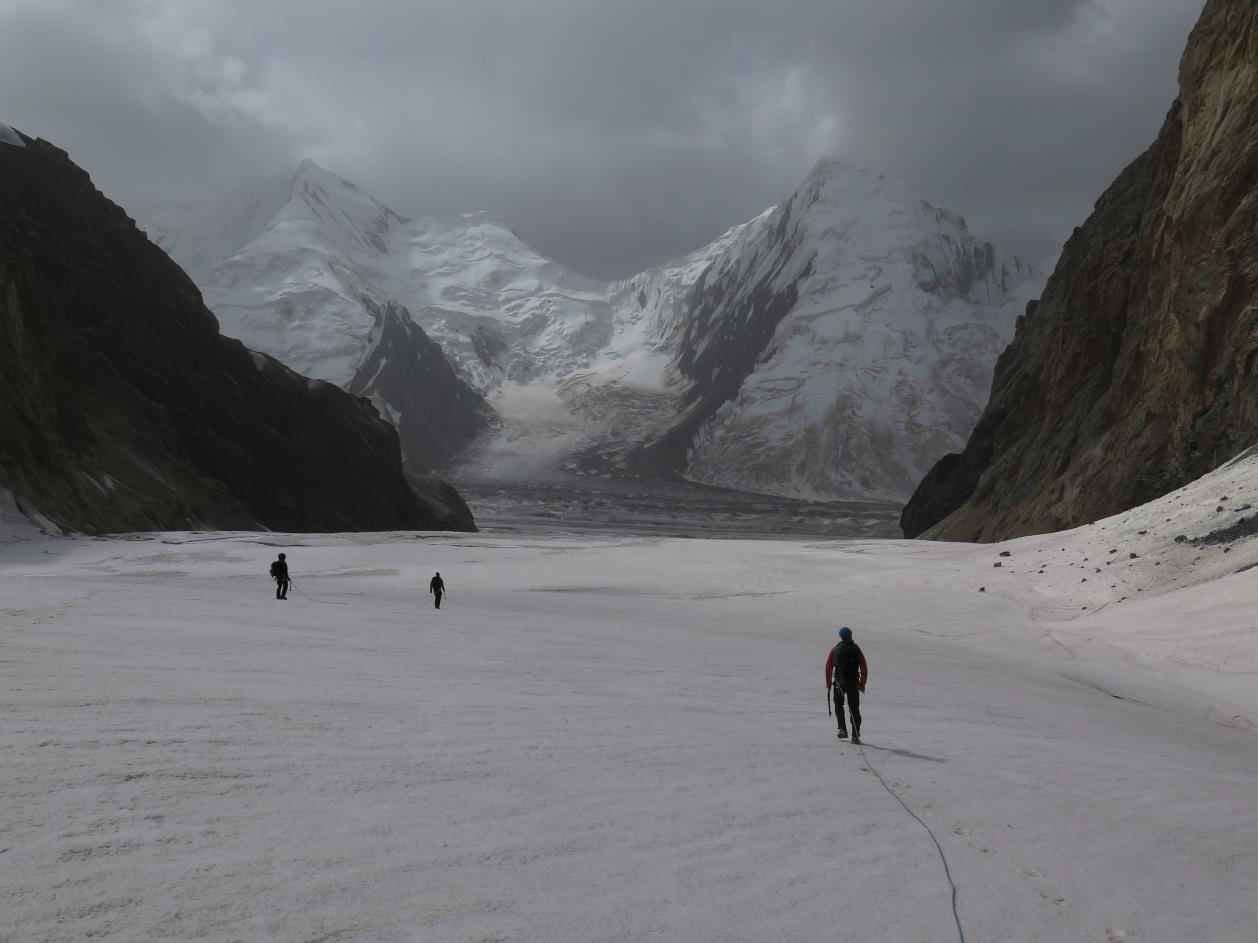 The weather forecast announces plenty of precipitation, so we decide to make the best use of Saturday morning and attempt another summit. We pick a peak, approximately 16,700 feet, northeast of our camp.
The following day the sky is already overcast. We manage to drag our weary bodies out of the tent at 5 a.m. and find our way through a huge crevasse zone. We test our long-jump skills to cross some of the yawning cracks in the ice. We suffer no losses and finally reach the foot of a steep, icy slope. The following 660 vertical feet are extremely demanding. Once we reach the saddle the cornices are huge, so we decide to bypass the ridge. We rappel an extended 4 x 160 feet and trot back across the glacier to the ice fall. Looking back, we can see an alternative access avoiding the dangerous cornices. But it's too late now. Bad weather is finally breaking, but we reach base camp without getting wet. 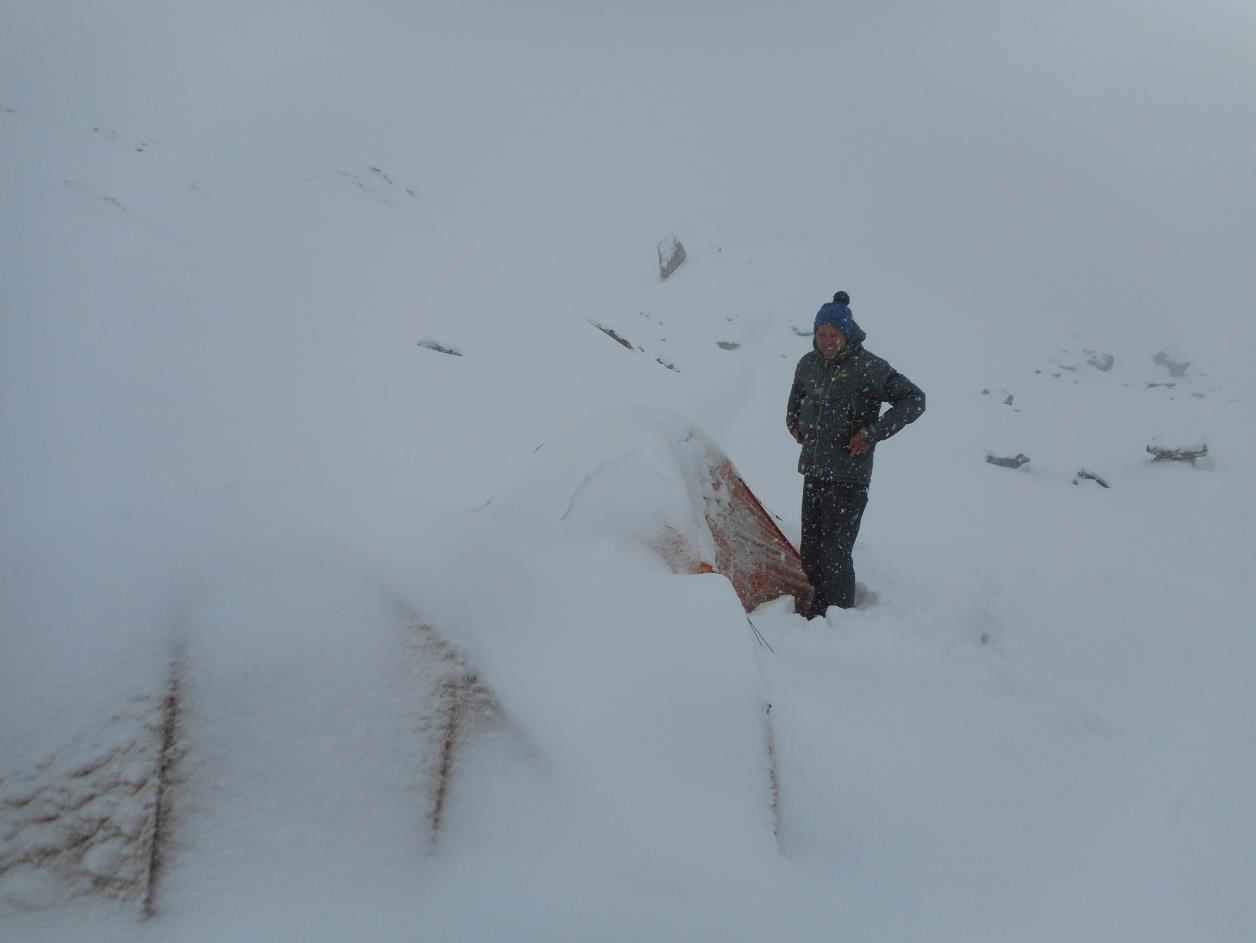 At night the area is painted white with snow. In the morning, we have to shovel through eight to 16 inches of fresh to free the tents. We play cards and drink; and we eat several variations of cheese sandwiches. The days pass and we manage to avoid cabin fever. Every afternoon the sun breaks through the clouds, allowing us to get our share of vitamin D and warm our feet.

After three days of sitting around and receiving regular weather updates, we decide to launch two separate exploratory tours in different directions on Wednesday morning, August 26. Unfortunately, neither team gets very far. After less than two hours, the entire area is hit by a sudden thunderstorm. Rappelling in a snow storm and wandering back to camp is all there's left for us to do.

The weather stays freaky. Before dusk, the sun returns. Sadly, the thunderstorm unloaded 12 inches of snow, keeping us from hiking the next day in spite of bluebird conditions. We discuss every option, but the weather report for the upcoming days is rather negative: ongoing heavy precipitation. We surrender and call helibase, ordering a pick-up for Friday, August 28. 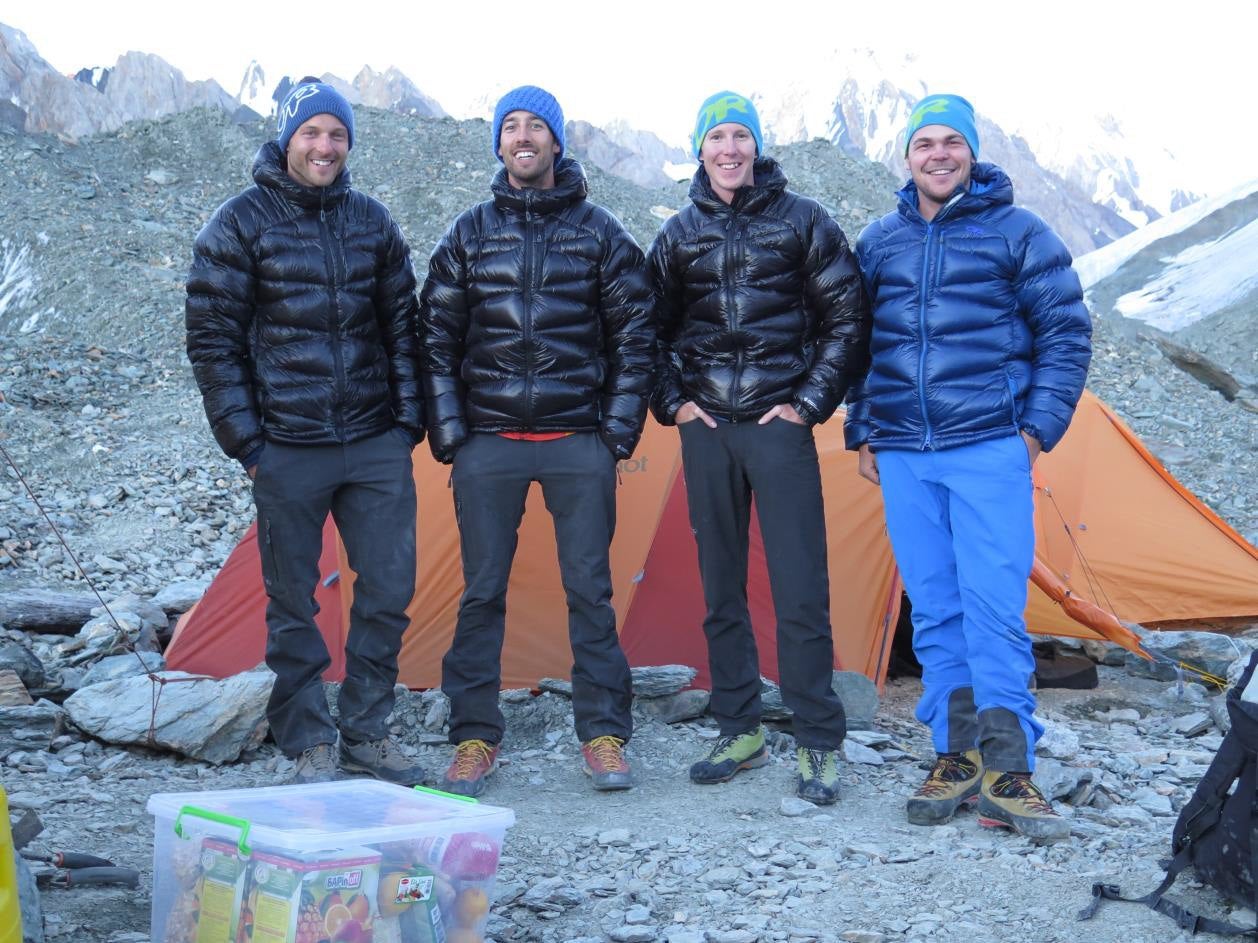 Looking back, we’re not unhappy with the outcome of our trip: We spent 15 days in beautiful Kaindy Valley, hiked a total of six days, and had two first ascents of peaks exceeding 16,400 feet. Except for a few digestive problems, we didn’t encounter any major disasters. And even our dietary plan worked out well: We consumed the last of our 60 eggs on our final day. Traveling to the Kaindy Valley, we were able to strike one major item off our bucket list, making us want to see more of it. Kaindy rocks.