Fly Fishing The Amazon Is Just As Wild As It Sounds 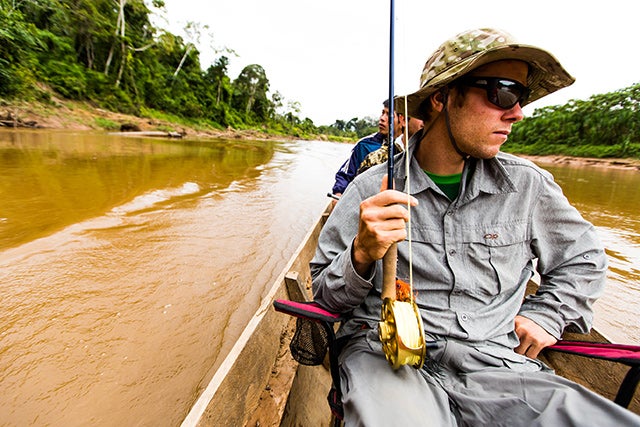 After two hours of flying in a single-engine Cessna above the Amazonian canopy, I knew this trip was going to be crazier than anything we had done before. I looked out the window, and all I saw was jungle, the kind of impenetrable stuff I’d seen in my parents’ National Geographics as a kid. I couldn’t help but think about Alaska, where my brother Neil and I had our first taste of fixed-wing adventuring and expedition camping only a few years before, and where the concept of skiing and fishing in one trip was conceived. The vastness of the jungle reminded me of the Alaskan glaciers and mountains, and the feeling of remoteness crept into my bones just as it had up north. We were in Bolivia, which is nearly as big as Alaska, more remote, more foreign, and essentially further from our reality than any place we’d been before.

We brought our skis and snowboard along just in case we could make our way to the mountains, to the source of the Amazon, but we traveled to Bolivia with really only one thing on our minds: catching a golden dorado on the fly. Going after these fish in Bolivia is almost impossible to do on your own, and I knew we needed to meet the right people in order to make it happen. I found exactly who we needed on Instagram, of all places, while searching the hashtag #goldendorado, and without really thinking it through, I was sending thousands of dollars to some guys in Bolivia I’d never met. The lady at the bank must have thought I was moving drugs.

Our new friends, Patrick and Federico, had all the knowledge about fishing in the Bolivian Amazon that we didn’t have, and they agreed to take us in. We couldn’t have done this trip without them. After months of planning, organizing supplies and handling logistics, Neil, Federico, and I stepped off the plane and onto the jungle airstrip, ready to begin our journey. For the next eight days, our pursuit of the “river tiger,” a.k.a. the golden dorado, one of the most possessed fish that swims on this planet, would be relentless and challenging, and everything we’d hoped it would be.

Traveling by dugout canoe, guided by the indigenous Tsimané people of the area, we spent two days moving upriver to the headwaters where the prime fishing grounds were located. Little sets of curious eyes could be seen through the jungle foliage as our team ascended the river.

Every so often we would stop into these riverside communities to visit with the locals and, of course, ask them how the fishing was. They were living the old way, disconnected from modern society, and it was absolutely fascinating to witness. We entered this primordial jungle to fly fish, but the cultural enlightenment we experienced had a more profound impact than any of the fish we caught.

Our first dorado came to hand on the third day, within minutes of my very first cast of the trip. The fish were hunting their prey, crashing through schools of sábalo at a tremendous rate. My 10-inch-long streamer landed amidst the feeding frenzy and almost immediately I hooked up with one of the golden beasts. After a few hard stip sets, the large hook settled into his bony jaw, and he blasted into the air. The energy coming through the line and down the Orvis 10wt rod and into my hand was blowing my mind—I was totally out of my element. The water looked like the perfect trout stream, but this was no trout. The ferocity of this animal was unparalleled to anything I’d ever had on a line. We released our first golden dorado and watched him vanish back into the pristine headwater stream, the energy of the fish now embedded in our souls forever. Our first interaction with the apex predator was short lived, and for the next five days the weather conspired against us. A cold rain infiltrated the jungle, and the rivers swelled. Not even our polarized Smith optics could help us see through the discolored water, and it seemed that our first day might have been our only chance at the legendary sight fishing these waters are known for.

Each day our Tsimané guides would prepare a breakfast and dinner of rice and meat over the fire. Some days they roasted monkey or boiled up a catfish-head stew for themselves. The eleven of us enjoyed plentiful food, drink, and laughter around the camp each day. We had no idea what was being said, and even if we’d known Spanish, it wouldn’t have helped us much out here, but the hilarity of these Tsimanés and the jokes between them in their native tongue were universally understood.

Once we’d established our base camp at the confluence of two rivers far beyond the last community, we set out on day missions upstream in search of fish. We launched our massive flies into every single piece of water we could, hoping to come upon another golden dorado feeding frenzy. I never once saw one of these large fish stationary. Every encounter happened so fast, as groups of them would come racing out of the depths and into the shallows, chasing down their prey. It was moments like this that Neil and I would have the most success, but only if we were in the right place at the right time, with a fly ready to cast within seconds. Just as fast as they appeared, they were gone. More often than not, we were left scratching our heads, pondering how a fish could move so fast in water so shallow, chasing down a baitfish bigger than most trout we catch at home. The intensity level of the hunt was extremely high, for the dorado and for us.

When the time came to begin our journey downstream to the airstrip and back to civilization, I felt as though I never wanted to leave the jungle. We’d only had a small taste, no 30lb fish, no 30-fish days, but it wasn’t due a lack of effort: we’d traveled deep into the jungle-choked headwaters of the Bolivian Amazon and made our wildest dreams a reality with the very first fish. More important than the fish, though, were the new friendships we’d made, and a sense of having discovered for ourselves the sickest fishing venue on the planet.

We arrived back in Santa Cruz, where we had a few days to clean and organize our gear, charge up our Goal Zero batteries and cameras, and try to come up with a way to get back into the jungle as soon as possible. Our friend Patrick and his family hosted Neil and I while we dialed in a plan. After deciding to delay our trek into the mountains, we were presented with an opportunity to fly out to a lowland Amazonian river on the border of Brazil, where a place called Caño Negro existed. The Caño Negro Green Forest Lodge is the only place of its kind in Bolivia, and by a stroke of good luck, we were on our way to experience this fishing paradise, to have ourselves a once-in-a-lifetime Bolivian grand slam on the fly.

Stay tuned for the rest of the story next week.