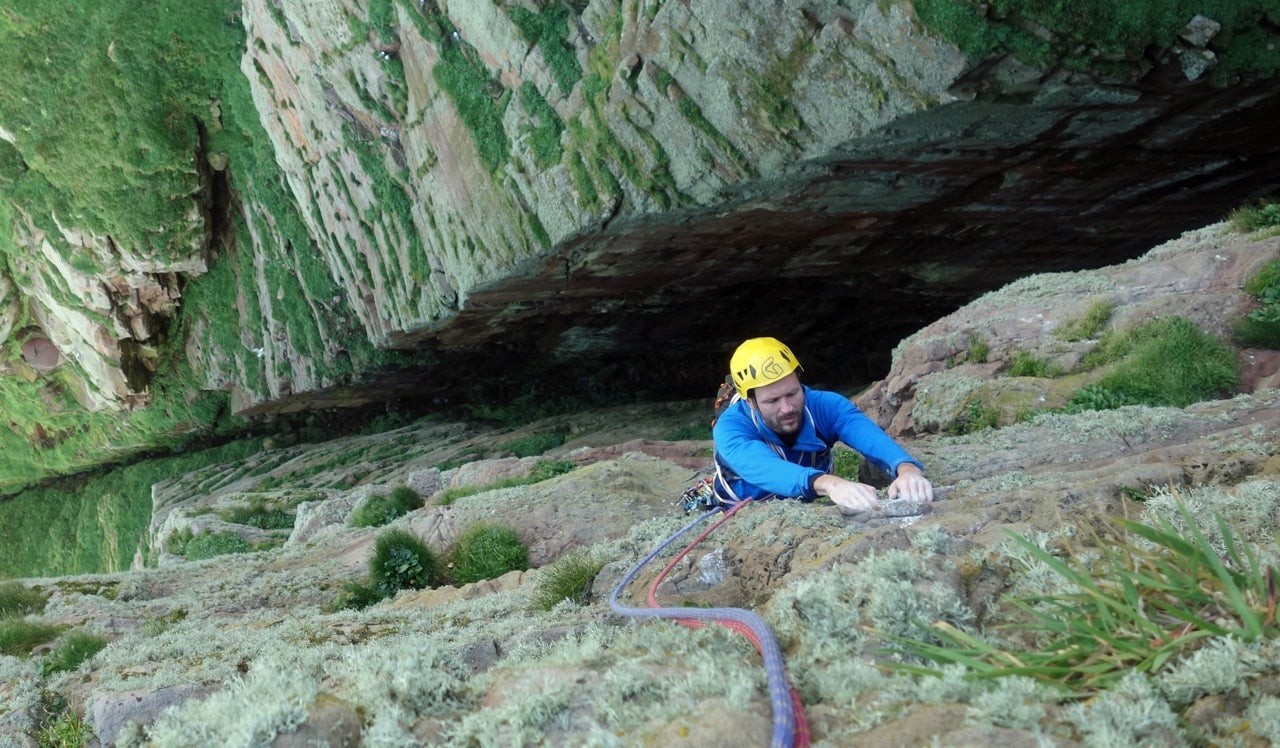 With two kids, two properties, and a busy full-time job, sometimes I don’t have much room for mountaineering. Getting into the mountains, which requires all the preparation, travelling, getting up early and getting home late. Even in little old Scotland, any mountain day worth its salt usually ends up extending into a multi-day affair. And in summer, even on the biggest cliffs, you’re typically looking at only two or three hard pitches. It’s mountaineering, yes—at least in winter with short days and wild weather—but perhaps the most accurate way to describe it is “mountaineering with a small ‘m.’ ”

But lurking up in the salty mists of the far north, only a couple of short ferry crossings and an hour or so’s drive from the mainland, there’s something altogether bigger and more adventurous. A mighty sweep of Old Red Sandstone thrusts up at the tip of St. John’s Head on the island of Hoy, facing grimly north out over the great Atlantic swell. The routes here are 400 to 500 meters long and provide up to 20 pitches, their challenge considerably enhanced by unfriendly sea birds and a plentiful supply of vegetation and suspect rock. St. John’s provides low-altitude mountaineering with a capital ‘M’—a test of skill and nerve to be savoured by the true sea cliff connoisseur. 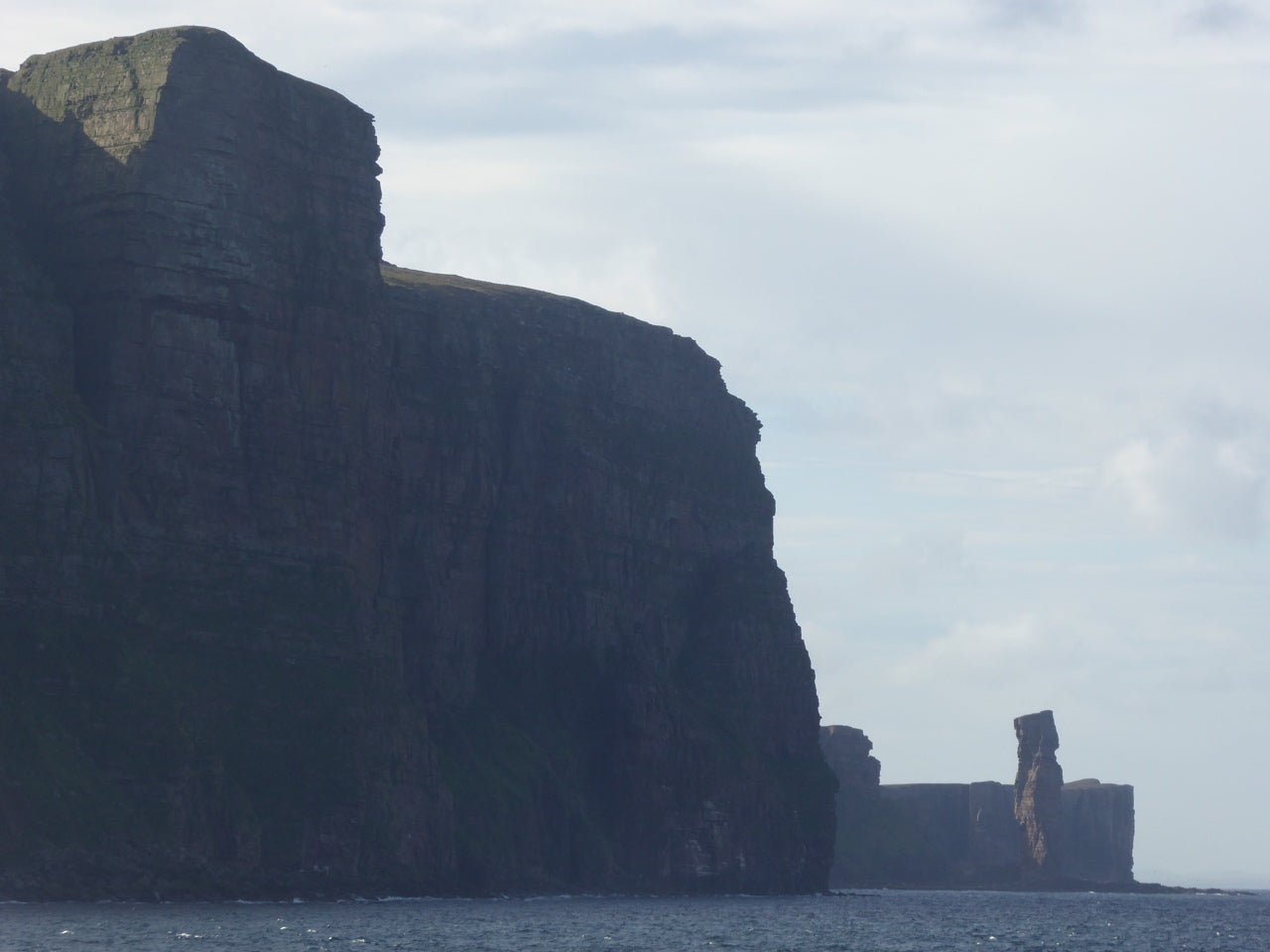 Picturing the stunning images of Dave Macleod on his incredible free ascent of the Longhope Route at St. John’s in 2011—I remember how I’d turned him down when he asked if I wanted to join him for his final one-day push. The line went along the lines of, “Sorry but that’s a cliff I really want to climb on my own steam,” or something like that. Now I feared if I left it much longer, the wisdom of age might blunt my ambitions to engage with this mighty beast. So I put the word out amongst my climbing comrades to see if any would take the bait. Many did, but nobody really seemed to want to commit. Then a cheeky last-minute curveball to Andy Inglis caught him off guard.

“Hey Andy, what do you reckon to Big John this weekend then?  The weather looks like it might just play ball? We could stay with my brother in Thurso, then get an 11 a.m. sailing to Stromness, which would mean arriving on Hoy mid-late afternoon, which in turn would give us time to chill and scope things out. Then climb the route Saturday, then ferry back off Hoy at 4 on Sunday, then back from Stromness to the mainland at 7 p.m. and home to Aberdeen about 1 a.m. I like crazy plans!”

His response displayed precisely the kind of cool and unflinching confidence I required for such an endeavor: 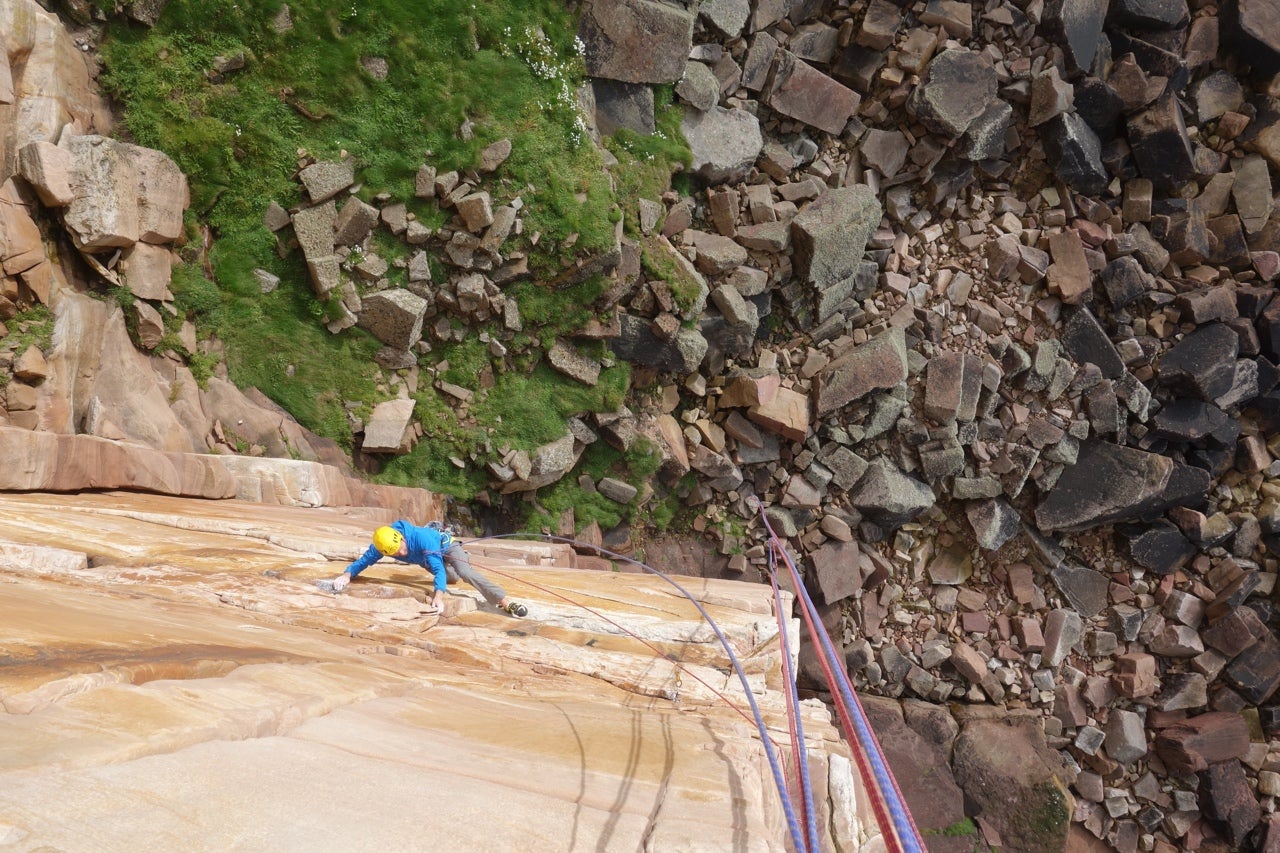 Only three routes to date have breached the main north face of St. John’s Head. The perfunctory Original Route (E3), the swaggering Long Hope Route (E7 or E10 depending on which finish you take) and Big John (E5). All of them negotiate several pitches of extremely steep grass, all are infested with birds, and all are very long, with the hard bits at the top. Unsurprisingly then the cliff has seen its fair share of epics over the years. Combinations of routes are also possible, using the many traversing ledges, but for us there was no choice to make. When a legend like Mick Fowler states that “not many routes compare,” one needs look no further: Big John it would be.

Any route on this cliff is clearly going to have plenty of exposure, but this one appeared likely to have more than its fair share, taking the soaring left edge of the main north face. There’s always something particularly intoxicating about a big arete overhanging a gully.

RELATED: An Ode To Bad-Weather Tourism

We arrived on Hoy on Saturday at lunch time, after a good nine or ten hours travelling, including an overnight stop and a brace of ferry crossings. The weather was perfect: a light southeasterly, cool and sunny. We had to sneak in a wee warm up. About halfway out the walk to St. John’s itself is the smaller but equally noteworthy Rora Head, home to the amazing-looking Mucklehouse Wall – a 100-meter sweep of gently overhanging orange sandstone. The routes here range from E3 to E7 and the steep, rounded rock is notoriously sandy. The classic line goes near the left edge of the wall before swaggering back right for a final ‘glory’ pitch up the impending headwall. We reasoned if we got on the route by 3 or 4 p.m. we’d have time to nail it before sundown at 8:30 p.m. Then we’d hide our gear somewhere off the path and get back down to camp in time for a feed and a good night’s kip before the main event the next day. Assuming everything went smoothly, the plan was sound enough, albeit our planned 5 a.m. start on the big day would mean we would be relying on a decent night’s sleep—which isn’t guaranteed on a windy island like Orkney. 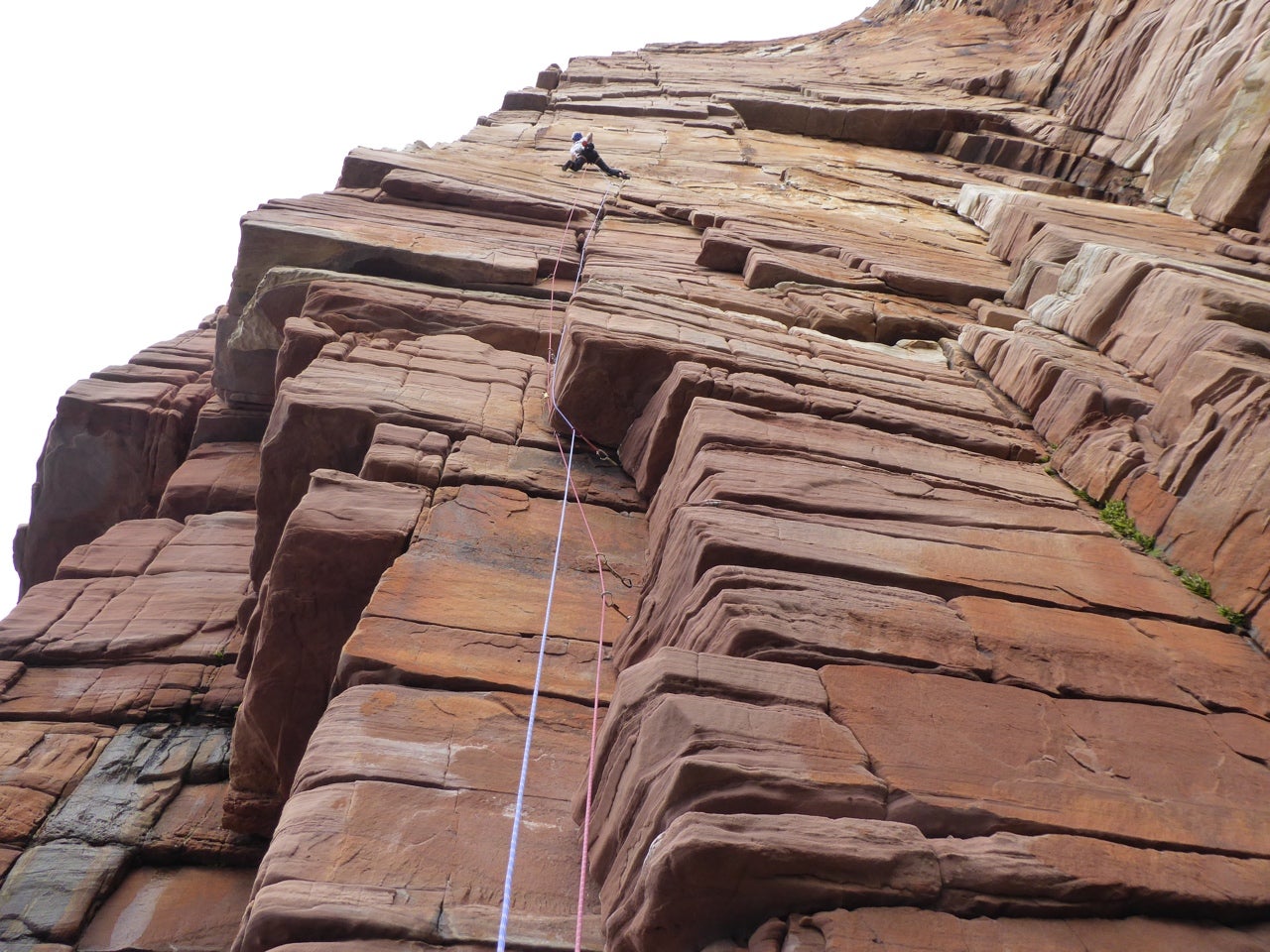 The plan worked well, although there were a few worrying moments trying to defrost forearms and fingers—because just before the final and crux pitch, the temperature dropped, the rain came on and the wind picked up. Fortunately, the steepness kept the holds largely dry, and by the time we hauled ourselves over the top of the cliff a golden sunset spilled out from across the west. We found an obvious feature near the path to stash our packs and stumbled off down the glen into the gloaming.

The wind was kind to us that night, though it did rain. We both managed a few hours’ sleep before our pre-dawn wakeup with the usual puttering stoves and forcing down breakfast. It was barely an hour before we retrieved the packs and marched past Rora Head into the cold, dull gray of the early September morning. But another hour later, we still hadn’t found the top of St. John’s.

“Christ, it must be here somewhere, man, I mean the thing is fairly bloody obvious!”

Even a slight delay at this stage could result in a disproportionately longer delay toward the top of a very long route with the crux pitches near the top. Indeed, there was the very real possibility that taking any more than an hour or so to locate and descend the steep gully system to the base of the cliff could mean the game was over before it had begun. But fortune favors the stubborn and well-informed, and by piecing together various bits of our friend’s guidance with the guidebook description, we soon found what appeared to be a small cairn at the top of a steep, slimy gully. Forty-five minutes later we were down among the seaweed, craning our necks up at the great tapering monolith that is the mighty St. John’s.

RELATED: How To Choose A Rain Jacket

I was first into the fray, which felt rather intimidating, neither of us having previously, knowingly embarked on 150 meters of 60-80o vegetation. Fortunately, the odd lump of compact rock burst through the green velvet blanket, offering an oasis of friction and stability and even the odd decent runner. Every now and then, ancient relics of petrified rope appeared, apparently growing from the very fabric of the cliff. It offered a strangely welcome psychological ballast as we forged rapidly upward through the vertical undergrowth. By around 11 a.m. we touched the continuous rock of the main upper cliff. 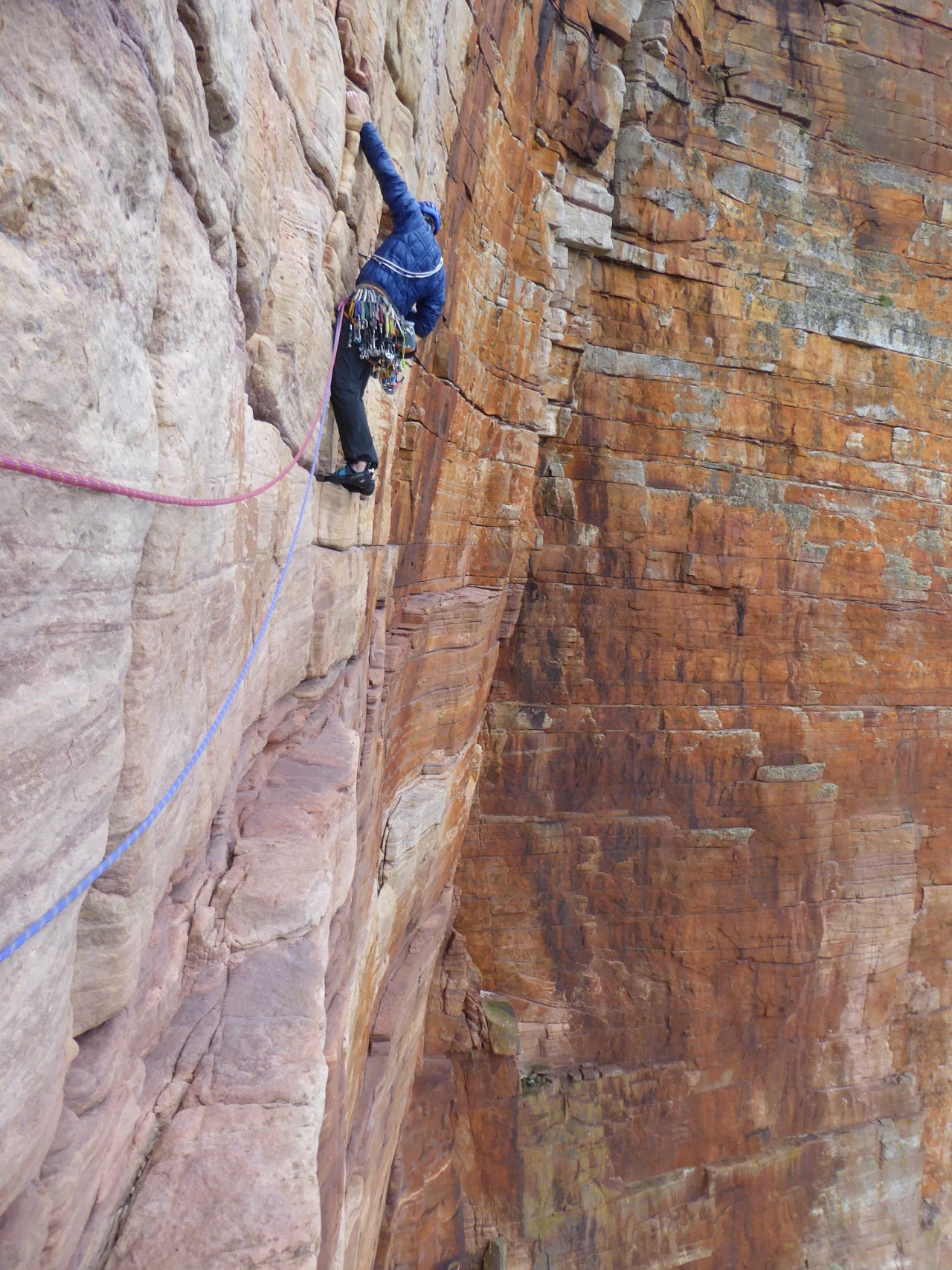 The next six or seven pitches were genuinely brilliant—an impeccably rough and delicate slab, bold in places with devious route-finding, leading to a long and airy traverse into a great soaring corner groove. The second, long pitch up this—a good 50-meter E3 5c in its own right—would hold its own on any crag, and was much enhanced by the 300 meters of deep gully yawning beneath it. Above this, an unprotected and technical wall led up onto the very edge and a series of exposed, strenuous overhangs. The second of these sported a few brittle holds which hinted at some of the joys that lay ahead. Much to my surprise and relief, it was only at this point that the familiar screams and obscenities unmistakably associated with a “man versus bird” confrontation took place.

Next was technically the hardest pitch, an overhanging finger crack in a little stepped groove, just right of the arete. Once the thick layer of luminous green lichen had been methodically removed from the finger locks, this pitch wasn’t that hard, and was extremely well protected; another brilliant ‘out there’ pitch of immaculate technical climbing on immaculate compact rock. Big John was living up to, if not exceeding, his reputation! I was buzzing, just loving it, and with only three pitches left to go at just after 4 p.m., it looked to be in the bag. We should have known, like all great climbs, Big John had kept his for last.

The pitch above was advertised as the crux. Something about a very long and exposed traverse to some dubious flakes and very poor pegs. Leaning out from my belay in an enormous, boulder-strewn horizontal break, I peered up to survey the scene. It was alarming to say the least. Most worrying of all was the fact that I couldn’t actually see any rock, just thick, green hairy lichen and the odd clump of grass. The only hope I could offer poor Andy was the fact it was slightly less steep! 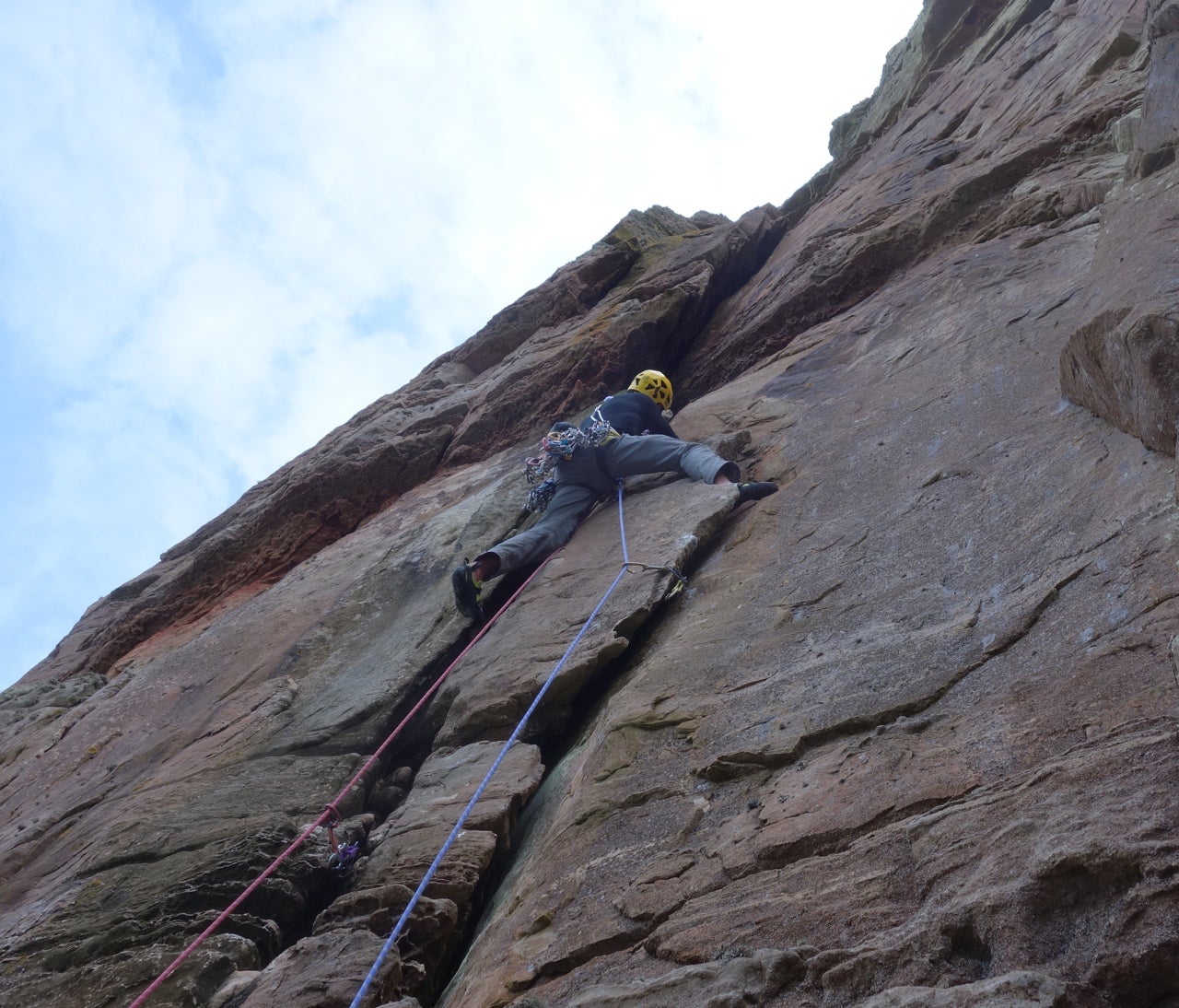 The climbing looked hard straight off the belay, and watching Andy sketch his way up and then out left along the traverse, it soon became clear that the 5c technical grade afforded to this pitch was nominal, at best. There followed several long periods of silence and a very slow-moving rope, until he eventually let out a short sharp “Whooo!” followed by, “And now I can breathe at last!” I seconded the pitch full of wonderment and curiosity as to why on earth at this point on the first ascent Fowler didn’t just keep wandering left along the horizontal break. To be fair, I have since heard a story of someone who did, and they subsequently ended up abseiling into the gully.

The penultimate pitch started out as the hardest and scariest 5b pitch I’ve every led, confirming that E4 5b is, in fact, a grade that really exists. 5b moves 20 meters out from the belay, no gear in sight and only a turf cornice above the wall to aim for. Something strange was happening, though. Big John was becoming … our friend? I surprised myself with a sudden spurt of humor, chalking up greedily before digging my fingernails as deeply as I could into the lumps of mud overhanging my head. It was over all too soon, with just a final bulge for Andy and a quick romp up a final rope length of steep grass to the top.

Sitting on top munching a face full of bagels and tinned mackerel, a crystal moon pierced the cool blue sky to the east. I thought briefly about the kids, the job and how far away all that now seemed. I thought about Big John and his cunning descent, his unknown grassiness, his brilliant pitches on great rock and his death-defying teetering on lichen-filled breaks. I thought about chalking up to grab some turf. I laughed to myself and smiled a great, wide, never-ending grin and felt a shot of hot emotion firing through my veins. Definitely Mountaineering—and with a capital M, at that.