From Climber To Mom 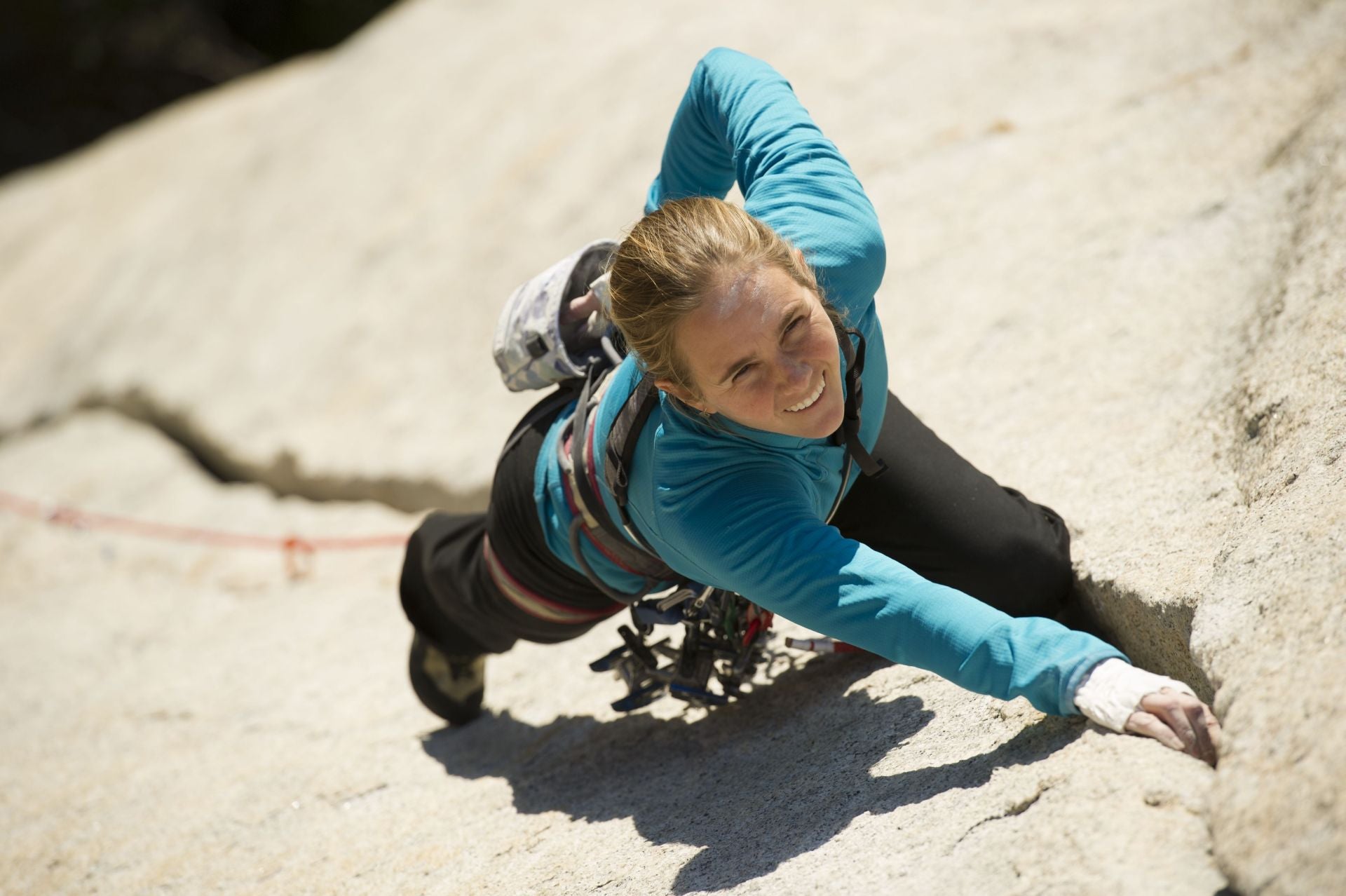 From when I was a teenager up into my 20s, I was climbing really well. I won National competitions. I racked up first female ascents. I was pushing into 5.14s. I free climbed several routes on El Capitan. And I even did the first ascent of Meltdown (5.14c), perhaps the hardest crack climb in Yosemite.

Then something changed in my body. I started getting injured more frequently. It started with a torn labrum and surgery. I was plagued with finger injuries. The shoulder blew out again. Fingers went in and out. I was struggling to get back on the hard-climbing wagon for years. Every time I got close, some injury would pop up and shut me down. And with each subsequent injury, it felt as if I was further and further away from my old climbing self. Basically, I endured a period of four years in which I was constantly injured.

After those four years, though, I found myself finally feeling somewhat whole again. I decided to take a sport-climbing trip to Catalunya, Spain with my husband, Randy, and my good friend Emily Harrington.
I was working on a route in Spain that wasn't hard by any standards—not by the standards of how I used to climb, and certainly not by today’s standards. But it was hard for me in my injury-prone state. This is why people travel to Catalunya: to find a hard project to push themselves. And it felt great to be back in that mindset of pushing myself and projecting.

When I clipped the chains on my project, I had a moment where I thought to myself,"Yes! Finally on the road back. I can't wait to get stronger and stronger and try my project again in Yosemite."
That was in February 2012. Over the next few months, I trained like I normally did, back before the four-year block of injuries. I fell back into the climbing lifestyle. I found myself getting more fit and more confident in my body. It was amazing.

Today, I’m 33 years old. I'm well aware that Lynn Hill made her legendary ascent of The Nose at age 30. Robyn Erbesfield won her 4th World Cup title at 35, Steve Hong continues to climb 5.14 today in his late 50’s. And so on. But I also knew that I've always wanted kids. It has been an idea lingering in the back of my mind since I was in my 20's. However, the idea of kids and hard projects seem incongruous—one or the other. Therefore, I’ve always told myself: "one more project, one more hard route, one more trip." In that balance between climbing and life, there actually is no balance—at least if you want to climb at a world-class level. Climbing demands so much time and energy, that you have to put everything into doing it.

As climbing is all I’ve ever really known, I was partly scared to feel like I was giving it up—something that goes hand in hand with deciding to have a kid, or so it always seemed. I also always felt that time was on my side: One day, I’d be done with climbing and I’d be confident that now is the right time to have a child.  I had this fantasy that it would be an easy decision, and that all the blocks would fall into place perfectly.
The reality was, as I firmly planted both feet through the doorway of my 30s, I saw most of my family having children. Some really struggled to conceive, taking several years. Some weren’t able to conceive at all—enduring all the heartache that goes along with that painful, tough experience. I was well aware that as you get older, having a child becomes more and more difficult.

What was once a bi-annual conversation with myself about having children soon became a monthly dialogue. Yet, a big part of me was still committed to fully “beating” my injuries, and returning to my old climbing self. I wanted to do that “one more project” more than anything. Unlike my fantasy I had in my 20s that I’d one day be done with climbing, which would make the decision to have kids feel as right as rain, in fact the reality I was facing was anything but. I was torn. I didn’t want to wait forever, but climbing is something that I just can’t shake. It’s who I am and it’s what I love.

As the early summer crept in, a few more of my friends were getting pregnant. I started asking myself, "Is another 5.14 really worth not having kids?" And the answer was clearly "no." I could't imagine waking up when I'm 75 and thinking "Wow, I'm so psyched I freed my fourth El Cap route, and it was totally worth not having a child." Though I recognized that getting pregnant might not be possible for me, as it is for so many, I wanted to know that I at least tried.

Around August 2013, I went climbing during the tradeshow at a small cliff outside of Salt Lake City. I warmed up and on my second route of the day, my chronic finger injury totally flared up. I was devastated. I truly thought that fall 2013 was going to be the season I finally send my longtime project in Yosemite. But alas, it happened. Was the universe trying to tell me something? That night I had dinner with a friend and we talked about kids. I was open and honest that I wanted kids, but I was terrified with how it would affect my climbing and my career. She reassured me that if I really wanted them, I should go for it—my climbing would come back without a doubt, and sponsors should realize the benefit of me having kids. “Think of all of the women climbers out there with children," she said. “They don't care what teenager just climbed a V17. They want to know about people like you."

A month later, I was pregnant. I continued to climb for the first 6 months, getting Randy to lead me up anything 5.8 or easier. One day in January we were climbing After 6 in Yosemite—a route that had become a favorite for me in my engorged pregnant state. I climbed the pitches slowly as I got winded with each move, but I felt great. I realized how much I love this sport, and how it’s something that I’m going to do no matter what.

I began thinking about this summer in Tuolumne; we would have a little guy with us! He would be there, hanging out at the crag while we went climbing. My excitement for having a kiddo welled up inside. I thought about one day getting to share this sport I love with him. Life will definitely not be the same, I know that my climbing will take on a new form, but these are all things that now excite rather than scare me.
I hope my "one more project" will happen, as I truly love pushing myself in the physical realm. It has fueled my entire career. But I also know that I can't imagine how much this little guy is going to add to my life. Perhaps climbing and traveling with him will be my "one more project." I know it'll be a lot more memorable than another 5.14.