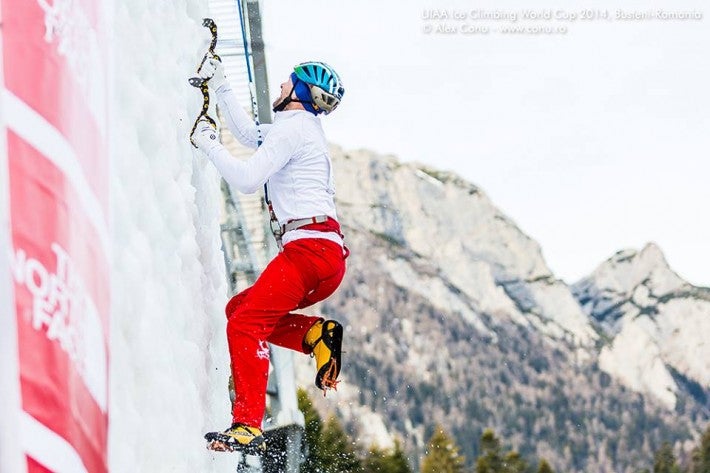 This year’s schedule for competitions is demanding to say the least. The UIAA has shoe-horned five events into just over a month, then there is the demonstration of ice climbing at the olympics, finishing off the last weekend of February in Ufa, Russia, for the world championships. It’s intense from start to finish. No time for real rest, just time to compete, climb, travel, repeat.

Korea ended on a good note.  A super good note, in fact: 11th place—my best result to date at a world cup ice climbing competition. I’ve put a lot of time and effort into my training this year and it seems like i’m on the right path. Which brings us to the next round: Busteni Romania.

This is my third time to Romania. My first experience wasn’t great, but last year and certainly into this year I’ve begun to really love this place. The people, the food, the venue, all of it brings a level of excitement that gets me super fired up. Especially the structure that we get to compete on. Wow, it’s so rad. Like climbing on a roller coaster with the back drop of a beautiful mountain range.

This year I could feel that things were different: my mindset, fitness, psyche level, all of it just felt alive. And I could feel it walking up to the qualifier route in Busteni, Romania. Then I fell, four moves up. Instantly, I was yelling to be lowered because if you fall before the first “clip” (typically you climb 15 feet of top rope and then start lead climbing above that) you can go again. And go again I did. I knew I was behind now and needed to motor. One move after another, I was racing through the route. I heard people from below yelling, “30 seconds,” and wouldn’t you believe it, I was on the final hold, clipping the final draw, matching both tools, with time to spare (barely). We had five minutes to climb the route, and I had to re-do in four. Bam—was I ever stoked!!! I couldn’t believe it!!! It was the first time that I had topped out a route in a world cup. Huge leap forward in my climbing.

Qualifying 7th in my group in Korea and 8th in my group in Romania, things were certainly changing. I just needed to keep the momentum going into the second round (semi finals). And with the second round, the route was certainly of a different style. In the first round, it was all about speed. Short moves, generally good holds…chop chop. But in the second, it was definitely more focused on power and technical movement. And unfortunately, such movement caused one of my tools to skate as I was taking the next hold, forcing an awkward fall. Despite this happening, I was still able to land myself a 13th place, another result that, with Korea’s result, was better than anything from previous years.

SIDE NOTE: So, I decided to do speed. In romania. Speed can be fun, but it’s also one of the gnarliest sports I’ve ever seen/partaken in. For real. Sharp, short dagger-like tools swinging as fast as humanly possible. Yes, fun, until you put said sharp object into leg, which is what I did.  And it nearly benched me for the rest of the season. Marc Beverly, thank goodness, just so happens to be a doctor. He sorted me out. He actually performed minor surgery on me in a gas station. Totally wild.

Anything can happen. Many of us have fallen off unexpectedly in competition, especially in Saas Fee, Switzerland, the most technical venue out of all stops on the world cup circuit. And that’s the thing with competition. It doesn’t matter if you’re the best, just learning, well seasoned or stepping into the ring for the first time. Anything can happen; there are just some things that are out of our control. Time and time again I see lots of strong athletes fall early on. In fact, I just watched my buddy, who had one of the strongest climbs in qualifiers, fall off super early in the semis. Crappy. Like I said, anything can happen.

Saas Fee, Switzerland, is a techy venue that takes precision and execution with power and a bit of guts. Always a heady stop on the circuit, plus you’re climbing at 8,000 some feet. For me, such an altitude, this time around, proved detrimental. Generally, everyone’s pace slows a little here as everyone fights the altitudeI wasn’t pumped…and arrived to my “final spot” with a minute left, which may or may not have been enough time to top out, but certainly enough time to qualify. But my body hit a wall. I couldn’t breathe. At all.  My power dropped through the floor as if someone was tying me down, holding me down, left with nothing but a pause in position.

Frustrating? Competitions can be. But here’s the thing: A) results don’t define an athlete, B) when a result is less than expected, re-group and move on right away. Don’t stew in it or else you’ll carry it through to your next “face off,” and C) I know I have a lot left to give with three events to go. Time and time again, I see all levels of athletes fall off on all stages of routes through every round of an event. It happens to all of us. You have to regroup, move on, press on, and try again. That’s competition.

As I was sitting just after my climb, surrounded by hugs from my amazing family (Yes my wonderful wife and kids, as well as my wife’s mom traveled around the world to support me in my competition journey. How rad are they????!!!), my wife mentioned to me, “Hey, um…did you know that you’re currently ranked 10th IN THE WORLD????” I  was like, What? I went immediately from kind of bummed to through the roof. All along, my goal has been to be ranked within the top 10 in the world. And wow…I was there. For now. This is long from over, and anything can happen yet. I could drop a bunch, or I could still go up a bunch. Between you and me, I’m gunning for a single digit. Is that my ultimate goal? No, the ultimate goal is to climb to my ultimate potential. From there, said single digit results will inevitably fall into place.

Traveling around the world is unbelievable. I’m traveling with my buddy Marc Beverly and we’re having the time of our lives. We’re climbing at some of the most amazing venues across the globe, we’re competing as athletes representing our countries, and we get to do this with other amazing people from around the world too. I’m psyched. Three venues to go…oh…and a stop over at the Olympics to show said world why I love ice climbing!