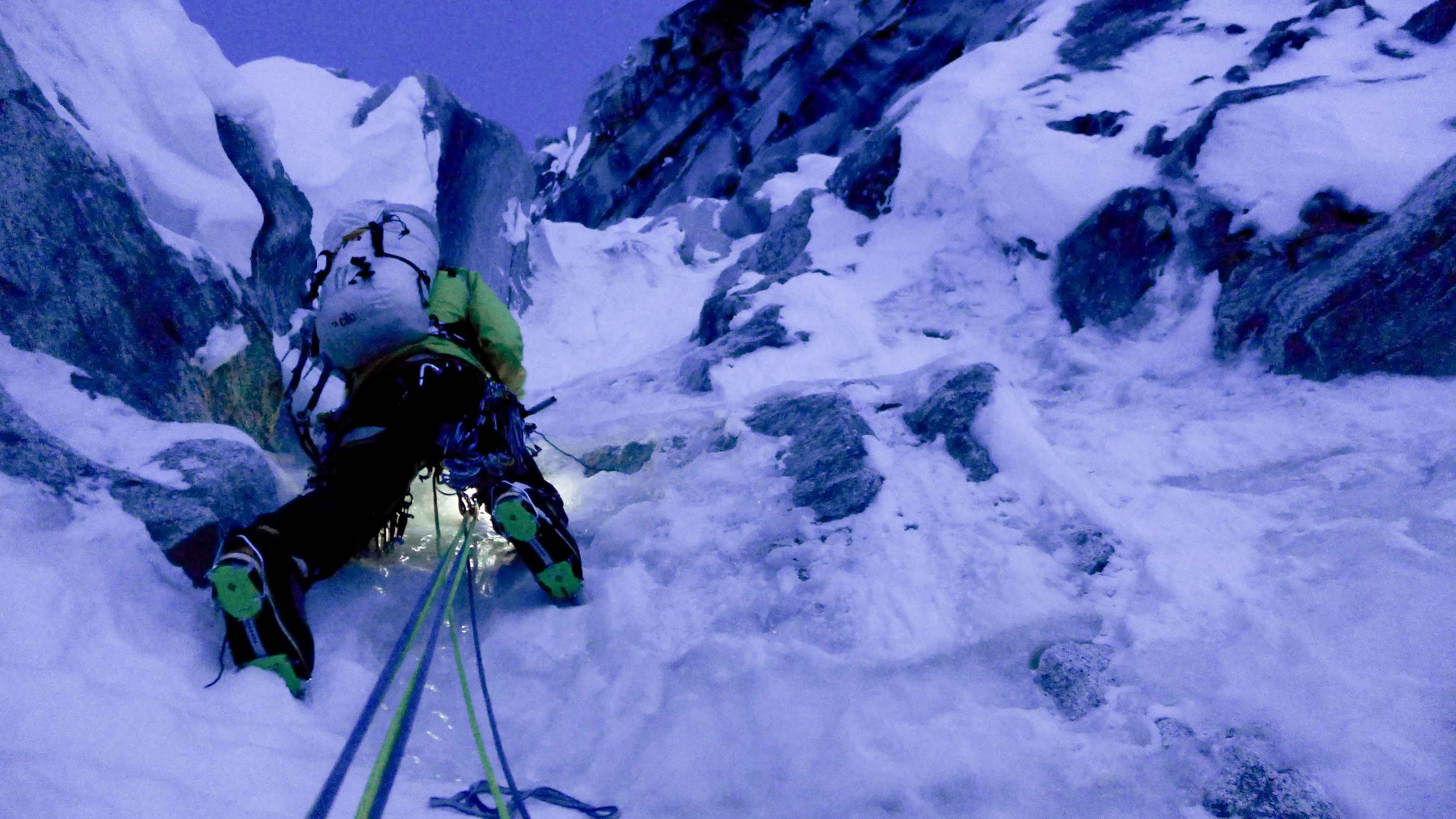 In May 2013, Graham Zimmerman and Mark Allen made a first ascent of the Northeast Buttress of Mt. Laurens in the remote southwest fork of the Lacuna Glacier. Their climb—which took 59 hours up and 8 hours down—earned them a Piolet d'Or nomination. On a mission like that, every single piece of gear counts. Here's what Graham took.

On this last trip, I had the pleasure of using the newest kit by Petzl. Having used the last generation of Quark ice tools during many of my breakthrough seasons in New Zealand and the Canadian Rockies, I was super pumped to take out the newest incarnation of this tool and I'm super impressed. For crampons I used the new Lynx and they were also excellent. For a long time I used the Darts, which are undoubtedly an excellent and lightweight crampon, but over the last few years I have been doing significantly more mixed climbing than proper ice climbing, which has meant that I tend to plow through front points and having the interchangeable points makes a pair of crampons last much much longer.

The selection of any rack is extremely route dependent. Expecting hard climbing on the NE buttress, we brought a double rack of cams to a #2 Camalot with one #3, a rack of wires, a selection of pitons and four ice screws. Alongside the hardware, we brought three double length slings, seven single length slings and five ultra-light quickdraws. For the route, this rack was near perfect. We could have gotten away with a few fewer cams, certainly, but having the selection allowed for faster and more confident climbing with minimal extra weight. As a note, two of the doubles we brought were full nylon slings. This is for use during rappelling when we use them to clip to the anchor.

I think we're all very clear on the fact that in the alpine helmets are a must. On this trip, I used the new Petzl Sirocco. Honestly, I brought an extra to basecamp since I was dubious of how well it would stand up. But as it turned out, I found it far more durable than any other foam domes  I've ever used, despite its very light weight. It is also very comfortable and the trim profile allows for unencumbered climbing.

In terms of clothing, I was as per usual sporting kit from Outdoor Research. The standout pieces on this trip were the Transonic Jacket, the newly redesigned Chaos Jacket, the layering raddness of the Acetylene Top and the Warrant Gloves.  As always, the Extravert Gloves are my go to work glove for everything cold and snowy. [Editor's note: the Transonic is similar to the new Axiom, the lightweight, breathable Gore-Tex Active waterproof shell that won Outside Magazine and Men's Journal "Gear of the Year" awards.]

The new Chaos is big, warm, well cut and super durable. I brought a synthetic parka on this trip since we were going to be climbing at low elevations and I was unsure how wet it would be. As it was, I could have gotten away with down, but the Chaos worked very well and I’m happy with my decision. The reason I would have brought down would have been for its higher compactability and slightly lighter weight. But synthetic down is nice both in terms of durability and ability to handle moisture. Both things I certainly appreciate as a PNW alpinist. If I had brought down, it certainly would have been the Incandescent Parka.

We knew we were going to be sleeping on route and planned accordingly. By bringing along a small bivy tent, in this case a Black Diamond Firstlight, along with two super light sleeping pads (XS Downmat UL7) and bags (Exped UL300), we were able to achieve a restful sleep for under six pounds in a tight little package that will easily fit into our two 30-liter packs along with the rest of our gear.

Remember: This is Alaska, the land of the midnight sun. In order to make the most out of this system, we sleep during the day when it's warm. We stay warm and rest well. Then we’d start climbing at night as the cooler temps make the snow on route safer.

The other super important part of this system is our stove. For these longer climbs in colder temperatures, the MSR Reactor is absolutely the jam. It's super efficient, especially when it's cold out and it functions as an excellent easy-to-use unit, particularly when used with the new MSR hanging kit. More than once the efficiency of this stove has saved my bacon when a route has taken longer than I expected. The efficiency of this system is once again improved by all of our on-route “cooking” only requiring tepid water.