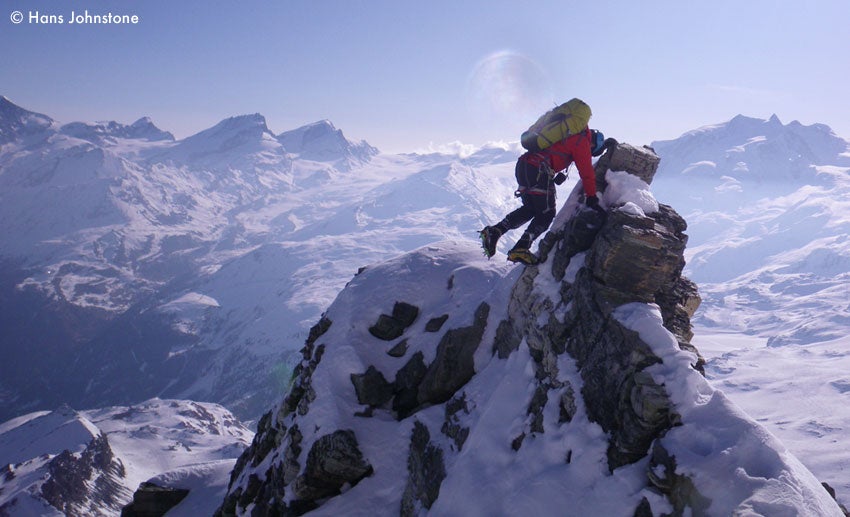 Teton mountaineer and OR ambassador Hans Johnstone is no stranger to adventure. The former Olympian started climbing at 28—late by most standards—but soon made up for it with his prodigious strength and natural talent. When not running his bed-and-breakfast The Alpine House in downtown Jackson with his wife, Nancy (herself a former Olympian), the 50-year-old father of three can often be found running around in the mountains of his backyard, putting up new routes at Rock Springs Buttress or on the north face of the Grand Teton, or skiing routes such as the Grand’s Hossack-MacGowan or East Ridge, both of which he made the first descents.

When he gets a vacation, he takes his passion on the road. In the past, this has resulted in some notable near-misses, such as his close call on the Ogre in Pakistan’s Karakoram, when he climbed the infamous South Pillar with friend Mark Newcomb only to turn back on the summit snowfields out of concern for avalanches; or in Patagonia, where, with Rolando Garibotti, he climbed most of the Cerro Torre skyline (Cerro Stanhardt, Torre Egger, Punta Heron, Cerro Torre) only to be turned back by a snow mushroom high on the north face of the last peak in the enchainment (Garibotti returned later in the season for the historic first traverse, with Colin Haley).

This year, Johnstone had eight days for a trip to the Alps. His partner? Fellow Exum guide Kevin Mahoney. Rather than just settle for one climb, though, the pair managed a trifecta that would have been respectable for most alpinists for a season, if not a career.

One thing Johnstone is not good at is writing about his accomplishments (which is one of the reasons most people have never heard about him). But the people in his home town know the significance of his adventures, and when he got back from Europe, Miller Resor, a sportswriter at the Jackson Hole News and Guide, wrote the following about their trip. We republish it here with Resor’s permission.

By Miller N. Resor: The Matterhorn, the Eiger and the Dru are iconic in the world of climbing. Each a tower of rock with razor-sharp ridges, they are to the Alps what the Tetons are to the Rockies.

Exum guides Hans Johnstone and Kevin Mahoney climbed all three on a recent trip to Europe.

“Kevin and I have wanted to climb together for a while,” Johnstone said. “And each climb was a climb we had our eyes on for a long time."

“The Matterhorn and Eiger have long and storied pasts, and the Dru is one of the most spectacular peaks in the region,” he said.

They began with the Matterhorn, attempting the north face via the Schmid Route. They climbed to 800 feet below the summit, but were turned back by approaching darkness and descended the Hornli ridge.

The entire trip was marked by “good weather and poor conditions,” which made for slower going, Johnstone said.

Next they turned their ice axes to the Eiger. They took the notorious 1938 Heckmair route up the North Face — Nordwand in German. The face is nicknamed Mordwand in German, which translates to the murder wall or murderous wall. Since 1935, at least 64 climbers have died attempting the north face.

Johnstone and Mahoney completed the climb in one 29-hour push. Mahoney said he will never forget the exhaustion of climbing along the summit ridge of the Eiger.

The Dru is a spectacular needle of rock in the Mont Blanc region, revered for its beauty. Johnstone and Mahoney climbed the direct approach of the north couloir, which was originally climbed by Steve Shea, a Jackson Hole mountaineer.

Compared to the Tetons, Johnstone said, in the Alps “the routes are longer and the approaches shorter. The mountains are bigger, grander scale, almost Alaskan.”

Mahoney had guided two routes on the Matterhorn, but otherwise it was the first time either of the pair had climbed the three peaks.

“There is no way to explain the feeling of climbing mountains,” Mahoney said, “Either you get it or you don’t.”